So I'm starting a build thread for my newly acquired 1/4 ton trailer.

It's interesting how these things happen sometimes. I wasn't really in the market for a trailer, but I like to "window shop" every once in a while. I was browsing CL in my state and surrounding states to see how many were in the area and what the going price was - dreaming that the price for one might be feasible. I found a listing for one in Palmer, TN and the seller had it listed for $450 and I'm thinking, this thing is long gone. So I call the seller and this older gent answers after about the 7th ring. He says he forgot to charge his cell phone or it was turned off or something, because he's got 17 VM's. I asked if his trailer was still available. He says, "sure is." I say I want it and I'll call him back in a few minutes to figure out payment - since he doesn't do PayPal. He says OK. I look up Palmer on the map...it's 20 minutes from Jasper, TN...and I know someone from MUD in Jasper!

So I ping Andy (radioridge) online and get a response within minutes. He says he'll be happy to go meet this guy. I offer to Paypal Andy, if he'll pay the seller cash. Andy comes back with an even easier answer. Seems he had just struck a deal at ACC Toyota for a H55 transmission in there warehouse and I spend a great deal of my weekends at ACC (working on my own junk). So I pay ACC the downpayment on the H55 and Andy purchases the trailer.

The seller had a spare tire and some booty-fab trailer hitch contraption to go along with the sale, so I cross my fingers that Andy gets it back to his garage without issue. Andy reports back after the sale that its a right piece of equipment that I found. Andy also mentions that the seller realized that he listed this trailer for far too less dinero, but Andy kept his mouth shut and handed him the cash. It had the original 7 or 8 pin deal that Andy converted to a 4pin for me and he checks all my bulbs too. Much Thanks to Andy for making this purchase possible and fixing up the trailer harness & lights!

The tires still hold air (one looks original, one looks new) and the drain plugs work after a little paint excavating. The fore section of the tub looks like something landed on it and it is bent - but not beyond repair. It has some surface rust in the typical high wear areas, but it looks like the 8 layers of paint on it have staved off major deterioration. It still has the original ID plate, but a lot of it is unreadable. I can make out the year of manufacture and the serial number.

We already had a wheeling trip on the calendar up in Jasper, before all this went down, so the timing was perfect. I would mudship his H55 and I would return from the weekend of wheeling with trailer in-tow. The wheeling was epic And I returned home with the trailer without a hiccup. I barely knew this thing was behind us. I rolls super smooth and the narrow width made it hard to see in my mirrors.

Here's one I took when we got home. 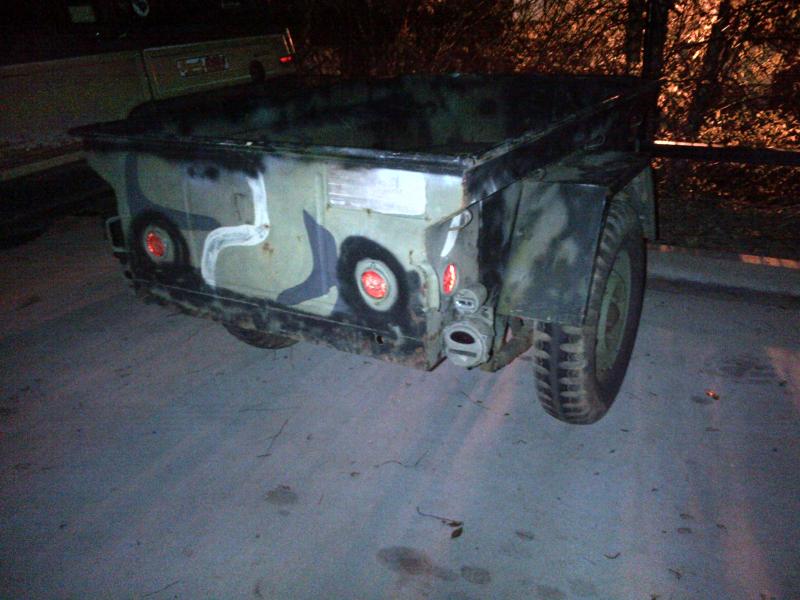 I don't really have extravagant plans for it right now. Funds are tight, so for now I just want to put some good treads on it, fabricate a lid and a spare carrier, and tag it. Maybe later on, I'll want to do the RTT thing. There are a lot of great build threads here. Here's one photo I've bookmarked for future design idea:

Heard about this place for military tires. Not cheap, but not disrespectful either.
7.00-16 Specialty Military - m. e. MILLER tire

Great aquisition, have fun with her.

Awesome... Love to see what you do with it!

Sent from deep in the mountains of Honduras using only sticks and rocks.
My favorite coffee in the morning is the one where no one talks to me while I drink it.
Owner of a '91 Troopy (The Jag) that brought our family of 4 from Honduras to Texas in 2017, a '21 Double cab, 8' bed Tundra (The White Whale) and a souped-up '18 Sienna (it's just normal, but I feel cooler saying it's souped-up). I'm also married to the hottie @The Book Worm
C

Good luck with you build and enjoy the pleasures. Look forward to seeing more of you progress

Good reference for the military tires. I have not yet figured out whether I am going with a matched set to my tow rig or back to the originals. Either way I needed rims and tires.

Don't tell the guys on Steel Soldier you are building an expo trailer They will disband you! 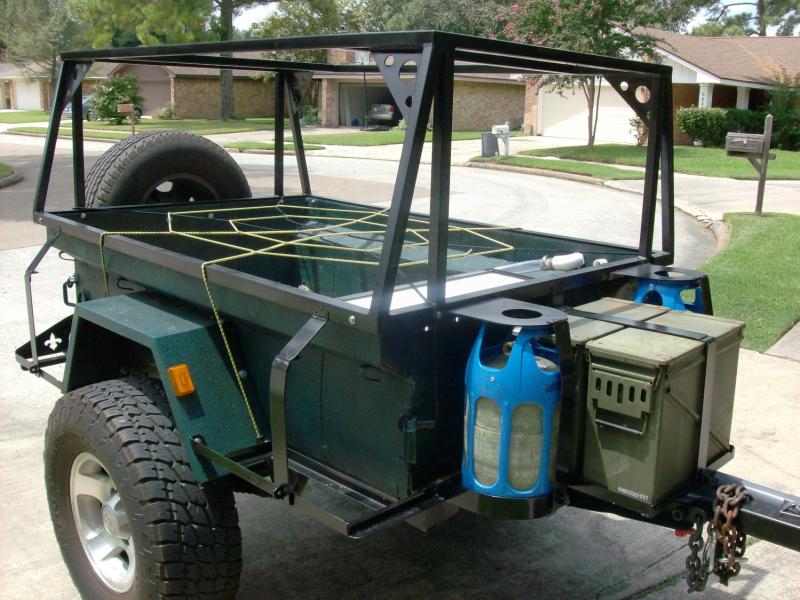 Mark Harley said:
Don't tell the guys on Steel Soldier you are building an expo trailer They will disband you!
Click to expand...

Sent from deep in the mountains of Honduras using only sticks and rocks.
My favorite coffee in the morning is the one where no one talks to me while I drink it.
Owner of a '91 Troopy (The Jag) that brought our family of 4 from Honduras to Texas in 2017, a '21 Double cab, 8' bed Tundra (The White Whale) and a souped-up '18 Sienna (it's just normal, but I feel cooler saying it's souped-up). I'm also married to the hottie @The Book Worm

Finally got some time to work on the trailer this week. Took a few days off work to extend the holiday into a full blown week off.

Started by removing the tub to inspect the sheet metal and frame closer. Not sure if this was factory or not, but the tub had a rubbery undercoating that is starting to peel off. The good news is that the sheet metal in the bottom of the tub looks solid, just some surface rest inside the tub. That rubber coating really kept the underside in great shape. The challenging part was that this coating formed a nice seal between the frame and the sheet metal so it was fun getting the two apart.

I wanted to mount the spare under the frame, so it hit me this past weekend that I could recycle the spare carrier from my wife's rig, since her 33" BFG's are too big to use the stock spare carrier now. It looked like it was going to work, here's the first mock up. It was too far forward and interfered with the kickstand so it had to be moved towards the axle a few inches. 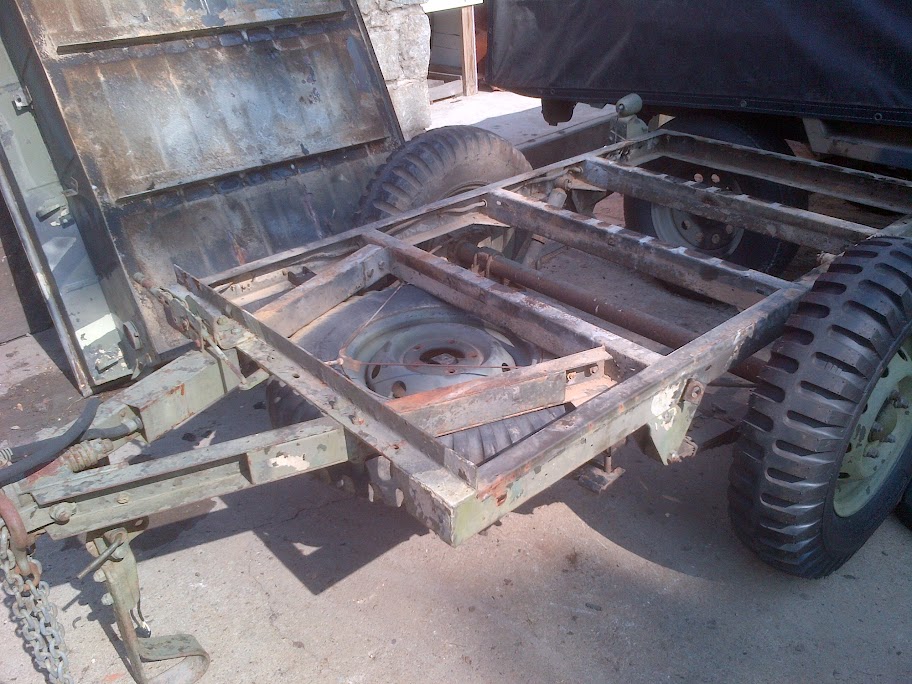 The "hub" section of the spare carrier is not really doing much, but when I tighten the strap up, the tire gets sandwiched fairly securely up against the diagnonal frame members. 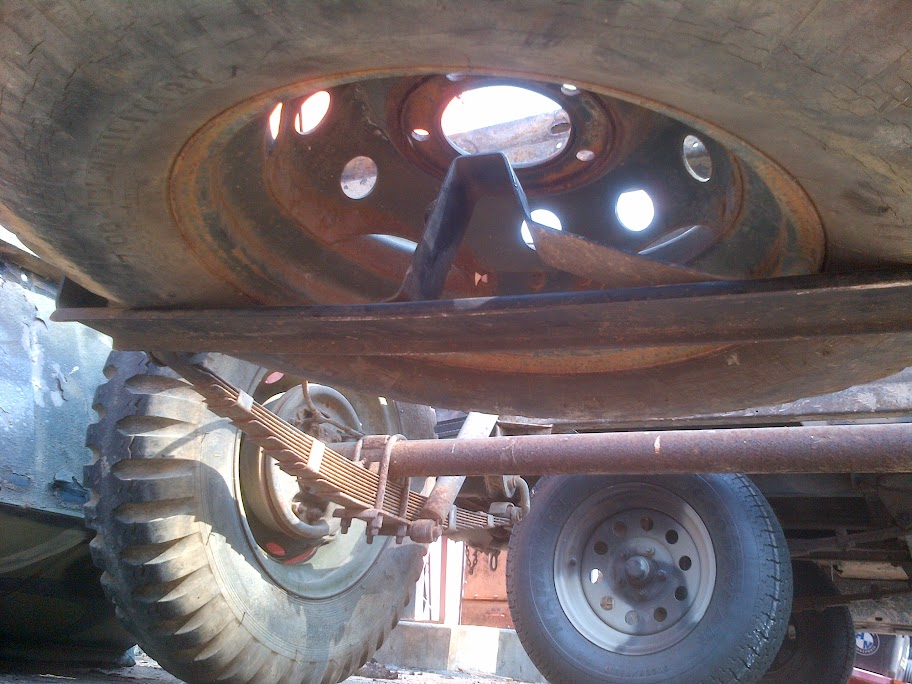 Here's how it looks from above in its final mounting spot. It doesn't interfere with the parking brake cables either. 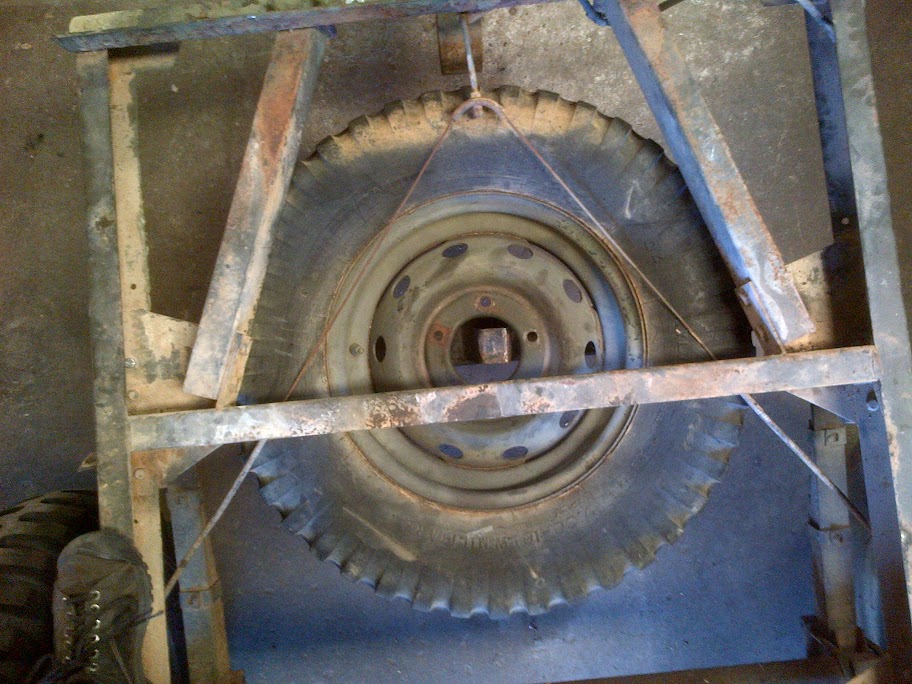 Tightening the bolt on the right draws the strap up. 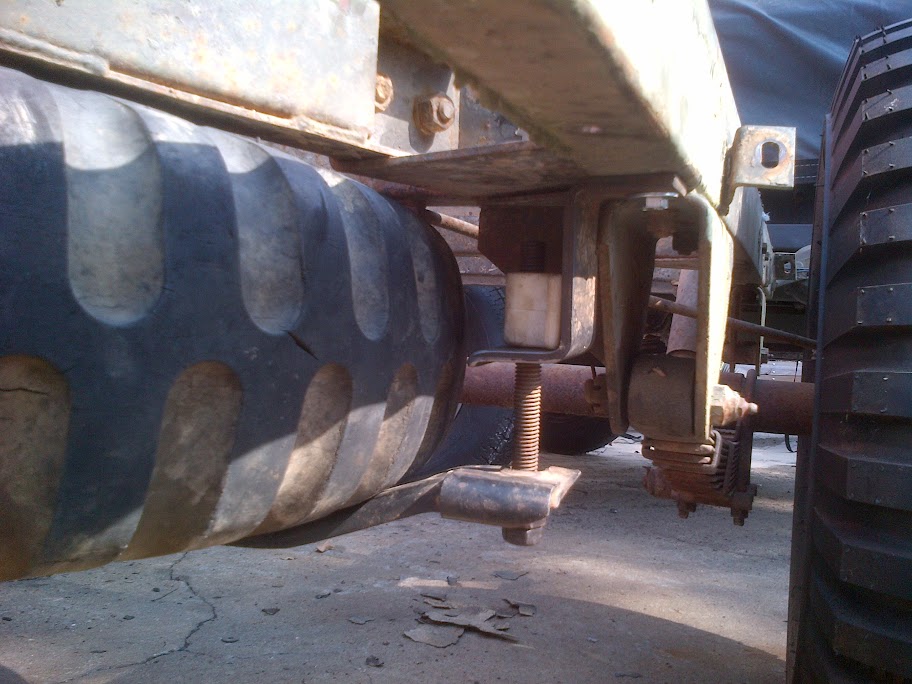 Here's the other side of the strap that has a double hinge. I simply welded some tube on the underside to accept the lynch pinch that is secured with a cotter pin and under tension of a compression spring (cuts down on slop and keeps it from constantly rattling). 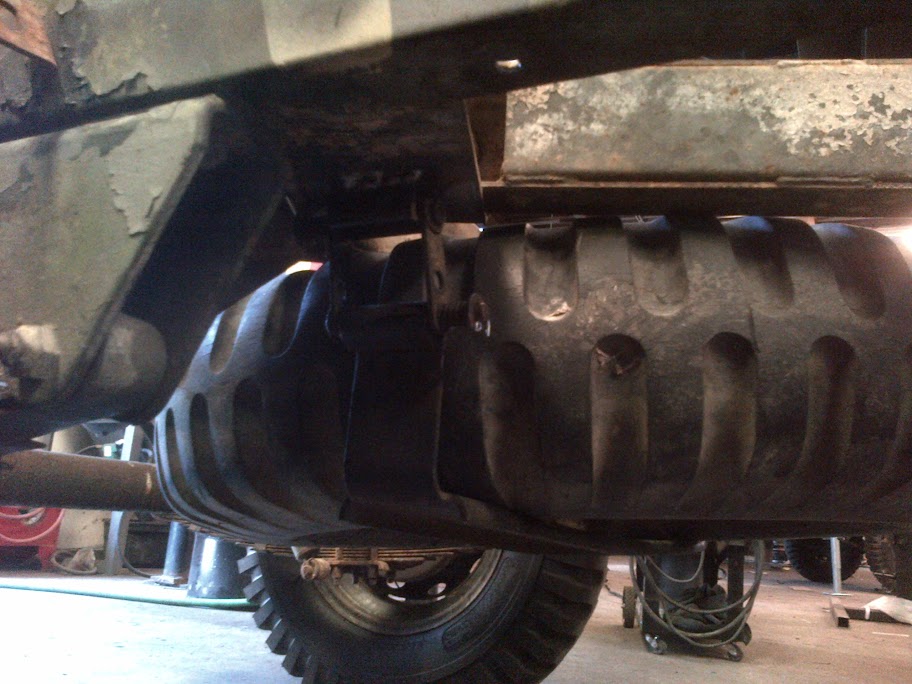 Cleaned up the articulation in the lunette, but think I am going to extend the shaft about 12" to make towing the trailer easier. Extending the tongue length will give me more room between the bumper and the trailer and should make it easier to back up. 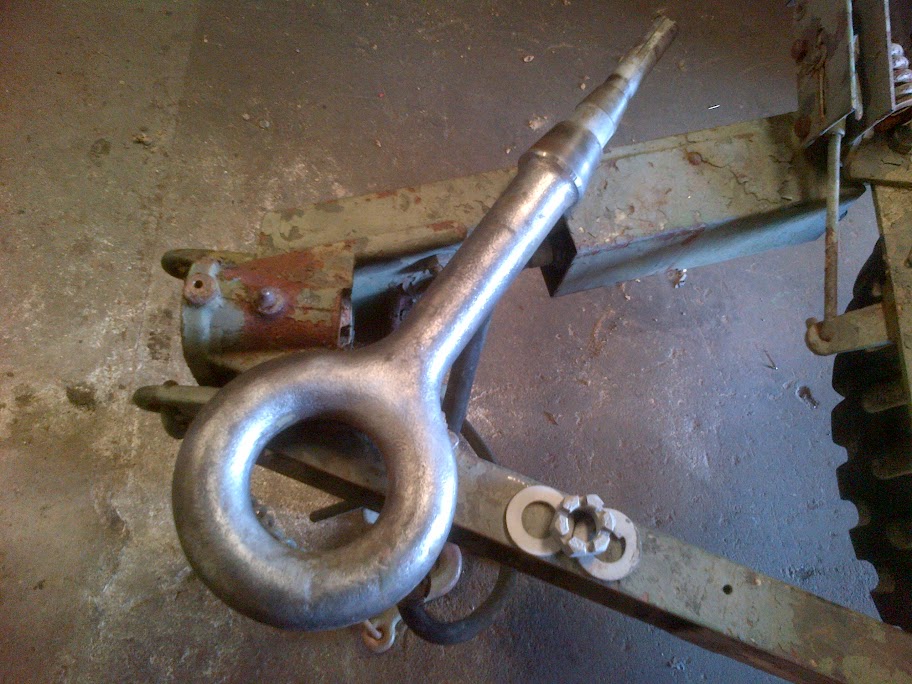 Started cleaning up the frame for a new base coat. Only got about halfway done. 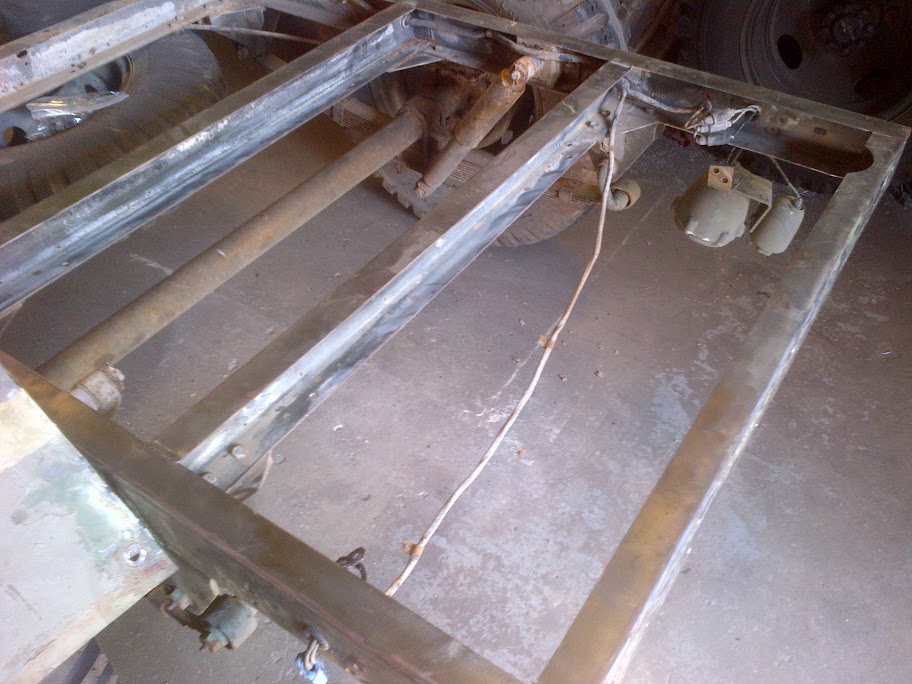 
Cleaned up the articulation in the lunette, but think I am going to extend the shaft about 12" to make towing the trailer easier. Extending the tongue length will give me more room between the bumper and the trailer and should make it easier to back up.
Click to expand...


Rick,
What is your plan for extending the lunette? I expect that the lunette is forged for strength so cutting and adding material could present problems with such a path. Or were you considering fabricating brackets & modifications to the tongue to relocate the lunette fitting the 12 inches? Good luck. Also good progress.

There's an old thread on here where someone cut, extended and welded their lunette. They did a pretty nice job.
Today's Zombie Apocalypse Threat Level is MODERATE.

Some minor progress this weekend while the tub & fenders are out for sandblasting. Got a receiver tube welded in the rear cross member. Need to finish bracing it and thinking about putting rub rails on the sides and possibly a kickstand device for the rear half. Yeah, my welds are not pretty...like a squished slug. 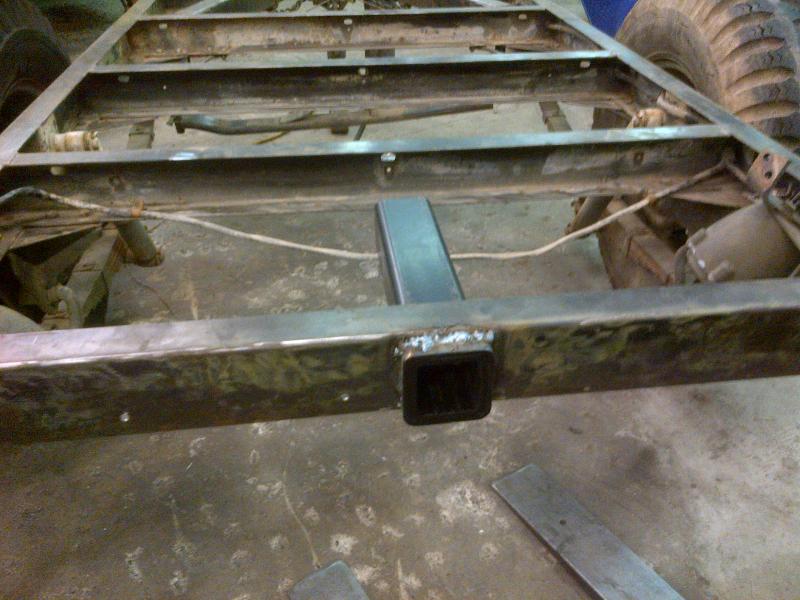 Get a piece of 2" tube that extends to the next cross member and 1" into the rear of the receiver.
Weld it all together and bridge the space. Strong and solid. That is what I did on my 101A2 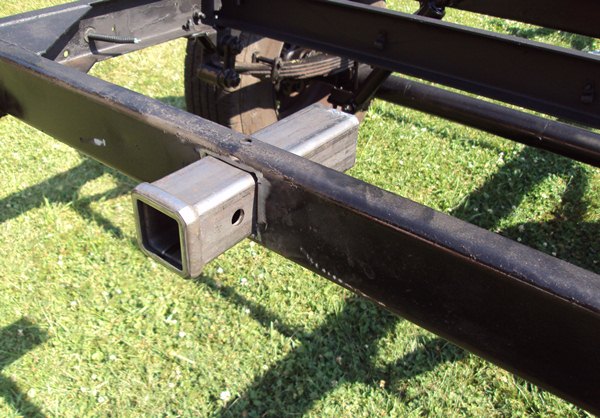 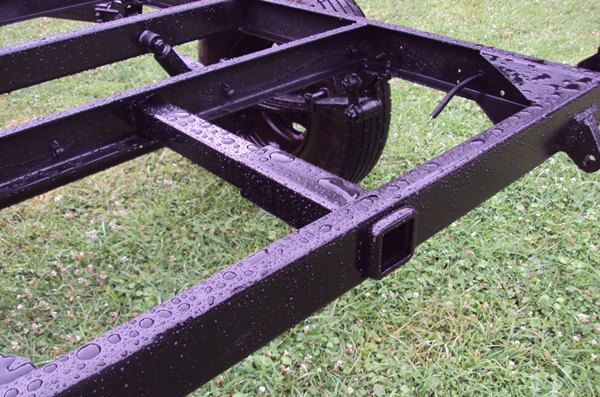 Mark Harley beat me to it again, Extending the receiver is a necessity,

BMThiker said:
Got a receiver tube welded in the rear cross member. Need to finish bracing it and ...
Click to expand...