So occasionally when I turn the key, something will make a very loud uneven metallic grinding noise, shake the truck and literally sound like something is gonna fly right outta' the engine bay. So I turn the key off and try again. She turns over just fine.

This has happened only twice within the past two weeks but it's two too many times I think.

Is it likely the starter motor teeth that are wearing and not taking to the flywheel properly? Can I fix this by removing it and doing something? If maybe, what?

I think you have it nailed with the starter teeth. Contacts/plunger didn't help mine at all.

I bought a used one off mud and put in new starter contacts and mine has been dreamy smooth ever since.

I concur, sounds like a bad starter. I had a similar odd noise after replacing my worn out original starter with a new one from Napa. I replaced the Napa part with a factory starter and the noise was gone. The part is not terribly difficult to replace. Again, an intermittent problem like you are having is most likely the starter but I would thoroughly inspect the ring gear when you have the starter out just to be sure.

Well it hasn't happened since and I haven't bothered to get me a new one because that top bolt is an absolute **** to get at! What a pain.. But because I have an LPG conversion it makes things tougher so I can only work on it from underneath the truck or within the wheel arch.

I tightened the two small long bolts that hold the canister looking part on-to the starter. They weren't really loose but I thought I'd check everything. The two main 17mm bolts are tight. Also unsure as to what the ring gear is and how to locate it?

I'll keep driving and hope for the best.

Change that starter ASAP mate! You might soon find your self stranded like me . Here are some pix how the teeth looks like when they are done. It's crappy pix but that shaft on the starter that had worn out on me over time. I used to hear that noise often during startup until it gave up on me. My guess is when it goes, your engine won't crank or you will hear a high pitch (sort of) noise when you crank the key.

Did you find any damage to the flywheel it attched to at all?
I will centrainly get around to it soon after seeing these pics.

Pricing is as follows

No damage on flywheel. For me it spun couple times as I tried to crank or turned the key and then the starter basically locked up. As the teeth portion dislodged itself from the shaft stuck itself sort of diagonally between the teeth of the fly wheel and itself (inside). Right after that called the tow truck. Then when the mechanic dude unbolted the starter, that teeth ring looking thing fell to the bottom. I got an after market starter, didn't have much choice, brand name "World Wide". Never heard of it but so far it is doing well. One of these days I'm going to get the real thing from Dan.

As far as I know our fly wheels are pretty beefy compare to that starter teeth ring. However, if that teeth ring some how spins out of the shaft when the fly wheel is in a reasonably fast motion, things could go wrong . It seems like there is enough space in there so even if that thing comes off, the fly wheel will probably kick it to the bottom but not sure.

Cool, got an after-market one from Ebay for $225, should arrive late this week or early next. I just hope she hold up until then.

To those who've done it before: How did you get that top bolt off, from the top of the engine bay with an extension socket?

It took me less than I initally thought. Maybe an hour to pull the motor out and 20 mins to reinstall. I ended up greasing the old spindle teeth because they had none and were quite 'unlubed' and reinstalling because the teeth and flywheel are in perfect shape so I don't know how or why those 2x noises happened, haven't heard it for 2 weeks now and have a spare starter for some day.

It's possible/likely the starter contacts are sticking and the starter is continuing to run after you start the truck.

Thanks Tom, but I doubt it in this instance.
On the 2x occasions the fault occurred, I never even so much as turned the engine over. The noise happened as soon as I turned the key and then I stopped. 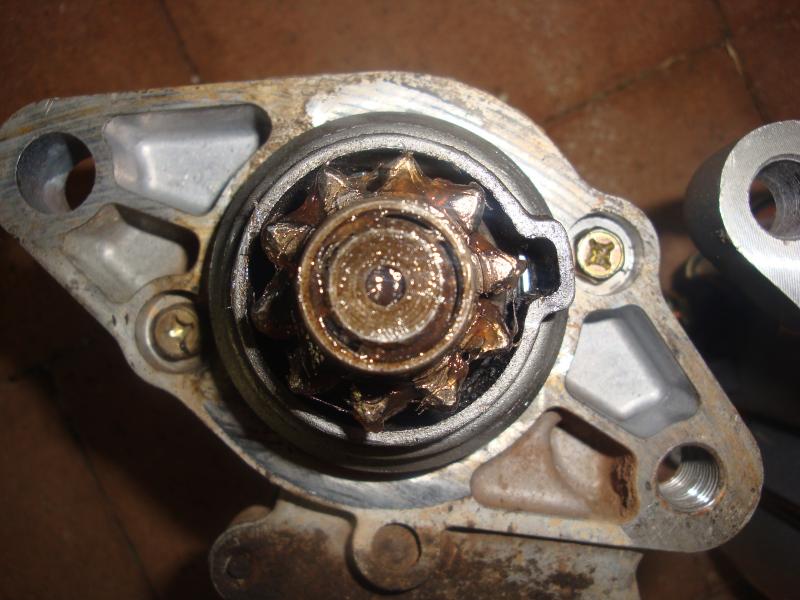 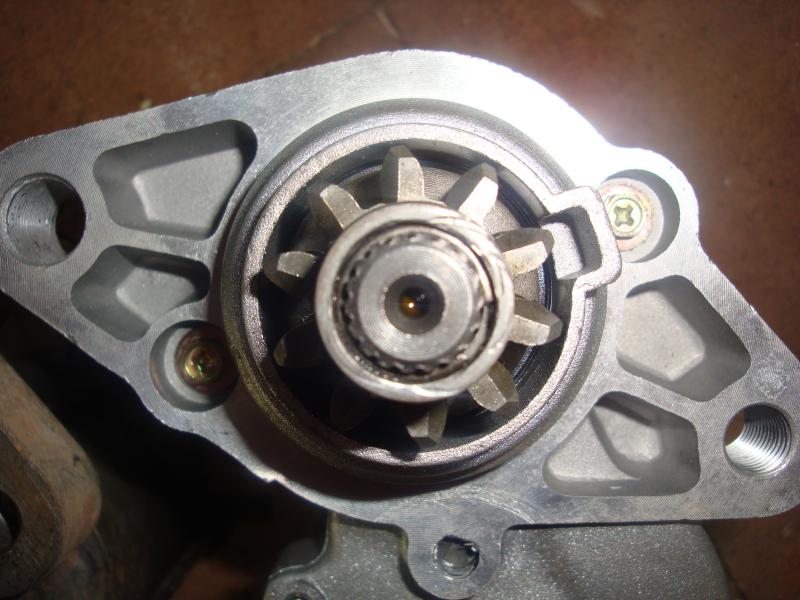 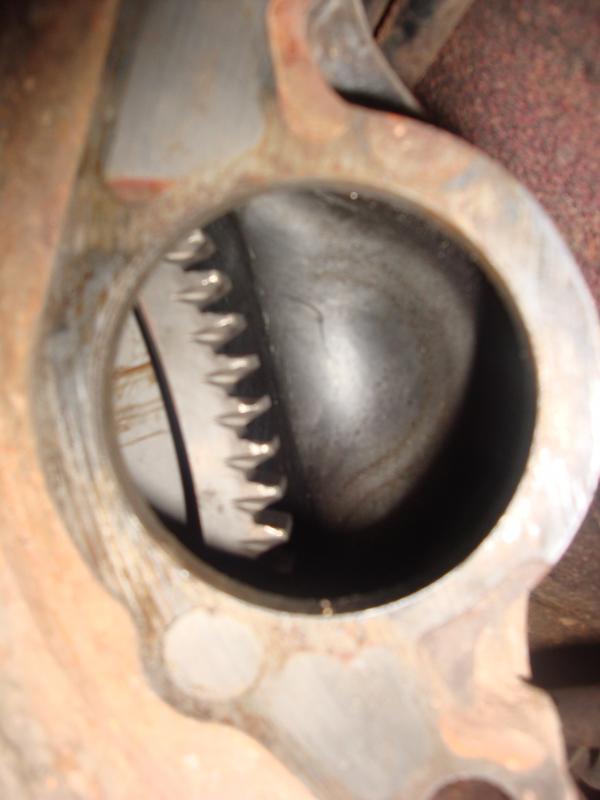 The aftermarket pinion teeth look more beveled than the OEM pinion, but then the flywheel teeth look beveled so maybe beveling the pinion teeth that much is not required?? I've had the grinding noise a couple of times due to my worn out contacts I'm sure, like the solenoid was getting intermittent power in rapid succession so the pinion was shooting in and out a few times I guess.

Yea, definitely pretty different..
I just hope that the aftermarket one will work fine and not wear the flywheel one day when I go to install it.

Did you find any damage to the flywheel it attched to at all?
I will centrainly get around to it soon after seeing these pics.

Pricing is as follows

I had the same problem last year when the weather got cold. I replaced it with a reman oem from toyota. I don't remember paying $560 for it though.
I remember it being something more like approx. $235.
No more issues eversince.

I had the exact same problem as OP described. For three years it did it only in the most cold days and only in the morning. So I said, Mah. It works.

Then it did it once when the car was warm. So I said, hmm. And ordered a Toyota one from cdan.

It sat for a month or two as the weather warmed up and I was more motivated to replace it. Then it did it one more time when the truck was warmed, and I was about to go two weeks into Moab.

I replaced it that afternoon. Not difficult at all. Noise is gone, but I reserve judgment until we hit the cold weather again in January February.

BTW, I did the plunger and contact three or four years ago. And for the best of my recollection it did that noise before and after the plunger was replaced.

So my conclusion, for what its worth is this:
If the contact stick, starter continue to run after releasing the key, change the plunger.
If you get the metallic noise when switching on, especially if it does it in cold temp but not in warm Temp, replace the starter and don't bother with the plunger.

To be honest, I wouldn't bother with the plunger again. If the starter is 10 years old, I would just replace it vs. mock around with the internals. It just seems that the plunger replacement helps for a very short time before something else fail.

I'm definitely not the starter expert, but having just taken my 2.2kW apart I found that much of the grease on the clutch assembly and reduction gears was either dried up or had been slung away from where it was needed most. Also noticed that the ?reduction gear with a nylon bearing and it's five loose roller bearings in the center had been wearing a groove into the case it sits on. I'm thinking that we should consider servicing the clutch assembly (clean and regrease) at the same time we replace the contacts, it's not that much more work while the starter is on the bench IMO.

UPDATE** The brushes are worn, happens with all starters over time. The Denso looks like a quality unit! May trade it in or repair, not sure yet.

QUESTION** My ew after market starter works o.k, but the teeth are a little thicker, I'm not sure if this if because the old ones teeth are just worn or not?

Took the original to a shop yesterday and compared it to another more expensive after market one they had there and the teeth on that one were also lrger and looked te same as the ones on the starter I just installed thats making the noise..

1/ Are my 13 year old starter pinion teeth most likely just worn down? Thats why it sounded so nice and quiet/sooth?

2/ The guy at the 4wd shop told me that this scraping noise I am experiencing is normal when installing a fresh starter motor: I told him I was considering purchasing another starter because as the engine fires up and I release the key, the starter I have installed at present grinds on the flywheel for about 1/3 of a second while it is retreating back inside itself. Is this really normal with all new starters? He said the teeth need some time to wear down.

Sounds like a bit of BS going on with your "guy at the 4wd shop".

As per your other thread, I replaced my OEM starter with an identical reman unit from CDAN. It's just not worth effing around with aftermarket crap.

As per Kernal I opened up the original starter (not worth shipping back for $30 core fee) figuring it would be instructive to see what if anything inside was worn. The reduction gear area was bone dry and I've lubed it all up nicely again (after cleaning the dry stuff out). I've removed the brush module and the brushes are in good nick with plenty of material left on them. The FSM gives specs on the commutator area and how to 'clean' it up on a lathe and then slot the segments with a hacksaw blade.

Anyhow, the old starter will soon be back together again and I'll run it up on the battery a few times to check it out and then it'll sit as a spare in case someone needs one in a pinch. For about $210 (if you don't return for core fee), it seemed like a good investment after 13 years of MANY starts.

Back to you - IF IT WAS ME, I'd return the aftermarket crap and put some $$ down on a toyota starter and you'll be good to go for a long long time. Seems to me you've wasted a ton of time chasing what should have been a 1 hour remove/replace and get on with life job.

Thanks George. And yes I think you're right. Lesson learned.
It's Toyota genuine all the way from now on.

UPDATE** Ordered the right model direct from Toyota, the service dept tell me that there were a few different models and the aftermarket brands try to make a 'one size fits all' model. They laughed when I tld them and said 'they're just not right are they'

$600.. from Toyota
Brush kit is $40 but I just want to be done with this, no more mucking around for me this time.
You must log in or register to reply here.