Bikersmurf, seems the bump stop manufacturers claim you can compress a bump stop 80%, but many Baja racers proved you can wipe the bump stops clean off the frame.

Regarding fan shrouds, the Society of Automotive Engineers did some test on cooling with and without a fan shroud. What they discovered was that your engine cools better with a shroud, BUT that it cools the best when zero percent of the fan blade is inside the shroud (i.e. shroud only coming back to the front edge of the fan blade). Evidently when the fan is inside a shroud, wind cavitates and actually flows rearward, blown air back out the grille?????. If this is the case, then your fan would not be creating the hurricane inside the engine compartment needed to exhaust the hot air out of the engine compartment?????

Get a bigger hammer..

Wonder about the newer electric fans with rimed blades and the fan inside the the open part of the shroud..

In the words of Dora and Boots, "We Did It!"

I appreciate everyone sharing their knowledge.

I will forever be greatful to OrangeFJ45 for helping me. 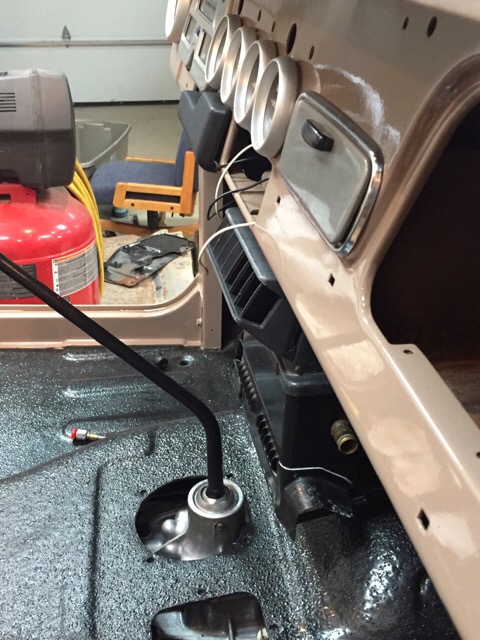 Here's how I removed my Transmission top cover. Bolt, Bottle Jack and a 2x4. 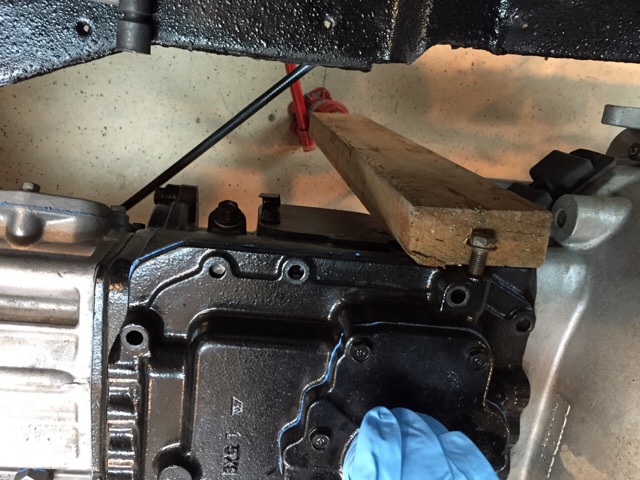 Nice! Did you wind up using the 60-series top cover to get it into the original hole? It looks aluminum, so I'm guessing you did. Glad Georg had one for you. Any shots of the engine in the bay? Just curious as to where it's sitting. I'll use yours as a template when I do mine! How far back did you end up putting the mounts from your front cross-member? How about the location of the head from the passenger side firewall (closest point).

Yep, George sent me an aluminum top cover. Works perfect, just had to find some different length bolts. Some of my stock bolts were too short and others were too long. I didn't move my engine so the pictures I posted on the first page are still applicable. I wish it was a bit closer to the firewall to center the shift tower. As of now my plan is to just call it good and move on to the next tasks.

-Plumbing fuel lines
-PO purchased liquid filled fuel pressure gauge and cut hole in dash so I need to learn how to hook that up. I have an Autometer isolater. Also the PO bought a big honkin' Russell filter I need to make a decision on.

-go through stock harness (been told I can make it work) 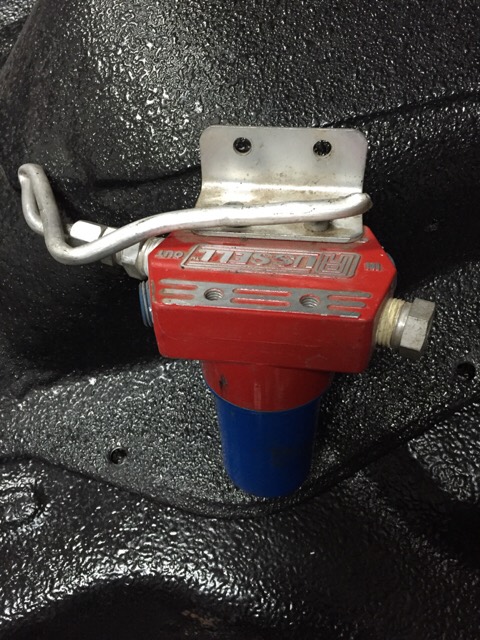 I haven't really had time to work on my cruiser in quite some time due to new child, divorce, trying to sell the house, a ton of OT and everything else in life.

Been lurking back here a little now and again.... this thread has perked my interest a bit.

I purchased mine 2 years ago and it came with a 327/TH350 (and stock transfer case). The 327 was garbage and a 4 bolt 350 was put in (after a ton of work to everything else). It should be noted that everything on the rig was seized up/rusted - last registration was from 1983 and it wouldn't surprise me if that's the last time it was driven. This conversion is OLD.

I have worked on a friends 68/69 FJ40 (unsure what year exactly) that has a late 80's/early 90's TBI 350 in it with exhaust that runs inside the frame rails- and he has a lot more room for a clutched fan in the front, and also has room for a cooler and a small fan between the radiator and the grill.

He does, in fact, have cooling issues in his on the trail or at freeway cruising speeds. Mine has the engine placed much further forward. Knowing he had room in his rig I bought some 1" high performance coolers for the transmission and steering.... but I don't have room between the grill and the radiator in mine. I also had to move the radiator around a bit just to find a lower hose that would fit - I have a flexalite fan with a 1/2" spacer - and it sits about 1/2" from the radiator (and the fan sits at the base of the radiator).

Mind you - I've added a slight body lift (for my own reasons) so the measurements may be a bit skewed... but I have:

5" from end of the head to the firewall on the passenger side
7" from the firewall to the MSD distributor cap
1971 Frame/body
Over frame headers with the fenders cut (again, purchased this way).

Between the stock grill and the radiator I have just enough room for a simple tube/fin cooler setup, nothing wider will fit.

My guess is that this is about as far forward as the engine can possibly be placed. I wonder if this was done due to the additional length of the TH350.

If anyone is curious I can go grab some photos.
T

To the OP - you said you are in WA.... guessing since you mentioned going to Portland you're more on the southern end....

Olympic 4x4 is in Snohomish and if there's something you need they'll take you back in the yard to check out what they have.... it seems to be a (very slow) revolving door of parts rigs that they have. Their prices are pretty decent - for instance I got a rust free 76 or 77 entire front bib with headlights, aftermarket headlight guards, factory hood latch, and the stamped trim plate (basically a complete unit) for $175. The good condition gas tank I picked up for somewhere in the $60 range...

I vote you Post'em up. Glad you are stirring. I just got a set of keys in the mail, so I am stoked!
T

I was lazy and didn't feel like getting the DSLR out, so phone pics will have to do.

Wiring is a lot scarier looking than it actually is.... it's just still mid wiring and I haven't taken any time to clean it up, at all. 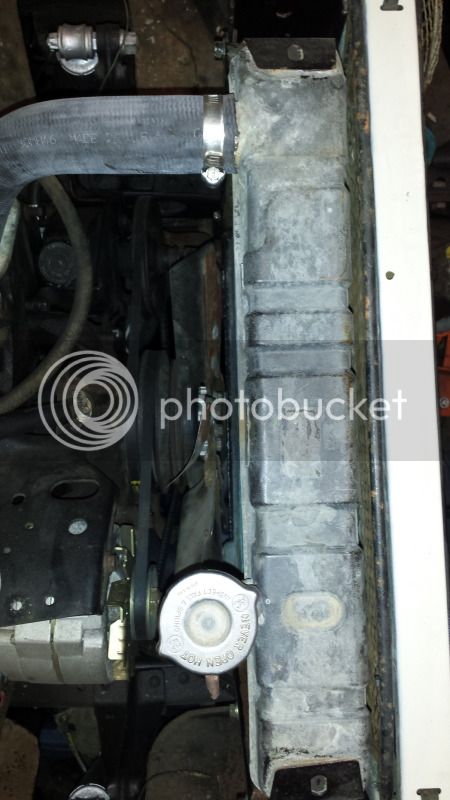 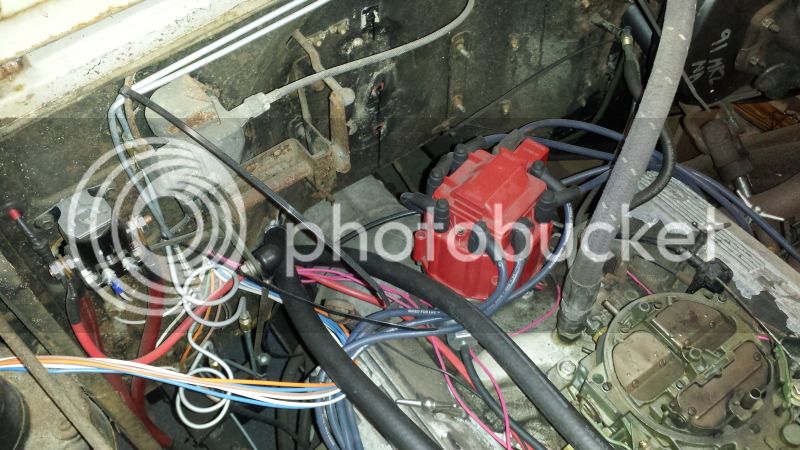 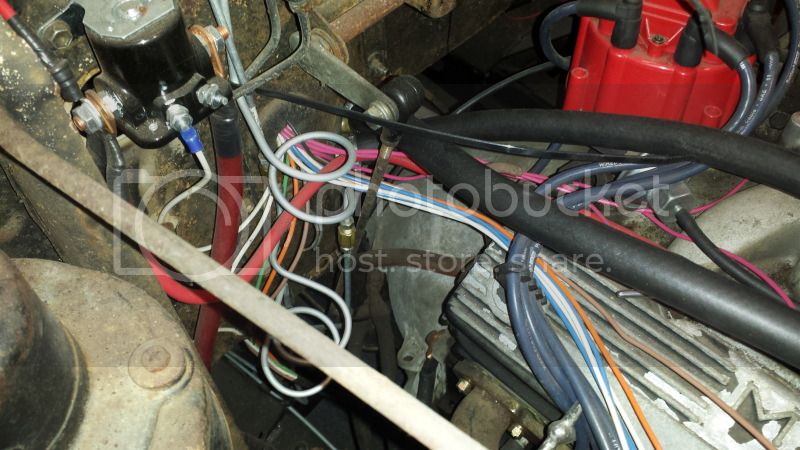 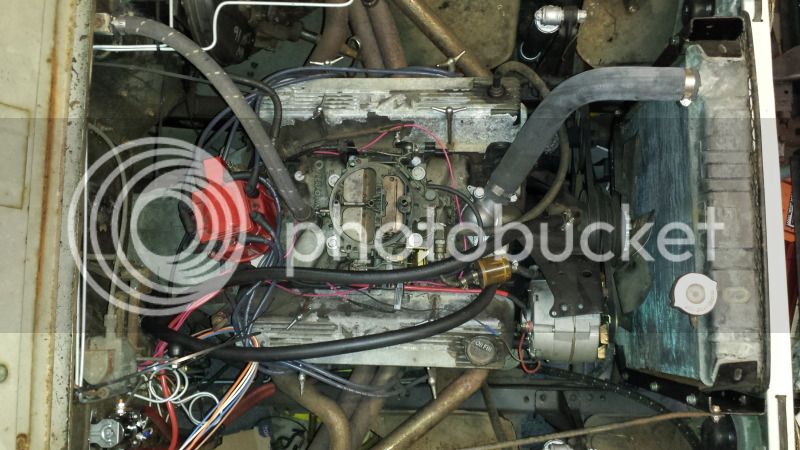 Those are good shots. I've got a couple simple heater hose questions.

First, is there a place online that would have the hoses I need? My local store didn't have anything. Anyone know part numbers?

I took some pictures of Q2: 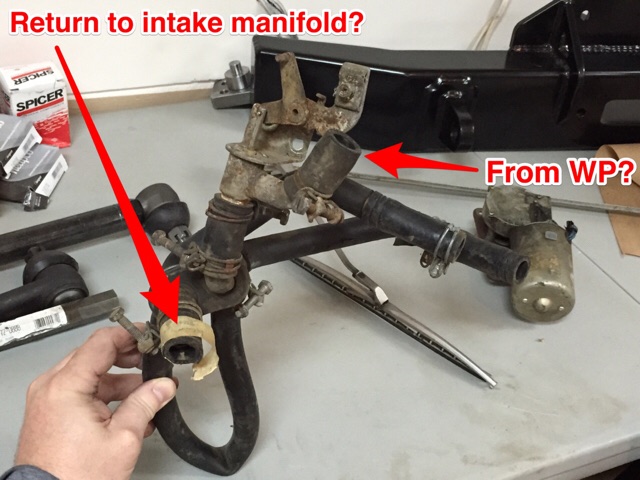 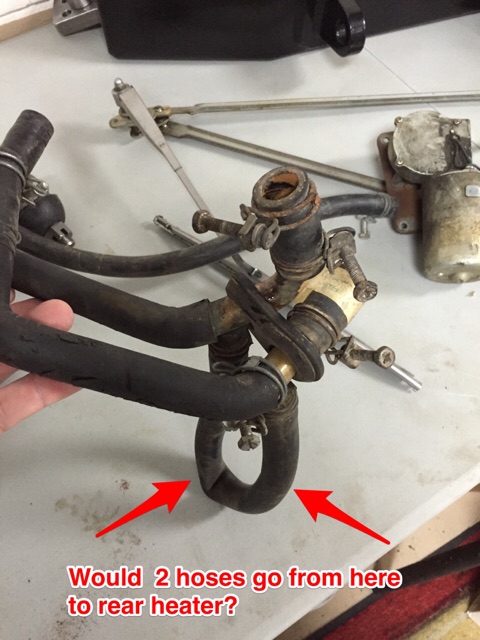 I would like to hook up my heater hoses soon. What goes where?

Also, below is a picture if an inline coolant doo-hicky that was in my boxes of parts. Where the heck did that run coolant on a '76 FJ40. Will I need it on my SBC? 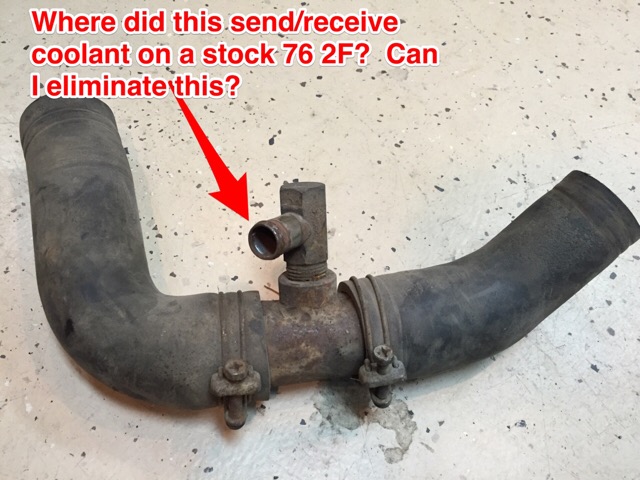 It's been many years since I've done anything with a SBC, but if my feeble memory is correct, they have heater hose fittings on the water pump and the intake manifold. If so, pic one is correct. Pic two looks correct to me also. That hose and fitting in the last pic is the lower radiator hose. That fitting uses heater hose to connect to the heater core. If my memory is correct on the items in pic one then you can eliminate that fitting. 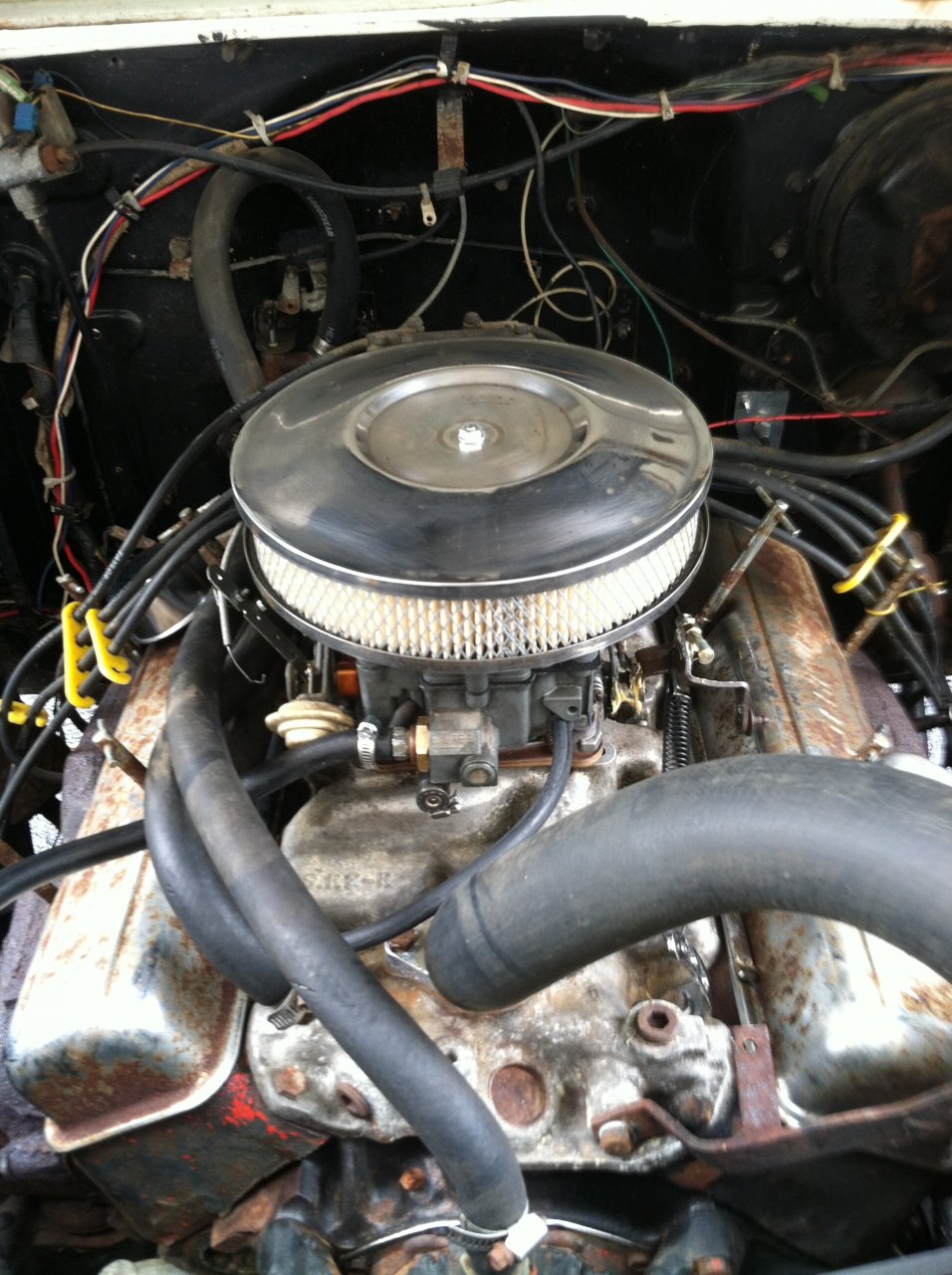 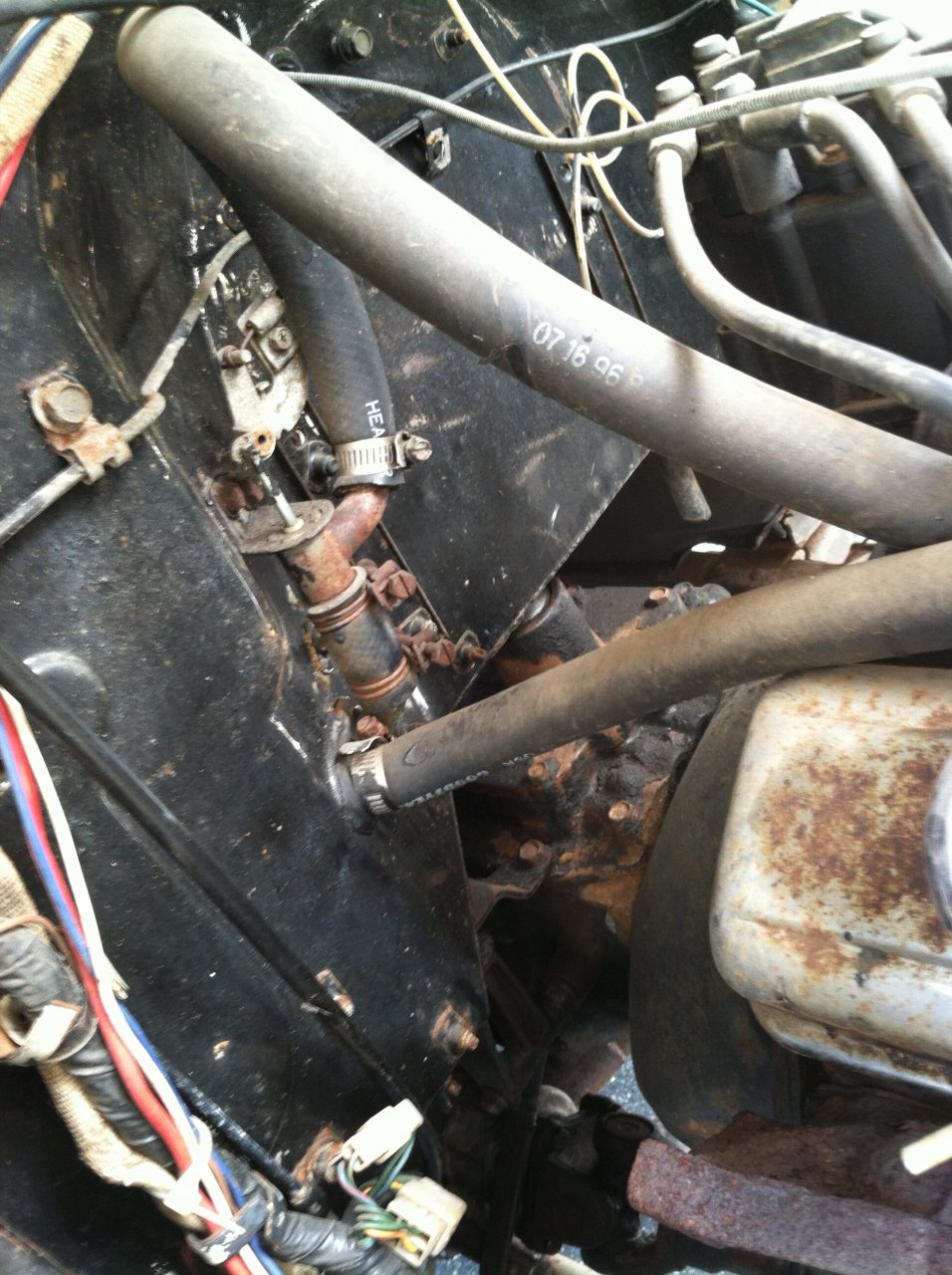 Not saying this is the BEST way to route them - but they certainly work...

Also gives you a good idea of where NOT to mount your V8 - note the transmission slammed up against the firewall.

This is exactly why I'm so interested in your conversion!

Rick, thanks for those pics. My feeble memory actually worked for a change.

After looking back on my last post I find I should clarify my last sentence. I was talking about eliminating the fitting shown in pic three.

First, is there a place online that would have the hoses I need? My local store didn't have anything. Anyone know part numbers?

Also, below is a picture if an inline coolant doo-hicky that was in my boxes of parts. Where the heck did that run coolant on a '76 FJ40. Will I need it on my SBC?View attachment 1021774
Click to expand...


Yes, I put a plug in the lower water line. Picked it up at the plumbing shop.

thebigredrocker said:
In the words of Dora and Boots, "We Did It!"

I appreciate everyone sharing their knowledge.

I will forever be greatful to OrangeFJ45 for helping me.


Awesome, glad I could help.

I'd possibly like to do the same one day... Any idea what year range of 60 transmissions will work... Read lots about it, just not that detail.

Downey said:
Bikersmurf, seems the bump stop manufacturers claim you can compress a bump stop 80%, but many Baja racers proved you can wipe the bump stops clean off the frame.
Click to expand...

If I was worried about it I'd add a spacer between the frame and the bump stop. However, since I rarely see a wheel in the air, and never two, I think I'll risk that I could ding the harmonic balancer. If I had a larger truck balancer, it'd be more of a potential problem.

I didn't ask OrangeFJ45 what year Top Cover he sent me. He PM'd me and said he would send me everything I needed to solve my "shifter too far forward" problem. I've read numerous comments on MUD that Georg is a Cruiser Guru and trustworthy, so I called him said "yes, please" and kept my conversation brief so as to not to waste his valuable time. Perhaps someone will chime in and give us the FJ60 Top Cover years that are compatible.
T

On an older rig like mine (that doesn't have a heater valve - though later on I plan to install one from another vehicle) the direction of flow through the core doesn't matter. It would be best to put the pump side on the valve so that you can regulate water flowing through the core before it gets to the core. (Though realistically both sides will get up to temp through radiant heating of the coolant).

The looped lines inside the cab - yes those would otherwise go to a rear heater.


As for hitting stuff - if anyone is planning to wheel their rig much more than some mild mud and pre-run simple trails... I'm not sure why engine/trans guards wouldn't be built.


As a side note - in regards to mine, I do have a mild (just under 1") body lift... I did this because I pulled the body off the frame and decided that $25 in 1" spacers and hardware store grade 8 bolts and 1/4" thick plates was a better option *for me* than $100 in factory-like body mounts. Some of the spacing on mine might be attributed to that. (Yes, I did have to modify the fenders and bib mount to make it all work).

The engine bay was left alone to make it look older on purpose. I really liked the corrosion build up on the M/T valve covers and the old T-handle valve cover bolts... so trying to keep the rest looking kinda similar. It's not just that I'm lazy (although sometimes I am).
Last edited: Jan 26, 2015

I bought a metal Ford F150 heater valve off EBay for about $16. It was an inline design and worked better for this application.
You must log in or register to reply here.

J
Is there a conversion kit for upgrading a 40’s stock alternator to a 100amp internally regulated alternator?