T-stat and housing, air filter, plugs, leads, points, water pump, coil. Will be down there this Sunday grabbing stuff for mine - I can grab all that if you want it and if you're keen you can come get it from Annerley Sunday night?

Sounds great! Keen to swap it all over and get back on the road, bit hesitant to drive in this weather with an iffy water pump.

Do you have a fan as well? If not I can sort one out.

I gave a fan, yes. But part of me wants to see if it'll fit the snout of my V8. The old school look would be cool.

No dramas, I'll see what I can find. I have a thermo fan somewhere if you get stuck.

Big thanks to Dan ( cult45) for the water pump, pulley and fan.

Unfortunately, the water pump doesn't have the outlet for the heater connection, so at this point I've just swapped the pulley. When I had the original fan and pulley off, I couldn't detect any play in the water pump shaft, so hopefully the wobble was just in the pulley.

This is the weld that was done to the original pulley. Its obviously unbalanced and caused it to move around. 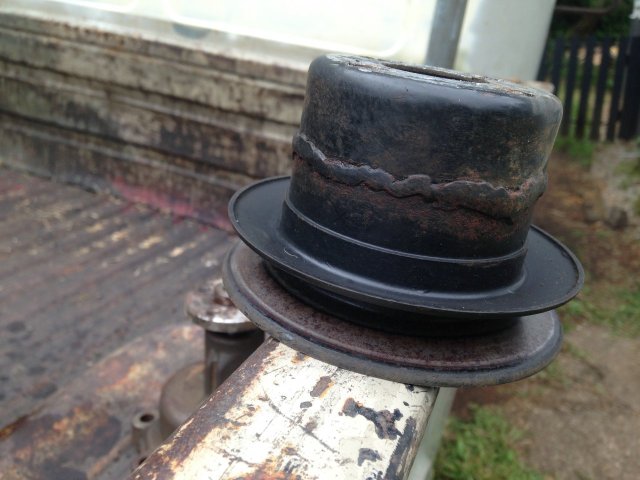 Which resulted in the four mounting holes elongating. 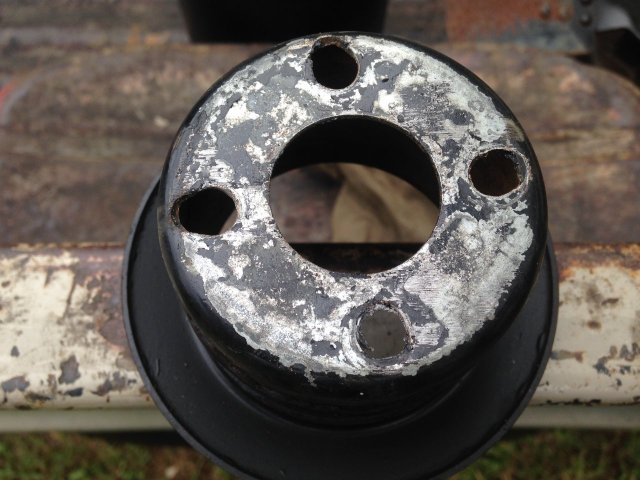 Also installed a new shift knob and cleaned 40 years of grime off the steering wheel.

Then I could help myself and fooled around with the carb and timing, resulting in it not running as well as it was. Oh well, still learning.

And I may have had the 45 photographed by the local constabulary, for excessive speed, uphill!
Last edited: Jan 4, 2016

Still working through the list of things the mechanic told me need attention. Next was the vacuum advance unit on the distributor.
After trying a few places and either getting blank looks from parts people, or told I needed a new distributor, I read about people reconditioning the diaphragm with Plasti Dip. Figuring I didn't have mush to lose, I cracked it open, cleaned the disintegrating rubber off and gave it a number of coats. All back together, reinstalled and the truck seems to have less of a hesitation/stumble when accelerating. But still not perfect.

While this was happening I also hit up the local wreckers to see what I could find. I wanted Power Assisted Steering pump, but every car with one still had the engine in, and the only way to get to it was by lying in the putrid mud, so I passed. I did however get an 80 series rag joint, and a 70 series intermediate shaft for the princely sum of $20. A quick soak in the vinegar and the splines are all cleaning up nicely. Slips onto the 60 series power steering box smoothly.

I also relieved a BJ40 of its engine mounts. I'd like to do a 14/15B at some point and these will make that job somewhat easier. Definitely a case of buying them when they come up for sale though, and I don't see the swap happening for a while.

Nice work! I think I have a dizzy here [literally here, not at the other engine], and one on the other engine too if you're interested. Might cost you a styleside tub though

First night run in the 45. Pete (84troopy) drove past in his troopy 30 seconds before this shot was taken.
Happy to report that headlights and interior lights worked well and no significant drain on the battery. 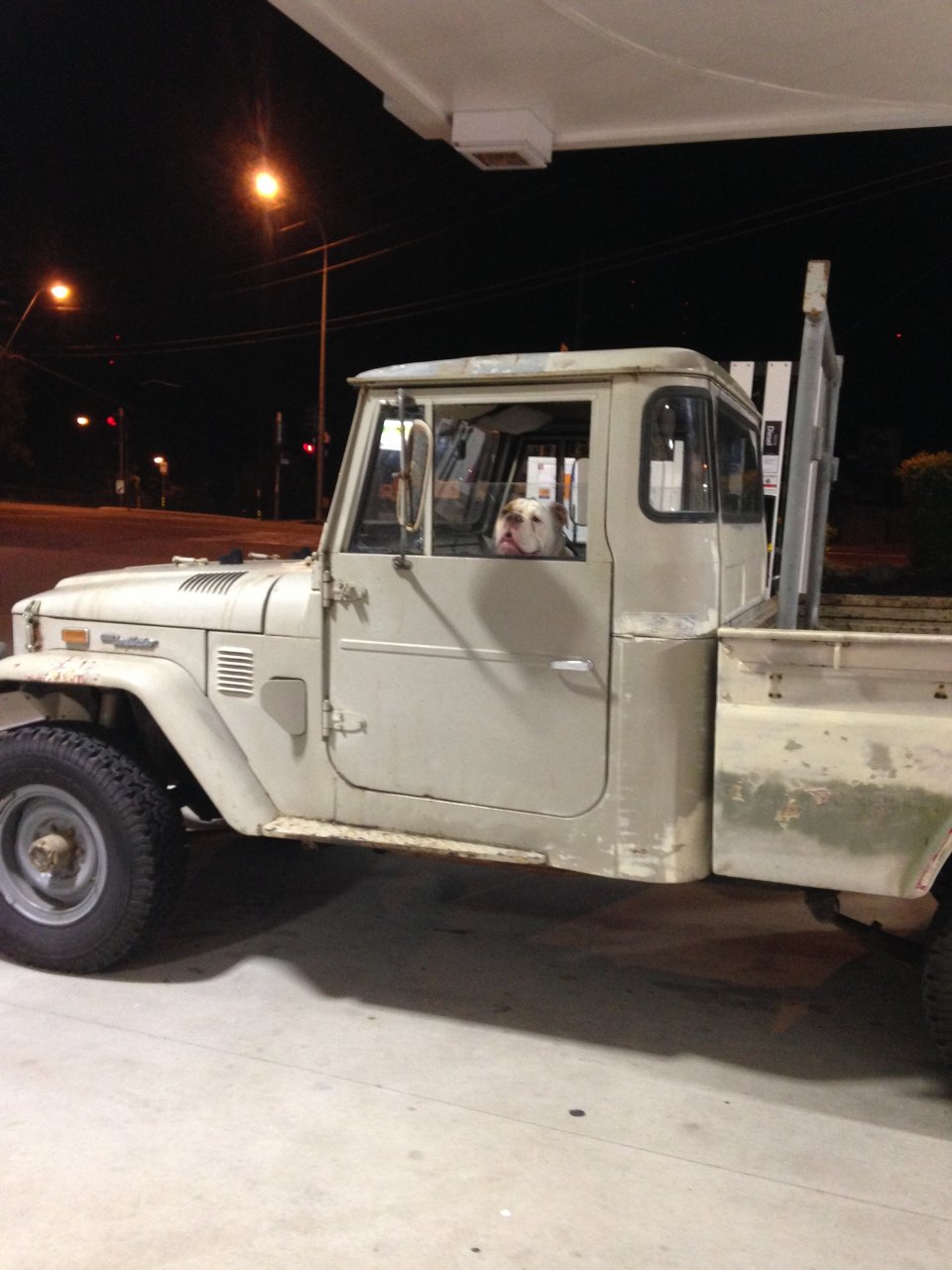 sneaky said:
First night run in the 45. Pete (84troopy) drove past in his troopy 30 seconds before this shot was taken.
Click to expand...

And I missed it!

So the 45 has been put into service taking garden waster to the transfer centre and hauling mulch from the landscape suppliers.

Engine temps and pressures all behaved, it rode a bit better with the mulch in the back, but all utes generally do.

I was beginning to miss some basic creature comforts though. So to that end, I've put some $10 Sony junkyard speakers into the CB speaker mounts and mounted a new head unit with a few bells and whistles into the glove box. I need to raise it and secure it but this works till next weekend. One of my pet hates though is bad /messy wiring so I heat wrapped the speaker cables and ran them in the same location as the wipers. I also ran a couple of wires for an oscillating fan I might install. 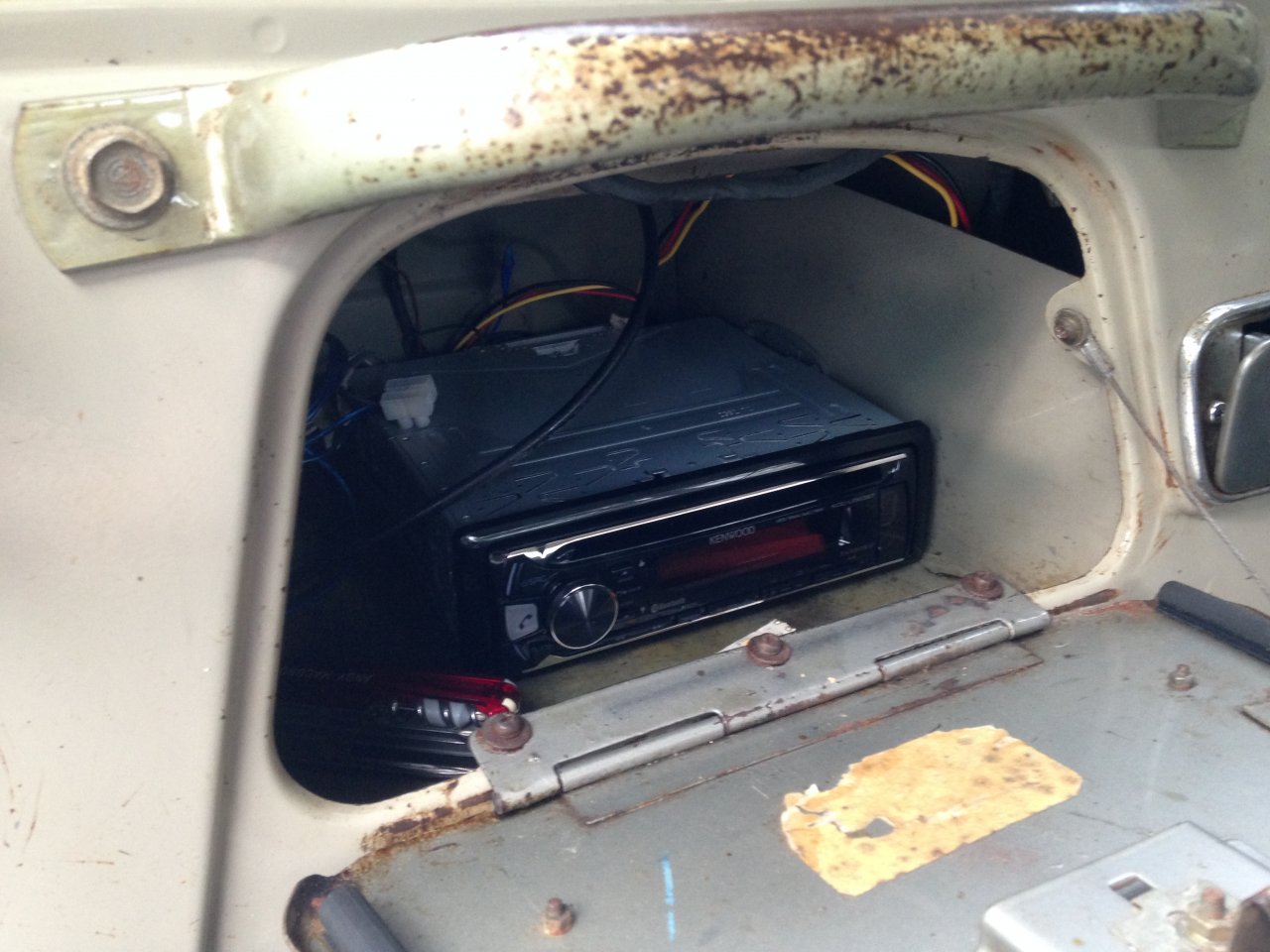 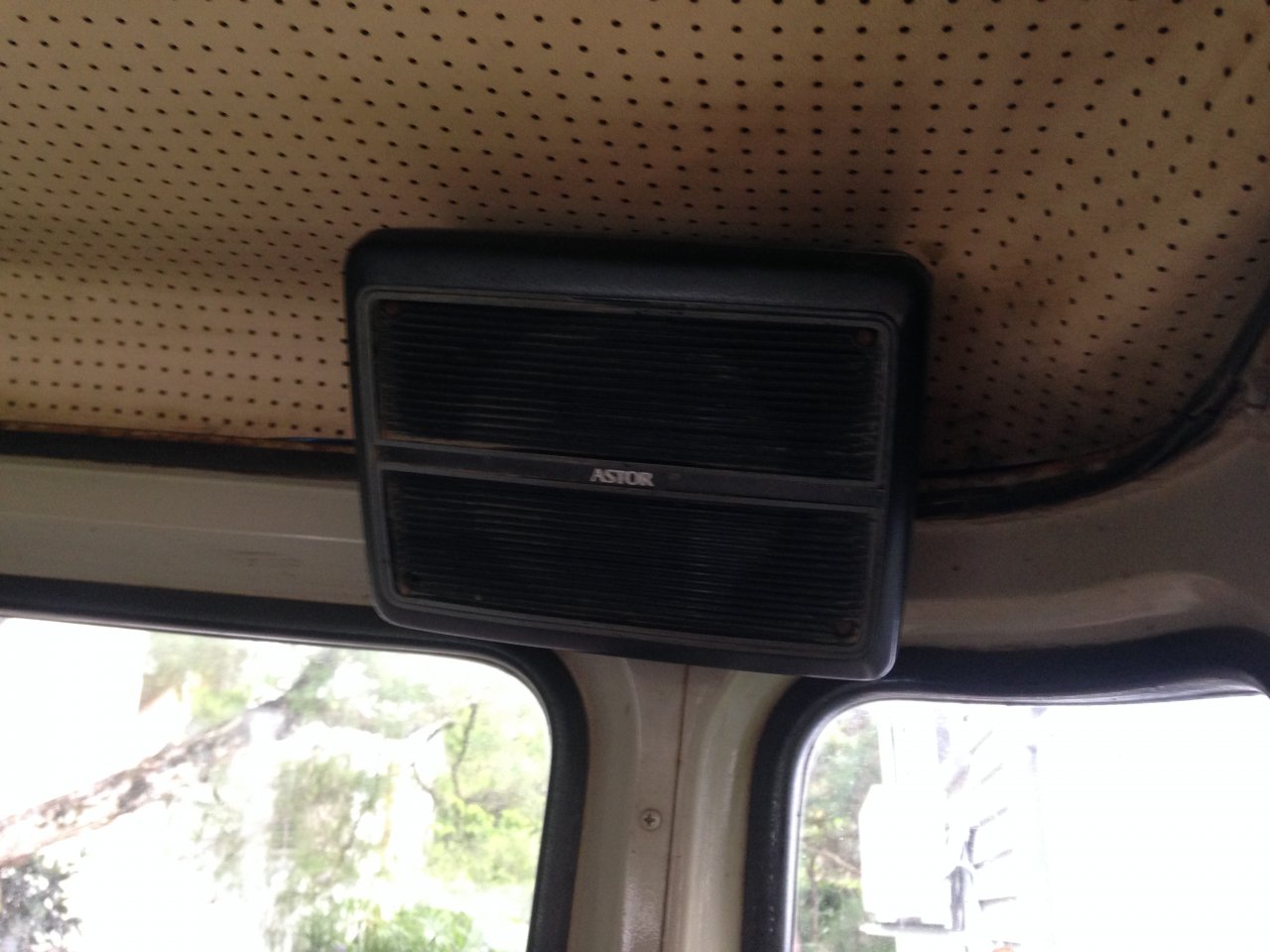 I also pulled the speaker barrier from the glove box to compensate for the space taken up by the head unit, and found this behind it:

I carefully unfolded it, hoping I'd found the holy grail of old car documents, the original bill of sale.... only to find a receipt for some caravan parts from 1982! 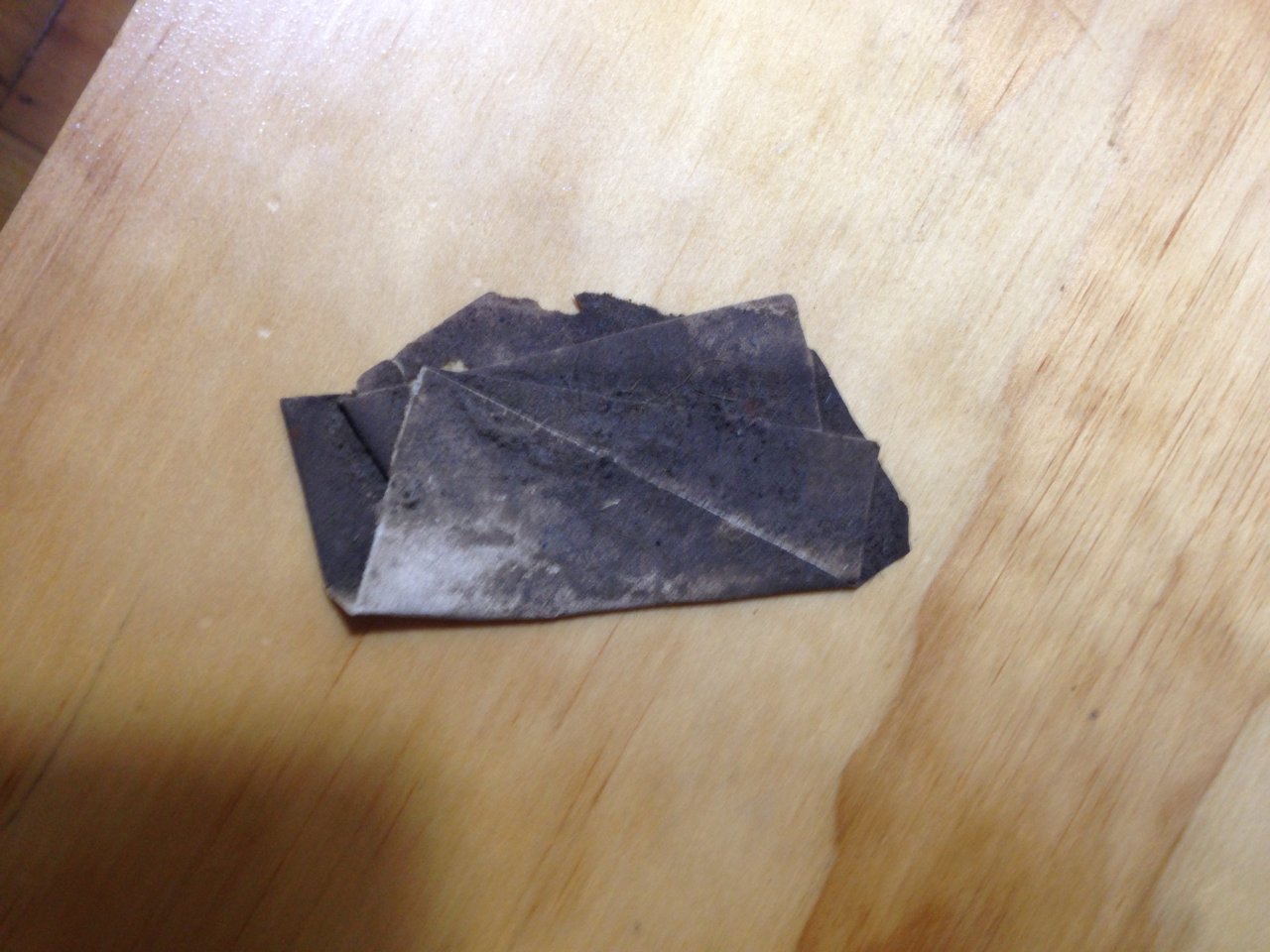 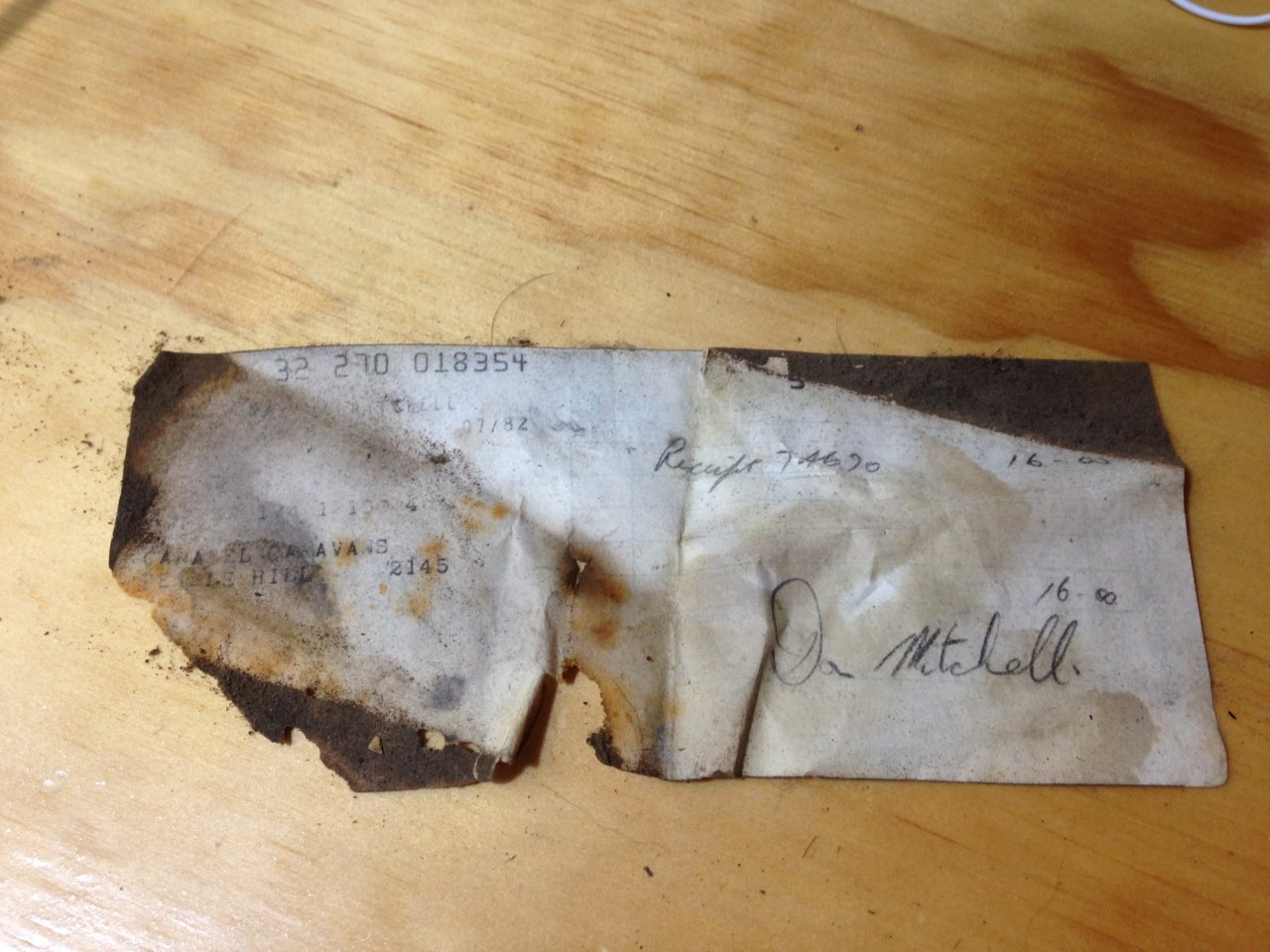 Edit: A caravan, that's what.

At least you know your truck has been to Pendle Hill.

These are your people. They do this: 1978 Toyota LandCruiser FJ45 Chassis with Commodore V6 conversion | Cars, Vans & Utes | Gumtree Australia Cessnock Area - Cessnock | 1106893958

That's hideous, stop spreading it all over the internet!

And I think Mud people are my sort of people. There's an incredible depth of knowledge, generosity and talent here, it really is a great resource.

Time for an update, I didn't realise it had been so long!

Since the last update ,the radio is in and working as well as junkyard 4" speakers can, and the head unit is mounted in the glove box, but I am still able to use most of it.

I've had to replace the radiator as the original one started to weep from the top tank once I put a flush through the system.

I've had the carb rebuilt and the timing sorted out. It was sort of gummed up from sitting for so long and it had a really high idle.

This has meant I've been able to use the truck to get landscaping supplies and do runs to the refuse station. Unfortunately on one trip I had a set of points fail, and by fail I mean snap off at the point of contact! Something I've never seen before. Unfortunately it happened on a blind twisty corner and the truck doesn't have hazard lights, so it meant a tow home. But lesson learnt, don't buy cheap ebay points.

Most recently I've been cleaning off the PO paint in an effort to get it looking all one colour and to show off its life experiences ( ie scratches, rust and dents). This means that when ever I stop I get asked when I'm going to do the body work, some people just don't get it.

But those that do, are people like Cult45 who has asked to use it in a short film he's making. I was a little apprehensive to let him borrow the truck, namely because its untested over long distances, but I figured it was in capable and respectful hands, and I sent him off with a toolbox of stuff.

Below are some photo's he took while scouting locations west of Brisbane. 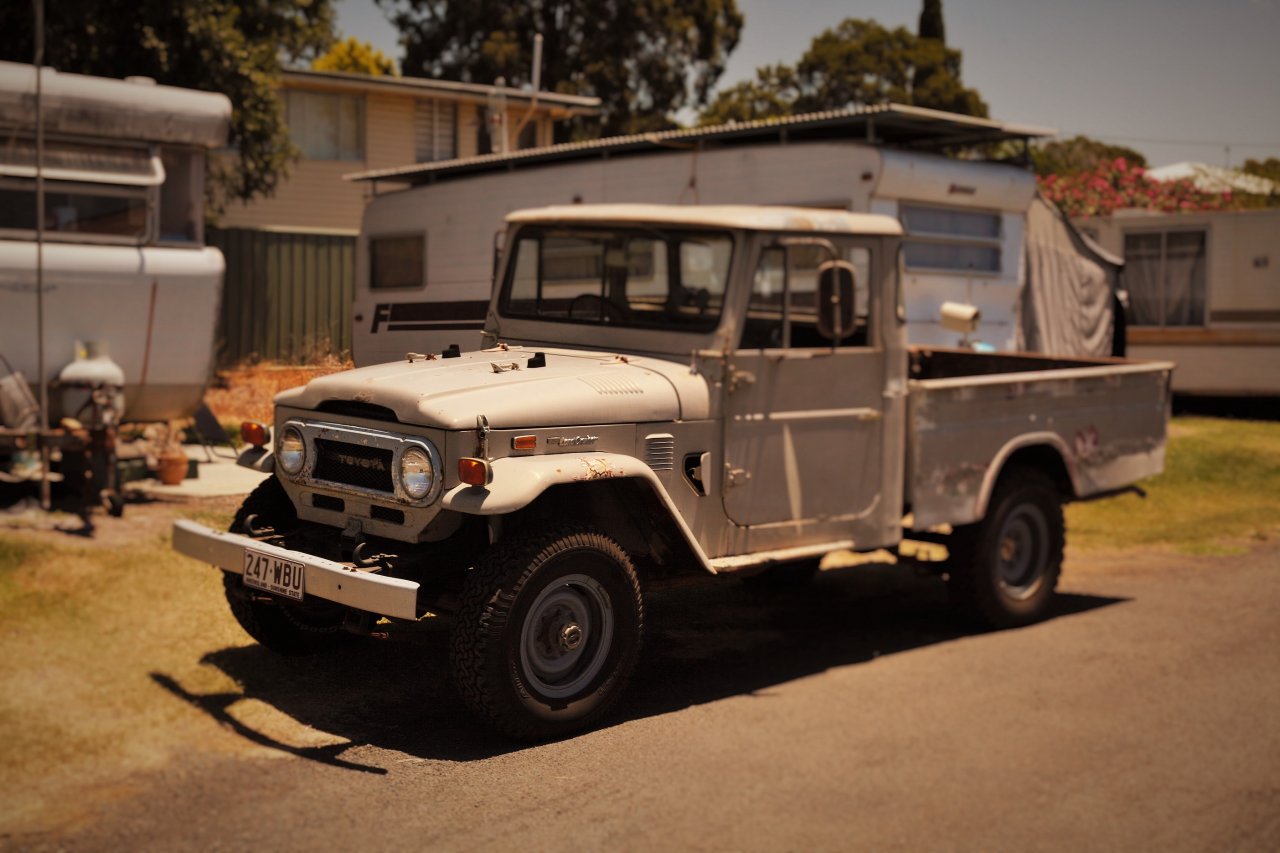 p.s I don't live in a trailer park, despite what information may be in this thread! 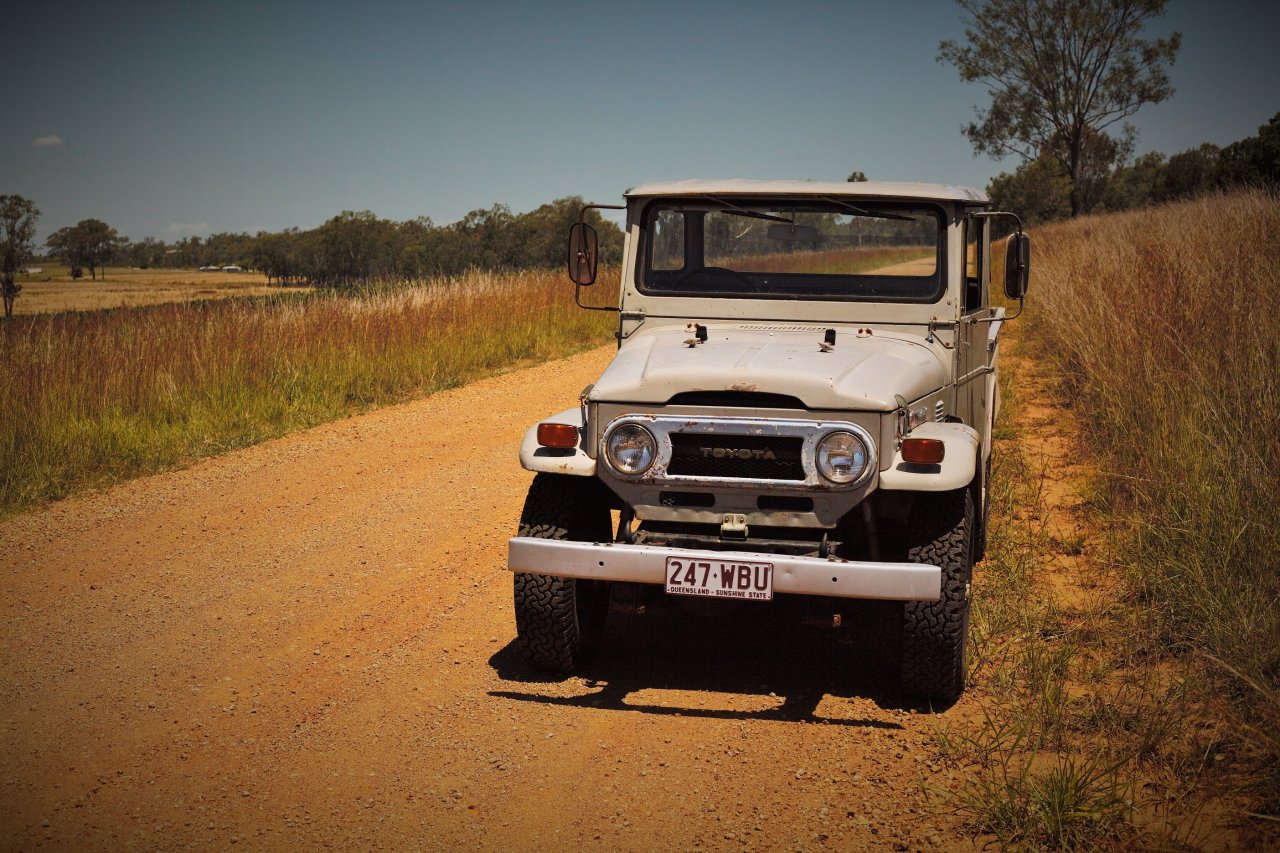 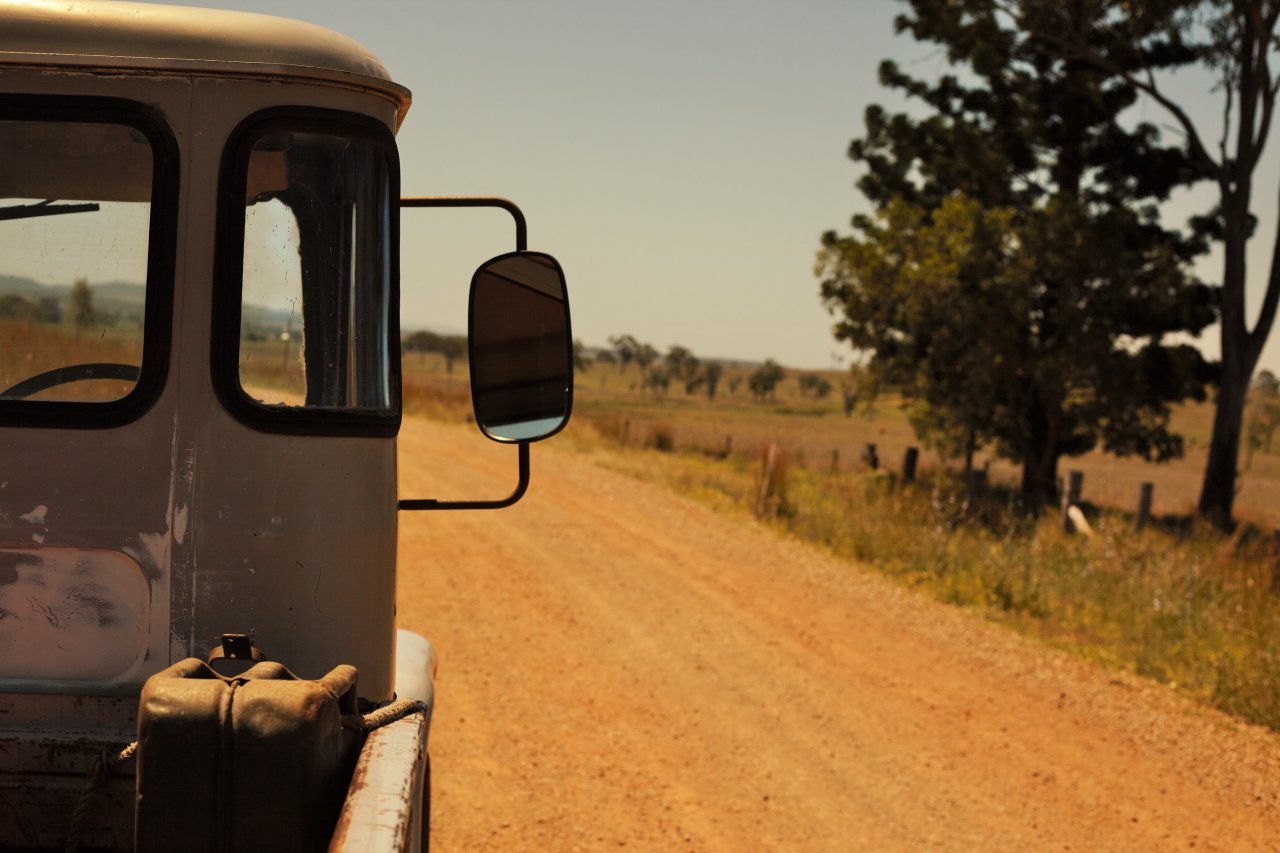 Filming is due to occur next month, so stay tuned to see what Dan has written, will be producing and acting in. I'd say starring, but clearly the 45 is the talent!

Thanks again for the rig mate! It's absolutely perfect - more perfect than mine would be! And it does what the director tells it!

Just kidding, but when I went to start it yesterday, fuel was running into the intake manifold and flooding it. So much so that I was able to drain fuel from the intake. Carb is back at the rebuilders, but he suggested that it was probably due to too much fuel pressure, so a new pump is on the way.

The fuel pump was the only part of the fuel system I hadn't replaced so I figure that this is another one of those things that a return to service/regular use has seen the demise of a system/part that was nearing the end of its life span.

The director wanted a white bezel, so arranged for a suitable replacement. Unfortunately it wasn't white and had a few holes in it. It also had a couple of fibreglass repairs that were pretty rough. 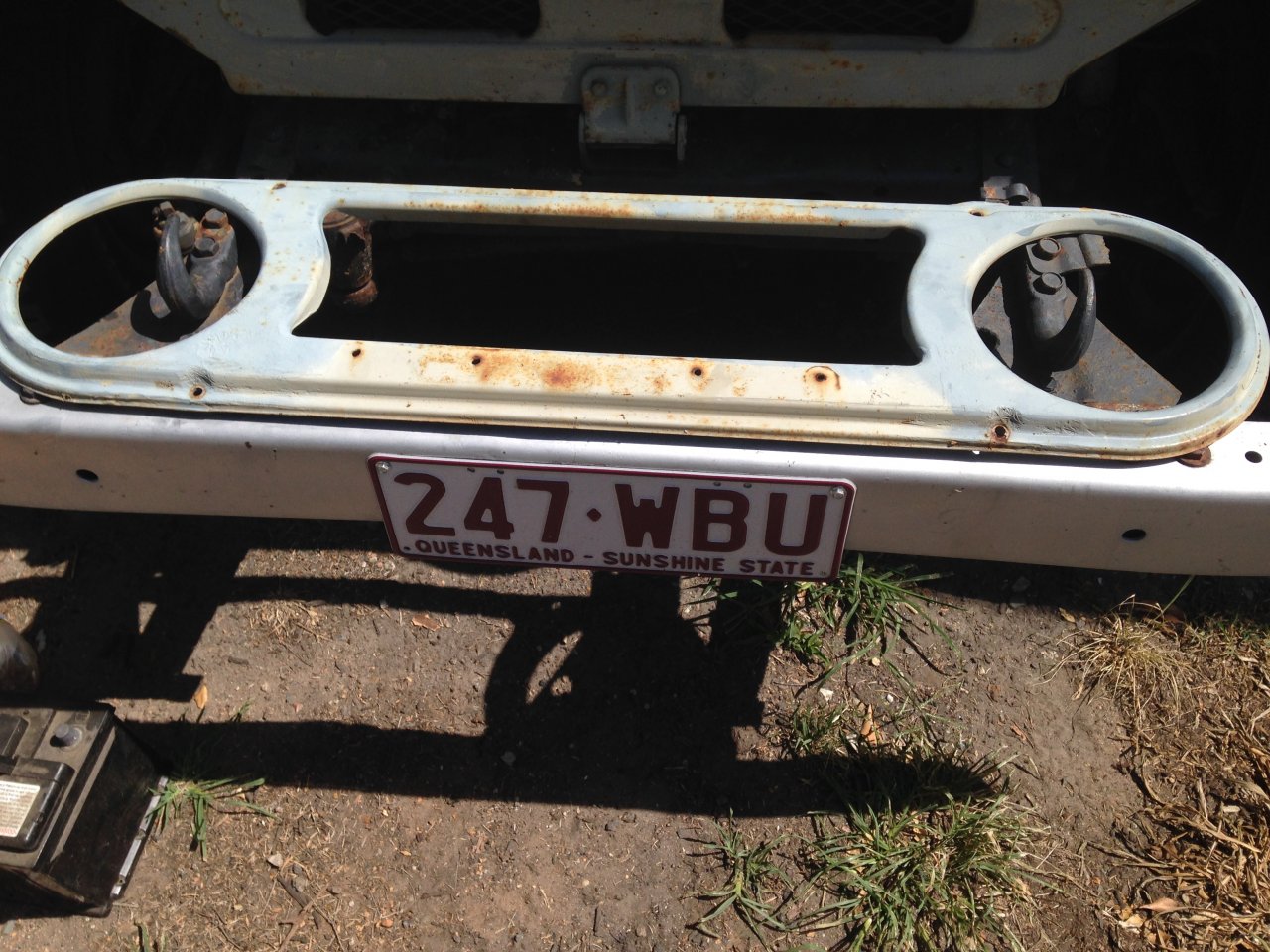 Knowing that it probably wasn't going to be in any close ups, I bogged up the holes and rough patches and gave it a few coats of paint.
But it had to match the rest of the truck, so some wet sanding, a little bit of salt and water and we have little bit of Faux-tina. 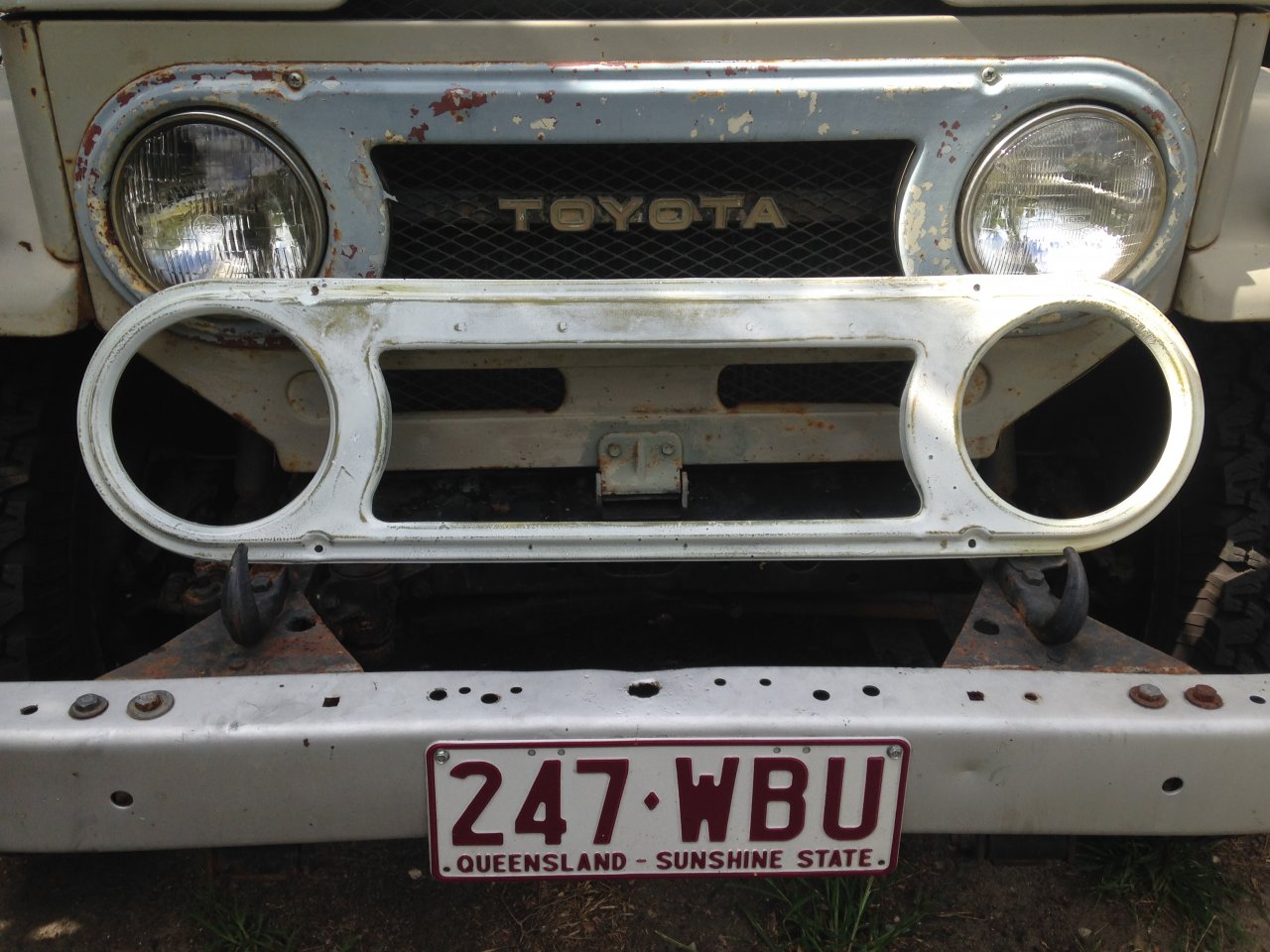 I'll leave it out in the sun now to let it ripen up completely. I think I prefer the weathered grey one though.

Those directors...... !
You must log in or register to reply here.