My son and I did a full rebuild on an '86 with 196,000 miles that was bought after the PO ran it low on oil and it threw and rod (thing was still running).
I'm good about cleaning parts but just flushed out and brushed off the rocker arm assembly in my parts washer without disassembling it.

First run was fine and break in was normal along with great oil pressure. Problem starting happening during a long running session where I just had it parked while working on something else. It starting ticking missing like a plug was getting fouled. Turned it off for the day and didn't think about it. Thought it might be bad gas from fuel tank (another story). Next day I wanted to get it inspected and registered since it hadn't been legal since 2009. Couldn't even make it to the shop. Made it half way and sounded so bad I turned around and barely made it home.

Got home and pulled the valve cover and found two intake valves stuck. First I thought it was an issue with the machine shop that rebuilt the head. Then, I found one of the push rod cups was broken and laying in an oil return hole and the pushrod was mushroomed and bent. Pulled the rocker assembly on a whim and decided to clean it instead of taking off the head. I did have a small camera that attaches to your phone to check the cylinders and everything looked fine on the pistons and cylinder walls.

From the pics below you can see all the carbon and debris pumped up to the top and clogged the holes that oil both sides of the rocker and the tube itself. One hole on the valve side feeds oil that runs down the valve spring and around the stem.

Don't know if this happened due to mileage, low oil and it just baked the engine or a combination.

What ended up happening was the tighter tolerance intake valves were the ones that stuck since any oil they had on them were being washed off by the fuel mixture and I'm sure the stems expanded too.
To get the valves unstuck I started with pb blaster and tapped them down and they'd slowly pop back up. Then I used motor oil doing the same, just tapping on the valve until it closed all the way traveled freely at it was tapped.

For the tube itself I removed the plugs (pics below) and used a shotgun cleaning brush on a drill to get out the carbon and debris.

Something I noticed while researching the issue was how many guys had problems with sticking valves and unknown ticking and mushrooming pushrods on high mileage rigs. You might check for carbon and debris in the rocker arm assembly.

This might be a good thread to add to the "how to not rebuild and engine" thread... 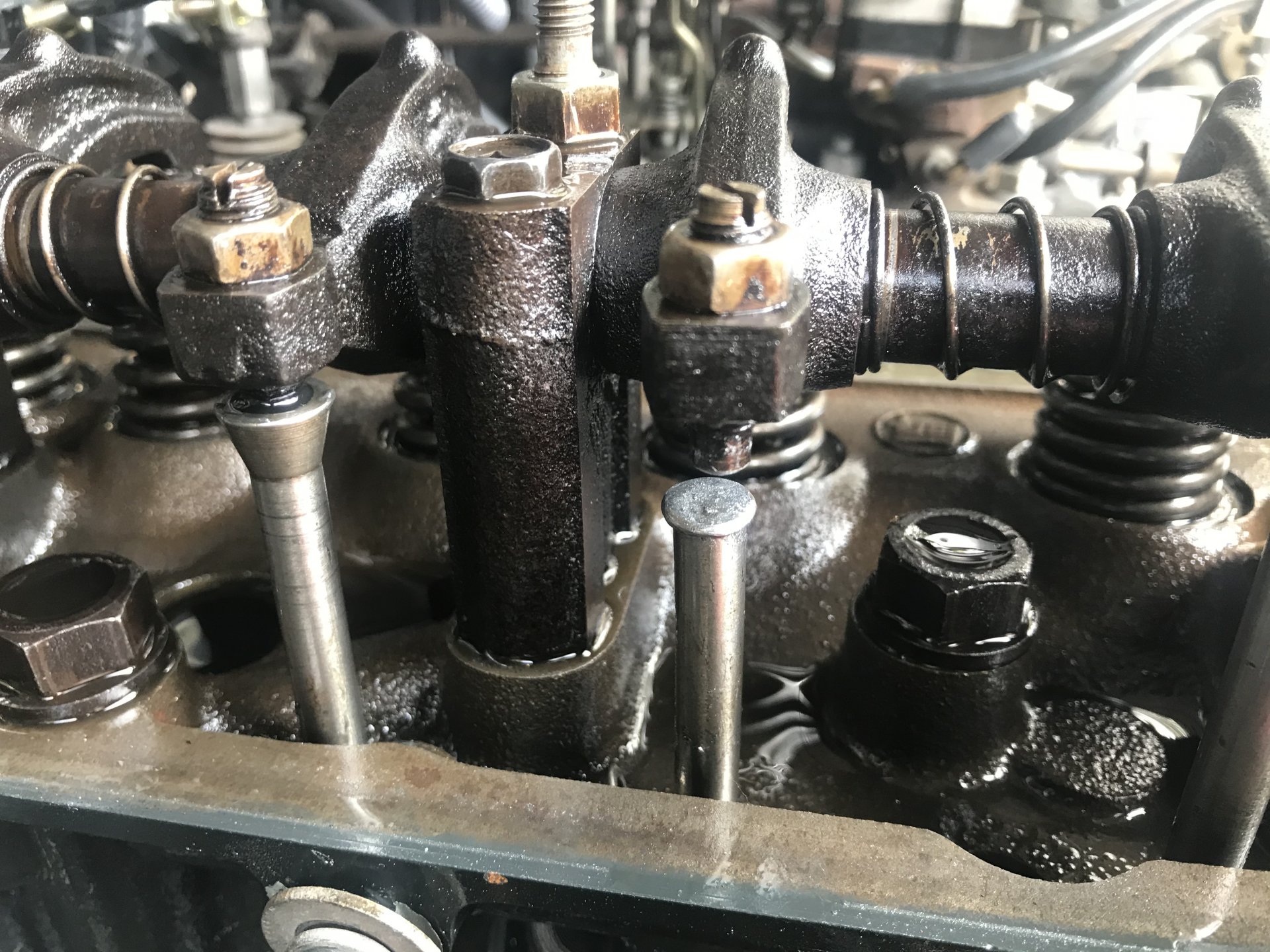 Some pics of the holes that were clogged up. 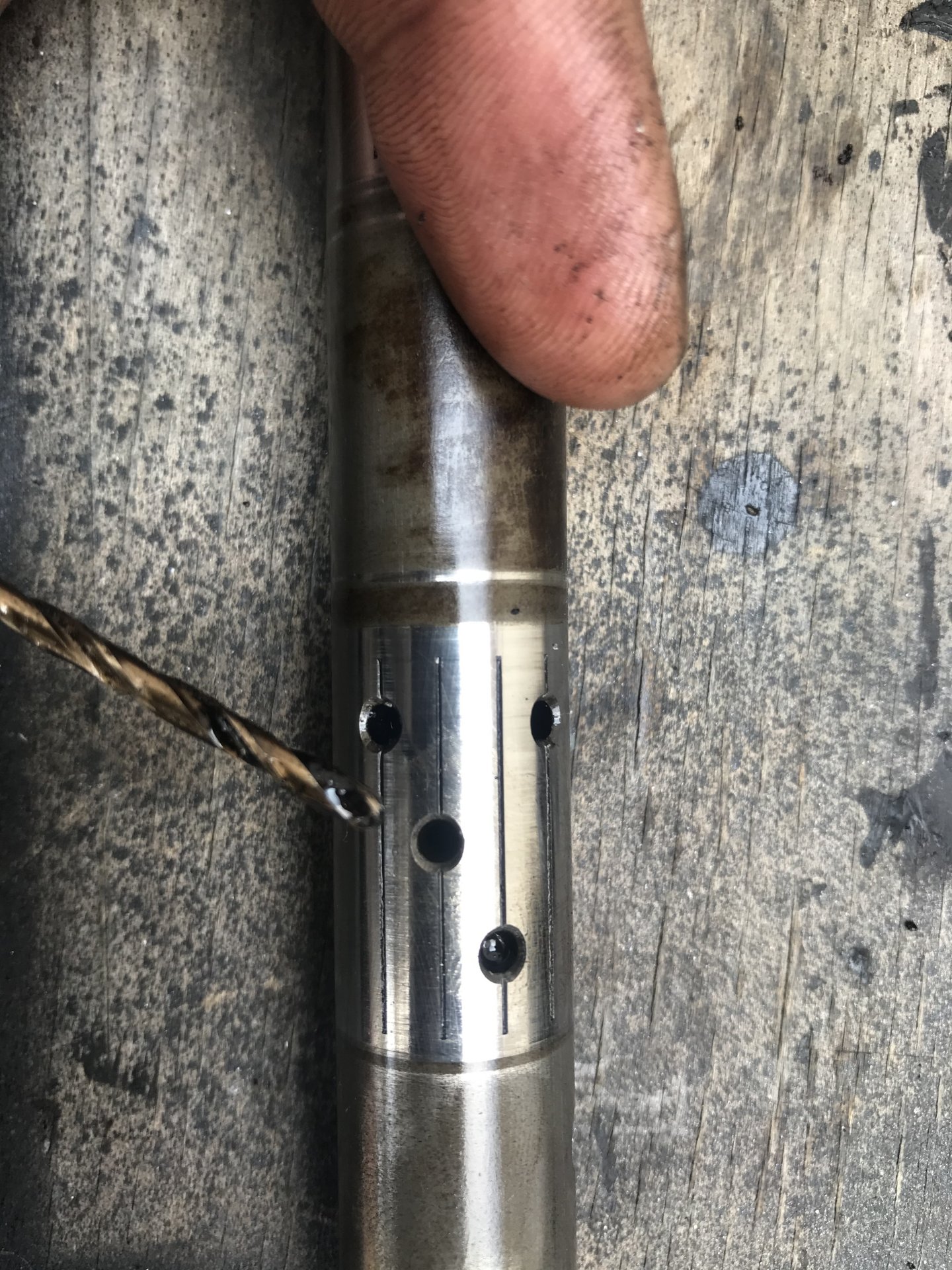 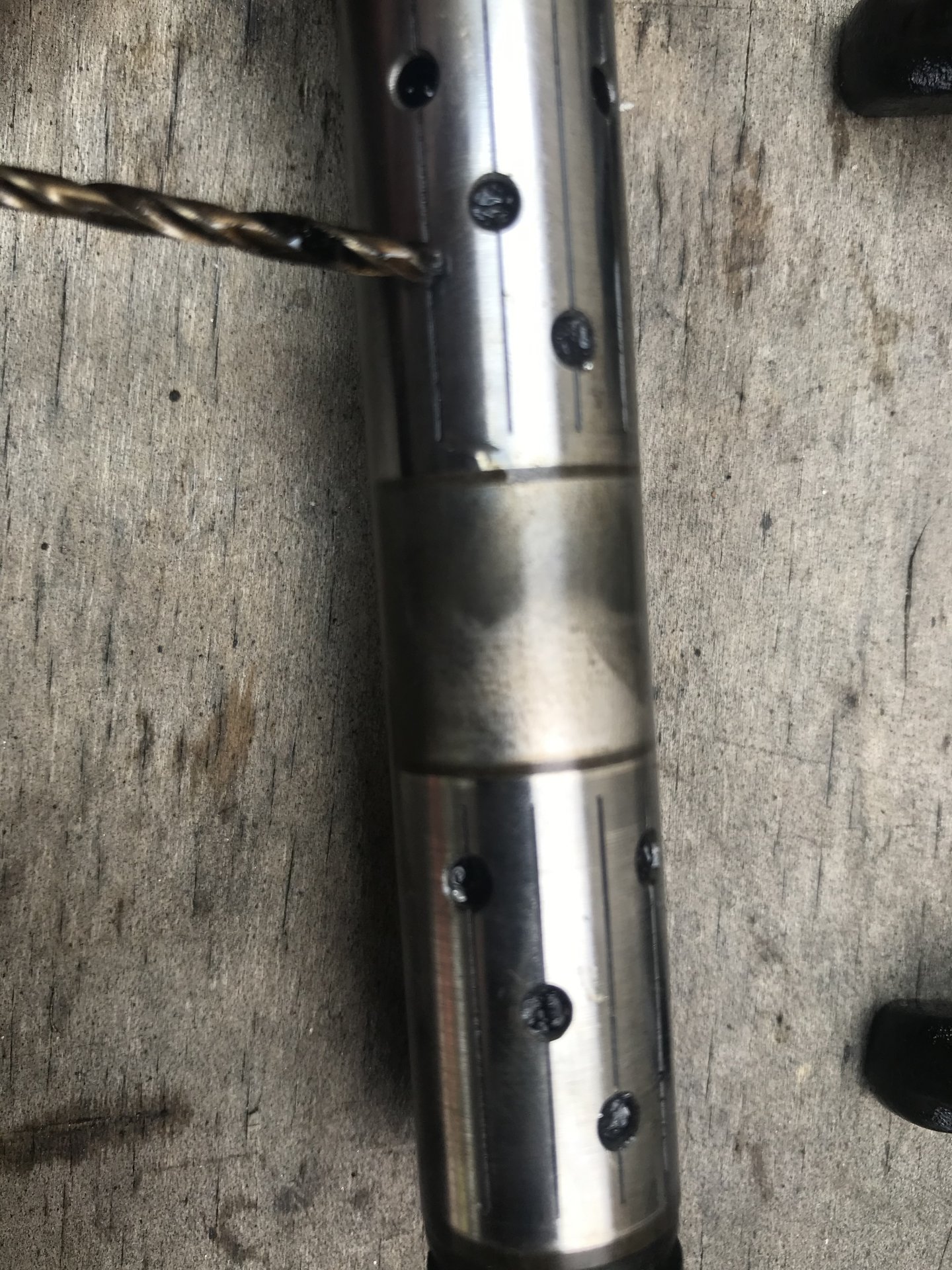 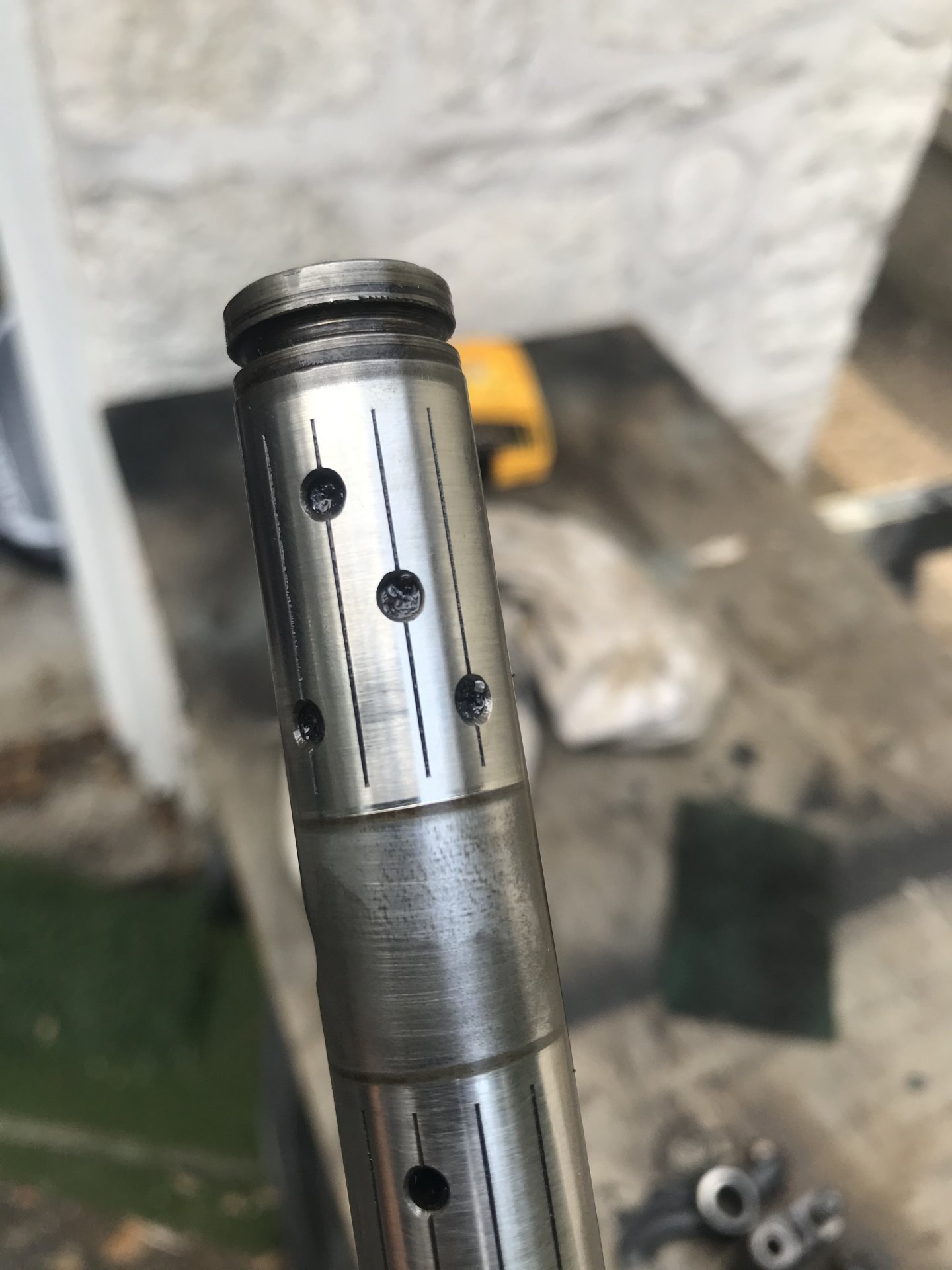 Pics of plugs on end of rocker shaft.
Plugs available at any parts store. 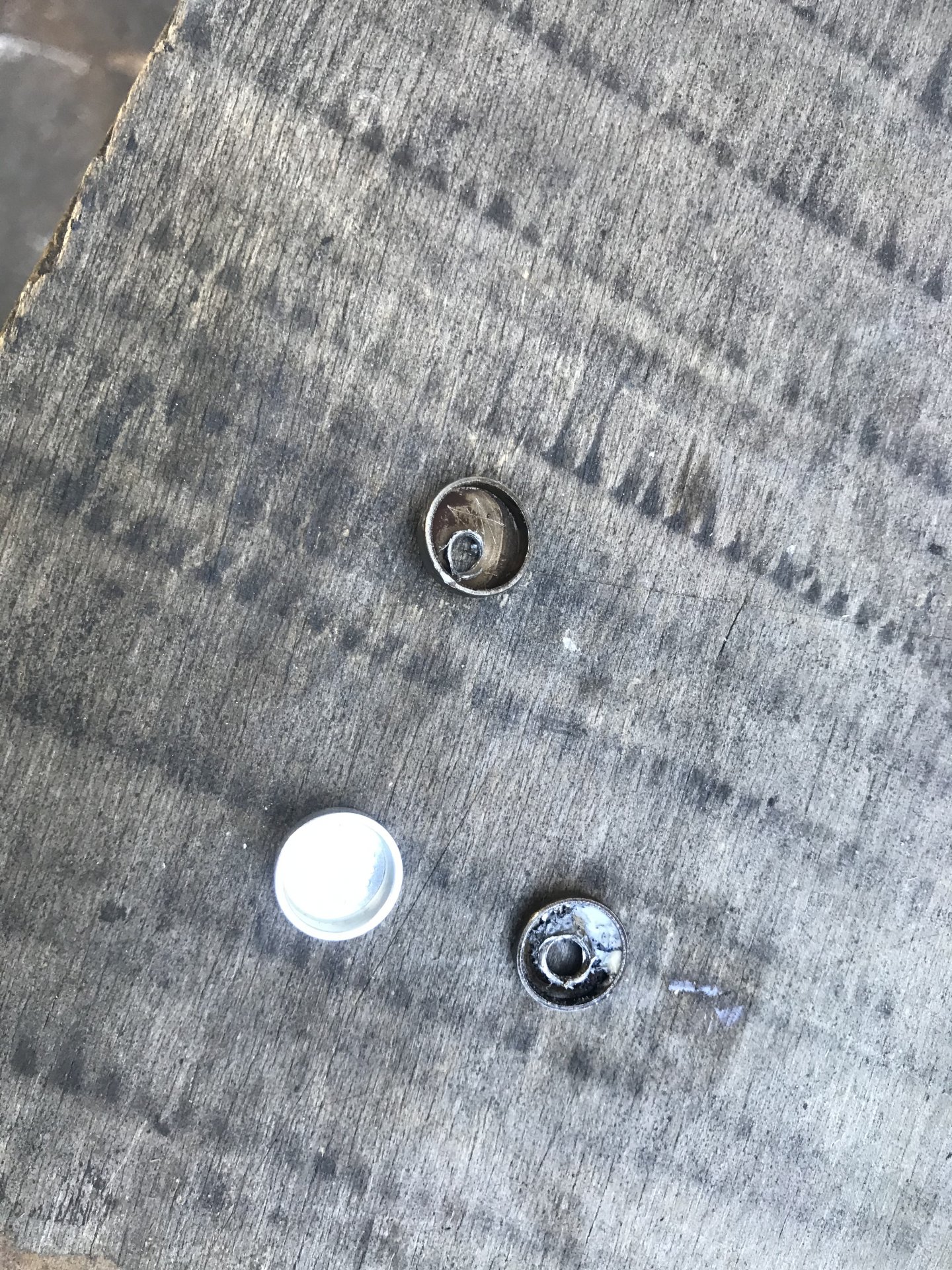 When I replaced my head gasket, I dis-assembled the rocker rail. Sludge had partially blocked passages in the rocker rail and the rockers. I used compressed air to blow out the holes, but I remember one hole on the rockers was at an angle and couldn't get the air nozzle on it, so used a wire. There sure are a lot of oil passages hidden in the rocker rail and the rockers. Just keep everything in order, there are A and B rockers that shouldn't get mixed up...and and the 3rd stud had an oil passage and needs to go back in the same spot. I also learned the hard way that you can't seat the valve cover gasket unless the studs are threaded all the way down into the head. Accomplished by tightening two nuts together and running the studs down.

I went out a couple weeks ago on an errand and noticed a strange engine rattle. I pulled over to check thinking I had a loose bracket. Everything seemed right. I’m pretty sure it’s coming from my valve train and I’m hopeful it’s fixable without major overhaul. But I’ve been sick with neurological problem since then so haven’t had a chance to tear into it. Hopefuly your post proves fruitful. Will update in my running thread when I get into it.

For people doing this in the future, you happen to know the size or even a part # on those Rocker Shaft End Plugs ? (not available from Toyota as a separate part, btw).

I had the same thing happen on my '84 FJ60, the cup of one pushrod was broken off and laying in the top of the head. With a trip to BTB Products in Henderson and a $5 lighter wallet I was back in business. I had never heard of that before, maybe it's more common than I thought.

What kind of heavy-ass pushrods are those? Looks like something machined out of solid steel.

Just OEM mushroomed over.
Ordered a new one that shipped fast not knowing they changed designs or I would have just found a used one.

While we are talking push rods are these something still available from Toyota or is there some coming source? I’ve not sourced pushrods before.

Yes still available but they are “lighter”. Don’t have the large cup on top.

Looking at the push rod on the left in his image...looks like this one aftermarket one from another thread:

Spike Strip said:
Sealed power (USA made I think) offers chromoly replacements that I like. RP3270 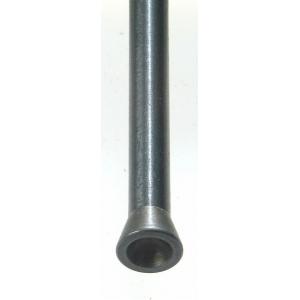 Those are aftermarket pushrods in your above photos. Not OE or OEM. Sealed power.

Found 3 of the sealed power pushrods on Rockauto for $13/ea. Ordered all 3.

Seth S said:
Found 3 of the sealed power pushrods on Rockauto for $13/ea. Ordered all 3.
Click to expand...

wouldn't you need a complete set? I mean are they exactly the same spec as oem?

g-man said:
wouldn't you need a complete set? I mean are they exactly the same spec as oem?
Click to expand...


every valve is it’s own assembly so if these work in place of a worn out stock unit then changing out one at a time should be fine as long as the ends mate properly and the length allows for enough adjustment.

I just grabbed them per the other thread and some basic research that indicated they would work in the 2f. I’ll find out soon enough.

g-man said:
wouldn't you need a complete set? I mean are they exactly the same spec as oem?
Click to expand...


In a different engine....say high revving and performance minded then the match would probably be more critical

They had them at Northern Auto if you want to try and make a full set.

Spike Strip said:
They had them at Northern Auto if you want to try and make a full set.

Seth S said:
rockauto called me to tell me their inventory count was incorrect and the correct number on hand was 0


I've got 12 of them if you're interested, NIB. I bought for a build that didn't happen.

Provided I can find them in one of three storage spots

Spike Strip said:
I've got 12 of them if you're interested, NIB. I bought for a build that didn't happen.

Provided I can find them in one of three storage spots


mill let you know once I get the valve cover off and find out what sort of carnage I find.

right now I have to deal with this: 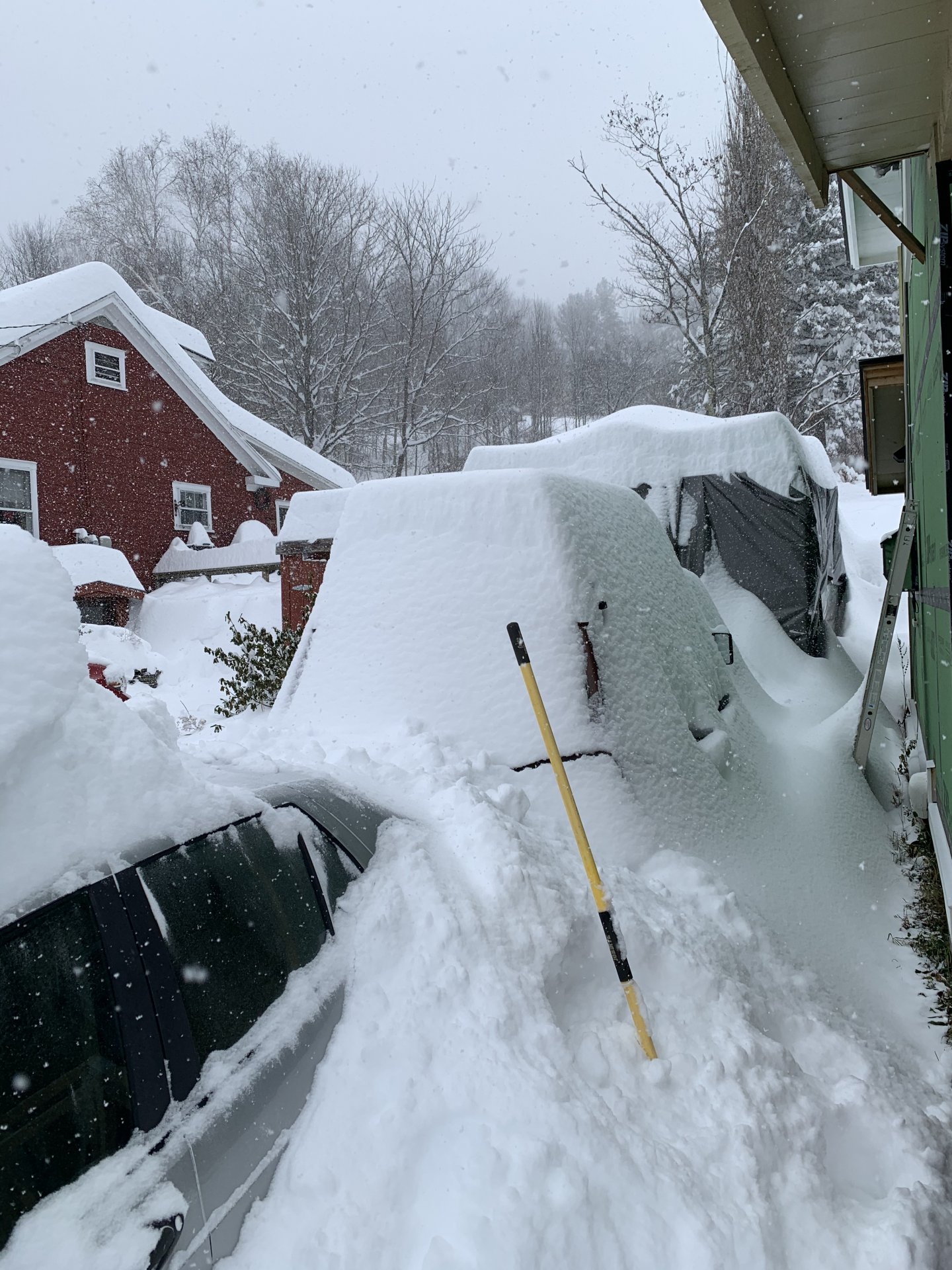 Suggestions on selling my 1987 FJ60 - your thoughts are appreciated.