Backstory: My first Land Cruiser was an '82 FJ40. Beautiful rig, so much fun, learned a lot working on it, and I blame it (and this site) for my Cruiser addiction (doctor said it was contageous, but then again you all already knew that). So, as the family started getting bigger, I wanted to start getting out and doing more expedition-style camping trips, and wanted a Cruiser that was better equipped for long-range trips. So, reluctantly, I sold my FJ40 and this summer found the perfect '97 80 series that was already built exact to my desired specs. It was in great shape and well thoughtout with the modifications to be the perfect expo rig. I bought it in Denver, drove it home to San Diego, and I had the perfect vehicle. All the mods were new: ARB bumper, winch, Lightforce 170's, Kaymar rear carrier, Slee sliders, skid plate, and light harness, Safari Snorkel, Durabek'd, OME 2.5 heavy, Treadwright 285's, etc., etc. I added some homemade drawers in the cargo area, a Serengeti RTT, and an ARB awning, and we set out on maiden voyage, a two + week camping / road trip. We did Sedona (AZ), Chaco Canyon (NM), Pagosa Springs, Silverton/Ouray (CO), Moab, Canyonlands (UT), and it was spectacular. Absolutely beautiful areas, some of which we had been to, some that were new. We were headed home after our trip, about 90 miles north of Vegas, when one of our tires blew at 70 mph, causing us to roll 4 to 5 times, landing off the freeway, in the middle of the Nevada desert, coming to rest up on the passenger side. Somehow, by the grace of God, and the fact we were all strapped into the "tank" as my wife called it, everyone was fine, and we all walked away from the wreck, albeit it very, very shaken. Many of the first responders (paramedics) were shocked to see that all of us walked away from the accident, as they said they often don't see the same positive results from these types of wrecks. So, as sorry as I was to see my new dream Cruiser ruined, it instilled my faith in it and I knew I had to get another.

So, after seeing the vehicle after the wreck, I knew there were many good remaining parts, both factory and aftermarket, that would still be useable if I were to find another '95 - '97 Land Cruiser. So my search began for another Cruiser, and I ended up finding another white one, this time a '95. It already had some modifications to it: OME 4" J's, 315's, regeared to 4.88's, Longfields, Hanna sliders, skid plate, ARB bumper with winch, etc. It wasn't as clean as my wrecked one, as the seats were torn up and such, but mechanically it seemed to be in pretty decent shape, plus I knew I might be able to switch over parts.

And now onto the build thread. I got my wrecked rig back this weekend (had to trailer it back from Vegas to San Diego), and I have already started transfering parts to build up my newer rig (the '95). I would like to ultimately get it back to how the first one was built, except with the beefed up drivetrain. I really liked how the first Imperial Land Cruiser I had was built and how it performed as an Expo rig. I am hoping I can dial this one in exactly the way I want it.

I will update the thread as I make progress, and I will try to take pics a long the way. Thanks. 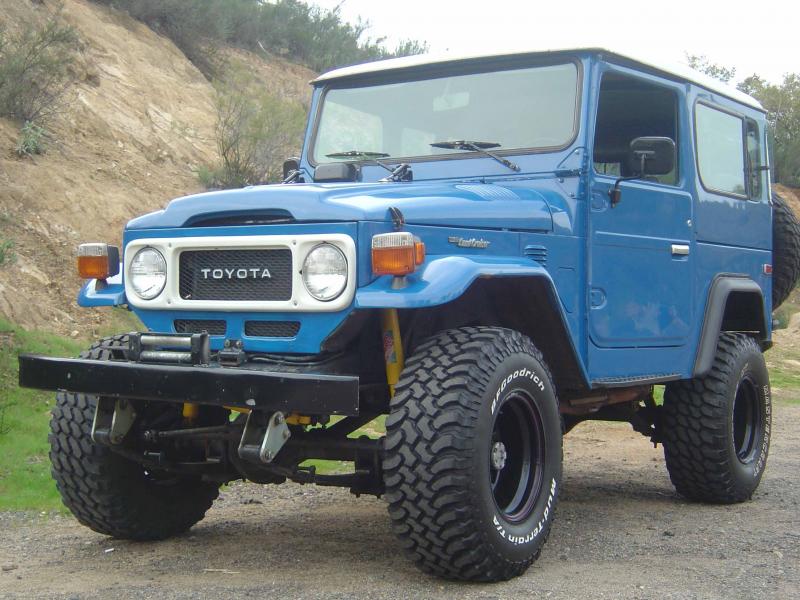 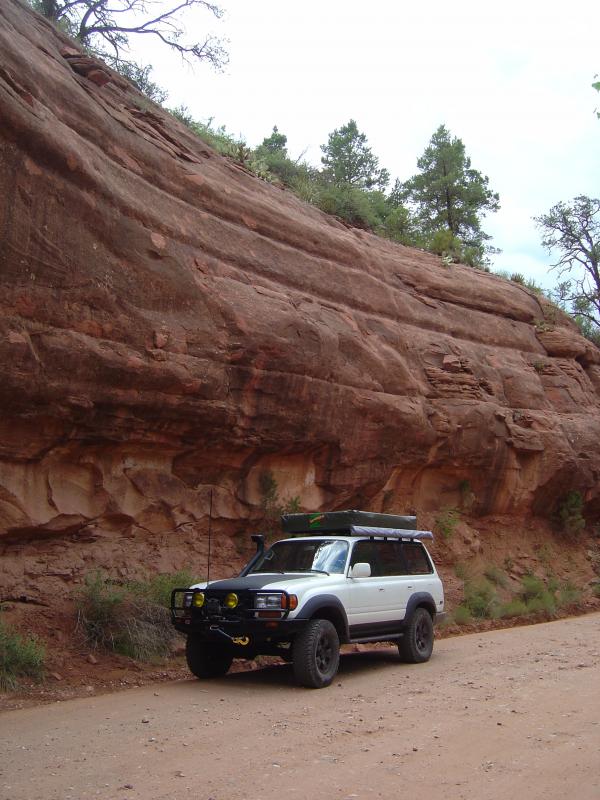 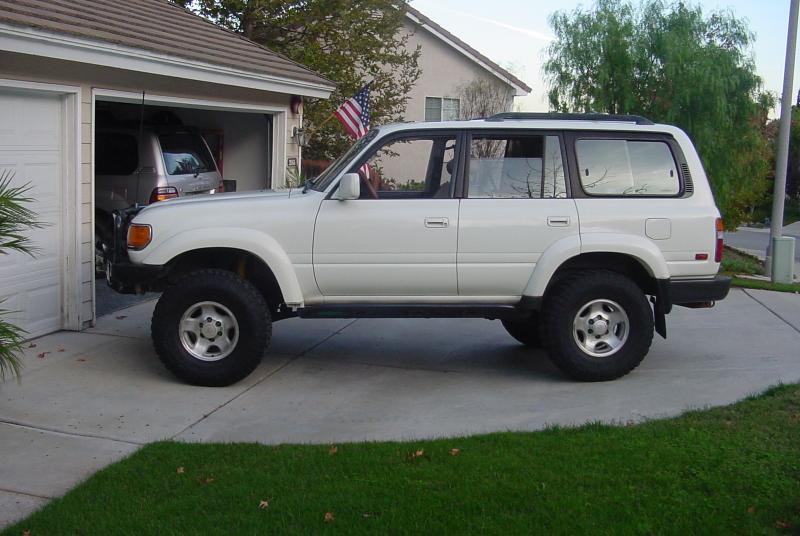 First up on the build, after baselining and fluids, was to black out the factory wheels. They were fading, scratched, and didn't have that new car smell anymore. I washed them, let them dry, and then rattle-canned them with Rustoleum Universal Satin Black. Two coats. I was impressed with how they turned out, and they've held up so far. 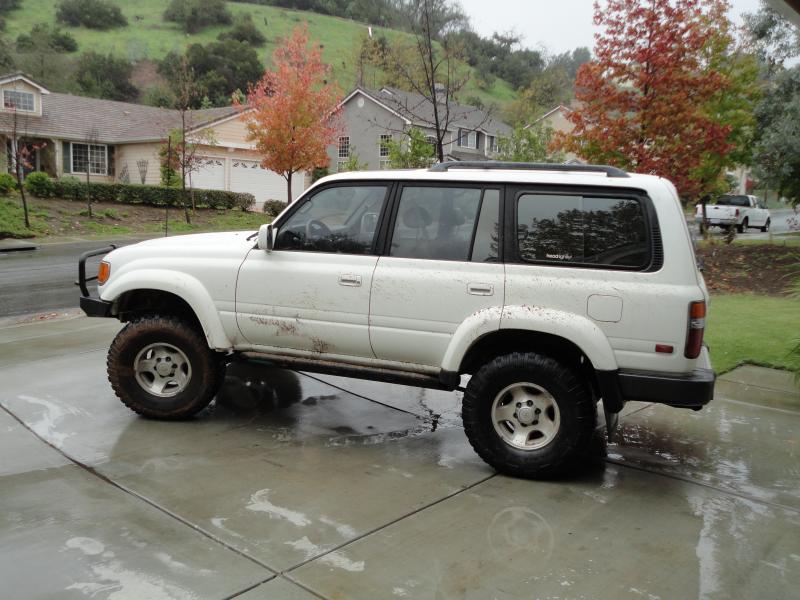 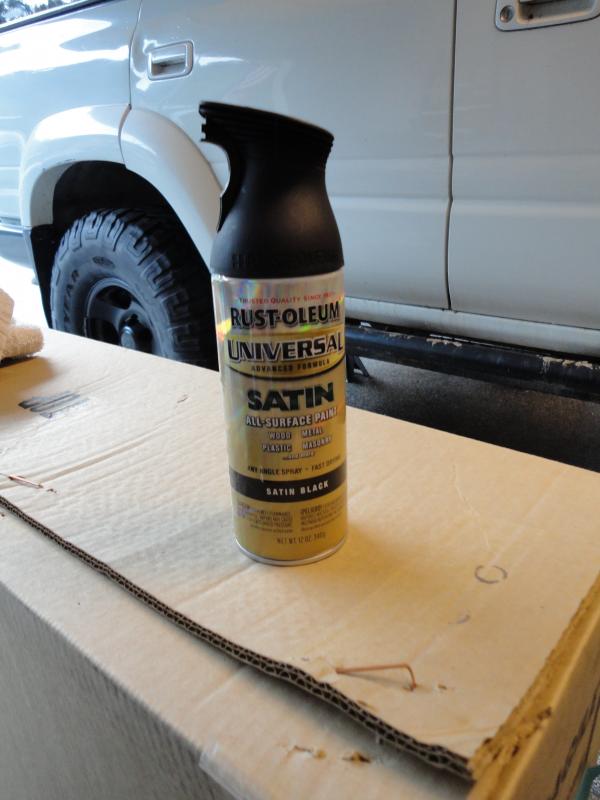 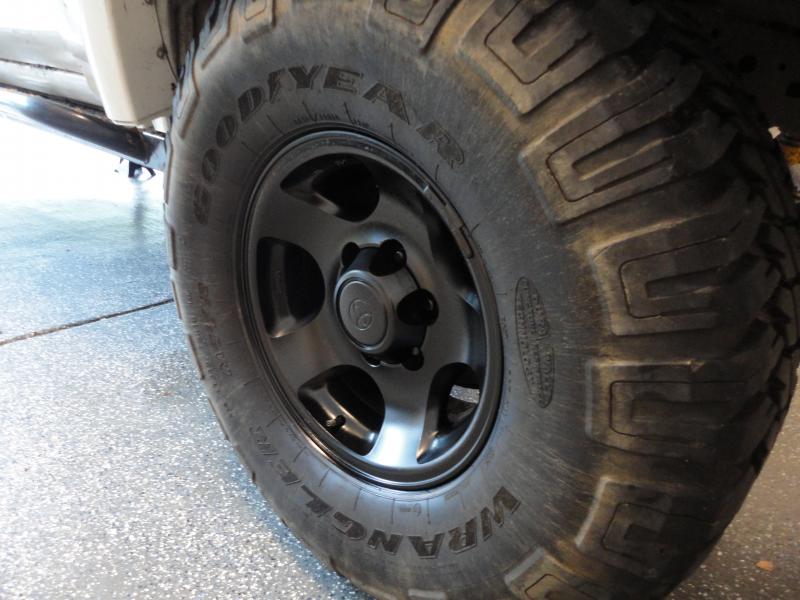 Very cool , look forward to results... seems you are well on your way!
Cruiserlessness-itis.
2021 Taco DCSB OR

Looking fwd to the build.

Where did you pick up that paint? I have been looking for a good satin black rattle can.
1994 FZJ80. Lifted, nipped and tucked. Check out my build thread for specs:

Brunt Force Trauma said:
Where did you pick up that paint? I have been looking for a good satin black rattle can.
Click to expand...

Is the transfer case converted to part time for the longfields?
1997 40th Anniversary Sage Locked

Bluetribal said:
You just shot the rims with two coats? No sanding and elbow greese? And how long have they held up for?
If so, I need to find this paint Grey or gunmettal.
Click to expand...


Nope, no real prep work. I'm sure I should have, but they've held up. I did it before Thanksgiving, and haven't had to touch them up yet. All I did was pull them, cleaned them, dried them, shot the back of the rim with one light coat, flipped them, shot the first coat, let it dry, shot the second coat, let it dry, bolted it back on. I didn't even tape off the tires, as the PO had said the paint didn't even stick to the tires when he did his. I tried to avoid getting spray on the tires when I shot the wheels, and he was right, it worked, overspray did not stick once I washed the tires.

The PO of my wrecked '97 told me about that paint, as he had used it to paint the wheels on that rig. It held up well on that rig after he did it and while I had it, and I liked that it wasn't too flat or to shiny.

I'm happy with them. It won't win any awards, but its a vast improvement from what they looked like before, in my opinion, and it was cheap and easy.

Tyler93 said:
Are those GY wrangler retreads?.....Looking forward to the build!
Click to expand...


Dude, you don't understand how NOT funny that is....

Here are some pics of that Treadwright that failed on us: 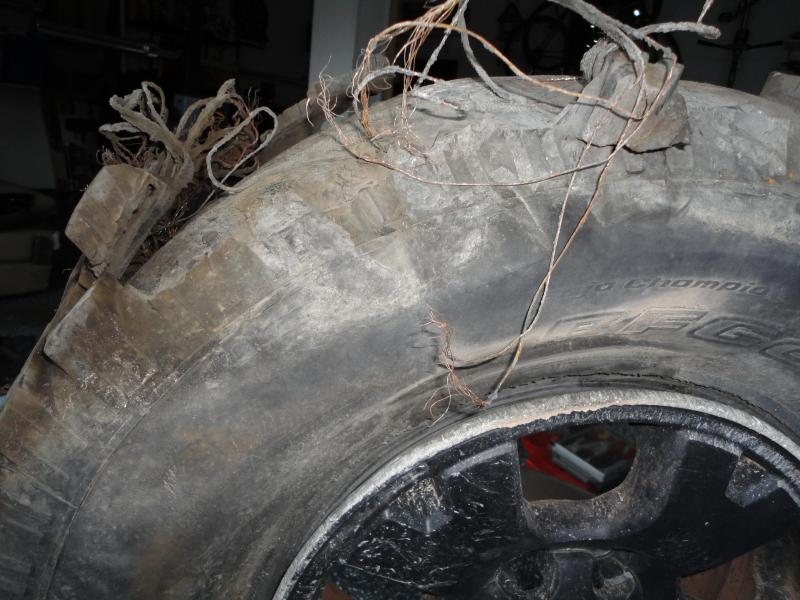 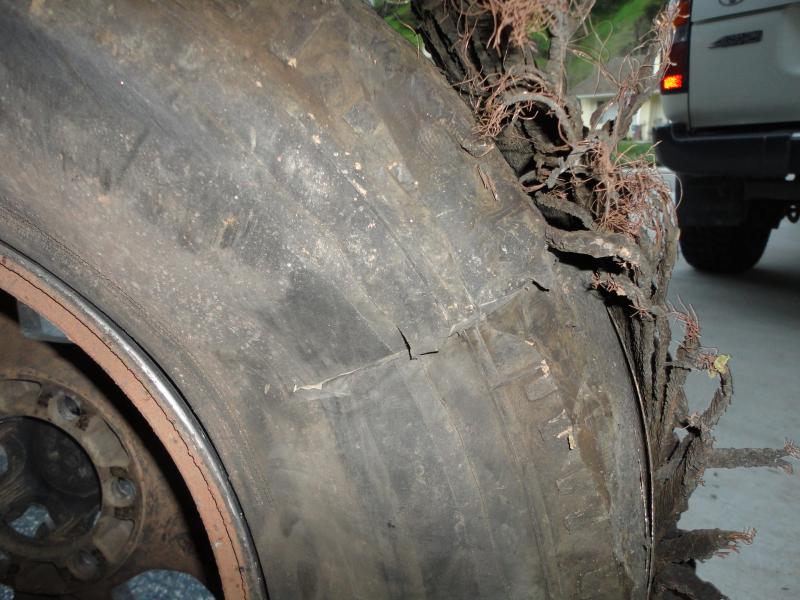 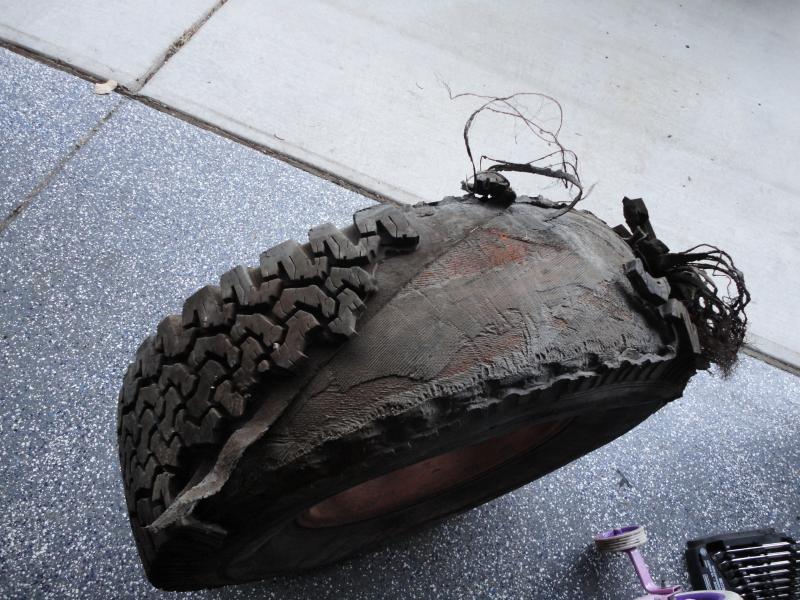 Which turned the perfect rig into this.... 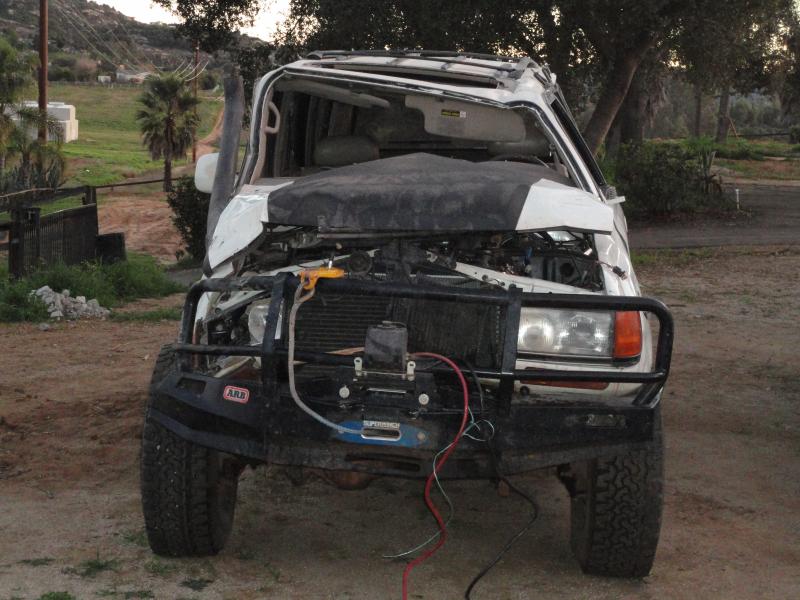 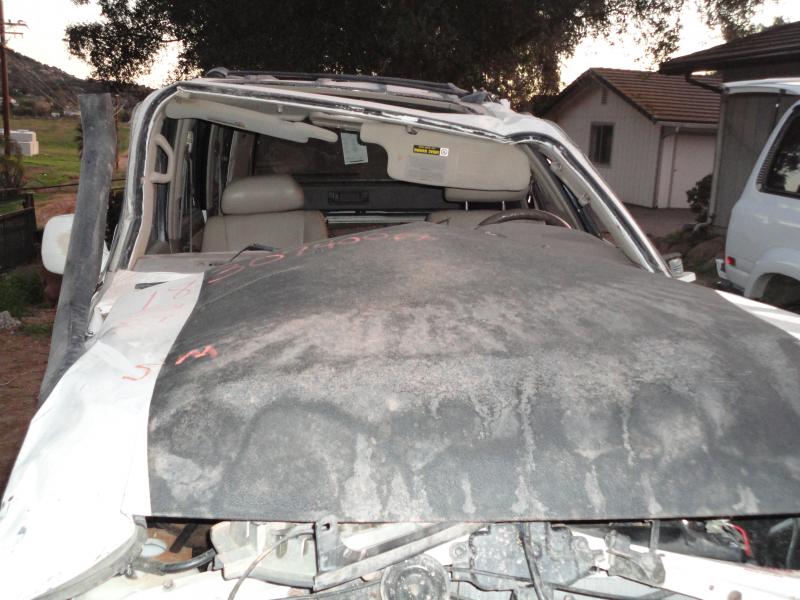 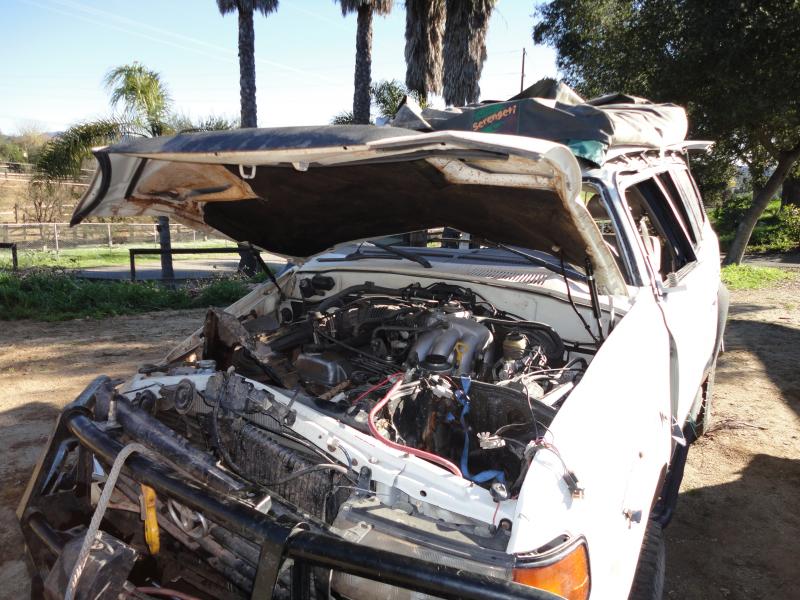 The rear shot looks like the body shifted towards the right....that is no camera illusion....it actually did twist that way from the force....

Also, I think the RTT helped absorb a lot of the impact on the roof. 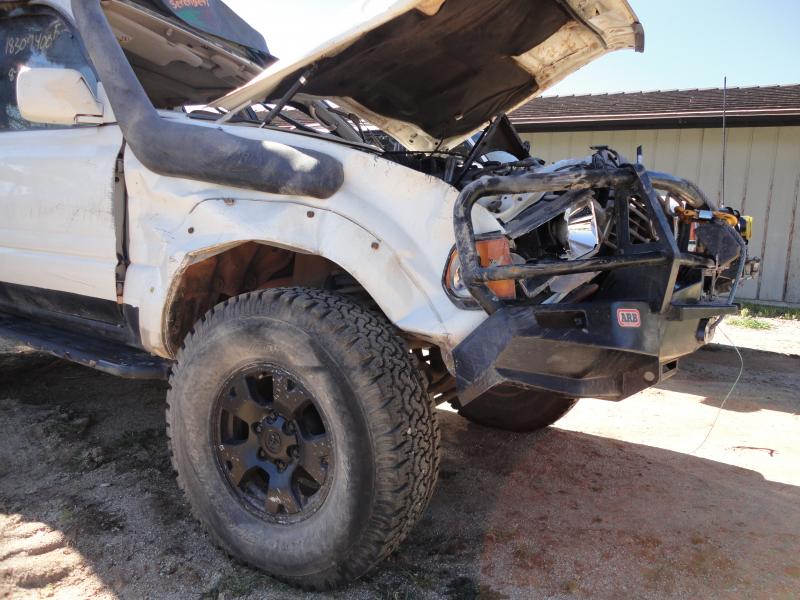 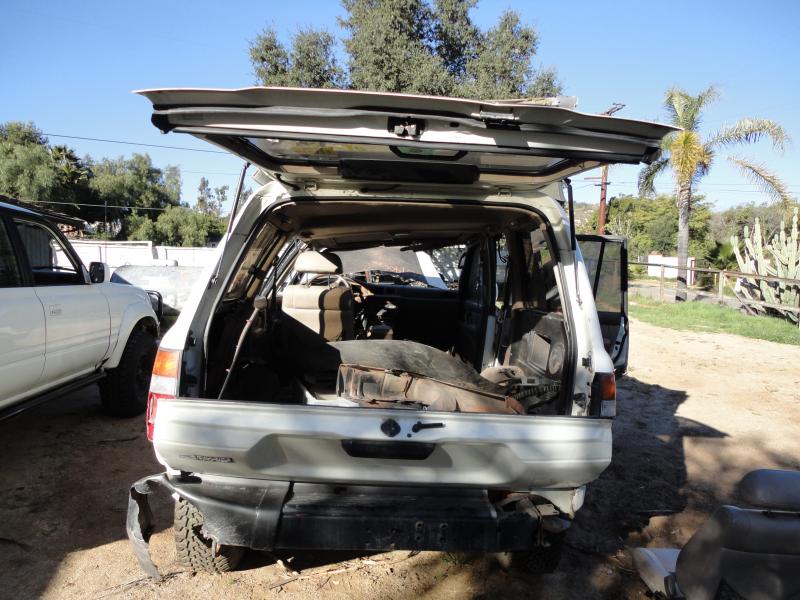 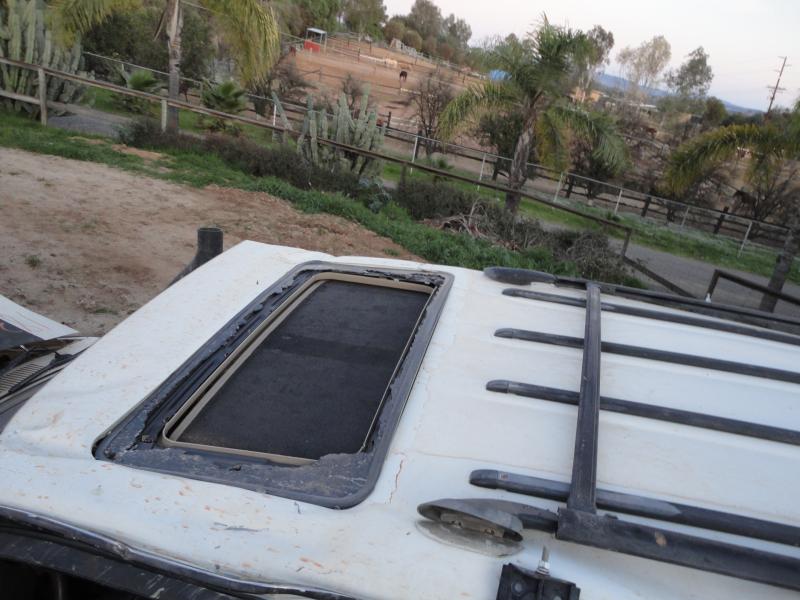 So the plans are to start salvaging good parts from the wrecked rig and moving over parts to my current vehicle where needed/desired.

First up, interior parts. More specifically, seats. The seats in the wrecked Cruiser were actually in pretty good shape, and the seats in my current rig were beat, so I started there. Easy swap, an instant improvement.

The only thing i still need to do is I need to wire in the aftermarket seat heaters that were in the wrecked rig. Since I didn't do the install, I am not sure exactly how those wire in, but I haven't started tearing into the wiring on the wrecked rig yet to figure it out. Its not a huge priority, seeing that it was in the 70's out today.

Other interior items I swapped was getting rid of the ugly, faded steering wheel cover and replacing with the one from the wrecked rig, and swapping in the transfer case shift knob that was in better shape. It looks like a completely different vehicle inside now. 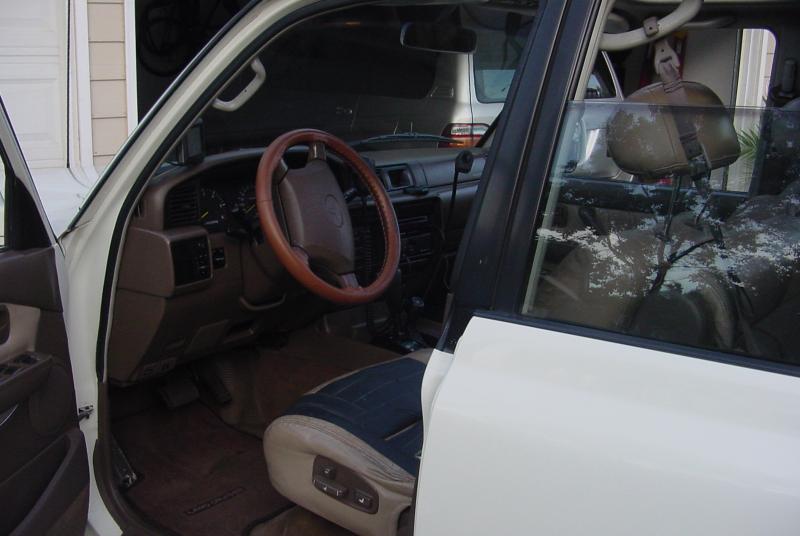 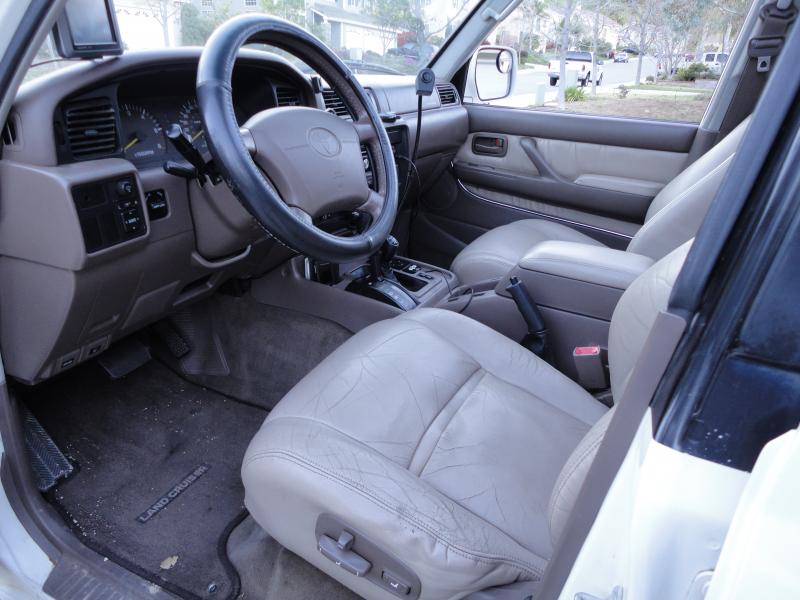 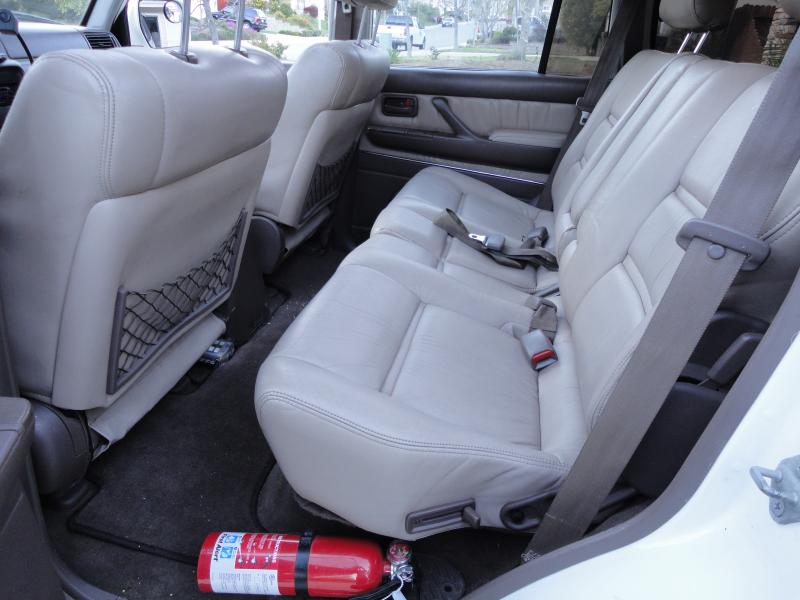 Adam,
Seeing these latest pics and knowing that your entire family walked away from this horrific crash makes me feel good about my recent decision to purchase my daughter her first car, of course, a TLC. Thanks for sharing. 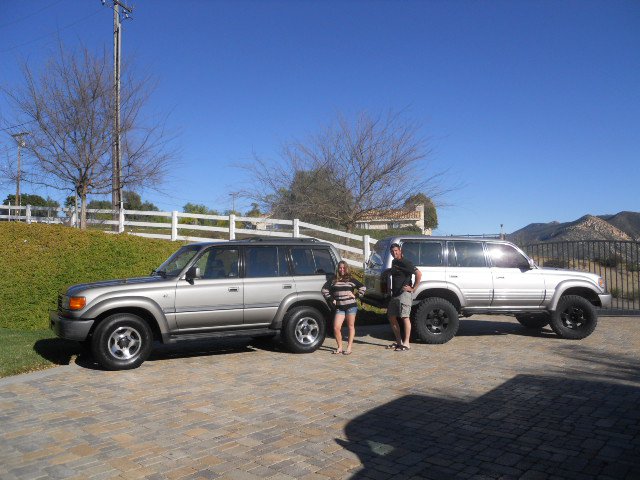 Looking good, looking forward to the progress
'96 LX450 with a few bits and pieces added on.

I also moved over the Lightforce lights. These things were awesome on the other rig. The PO had used Slee's light harness to turn on the lights when the high beams were switched on, and it worked great. The wiring harness got destroyed, so I will need to order another, but I did mount the units on the ARB bumper for now. 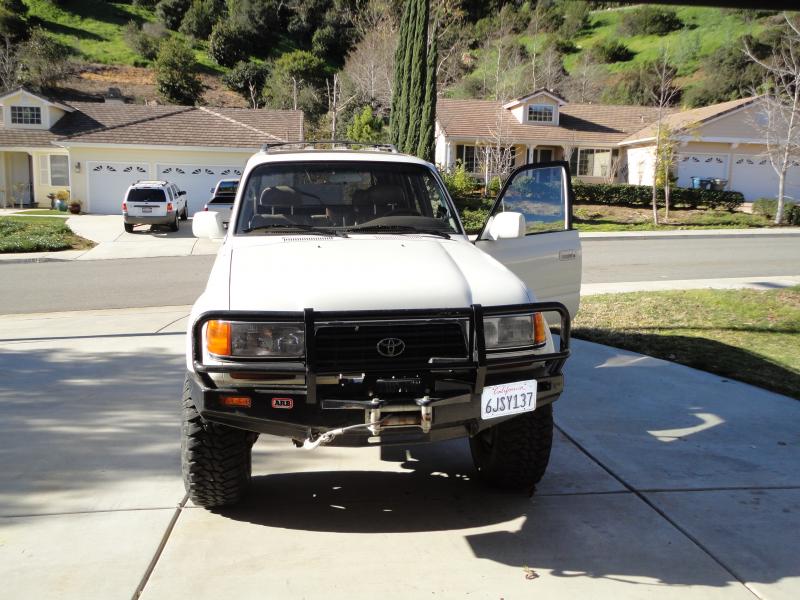 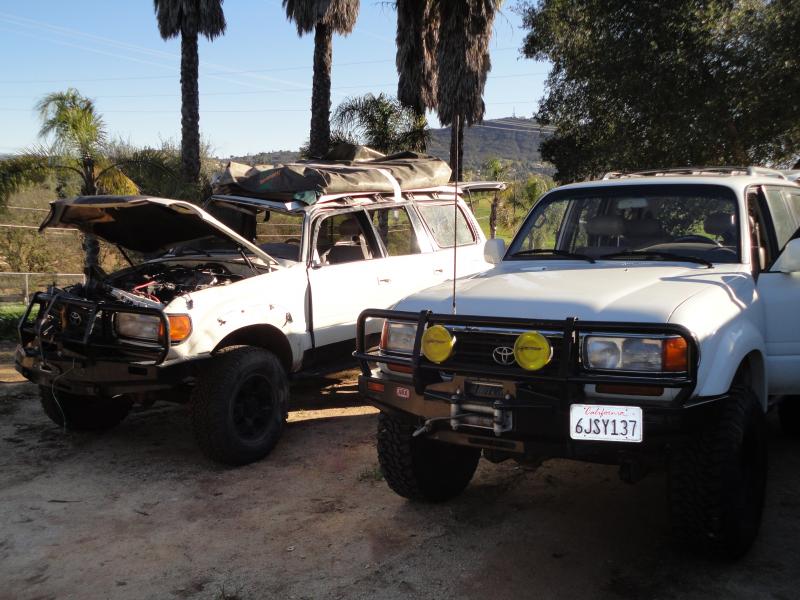 N
I finally got a real Land Cruiser
2