Hey folks, having issues with my new clutch on my FJ60 and hoping to get some debugging help.

Namely, I feel a weird sensation through the clutch pedal during some actions. I feel a sort of pop (or a weak kickback) when doing one of: pushing the clutch down, coming off the clutch, or even sometimes when i have the clutch pushed down and just move the shifter out of neutral into a new gear. I think when the truck has warmed up it goes from some actions to most. It's really disconcerting. I think this might have happened a couple of times starting from a stop, and it has the result of feeling like the clutch has just released and I've slammed into gear. Worst it makes me feel reluctant to ride my clutch in the friction zone at all once I'm warmed up.

My leading theories after taking my inspection cover off: that the front surface of the throwout bearing is still dirty and might be catching oddly on the pressure plate (my rear main seal is definitely leaking, possibly my transmission too, the bell housing is all dirty). Maybe I can disconnect the clutch fork and wipe off the front of the throwout bearing. That, or maybe I have air in my clutch fluid lines and need to bleed them some more. 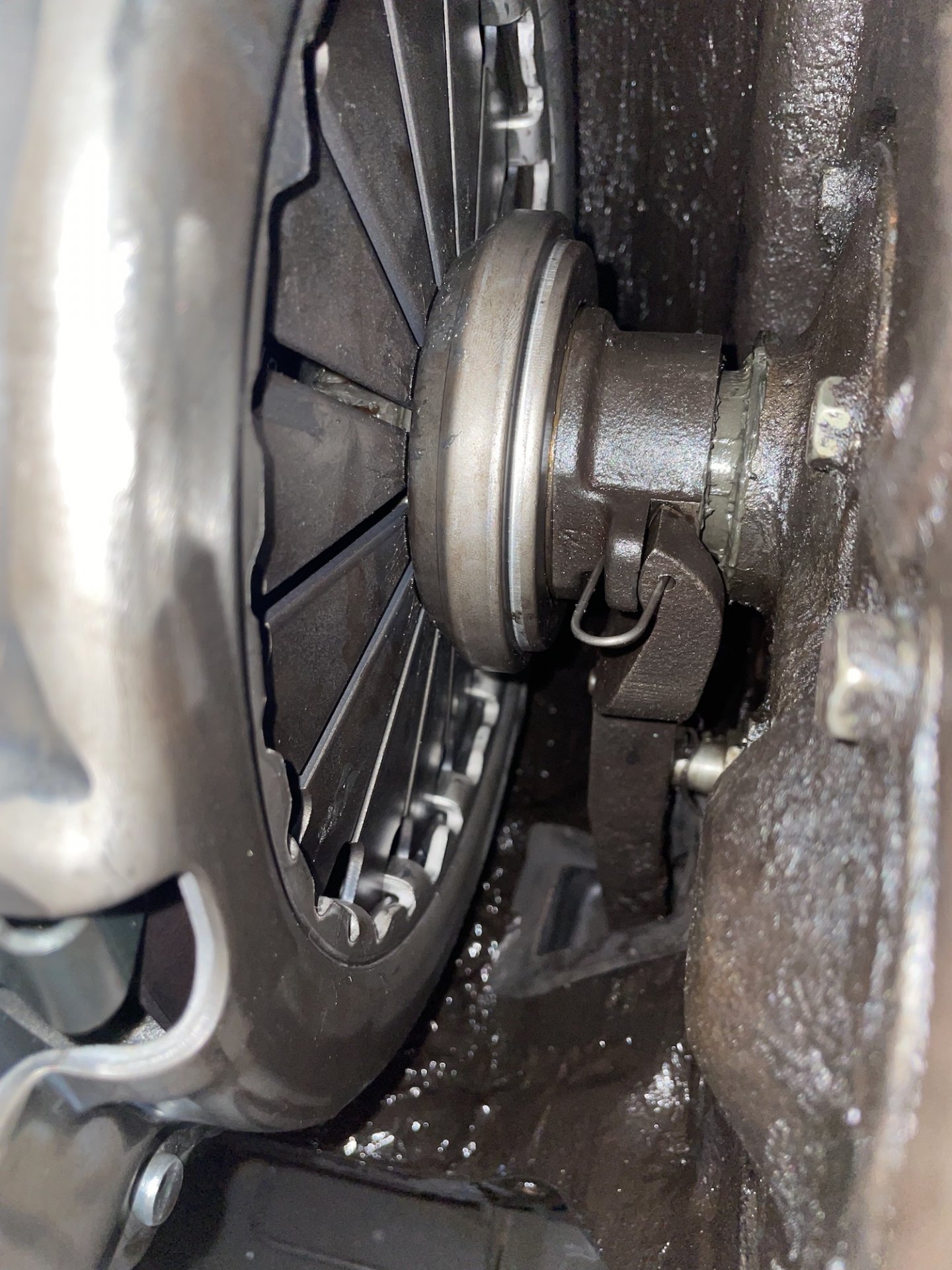 Secondary issue I have that might be related: I had to adjust my slave cylinder pushrod to be all the way out, and then adjust the clutch pedal beyond the FSM's pedal height adjustment measurement (instead of 7.13" it's over 8"), and the engagement point is still pretty low. I did get my flywheel re-machined and it doesn't look too off.

For background: I replaced my clutch two months ago with the Aisin CKT-032 kit, also got new OEM slave (adjustable pushrod) and master cylinders and hose that runs between the two. Had an issue for the first 300-400 miles/two months where the throwout bearing was squealing when in the friction zone (link), that's mostly gone away now.

Could also be that your clutch disk is not sliding smoothly on its splines. Either due to dirt or a metal burr
3

I went back and had a look at the previous post on your clutch issues.

Did you fit new bolts to the p- plate that are too long and are bottoming out, or are the bolts not fully
tightened down?

GM60 said:
I went back and had a look at the previous post on your clutch issues.

Did you fit new bolts to the p- plate that are too long and are bottoming out, or are the bolts not fully
tightened down?
Click to expand...

Oh my god... looking back at the videos, you're exactly right. ,
When I bolted the pressure plate in, I torqued it to the FSM stated 14 ft-lb, and that gap existed... I thought it was odd there was that gap but had never put a clutch together before, just kinda thought that's how it worked because I torqued to spec. I did think that torque spec was pretty low and they should be torqued higher, but... just trusted the FSM.

I did fit new hardware, I'll double-check that I haven't bottomed out. I am not sure if I loctite'd them, so I'll also do that in case they started backing out (I know I did some flywheel bolts).

OK, I'm 95% sure I'm bottoming out. Pulled out one of the new bolts (loctite'd) and its 25mm long, I bought new from O'Reilly's generic hardware.

However, the correct Toyota PN is 90119-08134 (edited) per Partsouq which looks like an 18mm or 20mm bolt from various pictures floating around... going to call up the local dealership first thing in the AM and get those bolts in. And I would say 5mm is roughly the distance that it looks like I'm off.

I remember now getting that length 25mm from a PDF I found floating around on MUD inventorying all bolts for FJ60s... allfj60-bolts-97-2003.pdf. That's the last time I trust that PDF! 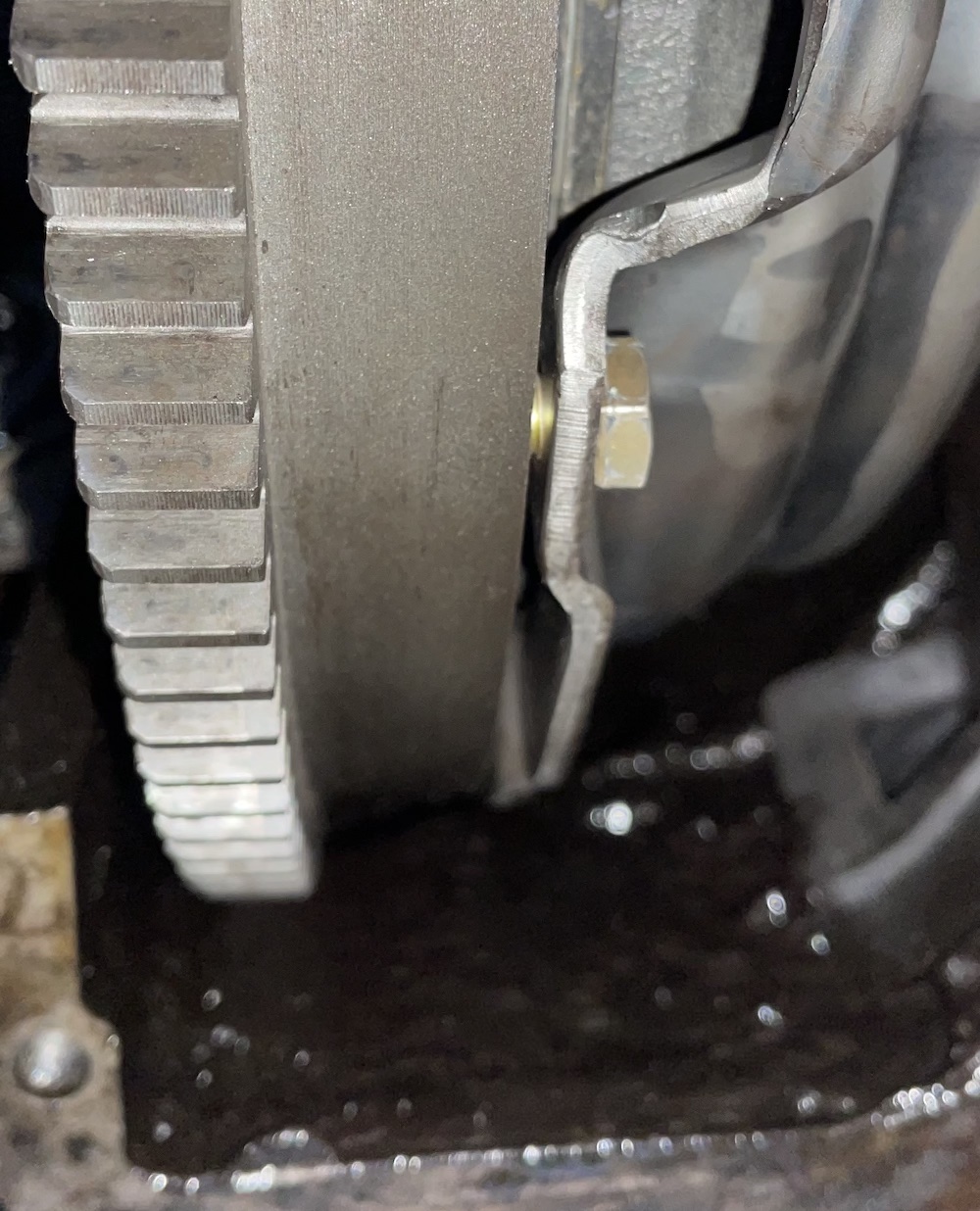 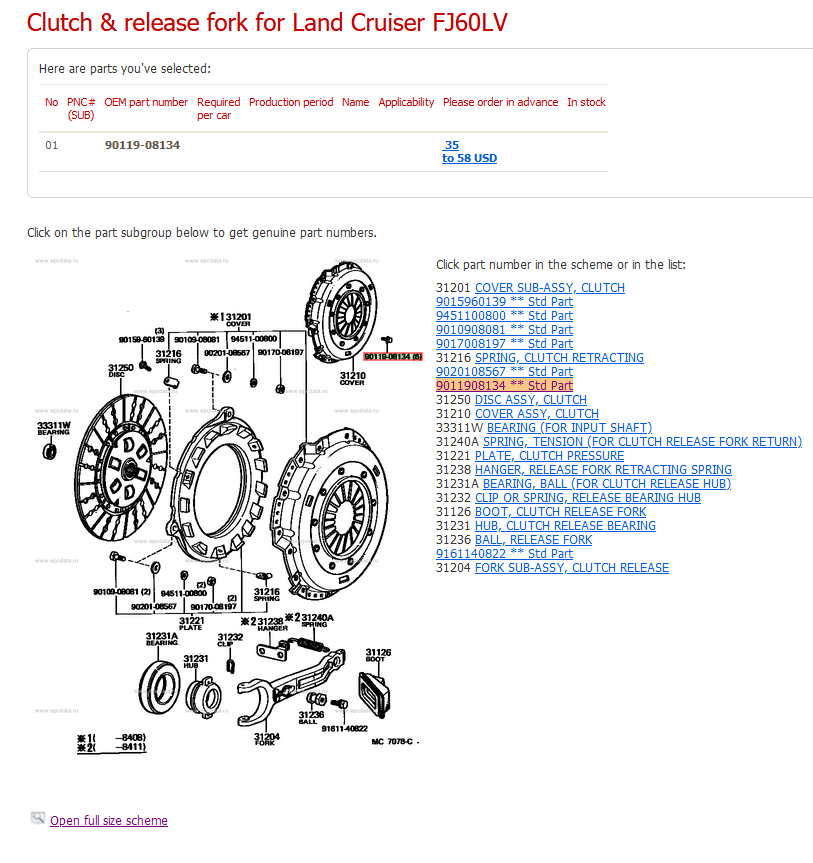 Sorry yes, you’re right, thank you for the catch. Was confusing it with some FJ40 clutch-cover-to-flywheel bolts I found.

For anything at all critical, I always use OEM hardware when available.

Are those generic bolts even grade 8.8 ?

I would never use anything for that part but an OE bolt, if available. Plus, those bolts need a lock washer - That's why the OE is a sems.

Luckily, you won't need to remove the trans to replace those bolts.

I've been hit and miss on OE bolts for things I thought were non-critical (e.g. recently replaced driveshaft bolts with OE but not these). The stealerships around here charge >2x over list price even when you challenge them on list price, and I tend to be impatient since its almost always next-day... but that's going to change from now on.

Alright, new OE bolts in just fine, did a few passes torquing it up, then re-adjusted the slave cylinder pushrod and pedal height, drove it around the block, and... the clutch feels great. Until I took it for a spin around the block, I didn't realize how nervous I was and how awkward and odd the clutch felt - not only the popping behavior I talked about previously, but just how gingerly I was using it and how naturally smooth it feels now. And also the pressure plate fingers look like they're more tucked in to my eye.

I will have to re-visit pedal height since I didn't have a tape measure on me, just lowered it (from where it was previously, which was too high). I thought the engagement point was initially too high but it got better when I lowered my pedal height to closer to FSM spec.

Does my slave cylinder pushrod positioning look right (as shown in the spacing between the throwout bearing and pressure plate)? I think I have it ok. I've never seen a FSM that had guidance on this, and haven't seen much on MUD either. 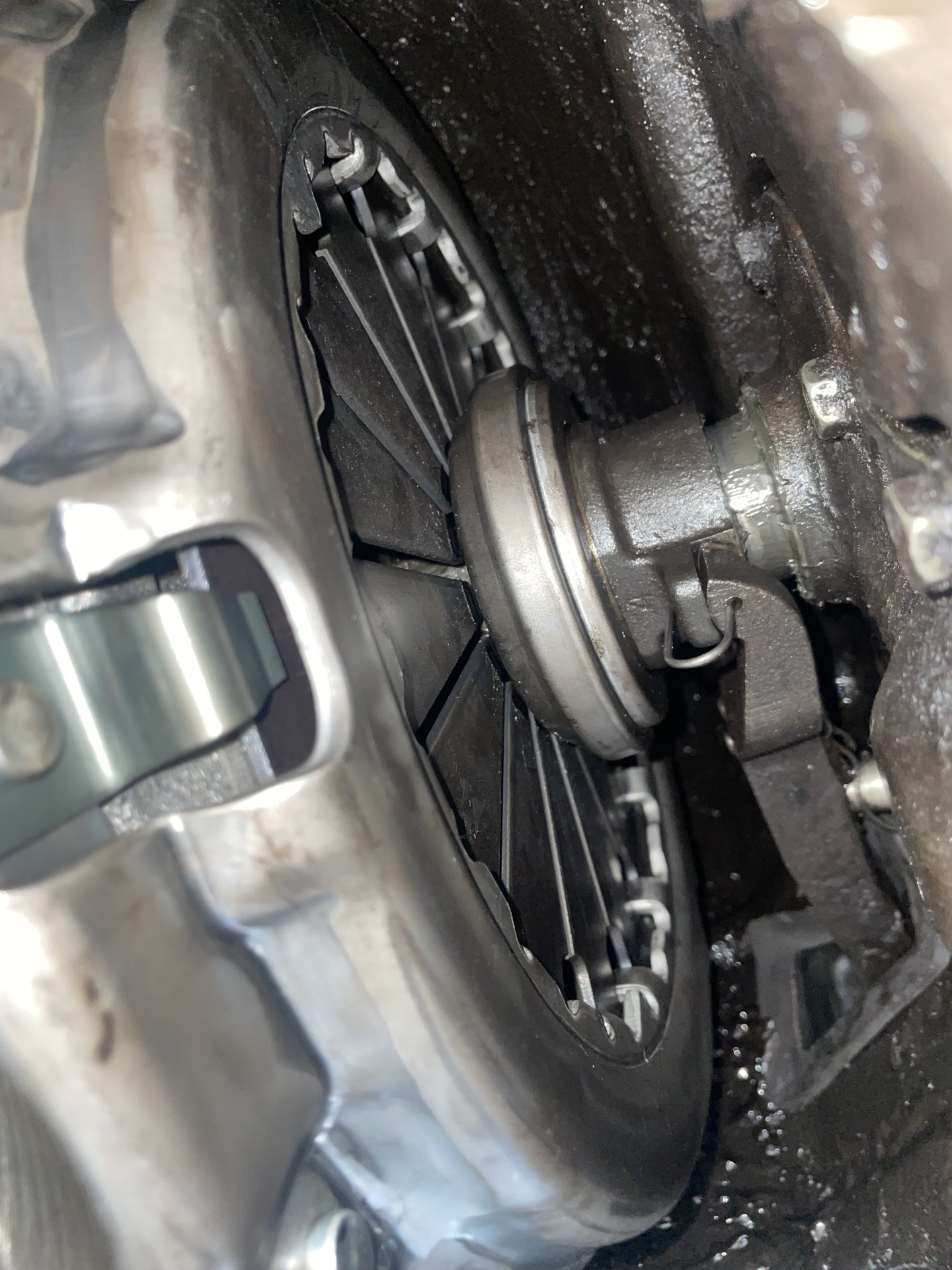 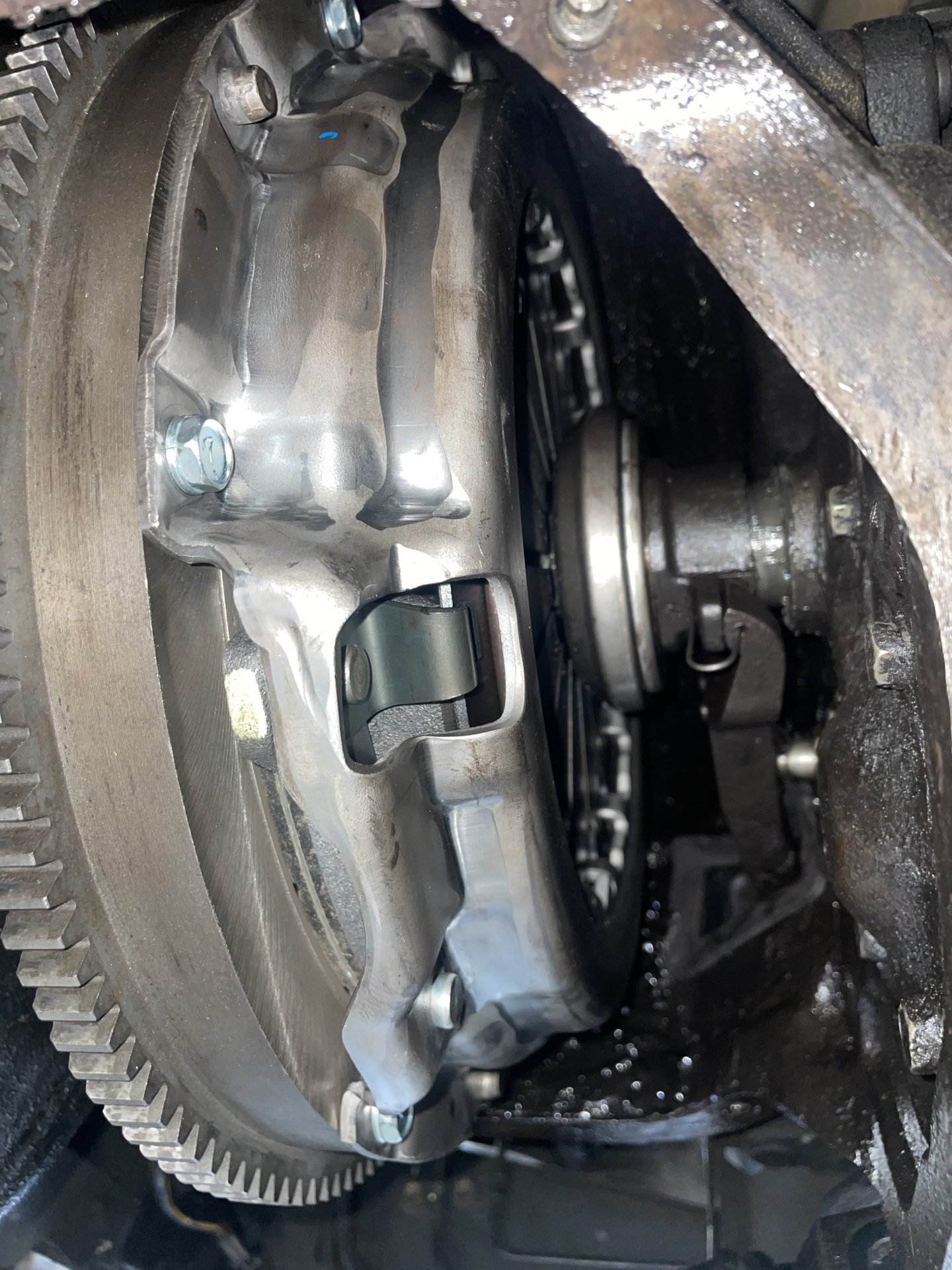 On the later model FJ60s (86, 87) the clutch slave cylinder automatically adjusts the pedal height. On those vehicles the clutch begins to move when the pedal is pushed down just a little from relaxed. There isn’t much play at all between released clutch and working clutch. You might be able to use that behavior as a reference. 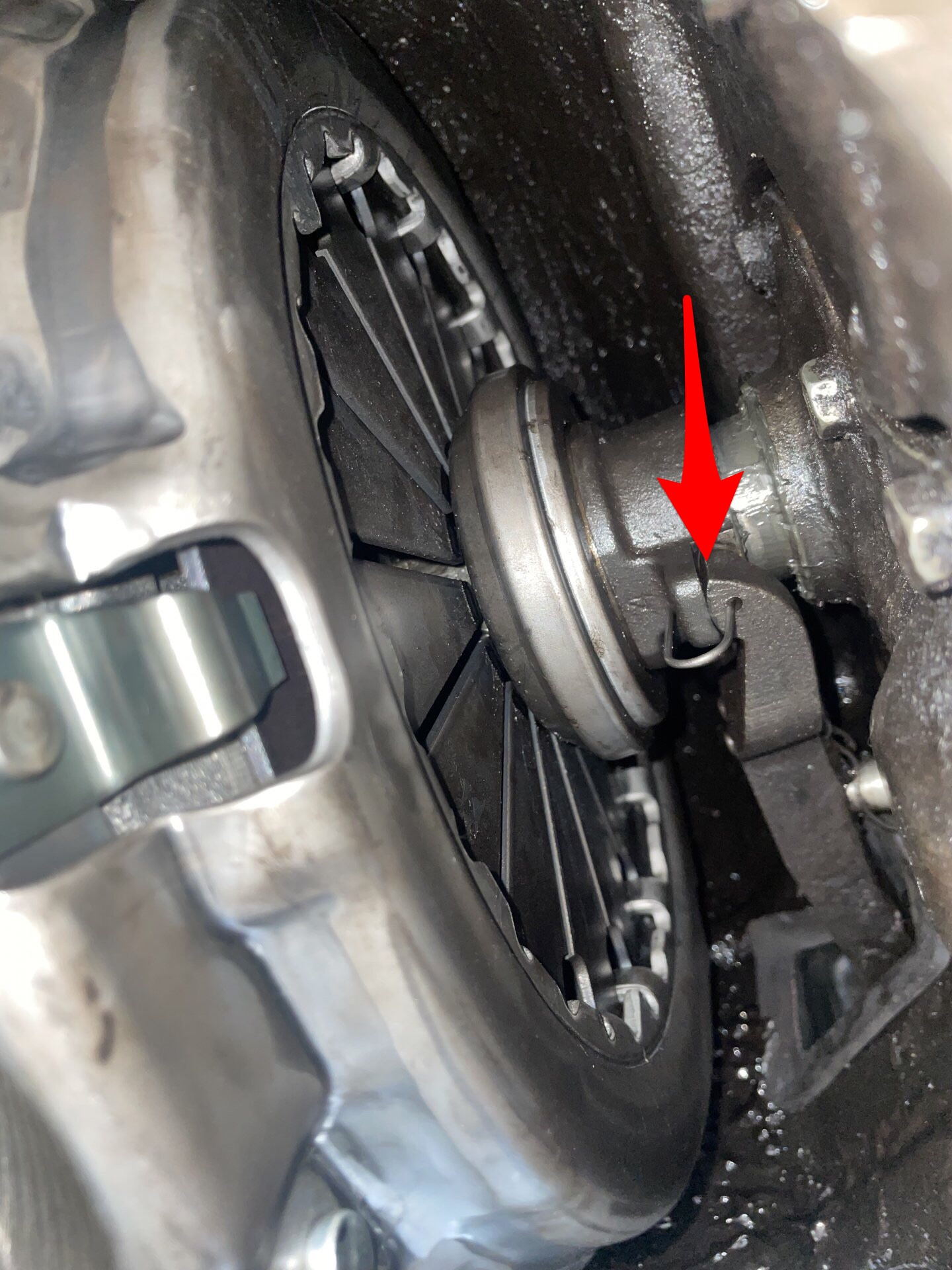 I forgot to follow up... I set the pedal height properly per FSM, then played with the pushrod cylinder a bit intuitively (didn't measure there), added more grease (thanks @OSS), and everything feels great. Have put 500 miles on the clutch since then. Feels just as it should! Thank you @GM60 and all

Glad to hear you got it sorted.