Explaining the overheating scenarios in detail a bit so as to help experts get the full view. Travel done with 6 occupants and their luggage, nothing too heavy just what ud carry for a week long trip, utilised the roof rack

1st heatup: attributable to my fault, this is the 1st diesel in ownership and i was gunning it and pretty ok to keep it mashed to the floor and above 2k rpm for steep ascents. We climbed from apprx 11.5 k feet to 13.8k feet in approx 10-12 odd kilometers, with the last 5 km having the steep stuff, all of a sudden i felt the car not having any power in 2nd and transmission shifting back to 1st, tht happened for arnd 8-10 times by which time theeir was no motivation in 1st either, and more or less complete power loss, check engine light came on so i parked it on the side, put in in neutral for a bit...opened the hood the fan was working....after about 2-3 minutes shut it down and let it cool for around 10 mins .this happened a couple hundred feet from the top of the mountain pass so after the rest it fired right up, got to the top. The coolant reservoir took approx 1.5 litres of additional water . Just to add , a lot of steam was seen initially from the to of the engine around the head gasket area. Anyway, it continued without any hiccup after this for the descent and onwards travel on almost straight tarmac ( just to add the mountain pass was all tarmac too) the car took a non stop journey of 5-6 hrs in temps ranging from 37 degrees celcius to 19 degrees celclius without any issue.

Get it checked up the next morning, the head gasket was intact, the oil was good thankfully, however the thermostat was stuck. Due to non availability of the part , we did without the thermostat as cabin heating wasnt a requirement. Anyway, next task was another climb , arnd 6 km and steep inclines .....from 8ish k to a bit above 10k feet. The car did not exactly heat up with the check engine light per say but it was mighty close to the top bars bordering on the red zone a couple of times, got to the top, cooled off the radiator externally and all was well.a top up on the radiator reservoir was called for ( i guess the lower boiling point at such heights plays its part too) The same drive up was done r times in 3 days and it kinda got better with me trying to keep it in the sweet spot between 1.6 to 2 k on the rpm, not lugging the engine or 1revving it too hard. Last couple of tries we got there with a couple of bars below the redzone on the temp indication.additions in water reservoir were a requirement everytime thought....and you could hear it gurgling and boiling almost everytime you got to the top.

The next and most challenging climb (again tarmac) consisted of a 9k feet climb in approx 45km. It went well the 1st 4-5k however as soon as it hit apprx 9k feet above sea level the needle started rising. Being mindful of this i pulled over twice before the main ascent of the last 2-3 k, and topped up the reservoir, said my prayers and went like i was walking on eggs whilst not lugging the engine 9(for context, new sedans like the corolla and civics were zipping up this ascent no issues at all)Thankfully no more issues, and strech of 200 odd km, including a motorway stretch of 110kph for arnd 80 km brought no issues.


A week later took it to another trip with a max height of 9k feet and gentler inclines , and it all went without a hitch, the needle just once moving slightly past the half way point and back in arnd half a min.

Sorry for such a long writeup ,however needed to put it up to get some clarity:
- what could possibly be the reason for such heatups? Ami doing something wrong in the way i drive?
- could it be the radiator? The other 3 culprits (pump,clutch and thermostat) seem to be outta the picture,unless iam missing something. The gasket was found to be fine, just to add
- considering its an LC100 , its supposed to be engineered to take all this in its stride, isnt it?
- also, the oil pressure seems to be always stuck at 1/4th no matter up down heat up no heatup, however when travveling north of 60 mph it starts going up ,ease up and starts to fall.

Need to get to the bottom of this as the primary reason for getting this vehicle was mountain terrain travel with the family, and reliability & dependibility is key. Thanks !

Your first overheat was a stuck thermostat. BUT here is the problem with removing it, the coolant will flow through the radiator to fast and it will not be cooled thus not cooling the engine sufficiently. You need to replace the thermostat.

As for your oil pressure, what motor oil are you using? Petrol oil or diesel oil? You must use diesel motor oil, a 5w-40 would cover all climate ranges except maybe the hottest of days.

When a engine starts to overheat turn on the heater to full "HOT", this will pull additional heat from the engine.

The best way to climb steep grades with a diesel is to take it slow and steady. If you start to overheat turn the heater on, if you continue to overheat pull over and leave the engine running, diesels run cold compared to petrol engines and will actually cool off when on tick over and will cool quicker if left running, as long as there is coolant in the cooling system that is.

In fact, on a cold winters morning a diesel will not ever reach full operating temp if the rev's never go past tick over, it will heat to about 54*C and never get warmer no matter how long it runs, diesels need a load and revs to get hot. This is because they are more efficient at combustion than petrol and there is less wasted energy via heat soak.

So, replace the thermostat, make sure there are no air pockets in the cooling system and next trip turn the heat on, don't push the throttle past 3/4 and you get there when you get there.
That's why lorries take forever and go so slow climbing big hills. They will overheat and they loose power if pushed to hard.

I hope this helps.
L

Thanks for the response. Yes a new thermostat is in order. Running a 15w40 as normal operating temp ranges between 0 degrees celcius and 45 degrees celcius throughout the year(however vehicle hasn't encountered those extremes as yet)

Also,by your response i figure there are no tell tale signs of a radiator issue?

Had similar problems to you, overheating and oil pressure always at 1/4.

When driving faster that 110kph / 70mph, climbing hills, driving in reverse for a long time or offroading (sand, slow driving through vegetation, etc.) the LC100 with 4 speed and 1HD-FTE got hot. Turning up the heater solved this problem. I first suspected fan clutch, thermostat etc. The radiator looked clean from the front but my radiator was a bit dirty from the inside from driving through deep muddy water (bow wave over the hood). I haven't had it since I spend some time cleaning the radiator thoroughly (but do not damage the fins).

I would suggest to clean your radiator, make sure to get everything out of the fins.

Since you replaced the water pump before the trip, there is a chance it was not burped properly (or not at all). There was plenty of air in the system which caused it to boil.
Replace the thermostat with OEM.
Check for leaks under pressure.
N

Replace the radiator, if it is old about 6 years. Flush the cooling system without the thermostat, then install the radiator oem or denso. You probably have a clogged radiator. Hope to have a working fan clutch, oem or aisin.

Didn't over heat but had been topping up coolant and water weekly (or after each long fast drive between 85=100 mph for 250 miles). Radiator looks clean but about a year later the radiator gave up. 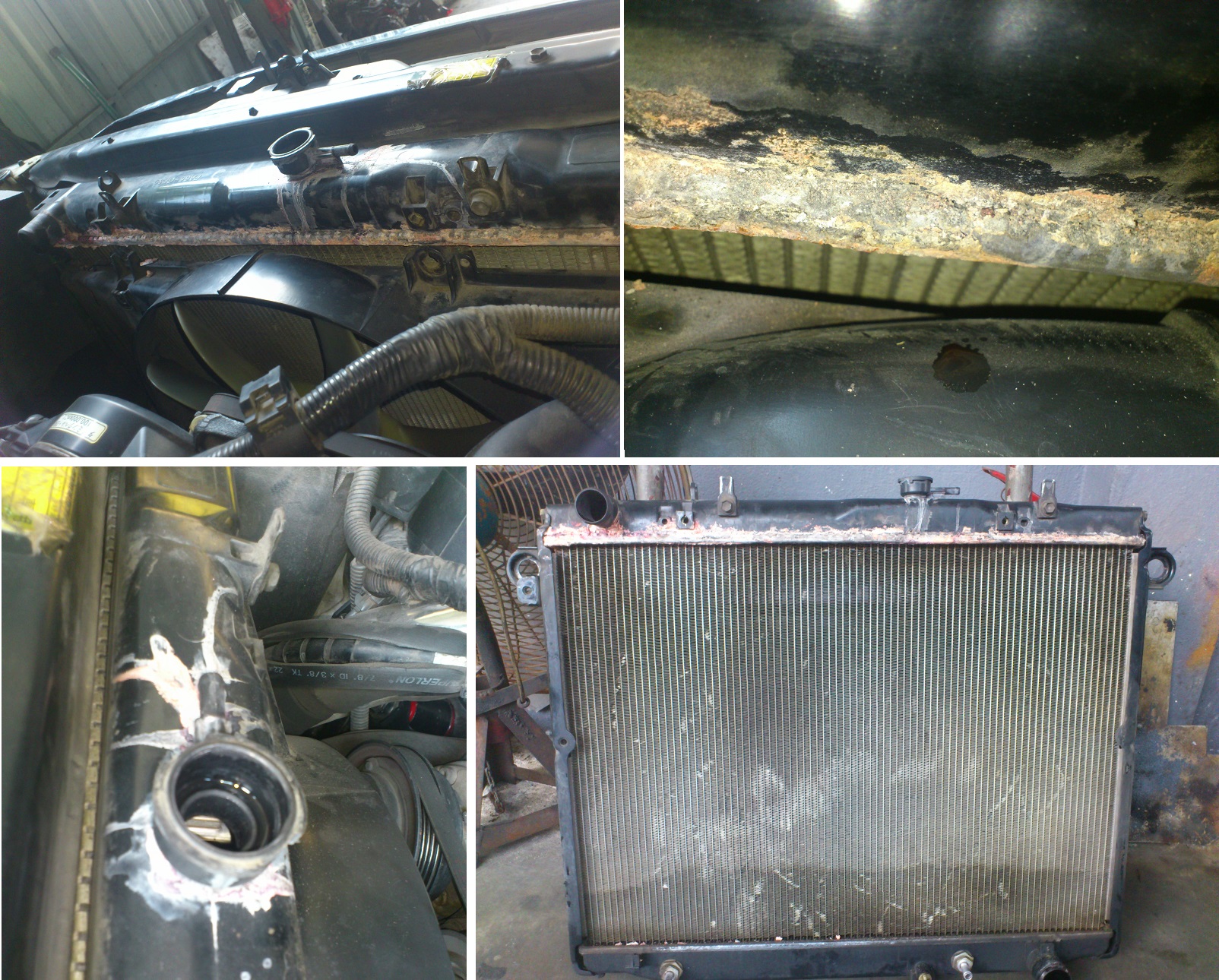 Thanks everyone.Yes im hunting an Oem radiator hope to get this done soon.
Its the original from factory and the vehicle is around 110k miles and 15 plus years so wont hurt getting it replaced
N

Just curious your location. When I drove my 4runner/hilux surf in northern California over Sierra Nevada mountains with its 13 year old radiator, engine started to heat up. I saw that on the temp gauge so nothing bad happened. Replaced the fan clutch anf no luck. Radiator seems to be good but went ahead and replaced one with a denso. Problem solved. I found 31 out of 43 coolant drains were 100% clogged. I now replace radiators every 5 to 7 years.
L

nissanh said:
Just curious your location. When I drove my 4runner/hilux surf in northern California over Sierra Nevada mountains with its 13 year old radiator, engine started to heat up. I saw that on the temp gauge so nothing bad happened. Replaced the fan clutch anf no luck. Radiator seems to be good but went ahead and replaced one with a denso. Problem solved. I found 31 out of 43 coolant drains were 100% clogged. I now replace radiators every 5 to 7 years.
Click to expand...

I am in Pakistan, the drives were on the karakoram highway and babusar pass.
N

Buy a brand new radiator core and soler it to the top and bottom tank which I think are copper. Dont use a used radiator from Japan or Dubai. You never know its conditon. If you plan to buy a compete radiator, make sure the top and bottom water inlet and outlet are not on the same side of the radiator.

Islamabad-I can only imagine what the mountain driving adventure could be like there; sounds very exciting.

You didnt mention if you were driving in LOW range during your ascents or what gear you selected to climb in. If not in the correct low gear you’ll heat up quickly.

For parts sourced from MiddleEast try here:
PartSouq Auto Parts Around the World

LCJunky said:
Thanks for the response. Yes a new thermostat is in order. Running a 15w40 as normal operating temp ranges between 0 degrees celcius and 45 degrees celcius throughout the year(however vehicle hasn't encountered those extremes as yet)

Also,by your response i figure there are no tell tale signs of a radiator issue?
Click to expand...

This does NOT sound like a radiator issue to me.
L

abuck99 said:
Islamabad-I can only imagine what the mountain driving adventure could be like there; sounds very exciting.

You didnt mention if you were driving in LOW range during your ascents or what gear you selected to climb in. If not in the correct low gear you’ll heat up quickly.

For parts sourced from MiddleEast try here:
PartSouq Auto Parts Around the World
Click to expand...

wasnt in low range gear as i was on tarmac, and low range automatically engages the center diff.
Which reminds me, can anyone guide me to the how to/tutorial for disengaging the auto center diff functionality whilst engaging low gear ( i remember the mod was pretty easy on the 80 series)
You must log in or register to reply here.
Share:
Facebook Twitter Reddit Pinterest Tumblr WhatsApp Email Link