Time to start a thread on my build, started this in Nov, but plan to put it in high gear now.

Picked this 1962 fj40 up off Ebay with a buy it now. Located in Roanoke Va, we went and picked it up for the 800 mile tow back home. PO bought this a few years ago and never even tried to start it. PO from him told him id was running. 2 PO's ago started a body off restoration all they did was take it apart and started some body work. The PO I got it from did nothing other then buy 2 other early 60's FJ40's and take a lot of the parts off of them, which were included with this. After a lot of searching on the ih8mub.com site I found this same fj40 being discussed when it was on Ebay at which the PO bought it, and even found posts from several years before that where somone was selling it on ih8mud, they even posted the vin number so I know it was the same one. So from these I figure probably 5 years since it has run. 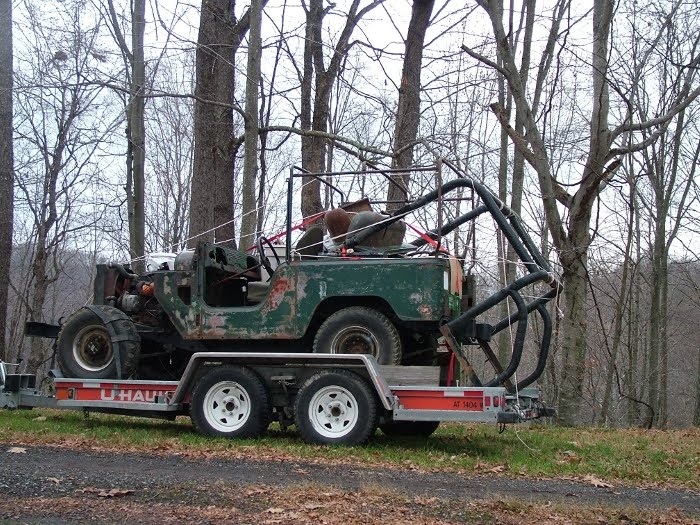 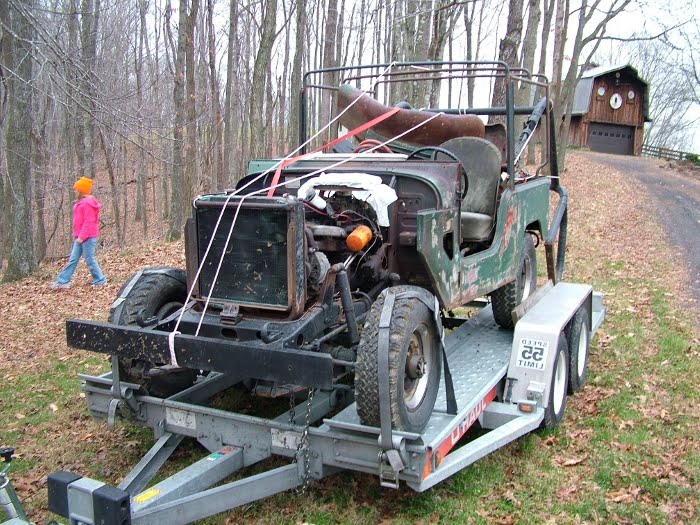 Before the long haul home me and my son decided to assemble the parts, both to cover the engine as well as just have some
fun with out new toy. Looks much better with just a little work. Then we had to pile all the parts back into it for the long ride home. It came with lots
of extra parts. 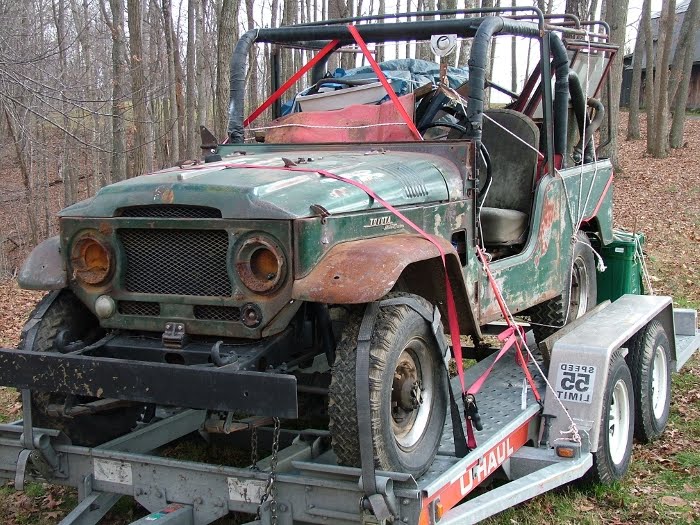 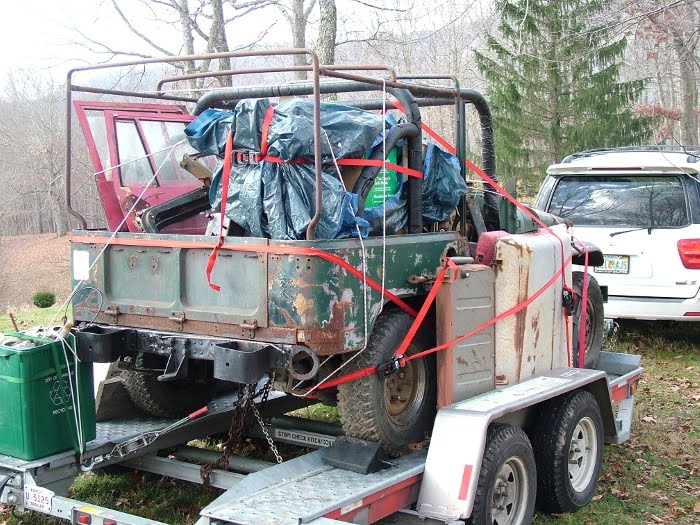 All full and ready to go. Did not get any pictures, but when we got up for the tow home it was snowing, made for a long drive
towing this over the high peaks of WV in the snow. But we made it, and unpacked it and got it into the garage. 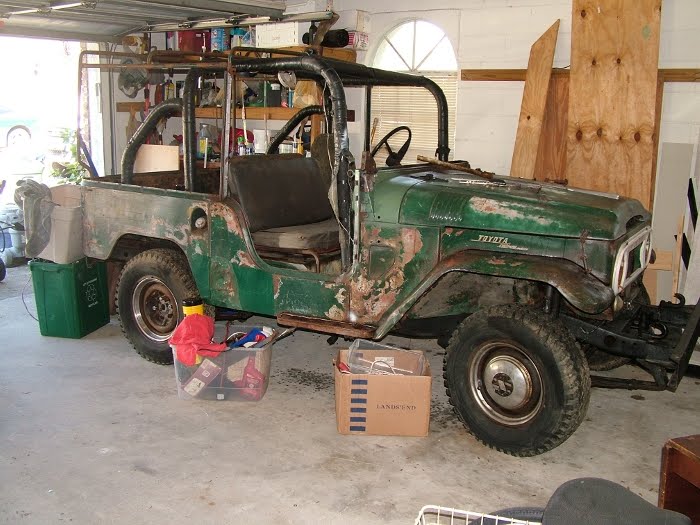 Once in the garage I wired up a universal ignition switch. I had put Marvel Mystery oil in the cylinders the day I picked it up
and more when I got it home. After a week of soaking we turned the motor over, charged up the battery did a compression test.
about 140 and up on each cylinder with a cold engine. So with that we turned on the juice and sprayed some starter fluid
down the carb and it fired right up. Ran a hose from the fuel pump to a gas can and started it up and it idled just fine, sounds
very good. Carb nees some cleaning, it will not start without starter fluid, but it runs very nice once started.

We had picked up a 1980 fj40 off CL months before. It came in the same shape, not running for a while and already taken apart.
We had not even started it yet, it got put on the back burner and is now a storage for all the extra parts. 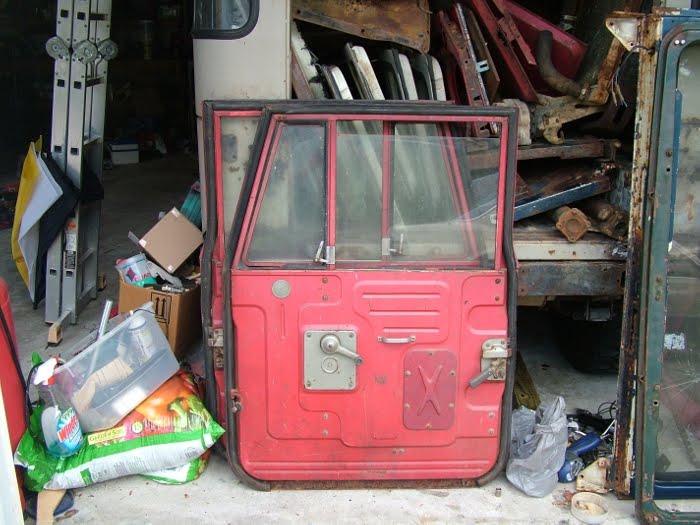 Poor fj, has several drive shafts, 2 sets of Ambulans Doors, barn doors, trans humps, spare tire carriers, etc etc etc. Once I get my 62 project
on the way and a plan for the 80 most of these parts will have to be sold to fund the projects.

Rear floor had a diamond plate floor that was poorly installed. The welded the rear nicely but only tacked in the sides and the front.
Looked like the original floor was in good shape, but either way could not leave 2 layers not knowing what was between them.
Pulled up the diamond plate, and found the original floor toast. Due to not sealing the sides of the diamond plate water could get
under it, and they used some sort of sealant in between the two. Likely a water based caulk since it was dried out and rusted
worst under the caulk then where it was not. 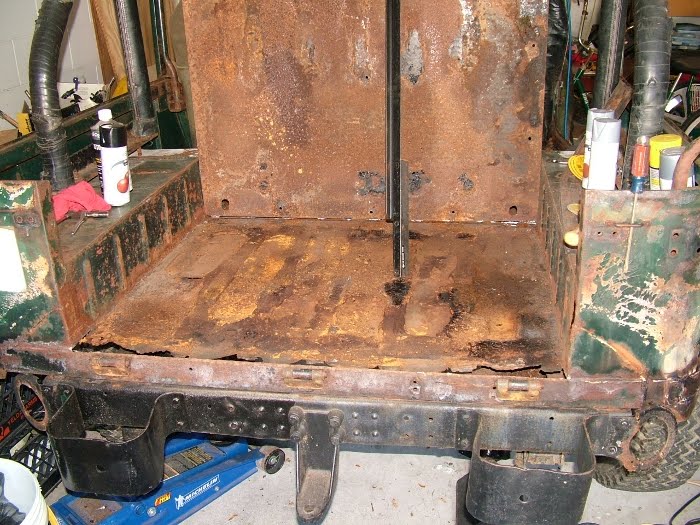 Decision was made to cut out the severely rusted floor pan and use the diamond plate as the floor pan. removed the floor and
channel supports, welded in some angle iron for support. I hate the channel supports that just end up being a place to collect
mud and rust. 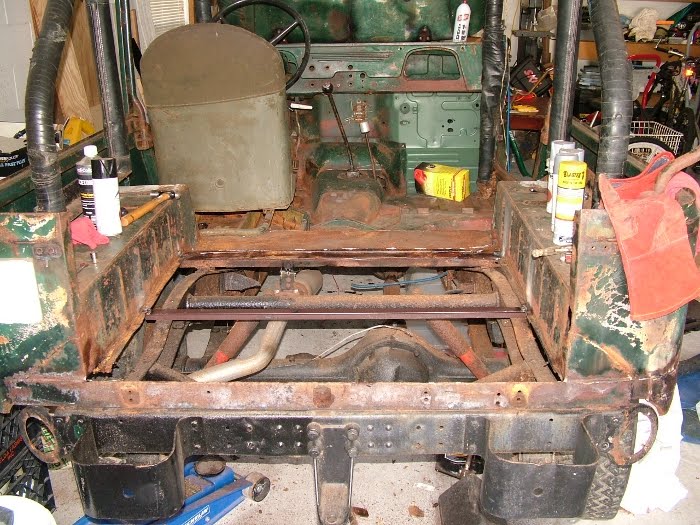 Got the diamond plate back in and welded down. 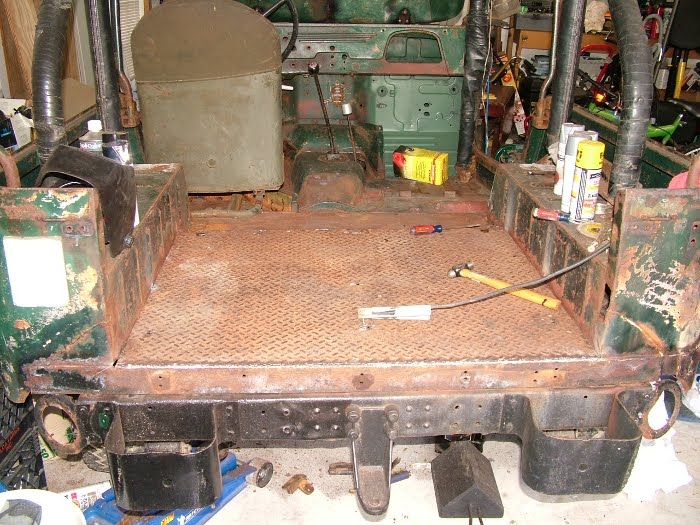 Several owners ago did some work on the rear, poor quality, but solid. Big solid angle iron was used for the rear sill. Main
problem is it is not centered. It sticks more off to the left. Very odd not to center it. Plan is to leave it and grind the left side
down to be flush with the body. Weld in a little more sheet metal to the right and make it look correct. Some areas will get
epoxy filler to level it all out then bondo skim coat to get a nice finish.

Next is to attack the center of the body 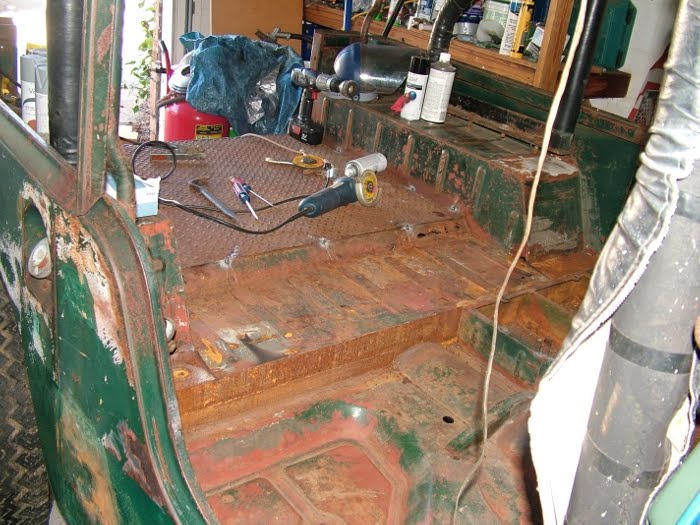 Once again a PO had put sheet metal over the center sections, I ripped it up and found the original floor in good shape.
just a few small areas on the flat parts that need to be cut and patched. All the beveling is solid so I will be able to
restore that and keep it looking factory. Under the gas tank and passenger floor are perfect. 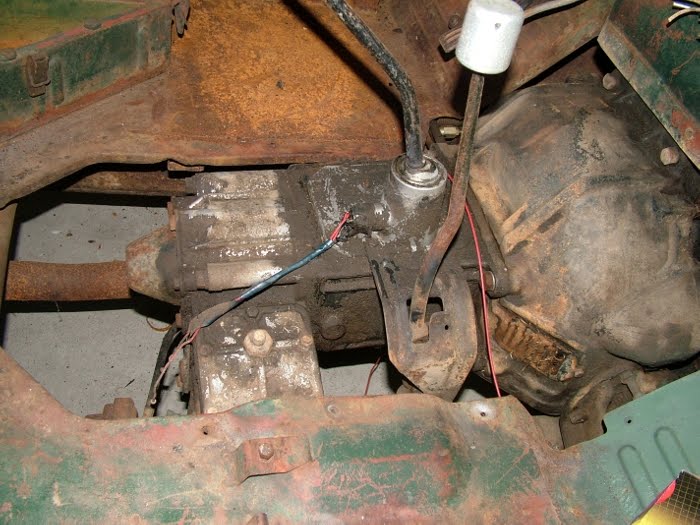 Congrats on the purchases!

Very cool that you found all the info in regards to the old 40 here on Mud. Even cooler that you got it running so easily!

Plus a soft top frame!

This will be fun to watch.

Now I am rolling. From other posts on here, similar to what I did to my jeep. I lifted the body off with the engine hoist. 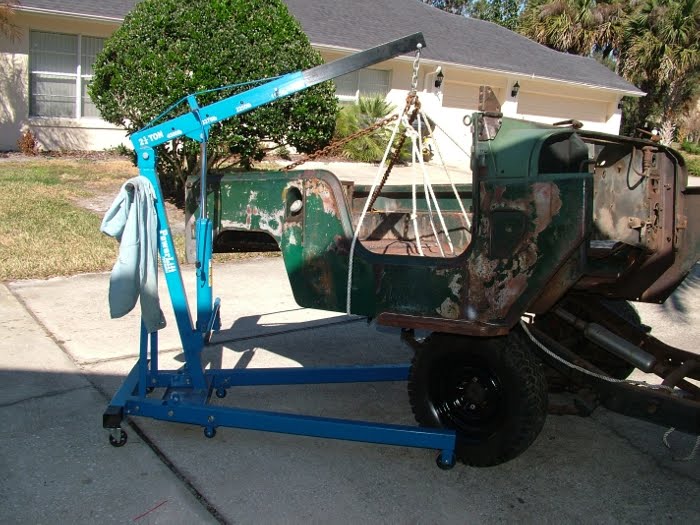 Came right off, hoist had no problems getting it up over the shifters and steering shaft. Power washed the chassis, frame looks ok, will need some welding in the very rear cross member. Other then that looks solid. Will have to clean out the inside of the boxes part and make sure that is solid and protected after I get the bottom of the tub done. 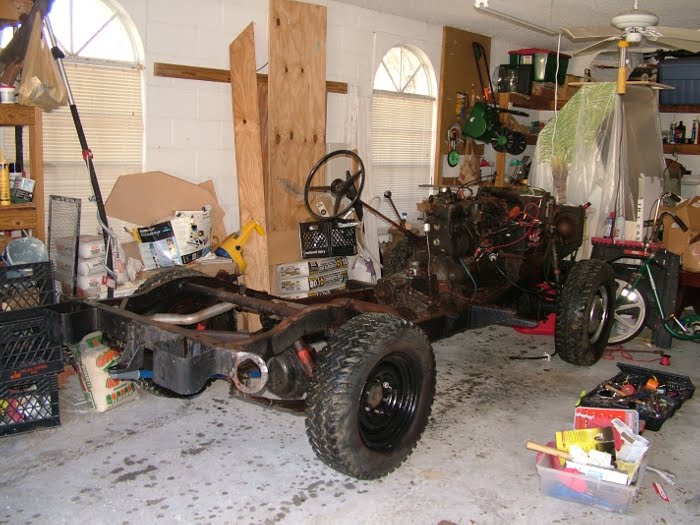 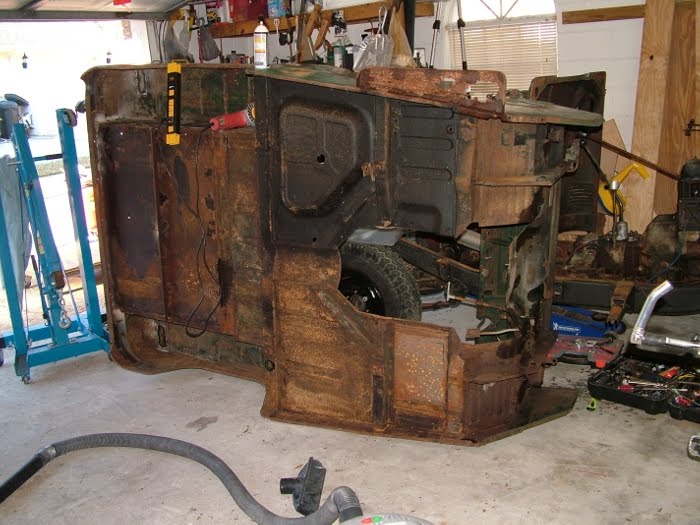 Jman said:
Crossposted from another thread, not that it makes a difference, it's all the same thread now...
Click to expand...

Fast Eddy said:
I didn't invent the laws of physics, I just enforce them.
Click to expand...

cjgoode said:
A little more welding, nothing worth a picture. Family getting in the way, son's wrestling meets every weekend etc. Keep hoping to get working on it but stuff keeps coming up. Hoping to get a lot done this weekend and post some pictures Monday
Click to expand...


No worries...it WILL take longer than expected, but it is a hobby after all, so enjoy the process when you do get to play with it!
Just don't forget that we love pictures
Self Admitted Purist
1964 FJ40 Hard Top...doing a true restoration!

My wife said no FJ! said:
No worries...it WILL take longer than expected, but it is a hobby after all,
Click to expand...


when your hobby is your DD taking longer then expected sucks

cjgoode said:
A little more welding, nothing worth a picture. Family getting in the way...
Click to expand...

ROFL - only funny cuz its true!

fairly clean, great start. I will be watching with interest.
74 FJ40 - in very slow project mode

Nice project, keep us posted with pics. I love the old school FJ's.
THE UNITED STATES OF AMERICA
IN GOD WE TRUST

Toyota Land Cruiser...It's the only way I roll.

“I am only one, but I am one. I can't do everything, but I can do something. The something I ought to do, I can do. And by the grace of God, I will.” Edward Everett Hale

"Live in harmony with one another. Do not be haughty. Never be wise in your own sight. Repay no one evil for evil. Live peaceably with all. Never avenge yourselves, but leave it to the wrath of God, for it is written, "Vengeance is mine, I will repay, says the Lord."--Romans 12:16-19
W

just found this thread via the fj25 mob. what happened next? you still chipping away or shelved for a while?

Shelved for a while since I had to do some house work and kids schedules, plus now the heat. I hope to get back on it in the next few weeks as my other house and landscaping projects are getting completed. Still enjoy looking at the pile of parts every day, and think about it, but we have had no rain and record heat and working/welding in the garage is not a real option right now.
Thanks Chris
-----------------------
1962 Fj40 Build thread
1980 FJ40 build on hold
1984 CJ8
M

After a long break of not being able to get into the garage, finally back on this project. Welding in a lot of new steel, and after almost 50 years of rust and PO making holes, it is about 1 day away from being back to only having factory holes, but does not look like factory, floors are not patches with replacement panels but just some poorly fabricated sheet metal by me and PO's. Will have pictures in a day or two.
Thanks Chris
-----------------------
1962 Fj40 Build thread
1980 FJ40 build on hold
1984 CJ8

I closed up the ends of all channel supports under the body to keep mud from getting in. Will 100% seal them up before I put the body back on. Also decided to pull out the PO's attempt to put in the rear corner support and put in my own. Made them out of 3/16 plate steel, They came out very solid. Need to finish welding in and some grinding to clean up my poor welding skills. 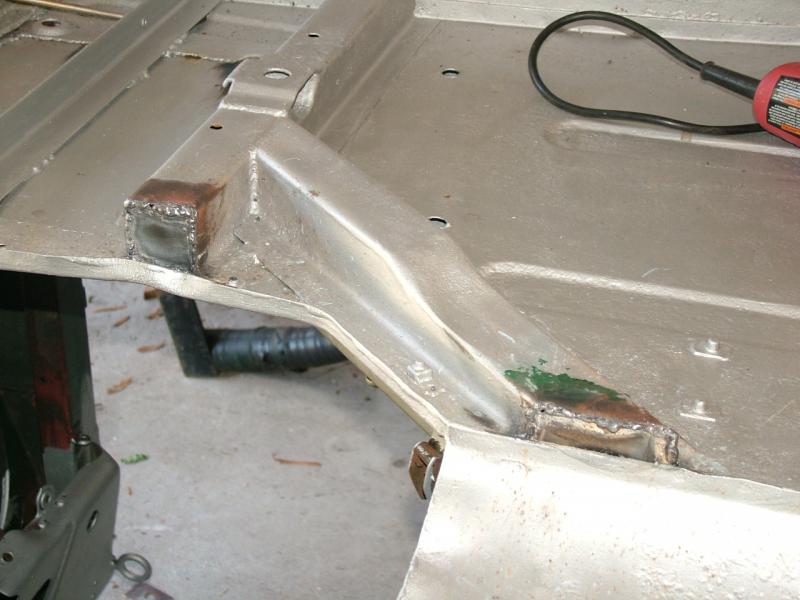 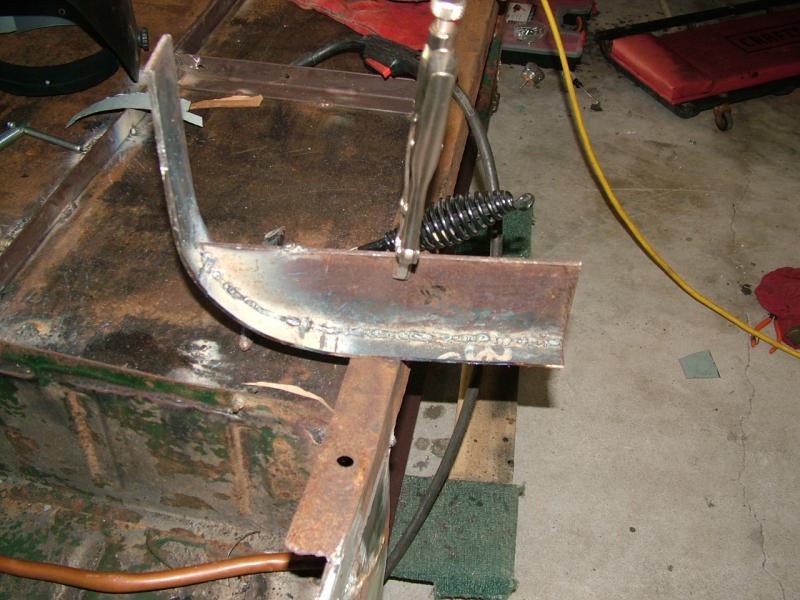 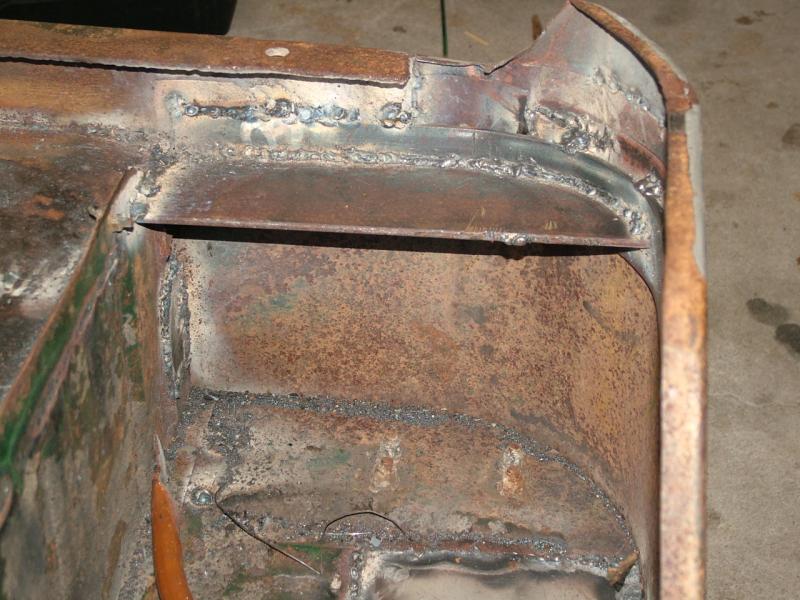 After welding lots of new metal, braces etc etc and many hours of grinding, wire brushing, sanding the bottom is finished. I plan to try and make the top side nice, but the bottom I was going for solid with no rust problems since this will go on the beach and sit out covered in sand and salt mist all the time.

The whole bottom has 2 coats or master series silver paint, like por15 but not as toxic, and does not have to be applied in sterile lab type conditions for it to work properly. Then coated with their black chassis urethane paint.

I sealed up all box supports so they are no longer open on the ends, any and every crevis was filled. Big ones filled with epoxy, Elmer's all purpose repair system is a 2 part epoxy and bonds to everything and works great, small ones were filled with bondo. I made sure there was no place for any sand and salt to hide. Once mounted I will also seal the holes where the body mounts go.

If you wanted factory looking bottom do not look at the following pictures, to much rust damage and to little budget to restore the bottom to that type of conditions, but this will be a solid rig that is for sure. 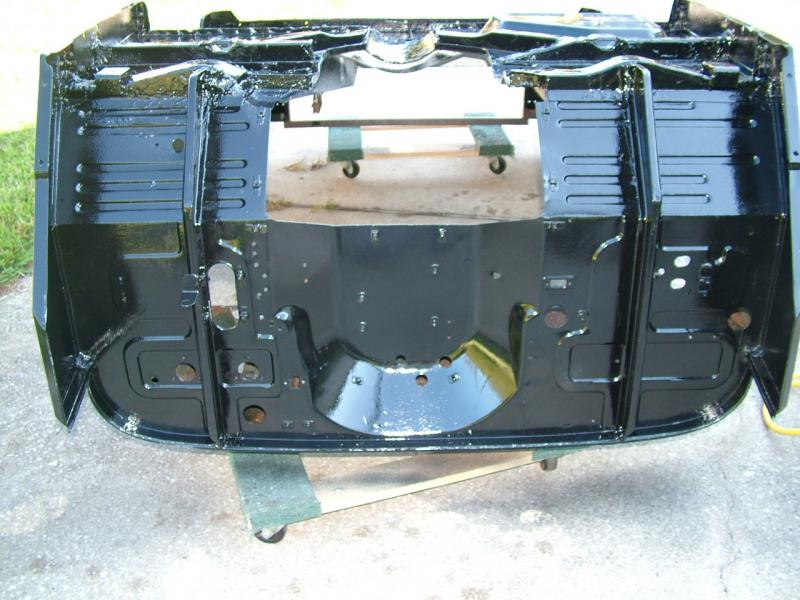 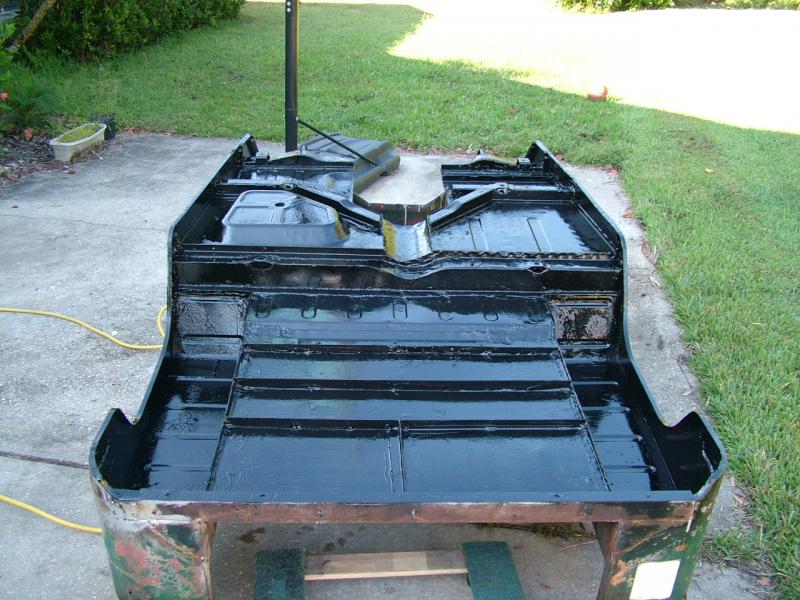 Before you get further along, are you going to be using a Vacuum booster on your brakes? If so, you might want to modify the upright to match the newer ones. Many have just used a spacer to avoid doing this modification.
Builds - My 40 Build... 20 years and Counting... Purists beware, this may hurt
Installing an 81 hardtop onto my 74 (keeping the hatch)
Gas charged Hood & Hatch strut retrofit
Never underestimate the importance of a ground
FF rear axle, 4 discs, AIRide rear bags, ‘72 SBC, On-board air, Split hood, Gas hood/hatch struts... Restomod.