I have searched and searched, ordered a factory service manual (which will not come for 3 more weeks). Due to circumstances I had to change my distributor to a newer model (84 fj60). I hooked up the throttle vacuume to my carb. and when started it ran at 1,600 rpm or higher. I tried to mess with some of the screws, I know stupid without asking, and messed it up. I can run it but don't know if I am where I should be in the whole realm of a good tuned carb or not. I need to have someone either give me a process, where to start from 1.2.3. etc. or have someone copy their FSM so I can see what I am suppose to do. What kind of carb is this (some people say asian or non asian - foreign and USA respectively?). I know what the screws are now and what some of them do. I just don't know where to start to tune a carb for now. Are the pictures I sent good enough. The picture from the top down, is that normal for one side to be black. Just a little education since my last FJ had a 327 in it. I know newby but if you could lend some patience and great advice then it would be much appreciated. I made the title so that further cruizer heads can search this link and leave most of you alone. 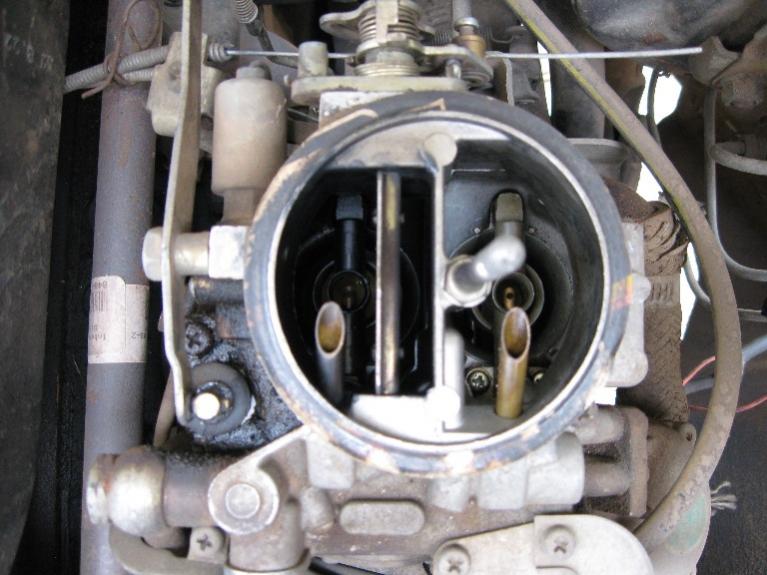 Help me if I am wrong with these screws, and what settings they should be. 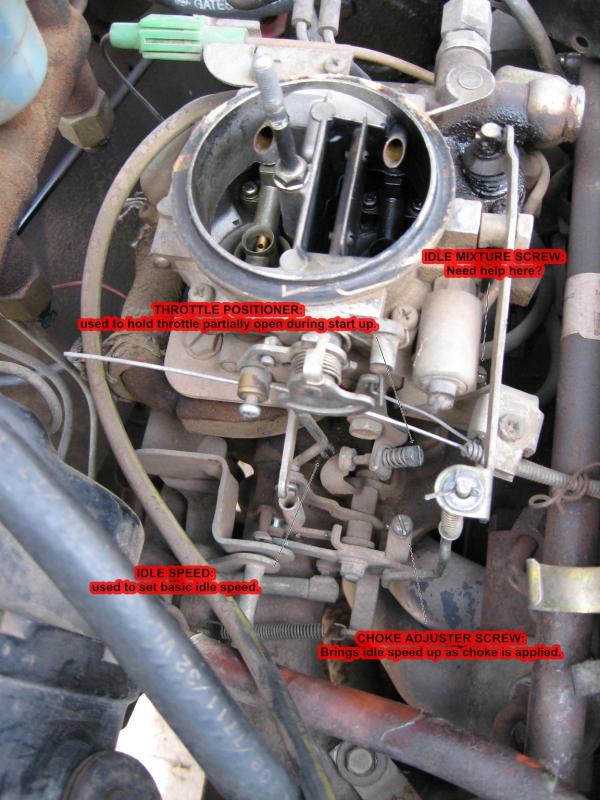 I am bumping this back up for you. I have a 77 also that I am very frustrated with

I have the 2F engine FSM but I can't really make heads or tails out of the instructions.

It appears to be a US Aisan that is missing a few parts and has some strange things like a paper clip wire holding the throttle positioner arm. You can get rid of the TP speed screw, since the TP is non-functional. For adjustment, warm up engine, open idle mixture screw 3 turns and set RPM to 650 using idle speed screw. Turn in idle mix screw (CW) until RPM just begins to drop and your are done.

The choke speed screw is set when the choke is applied to get about 1500 RPM. Too bad that your vacuum choke breaker/throttle positioner is missing as the choke will be a little touchy. I guess someone thought it was smog related and threw it away.

Dude, I am in pretty much the same boat with a very similar looking carb that is apparently in need of some attention. I've got it running fairly well with the choke pulled halfway, but as soon as it's push all the way in, it sputters and dies. Keep the good advice coming!

Thanks for the needed help pin head, here is the picture I was talking about in the pm. What is the difference from aisan and non aisan? Should I try to find a "vacuum choke breaker/throttle positioner"? What does recurving the dissy do, does it make a world of diffrence (I will search more on this).

This wire is gone for others that visit this. 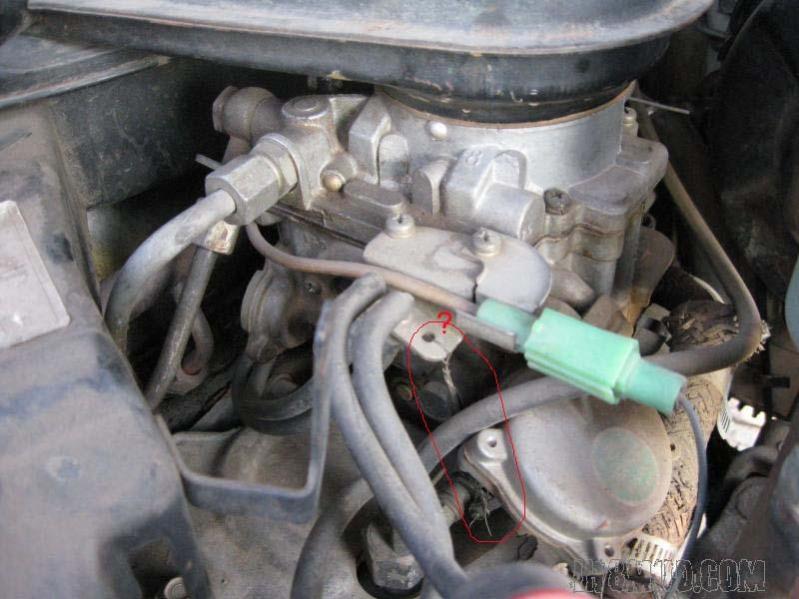 I don't know WTH that wire is doing there, but it can't be good. It looks like it restricts the opening and closing of the secondary.

The choke breaker isn't necessary, but it will make it run better immediately after starting when the choke is on. "Recurving" changes the amount of mechanical advance at a given RPM. Generally, recurving gives more total advance. You can also increase the advance statically and end up with the same total advance at high RPM. None of this makes much difference in performance or fuel economy, unless you pay a lot of money for it. Once you pay a lot of money for it, then you will be convinced it made a world of difference even though it won't show on the dyno or at the pump.

You can see how your carb should look by checking out the pictures at SOR.com

Not that I am the expert...as I definitely am not...but the guys over at SOR told me that the Asian Carb for the 2F allows for a vacuum advance distributor. The US carb does not (for emissions purposes). I guess you get a bit more power with the vacuum advance.

CarolinaMan said:
Dude, I am in pretty much the same boat with a very similar looking carb that is apparently in need of some attention. I've got it running fairly well with the choke pulled halfway, but as soon as it's push all the way in, it sputters and dies. Keep the good advice coming!
Click to expand...

I have the same problem. Did you ever figure anything out?

Wyoming101 said:
I have the same problem. Did you ever figure anything out?
Click to expand...

Check your idle solenoid - a search here on MUD will turn up a lot of threads.

I have the same problem as the second problem poster here. I have replaces my whole fuel system as I thought it was the problem but I still have the occasional stalls from startup after I push in the choke. I have adjusted the carb (I thought) but have been told there is more than adjusting the idle speed. also now its dieseling? where it is sputtering and turning when turned off after a drive.

I’d verify that startup and idle fuel is being delivered from the idle circuit. If you disconnect power to idle solenoid it should plug the idle fuel passage and engine should die.
J

thebigredrocker said:
I’d verify that startup and idle fuel is being delivered from the idle circuit. If you disconnect power to idle solenoid it should plug the idle fuel passage and engine should die.
Click to expand...

Reviving this as I have a followup question for you BRR if you please...I am finishing up a complete rewire on an 1974 FJ40 with what appears a USA Aisin carb, which would be expected given what I know of this truck. It has a 1-wire solnoid on it...does that solnoid need 12v when the truck is running, or under only certain circumstances? Thanks!

Solenoid is hot when the key is on IGN.
J

Pin_Head said:
Solenoid is hot when the key is on IGN.
Click to expand...

Thanks You
You must log in or register to reply here.

have you ever felt left out because you don't have the same ability to wash and wipe your front wind shield as the 77 and newer Folks ? NOT ANY MORE !

Wiper linkage part for my ‘77