I have a 77 FJ40 with 2F and having an issue with fan clearance. I've tried loosening the motor mounts and sliding everything back, but no luck, the motor is as far back as it will go. Same with the radiator support, it's as far forward as it will go. There's a place on the radiator where the fan has gotten into it. This happened before I got it. It's been apart for quite a few years and I'm just now putting it back together, but I never noticed it before I pulled it all apart. I'm going to post a few pics. Would any of you mind taking a look and see if you see anything obvious? I reused the fan and fan clutch. The water pump is new, but the pulleys line up, so I suspect it's OK. I'd appreciate any thoughts. Thank you! 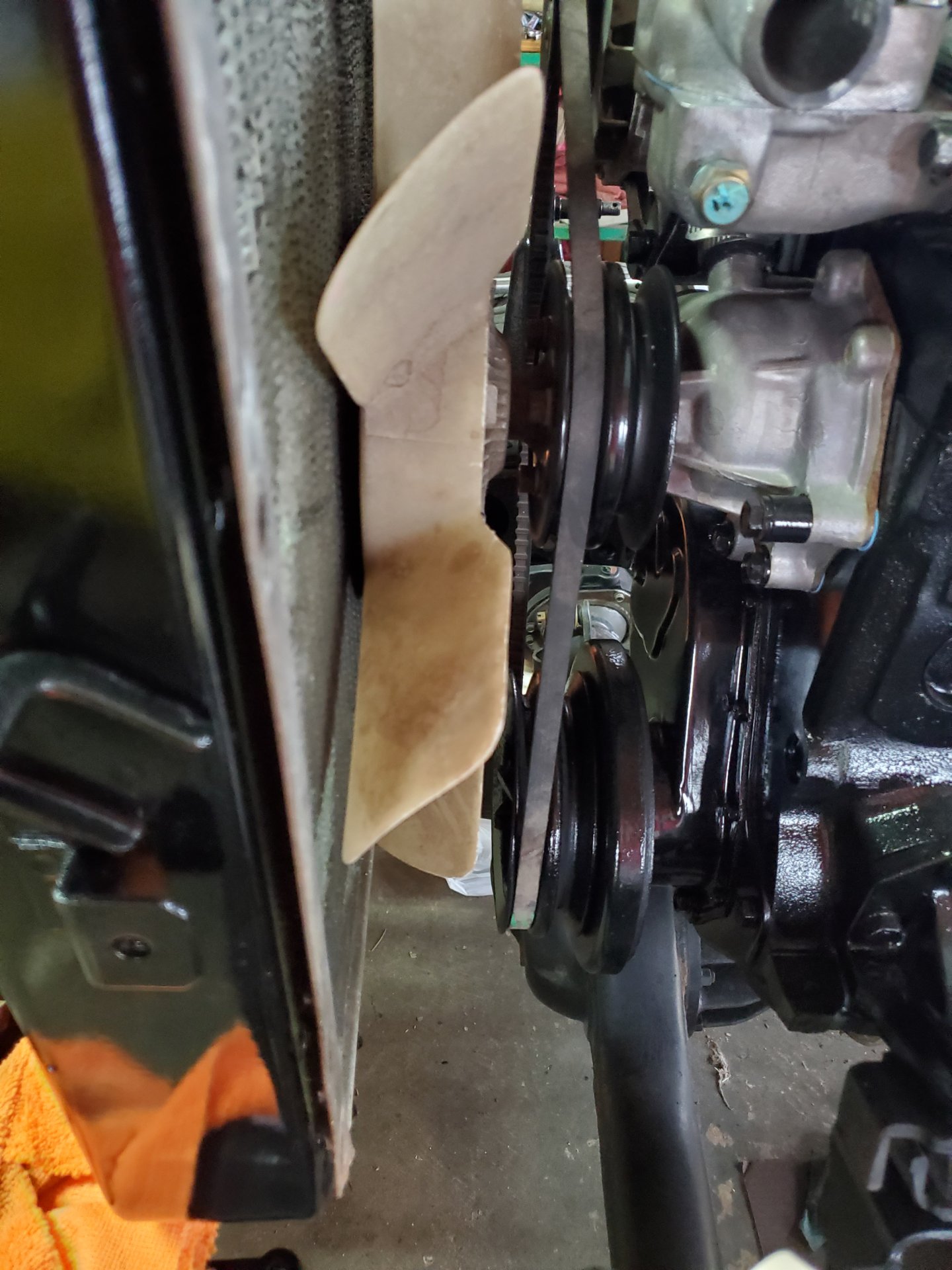 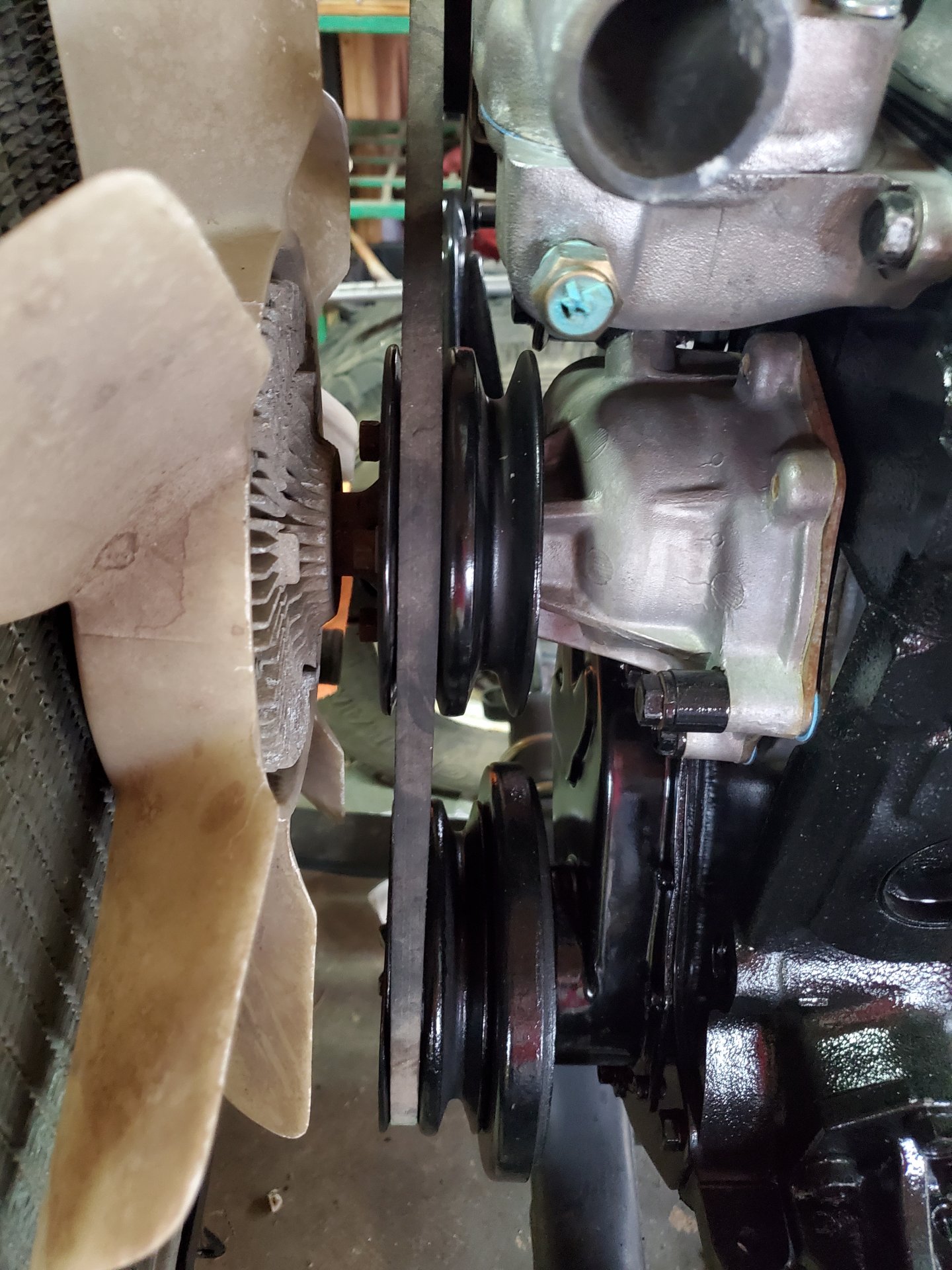 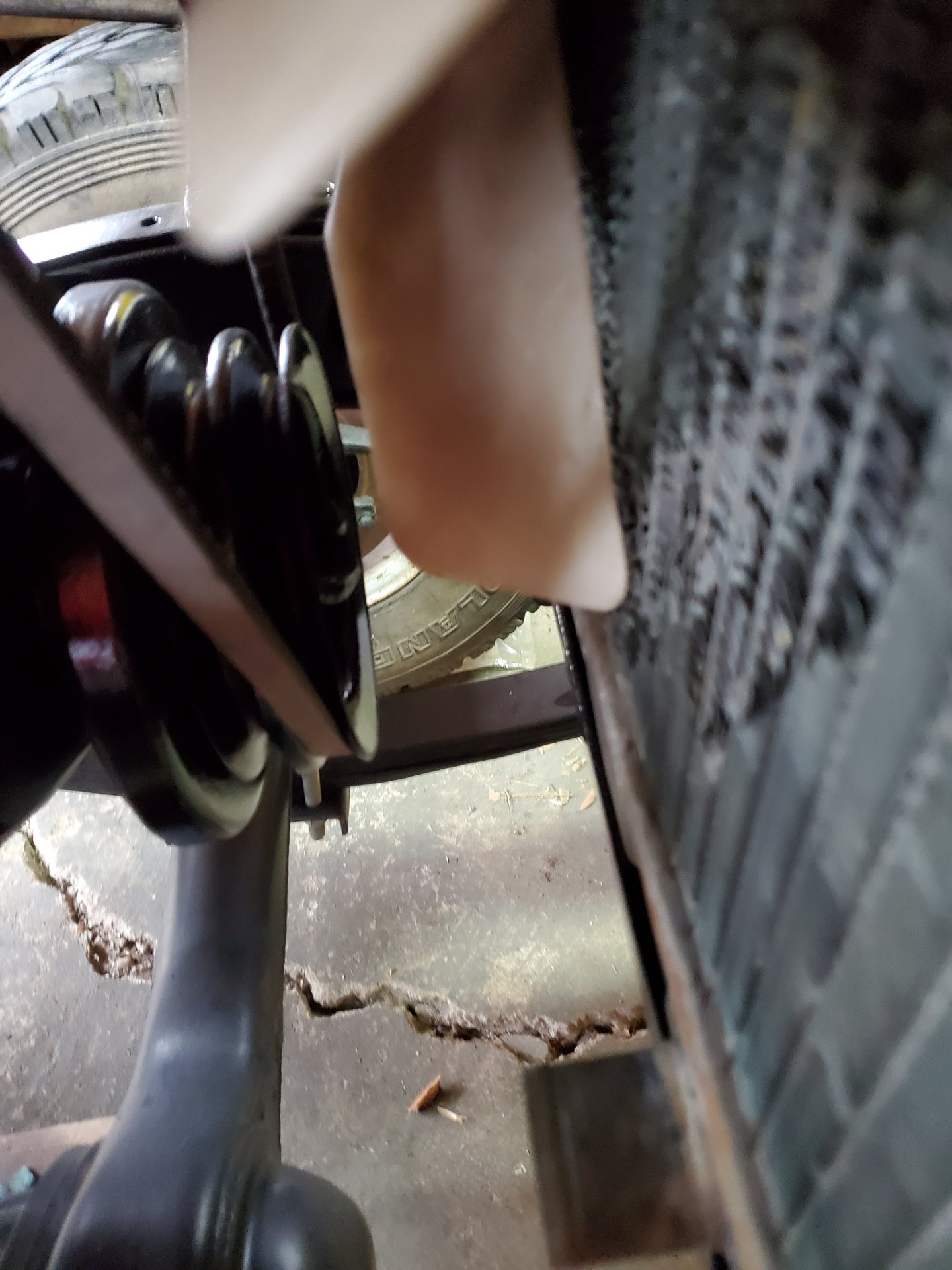 I apologize, those picture didn't tell the story like I thought they would. It's a actually hitting on the right hand side, close to the bottom.

Edit: I don't see the SOR size chart anymore (old age, perhaps), but this is an old thread where I posted the part.

Length of water pump AND clutch?

Hey all, I've found plenty of results for the different heights of water pumps for the 2F. What I'm interested in is the overall height from the base to the end of the fan clutch - I think a decade ago I ordered or received the wrong (too long) pump and clutch, which lead to the clearance... 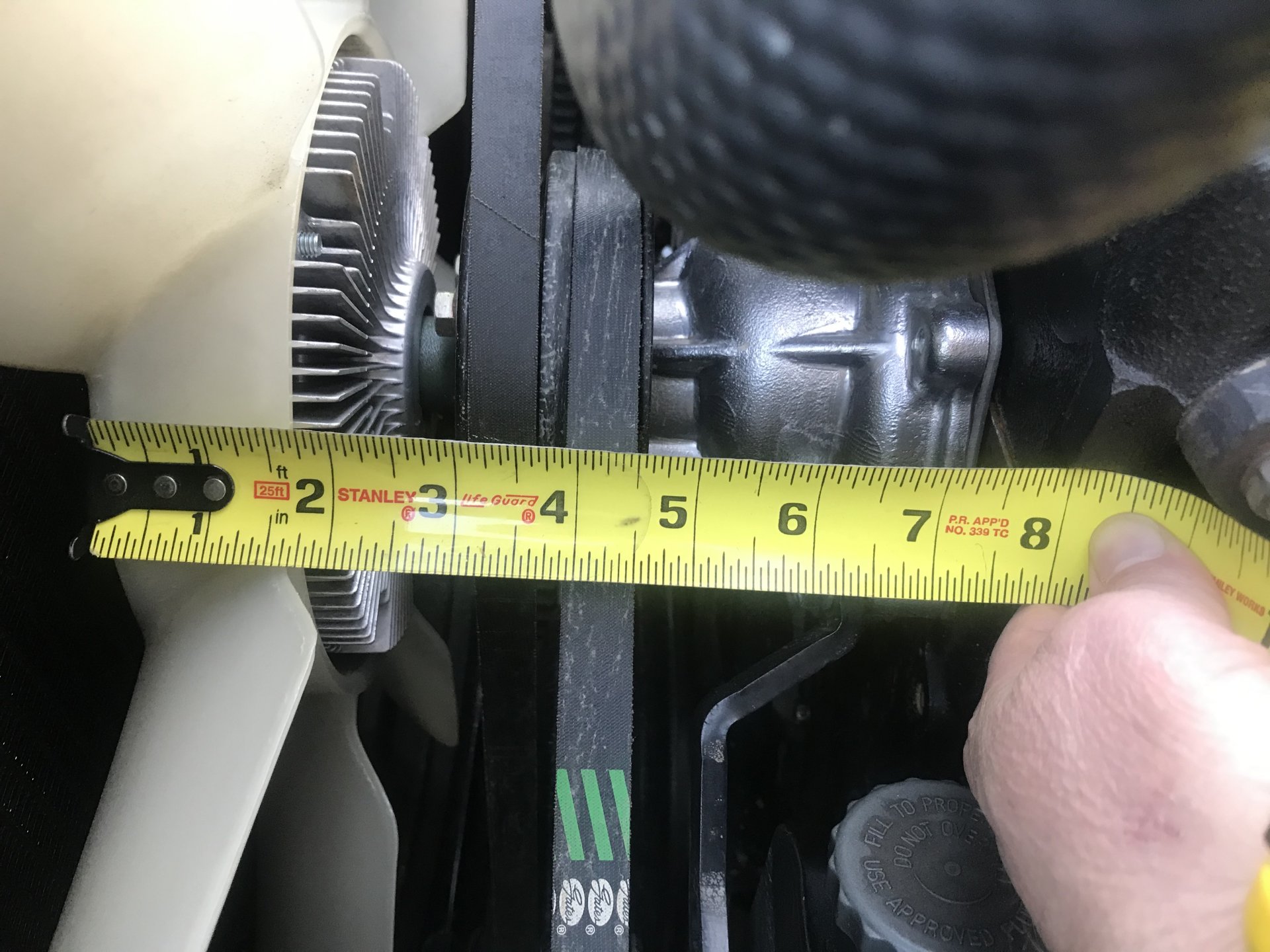 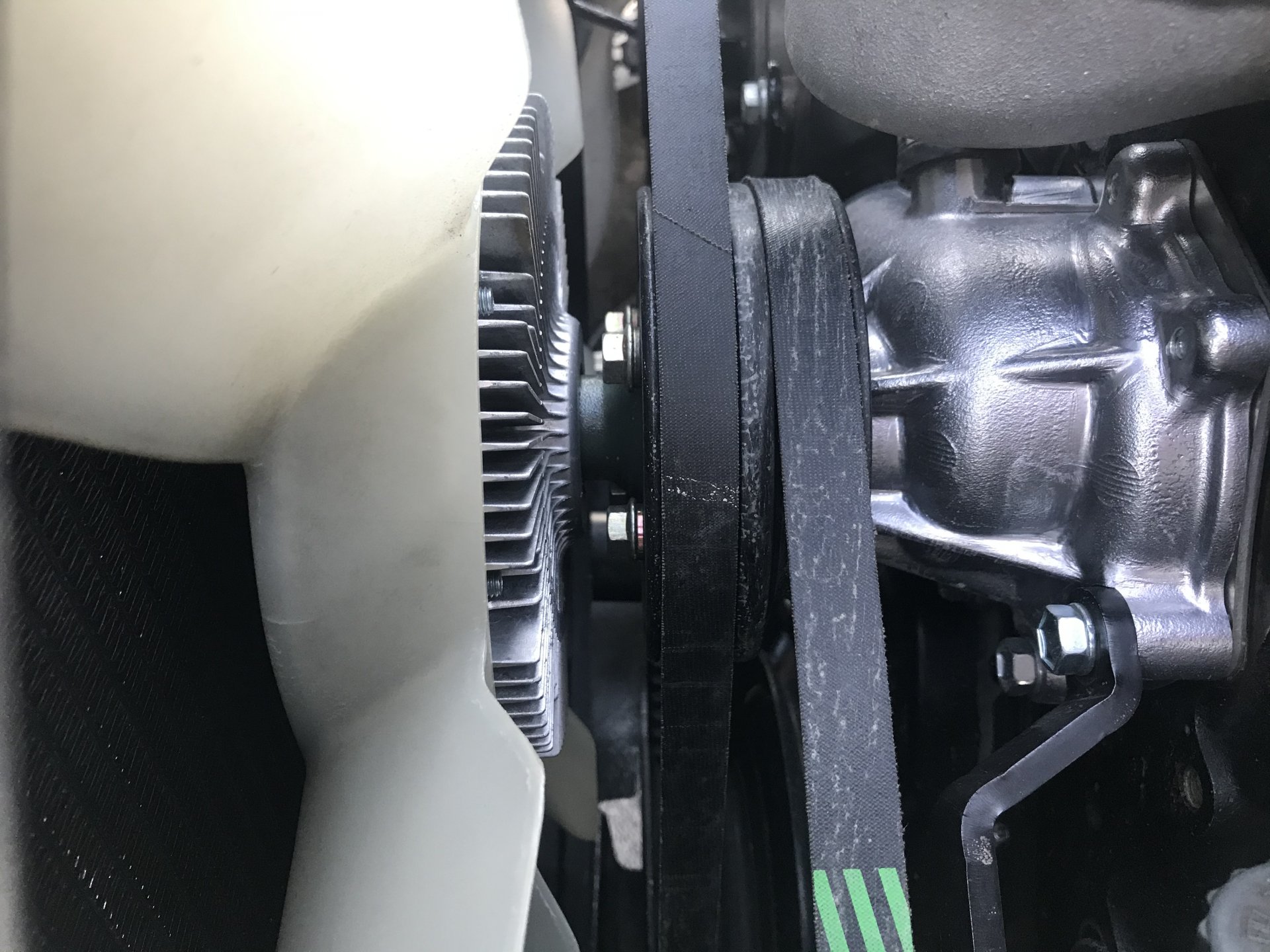 Thanks everyone. Spotcruiser that is excellent info, thank you very much. Not sure how I missed that in the search. I measured from the face of mine to the block and got about the same as you GA, It was just a tad shy of 8 inches. Does anyone know about how much space I should have between the fan and radiator?

Call Cruiser Outfitters. Get a red base fan clutch and a Tacoma fan. 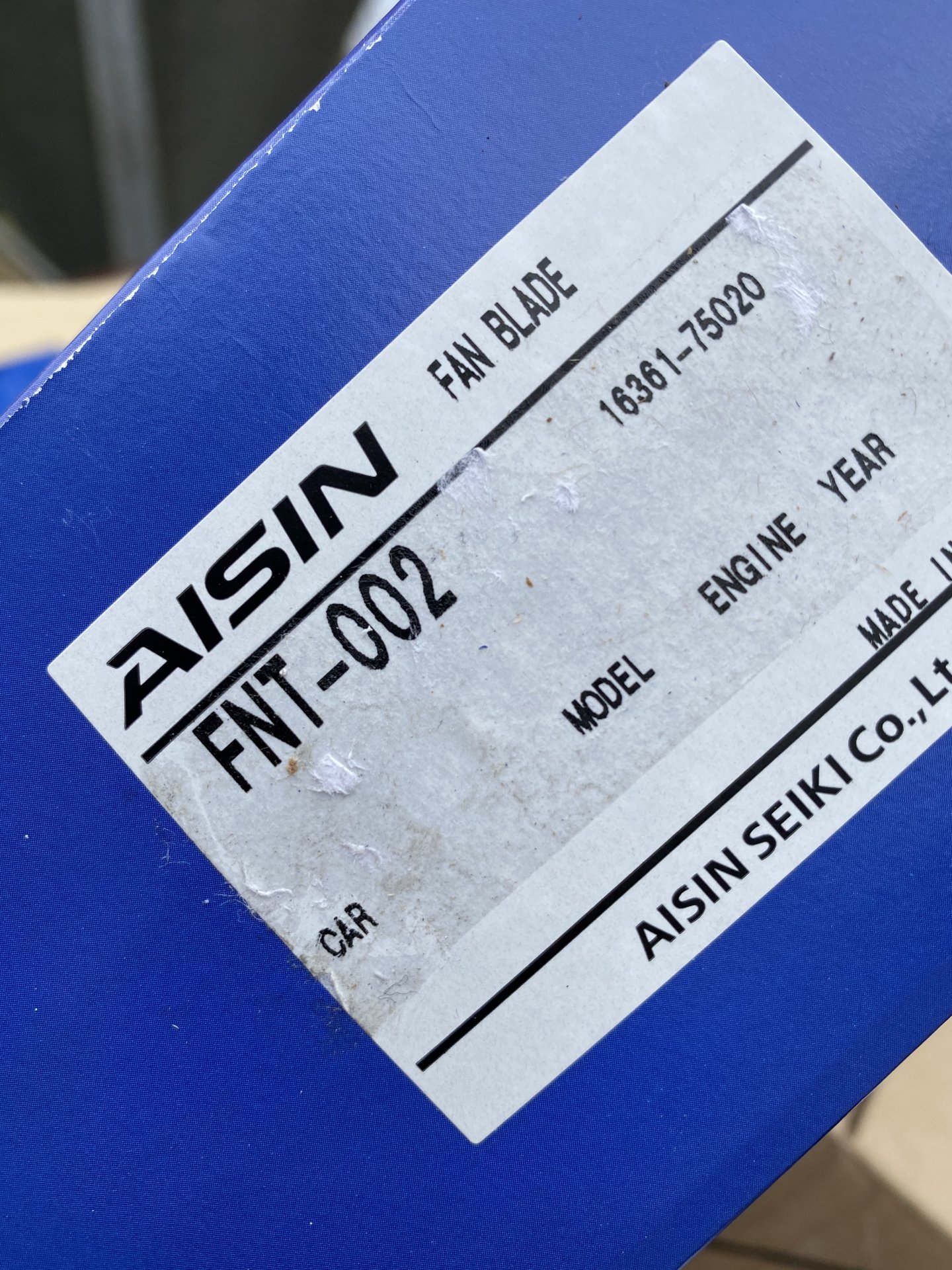 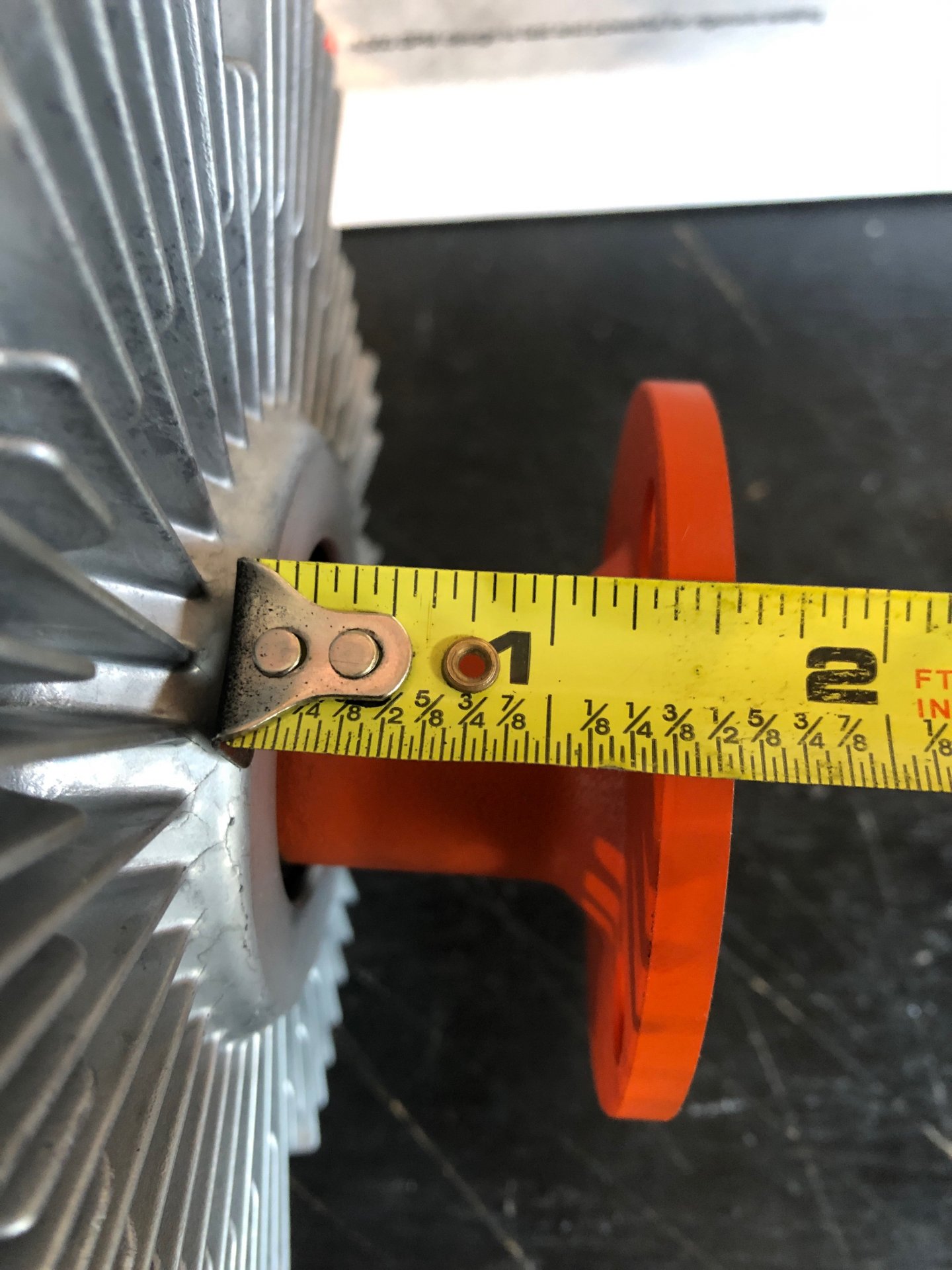 wngrog, you don't happen to know the length from the front of the fan to where it mates up to the pump do you?

thewatergoblin said:
wngrog, you don't happen to know the length from the front of the fan to where it mates up to the pump do you?
Click to expand...


I think it’s in here. If not I’ll look tomorrow
N

There was a major change in '77~ front crossmembers to allow the use of fan clutches. It's possible that you have the old style front X-member. If you do you may need to grind the rear top edge of the X-member back a little and drill new mounting holes in the core support brackets for the radiator support. That will give you enough room for a clutch. All though this likely isn't your issue I thought i should pass it along.
T

numby, that's very interesting because I think my frame is a 74. I had some fenders from a 78 that I was going to use a few years ago and the bolt holes in the frame for the fenders were different. So after talking to the PO he thought it had been replaced due to a wreck many years ago. Guess, that's probably something I should have mentioned, but I had completely forgot about it.
N

thewatergoblin said:
numby, that's very interesting because I think my frame is a 74. I had some fenders from a 78 that I was going to use a few years ago and the bolt holes in the frame for the fenders were different. So after talking to the PO he thought it had been replaced due to a wreck many years ago. Guess, that's probably something I should have mentioned, but I had completely forgot about it.
Click to expand...


Okay, here’s how to tell if you need to do the alterations I mentioned....

IIRC the pre-8/76 front crossmember is made up of two pieces of U channel. The top, front, and bottom are one piece and the back - the side facing toward the engine compartment - is a separate shallow U. The back piece fits inside the front and the two are hot nailed/riveted together along the rear edges both top and bottom. Kinda like this but on its side:

Also riveted to the back piece are the two radiator support brackets. There is a single hole in each of those for the core support frame to bolt to.

The 77~ crossmembers are also made of two U-shaped channels BUT, at least at the top rear edge, Toyota drastically trimmed back the overlapping portions which eliminated the rivets. There’s just not enough overlapping material so instead they welded the two pieces together across that entire seam. This cleared (more than) enough space to move the radiator forward and mount a clutch fan (likely just for fuel economy). The small brackets riveted to the rear of the crossmember also changed. They got much shorter and the holes are drilled much closer to the crossmember to mount the core support as far forward as possible.

I don’t know much about Cruisers that are much older or younger than my current ’78 so I can’t be certain what you’re facing with a ’74 frame. SOR used to list frame component breakdowns but not so much these days. They do show a 9/71-1/75 core support change and another from 1/75-8/76. This may simply reflect the F to 2F engine change with the post 8/76 change reflecting the addition of the fan clutch. Going on memory here I believe that the welded seam line that Toyota used on the 77 and later crossmembers falls directly through the center of the earlier rivet line. A few options:

1. Cut back the top rear edge of a riveted crossmember to the 77~ dimensions, weld it up, and then re-drill the small core support brackets to move the radiator forward like stock for your year or...

2. Grind back that rear edge of a riveted crossmember as far as needed and the re-drill the core support brackets to get the core support moved forward enough to clear your fan/clutch. I think it’s pretty easy to get another 1” - 1.5” this way. The one I did never had any problems. I think I was able to use stock core support rods or maybe we had to use the 9/71-8/76 ones. Can’t remember.

Before you do that just but they two parts I told you about.
N

Playing around with some options, I can get us to 7-3/4" overall height (without the pulley). Even with the thickness of the pulley flange (1/8") we are still well shy of the 8" mark which would give you an inch on the fan to radiator. That is using FJ4x parts with an FJ60 fan blade. I've got...

Thanks to both of you for the info. I have the earlier crossmember you described. I never knew there was a difference As usual, all of you are a wealth of information and I appreciate the help. wngrog, I think your option is definitely the easiest! I'll be getting those ordered this week. numby, awesome post!!!!
You must log in or register to reply here.