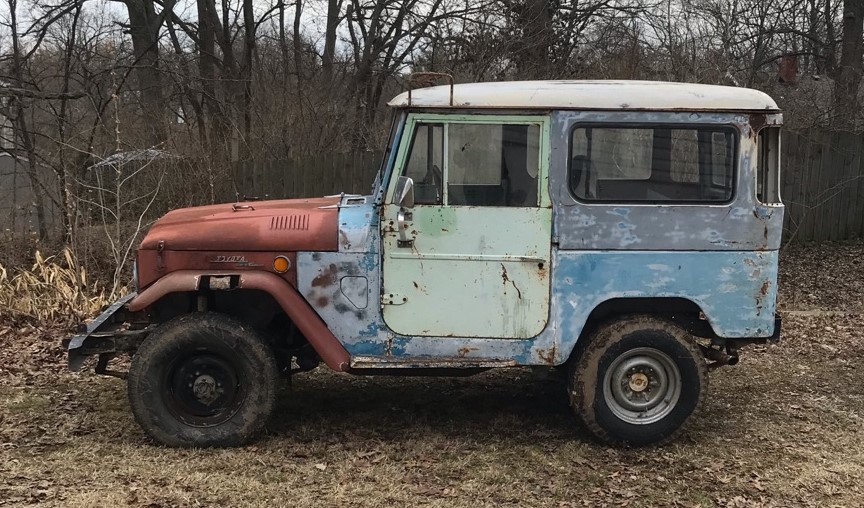 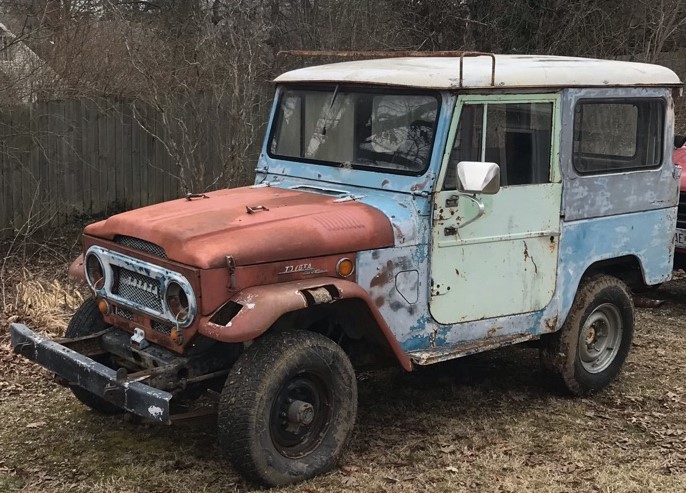 Those paint colors almost make you want to grab the satin clear coat and go right over it. I guess you could patch the holes, first. Nice looking truck! Lots of potential!
The light shines in the darkness, and the darkness has not overcome it. John 1:5

"I guess it comes down to a simple choice, really. Get busy living or get busy dying."---Andy Dufresne

Nice FJ40. Perhaps you could share frame number. I have been searching for a close assembly line friend with my 1969 ?

1969FJ said:
Nice FJ40. Perhaps you could share frame number. I have been searching for a close assembly line friend with my 1969 ?
Click to expand...

1969FJ said:
Nice FJ40. Perhaps you could share frame number. I have been searching for a close assembly line friend with my 1969 ?
Click to expand... 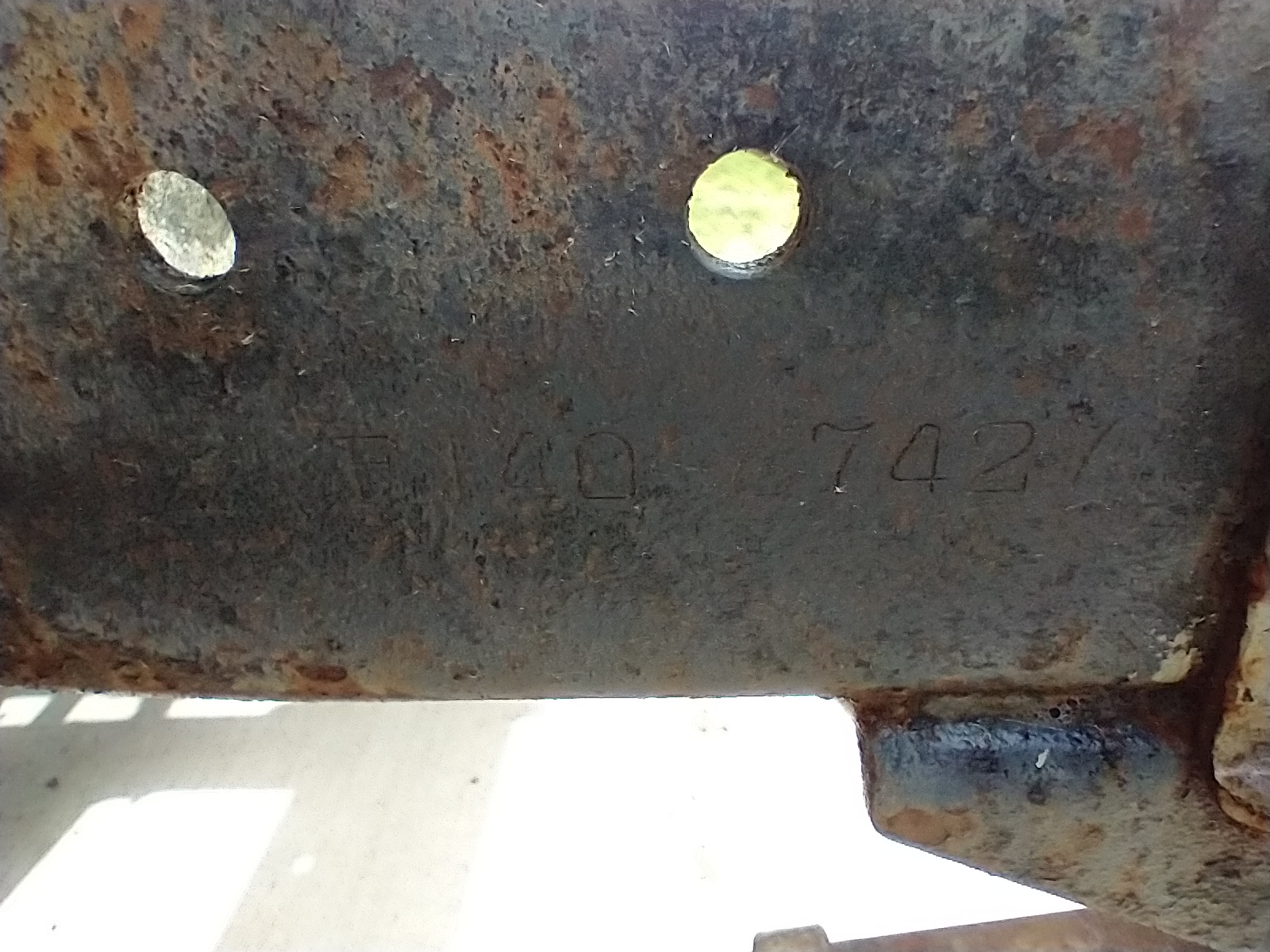 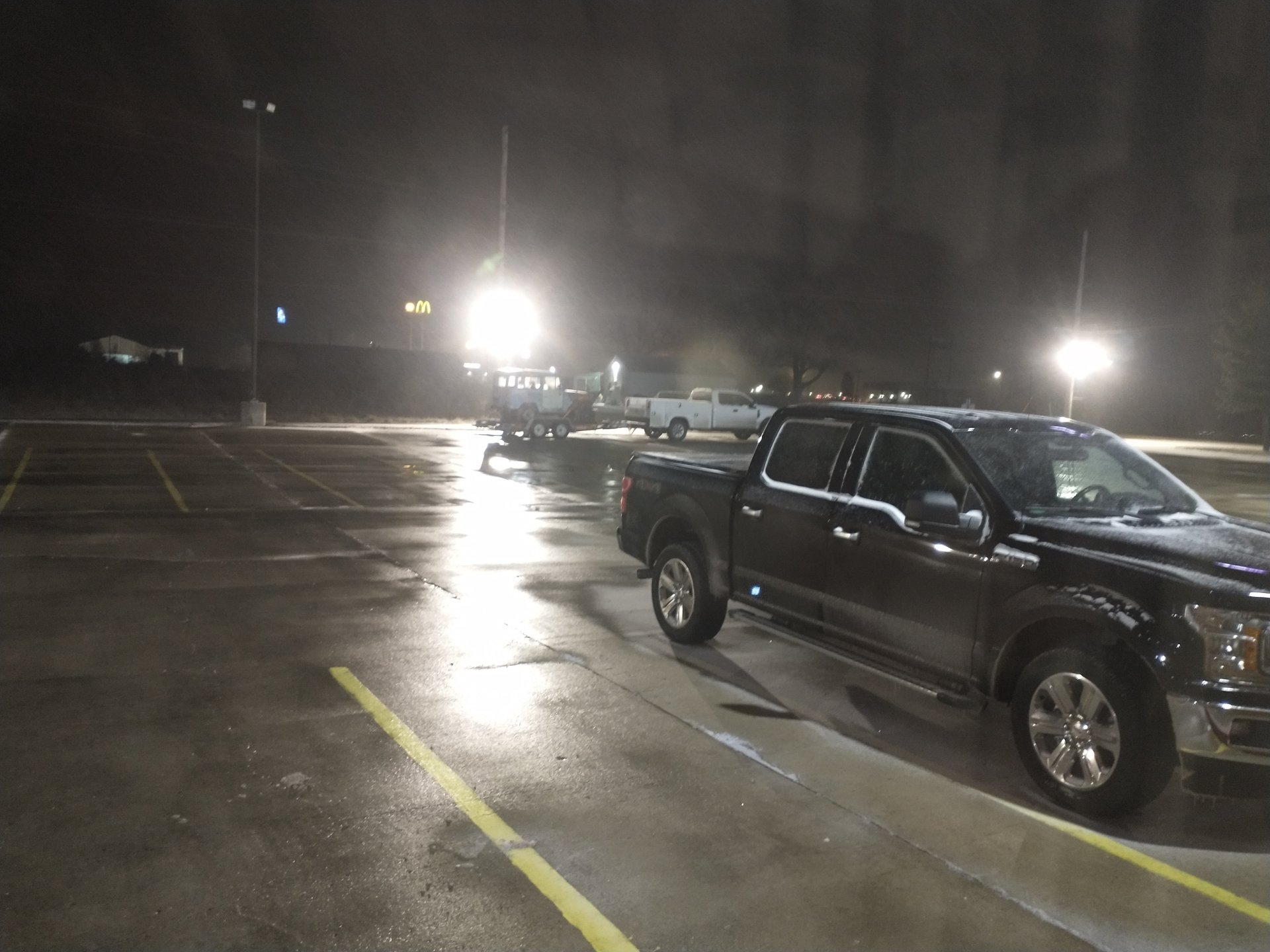 Picked up Mavis in the dark of night after a six hour drive in the middle of a Missouri March snowstorm. Kudos to @61twpw for not just slamming the door on my face and telling me to sit and spin on that miserable night. Instead he really put himself out to make sure the truck was safely loaded and I got on my way. He even threw in some bonus freebies. 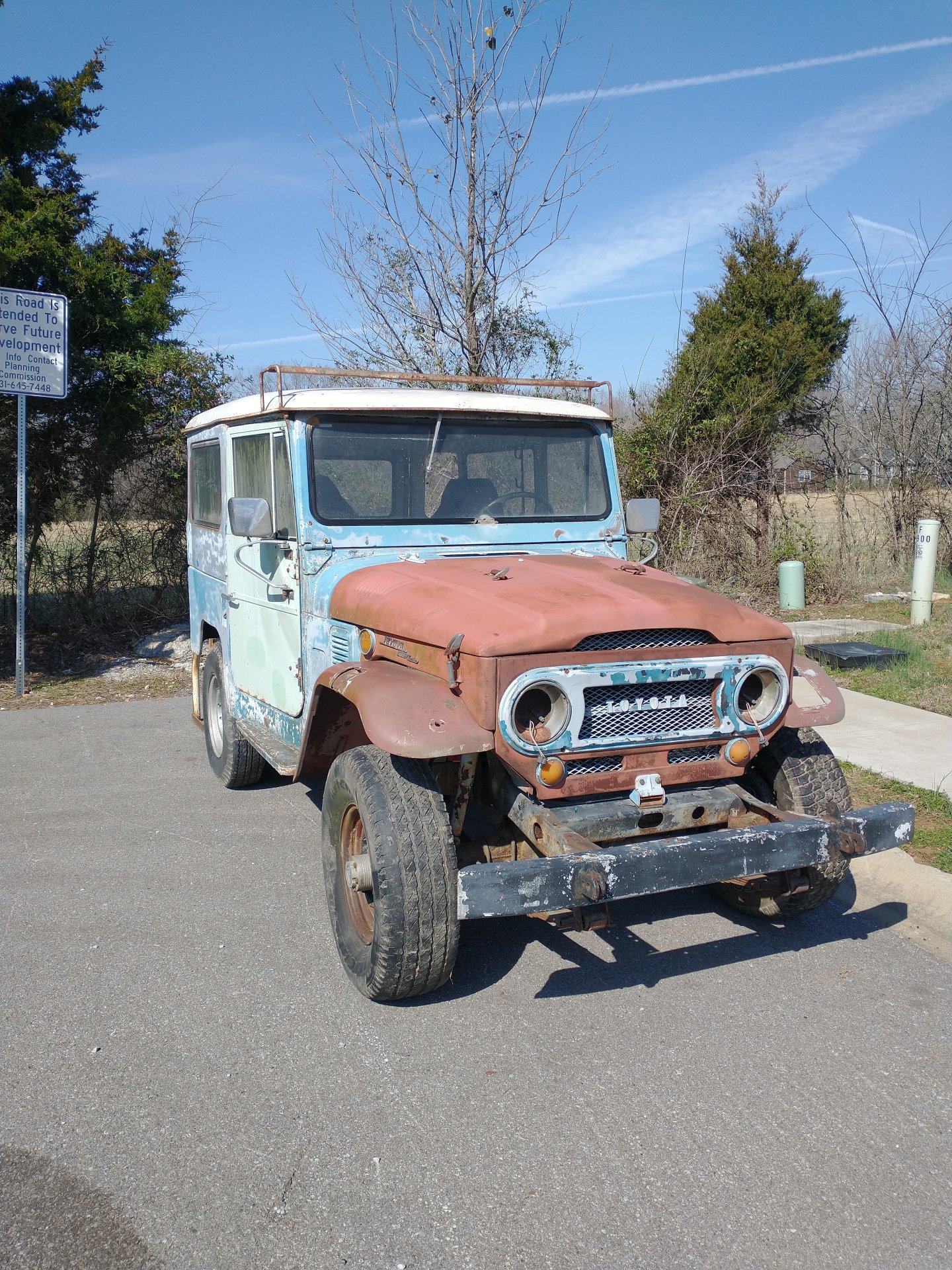 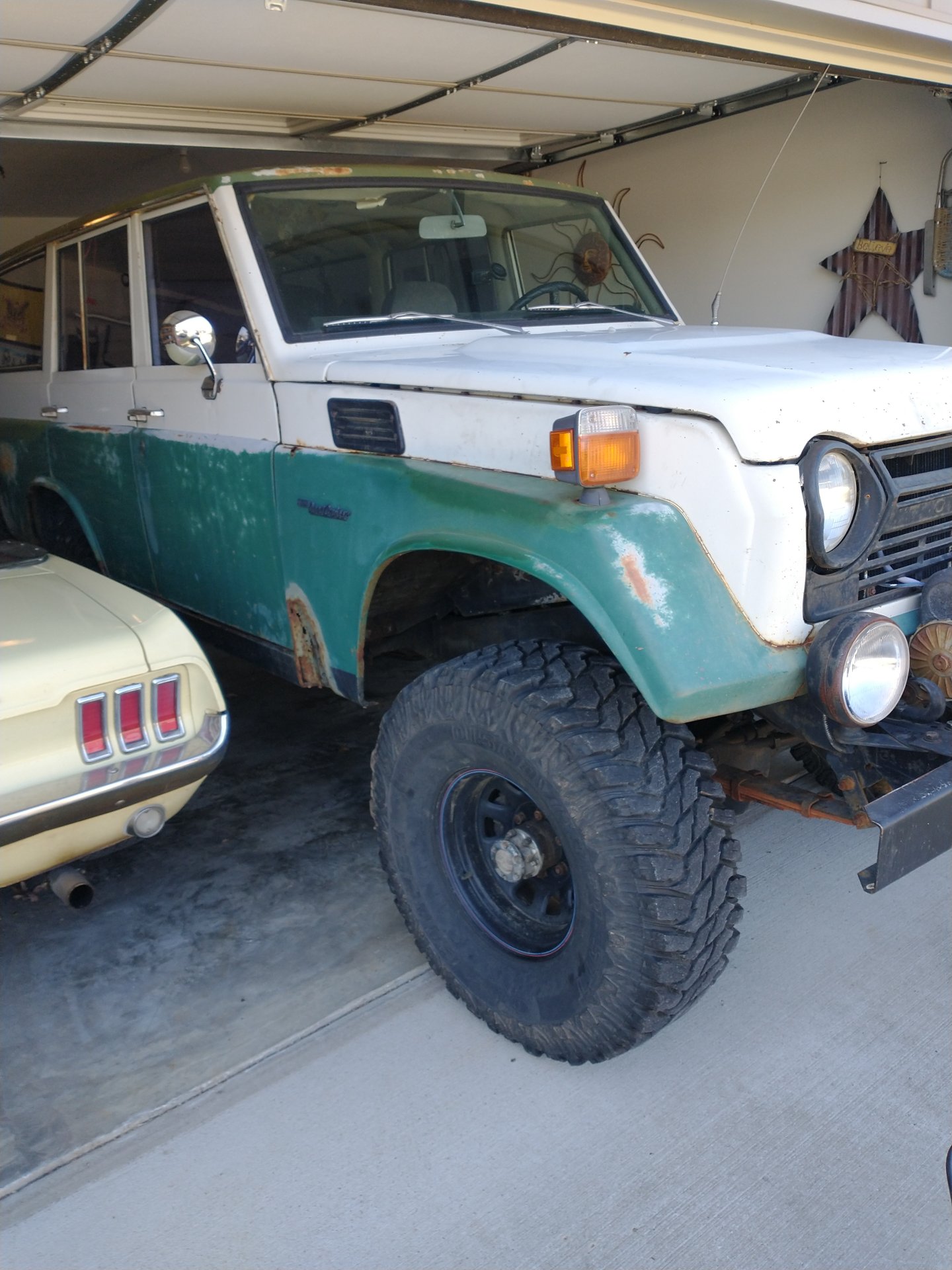 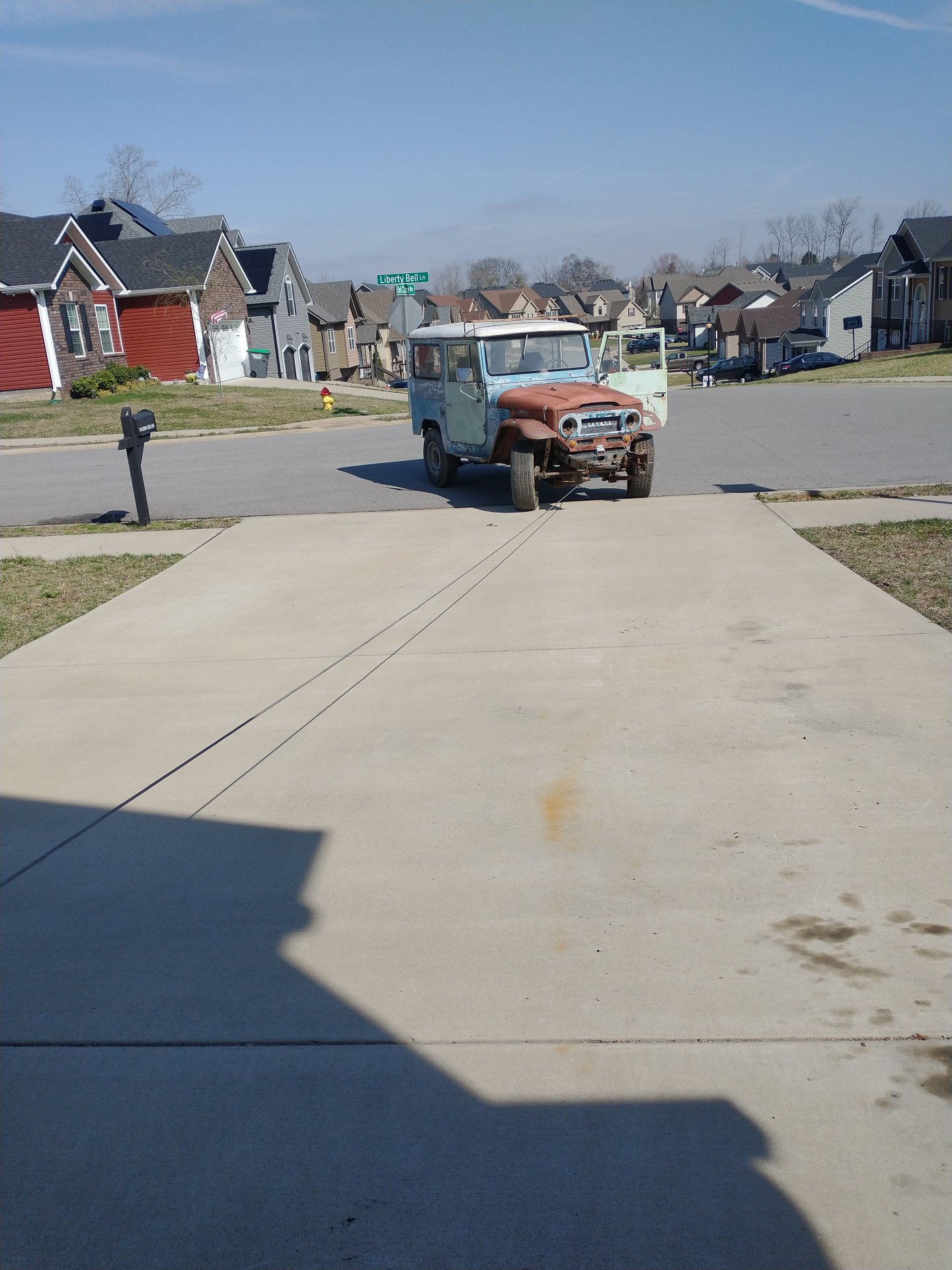 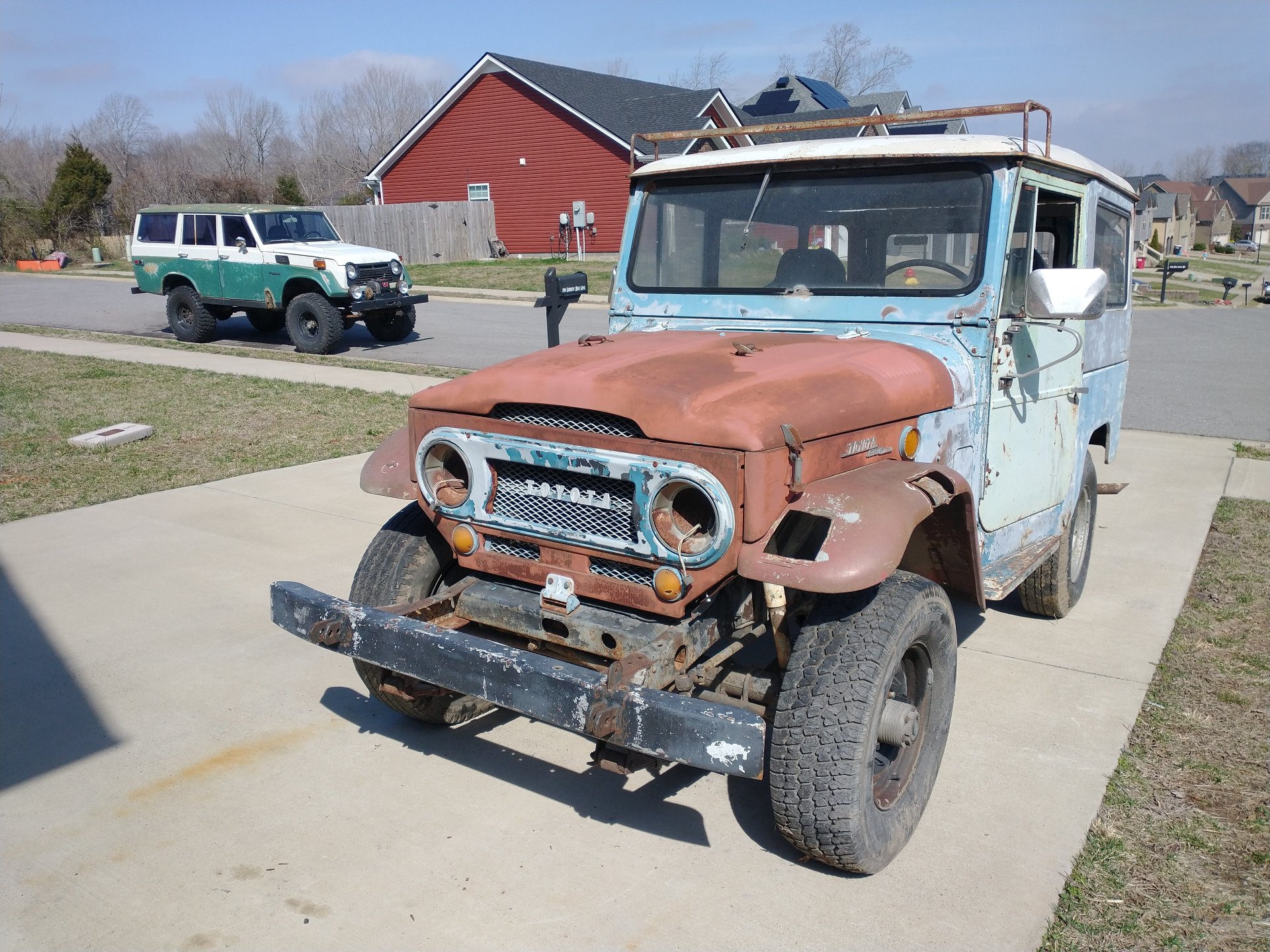 Arrived relatively event free except when the rental truck I was towing with had a momentary full electrical failure, at 60 mph on the interstate, in heavy flurries. I started flipping switches and pushing buttons until electric power returned, except my left rear taillight and trailer running lights, which crapped the bed. I drove to a hotel then and racked out until dawn

Thankfully, helpful motorists decided that flashing and blinding me with high beams would assist me in trying to get off the interstate. I'm thankful for their kind assistance.

While everything more or less arrived safely, there were two minor casualties. Both the gas cap and the cowl vent literally took a flier. 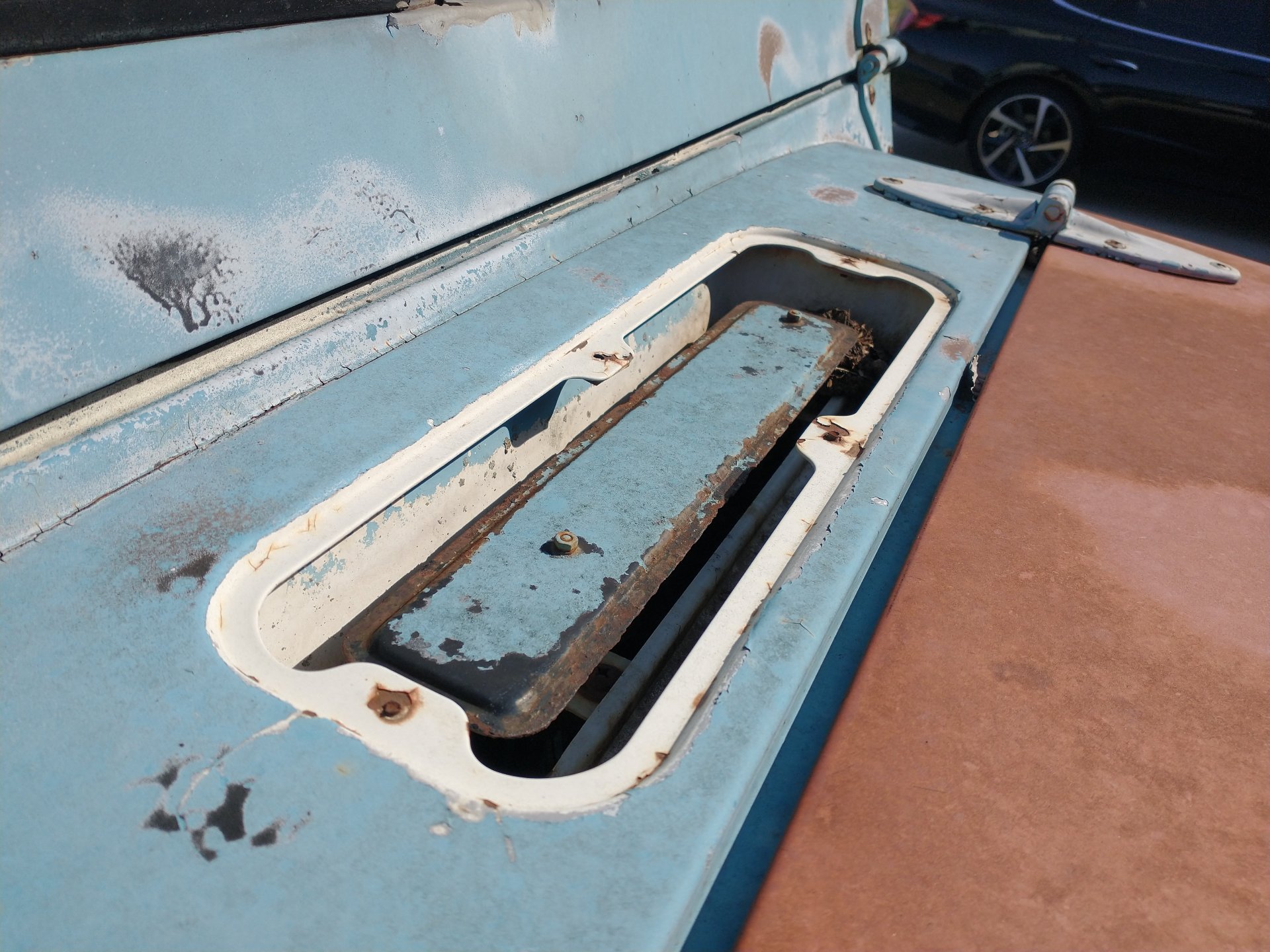 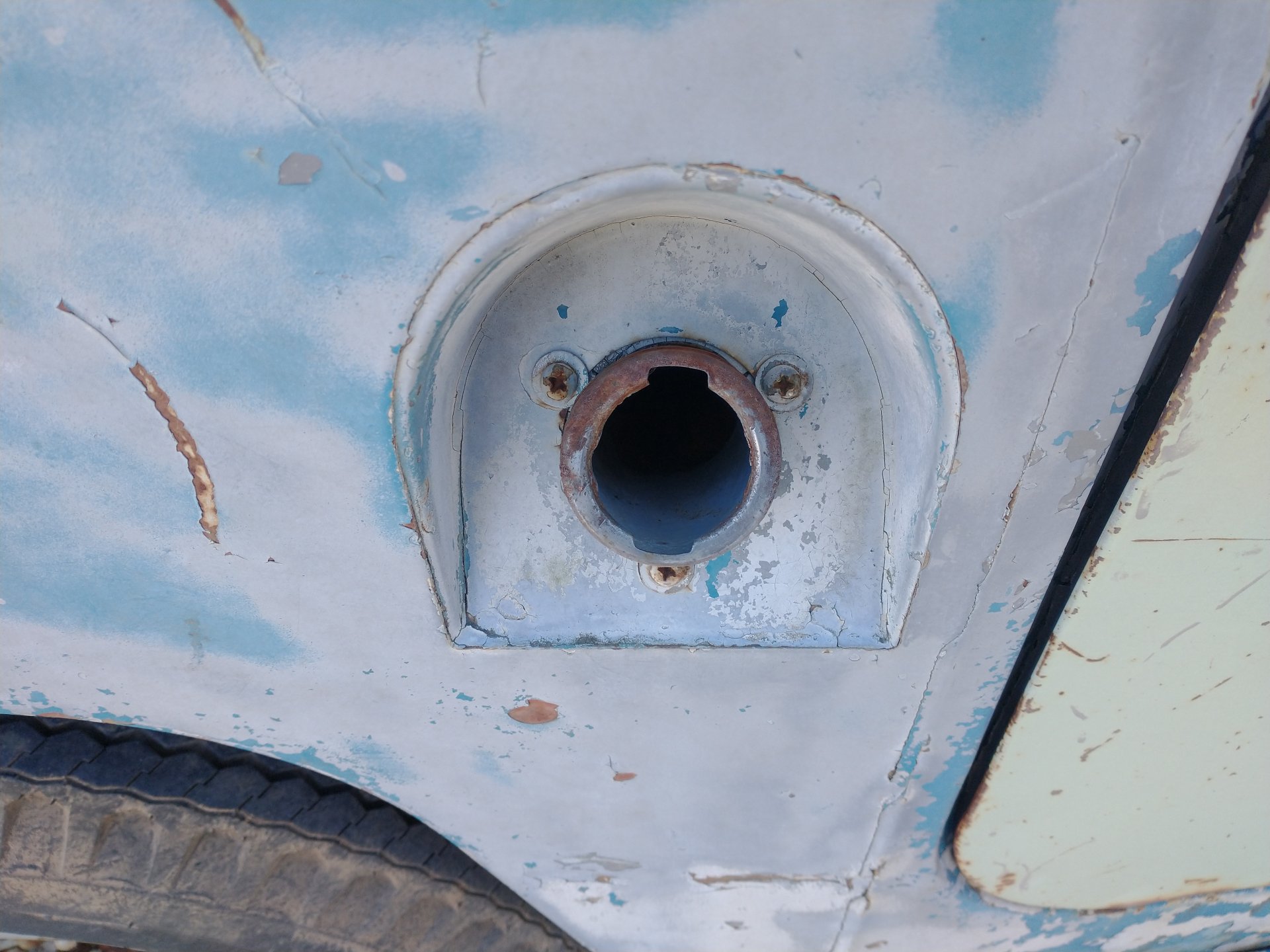 Part of my plan involves neighbors not thinking I'm starting a junk car yard. Because of this, I'm going to be installing some parts I will remove later. Putting in the headlights was job 1. 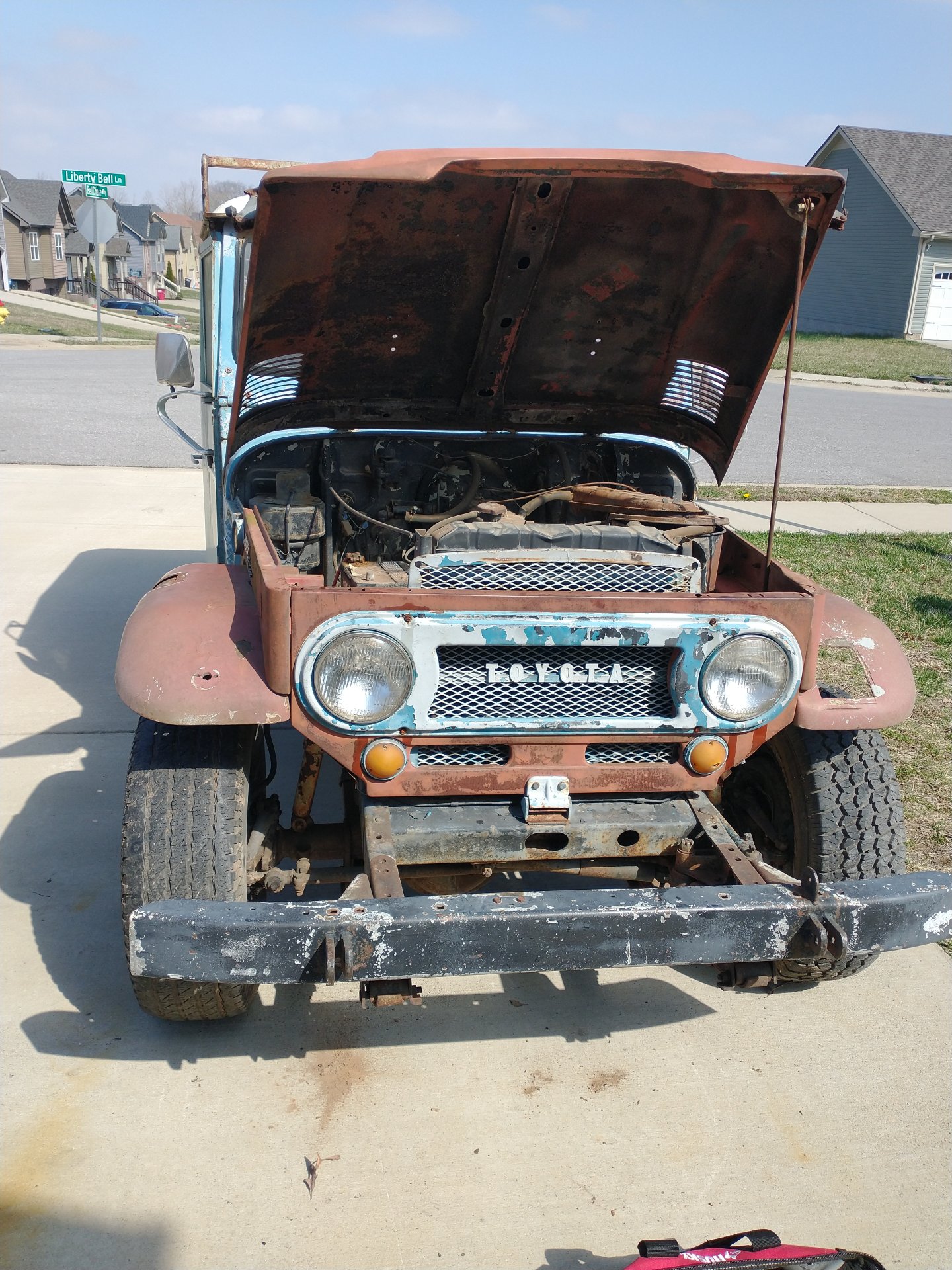 The bumper is also a temp install.

Next week the kids are up and I'll need my garage space to work on their vehicles, but the week after that, Mavis goes in the garage and things should progress hammer and tongs.

State of the engine: 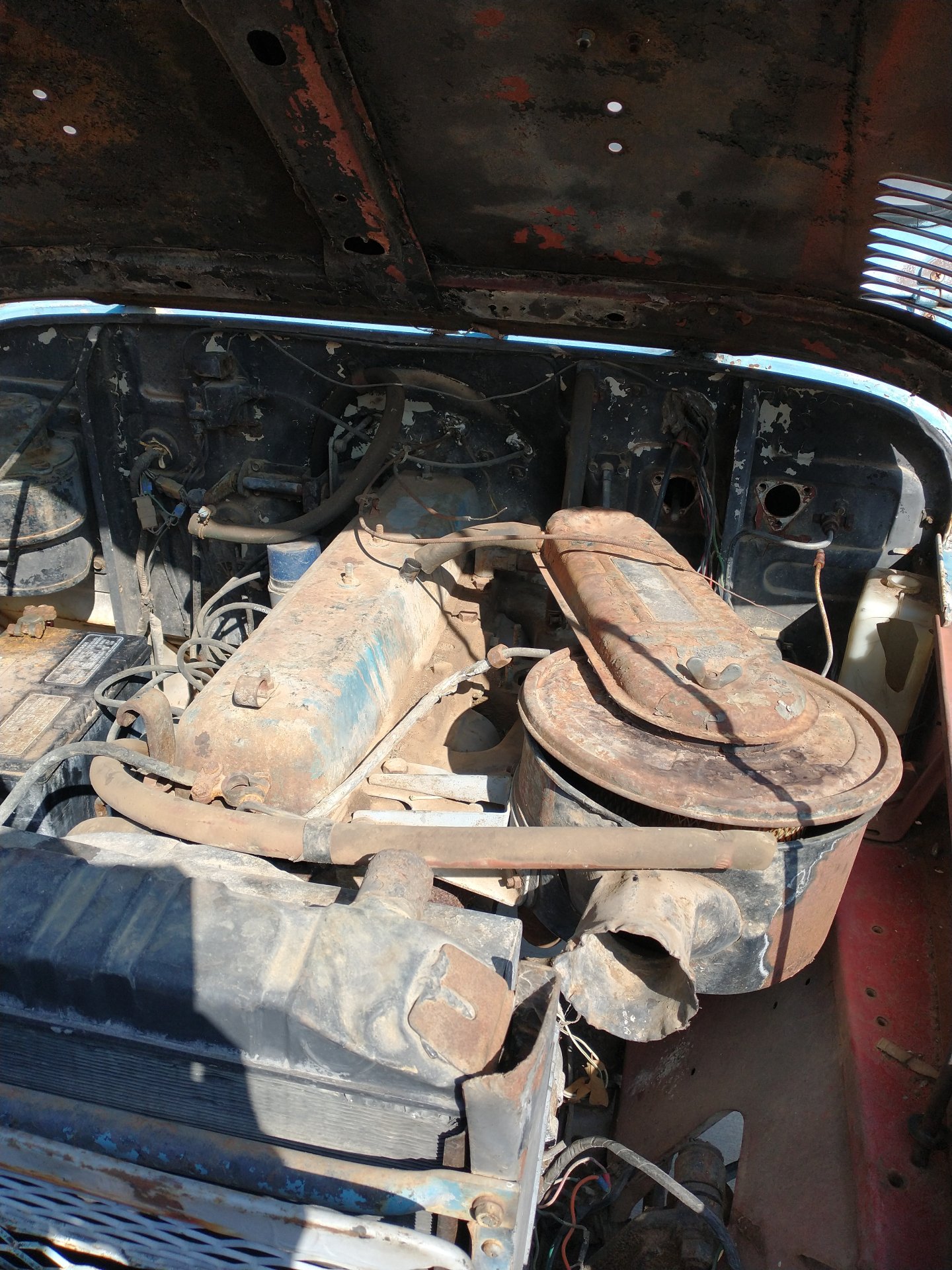 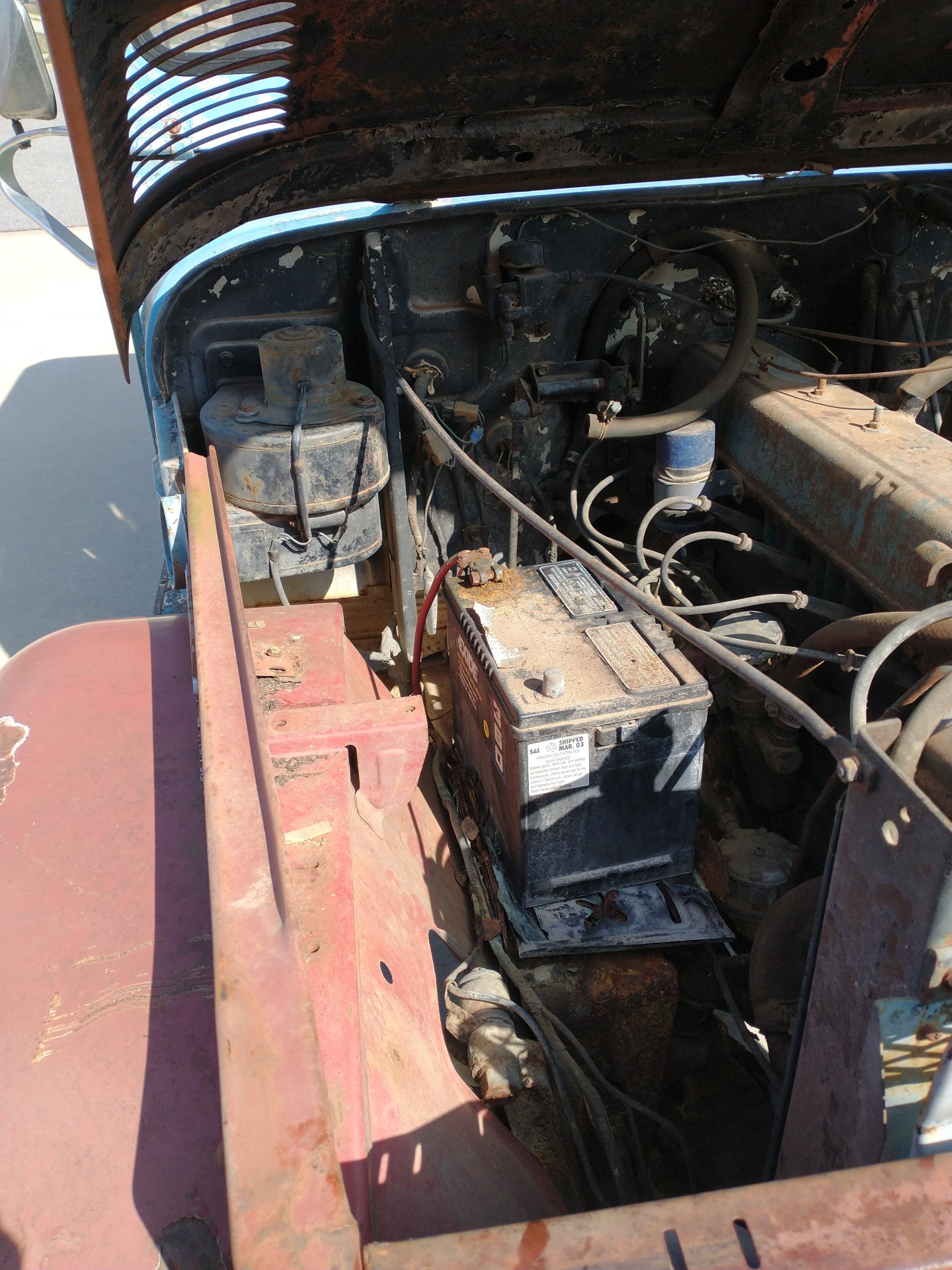 Motor is stuck, so will start on that forthwith.

BTW, found my local machine shop guy has extensive experience with the GM six as well as the F series Toyota engine. Downside is that he is backlog; good side is he has an excellent reputation.

Thankfully, helpful motorists decided that flashing and blinding me with high beams would assist me in trying to get off the interstate. I'm thankful for their kind assistance.
Click to expand...


Never under estimate the kindness of others when your driving blind in a snow storm.....
The Mule Abides

BTW, the 40 of Many Colours started out white. 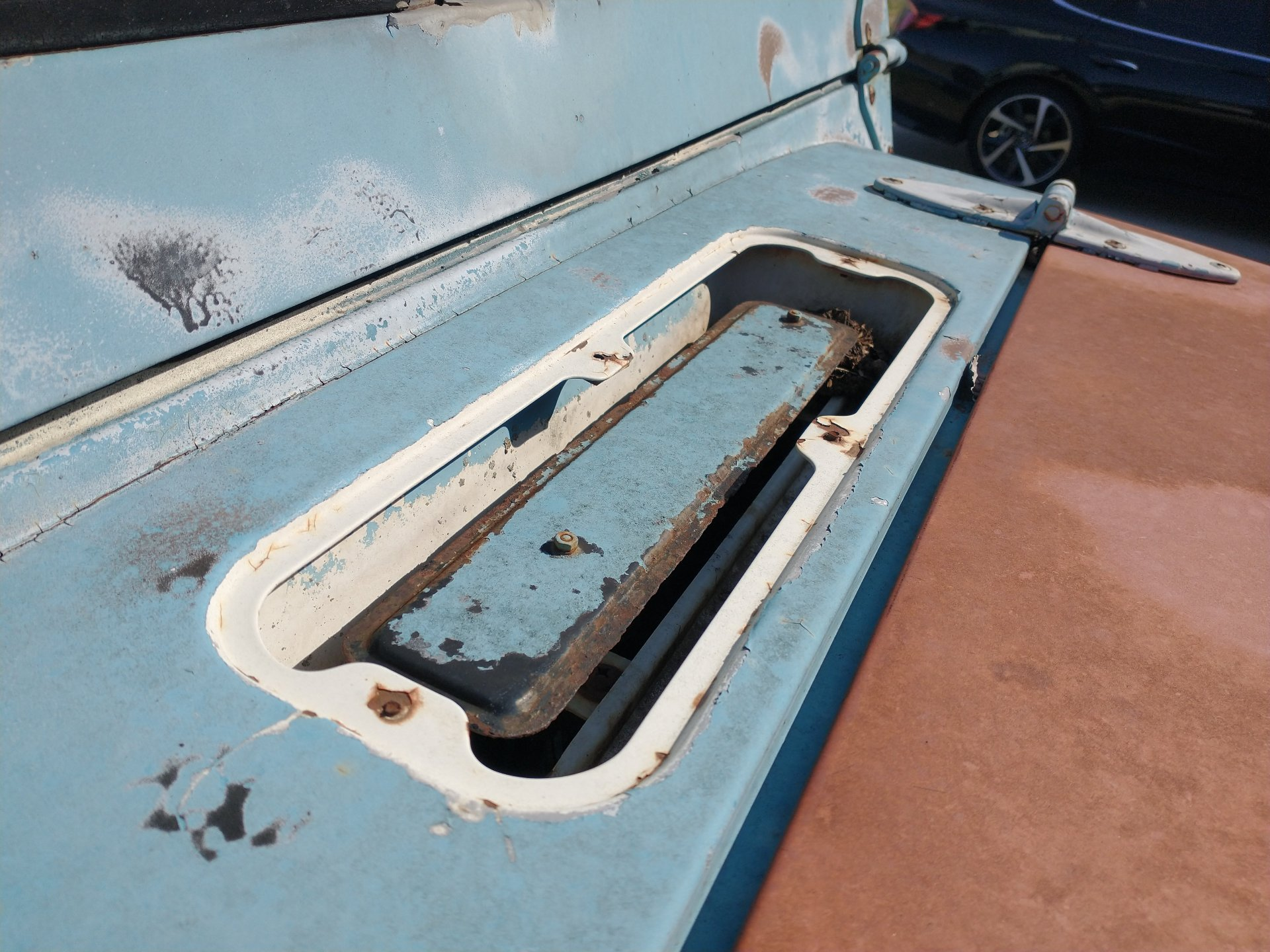 Everywhere that hasn't been painted over is that color.

61twpw said:
Look in first pictures, cowl vent off there. I thought it was missing when I got it. Only “loss” was funky gas cap.
Click to expand...

I just finally noticed. Still need a cowl vent, then.

If anyone wants to hook me up with those and/or the cowl vent, I'd appreciate it. With money. 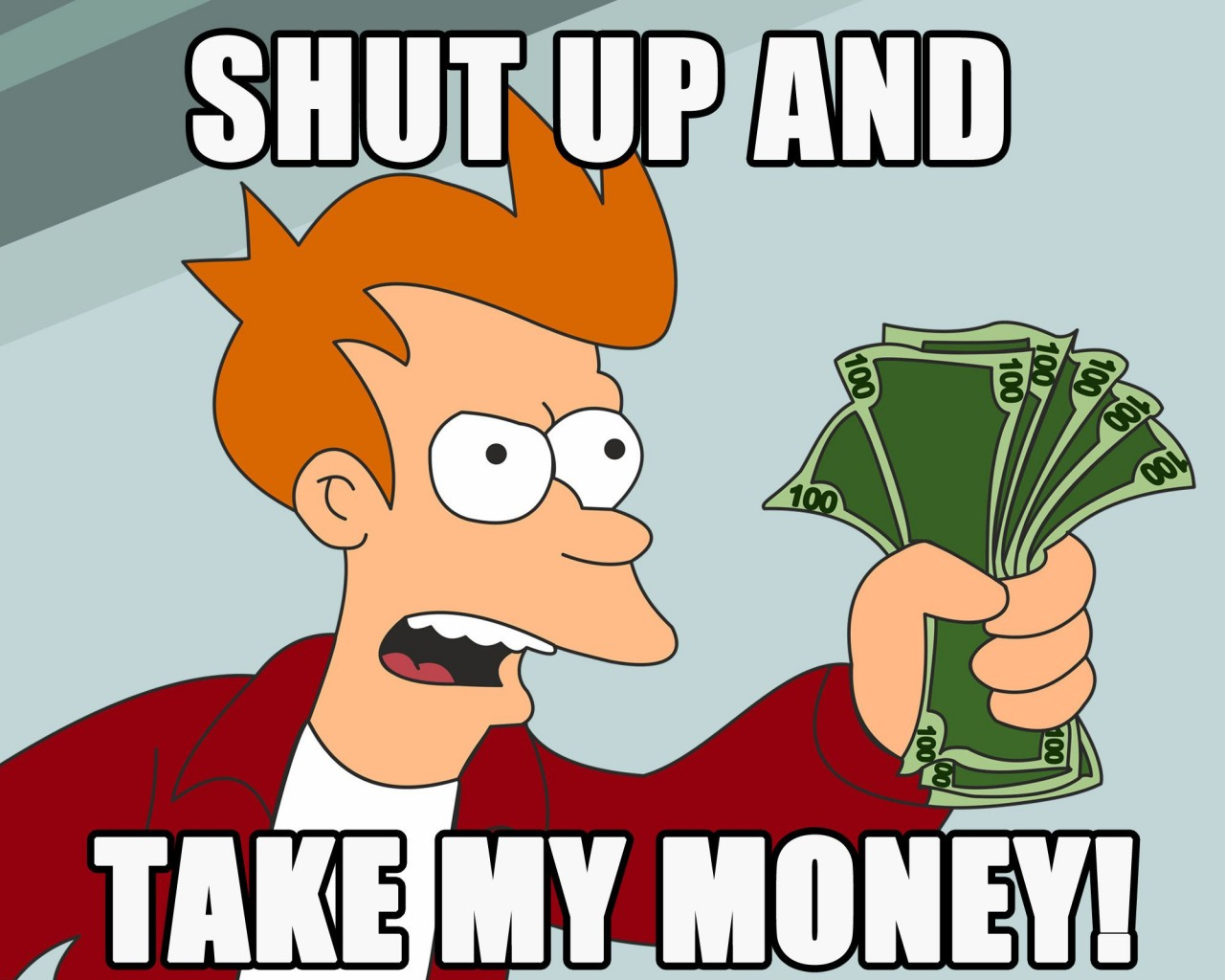 I drove an old Chevy C10 that had a similar color scheme in high school. Donor parts from who knows what didn't, matter the color. It was nicknamed the Picasso truck by my classmates. At the time it was not so funny, looking back, it was fitting.

Too bad the Toyota parts system requires a 17 digit VIN just to look up parts.

Believe it or not, I'm watching Mavis sitting on the driveway being buried in snow. In Tennessee. In March.

Good thing I gave her a good wash before the snow started.
You must log in or register to reply here.