My water pump blew up (coolant everywhere) at the end of last year so I replaced it and all the hoses. While I was doing that I tried to take the thermostat apart and sure enough, both bolts snapped. The FJ went into storage over the winter and there was a tiny bit of coolant under it every time I checked on it. Nothing major, just a few spoonfuls. I finally got around to looking for the leak last week. First of all, the radiator drain was plugged up so made a mess trying to empty the system by pulling a hose. Once it was empty, pulled the rad out, flipped it over and drilled into all the gunk (another common problem) that was plugging the hole and cleaned it out (1 problem down). Took a look at all the hoses and the pump and they were all dry but the thermostat housing had some coolant residue around it. Read up on the issue here and seemed like a simple fix. Picked up some new bolts and was hoping the top of the housing would pop right off and then I could vise-grip the rest of the bolt out. No such luck as the top housing wouldn't budge.

Question 1 - Is the top of the thermostat housing threaded for the bolts? I know people say to replace with stud bolts but that would mean the top is not threaded, would it not? If it's not threaded, any reason why the top would not just pop off? Tried a mallet, but no luck. Don't want to chance removing the housing from the block just in case those bolts snap.

Question 2 - Is there a secret to pulling the radiator drain plug without getting coolant everywhere? Besides, do it quick?

the upper thermostat housing is not threaded. depending on where the bolts broke, they could be holding things together or just old age holding it all together.
my opinion is to just replace both pieces, chances of drilling the 2 bolts out straight and actually getting the steel bolts out of the aluminium housing are very slim. 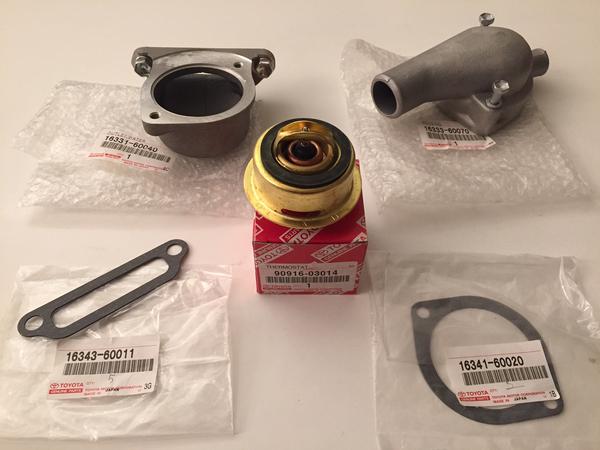 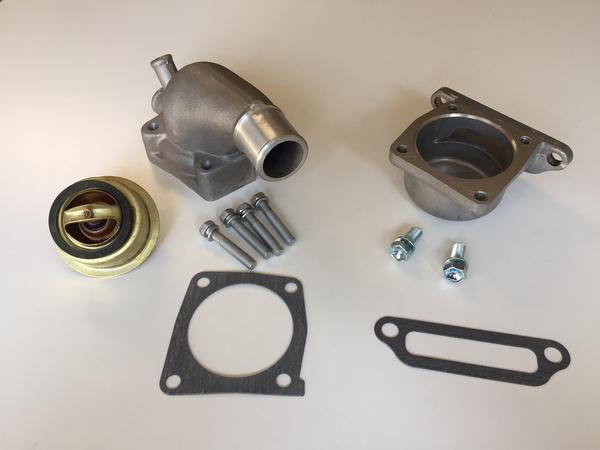 Complete kit to replace the thermostat housing assembly for Toyota Land Cruiser FJ60 or '81 to '84 FJ40 with oil cooler (as per U.S. spec). All parts are genuine Toyota OEM. These upper and lower thermostat housings do not accommodate BVSV, thus should not be used on vehicles that need to be...
www.cityracerllc.com

I put a hose over the petcock to minimize splashing.

It's the corrosion of dissimilar metals that's frozen the steel bolt shoulders to the aluminum housing top. A good penetrating oil soak may help.
I drilled out and tapped my snapped off bolts 19 years ago so I don't recall the particulars very well but they are now 7/16-14 bolts. I keep them well never-seized now and have to enlarge the bolt holes in the gaskets when I change them but the modified housing works fine. I just looked and I see a spare on the shelf that I drilled and tapped to 3/8-16.
If you plan to replace the housing then It wouldn't hurt to give drilling and tapping a shot.

You could have better luck removing the housing from the block as the bolt threads aren't in a dissimilar metal. However the bolt shoulders are in the aluminum so a good penetrating oil soak would be wise.

Warming things up with a propane torch often helps.

If you get the old bolts out (drilled or otherwise), consider installing original sized heli-coils or Time-serts and then following the advice above on using plenty of anti-seize on the new bolts. I substituted stainless bolts on mine many years ago.
You must log in or register to reply here.
Share:
Facebook Twitter Reddit Pinterest Tumblr WhatsApp Email Link