The slow progress of Spot the Pig

Thought I would start a build thread in here to help keep motivation up and solicit the thoughts of others as I move forward.

Meet Spot. I got Spot from 3puppies in Montana back in May of 2012 and flat-towed him to Calgary and then on to Manitoba. 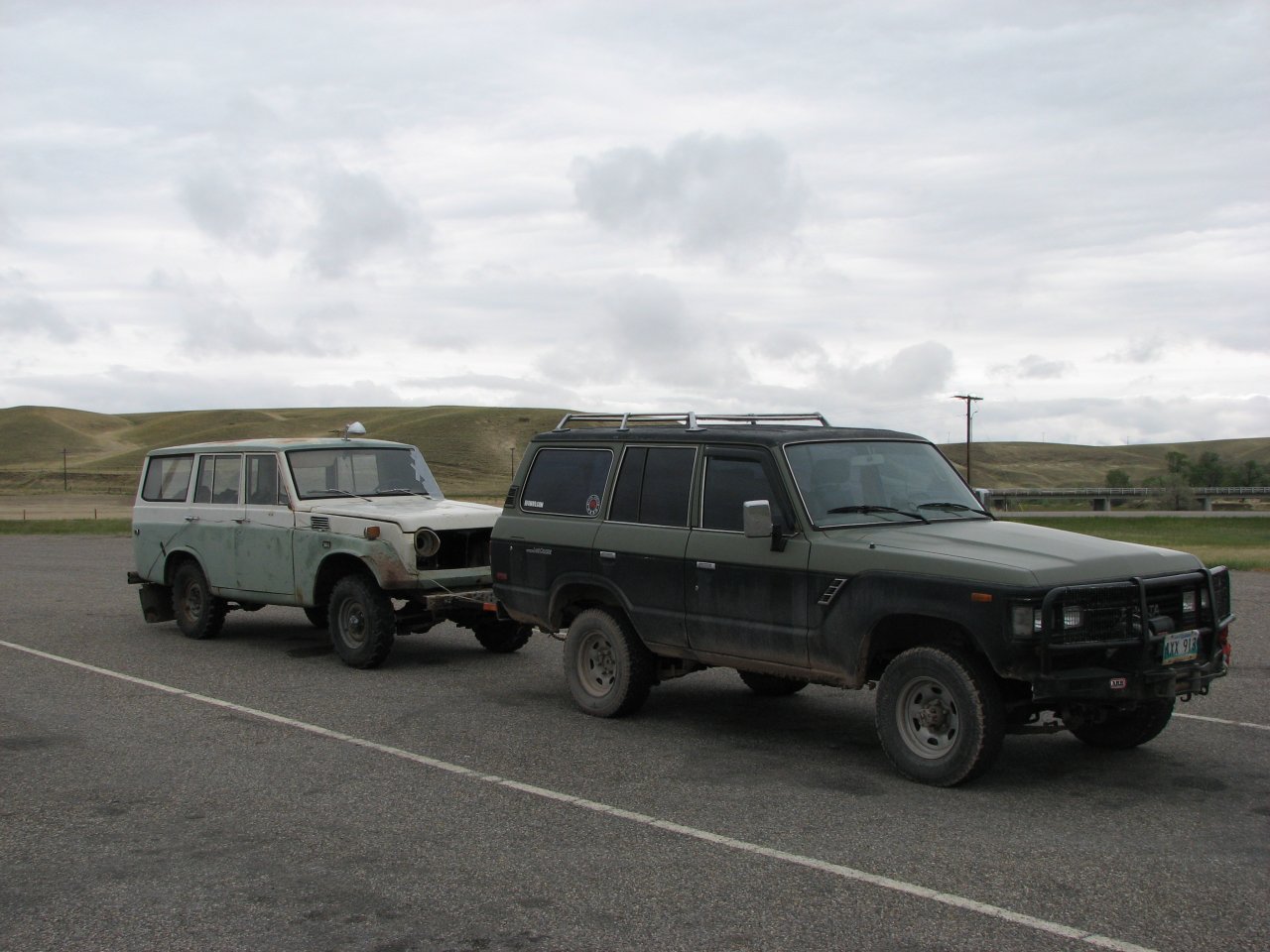 Spot is a '70 FJ55 that came with no engine, but lots of extra parts and a solid body and frame. He'll be a wheeler without worrying much about comfort for on-road travel. The plan is to swap in 60 series axles with e-lockers, a 3FE and a SM420. If I like wheeling a manual, I'll likely get an Orion to replace the stock transfer, if not, in goes the auto out of my 62.

An early attempt to test fit the 3FE showed interference between the stock steering box and the exhaust manifolds, so it came back out, and Spot was parked beside a spare 62 while I went back out to Calgary to look for work. 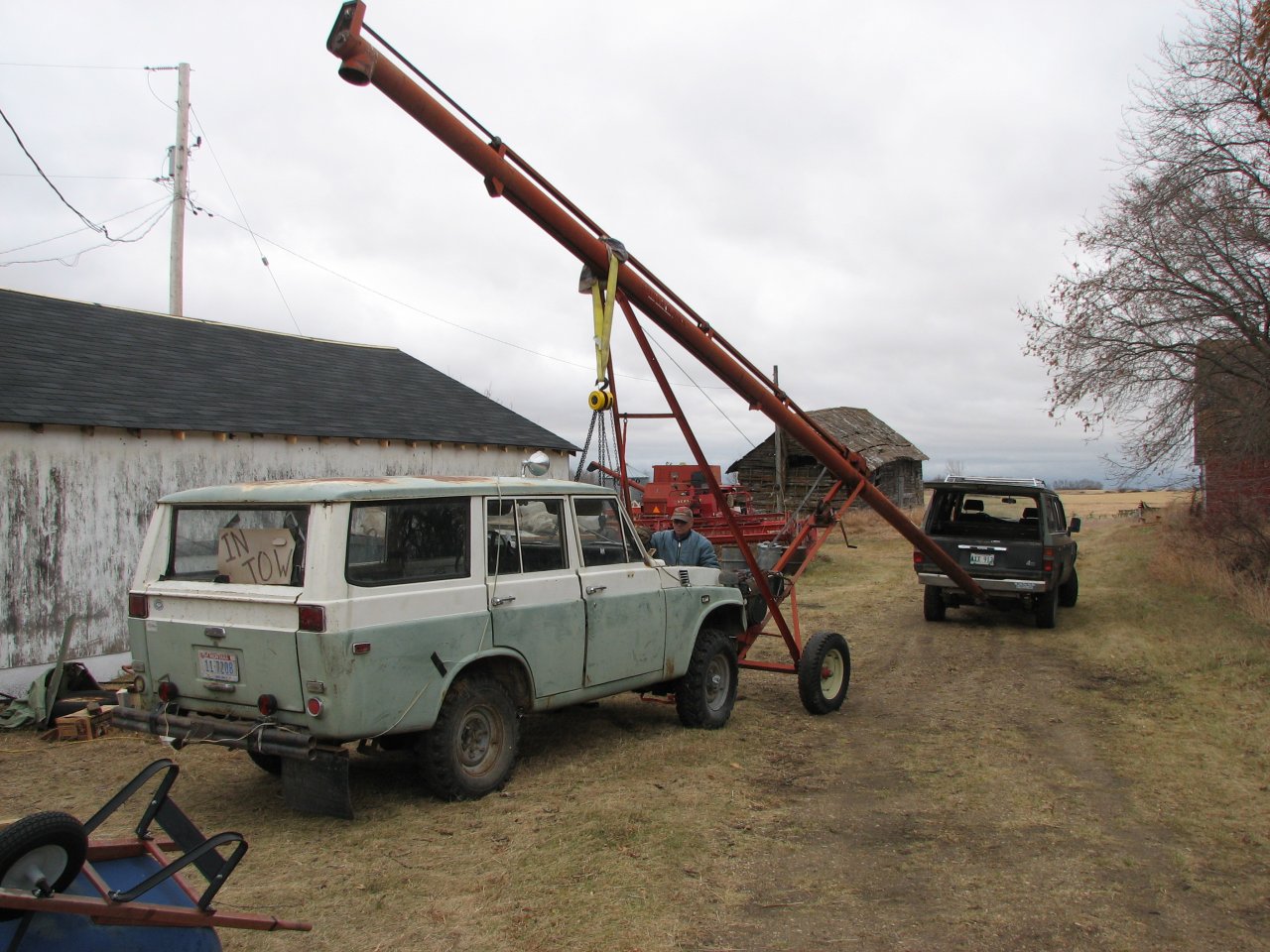 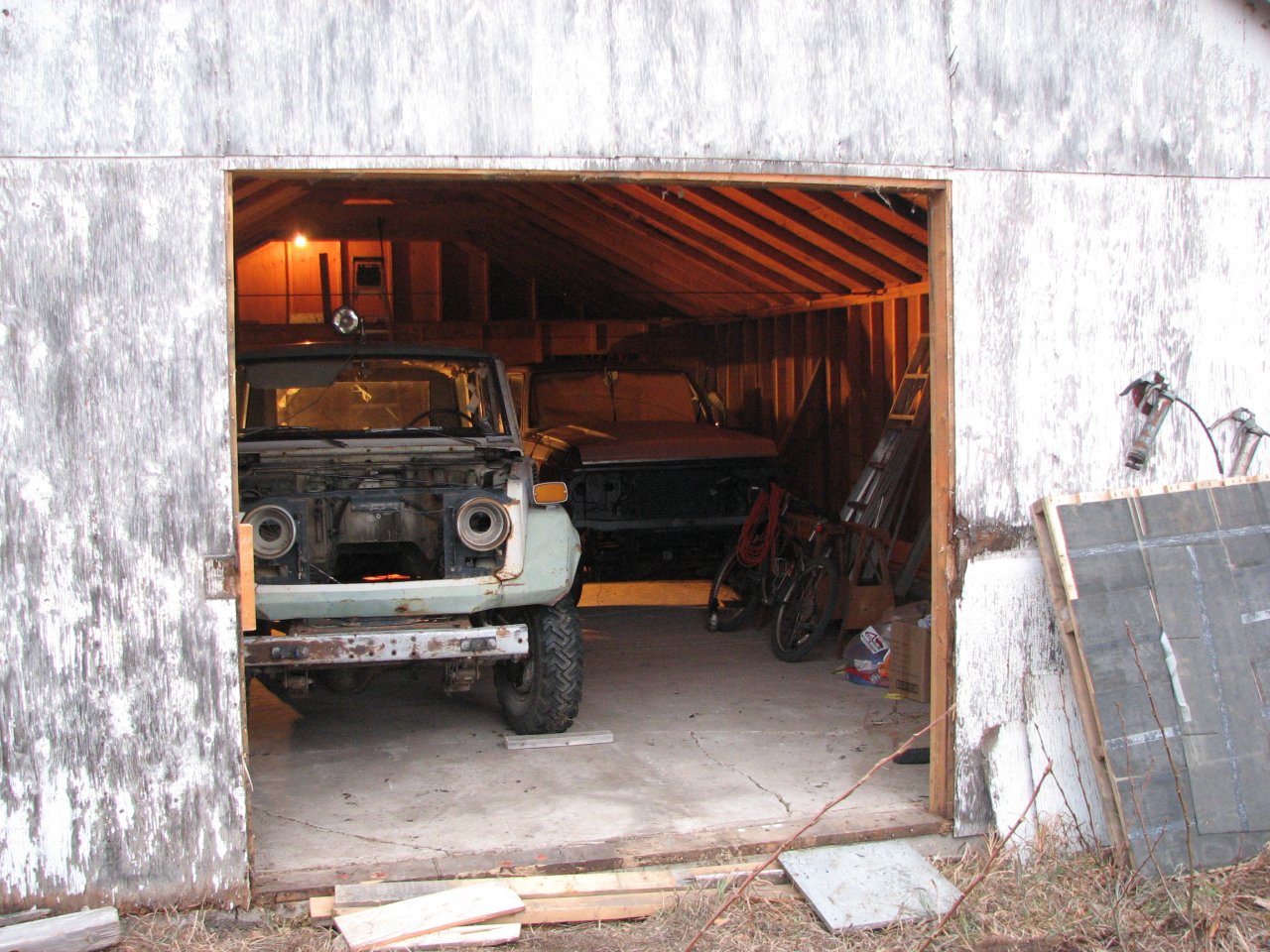 Work didn't pan out in Calgary that winter, but I ended up getting wellsite work back in Manitoba instead, allowing me to live on the family farm and tool around when not working.

Over the last year and a bit I've accumulated some parts. A FF 60 rear axle, a second 80 rear e-locker, lift springs, Longfields (lucked out and got them just before Bobby's family sold to TG), Poly Performance shafts for the rear, and a thwack of body parts that Dean grabbed for me (thanks again).

Anyway, some progress and more pictures. I've gone through the rear axle, making new spring perches to suit the narrower frame, added trussing and a bit of a diff skid made from a cultivator shovel. 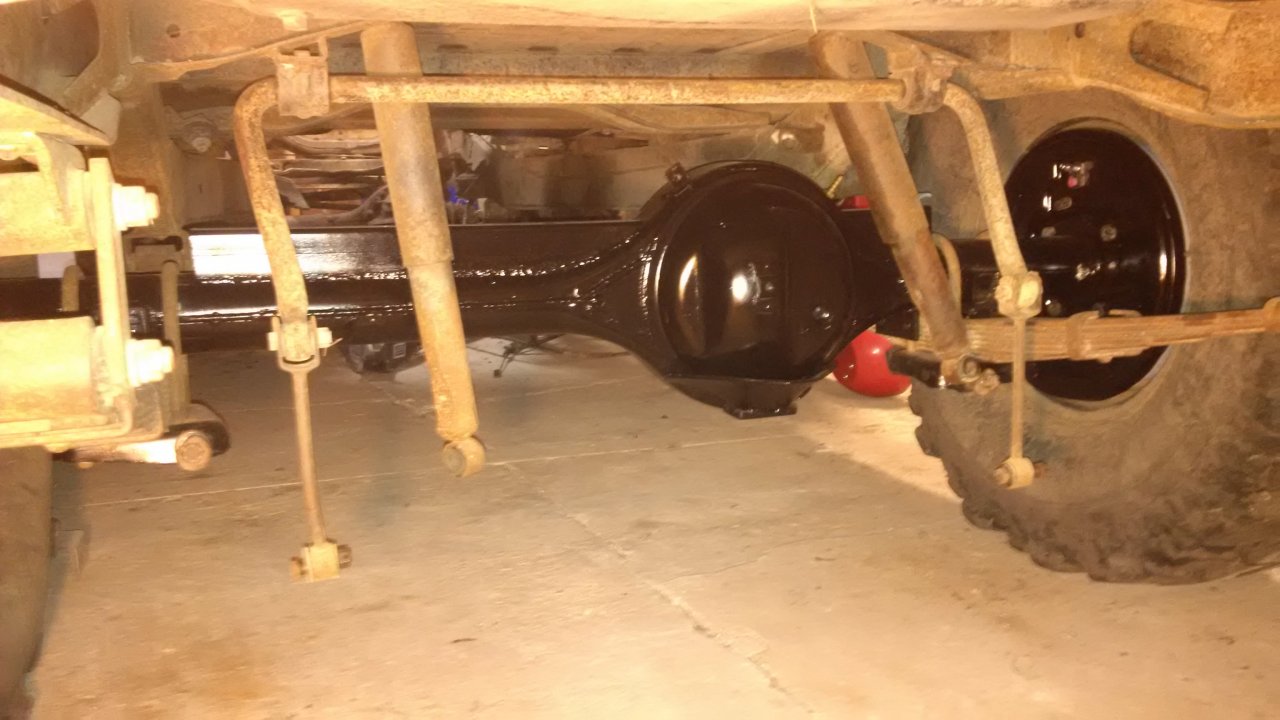 Housing is bolted in and hubs are back on, which means I have been able to throw tires on to get an idea of the stance. This is with 33x12.50's on 60 series rims with stock springs. I intend to add lift springs after I get it safetied, and will likely end up on 35s or 36s. 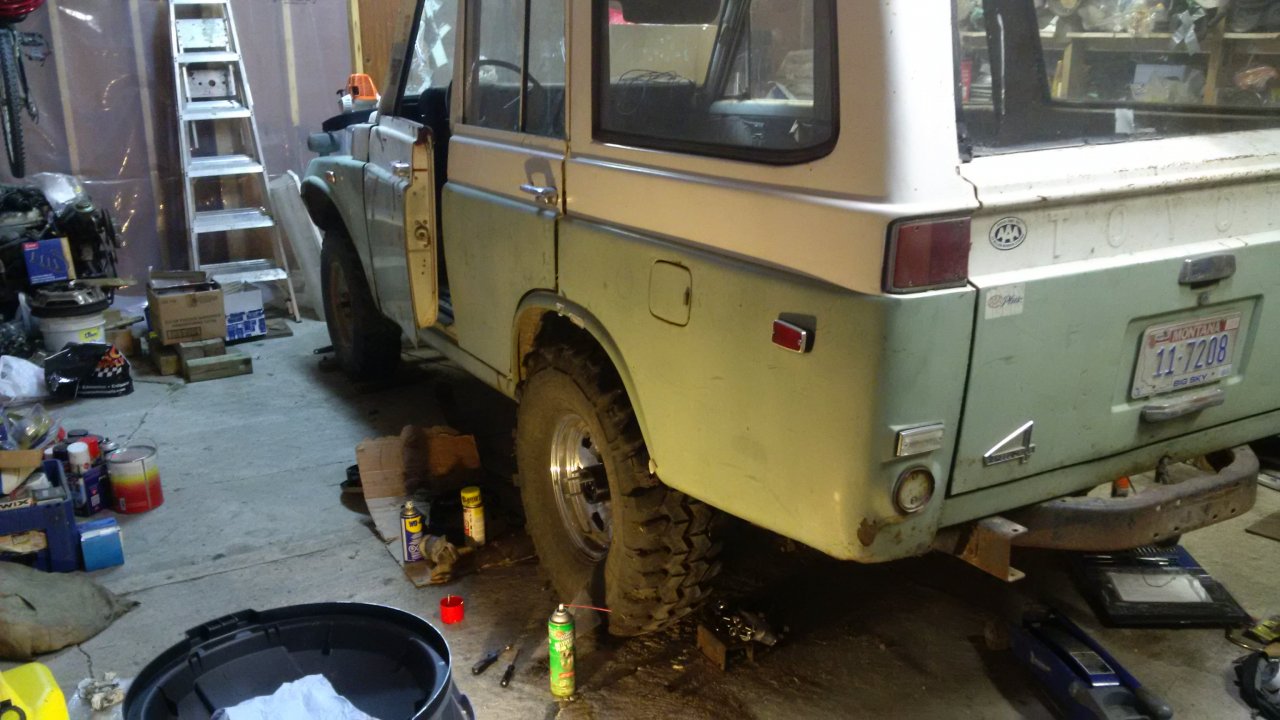 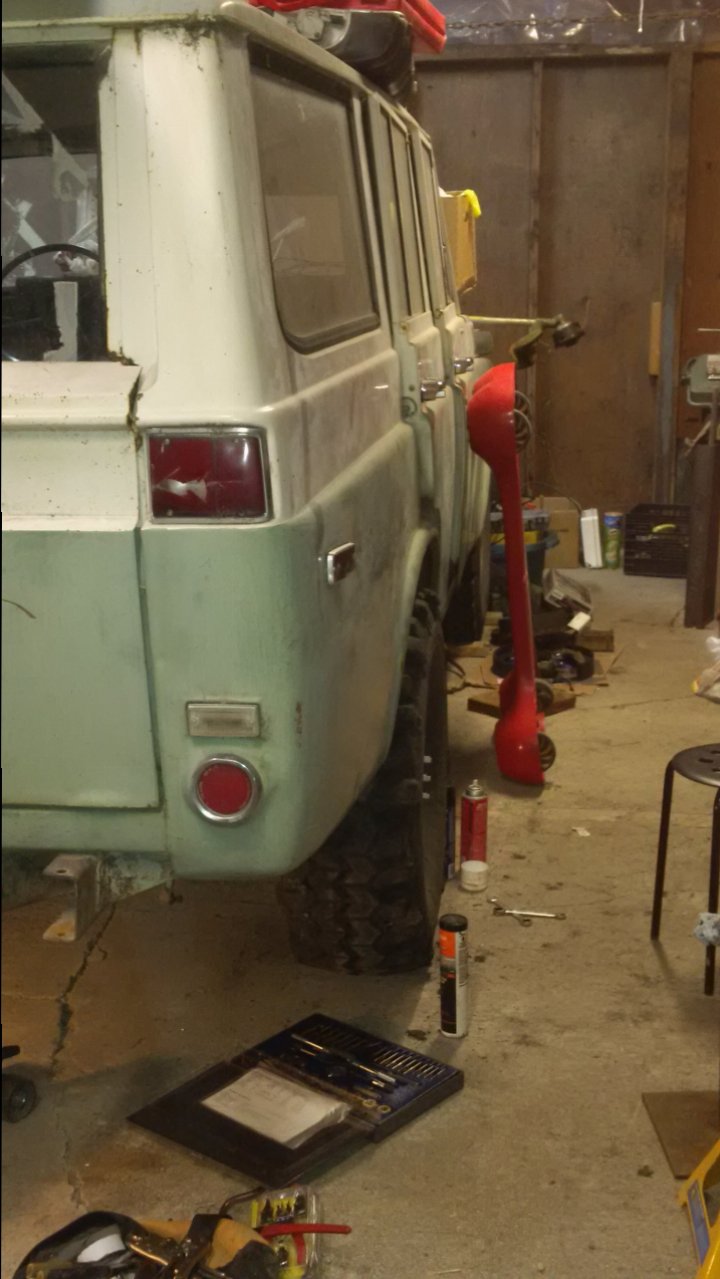 I picked up ARP hub studs for the front and rear, but after some reading in the hardcore section and feeling that the threads in my hubs aren't as tight as I would hope, I've decided to go a different route for the rear at least. Today I picked up some 3/8" dowel pins to replace the stock 7mm pins and I have some 7/16" socket head cap screws coming to replace the 8mm studs. This pic shows the increased beef (tap standing in for the cap screws). 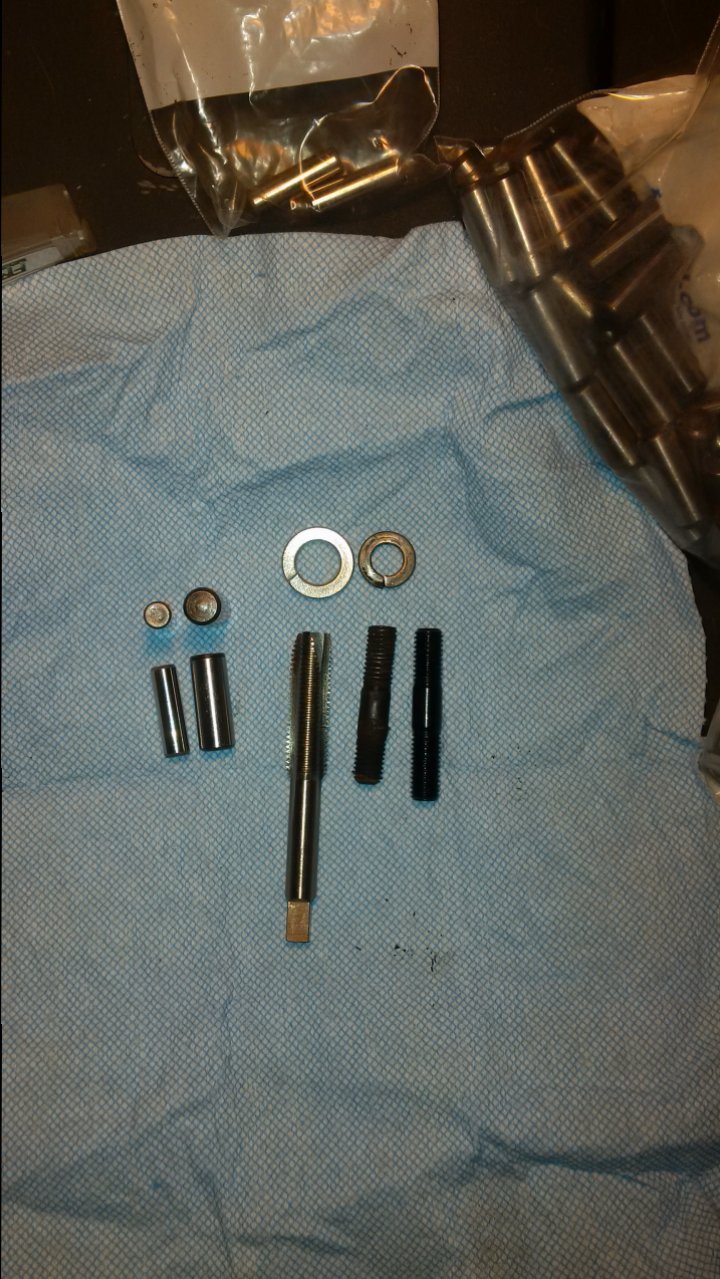 The drivetrain bits sit in the corner, need to get a clutch disc, then I can start piecing it together in the truck. If anyone happens to have some 3-speed bellhousing/clutch bits kicking around, I would like to get my hands on an inspection cover and some small stuff. 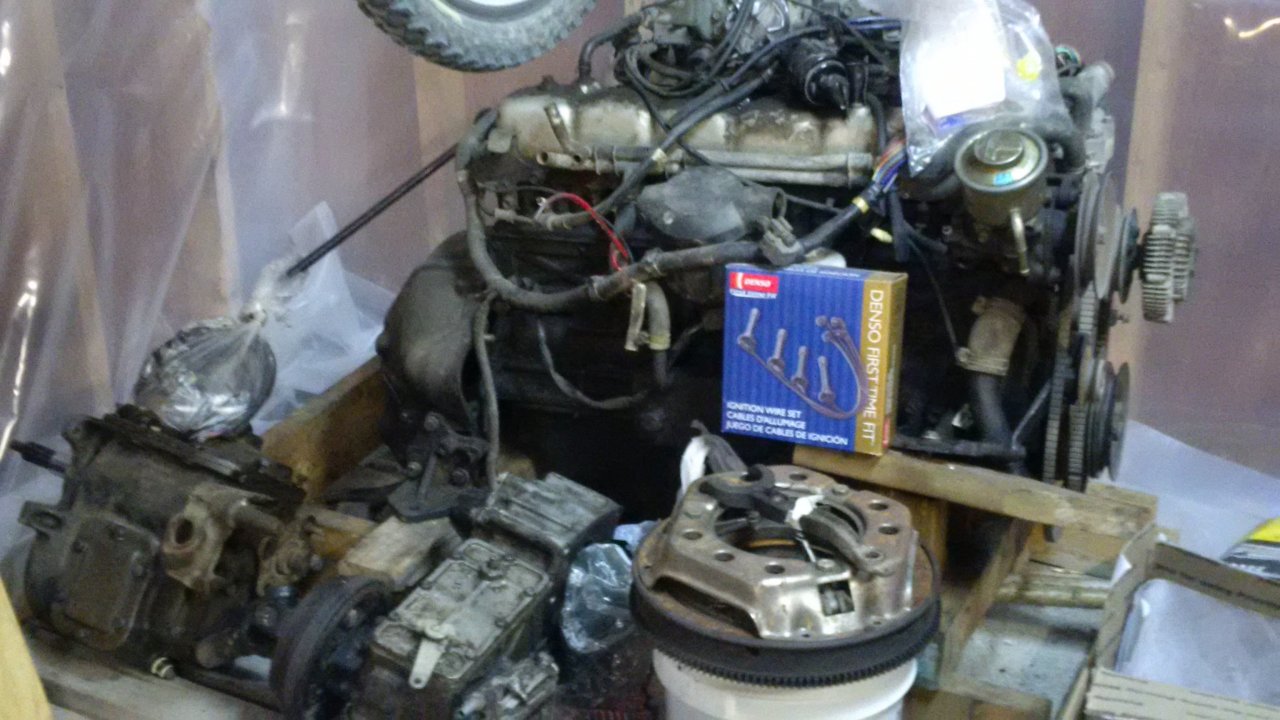 One more pic, just cause it's nice to see one with the grill in. 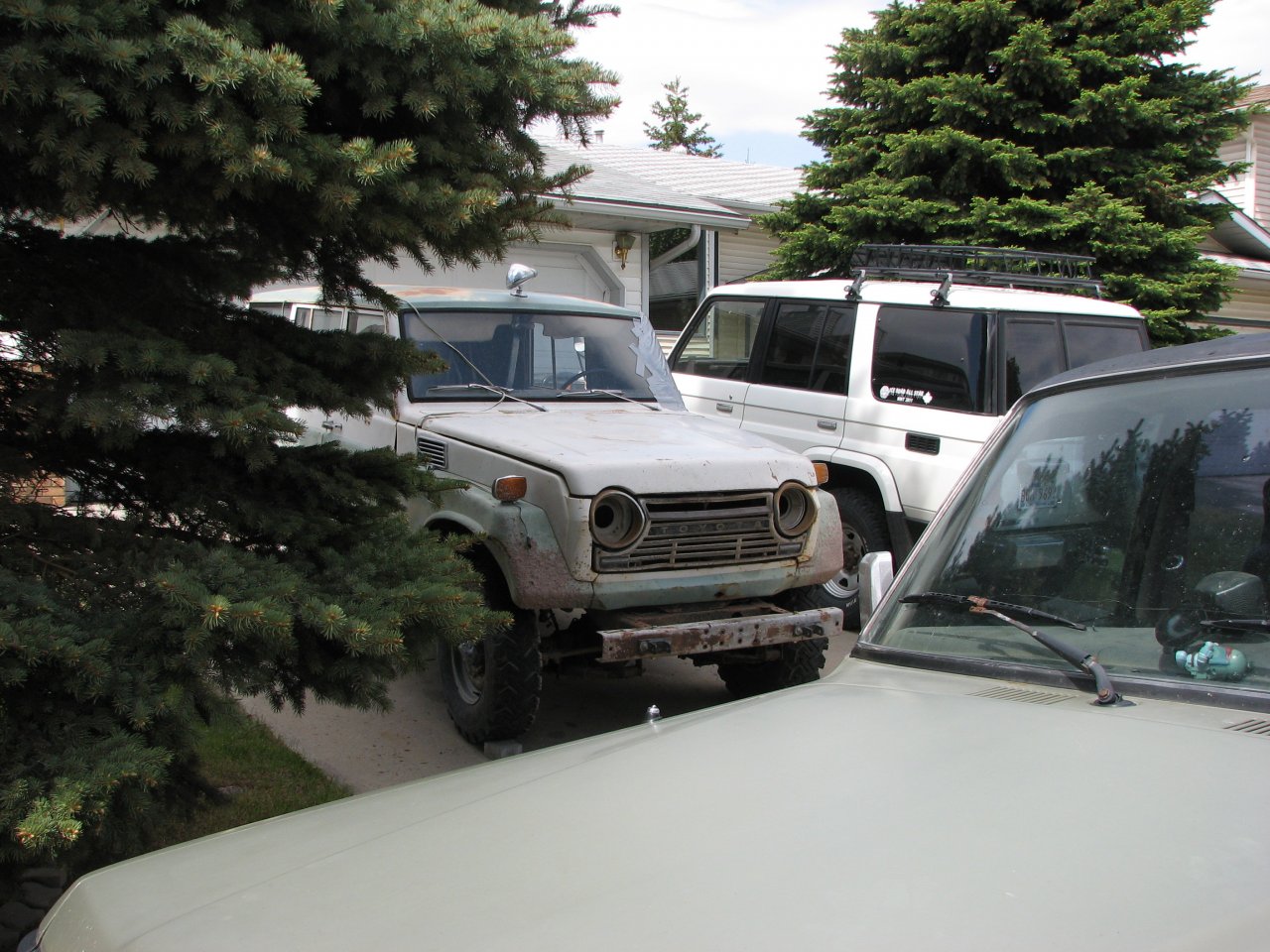 That is gonna be sweet. I would love a wheeling pig!

Good Job Curtis, that will be a sweet old school truck when your done!

Got some time in the shop tonight and got a start on beefing up the short side.

First I used the angle grinder to cut the end of the stock dowel pin flat. It then spun free with a crescent wrench and pulled out with vice grips. Since I had already loaded the hubs with bearings and seals, I wrapped and taped them to keep crap out. 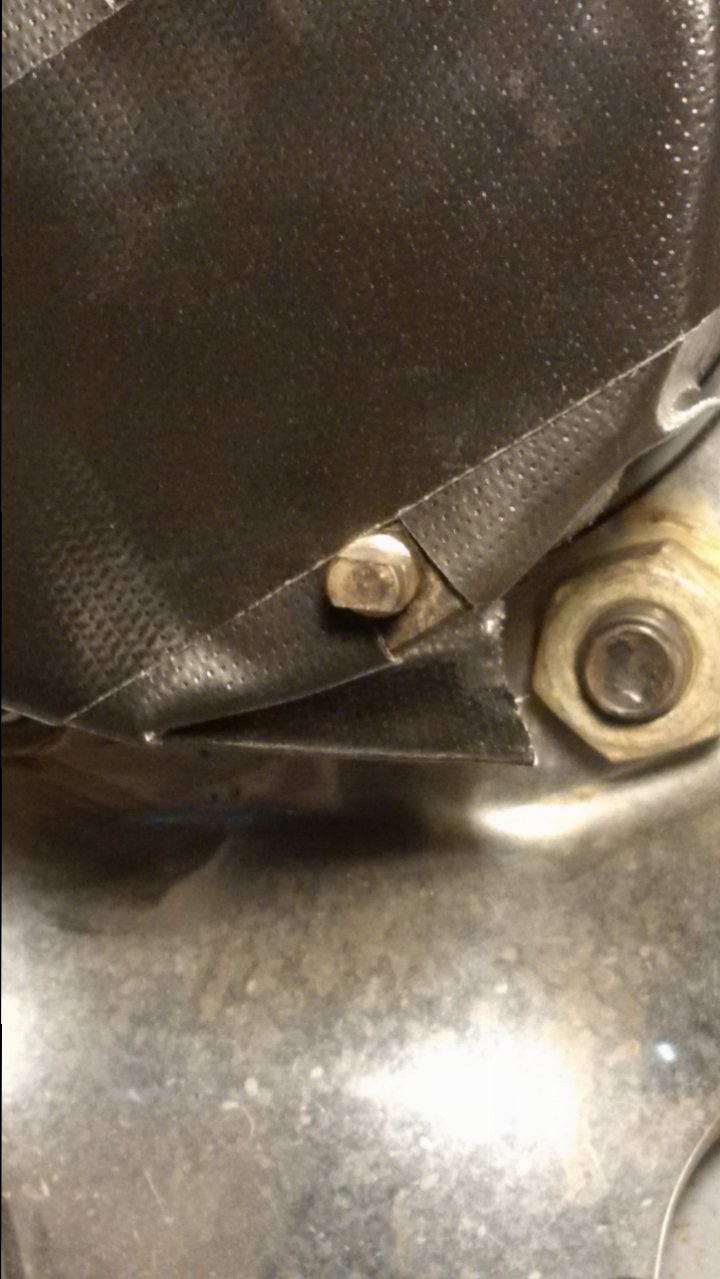 Next I attached the axle shaft with 3 studs and plunked the assembly into the drill press. 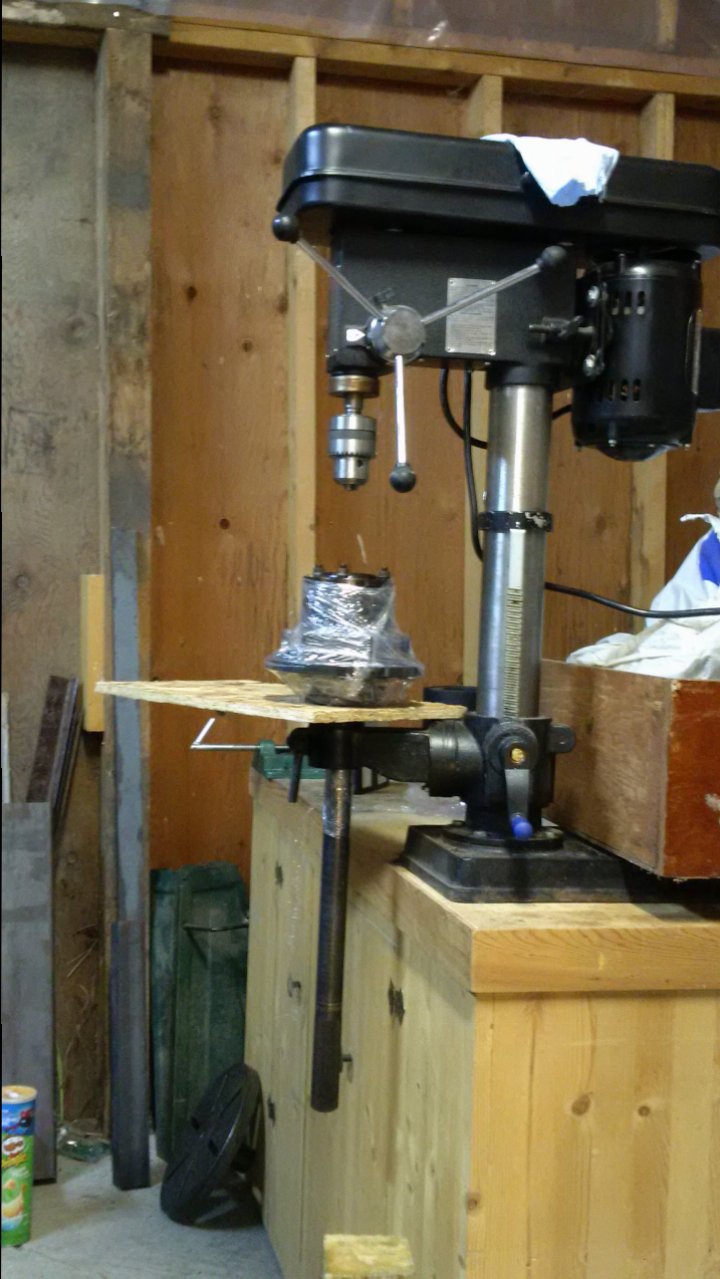 I match-marked the hub and shaft so it's it'll be easy to keep them aligned. 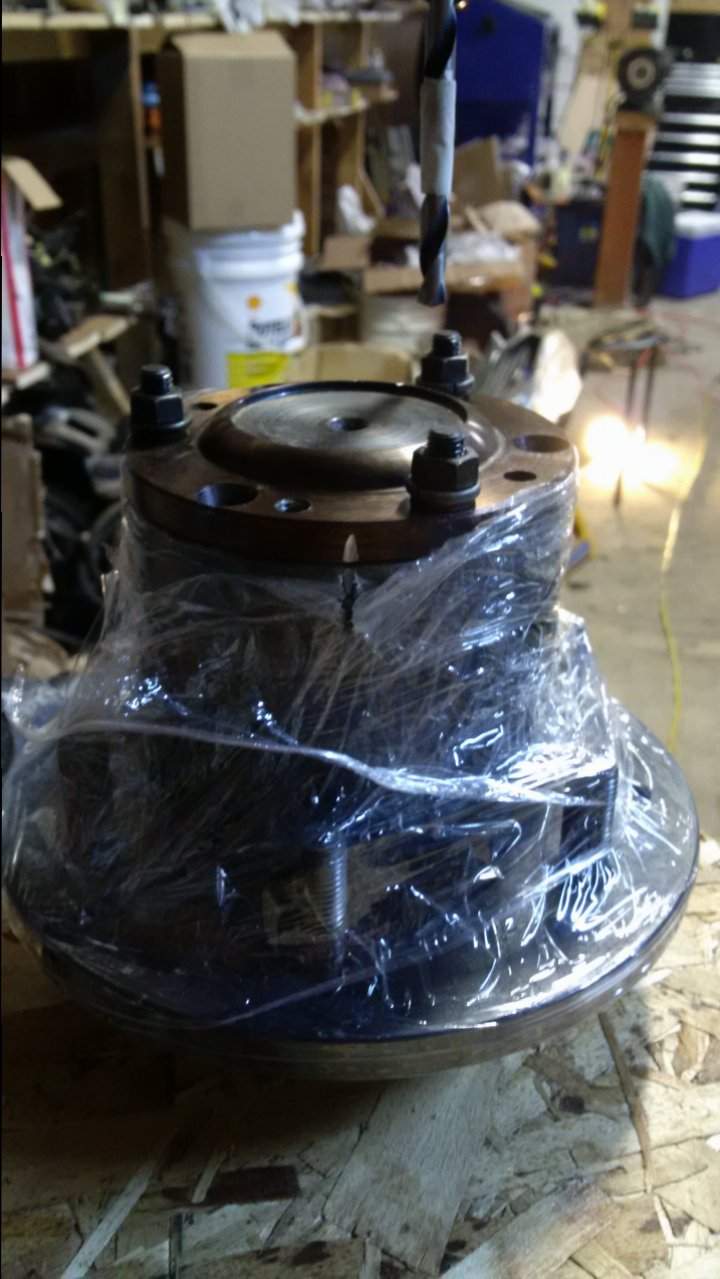 I had to flip the base of my benchtop drill press so the axle shaft could hang down in front of it. I enlarged the existing pin holes and cut 2 new ones so the pins will be doubled in number and much larger. I've drilled them out to 11/32", but will need to see if I can find a 23/64" bit as a test hole cut with a 3/8" bit seems too loose for a good tight fit in the hub, though it may be good for the flanges. 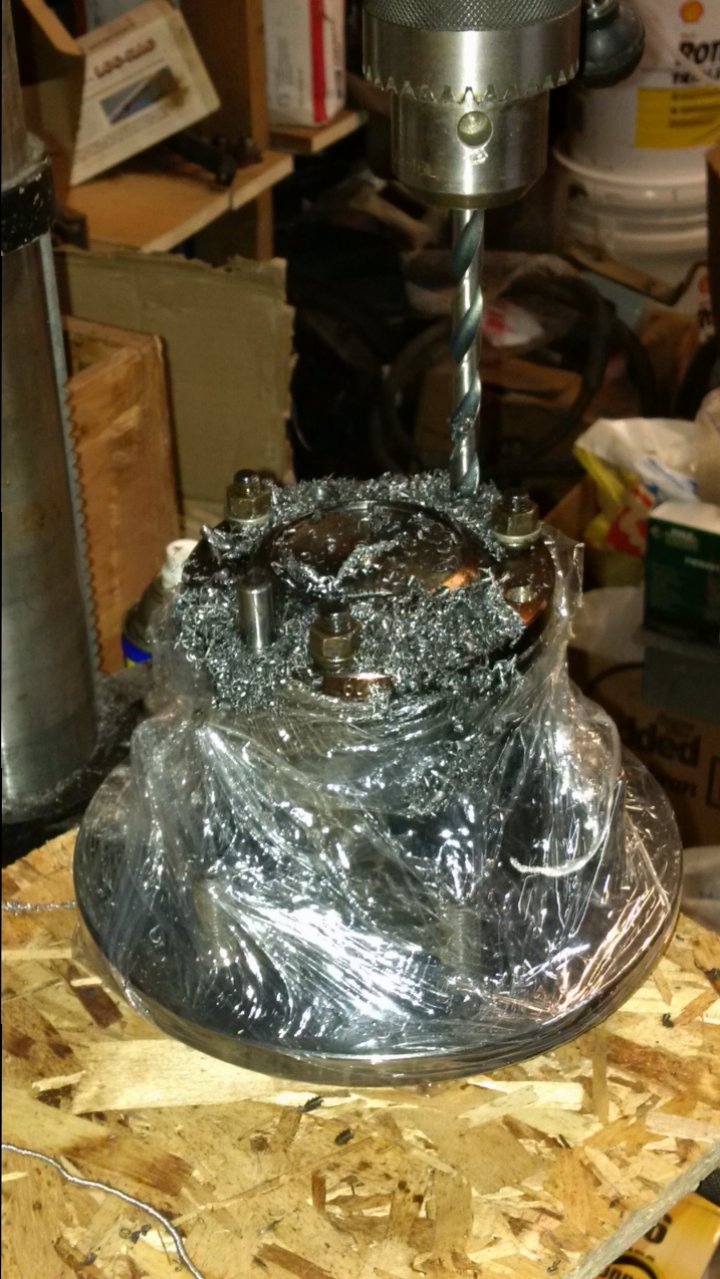 A couple threads this upgrade is based on:

Got the pass side done last night, along with loading in the brakes. Getting at the drive side tonight. A bit tedious with mating and separating the shaft and hub repeatedly, but seems to have worked out nice and tight so far. Wish I had decided to do this before greasing and installing the bearings / seals . 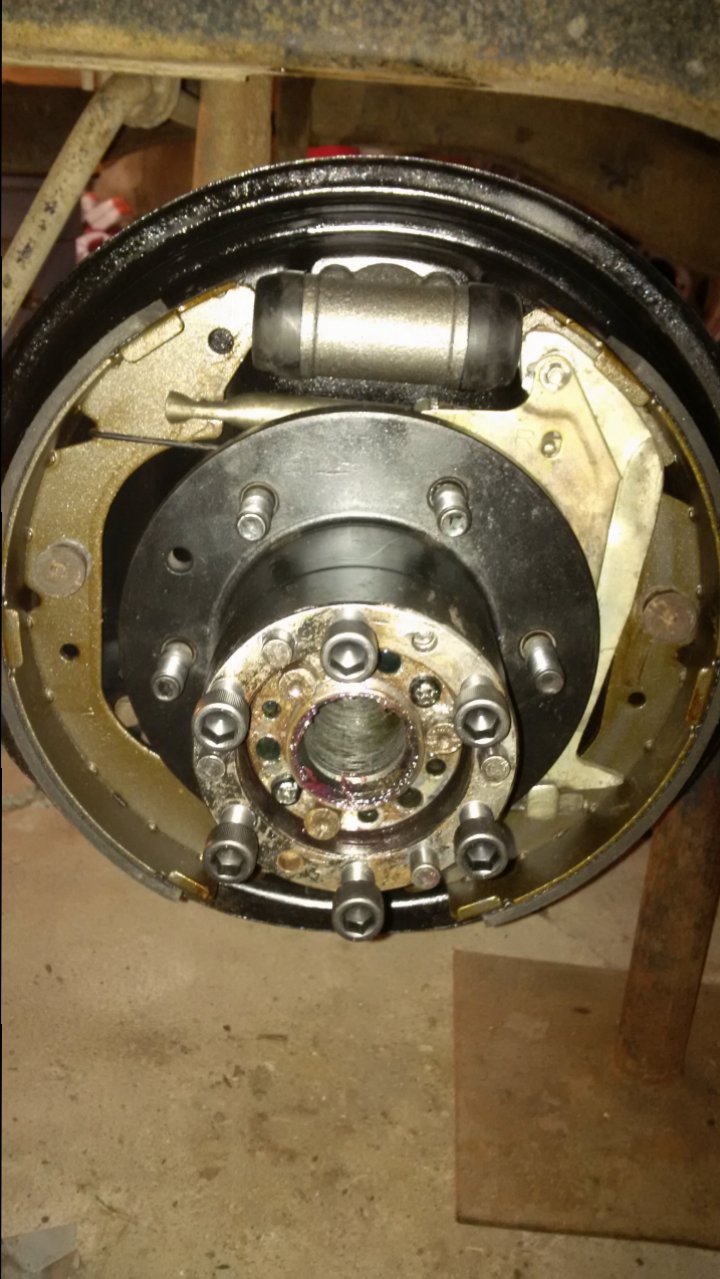 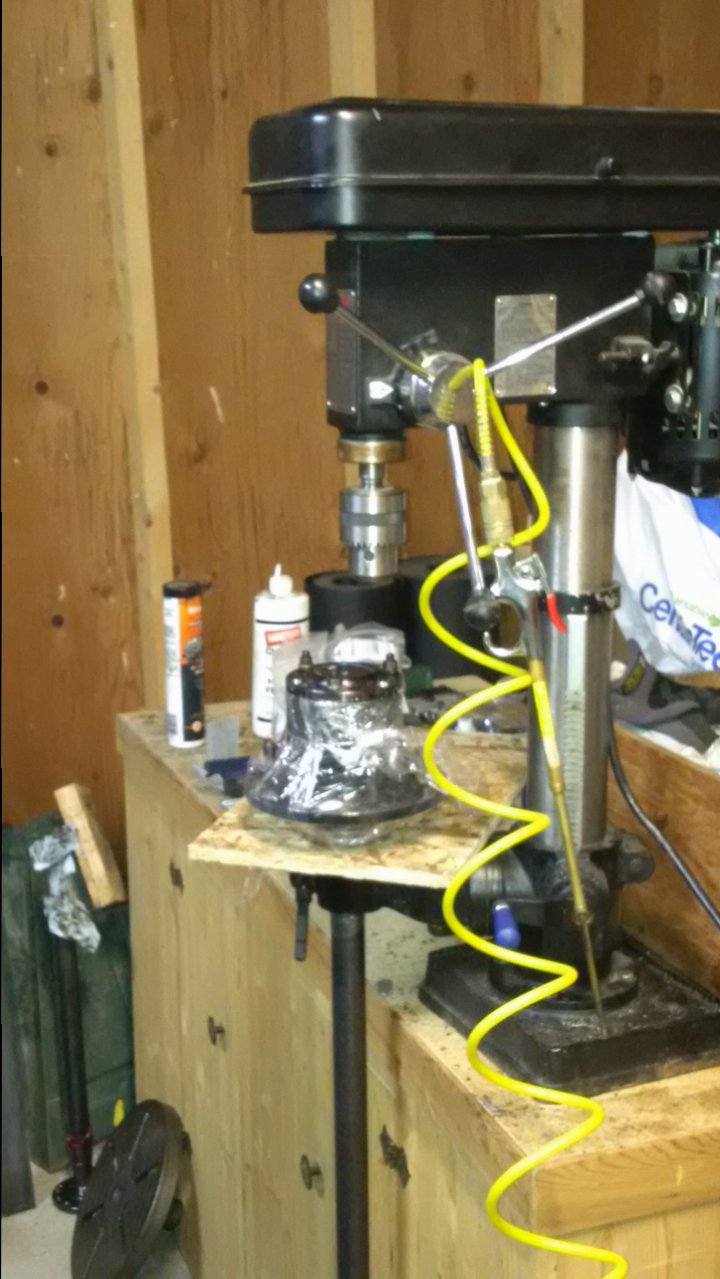 The front axle seems to have fallen away overnight. Hopefully the spring hangers will fall off tonight. 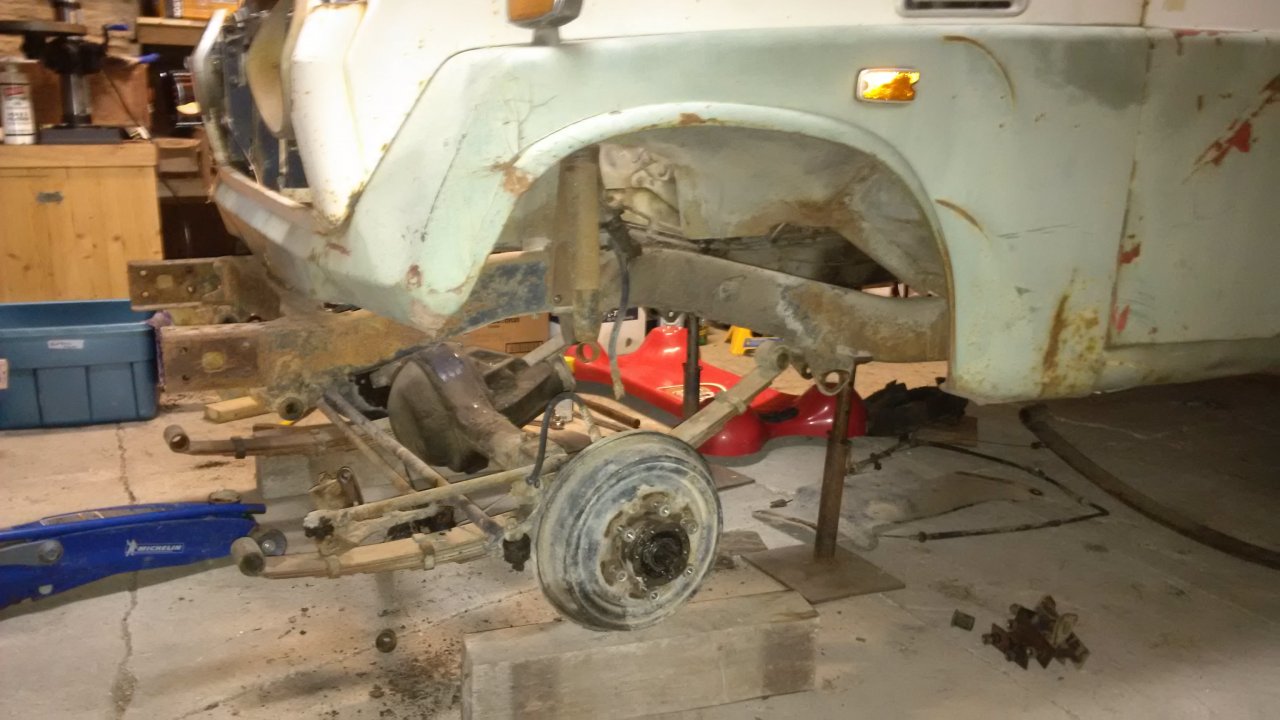 Will your wheels clear those new hex cap bolts? They look like the heads stick out past the outside of the hub. My full floater had the flanges welded to the hub and the little bit of weld outside of the diameter of the hub prevented the wheel from coming off. The PO was a genius.

The wheels go on fine. I haven't decided for sure whether or not I'll add the lock washers (with one side ground down as they will interfere) or thread lock the screws. Leaning towards thread locker. I believe the hub opening in the brake drums is tighter than on the wheels, so opening up the brakes may require removing the cap screws.

My full floater had the wheel studs welded to the hub on one side to correct for wallowed out stud holes. I was able to separate most of them with bare hands.

Curtis, tell about fj55's. I've always loved the look of them. Got a real hankering for this one. Called the owner tonight, he's out hunting but is going to email me a bunch of pictures.

Nice, ready to roll. Right color too (can you believe they made some in red? I mean really, who would want a red and white 55? :shomit: ) But would be nice with a 12HT and 5 speed in it.

I wonder if it has a Toyota or Chevy transmission in it? The SM420 is easy to adapt to the once piece transfer. Base of the front fenders in front of the doors is the common rust-through spot, rear corners as well I believe. Check the body mounts. The rear window mechanism commonly goes out due to a cracked/stripped nylon gear. Replacement brass gears have been made in small batches. I've got one that came with my 55, but I believe it is for a later mechanism than mine will have (not sure what the year cut off is, might be good for this one).... still haven't powered mine up to see if it works or is busted.

I picked up a rear window mechanism (1974) with the frame I picked up in Sask. Also the gauge cluster and dash control panel. You need any of that stuff Kurt?
Also, all of the steering gear

Hmm, I should put testing mine on the priority list and see what style is what, and if mine works. Steering stuff I don't need, as I'll be going 60 series PS to work with the 62 axle and move the steering box away from the 3FE exhaust manifold.

He sent me a pile of pics. It's got the Toyota transmission and axles. Surprisingly, the sheet metal looks really good everywhere (in the pics). Footwells under the floor mats etc. Body mount blocks are in nice shape. Way better than mine. I should really take care of those... He said the gearing is really low and you don't want to go over 90 on the pavement. I imagine it's a 4 speed as well?