Hey guys, so I recently replaced my power steering pump and it was fine for a while, but now is leaking like crazy out of a mystery hole. I'm trying to figure out what it is and what is missing. Hope someone can let me know what it is. THE PICTURE is taken from the bottom looking up and I'm pointing to the hole that is leaking with a silver rod.

Thanks in advance! Id go look at a new one but I'd have to order it first. 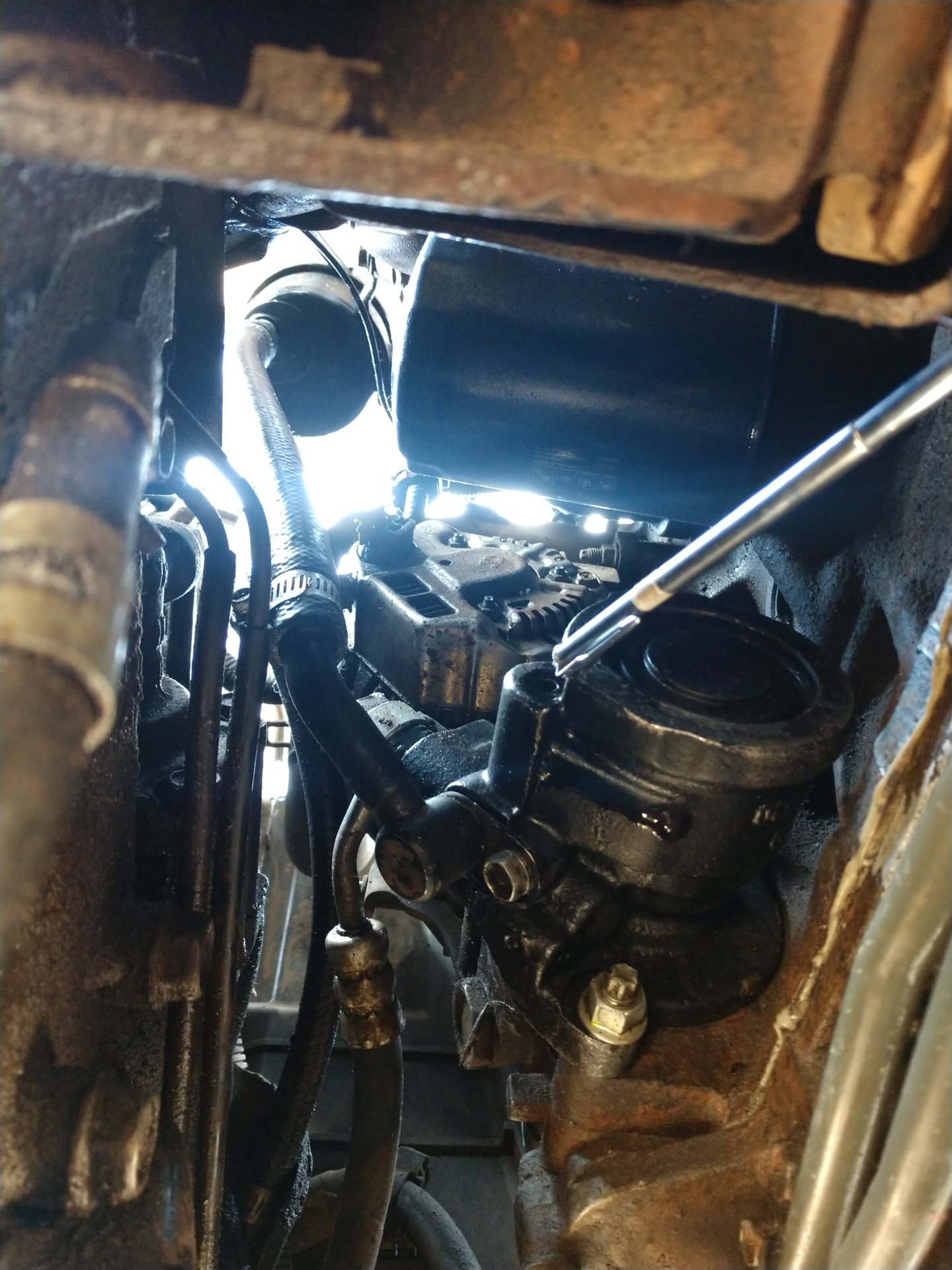 The mystery hole should have a plug in it. Reading here on Mud I think I've seen 2 different styles of plugs. Pressed in I believe. It's been covered you will just have to find it here in the haystack of threads on power steering pump leaks.

See last photo in this thread...

I wonder if you could tap that hole and seal it with a bolt and small crush washer or fipg the bolt in. might be worth a try if a new pump is in your future, you have nothing to loose.

I'd press a new plug in with a BFH and see what happens. The plug that was supposed to be in there closed off a cross drilled galley. If you didn't sieze the pump, you didn't hurt anything. Yet.

Any chance it is still under warranty? You may want to try a repair/rebuild kit for the original pump?
K

Ah! Thanks guys! That's exactly what's missing. So, this is a new pump since OCT, and I'm under the impression that these plugs aren't supposed to just fall out under normal driving conditions. It might still be under warranty...but I doubt it. I ordered another pump to see if I can match the plug and will just return it. The goal is to not have to reinstall the pump since it seems to still be working just fine outside of the leak.

These plugs are pressed in and occasionally blow out. There is an O-Ring around the plug to keep it sealed. Since you have recently replaced the pump, get a new pump under warranty. That's still a lot of work.

A friend had his plug blow out on a cold startup in his driveway. We tapped it back in, cleaned it all VERY well with brake cleaner, and filled the hole with JB Weld Epoxy. He has been running 4 months now with no leaks. Others have found a freeze plug that they were able to tap into the hole, then epoxy over it, and it worked for them.

If you thread it, you will likely have to remove the pump to do that, then tap in the plug, then cut threads BEHIND the plug (because the threads will cut the O-Ring on it), then install a bolt or pipe plug to retain it.
K

Thanks for everyones advice! So I ended up warranty-ing the pump...and got a replacement...this one still has that hole but doesn't seem to be leaking...yet. I'm wondering if the aftermarket pump I got just doesn't have that plug. If it starts leaking I'll report back. I got a (just in case) spare from a different company that is soooo much better quality, but at this point I don't have it in me to replace the current one. If the current one doesn't leak for a month, I'll probably return the spare because it was super pricy.
You must log in or register to reply here.

power steering service which fluid to refill with