Ah yes, the middle name! I was waiting until I had a chance to look my daughter in the eyes and say WTF? For a girl with an IQ of 147 I still swear there’s some blond in there or something. Are you ready? 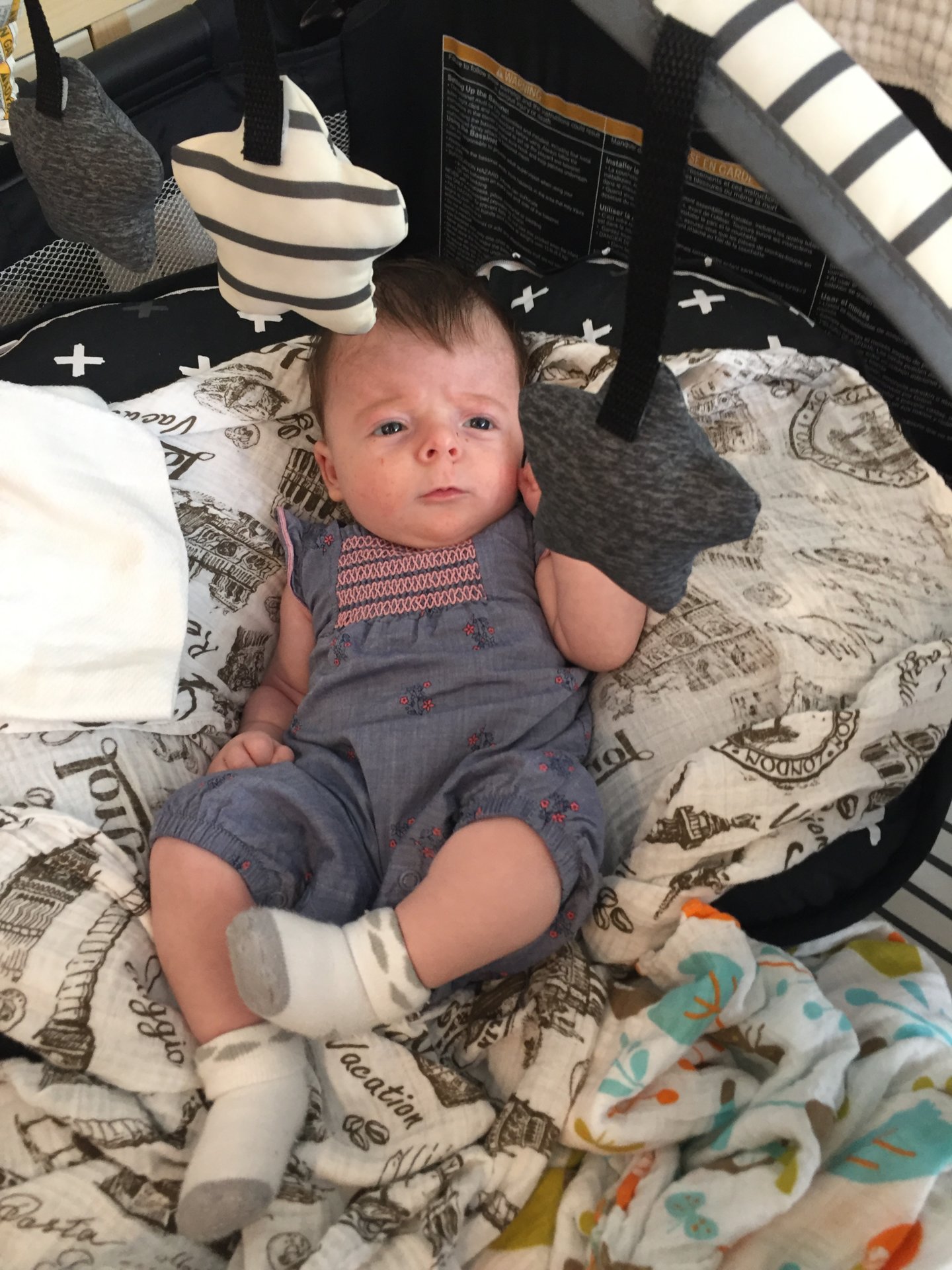 Gotta admit it is a cute name. 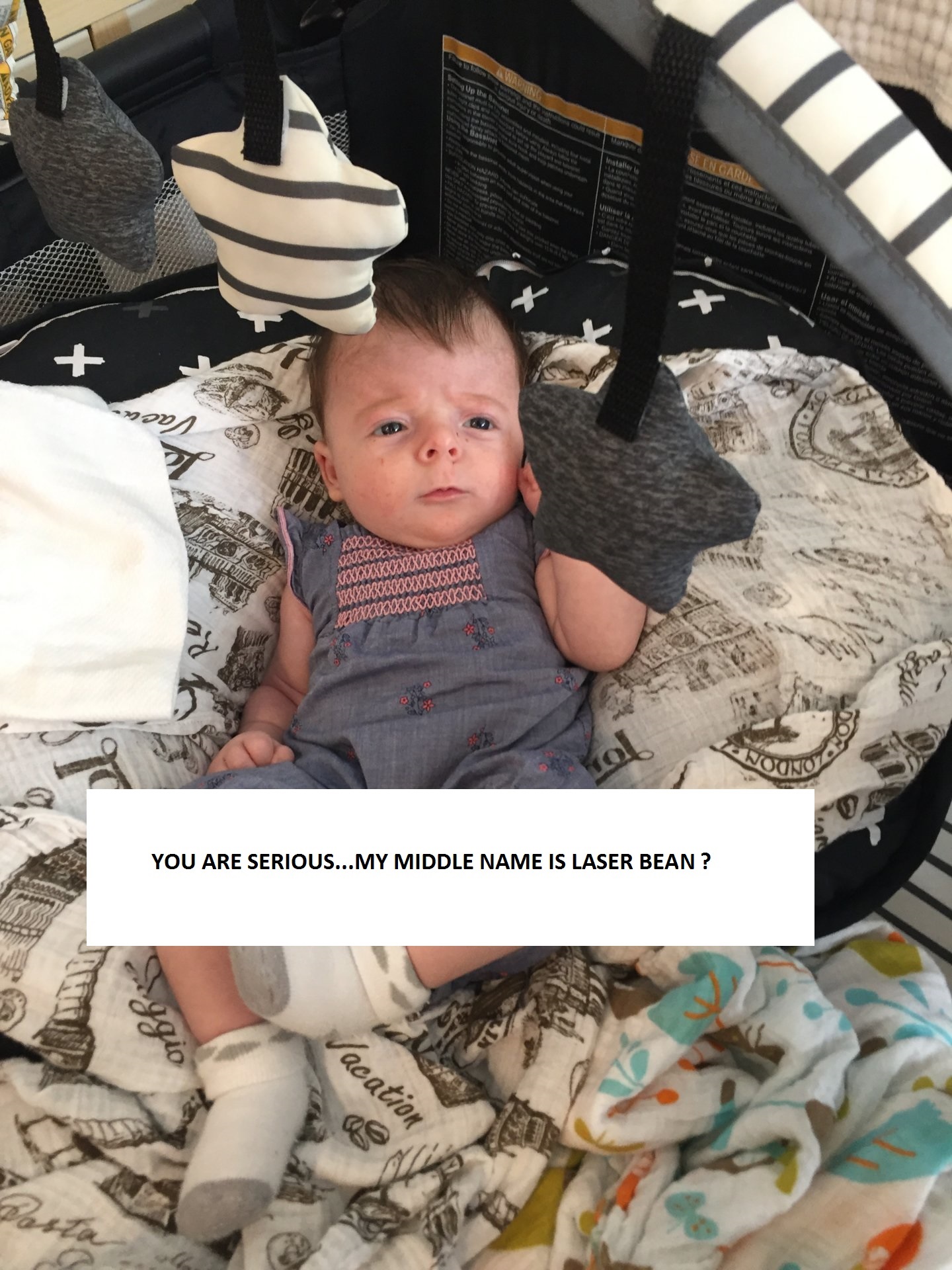 A beautiful child, with a very interesting & individual name.

It reminds me that a couple of months ago I watched a documentary on a 60s icon named Wavy Gravy. It seems Wavy and his wife named their son some equally unusual name. It was in the course of the documentary that I learned the son could and did petition the court to change his name when he was 14.

This is now duly noted in my memory banks.

I work with a woman who named her first born, 'First' (boy) and Second child, (girl), 'Second', born a couple years apart. Really. Both the kids are adults now and insist on being called by their normal-ish middle names after a lot of schoolyard taunting being called number 1 and number 2 with strongly implied scatological reference. At the time, we tried to tell her, but the wine-moms thought it was edgy ....

I predict she will affectionately be referred to as "L.B."

Soooo, we recently celebrated 30 years of living in our 72 year old house. And for most f them, I’ve been dodging the major renovations, because they ALWAYS snowball. I rebuilt th kitchen from scratch in 2001, and while it was 90% done in three months, the last 10 percent has moved at a glacial rate. Still not 100% as of today. (99%)

For several years now I’ve been getting the shpeal about doing the main bathroom. I swapped the sink and toilet and put down a floor as a show of good faith back in about ‘92. But that old porcelain tub had long since gone through the end of its shiny layer. Not seeing cast iron yet, but certainly past it’s days.

When I built the new bathroom at the shop, which I absolutely love, I knew the clock was ticking. So I agreed to start in the spring. We dutifully went off to the local big box home improvement store to order a custom window, because something told me we should have that in hand before we started. Sure enough, they screwed up the order not once, not twice, but three times.

I made the call to do my friend Sam’s roof out in the desert while we were waiting for the window, which of course turned out to be a really good call, as April temps in Ridgecrest were already hitting 3 digits. When we finally got the window, we were only six weeks out from my big road trip, and Tina didn’t want me to leave with the bathroom unfinished. So we put it off. Then I had to coordinate schedules with @tequila4x4, who is no longer doing plumbing as a full time job. So with today set for the production, I went under the house Wednesday to start the process by disconnecting the tub for the demo guys coming Thursday to drop the walls and take out the tub.

Tina had been complaining for a couple of days that she thought an animal had died under the house again (it’s happened twice before). Instead, while I’m down there disconnecting my rubber boot from the bathroom waste pipe, she turns on the sink in the kitchen and I hear something unusual. I aim my headlamp in that direction and see A POOL OF WATER UNDER MY HOUSE!!!

Providence. It turns out that the waste line that runs from the kitchen to the bathroom was in much worse shape than the tub. I could see five heavily corroded points along the pipe, along with the one that had probably started leaking two weeks ago.

A picture for posterity: 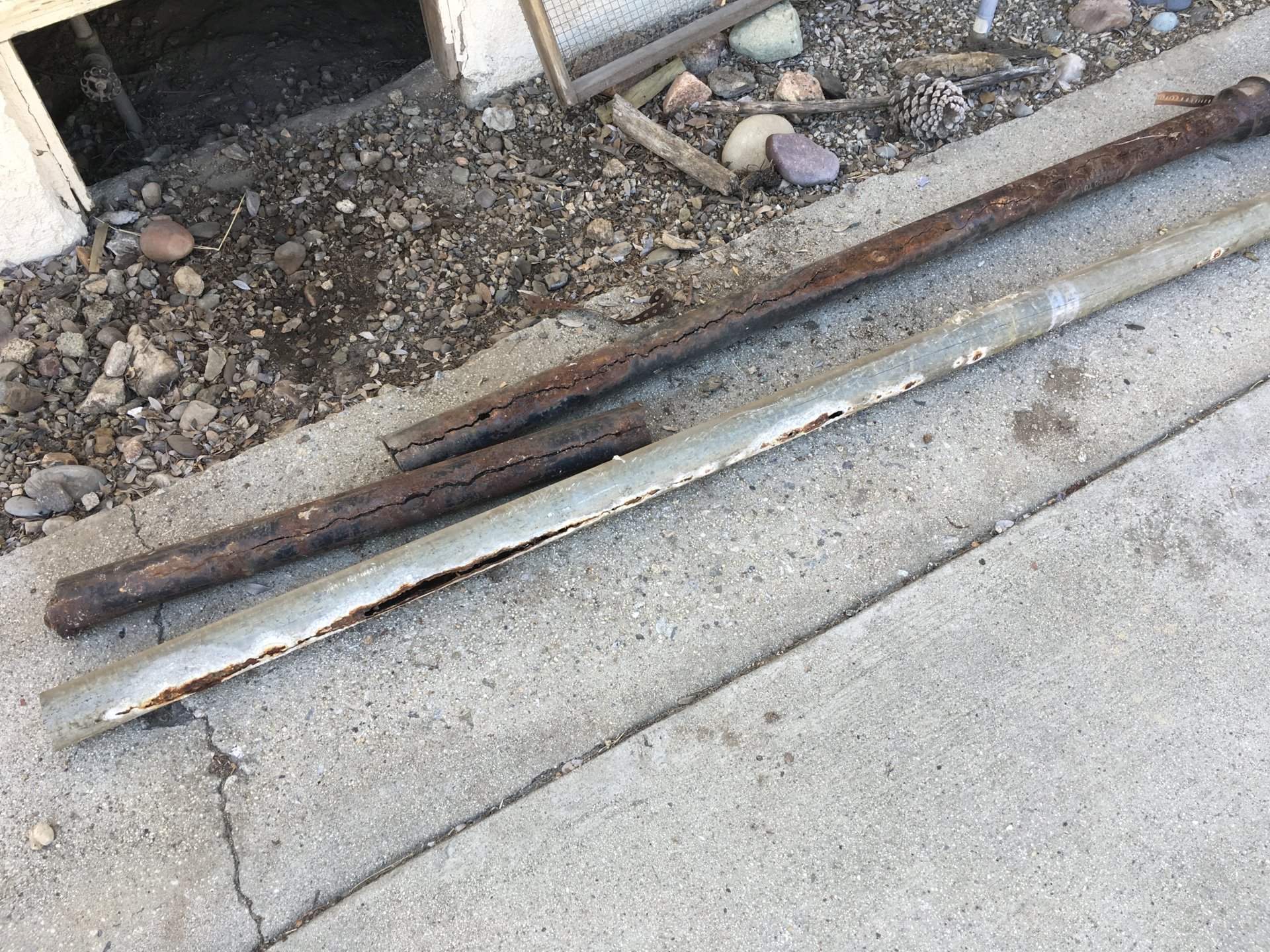 This is what the room looked like Thursday afternoon 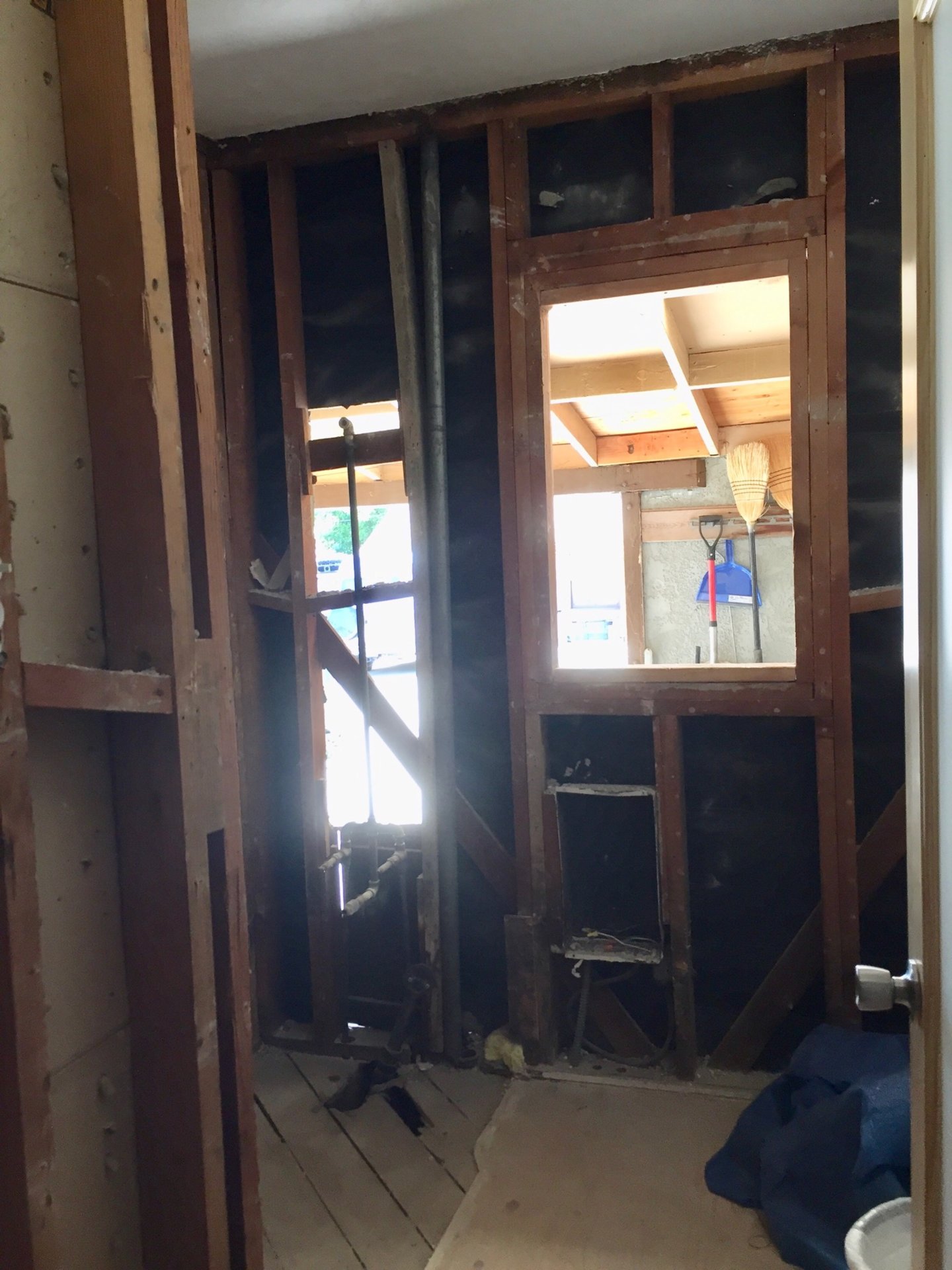 When I had gone under the house to boot the bathtub drainpipe over a decade ago, I noted that for some strange, twisted (to my mind) reason I had FIVE DIFFERENT CONDUITS going up inside the wall BEHIND THE BATHTUB!!!! Not the brightest idea IMO.

So with the tub and tile removed, I finally got my answer: 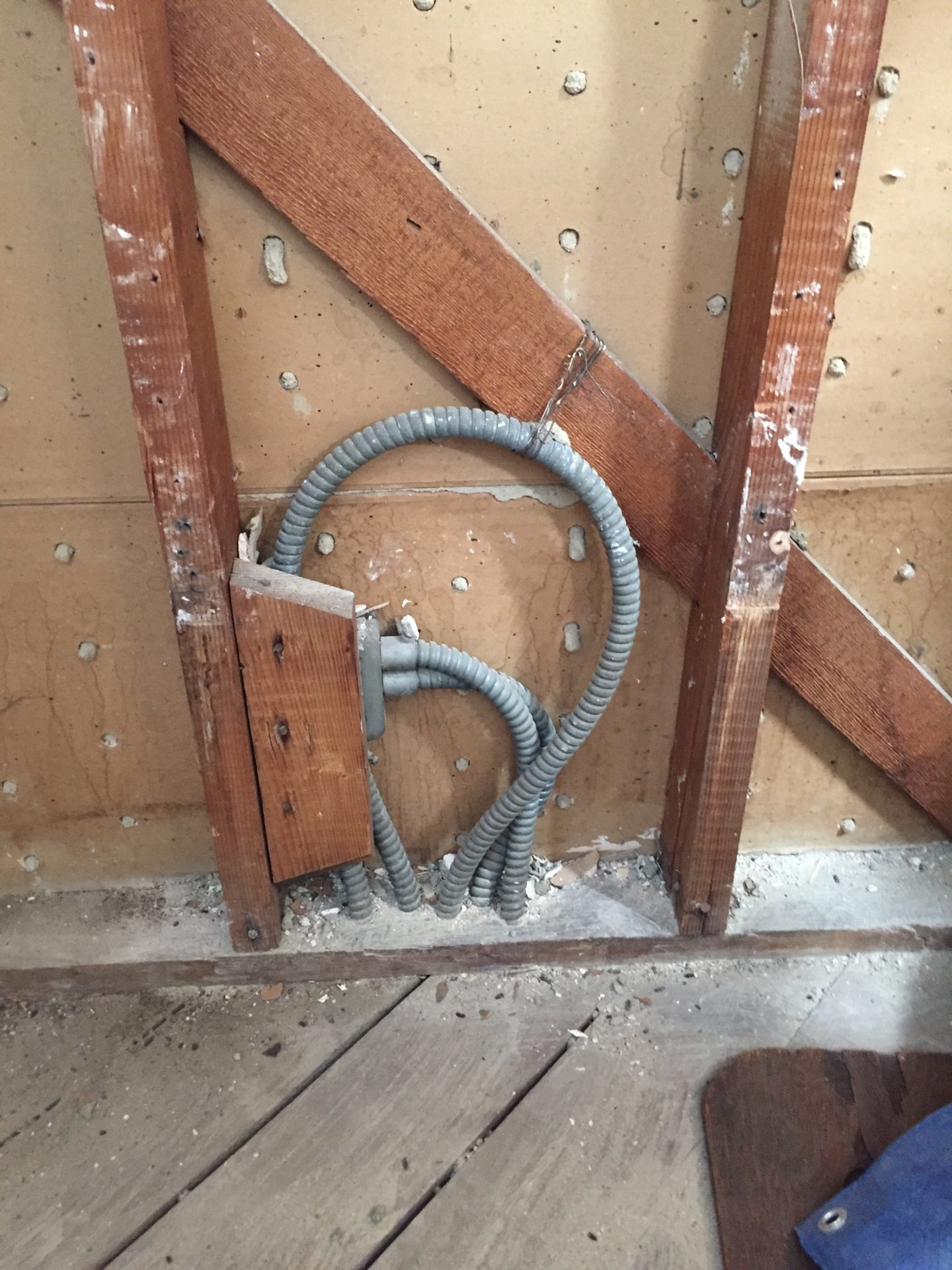 Friends have varying opinions as to whether this is code legal, but everything about it says OEM to me. Nonetheless, it makes me uncomfortable.

So I decided that with the two day window of opportunity before the new tub goes in I would put a junction box under the office (where the receptacle faces) and pull all that conduit under the house.

I came home last night and sawed open an access hole in the floor (discovered during the office remodel that this is an UBER COOL convenience) At 7am with no fanfare I cut power to the office and opened up the box. A minute later I had this tingling feeling!!! that there was more than one circuit going into that box. Yup.

Second circuit discovered and shut off. Time to get to work. Not less than 30 trips up and down under the house to undo the conduits one by one and hook them up to the new box. BUT, and this is a mark of satisfaction, I DID NOT HAVE TO MAKE A TRIP TO THE HARDWARE STORE! Four hours later, it was time to turn the power back on and sit back with a frosty beverage...and some Ibuprofen.
Last edited: Sep 14, 2019 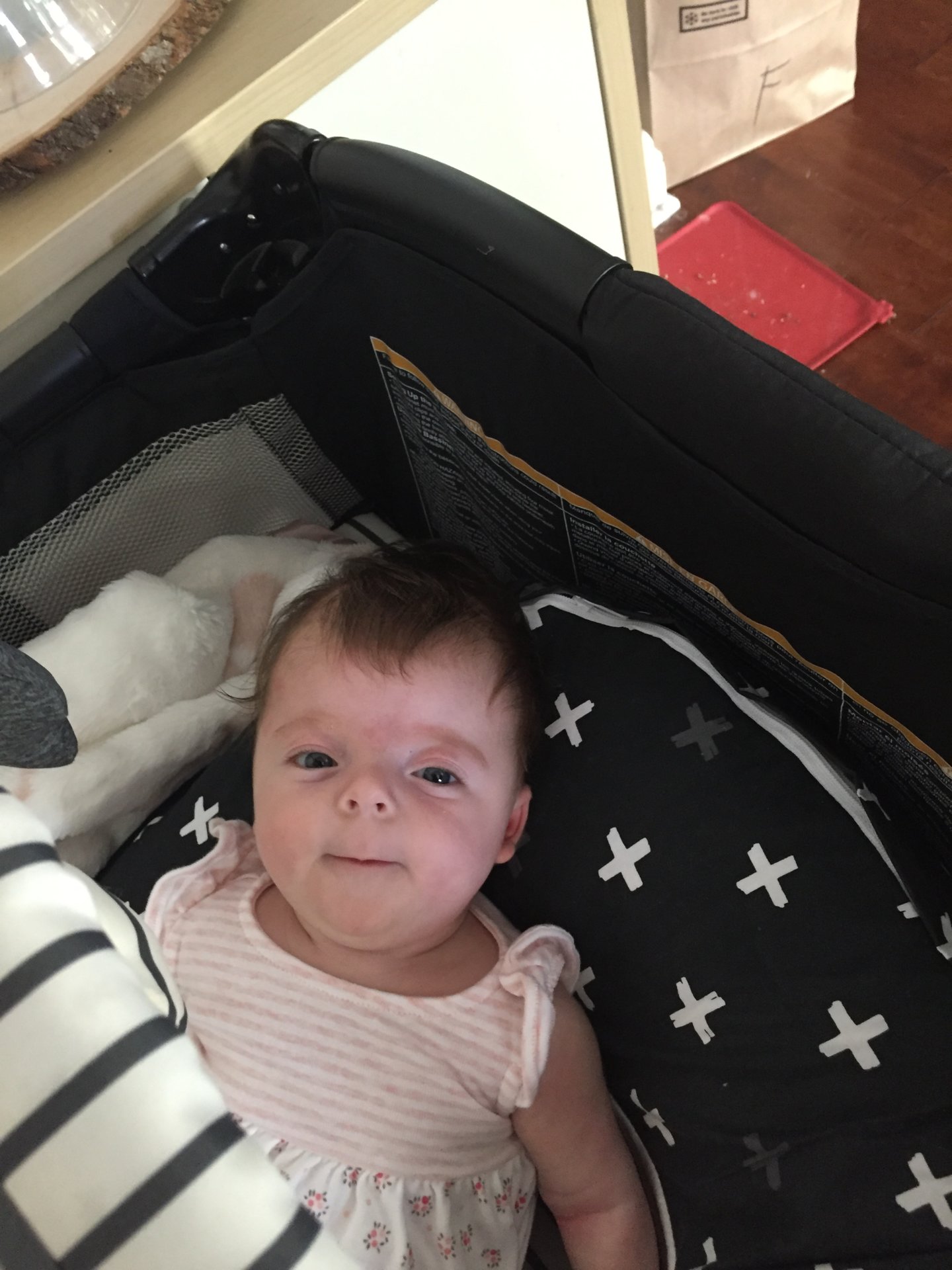 @tequila4x4 , the pipes are ready for your magic 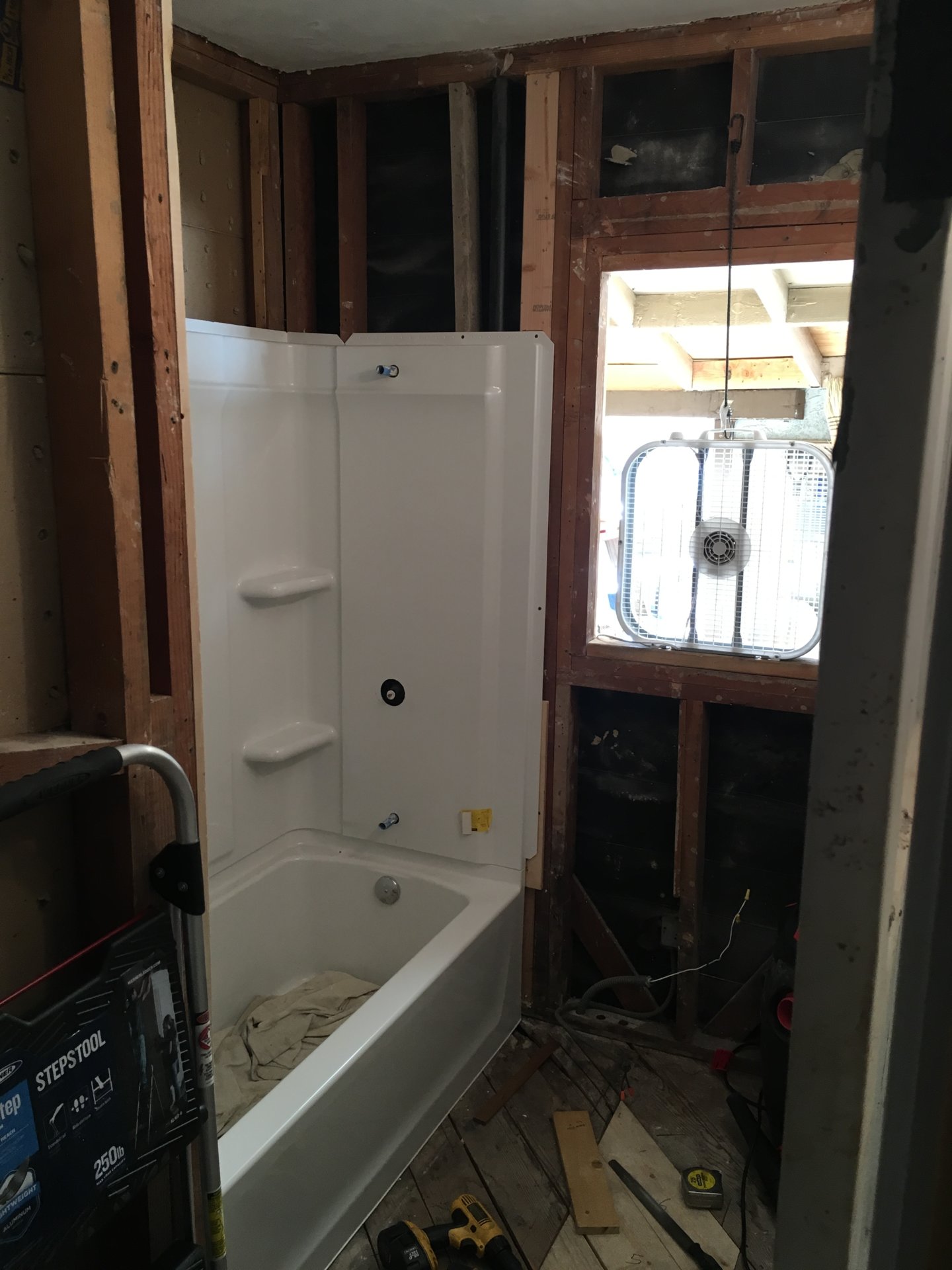 Oscar came and went a week ago, and I’ve been moving right along, albeit a little slower as I gave myself a minor hernia a week ago Friday.
Tied a new flex line in to a GFI box for a possible future jacuzzi, then started shimming out the studs on two walls to take care of framing irregularities that were covered over by the original button board plaster. Then on to sheetrock.

Today I went under the house for the last time on this project and covered the part of the subfloor that was exposed for the new tub drain. Then I anchored my replacement boards in the subfloor and sheeted it with 1/2” ACX. Then some quickset plaster to rough in before taping. Probably put in 7 hours over the course of the day. 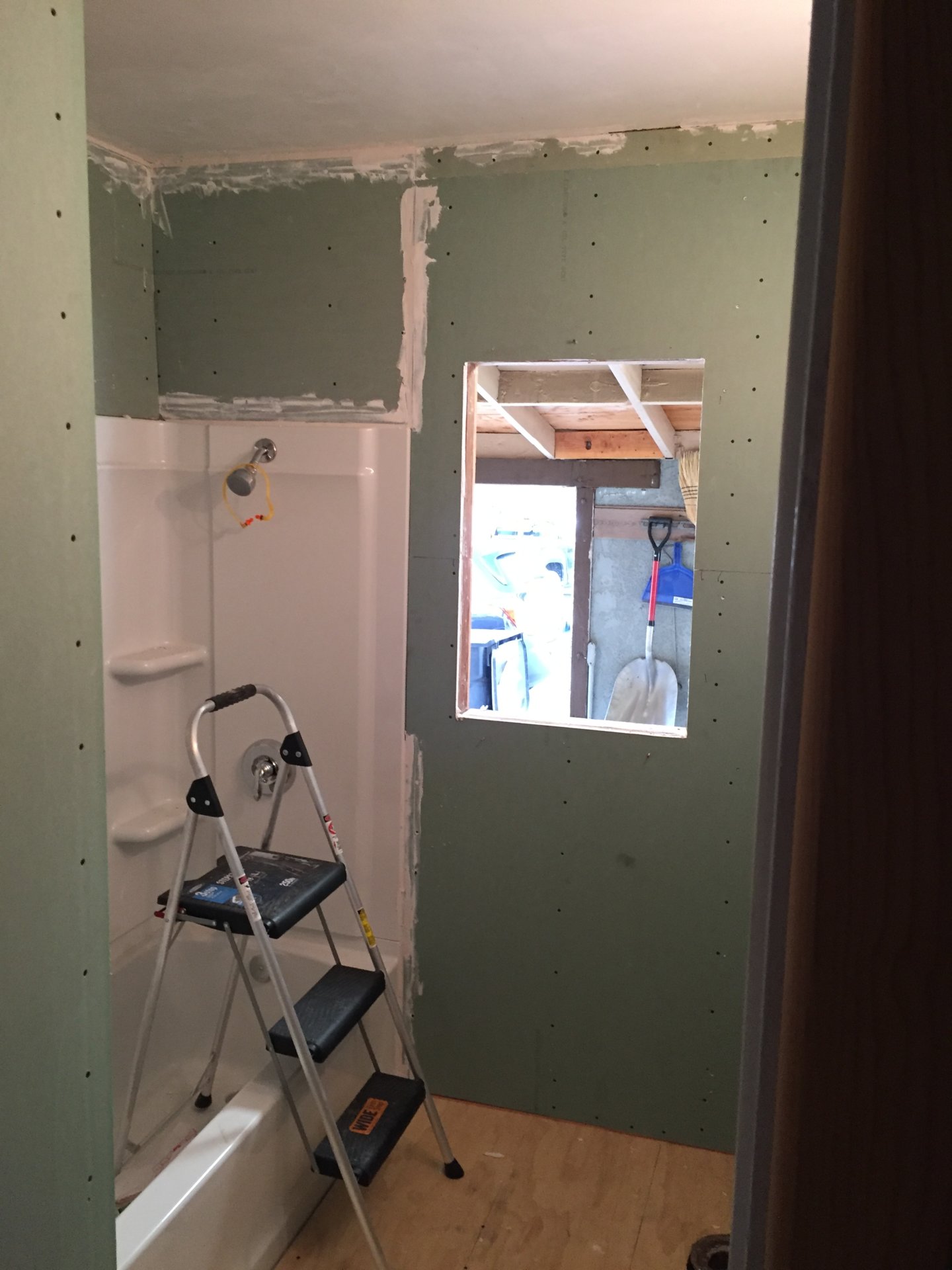 Dimers said:
Some of us are just sadistic and just like to watch a man busier than a one legged cat in a sandbox working his ass off. We can’t help it.
Click to expand...

Well, you certainly won’t get too much of a ‘fix’ from the frequency of my posts! But there’s always a lot of activity behind the scenes. I’m 58 and live by the motto that if you rest, you rust.

I’m currently putting in an hour a day on the bathroom, just knocking down the runs and building up seams. I should be able to start sanding next week. 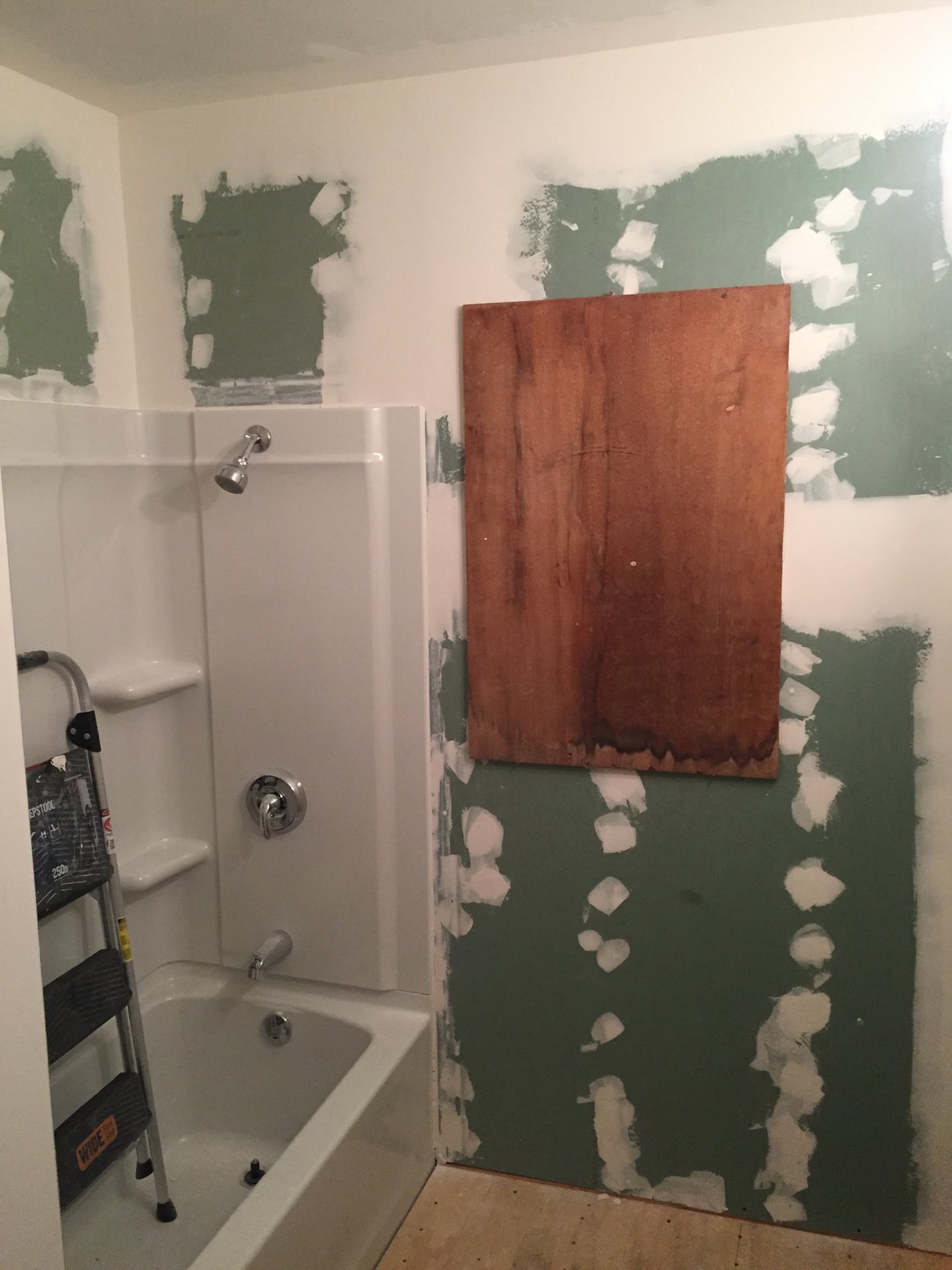 ^^ This is interesting, and no doubt true. I'll be mulling it over for a while, I'm sure.

Sidebar: A while back, I found something like this in one of Mark's posts: "How you do anything is how you do everything." This simple phrase has come back to me time after time. I'd even say it haunts me. It has caused me to examine my ways and study my behavior. Or should I say search my soul.
Last edited: Oct 10, 2019

Rigger said:
^^ This is interesting, and no doubt true. I'll be mulling it over for a while, I'm sure.

Sidebar: A while back, I found something like this in one of Mark's posts: "How you do anything is how you do everything." This simple phrase has come back to me time after time. I'd even say it haunts me. It has caused me to examine my ways and study my behavior. Or should I say search my soul.
Click to expand... 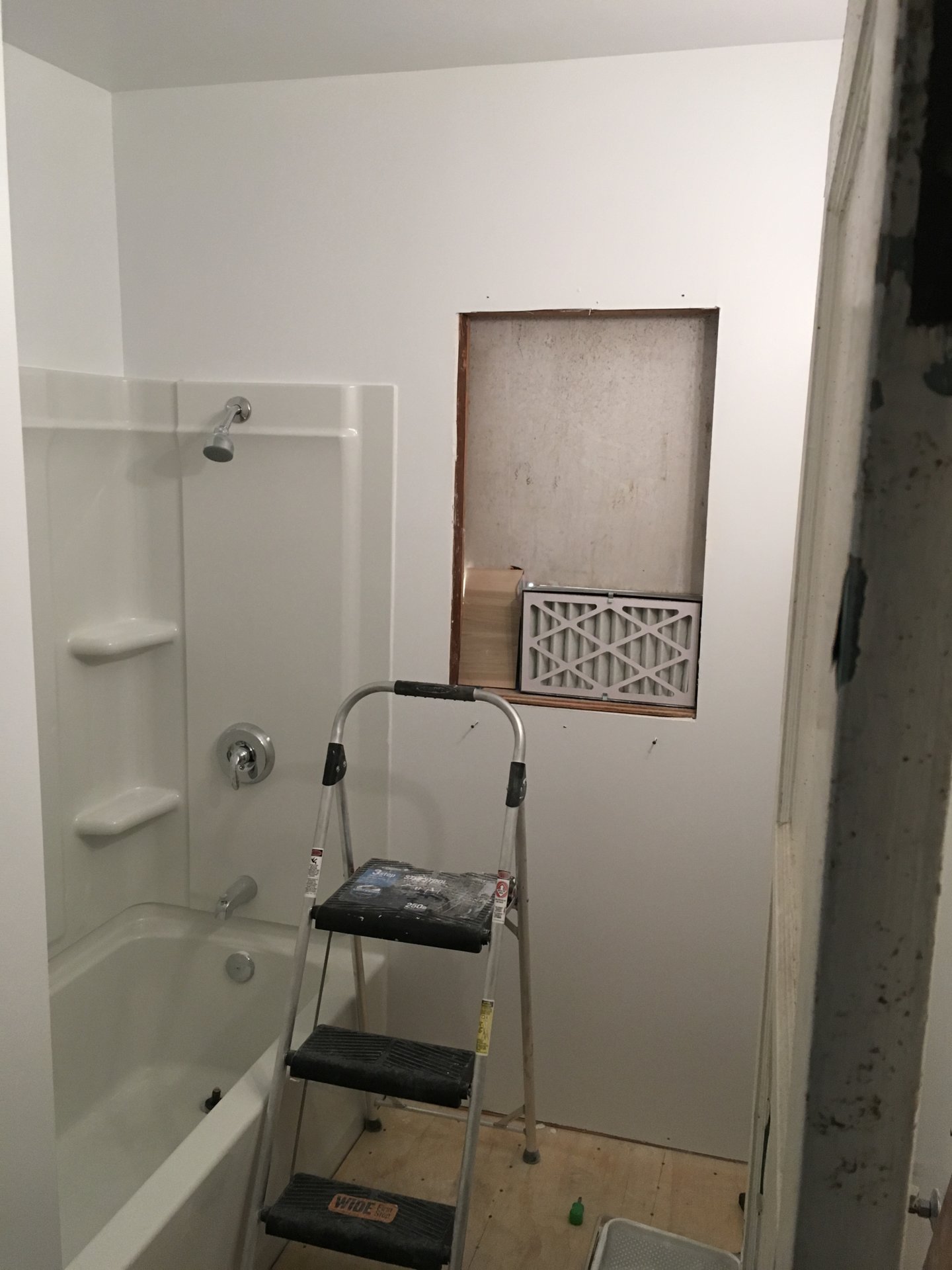 Bought a dust collecting fan. Seems to work pretty well. I put on a hunter hi-viz orange knit cap on the biggest day of sanding. No discoloration. Beard no whiter than before. Wife said it was $140 on Amazon. I don’t know; I don’t pay the bills; just make the money. 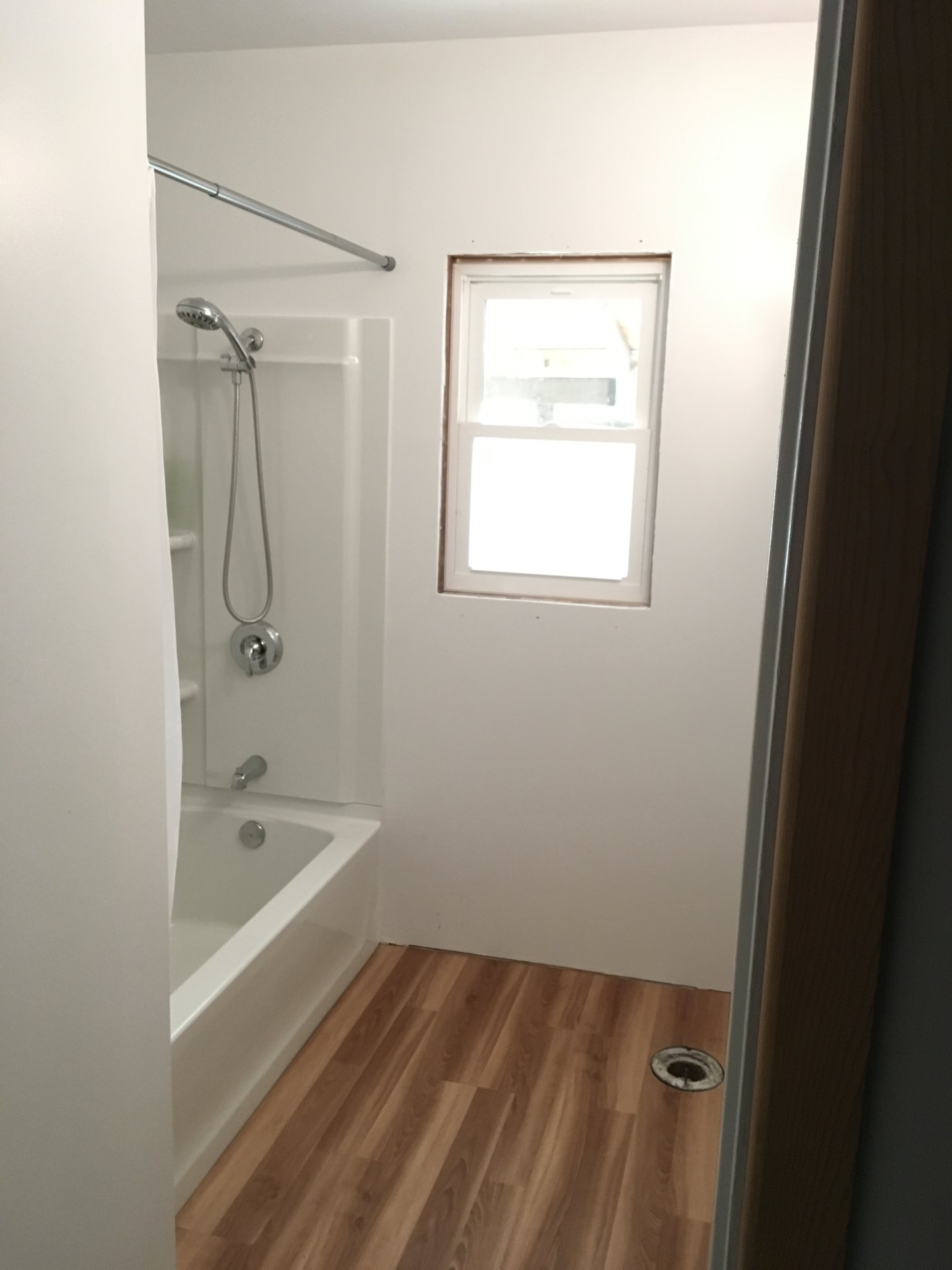