My FJ62 has 315k miles on what I believe is the original tranmission (not entirely sure, though). A few thousand miles ago I did a very thorough flush, added a cooler and temp gauge. I'm fairly certain my lockup is not engaging, as trans temp gradually climbs when cruising on the highway at 70+mph. Otherwise the trans seems to work well.

Any suggestions on getting the T/C lockup working again that don't involve replacement?

When you reach speed and let off the gas a little, do you see the RPM's go down 300? If you don't then you need a new torque converter.
M

Not sure I fully understand basis for the question, but taken at face value, yes, the engine speed drops a couple/few hundred rpm when I let off the throttle at highway speeds. So let's say I'm at 2500rpm cruising at constant speed - if I give more throttle to accelerate, I get to maybe 2600-2700rpm with no change in speed, and if I fully let off the throttle, it drops to maybe 2200rpm. I'd have to double check those numbers, but I spent an hour staring at the tach yesterday on my drive home.

From what I've read, lockup should engage around 2200rpm in 4th gear. I monitored pretty closely yesterday, and the TC never seemed to fully lock up (I tried many things, including accelerating from 3rd gear up to 65mph with as little throttle as possible going downhill). When cold, it seemed like it almost locked the first time I got to speed (engine speed dropped from 2200 to 2100 as I gently accelerated with constant throttle position), after that, nothing. RPM varied with throttle position in 4th gear, at a range of speeds from 45mph up to about 80mph. Transmission temp gradually and steadily increased during 45 minutes of highway and interstate cruising (with an external cooler and cold ambient temps). Reached about 185F while moving, climbed to about 210 a moment after I came to a stop. It only reaches these temps after 30min of highway driving, around town it tends to stay below 180F. Temp sensor is on the hottest part of the circuit.

If it helps, I was a Toyota transmission calibration engineer in the past, so I am pretty tuned into what lockup operation *should* feel/sound/look like... but the hardware I worked on was much more modern than the A440F (2013-2015 model years).

Also, the reason I ask - if it's something like lockup piston having a bad seal inside the T/C or the clutch being fried, replacing it will fix the problem, but if it's something else (for example I read something about worn bushings possibly causing lockup to not work in A440F), I don't want to chase my tail with expensive and physically demanding repairs if they don't fix the problem the first time. For that level of work, I'd probably do a manual swap.

I would try driving on fairly level ground (get out of Manitou!) and you should be able to feel the torque converter lock up in 4th on flat-ish ground under moderate throttle, and see the RPMs drop. I-25 is a good enough place do this. IMO, heat alone is not enough to indicate lockup or non-lockup.

What tire size and diff gearing do you have? 210°F is pretty standard operating temp for these slush boxes. It sounds like your torque converter is locking up.
M

when getting up to speed, don't know exact MPH # but cruising along I can feel and see it lockup and drop the rpm 200-300
M

Okay, cracked open the repair manual, which shows the full shift schedule (AT16 or pg. 89). Based on this, my lockup is almost certainly not working. Why? Because this shift schedule indicates that lockup should on at any speed over 52mph, and shouldn't unlock until >85% throttle application, or when decelerating with zero throttle it should unlock at 50mph.

Therefore if my RPM changes with throttle at <85% throttle and >50mph, lockup is not working as intended. Also, on AT12 section (i), there is a note that confirms this. 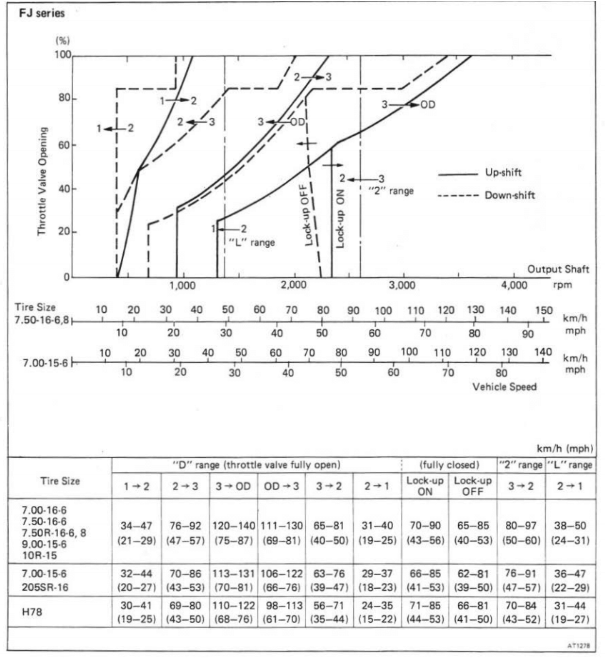 I swapped to full synthetic A/T fluid years back and it lowered my operating temperature a good 10-15°F. Fluid level is definitely a pain on these boxes.
M

If it stays in third it will heat up and on long drives ruin the transmission.
P

How did you go , any success?
This may not be relevent, but here is what fixed lockup problem in my a440f.
another a44Of issue
M