Other than rattle can painting an occasional wheel or set of sliders, or pushing out massive quarter panel dents on my 80 series, I have never actually done any proper body work that involves filling holes, sanding, priming, painting, etc.

I recently picked up a pretty nice 40 series ( Bought my first 40! 36k mi 1974 FST. ), and while it is in overall great condition, there were a few previous owner modifications that I am reversing. One of those was an addition by the PO of custom running boards. While the original 5 holes from the stock running boards were used, they also drilled a total of 4 extra per side into the lower rockers. Three of these are small (0.30") but the 4th is larger (0.45"). My plan is to weld those up, repaint the repair, and then mount a new set of OEM running boards that I just purchased.

Knowing that there are going to be several projects like this on the 40, I did buy a welder (Miller Multimatic 220) and have spent a few hours learning how to weld as I plan on doing all of the repairs myself. After "filling" plenty of various size practice holes in 16ga metal, I am ready to weld on the 40 but just wanted to make sure my proposed plan is mostly correct. I know there are probably a few ways to do it so any advise or input would be helpful.

When filling the practice holes, I used one of those magnetic copper spoons as a backing. The small 0.30" holes were pretty easy to evenly and completely fill in a single pass, while not putting too much heat into the metal. However, the 0.45" holes were definitely more challenging. While they could be done in a single pass and filled in thoroughly, this produced a lot of heat and caused the metal to warp. Several passes a few minutes apart seemed to prevent warping but required a bit more clean up, which also puts heat back into the metal. I did experiment drilling out the holes to 0.5" and welding in 1/2" 16ga metal discs/blanks. That seemed to work well so I may use that method for the larger holes but single pass method on the smaller ones. I was using Hobart ER70S-6 0.030 wire, but may go down to a 0.024 wire. With the Multimatic, I would simply select 16ga metal on the parameter screen but slightly dial down the voltage by 0.2 or so and slightly decrease wire feed speed. Using a 75% argon, 25% CO2mix at 18 CFM.

The paint on the 40 is probably a 6/10 (no rust but obvious cheap single stage respray) so my paint job doesn't have to be perfect. I don't plan on repainting an entire section of body, but instead just respraying the rocker and trying to blend the new paint slightly into the old. From what I have read, once the welding is done and cleaned up, the bare metal needs to be primed. It seems like most people in this section like epoxy primers, especially if you plan on painting next to existing paint. If I understand correctly, self etching primers can eat away at the old paint if there is any overspray. However, with an epoxy primer, you need to paint over that in a several day period, otherwise the epoxy completely dries and the final paint will not adhere.

So if using an epoxy primer on metal, the order would be;

1. clean metal with acetone, spay on epoxy primer
2. apply high build primer (high build 2k) and block sand to get level
3. wet sand with some 600 grit, clean again and then apply final paint
4. wet sand with 800 or 1000 grit if needed to clean up, then go through various cutting/polishing compounds with orbital polisher

Did I get this right? Also, when welding on the truck, obviously I want to get the ground clamp as close as possible to my work, but should I also disconnect the battery and possibly fuse panel?

Here is a shot one of the rocker panels: 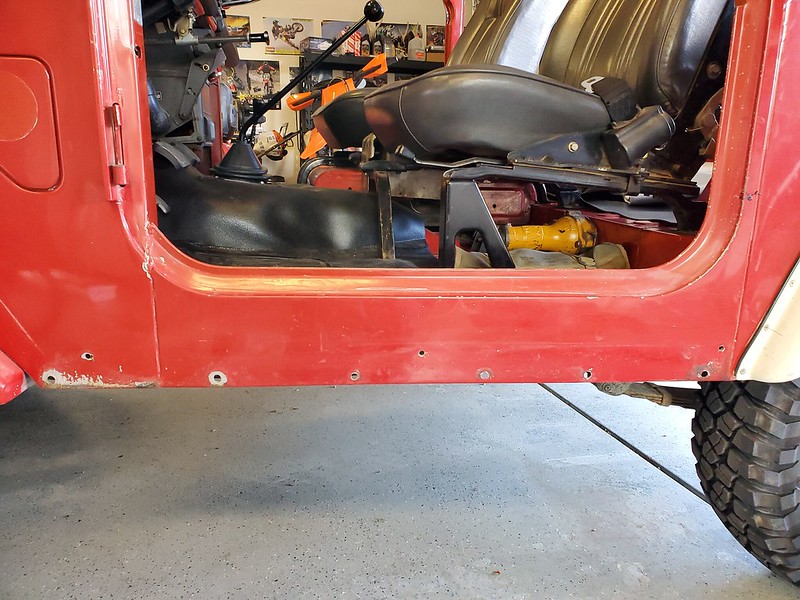 My experience, .023 wire. I use low power, high wire speed for sheet metal spot welding.
listen for that ‘buzz’ sound. I’ve never used a backing spoon.
A you’ve found out about warping you’ve got to jump around, let each spot cool
before you come back to it.
Always disconnect battery when welding on a live truck, at the very least negative
terminal but both is best. Fuses will be fine.
Once you’ve filled the holes, it will be really hard to drill through the welds so plan where
you want those repairs. I‘m a primitive painter, but epoxy primer is best. You can get high
fill primer to give you a bit to sand with. Buy yellow tape to tape off the area to prevent
overspray. If you are just doing low level repairs like this 600 grit would be as far as you need
to go I would think. When I Base Cleared my 60 after 400 hrs of work, I went with 800-1000
grit to finish off. Years later, I patch and spray over, but don’t bother with the wet sand
on the patches.

grind the paint off around the holes, weld in new discs and fill the holes. Agreed .023 and small spots working around then back in between the spot welds with more. Then skim it with filler/hardener and a squeegee. D/A it with 80, 120 etc to get the big stuff down, then dry sand with hand and block 120, 220, 320 grit. Before you prime it lightly spray with guide coat and lightly block sand it with something like Eastwood's dura-block that is in good shape and long enough to straddle the area. Then inspect for dark areas (signifying low spots). Continue going back over with filler and guide coat until its smooth and straight. Work the filler across the holes in large long stretches. Also sand with long strokes across several holes ...ie one big patch as opposed to a bunch of small holes patched and filled. The end product will be straight looking body work. If you turn the lights off and look down the side of the panel with a flash light you don't want to see wavy work or a bunch of hole patches. Then prime. I wouldn't bother with 2k for these few holes. 2k high build to me is for big panels and getting things smoothed out those large areas. Wet sand the primer with 400 grit. I wouldn't go past 600 ...too smooth means paint has nothing to bite into. Paper and tape off then wet sand the rocker. Blending paint is very hard. I'd just tape off a line. tack rag and wipe with wax and grease remover with a lint free cloth. Then base/clear. prob 2 coats of base and 3 of clear. Then wait about a week to 10 days before wet sanding and buffing the clear. I'd go 1000 to 1200 to 1500 working my way up but very light sanding. Followed by Meguires ultra cut buff.
Last edited: Feb 9, 2020

Thanks! All great advise! I plan on repainting with a single stage paint (single stage suits the 40 well) so that will save a few steps and some time. I also likely don't have the skills to shoot a nice clearcoat yet either.

Single stage is fine. Prob less expensive. A pint will cover that easy. And for primer you can get away with a decent spray can from your automotive paint dealer. If that's freeborn red ..a stock color, the color code should be on the vin tag (on the firewall?) and the paint dealer can use that code to match it up with his brand of paint.
F

Single stage paint is much cheaper. But still, thanks for sharing this, it definitely helps a lot for those who are preparing to paint or have a minor body work for their trucks. Keep it up, man!
You must log in or register to reply here.

How do you get paint to stick to metal parts?
2

Top coat for back of new panels?