Drove to work the next morning, and at the first stoplight, White Sheep got a bad idle and running rough. Got to work, looked at a few things but did not know what was wrong. Still rough, idle the next day. Aired down, parked in the garage, and pulled parts off the shelf (New wires, plugs, vacuum hoses, MAF, injectors. . .) 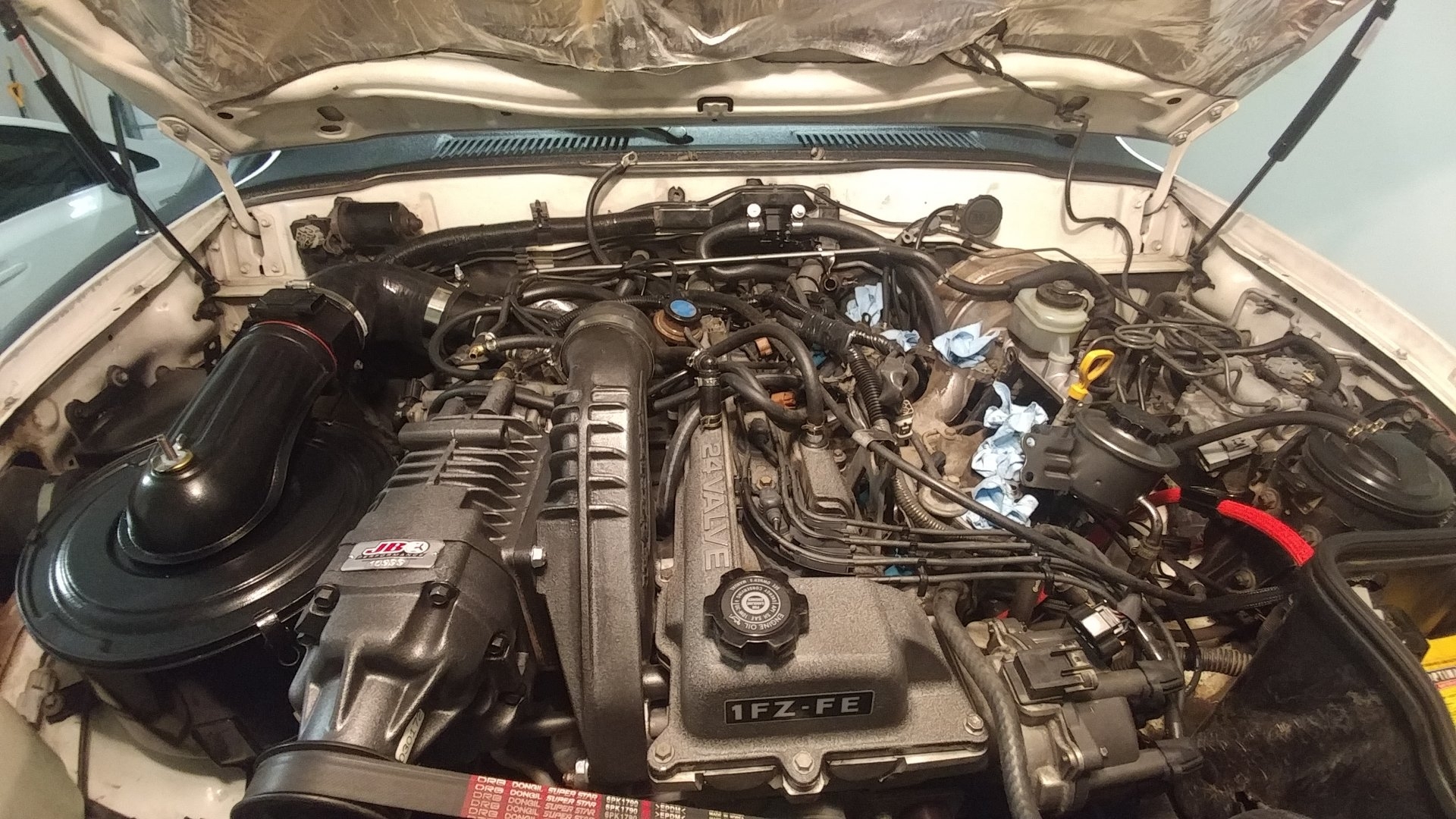 Fired her up and she ROARED Strongly!!, but once put into gear it was the same old song and dance. Drove to @fourtrax house to run some tests. Wiring harness, fuel module, coil, all good. Front O2’s ohm was out of tolerance. Ran a compression test. . (1) 185, (2-4) 150, (5-6) 50. Pulled the valve cover and the intake/exhaust valve clearance is out of tolerance. 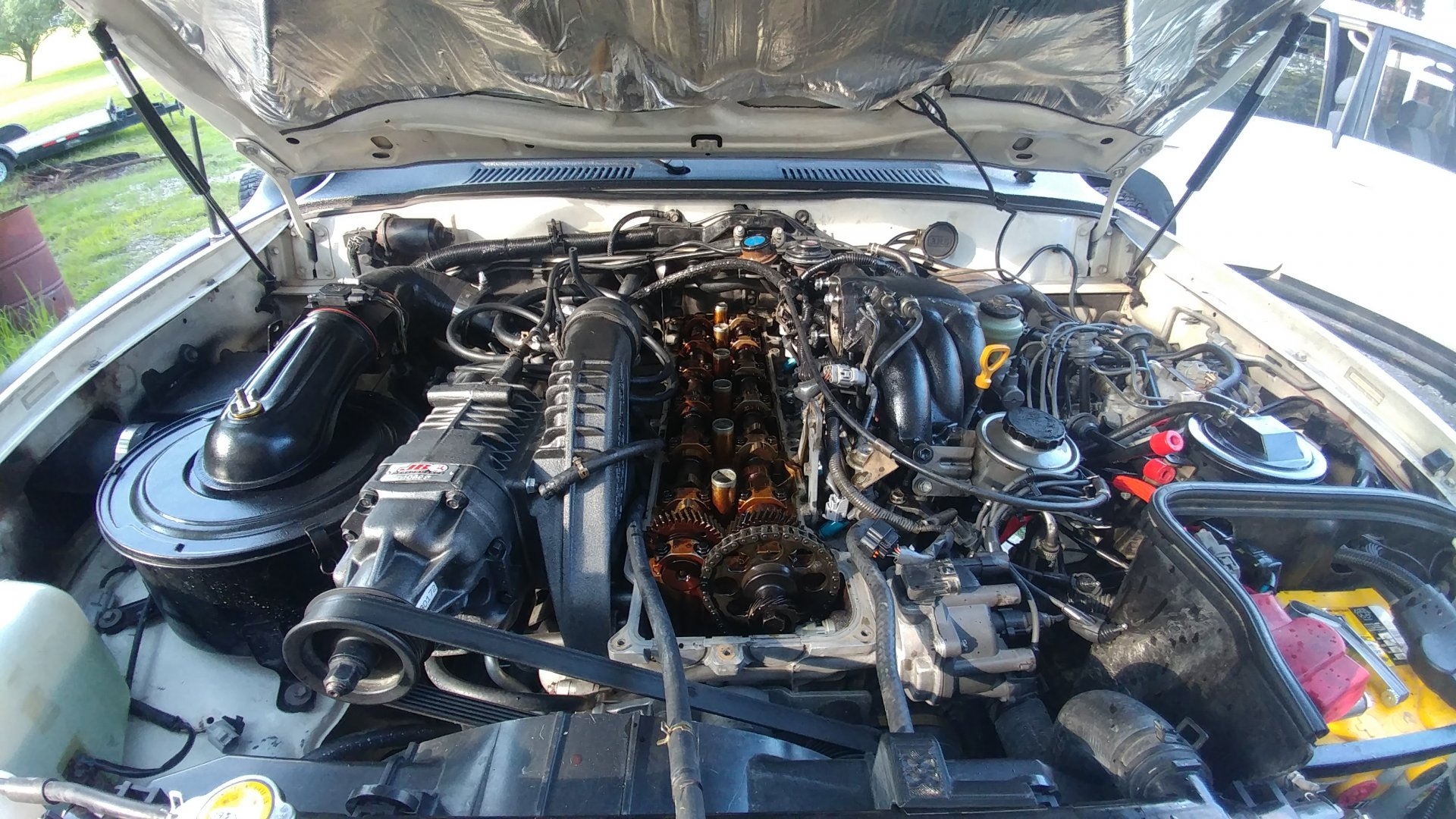 I’ve always thought about a build thread, but it would have been cosmetics because of everything I’ve already done. So I guess it's time to start one.

White Sheep had a good run. Here are a few of her memories.

I purchased here in the summer of 2018 in Tajikistan for $4K. I was serving there as a US Diplomat. She is originally from the US but has been overseas for several years in the Diplomatic circuit. 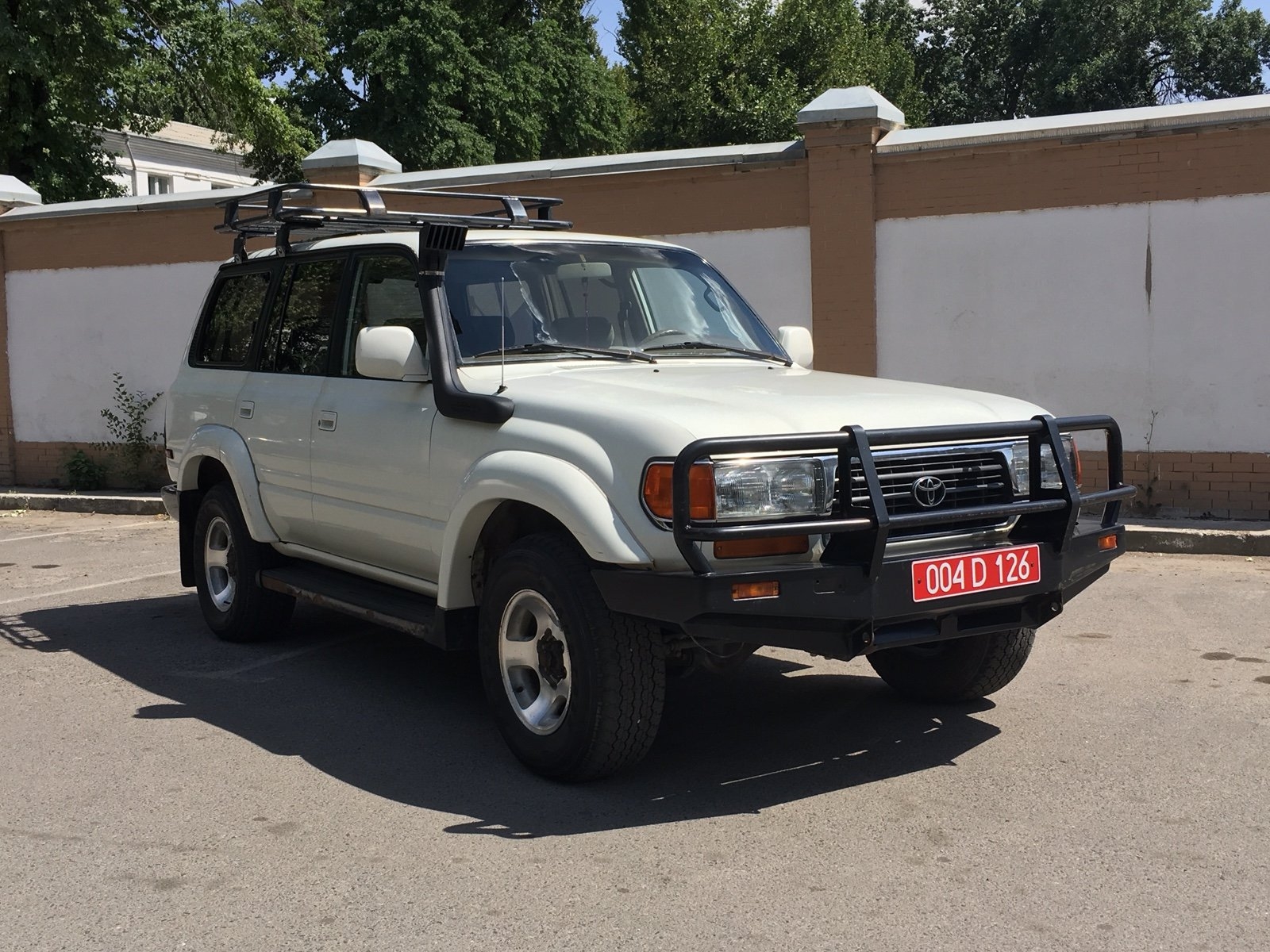 I had to wait two weeks for the registration to be complete, so I got here pained matte white and tinted.

Time went by and people kept putting their greasy fingers all over it. While I was in Kazakhstan, I saw a white SUV with textured paint but I didn’t know what the paint was. Asked the painter and he said Plasti-Dip. So we took the flares off, de-fringed the tailgate and Plasti-Dip’d it matte white. 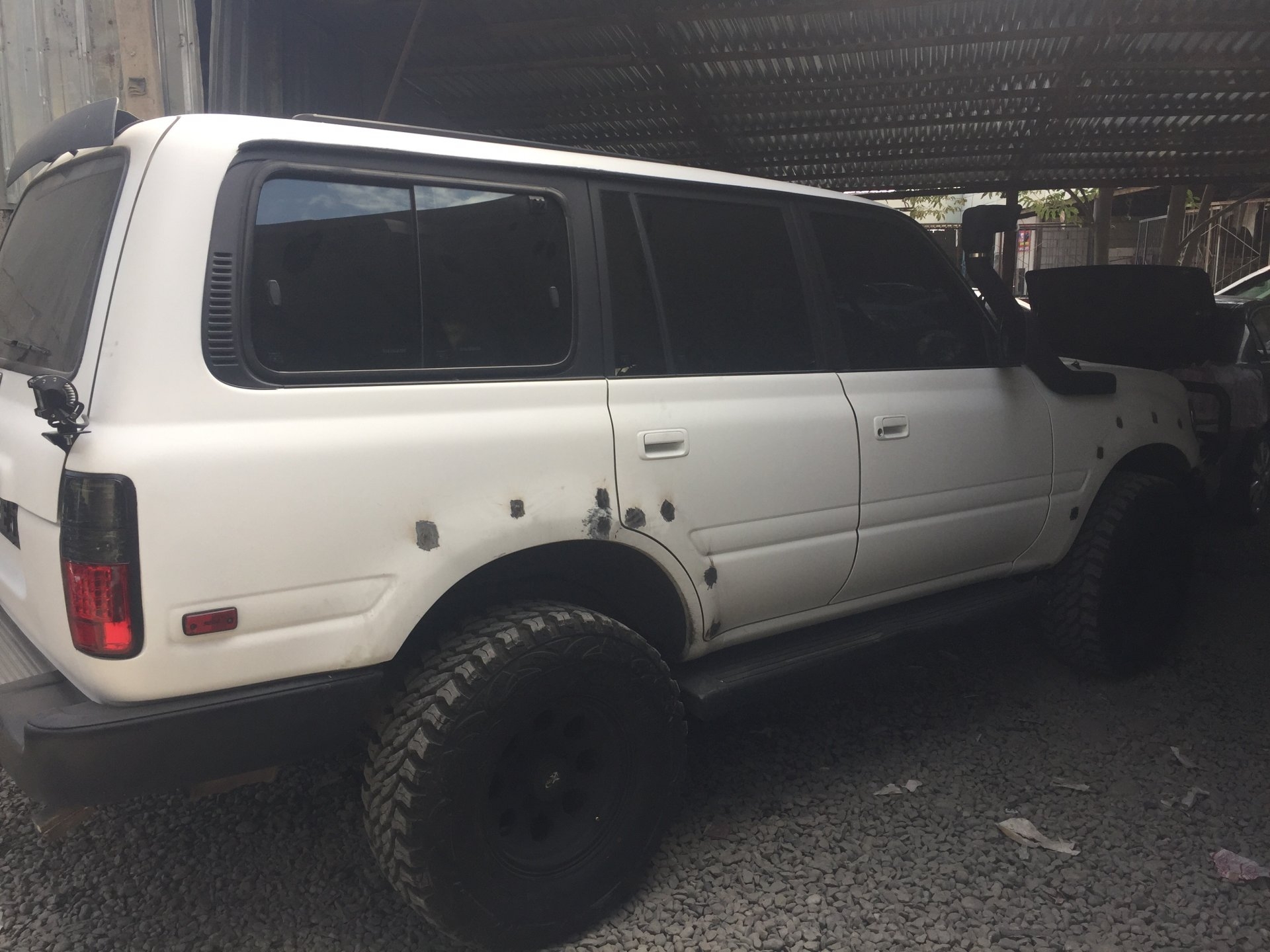 Had a great time in Tajikistan. Because pretty popular being one or three black guys there. A local gym invited me to go repelling with them. This chick is pretty badass. She taught me how to repel in 5 mins. 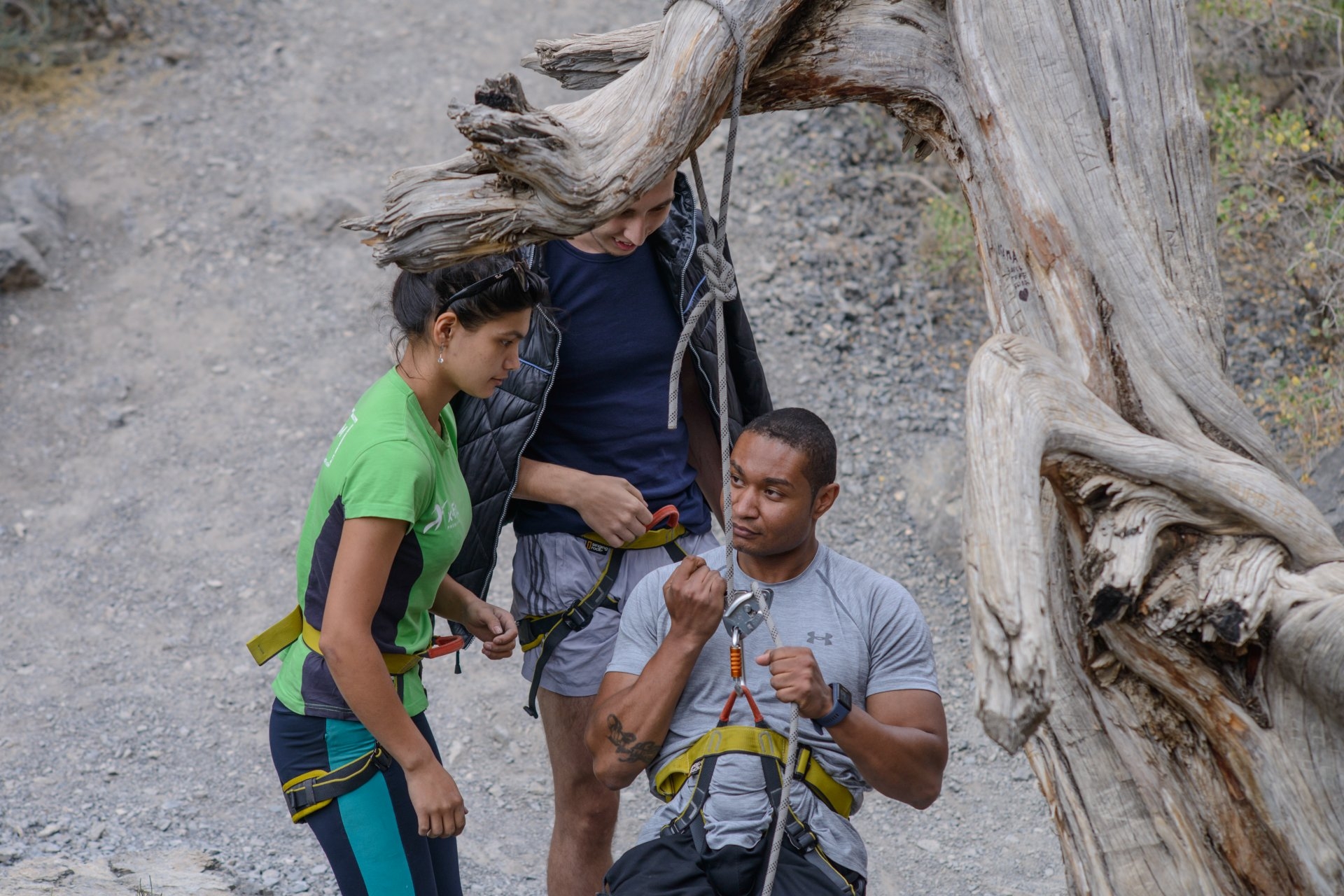 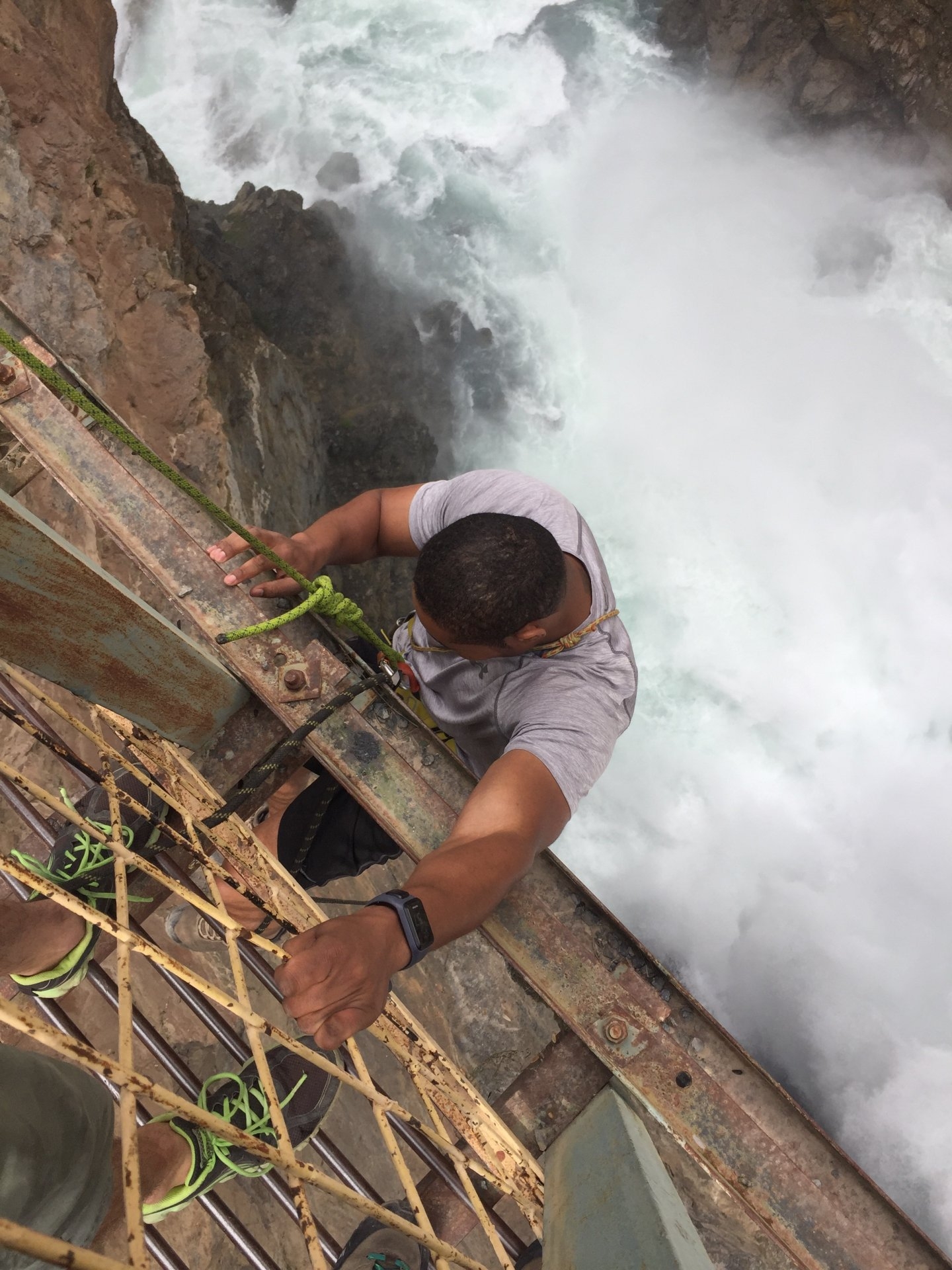 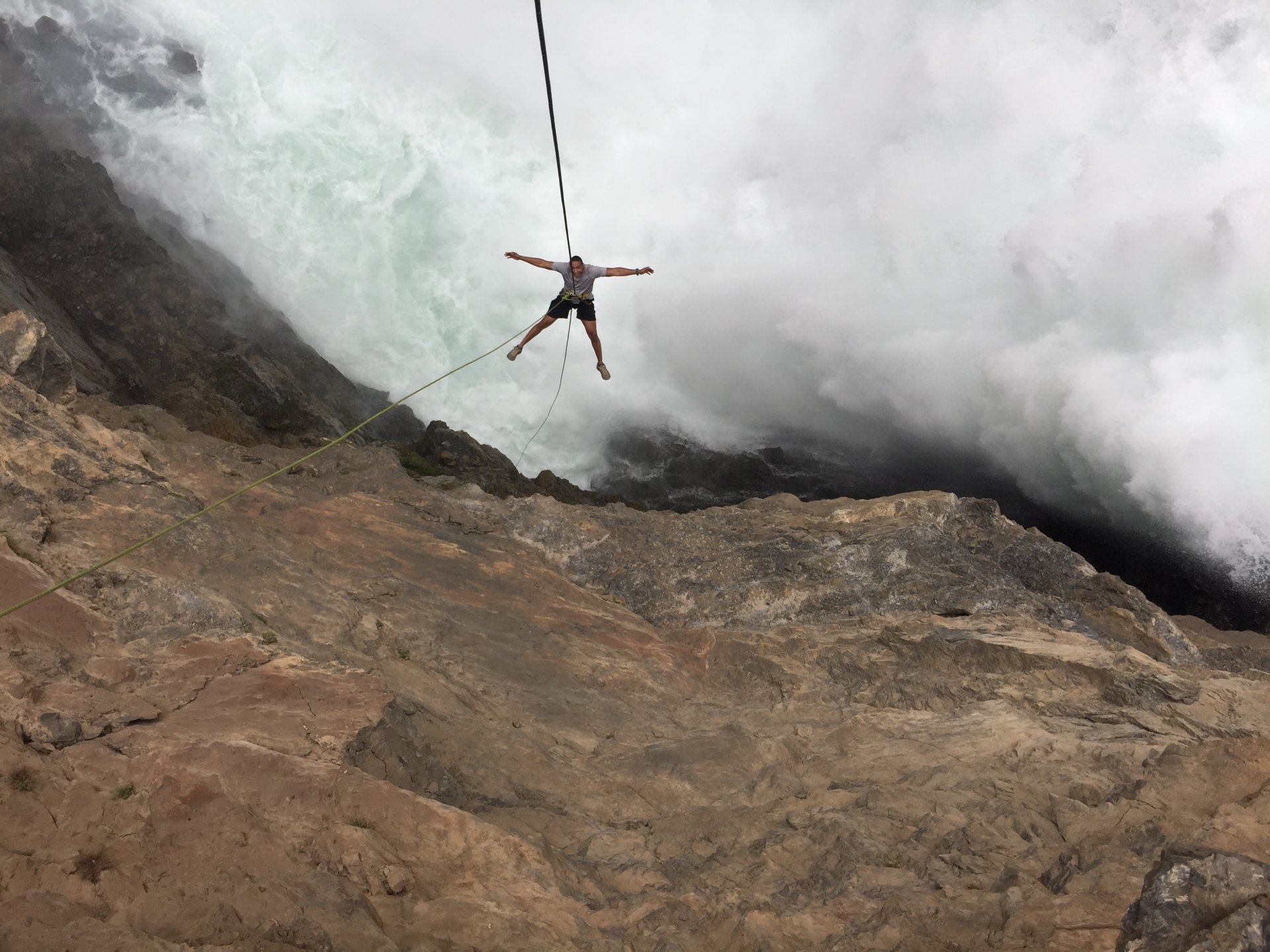 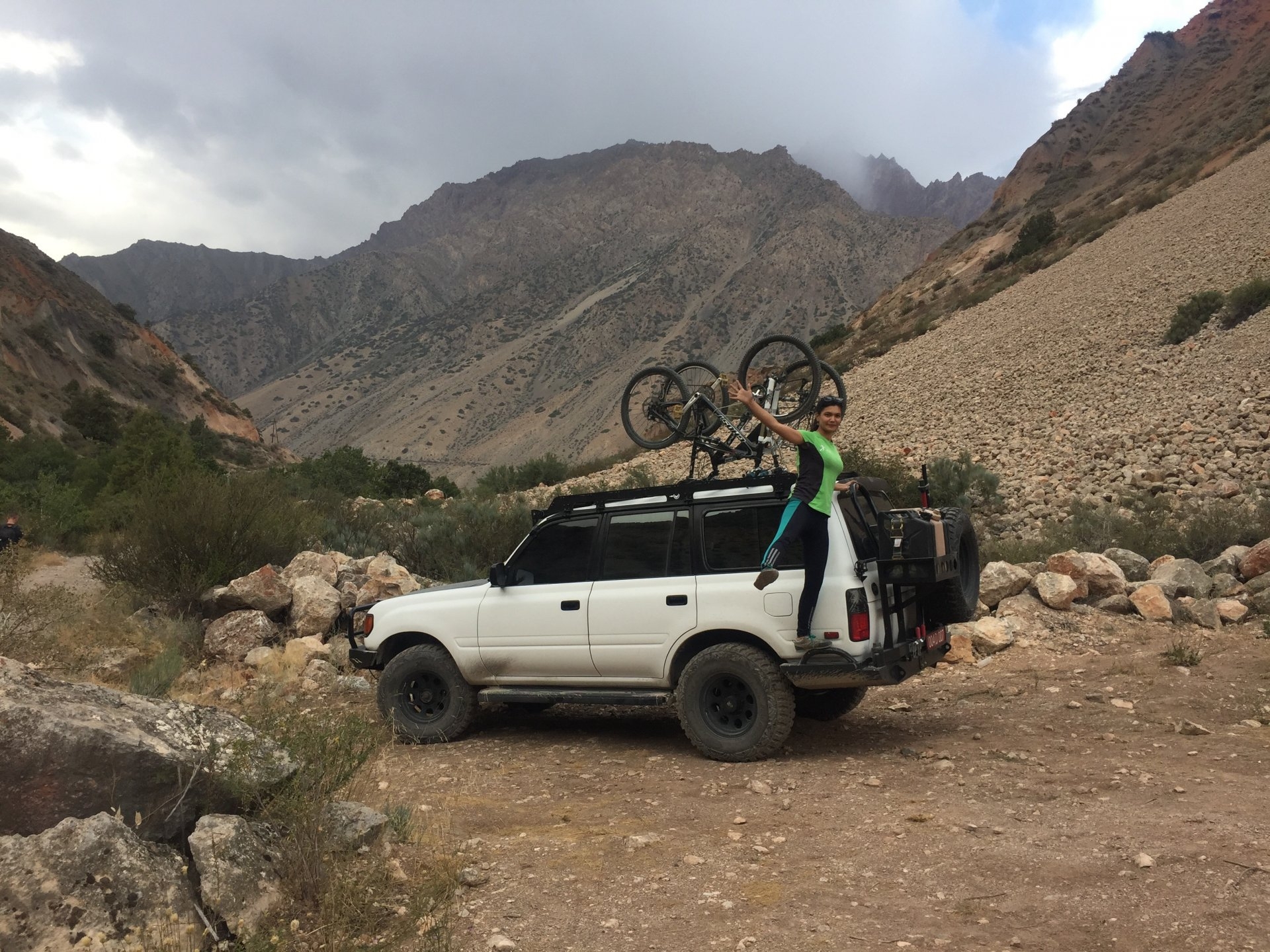 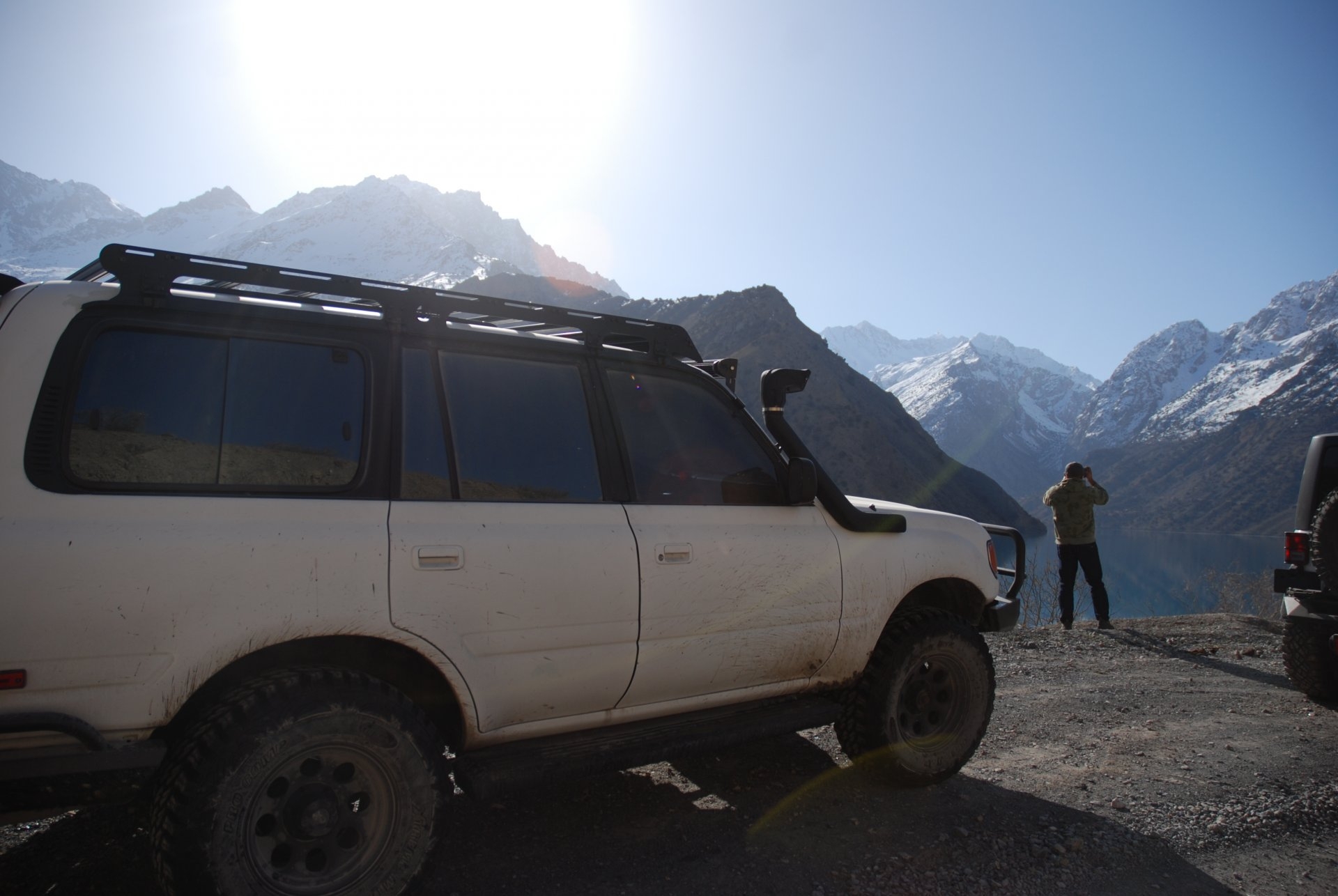 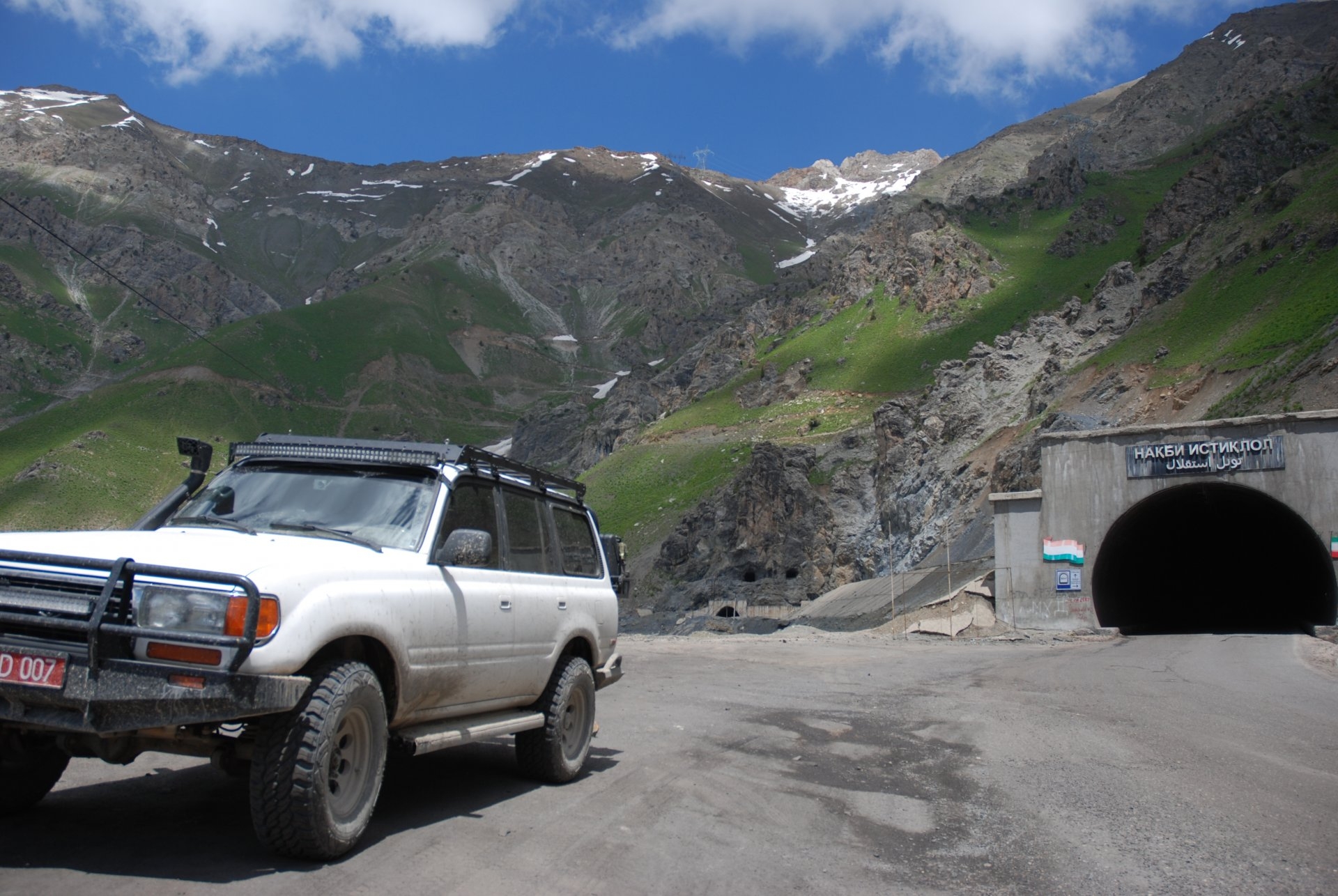 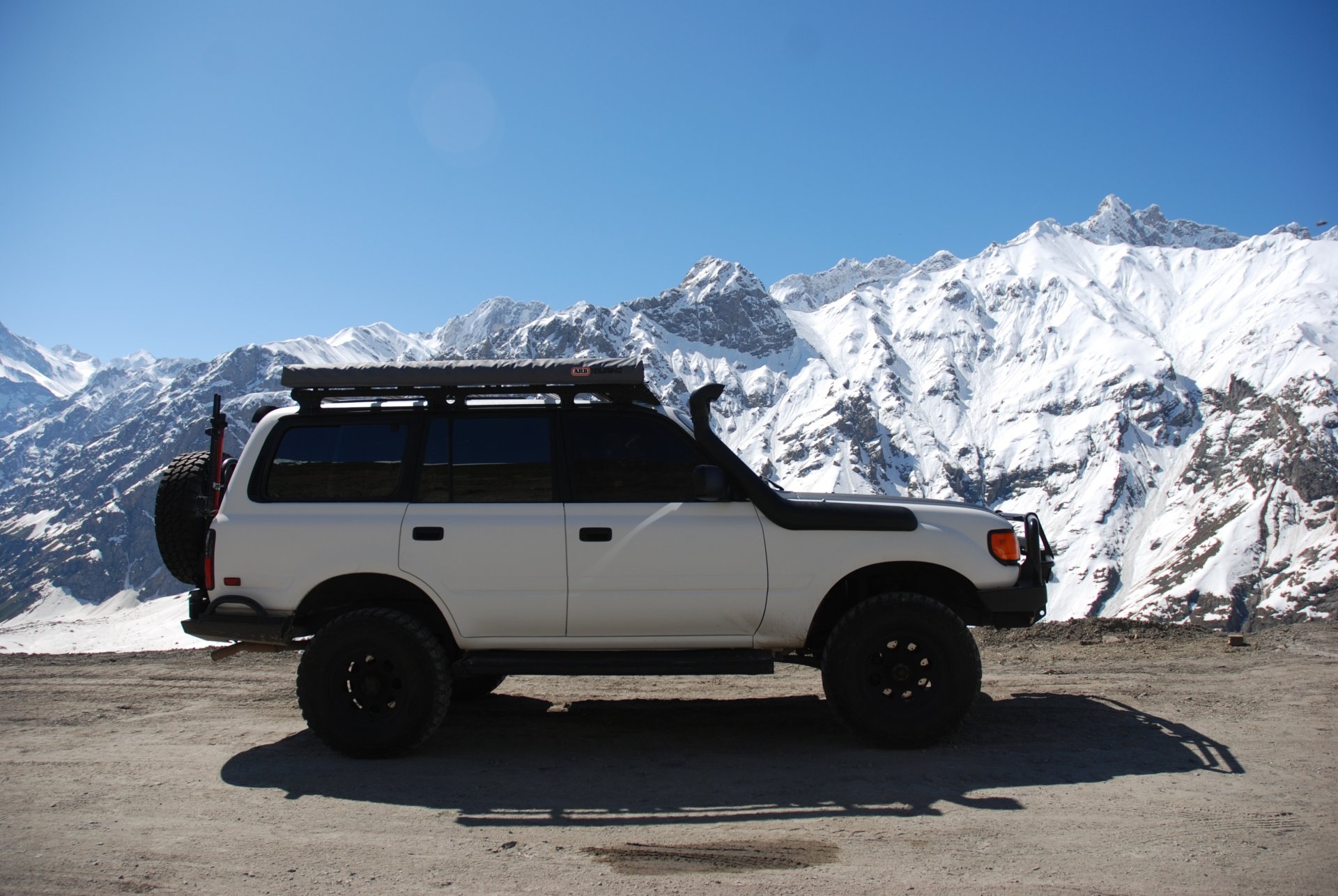 Again with the f***ing fingers. I use to curse out the Tajiks and Russians for touching my s***. Then the Plasti-Dip got a tear and water/air pockets started forming. After more research on Pinterest and Youtube, I discovered Raptor Liner. 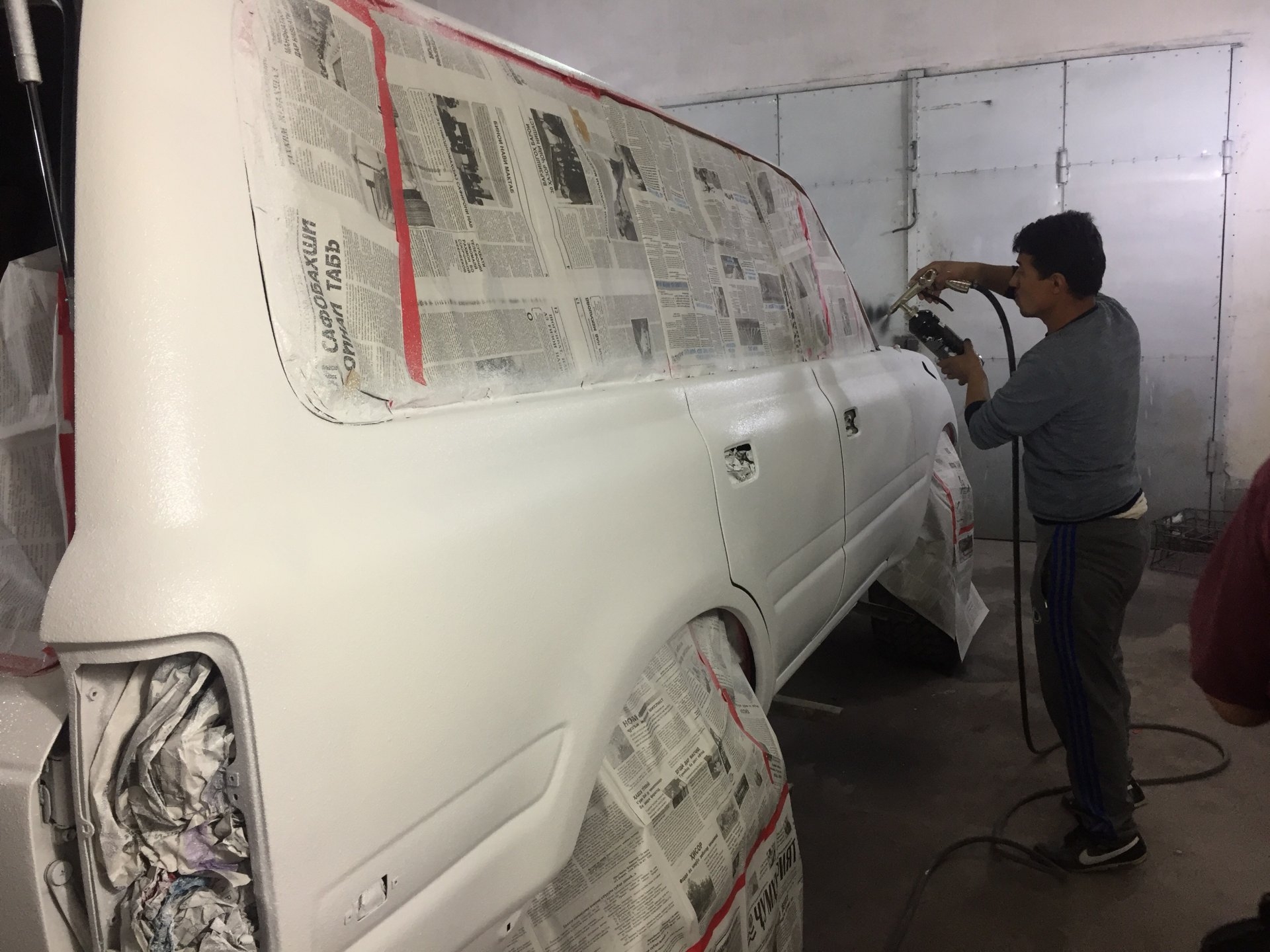 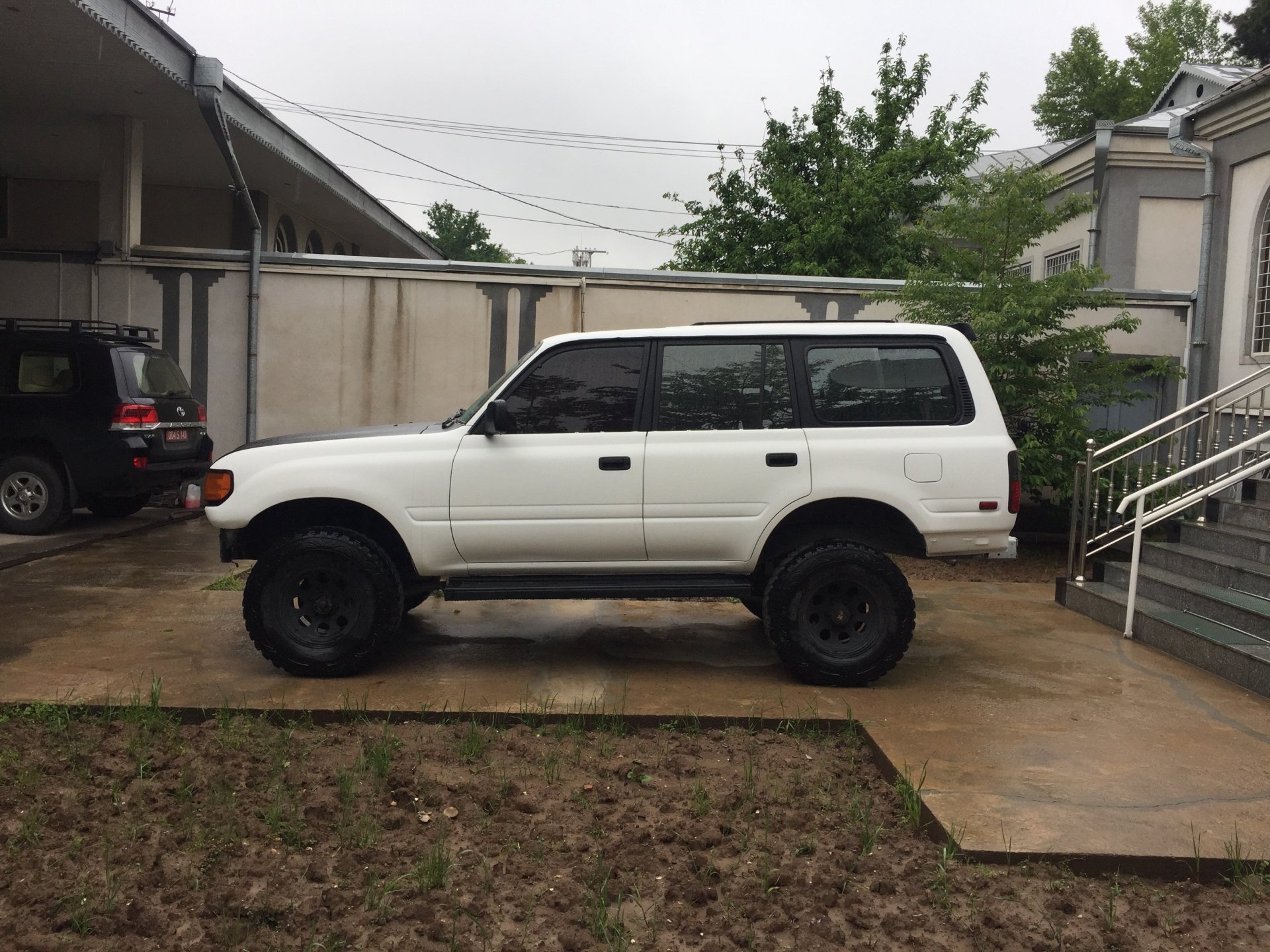 Ship to the States. 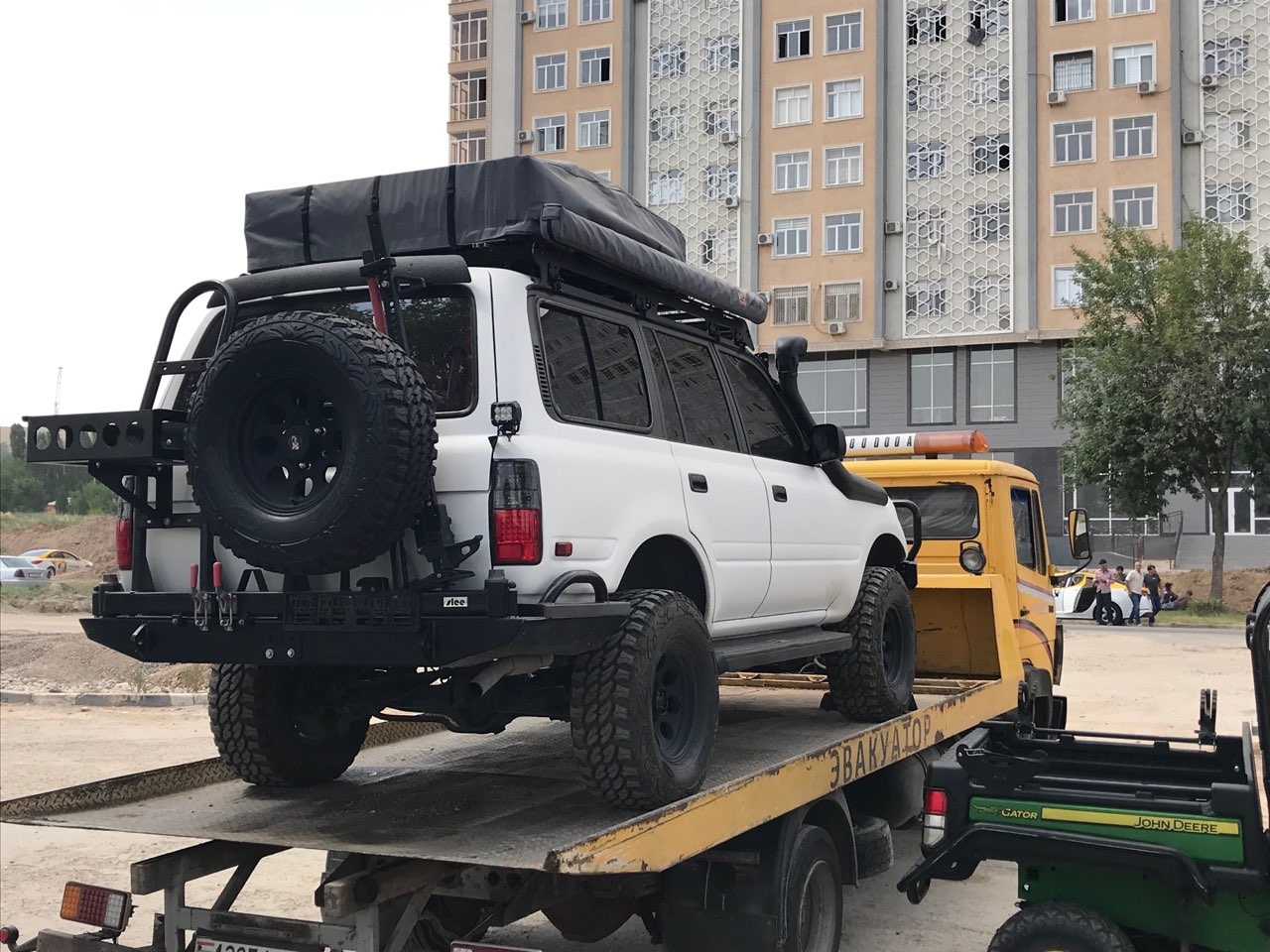 I timed the Slee bumper to be ready about the time I got back to the States. Sold the ARB on Facebook to a member of the Tornado Alley Cruisers. He told me about MUD and the Cruiser Club. At that time, I've accidentally been on MUD when I Google searched something. In addition, I was not big on car clubs because I was in one as a teen with imports. I thought to myself “I’m too old for a car club”. However, made a MUD account that night and started browsing. 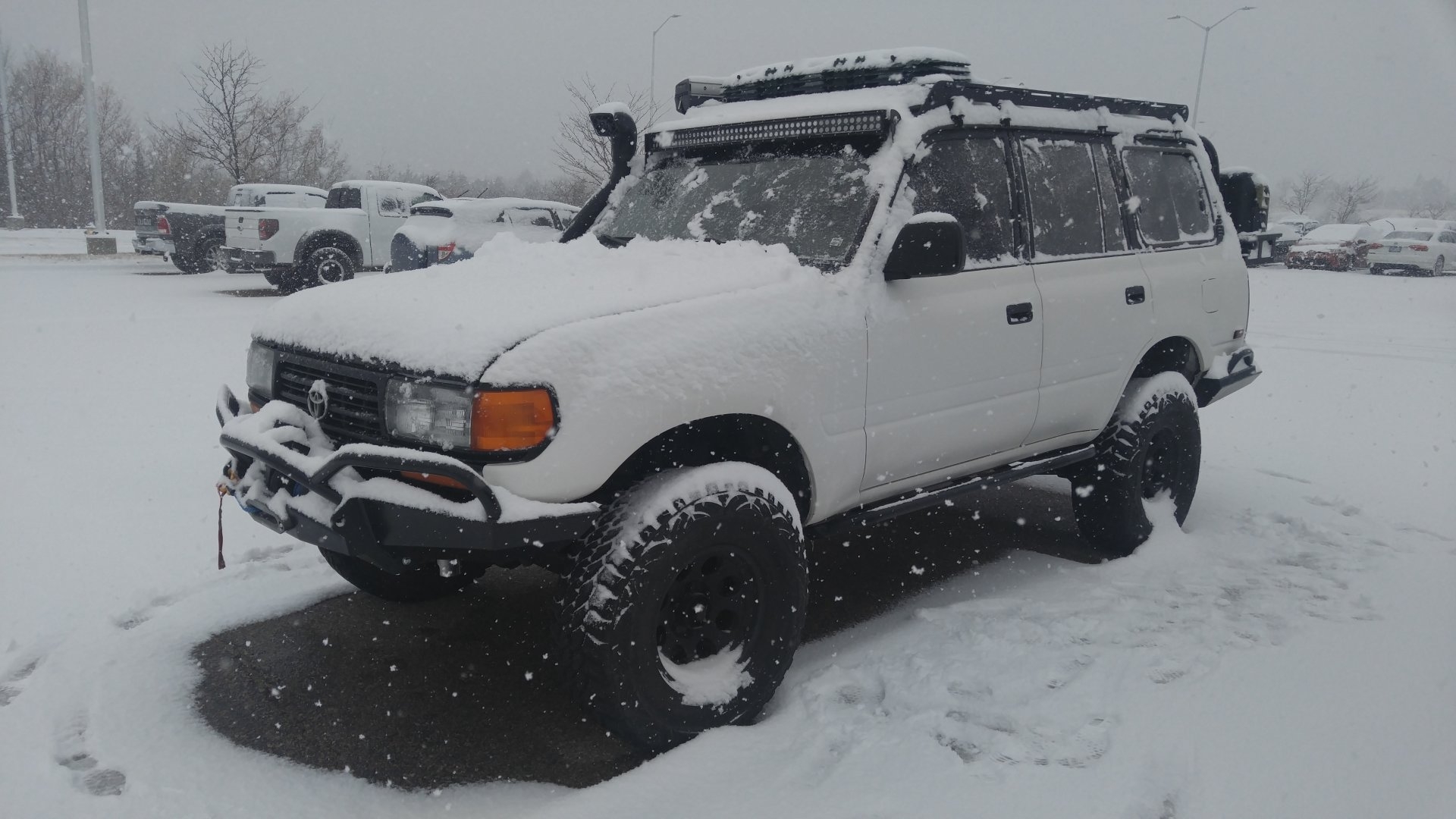 Late Aug 2019 I see this Turbo on Wits End’s website. Late Sep 2019 I make the purchase . . . @NLXTACY calls me. He asked me some questions about my engine, and he says, “You sound like a good candidate”. Gave me some recommendations of what to do before the turbo arrives and things he wished he had done. Nov, I'm ready for the turbo, Dec still awaiting. Jan 2020- May 2020 I’m deployed.

Get back from deployment and the Tornado Alley Cruisers email me to go out on one of their runs. I’ve done overland stuff but never crawled. I put on the RTT and head out there. These badass cruisers and mini trucks roll into the site. I'm thinking I'm bout to meet some backwood, redneck, wild country boys, but instead, I met doctors, lawyers, and established individuals. That’s for everything @2fpower , @chap79, @BILT4ME , and @kc_chevota. Everyone was awesome and taught me a lot in less than 24 hrs.

Dec 2020 got orders for North Carolina. @2fpower gave me a virtual handshake with the Ol North State Cruisers before I arrived and @tstepp920 allowed me to send my cars to his place before my arrival. My wife asked, “Could you trust him with your cars? You don’t know him”. I said, “It’ll be alright, he’s from the MUD site”.

Feb 2021, still no turbo. I'm starting to get frustrated. Not because of the money, but it felt like I was being ignored. I don’t play on social media, but I still knew what was going on with Joey’s wife. I reached out to Joey a few times, but no answer. I sent my last email before I went crazy, and he replied. . set me back at ease.

Drinking (how I make all my purchases), I said, “if there is a supercharger in the classified on MUD I’m going to buy it). On page three, there it was. 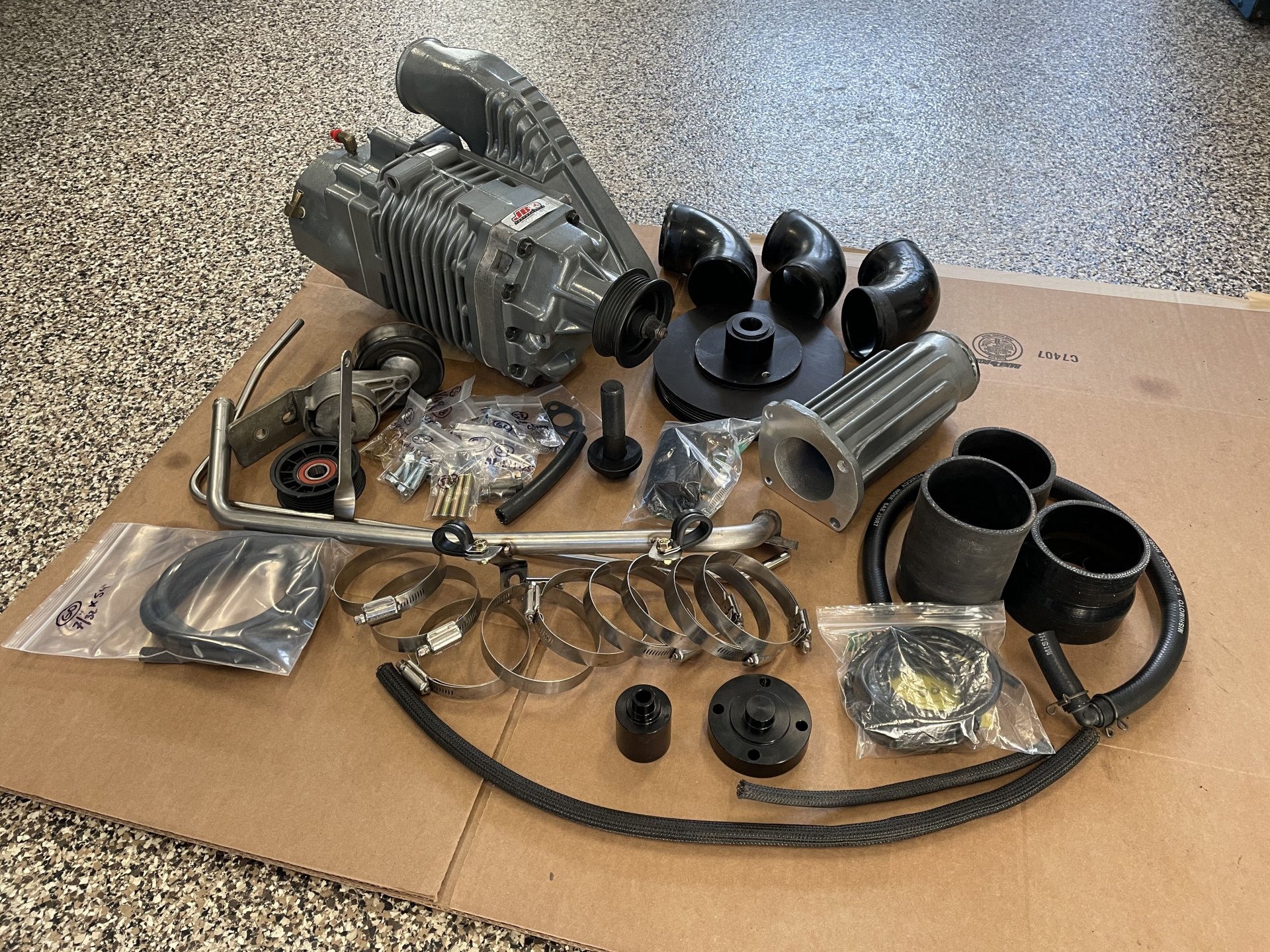 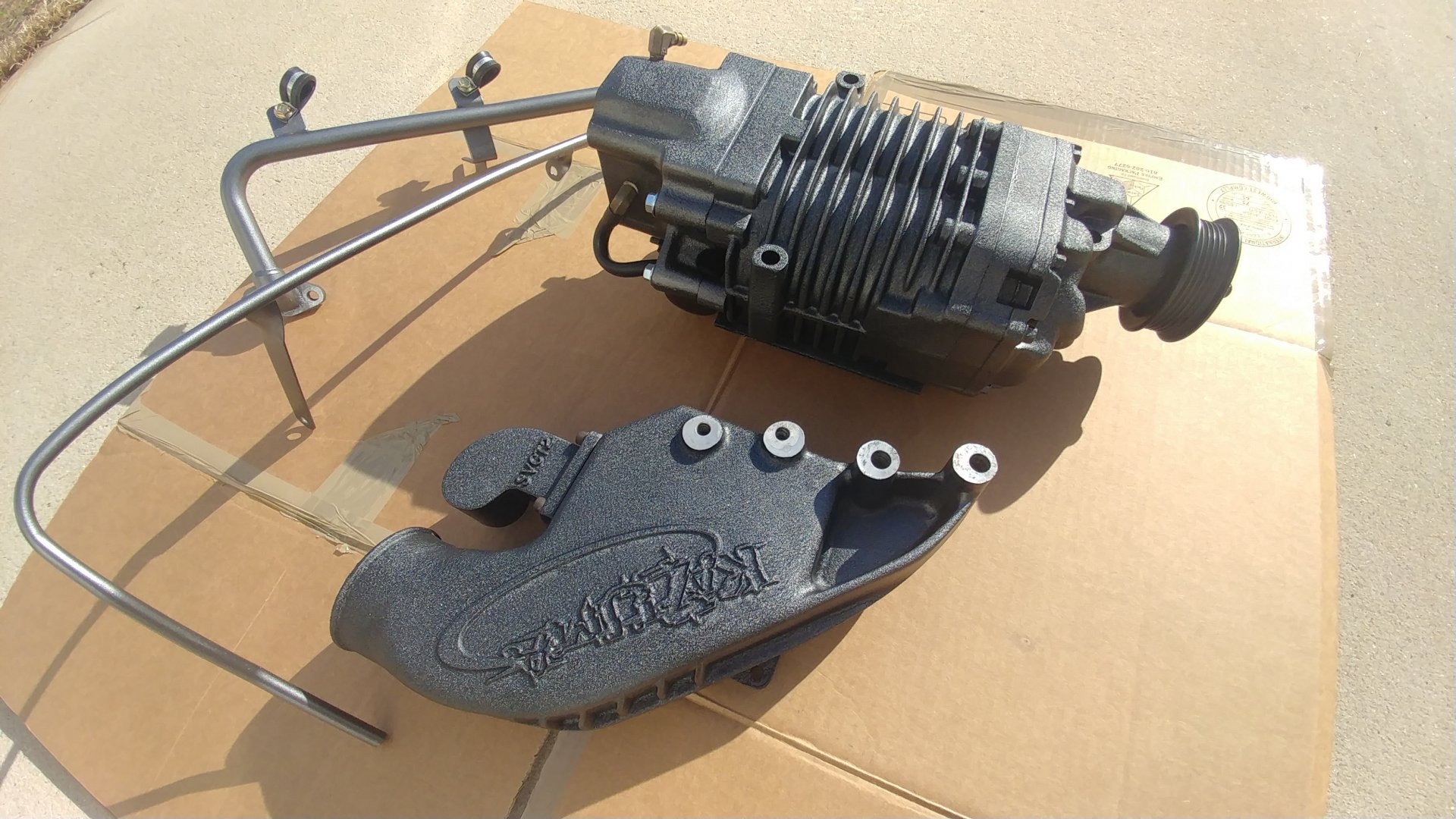 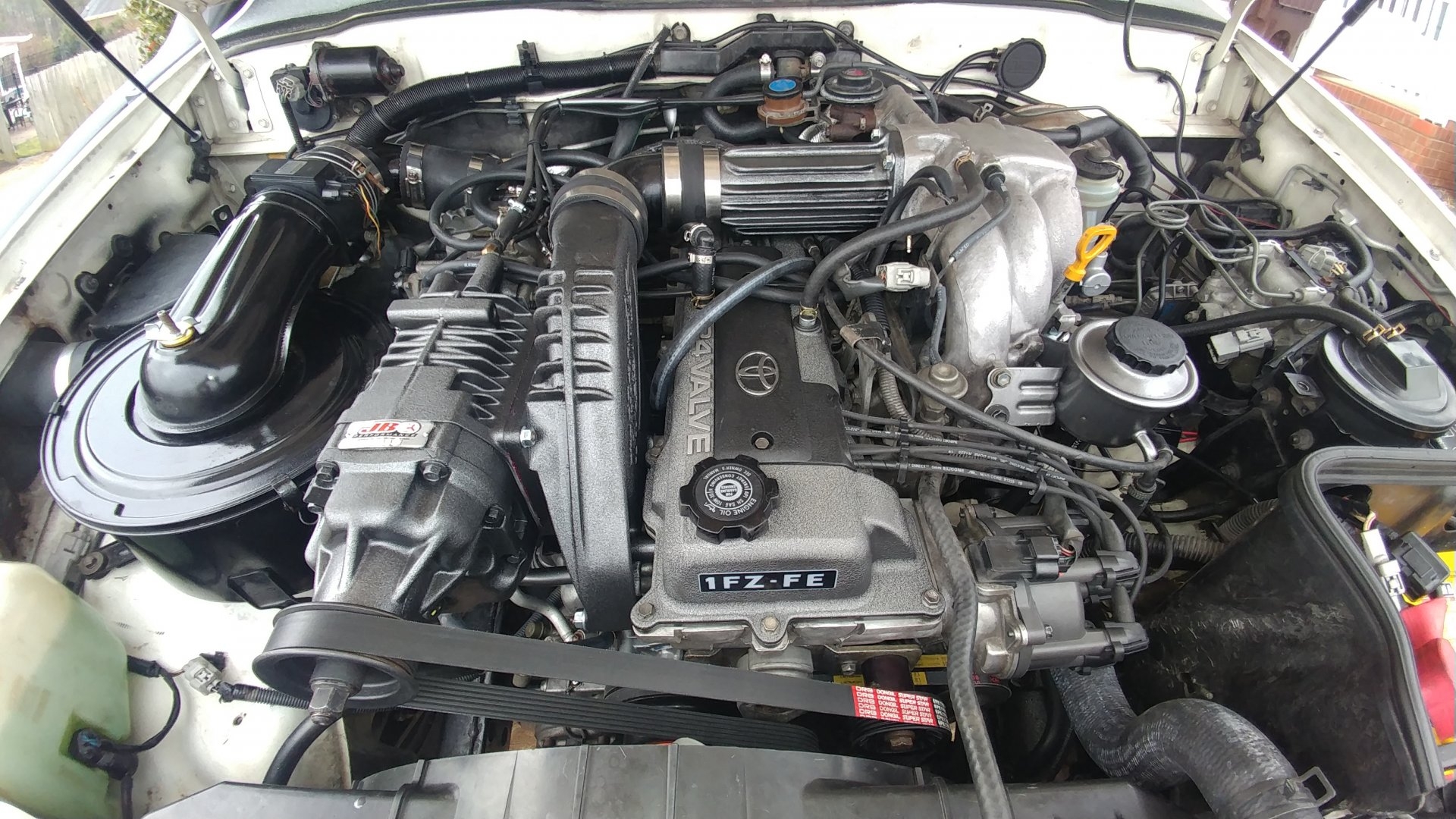 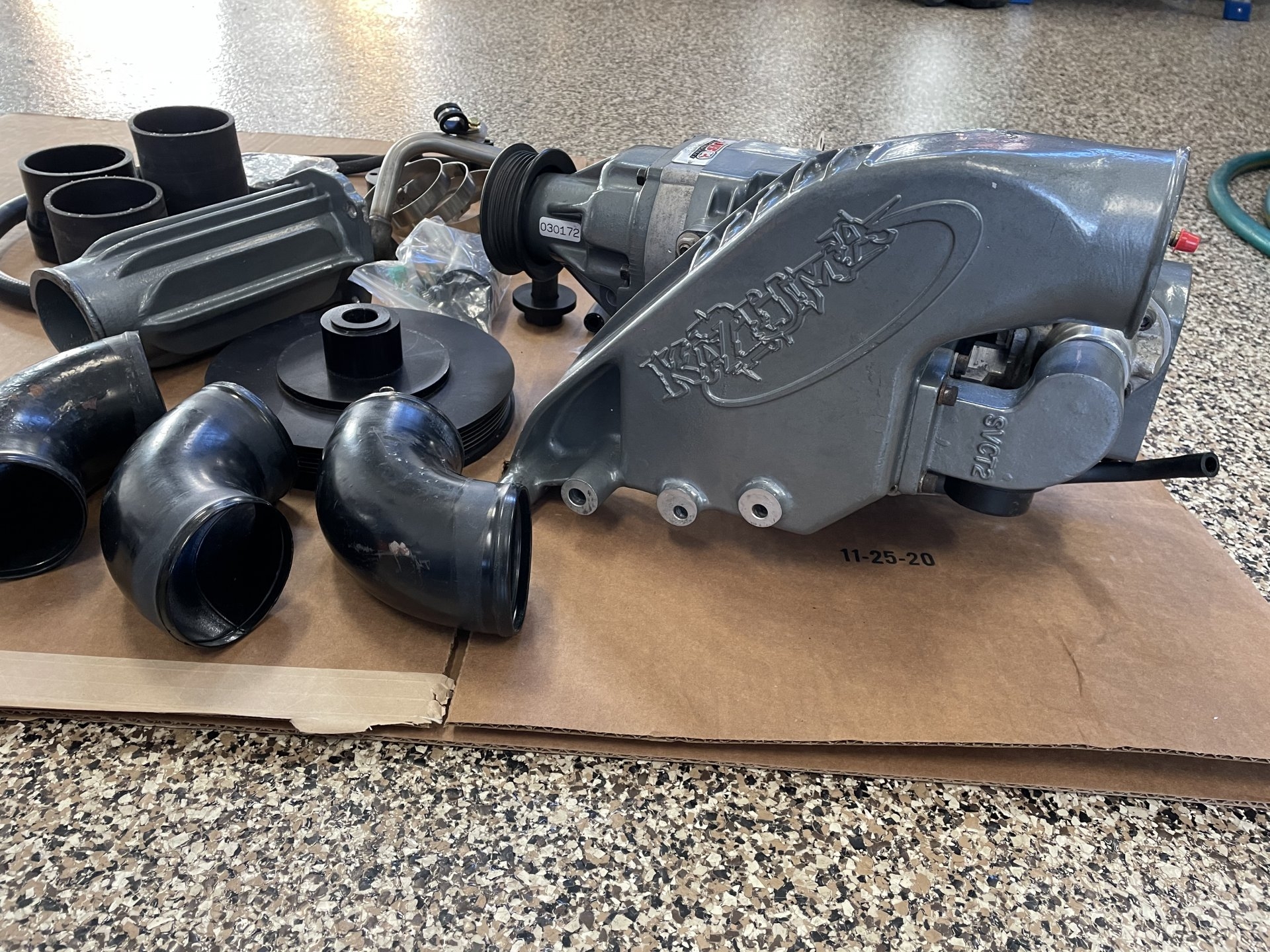 Sold my place in line to a MUD member and everything was square. Three months later, White Sheep in dying.

I am not mad. I am not sad. She will be fixed even better than before, and just like a trans she becomes a he. He will be known as “Deacon Blues”
Last edited: Jun 16, 2021
Project Rehab: 94'LC - Project Rehab
Deacon Blues: 95' LC, blown & intercooled, SLEE'd, 4" lift, DC front/rear DS, on 37's - Call me Deacon Blues
TLCA # 50407
Veterans Highway
Tornado Alley Cruisers
Olde North State Cruisers

Sheesh you just can’t win on this

to be fair, turbo delivery had zero to do with family health drama and everything to do with covid and vendors. I’m still dealing with it but they are at least shipping…sloooooly

NLXTACY said:
Sheesh you just can’t win on this

to be fair, turbo delivery had zero to do with family health drama and everything to do with covid and vendors. I’m still dealing with it but they are at least shipping…sloooooly

No worries. You were waiting for awhile.
Land Cruiser solutions you didn't know you needed.
Absolute-Wits-End.com

Damn, sorry to hear that you're having trouble!
My dad and I really liked the supercharger setup when we got a chance to look at it during the Relic Run.

Let me know if you do a wrenching day, I'll try to make it!

Sorry to hear about the engine! As Pip said above happy to lend a hand if I can. Look forward to engine details.
Thomas S

Pip Bernadotte said:
Damn, sorry to hear that you're having trouble!
My dad and I really liked the supercharger setup when we got a chance to look at it during the Relic Run.

Let me know if you do a wrenching day, I'll try to make it!

Sorry for your loss!

I hope you can get it back up and going quickly!

BILT4ME said:
Sorry for your loss!

I hope you can get it back up and going quickly!

S.CarolinaFZJ80 said:
Dang. That sucks. Was hoping it was just a harness issue.
At least you found it now though.
Click to expand...

Yeah. I'm not worried about it though. s*** happens. Landed on some money a week ago, so it should be alright

MyWhiteSheep said:
Lol. . While I'm in there. I'm listening.
Click to expand...

How deep are you going to go?

Window Vents, Wind Deflectors, Vent Visors, what ever you call them..........