A leak under air compressor

I found this info
Cruiser Outfitters

I never really use the front air locker and the oil in the front diff was just changed. Is there something easy to check other than pulling the 3rd member?

Upon further inspection it appears to be coming out of the solenoid on the left side, closest to the engine. That is where it looks to be starting to pool. I did use the rear locker last weekend. I need to identify which locker that goes to and at least check the fluid level

I had that happen to me once with my old FJ62 with ARBs, and i seem to recall it was a plugged axle breather.

I had the same issue, and found the background and a fix. Hope it helps.

Oil mist issues with ARB Air Lockers in a 200 series

This is more of a “learn with me” than me asking for help. As some of you, I like to real world test just about everything, so I’m going to change how I talk about stuff, and try it this way instead. Make it less about me or theory of products, and more about actual results. Air Lockers. I...

For now, I cleaned up the engine bay under the compressor and the underside of the truck with Brake cleaner and a high pressured wash.

The front diff seemed full, The rear diff was a little low so guessing that is where it came from

Now I can monitor it to see how bad it is. For all I know this has been going on for years and finally made 2 drips on my floor

As I read, one potential is the diff breather to get clogged. Knowing there is a valve as part of the breather setup, wanted to see if there is something I could do without access to the inside, meaning without pulling the diff.

Can I replace the valve without taking the third member out?

I appreciate Rob's post on the purge valve. I will look into that as well. That is a mitigation for the problem though rather than addressing it. I also dont want to spend thousands taking the diff out multiple times like posted in my second post with the link to Cruiser Outfitters

Found this answer in the 80's section


Dave 2000 said:
OK, this is a common problem with the ARB locker, often it is caused by the 'O' ring not being seated correctly on the carrier. There is a manufacturing seam on some of the 'O' rings and this acts like a screw thread slowly pushing oil up the air pipe to the solenoid. However, in theory this cannot happen if the solenoid is sealed, it seems there were some new solenoids available to stop this. It used to happen on my Discovery, I swapped the solenoids front to rear and the problem moved, personaly I would fit a new solenoid after disconnecting the line at the axle and blowing the oil out.

ARB also now sell a better designed 'O' ring which also helps to stop this problem along with a reduction in air leaks.


This would be easier than using the purge valve

Romer said:
That is a mitigation for the problem though rather than addressing it.
Click to expand...

Unfortunately Ken, the problem is ARB’s design does not work super well with how the newer internal structure of Toyota 3rds and clamshells.

That’s from an air locker engineer at ARB and from East Coast Gear Supply. You can replace all the seals you want, but it will, again, pump up the air lines.

It’s the fact that the seal housing air port sits in oil, not above it. Even with a perfect seal, when you blow off the pressure, a tiny bit of oil will move into the line.

Romer said:
Found this answer in the 80's section
This would be easier than using the purge valve
Click to expand...

To get to those o rings, you have to pull the 3rd and clamshell. It will temporarily fix them, as you’ll clear the air lines of oil. But the oil will come back, it’s just how it works. The more you use an air locker in the 200s diffs, the more oil will move up the line. I use my front and rear air lockers every time I go off road, which is almost every time I drive it. So I push the oil around pretty regularly than others.

ARB knows it, they just don’t want to acknowledge it so publicly. That all said air lockers are still the only locker I’d spend money on.

I’m not trying to discourage you, I’m just trying to save you from wasting time and money. Like I said, new square o rings are fine and all, there are more deeper in the assembly. But the best way to find out the issue is to test.

The important part
So I would say this Ken. Test how long your front and rear lockers stay engaged/how many minutes between compressor cycles?

If you can lock up, and you don’t hear your compress go off for say, 10 minutes. You don’t have an o ring issue. You can also do a pressure test with a gauge, if you have access to one.

My front/rear last for 75 minutes between compressor cycles as a comparison.

Replace your factory breather. They are $10 and it’s just popped on the top of a rubber hose.

If your breather is new, and your compressor doesn’t cycle for 10 minutes. It’s simple the design of the two companies not playing nice together. That’s why ARB made the purge valve, they know it needed it, it just doesn’t sound good from a marketing stand point.
Last edited: Jul 26, 2020

Thanks Rob, last week on the trail my compressor did not cycle more than normal, which is a long time in between cycles. Definitely greater than 10 minutes

I have the extended ARB breathers up into the engine bay, no oil coming out of that.

where did you run the exhaust line to? I assume that will drip only when you press the purge line so needs to be where you can put a pan under it

How often do you purge? 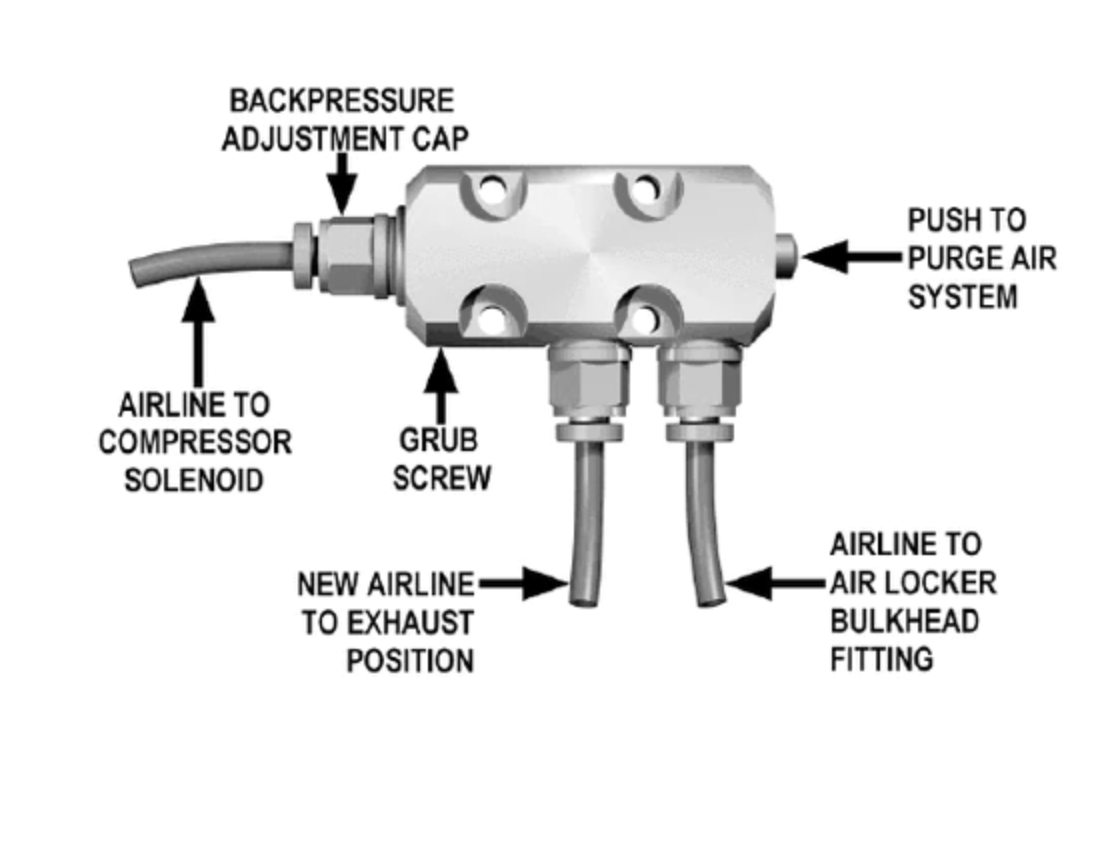 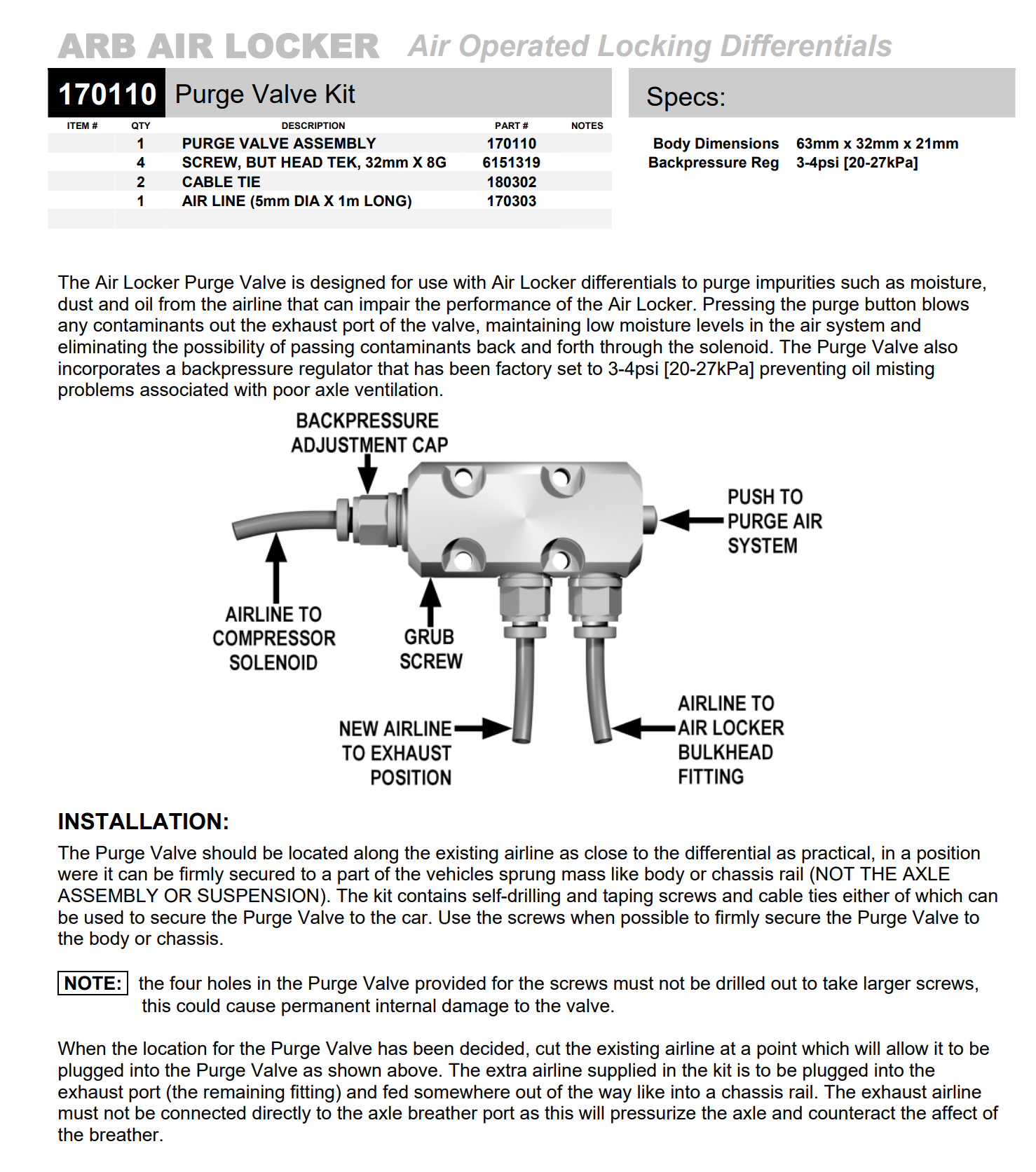 Can I force my broken recirc flap to fresh air and lock it there?