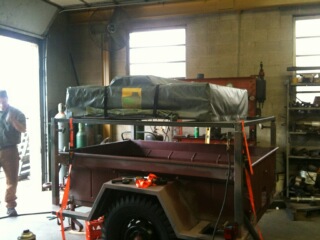 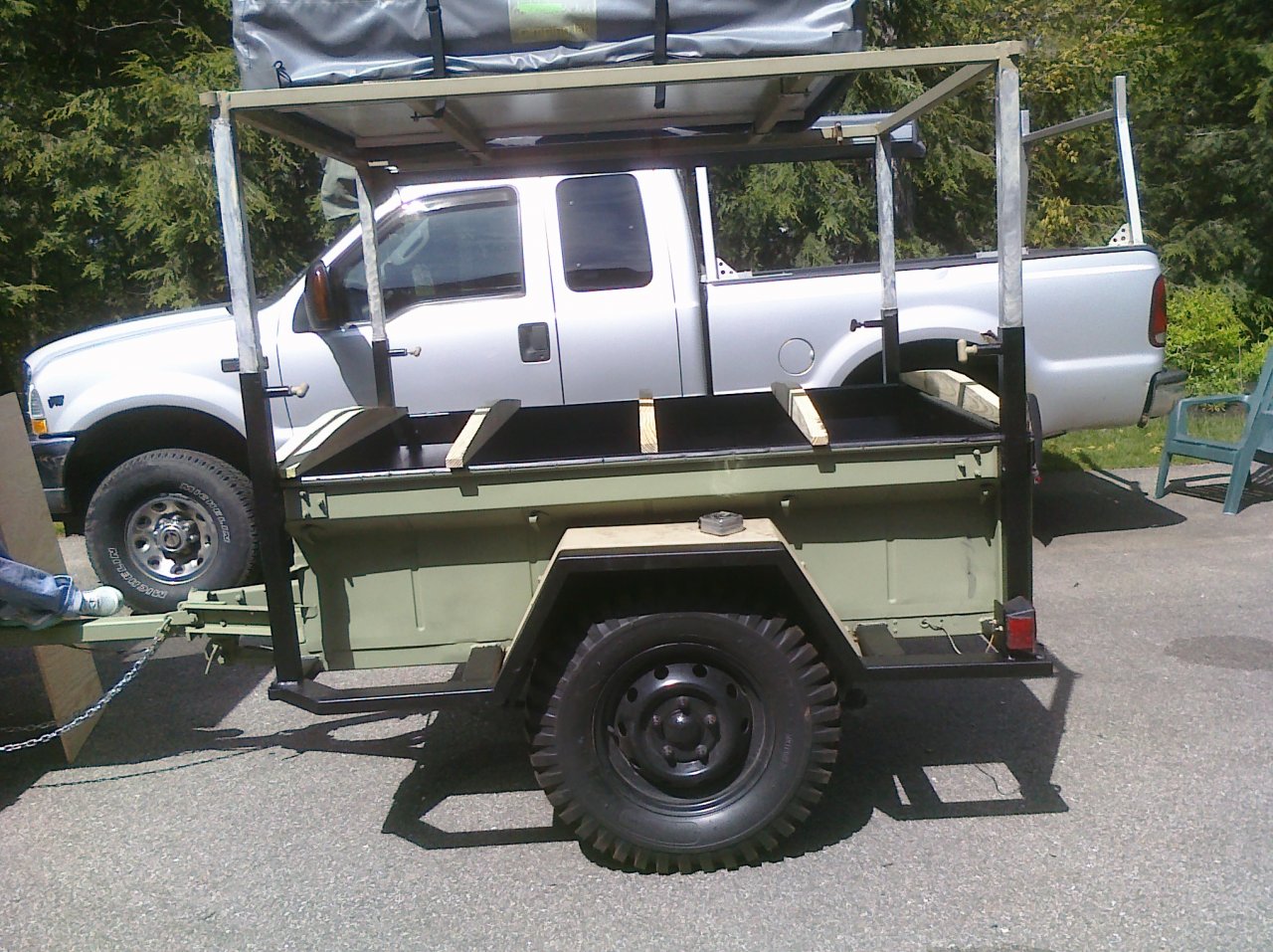 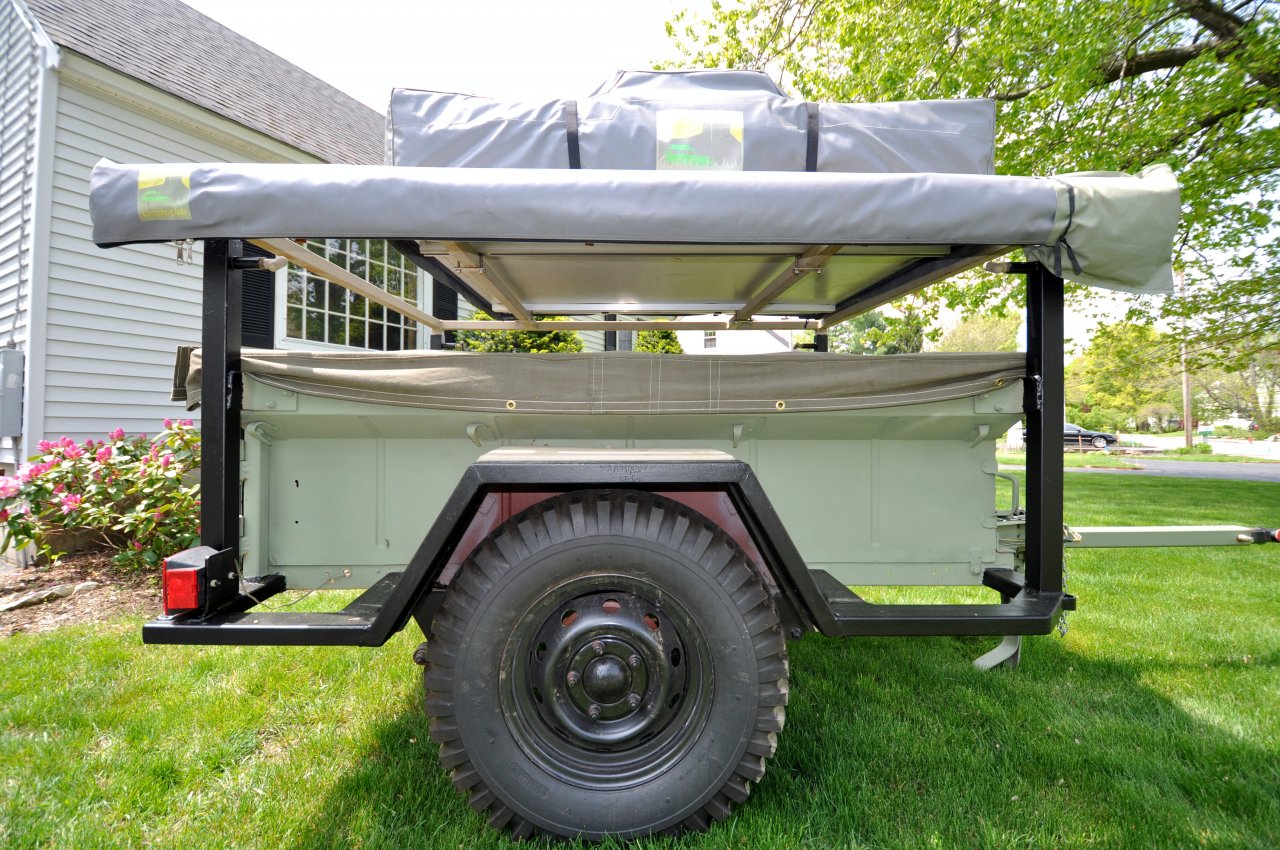 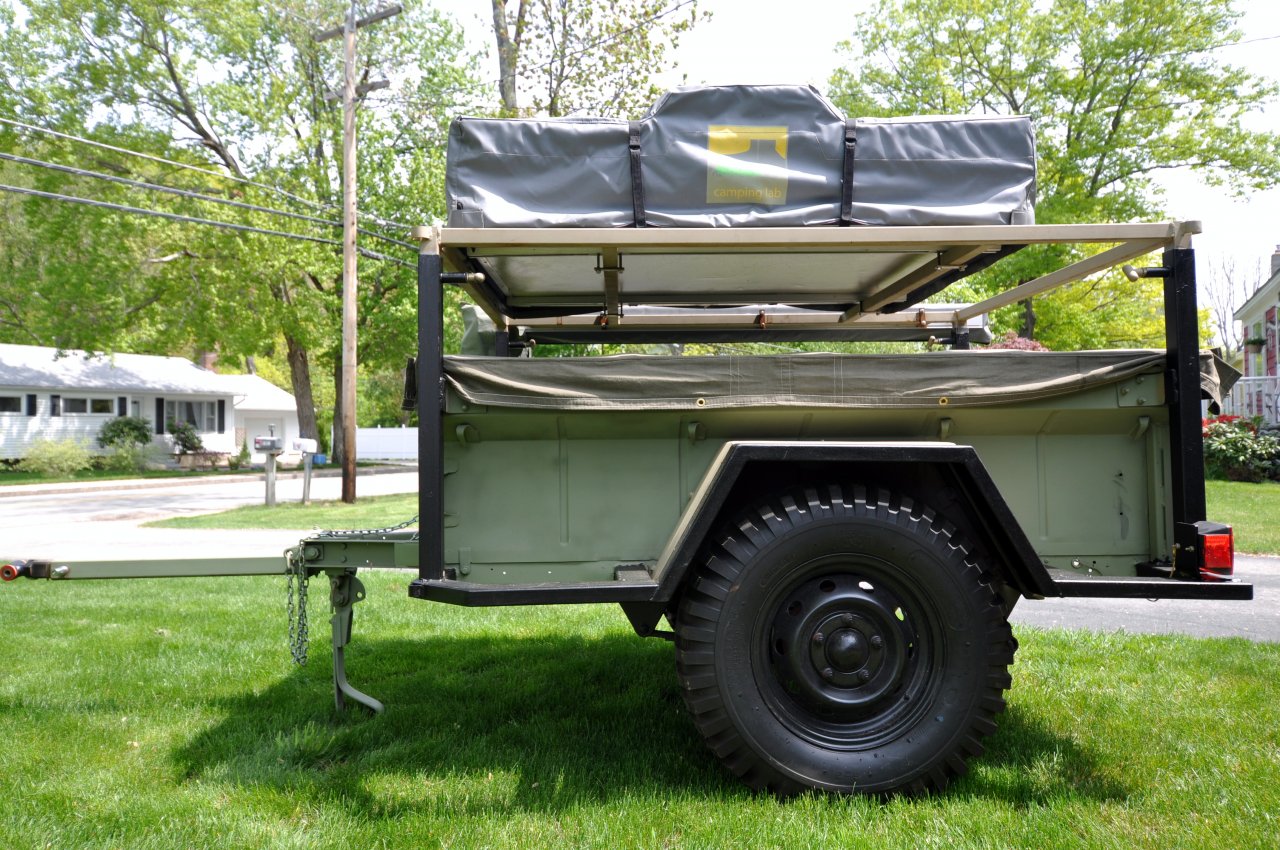 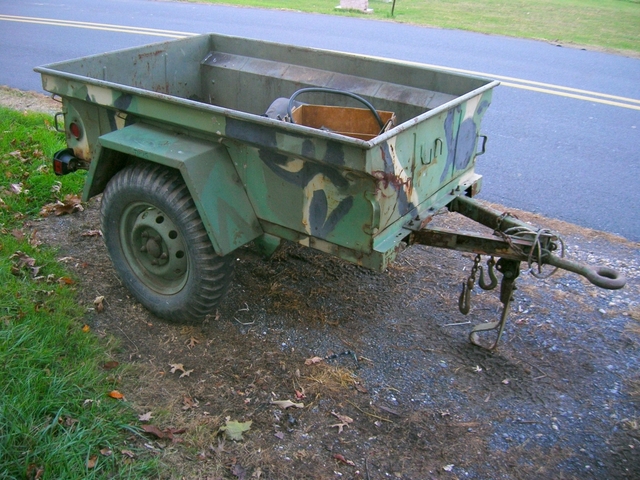 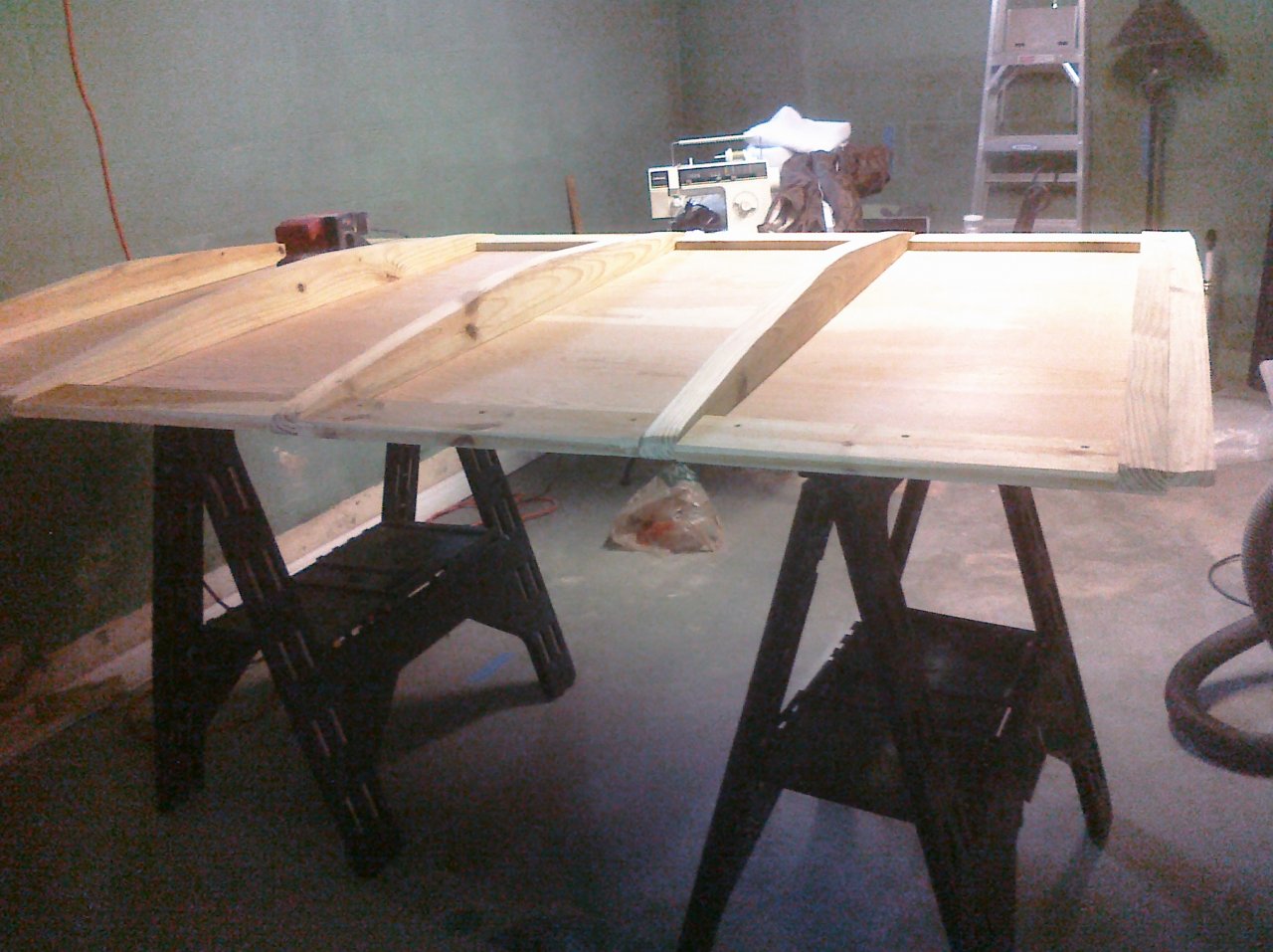 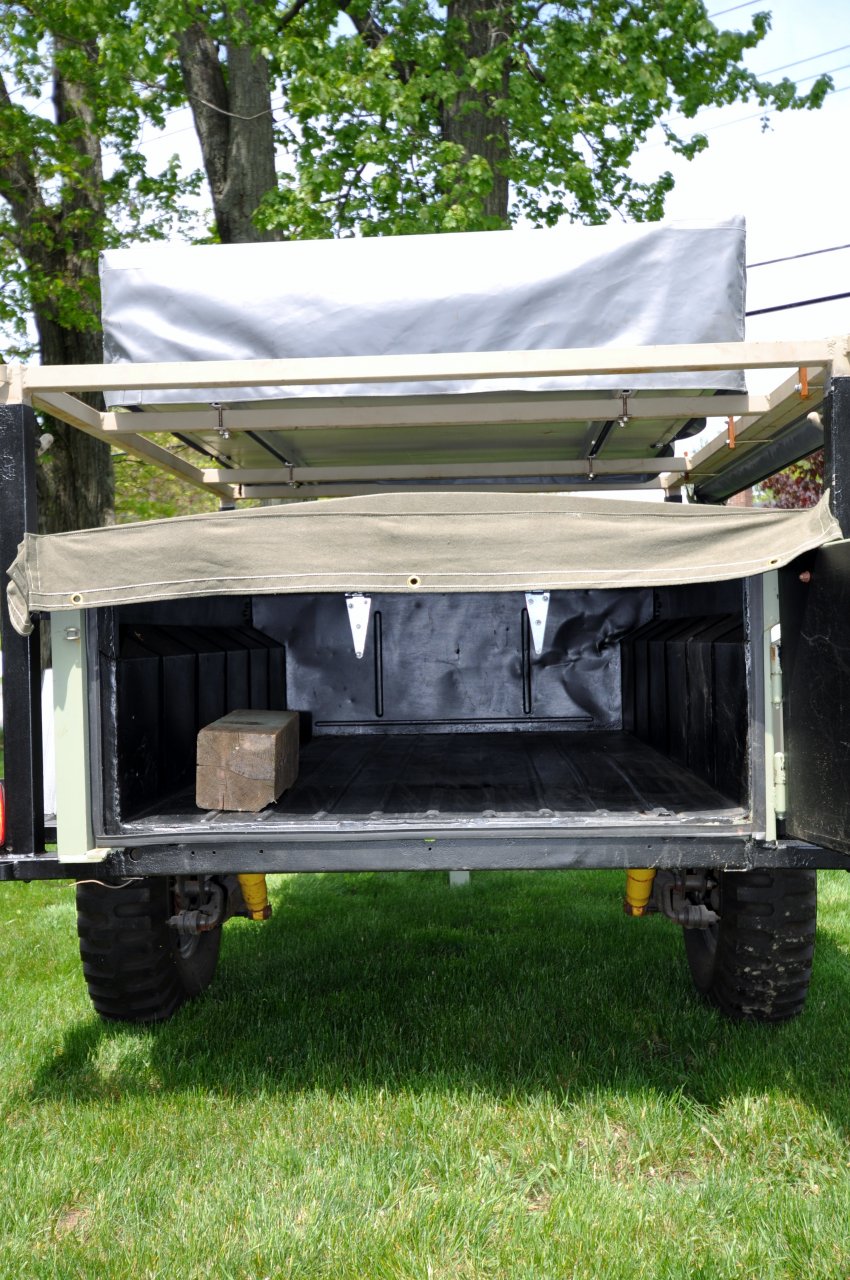 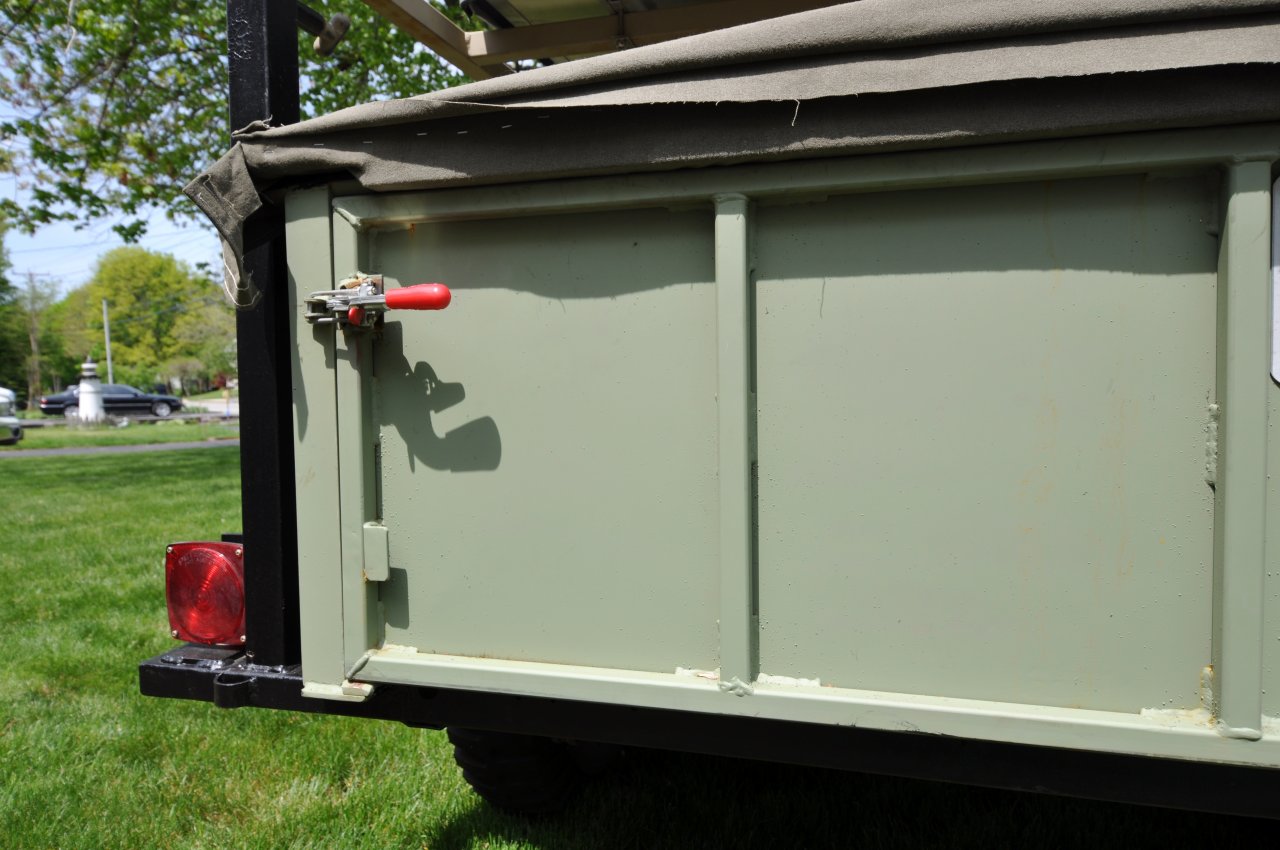 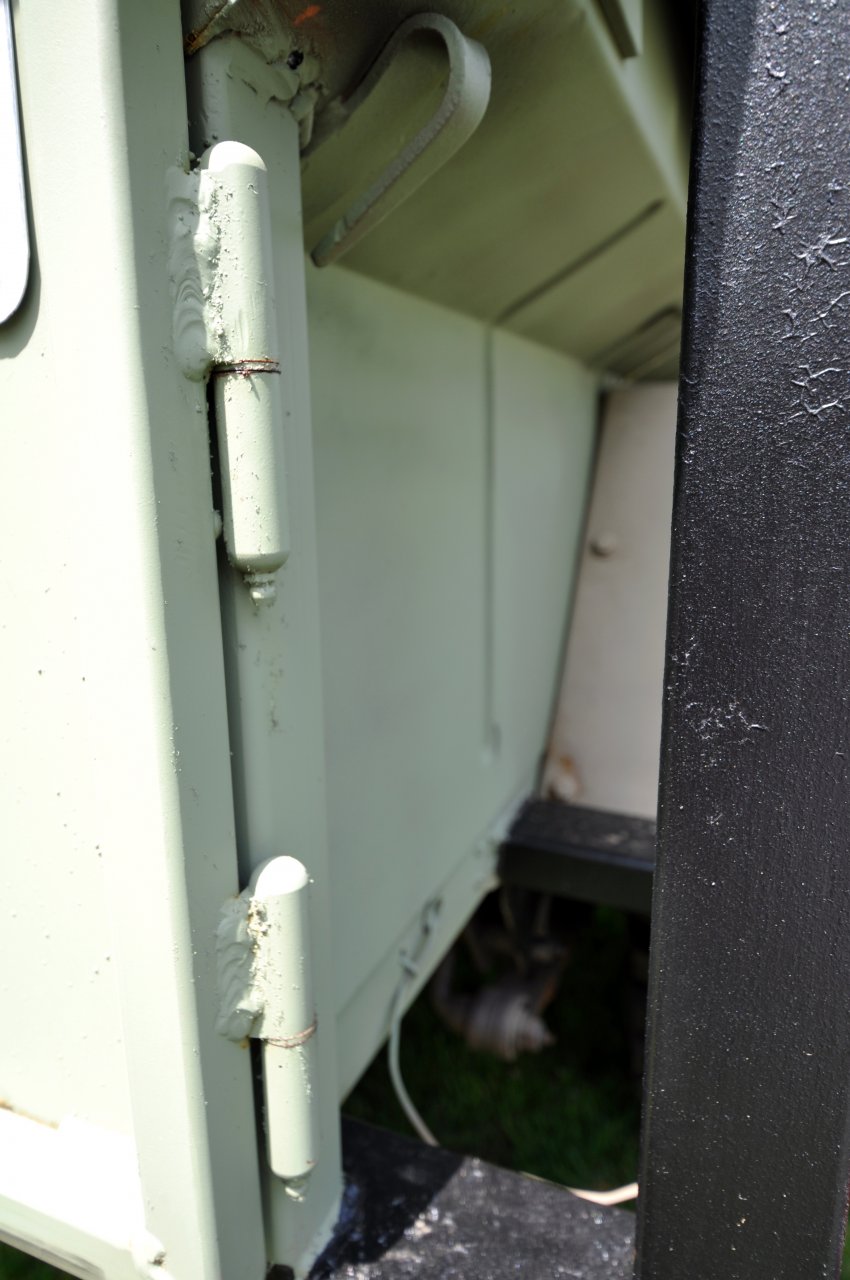 A few updates to my OP- comes with a full size spare and two jerry can holders. (holders are not attached)
P

Hello. Just a couple questions. Condition shows good. Any rust? What does the trailer need,if anything?
Comes with RTT...how many does it sleep? Condition of tent?
Pay for shipping?

I have a trailer also, but when I saw his price, I think it's a smoking deal! I would do,everything I could to get it here!

I'm traveling this week so I'll summarize the answers . When I get home I'll shoot a short video.
The trailer has not been compromised by rust. There are a few spots here and there that could use some touch up paint. (cosmetic). The platform risers do not just spring up but they need to be pushed up and the same is true for lowering the platform. It's not a perfect design but it works well. The tent fits me(71"), my wife (65"), and our 60lb dog just fine. The tent is in great overall shape with nothing that requires repair. The awning - Also included- needs the one arm either welded, replaced, or just continue using the rigged up splint. I'm willing to entertain shipping provided you pay for it, sort out the logistics and I've received full payment prior to it leaving.

@greenbeast appreciate the validation. The trailer is solid through and through. Just pack up, backup, hook up and rollout on its next adventure.
P

I would certainly appreciate the video. Price break to sell without the tent?
Thanks again!
S

I am in CT and interested in this without the tent. Wife will not use a used tent.
Do you know how easy it would be to add a rear hitch?

@sikocycles with some welding skill it shouldn't be too difficult to add a rear hitch. Plenty of good metal under there. As for the tent PM for specifics but I'm not attributing a whole lot of value to the tent as I got it lightly used a few years ago for a very good price.

I have time with the holiday this week and will shoot a couple quick videos. My apologies on the delay.

My plans have changed and at this time the trailer is no longer for sale. Thank you for everyone that expressed interest.

scottymarks said:
My plans have changed and at this time the trailer is no longer for sale. Thank you for everyone that expressed interest.
Click to expand...

Hay just checking since it’s been a few years if u still have it and still keeping it ?
Cheers
-artie

@trailsallday thanks for checking in - the trailer is not currently for sale and interestingly enough I spent most of this weekend going through it's first major overhaul since finishing it
- I added a piece of 48"x 65" luan over the arched plywood top to prevent sagging of the military canvas. The canvas held up incredibly well for the lack of care I provided. I ended up with a small tear in the rear portion of the canvas after it had fatigued. After taking the canvas off there was only that one spot that showed signs of moisture - everything else was dry.

- I fixed the awning,INSIDER TIP, if you have an awning the adjusting arms can be replaced with telescoping pole (like a broom handle) from lowes for very inexpensive. I searched most of the dealer sites (tepui, arb, etc) for a replacement arm and wasn't satisifed with any of the info/products I was finding.

- cooktop has been extended to fill the entire length plus added depth and built in some levelers to keep the eggs from sliding to the front of the pan. It's also going to be wrapped in zinc.

- ANOTHER TIP - Vapor/condensation barrier in the rooftop tent - these can be really pricey but they solve a fundamental problem with the design and moisture. You can use HVAC "bubble wrap" It's used to insulate duct work and costs next to nothing - it can be found at lowes/home depot. I used a 48" wide piece and cut the length into two sections and glued each section to the inside of the tent floor. (we'll see how bad of an idea it was to glue it down but I got sick of it sliding around and getting caught in the gap when setting up. (I went with a really low R-Value with "small bubbles" so they wouldn't pop when sleeping or kneeling in the tent. I've had this setup for 4-5 years and it has eliminated the condensation. 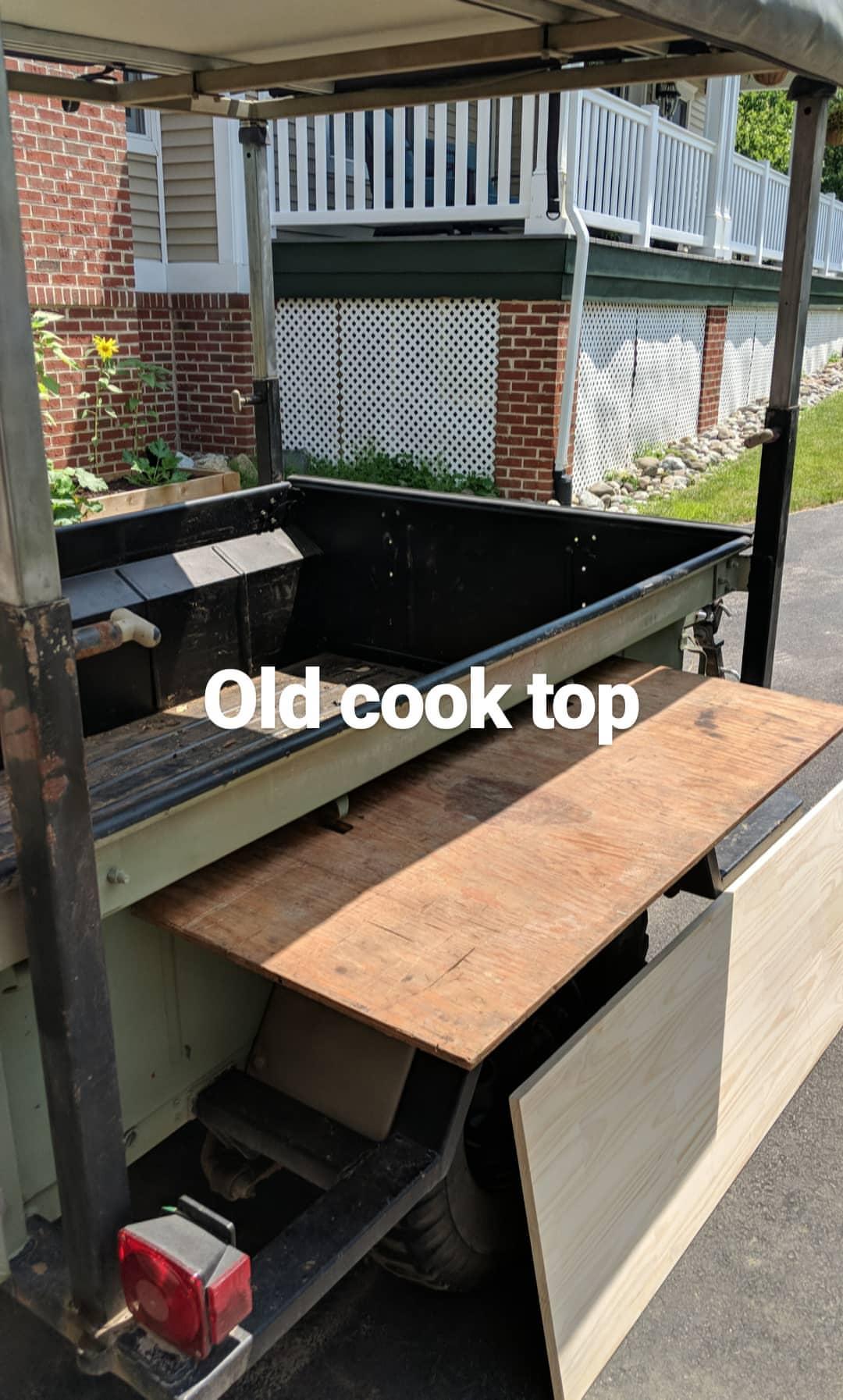 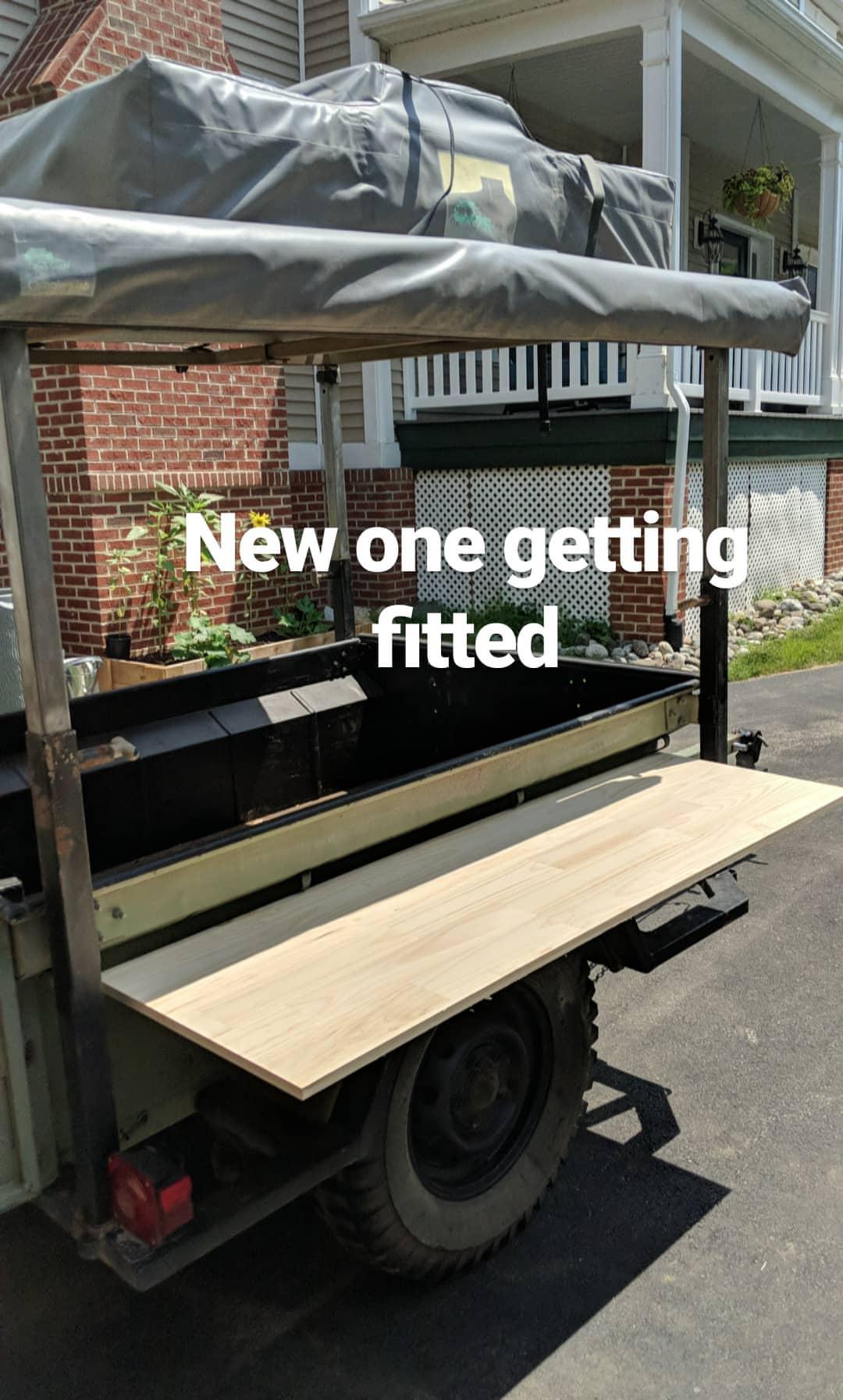 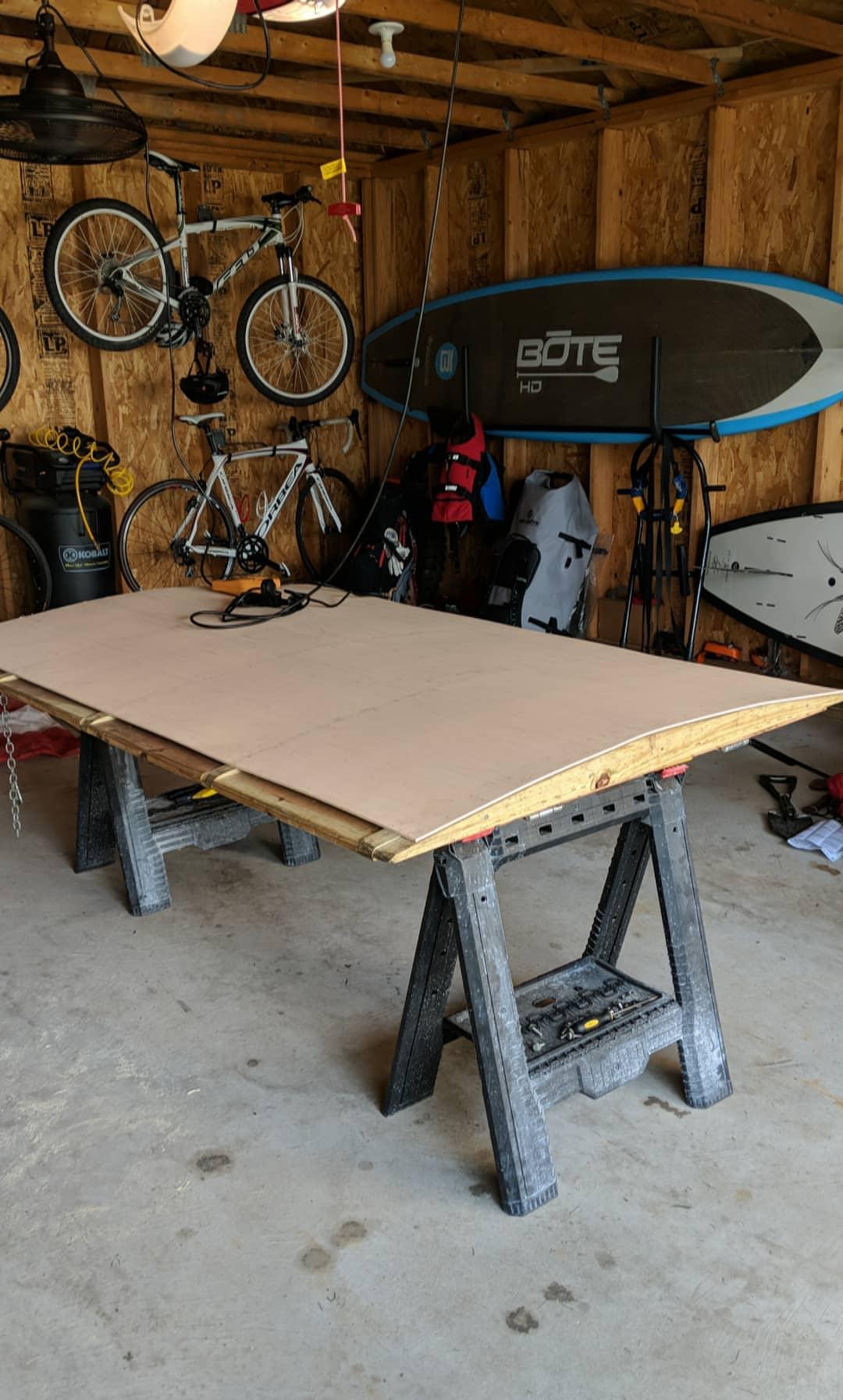 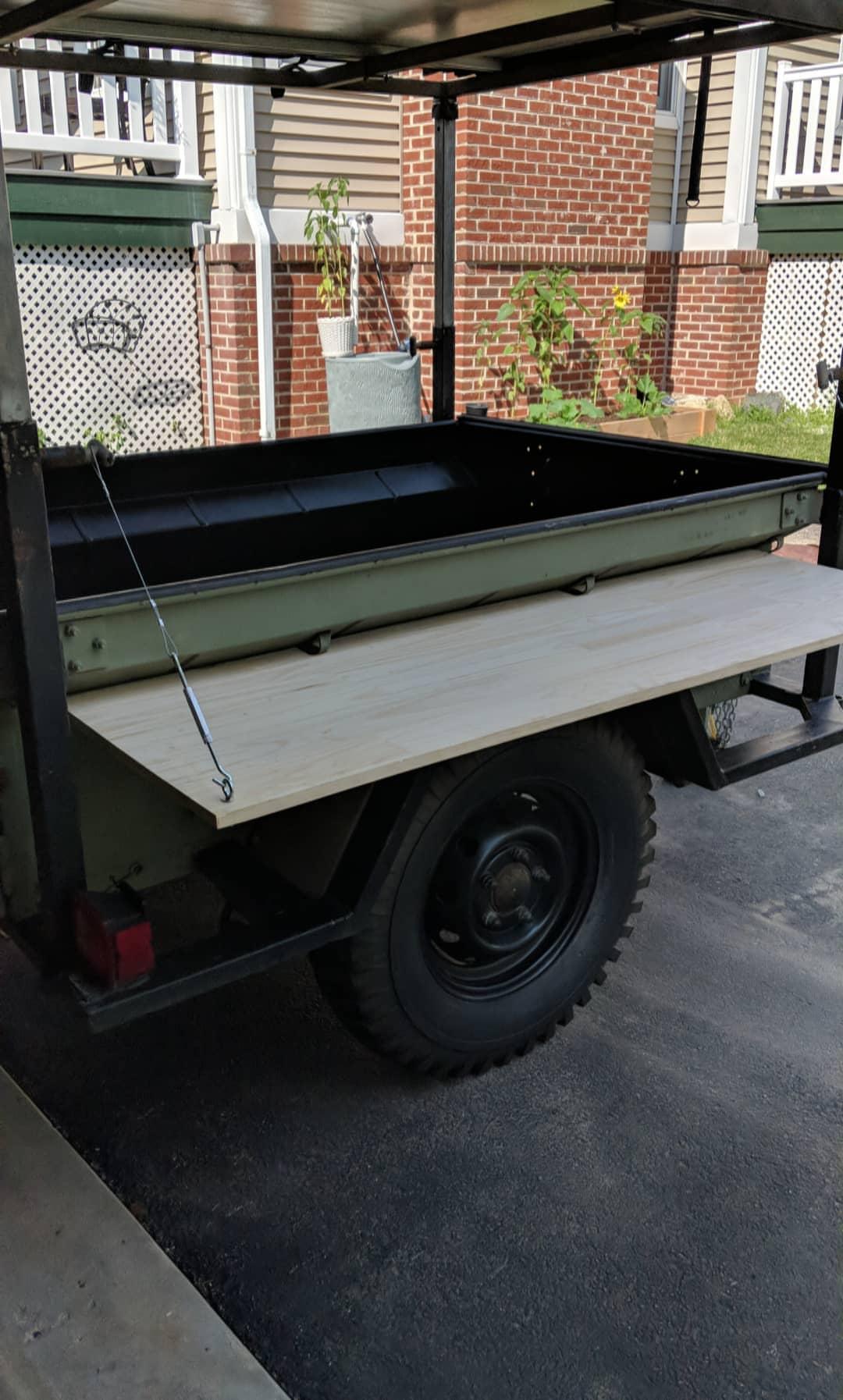 Yesterday at 9:43 AM
Land Caesar