First and Foremost This is a continuation thread of CJ's 1962 FJ40 build - https://forum.ih8mud.com/threads/cjs-1962-fj40-build.354516/ (CJ's 1962 FJ40 Build. With this "build thread" I plan on casually telling the story for the remainder of the build. The goals that I have for this vehicle are as follows: (and will probably be a moving target)


Onto the meat and potatoes of the thread

It only took a Lifetime but I have finally come into posession of my fathers FJ40 that we have been VERY CASUALLY working on for the past lifetime. Now that it is under my care I intend on finishing what we started and return this beauty to the road. 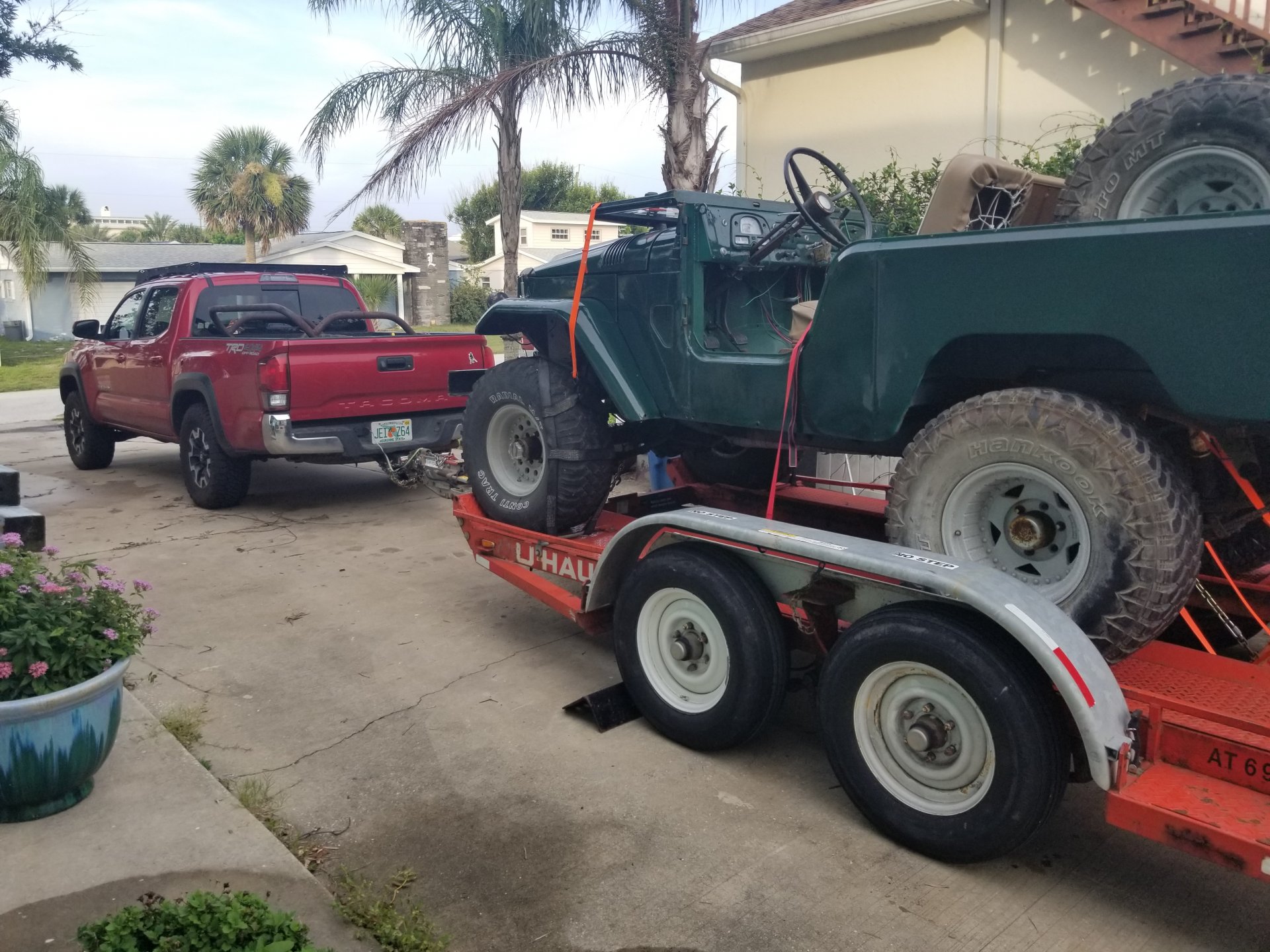 Above is me rescuing the FJ40 from the violent salt spray of coastal florida. Drove about 10 hours to grab it 4th of July weekend 2020. Got it loaded up with 2 sets of tires. both sets were less that adequate but might as well have some spares cause most of them leaked.

After hauling in 10 hours to North Alabama I finally go it dropped off in my garage in an effort to prevent any further rust form forming. (not much rust at this point but better to curb it while its still just surface rust on things such as the axles, BREAK LINES

, and the air filter box. 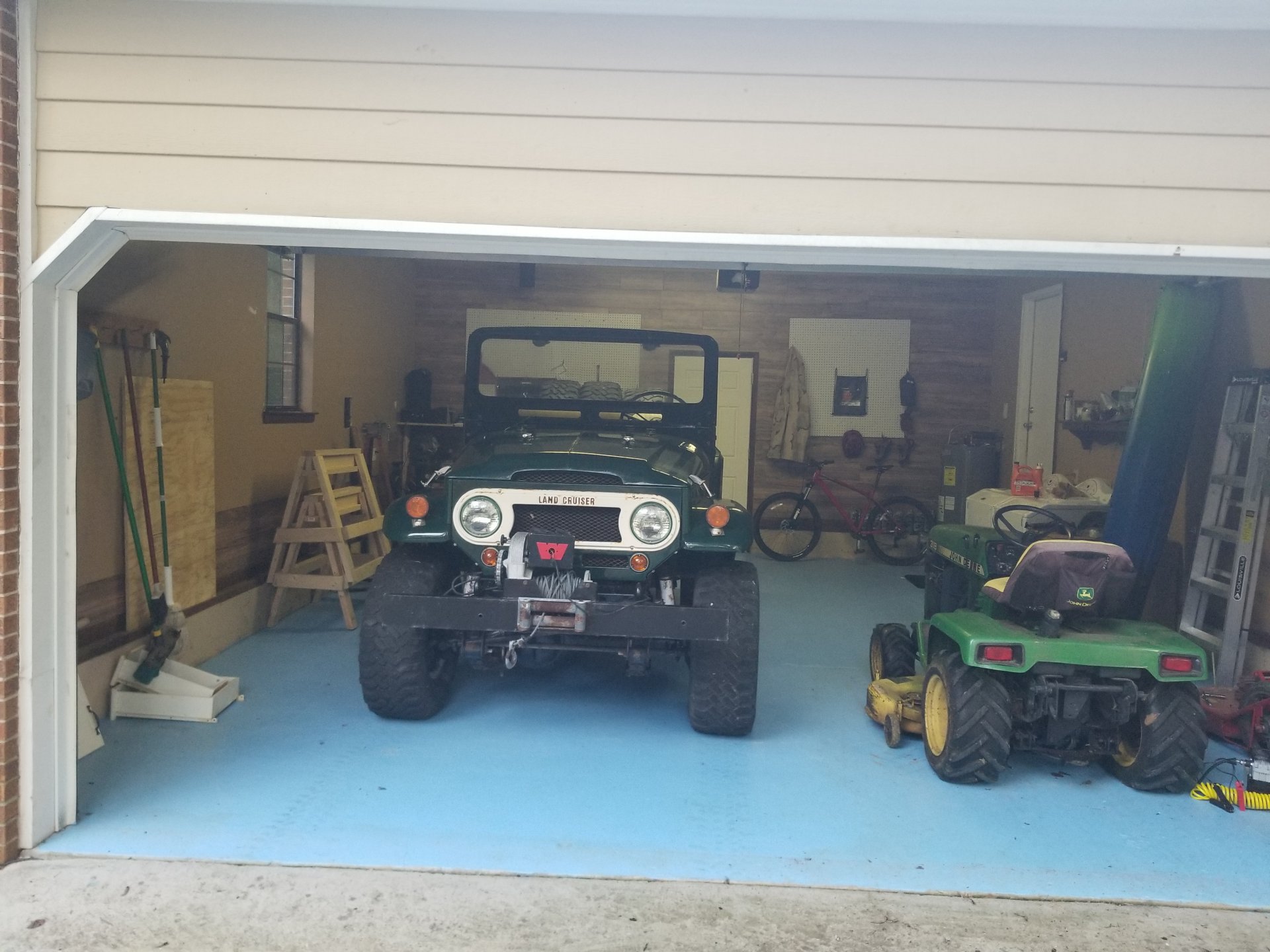 As any long haul with a trailer, it was a terrible experience. But I would do it again in a heart beat to get another FJ40, or my bronco... but picking that up is gonna be a long time coming.
Once getting it to alabama I kinda got really distracted by dating some chick and fixing my house and other dumb life things that get in the way. but I managed to bend new brake lines and put those in, saved up money and got 4 new tires (BFG 33 10.50 AT's) and i cruise around the neighborhood and my back yard raising hell like a good American should.

I spent some time and rewired the winch and ripped a stump out of my back yard (I didnt have an E Brake so I had to daisy chain it to my pickup truck which is out of sight behind the FJ40. then shortly after that decided to yoink my porch off my house. which didn't quite go to plan 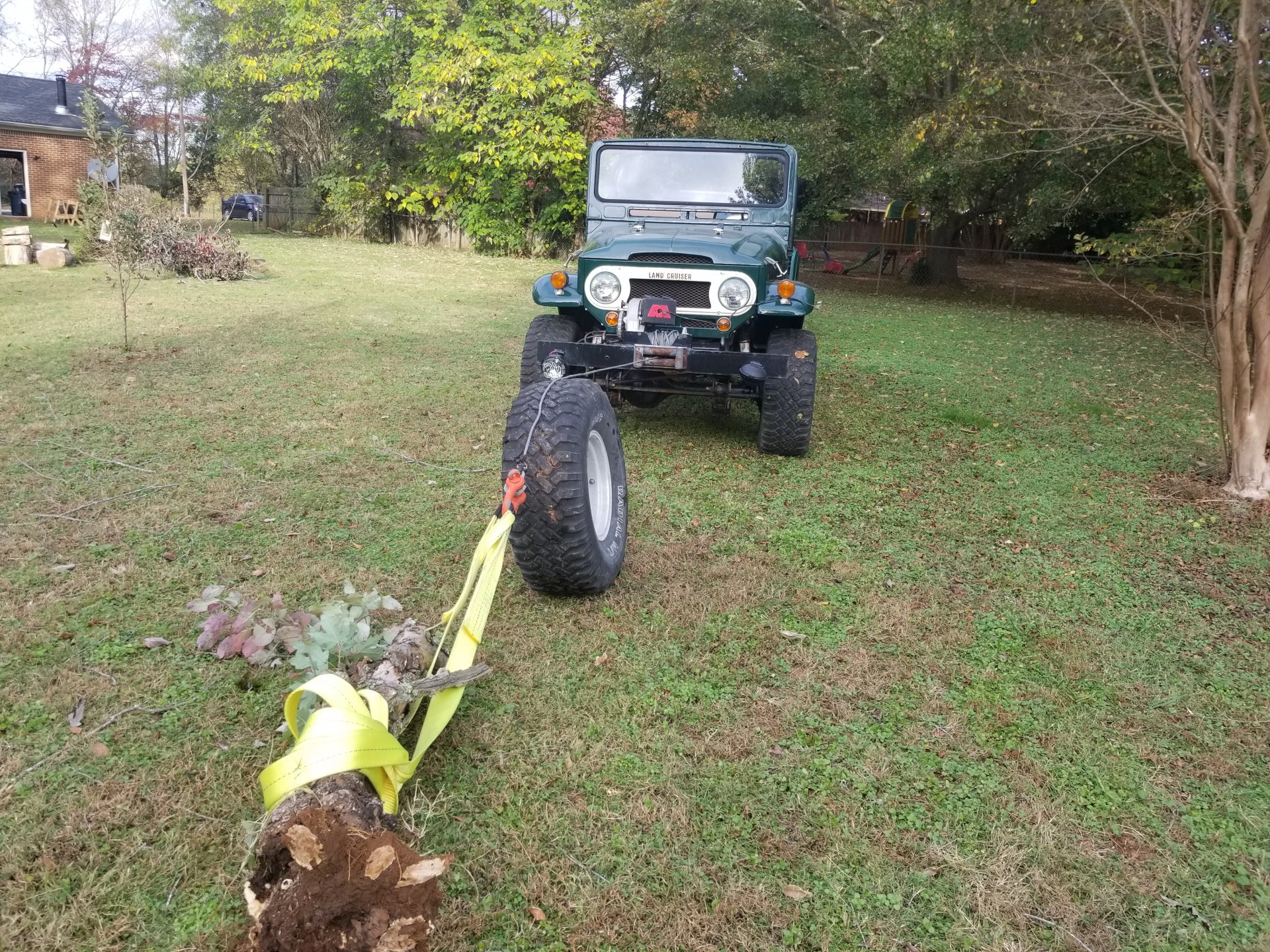 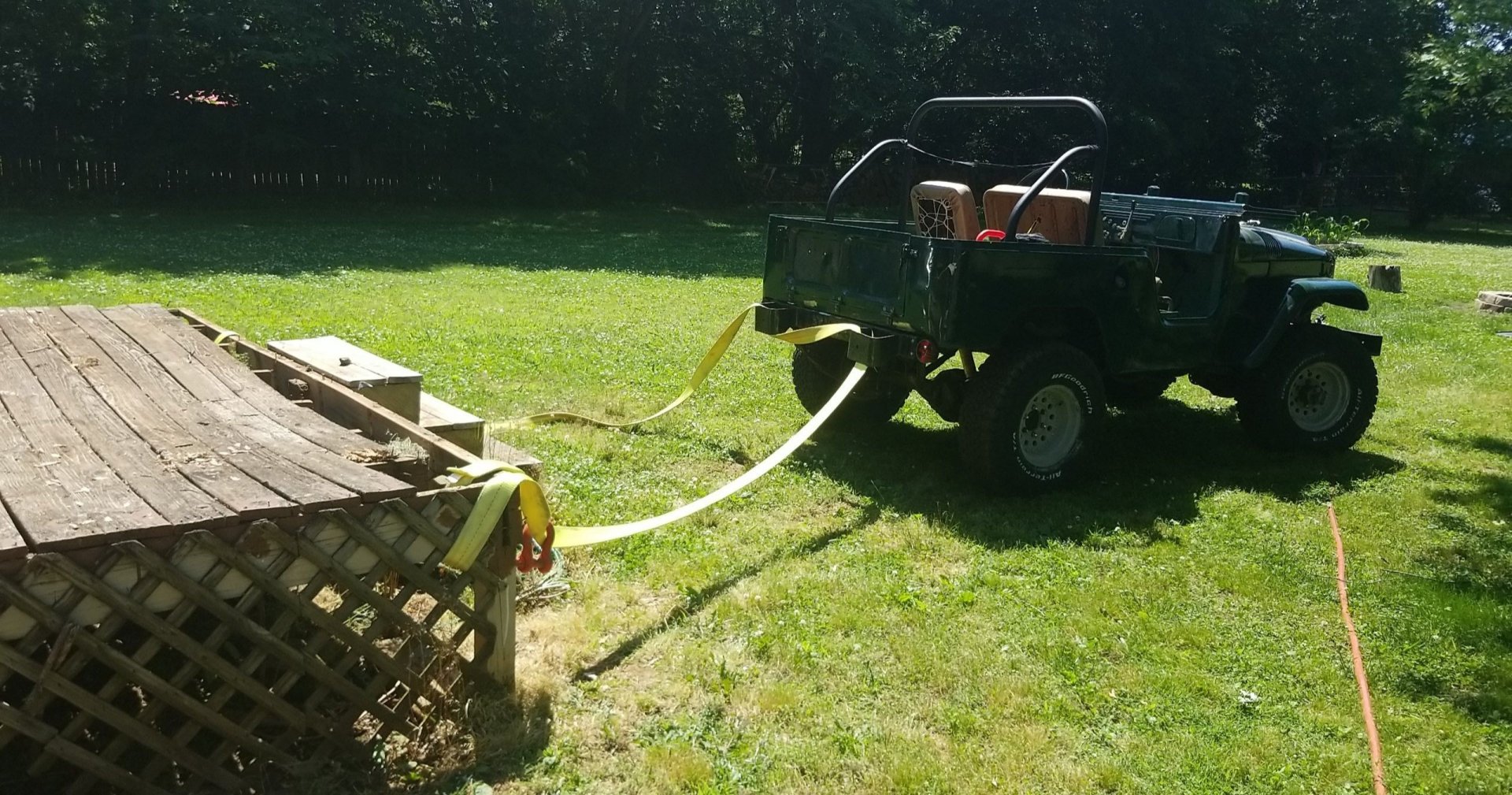 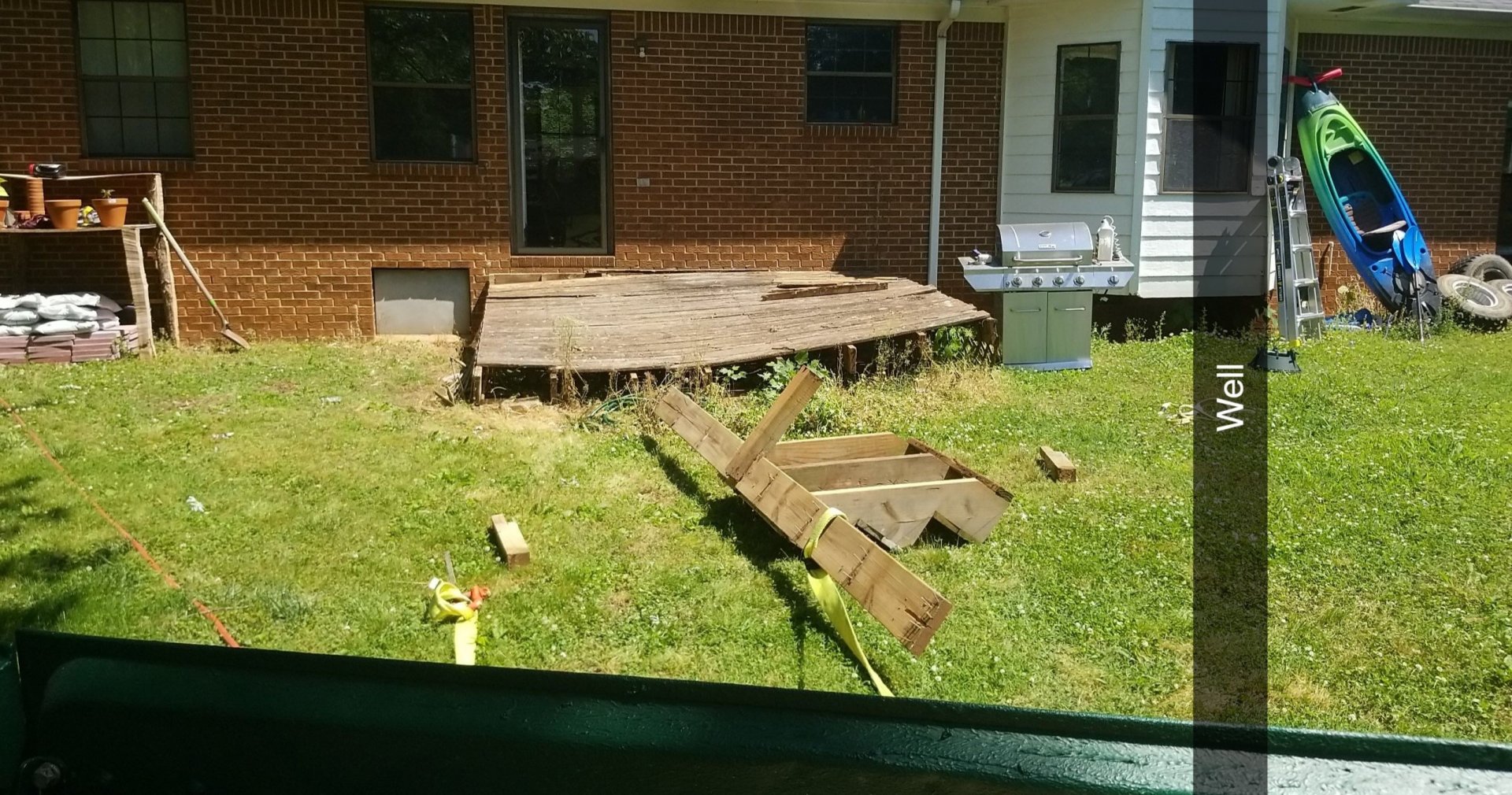 But like all things in life all is well that ends well. From here I played around with some of the various linkages going to the carborator to get better action from the gas peddle, fiddled around with the wiring and had the genious revelation that there was a wire coming from the steering column that controlled the break lights. Following that I got the new tires, and turns out the rims were corroded from years of salt spray air getting pumped into them. So I took them to a local rim shop that refinished the inside of the rim for like 90 bucks. then I got the new tires put back on and have been living the good life of having functional tires.

I guess I can only attach five pictures at a time so ill get jiggy with another entry with pictures when its relevant. But to continue my story in the fewest words possible... I got the tires, put them on, added space grade paint into the windshield frame (dont ask), had a 2 light license plate holder wondered what the hell was going on cause it had 3 bolt holes and my drop gate had 4. So i built a wood adapter wired in the plate holder and said good enough, proceeded to add a roll bar because aint nobody want an fj40 sitting on their corpse if they roll. Did a few other piddly things and now Im getting ready for another cross country move. So ill have to take a break working on the FJ and hit it hard once I get it settled into my new place. But in the few weeks I have left here in alabama I plan on trying to work on it and just detailing on here what ive done. more so for myself, but i am open minded to sharing my adventures with other folks
You must log in or register to reply here.