Planning to install OEM strut spacers this weekend and had a couple questions on the front strut removal and reinstall. Searched and read a bunch of super helpful threads and apologize in advance if any of these are duplicative but had a few outstanding questions:

Sockets/wrenches: I have metric sockets up to 22mm (and a ½” drive breaker bar). Which larger sockets are needed? Think I saw 24mm. Any others? 39mm isn’t need for this right?

Loctite: saw recommendation to put it on bolts when reinstalling – do people use the red type?

Ball joint tool: do I need one? Since I’m not replacing UCA, assuming I can just loosen the connection with wrench/hammer not fully remove. But maybe need it to disconnect the steering tie rod end?

Planning to use the factory bottle jack to get the front end on jack stands. Any reason I need to have more than one jack on hand (to support stuff, line up bolts, etc)?

Fingers crossed I can get the second KDSS shutter valve screw to move…been working on them for a while now with penetrant, wire wheel, tapping, cursing, voodoo…and one is spinning freely now but the other is stubborn. Snapped off a harbor freight hex socket (but thankfully got it out cleanly), and twisted a Duralast one but caught it before snapping. Ordered a set of hex sockets made by VIM – hopefully stronger. We’ll see.

Thanks in advance for any feedback!

@Trollhole would know this stuff off the top of his head I'd bet.

I'll go through what I know about the questions in order:
1. Don't know (I know that's no help), but let me look through my FSM. I'll get back to you if no one beats me to it.
2. That should be in the FSM. Loctite's secret sauces are pretty specific, and I know most people don't care, but there really is a difference in the products.
3. Don't think so, but again the FSM should say one way or the other.
4. As a general rule, I never use a jack for anything but lifting, and I never work under, or near if I can help it, a suspended load. I have a 3-ton floor jack and jackstands and you're welcome to them. PM me.
5. Good luck. (you didn't ask for any, but what the Hell, it's free)

Thanks! And appreciate the safety guidance on jacks. I have a set of 12 ton jack stands that will be supporting the weight of the vehicle.

My recommendation based on pulling struts a time or two:
jack up the front of the truck and put it on jack stands. remove the wheels, take a sharpie and mark the locations of the lower control arm cam adjusting nuts. Loosen, do not remove, the bolts/nut on the cam adjusters. I think this requires a 24mm. could use an adjustable to loosen, but would recommend socket and wrench to tighten back up.
remove the two bolts at the bottom of the lower ball joint. 19mm I believe. This will allow the lower control arm to drop low enough to expose the screws on the top of the strut.
Place a floor jack under the lower control arm, just high enough to hold the weight of the assembly.
remove the 3 nuts on top of the strut tower (13mm maybe) now use the floor jack to lower the strut/lower control arm in a controlled manner.
finagle the strut out of the bucket and place the spacer on top. finagle the strut back into the bucket and using the jack, raise the strut until you can start the 4 nuts on the top.
replace the two bolts on the lower ball joint and torque to ___ ft lbs (check that with FSM)
line up the cam adjusters on the lower control arm. use a wrench to hold it in place and tighten. Torque to values in FSM

once done get an alignment. 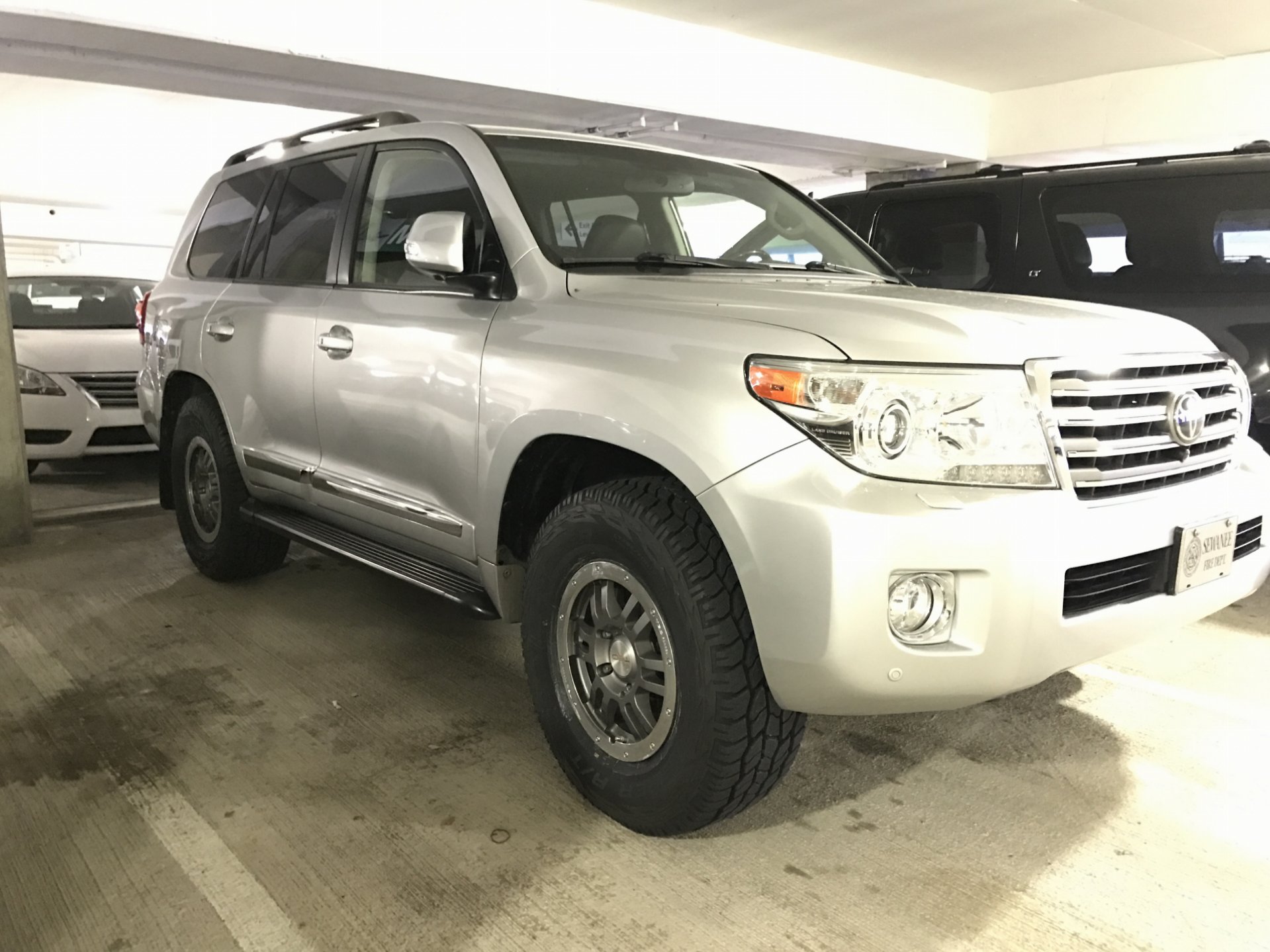 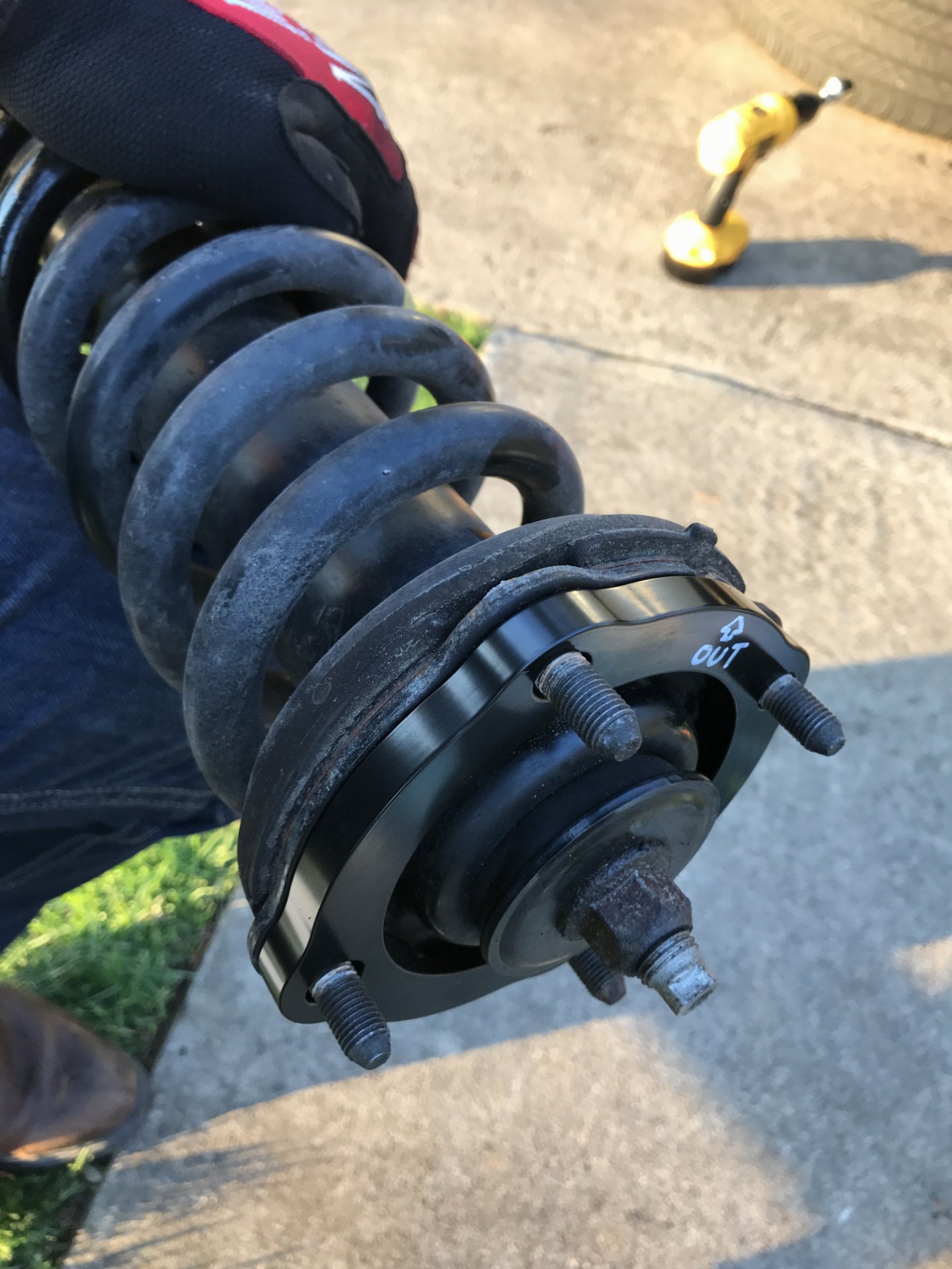 Thanks again for the help and guidance on this. Super helpful. And the tasty beverage(s) were critical.

KDSS was the biggest pain overall. Second screw ended up stripping out completely. JB Weld kwik welded hex bit didn't hold (probably due to my impatience), so ended up hammering in a torx bit and it worked. My thought is the aggressive hammering may have busted loose the threads... But who knows.

Got the 295/70/17 Cooper AT3's on RW's mounted up and I'm thrilled with the outcome. Minimal rubbing in reverse with mud flaps removed. Haven't had a chance to fully stuff the tires and check clearance but seems good to go for normal driving. Traveling now but will measure real world mounted diameter etc and post when back.

Nice work! I was also going to offer up any jacks/tools you may need. Now I may call on you for your help since you are local and all!
N

I was going to suggest using a mini blow torch on the stuck KDSS bolt. Repeated heating and cooling works great on breaking free stuck rusted bolts. The two pieces of metal will expand and contract at slightly different rates at the union causing them to break free.

NLScooby said:
Nice work! I was also going to offer up any jacks/tools you may need. Now I may call on you for your help since you are local and all!
Click to expand...

Sure thing! Happy to help.
N

texAZ / turns earned - I'm about to install same spacers in my 2017. A couple of questions came up after reading this (and other) post, as well as scoping the job out yesterday.

1) using the approach noted above, did you guys have to remove the sway bar links? I only need to expose the top of the strut to get the spacers on. I had a hard time yesterday getting the sway bar link to line up. KDSS bolts are not seized and will be loosened exactly 3 turns.

2) did you guys loosen the LCA bolts before or after raising the vehicle? I tried loosening them yesterday after it was raised and couldn't get them to budge. New vehicle with no rust. I may have been trying to loosen the bolt head vs nut though.

3) which side did you loosen the LCA bolts from (i.e. from the inside of the LCA "triangle" or from the outside)? Coming from the Jeep world, I don't have a lot of experience working with the cam bolts on IFSs. I want to ask the stupid question to make sure I'm trying to break loose the correct part.

4) any idea what the torque values are for the two spindle/knuckle bolts? And LCA bolts?


Thanks in advance. Pretty basic questions, but I hoping to tap into first hand experience to make it go as smooth as possible.

Thanks texAZ. Much appreciated. With those torque values, I definitely need to pick up a breaker bar!

What size are the OEM spacers'? If used in conjunction with an adjustable suspension, could one get more lift, while keeping the preload turned down? Will the OEM spacers partnered with a mild spring lift still require aftermarket UCA's?

10mm, and yes. The UCA's will depend on total lift, search and you'll find plenty on the topic. 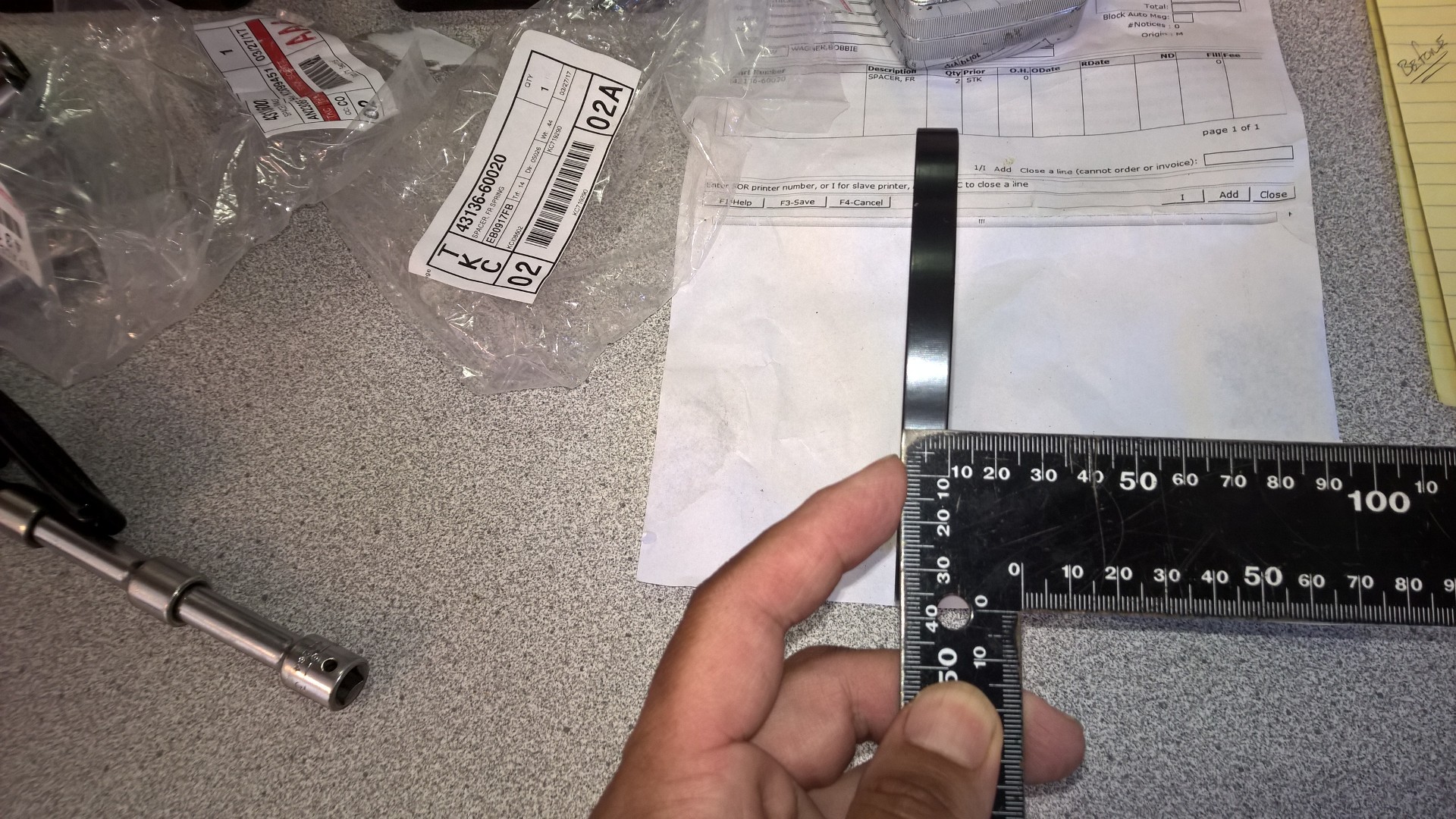 A lot of the trucks running over 3" of lift use the spacers to get extra height without adding too much preload to the springs.
The spacers are 10mm and yield about 3/4" lift.

Any lift over 2 1/2" will require upper control arms to get the alignment within specs.
N

I'm planning to do this to the LX. Everything is pretty much the same except that I have to disconnect the hydraulic line from the shocks. I've search but I don't think there are any DIYs about replacing one of the hydraulic shocks.

I just got through installing the spacers on my 2014 LC. Rented a torque wrench from Autozone (free!) and it took me about 3.5 hrs from start to finish working in my gravel driveway with no power tools, which I cannot recommend.

One lesson learned that may help others out:
On the passenger side I could not get the LCA to droop low enough even with the KDSS screws opened 3 turns each, so I loosened up the sway bar frame bracket as much as I could without the bolts coming out and this gave *just* enough droop to remove and reinstall the strut. The driver side was not much of an issue, though I did have to jump on both LCA's to get them low enough.

Next up are tires and Firestone airbags!