Please forgive me for posting across multiple forums. I'm new here working off the advice of experienced users; I hope it's OK.

My 1987 FJ60 was stolen sometime on the night of June 17 from the street in front of my house in Echo Park. The Mini next to it was worth 4 times as much, but I guess they knew what they wanted.

It's brown with sun damage to the paint on the hood and roof. The rear windows have dark tint on them. It's lifted a few inches on a Specter heavy duty suspension. It has around 190,000 miles on it, a 5 speed manual transmission, and a bunch of other quirks as we all know and love. 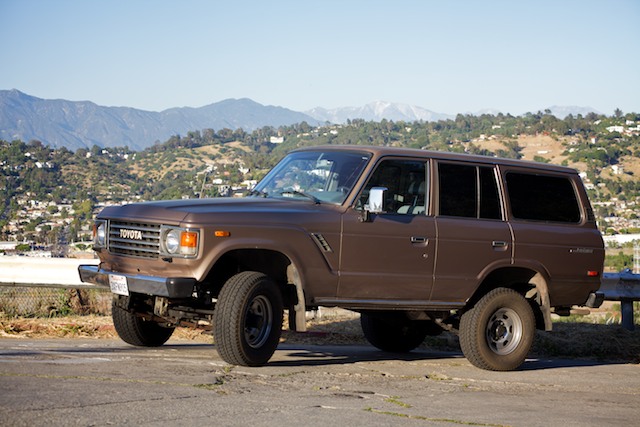 That blows, hope you recover it.
Scott

...One Landcruiser at a time

Sorry to hear about that. Sounds like joy-riders took it just because they could. Mini's are harder to steal.

I'd look at off-highway places around here where they might dump it when they got tired of driving it.

I'm over on the westside, but I'll keep my eye out. Sucks man.
Brad

Happy ending / Call off the dogs

This afternoon the Pasadena Police Department called to say they'd found my truck in a Food 4 Less parking lot about 12 miles from where it was stolen. The officer waited the half hour it took me to get there so I could avoid the expense of towing and impound. No one was particularly interested in dusting anything for prints, least of all me.

The radio and battery were missing, along with a bunch of tools and things (jumper cables, tow strap, etc.) but otherwise it's fine. No dents, dings, broken glass, or forced locks. No mud on it. I bought a new battery (all the parts of the battery tie-down were kindly left where they would be easy to find) and drove it home.

The truck was stolen sometime Friday night / Saturday morning, and first noticed in the parking lot when the security guard showed up at 10AM on Sunday. For bureaucratic reasons that did not impress the Police officer the security guard waited a couple days before he called it in.

Had it been dumped one aisle over it would have been on camera. The security guard credits this to the sophistication of the thieves, but it seems more like luck to me.

So I guess they stole it for the battery and radio, and so they could rifle through my glove compartment at their leisure, and then they dumped it where they knew it would be found.

Now it's time to work on that kill switch.

Glad to hear you got it back without much damage. I have pulled the EFI fuse a few times when I was out of town and left my 80 on the street, but it would be nice to have a good simple and easy to use kill switch. Post what you come up with.
'94 FZJ80 - SC w/7th injector and Big Brakes Its got a few dents and lots of miles
N6TOY

...One Landcruiser at a time

lostbaby said:
No one was particularly interested in dusting anything for prints, least of all me.
Click to expand...


Glad you got it back mostly intact.

I dont think the police do very much detective work, or only do it for violent crime and VIPs. Stolen cars, stolen personal property, burglary, etc doesnt really get very much attention. In the last two months I filed a "hit and run" on the cruiser and a stolen bicycle. Both times the police officer said its basically for insurance purposes because they dont do anything with the info. My neighbor who was burglarized said it was the same except that they actually came to the house. Kind of a bummer.
Brad

And good luck with the insurance co! We need to have a ihmud in. co. MIke
Mike Hanson

Lostbaby, we are part of an elite club. Both our trucks were stolen and found days later and close to home. Congrats!!
Land Cruiser solutions you didn't know you needed.
Absolute-Wits-End.com

Man that sucks it was stolen in the first place..., but is good to hear you recovered it slightly molested at the same time.

Did they hotwire it or break the ignition?

A few years back thieves tried to steal my Heep XJ, the broke the steering wheel locking mechanism and slide hammered the ignition... if it wasn't for a bad starter they would have gotten away with it.
Copper State Cruisers #234
97 FZJ80 (Moonglow Pearl) OME-J springs + Frt 1" Slee spacer / ARB Frt Bump'r / Sean Huston Fab Rear Bumper w. dual swingouts
You must log in or register to reply here.

Parting a 96 FJ80 for Local buyers only. Location is in Los Angeles area.

T
Would Anyone in the LA Area be Able to Store my 80 for a Few Months?