I'm starting this thread as a way for me to document everything I've done to my 60. I’ve been meaning to do this for a while, so the first few posts will just be bringing it up to speed. I've had her just about a year now and have done a few things here and there to make her a reliable daily driver and suit my needs.

Back Story:
The truck was originally purchased in Virginia. I have the original purchase ticket for it somewhere in a huge folder of documents and receipts – I’ll post a picture of it if I find it. The original owner drove it until 2012. In 2005, the truck had about 200k miles and the owner had a new 2F long block the engine rebuilt with a brand new short block as well as added a refurbished H55F transmission, headers, custom exhaust, full OME suspension, a roof rack, and 33” tires installed. The truck was sold in 2012 to a military couple in Georgetown. It was the wife’s daily driver and she was driving it to Fort Hood and back every day for work (about 45 miles one way). They had the OME suspension and roof rack removed and had some new [lower] springs installed and 31” Michelins installed along with several maintenance items taken care of (which I’m finding out weren’t done very well.) They also installed an ungodly sound system (two 12” subs, focal speakers, amps, capacitors, etc.) The husband wasn’t fond of the truck - he was more of a “luxury car kind of guy”. His words. Anyways, he sold it for her while she was in Japan. She was aware of what was happening, but she didn’t seem happy about it. She had named the truck “Sherman” because it reminded her of the old WWII M4 Sherman tanks. I thought that was pretty bad ass, but I prefer women’s names for my vehicles. It’s weird to have a love affair with something with a man’s name… so, I modified it to Shirley.

Here it is the day I bought it: 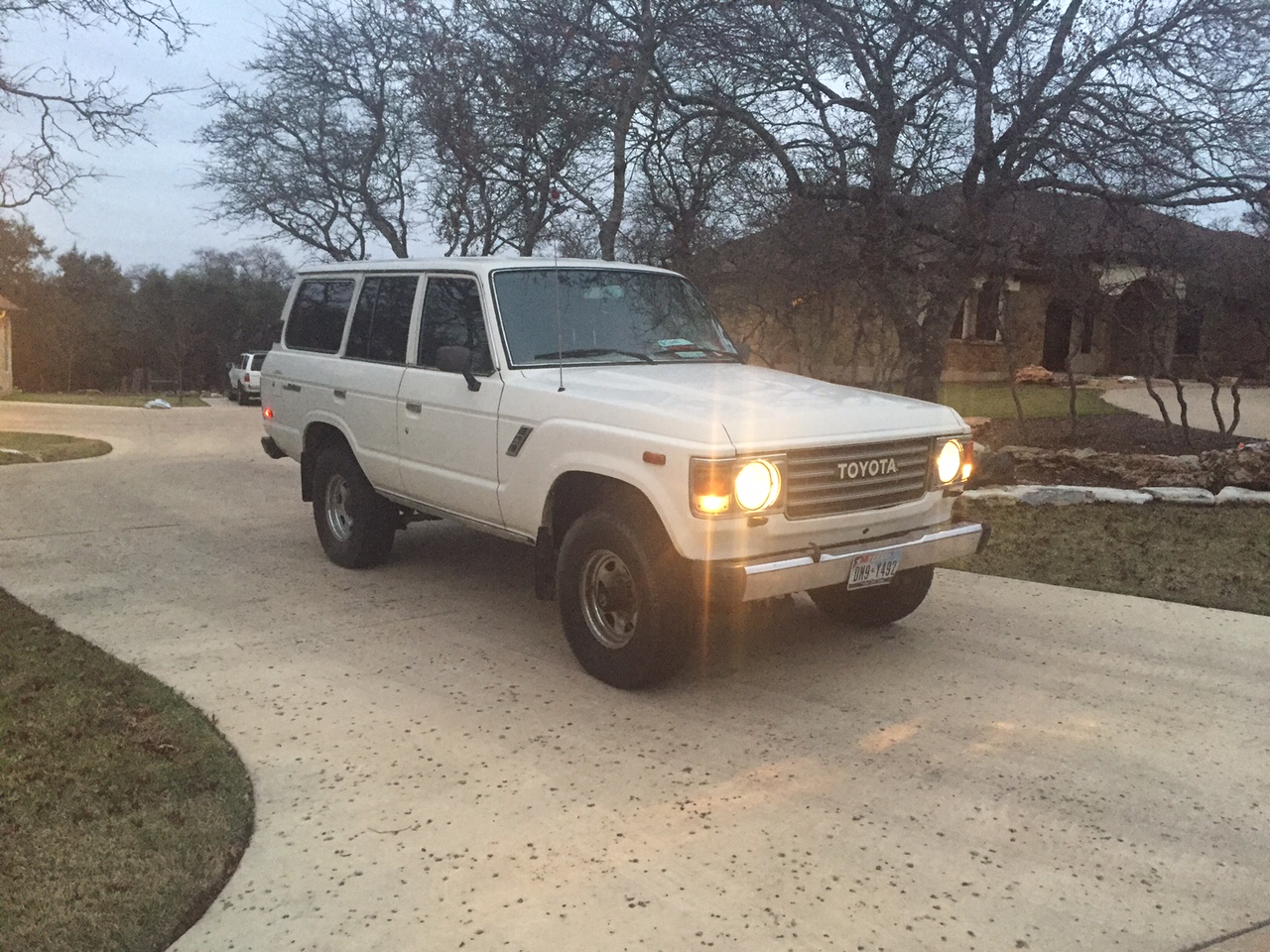 What I’ve done so far:

Here's how she sits today: 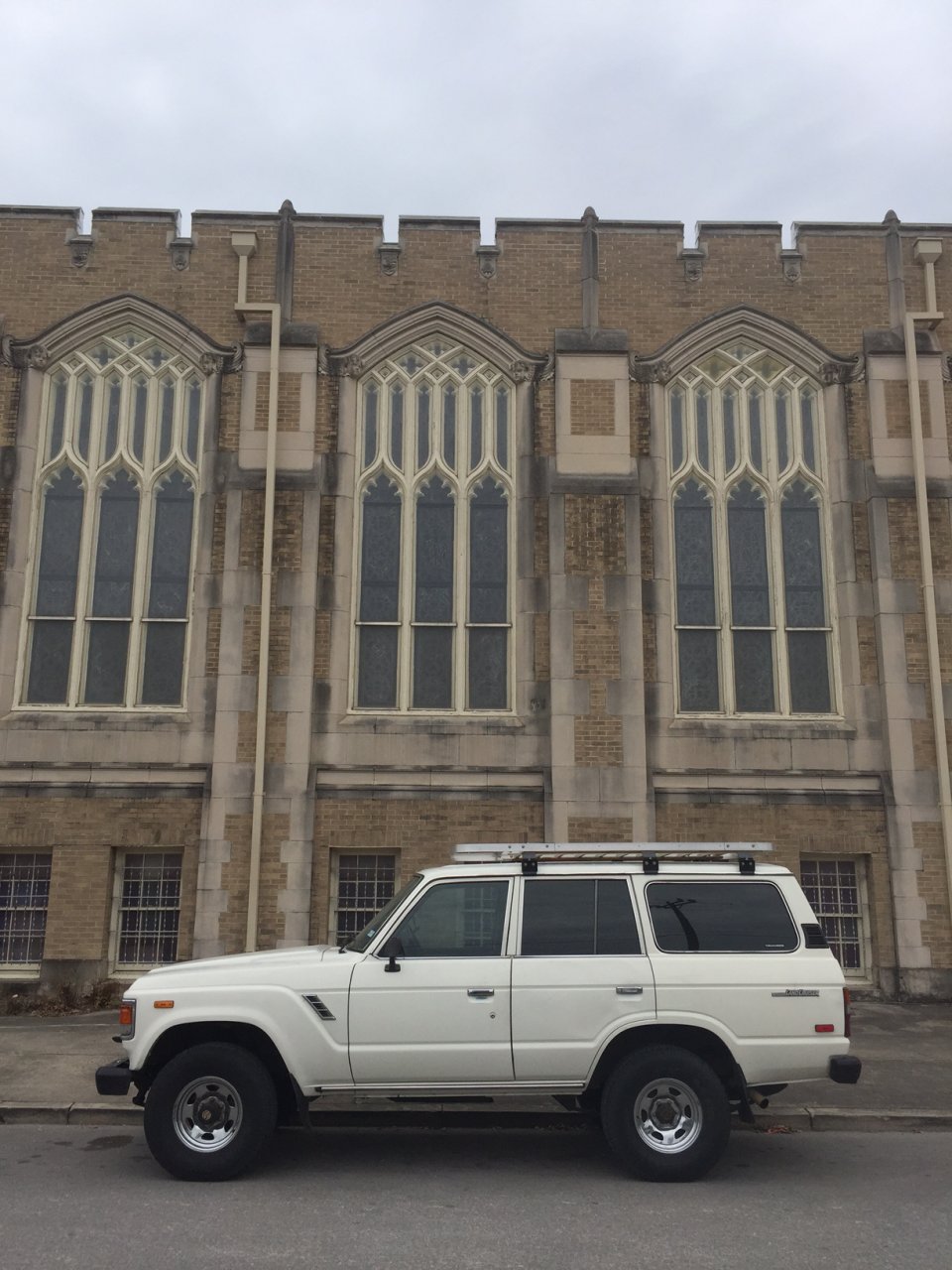 The original carb came off today. Trollhole carb going in! I'll rebuild the old carb and keep it as a spare.

Any "while I'm in there" items I should take care? 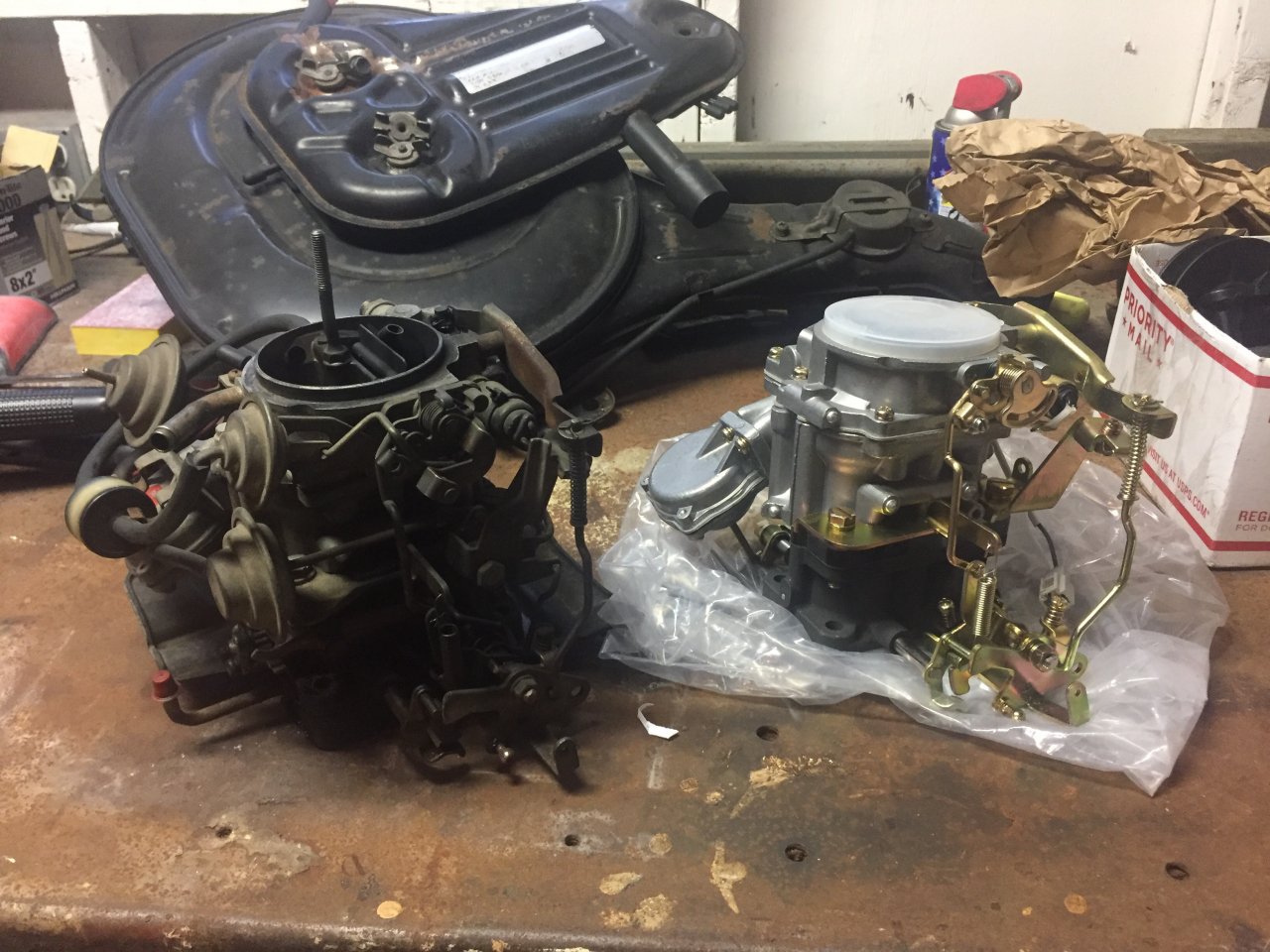 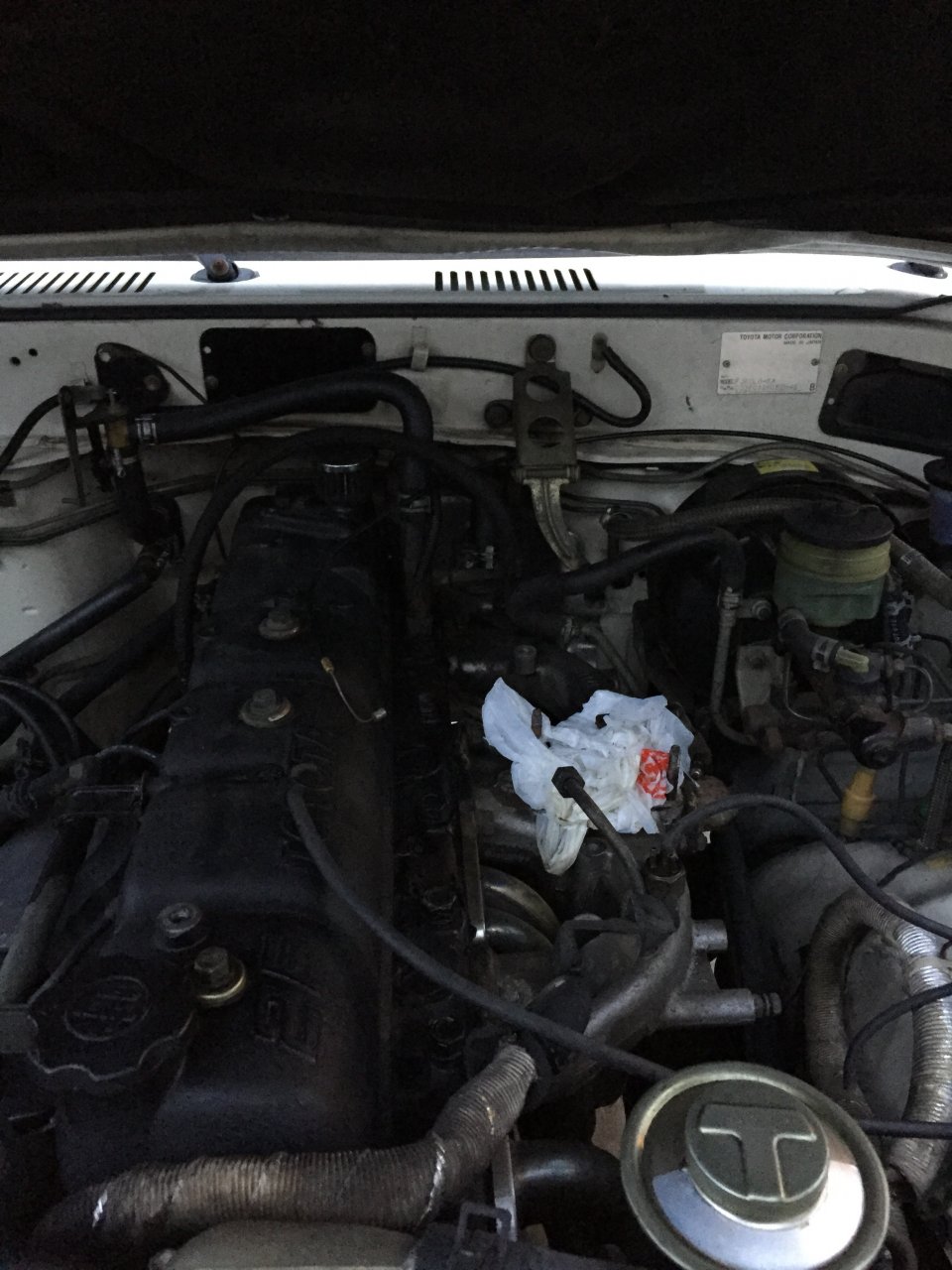 Very nice dude! Looks like a great truck and jealous of the 5spd!
Check the manifold to ensure there are no cracks or anything at the bottom of the carb/heat riser/egr thingy. Replace all vacuum lines that you can with new stuff. Take the valve cover off and adjust the valve lash (do it cold, so much easier and add .02 to the stock specs from the FSMs). Salvage the AC Idle Up (front of carb) and place on the Trollhole for your AC.
BeBe - '85 FJ60 146934 miles, desmogged, and stock for now (SOLD)
FSM's for FJ6x series and HERE
Alita - '98 Storm Cruiser
KJ7VFQ
Cool kids drive those 4 door jeep thingies... knuckleheads and animal-spirits drive Land Cruisers.
What's your power animal?

I'm making a list of everything I need to finish my carb install and other things I want to get done while I've got it off. I have some questions: 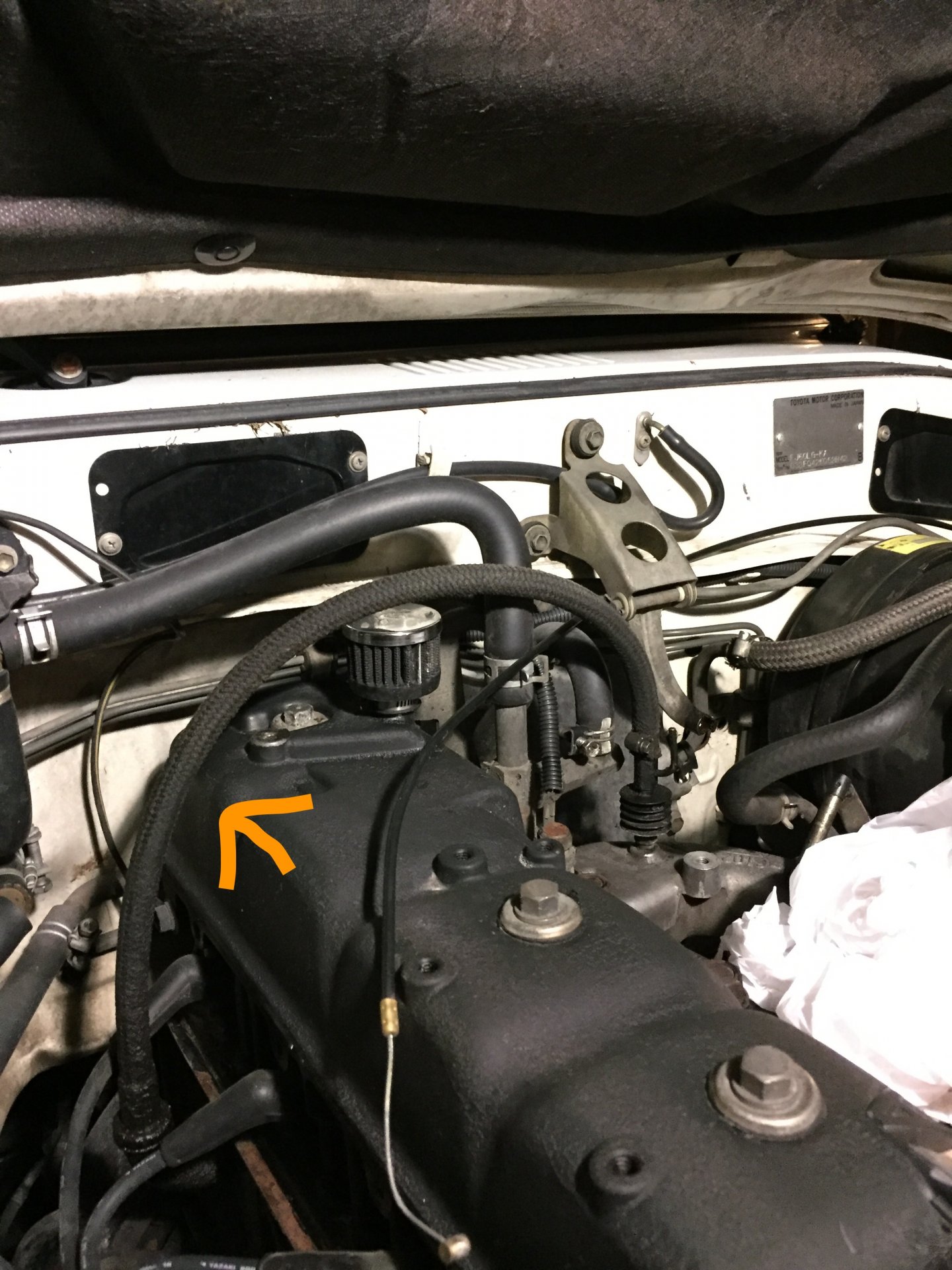 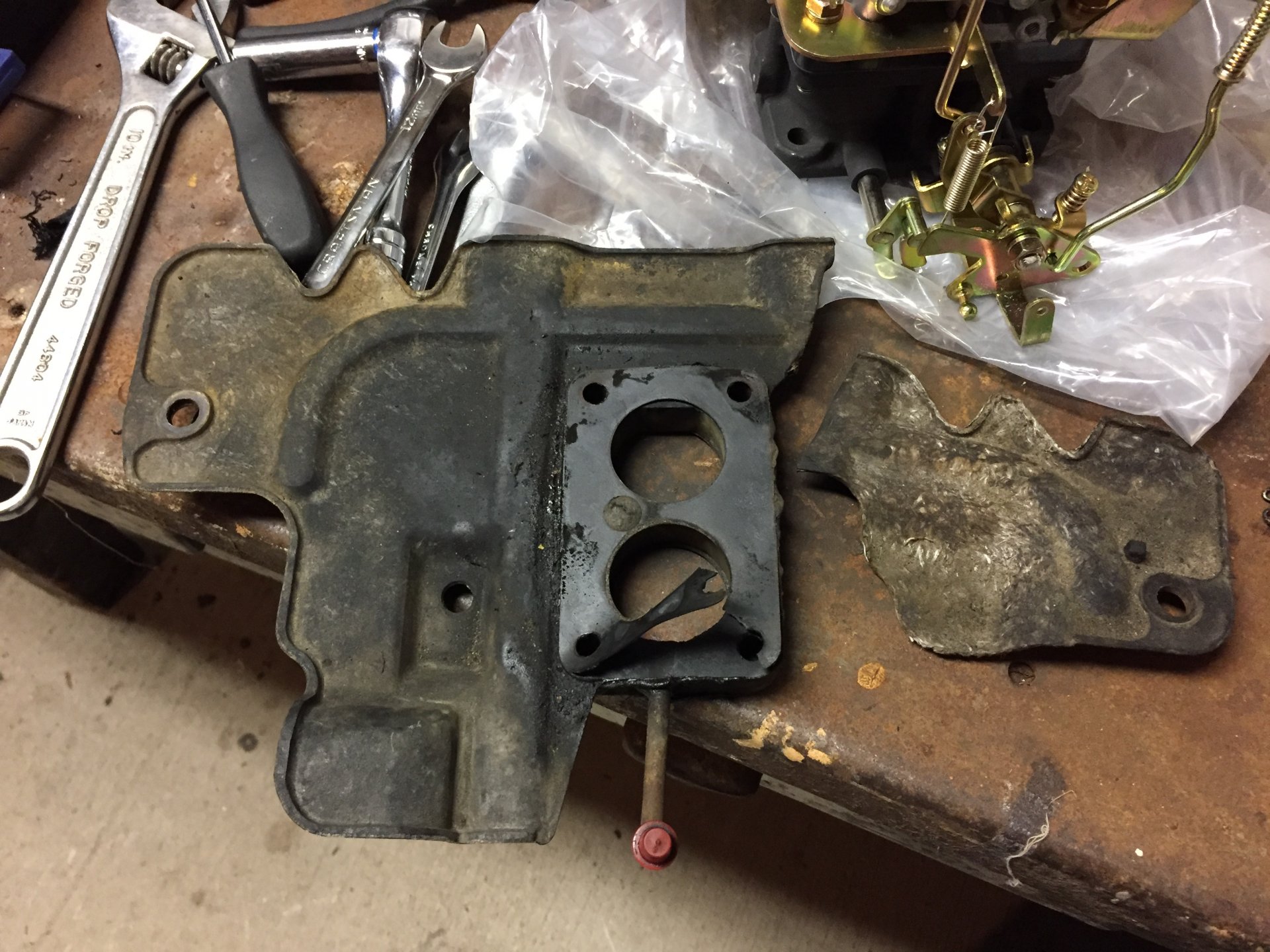 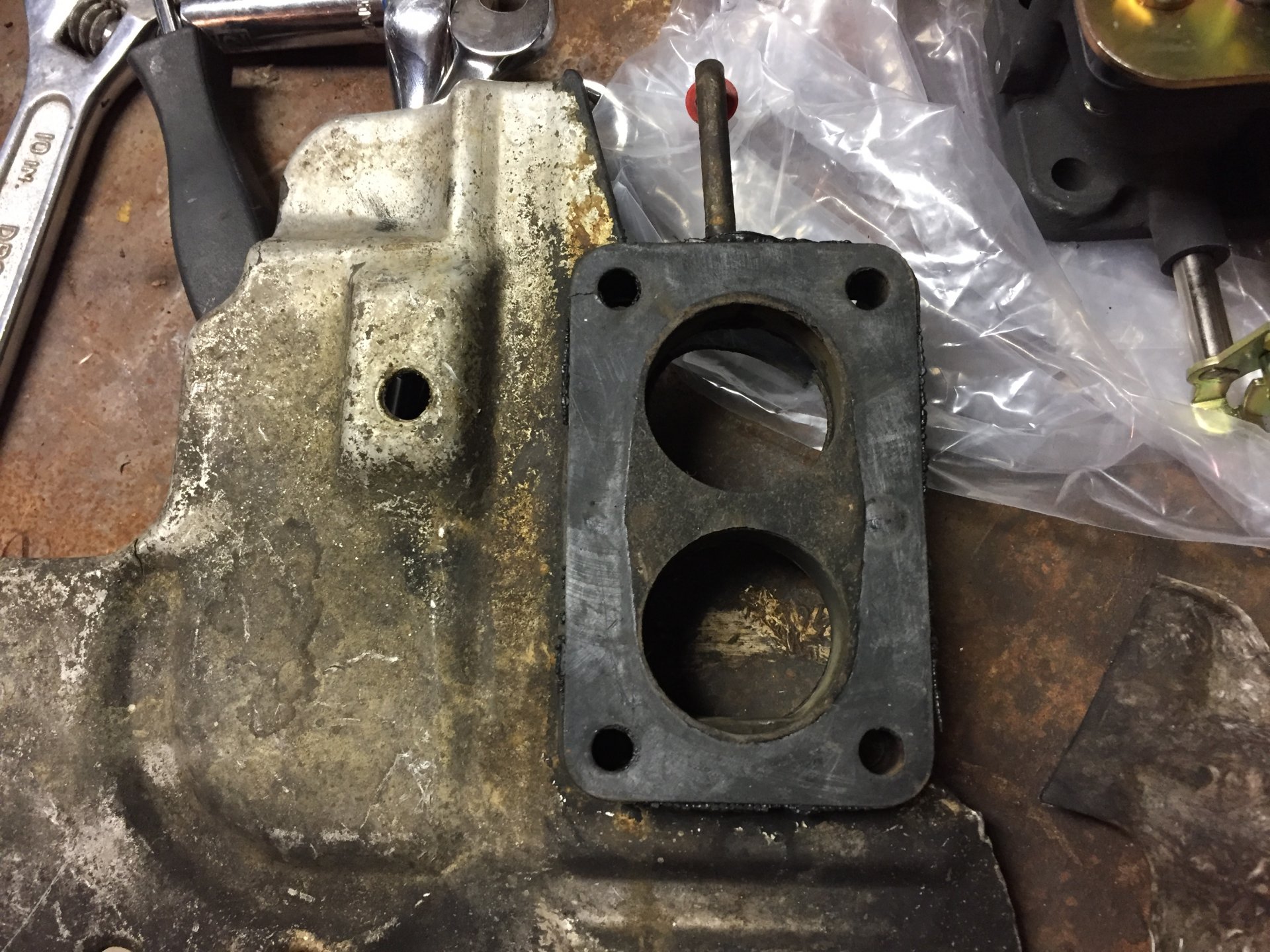 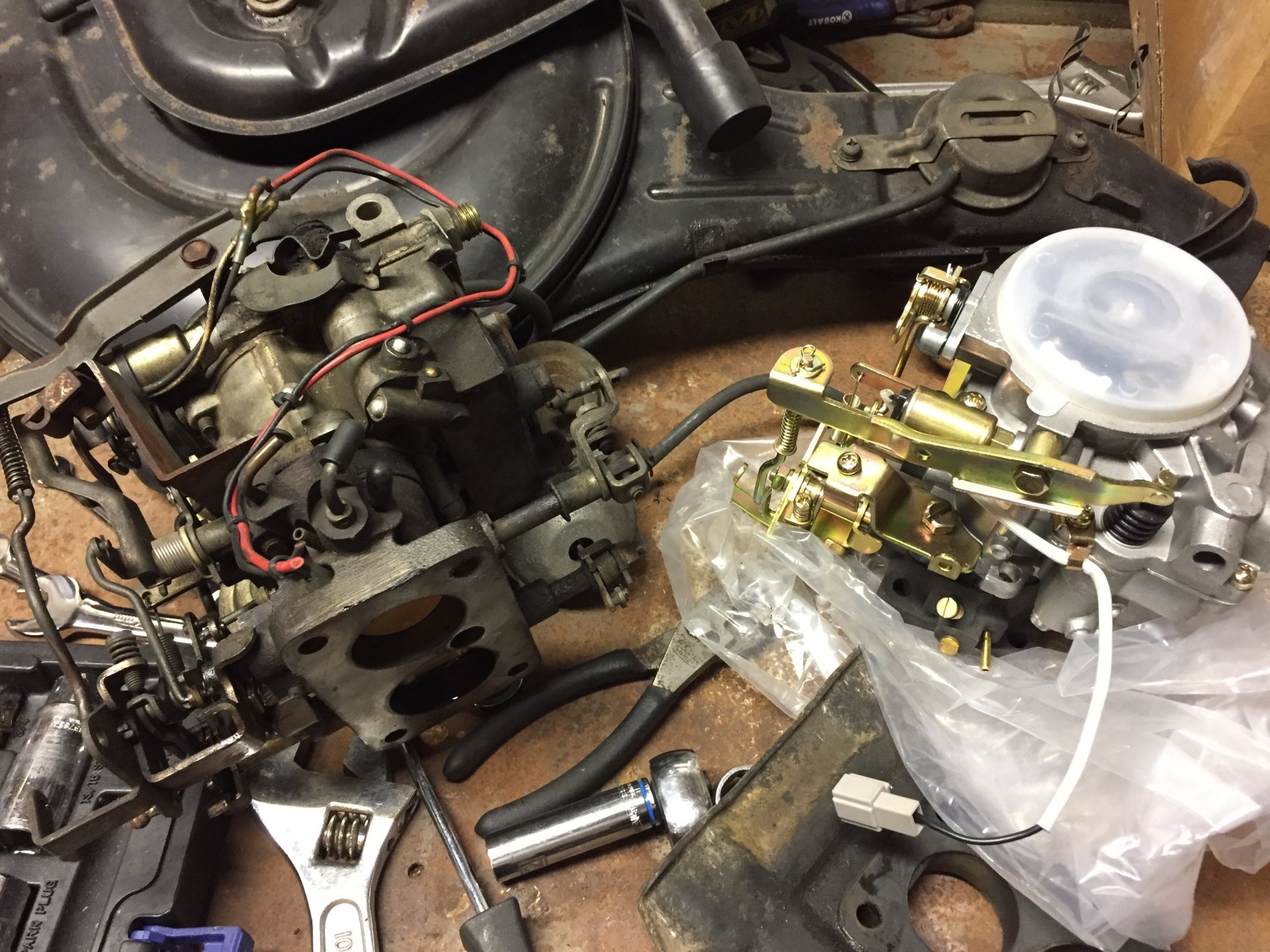 I'll also be doing a valve job, new valve cover gasket, replacing what hoses are left, and salvaging the a/c idle up per @gregnash 's suggestion. Am I missing anything?? Here's a quick picture of the whole engine bay. Does anything crazy stick out to anyone? 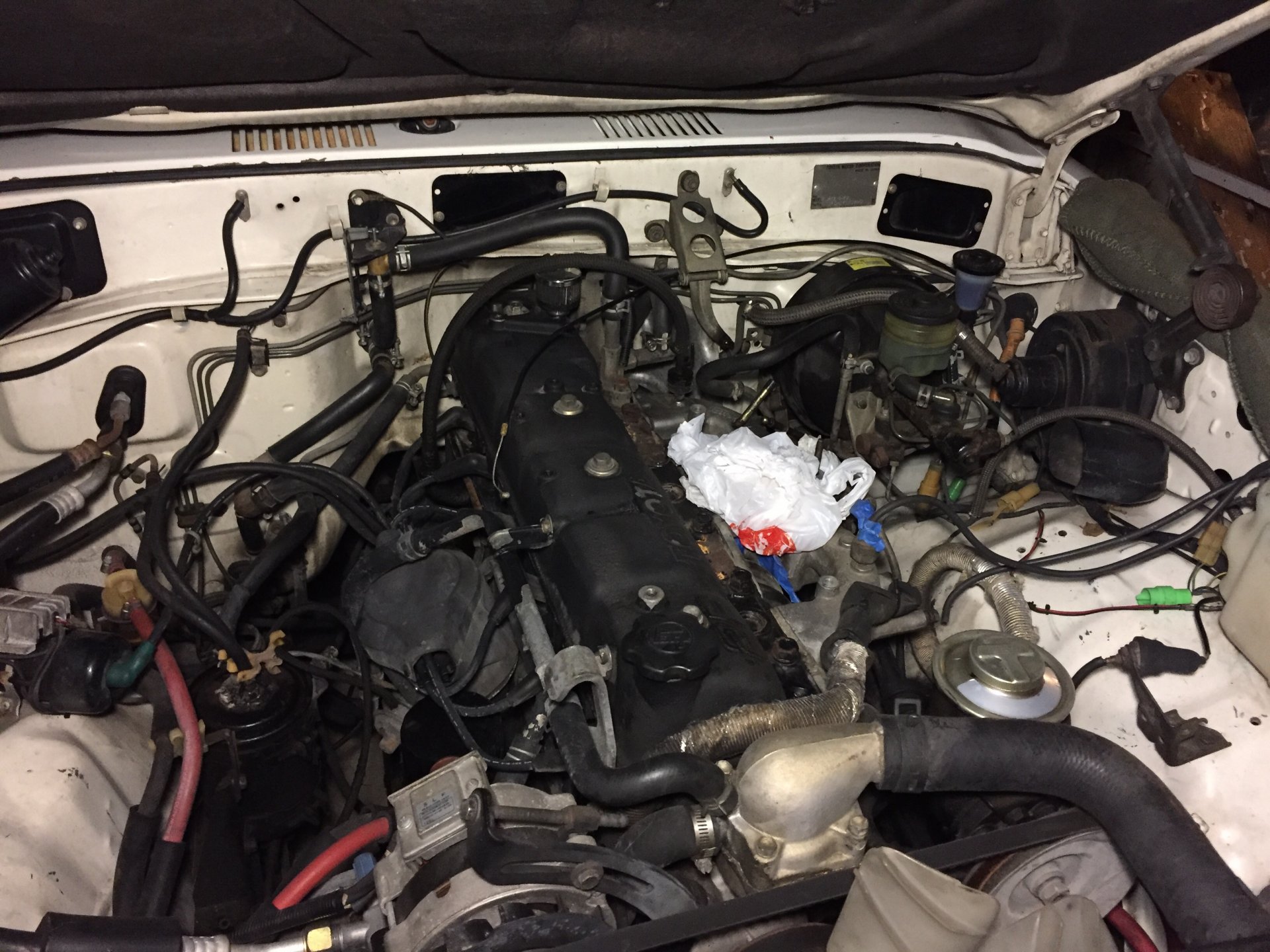 Welcome and congrats on getting off to a great start. Overall it looks great. The oily hose that traverses the top of the valve cover is for your PCV valve. The valve sits on the hard elbow coming out of the block behind the distributor and the hose plumbs it into the intake manifold. As for the oil breather on the back of the valve cover, in stock configuration there is a hose that goes there connecting the valve cover to the rear of the air cleaner cover. The carb insulator should be used as is without any gasket or sealant by design. Over the years what tends to happen is some well-meaning tinkerer will try to scrape the surface of the insulator thinking there must be some old gasket spackled on there that needs to come off. Once marred it may not seal properly - leading to the workaround of adding a paper gasket to the insulator. If you scrape the old paper gasket off do it gently with that in mind. If you feel like trying to replace it check the used parts forums here or places like CruiserYard.
Messing with the headers/permatex issue is kind of a can-of-worms in my opinion. If your valve job includes taking off the head to redo the valves, seats, springs, etc. then removing the exhaust and reinstalling with proper gaskets will be part of that job. If you're just planning on setting the valve lash, I'd base my decision to mess with the headers/manifold based on whether it's working - if it is I wouldn't mess with it.
Have fun.

Awesome. I'll get rid of that breather and replace with the hose. Since I'm desmogged, is that PCV valve and hose doing anything or just acting as a place holder? I'm really just starting to get my feet wet with engine system, so, sorry for my lack of knowledge.

Looks great, sounds like you have a great platform.

Do you live in northern Virginia area? I grew up around there and quite familiar with the D.C./Georgetown area. Never saw many 60s there though.
- Nate

mattressking said:
Looks great, sounds like you have a great platform.

Do you live in northern Virginia area? I grew up around there and quite familiar with the D.C./Georgetown area. Never saw many 60s there though.
Click to expand...


Thanks! She drives great. There are definitely things I would've done differently, but I can work with it. Should've clarified - original owner bought it at Tysons Toyota in Vienna,VA. Looks like he moved to Cary, NC at some point. Then a couple from Georgetown, TX bought it. And then I bought it and brought it home to San Antonio.

I found the original invoice for it! 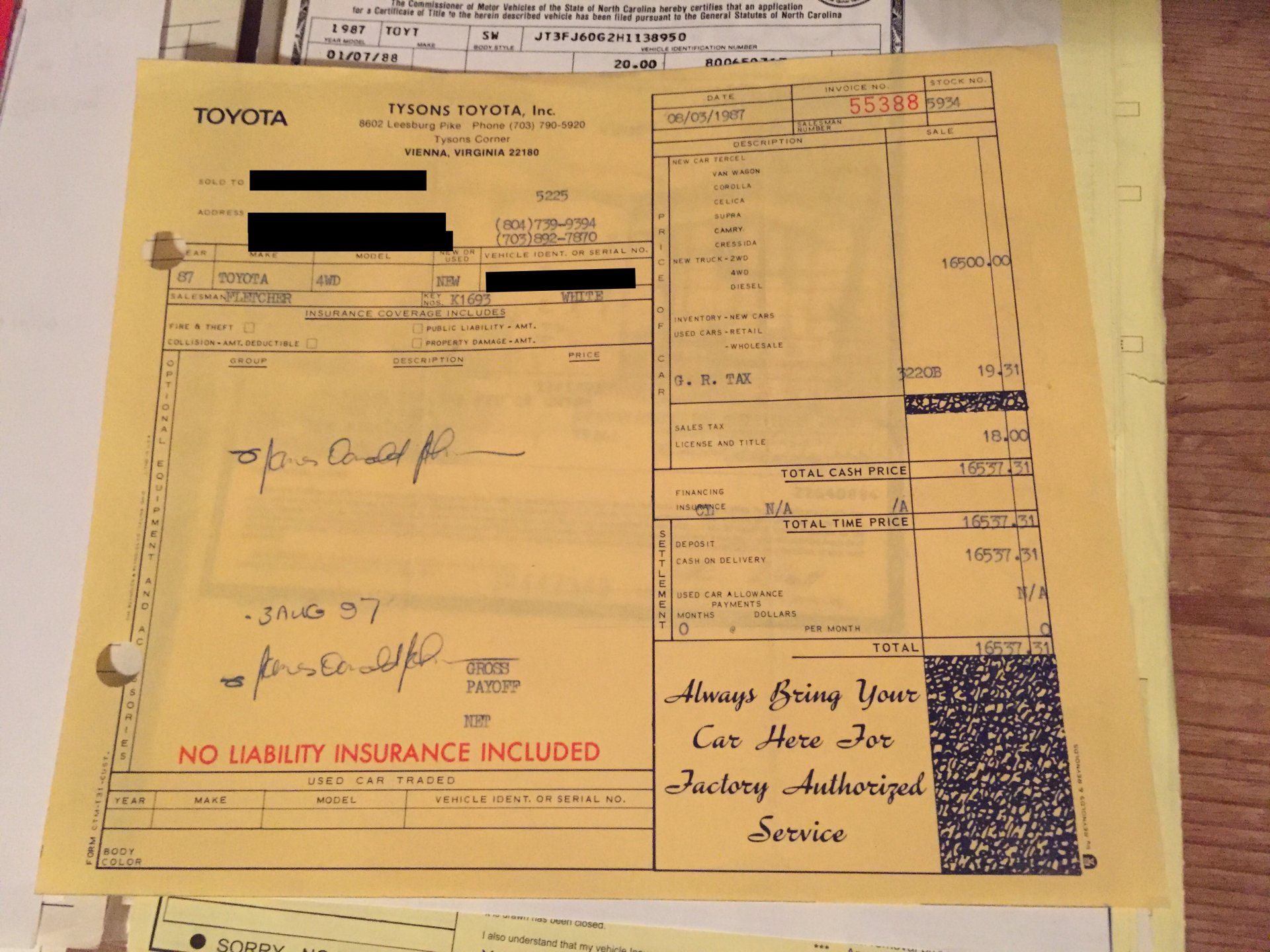 FishTown said:
Thanks! She drives great. There are definitely things I would've done differently, but I can work with it. Should've clarified - original owner bought it at Tysons Toyota in Vienna,VA. Looks like he moved to Cary, NC at some point. Then a couple from Georgetown, TX bought it. And then I bought it and brought it home to San Antonio.

I found the original invoice for it!

Can't imagine what someone would pay for a brand new FJ60 with ZERO miles today.
Click to expand...


That's unreal! I lived down the street from Tysons Toyota, just moved west a couple months ago.

Knowing how long the thing would go for, I would be willing to pay a decent amount for a brand new rig.
- Nate

Don't mind me. Just adding some poser shots from the past year. 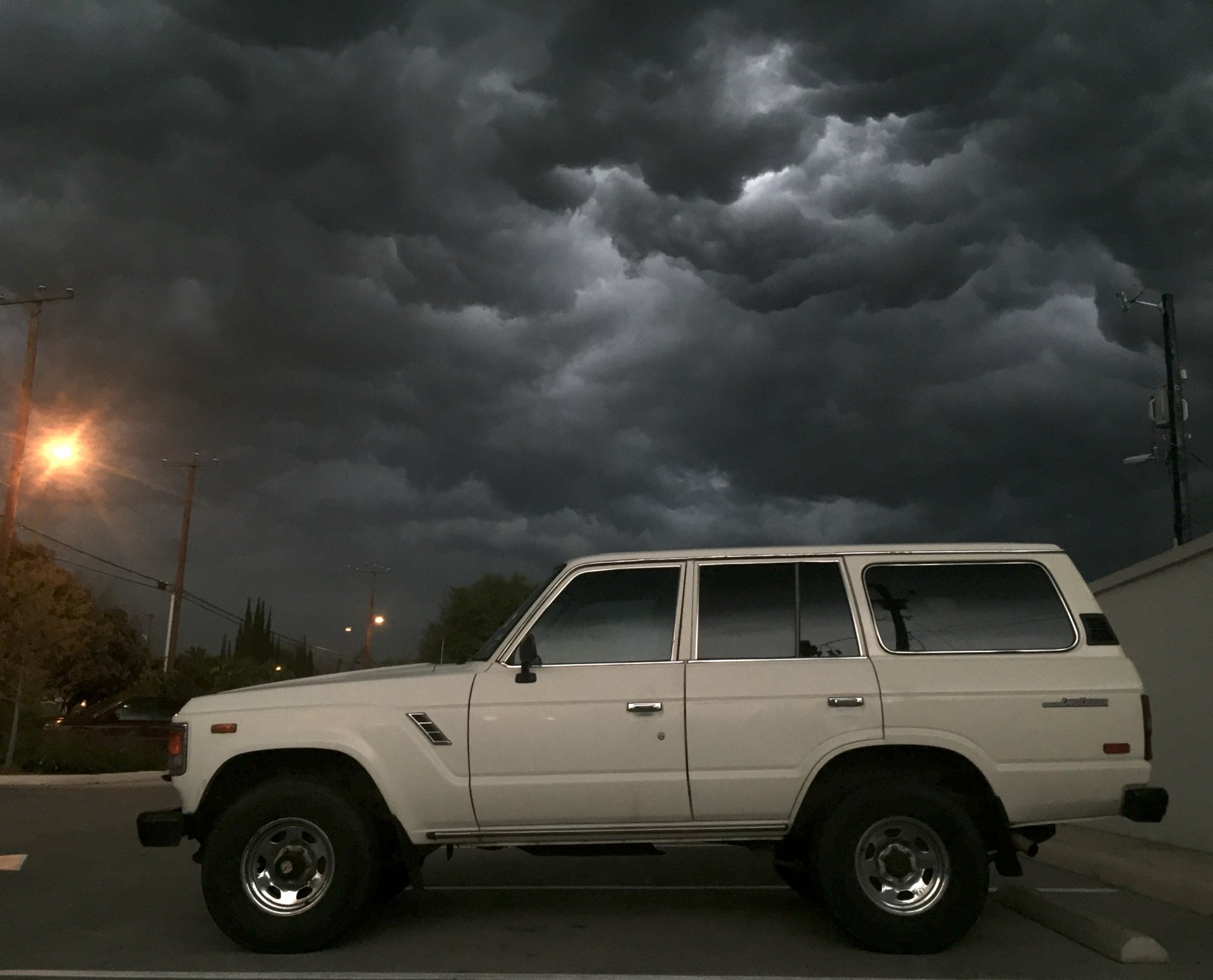 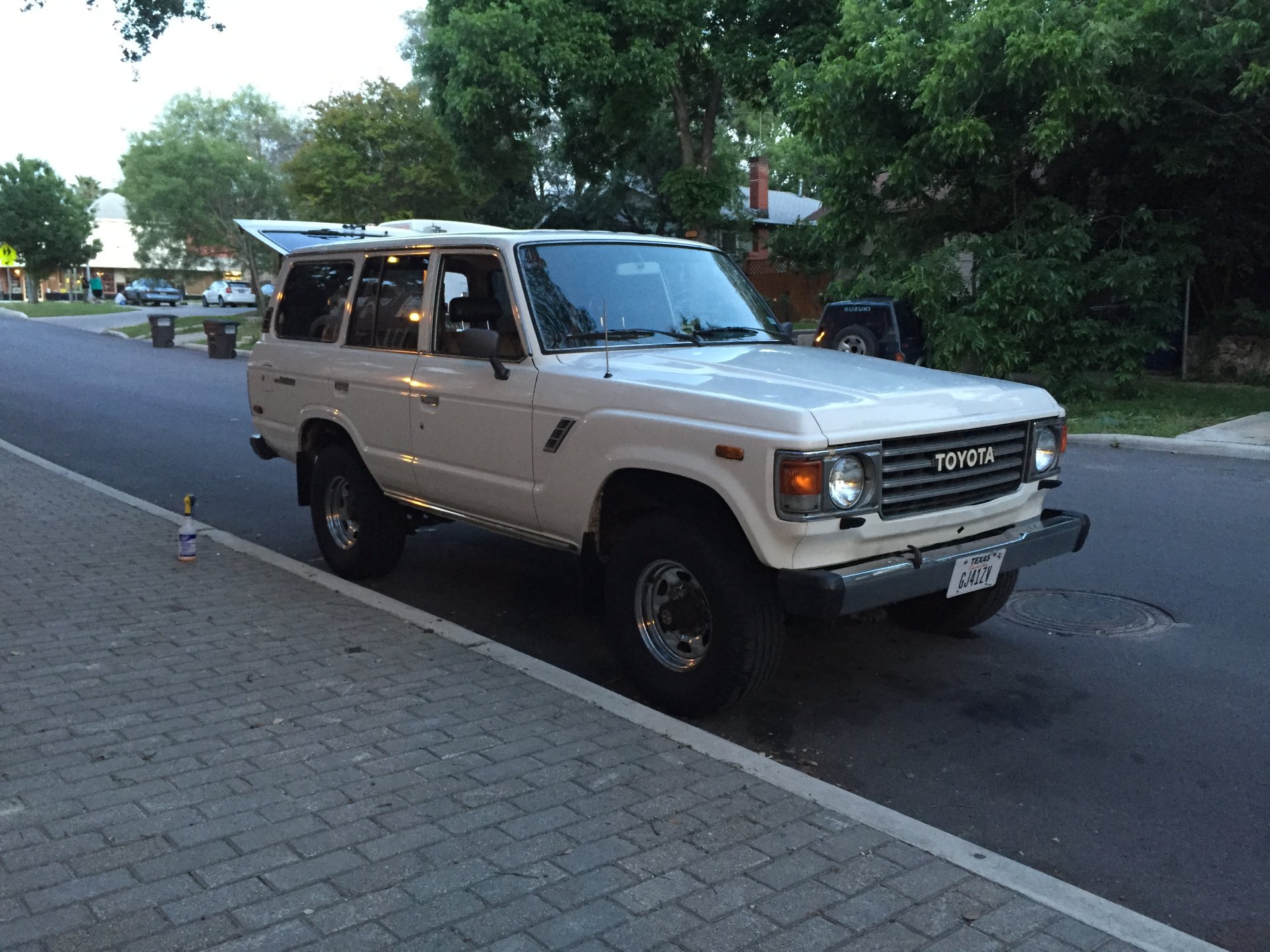 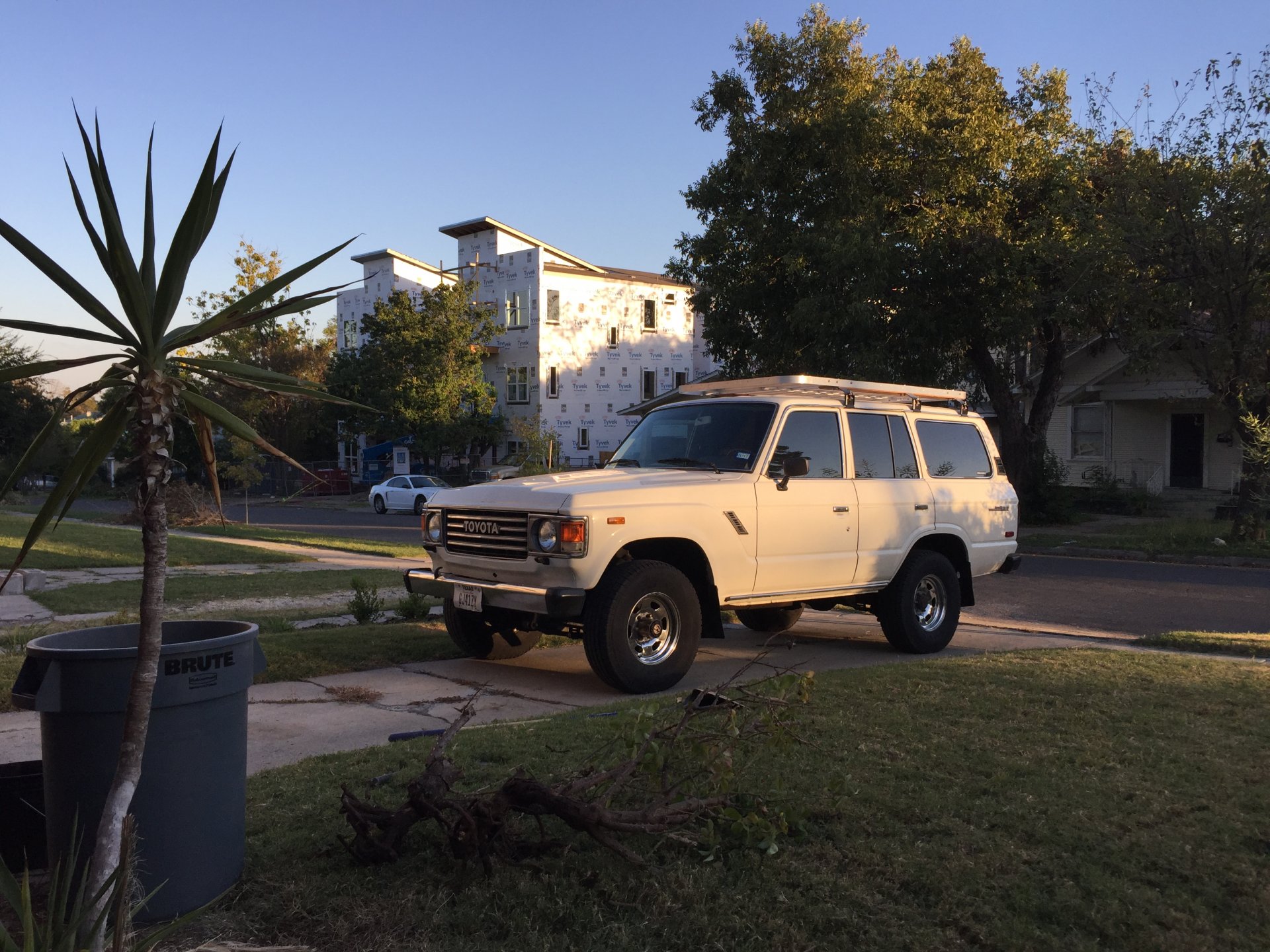 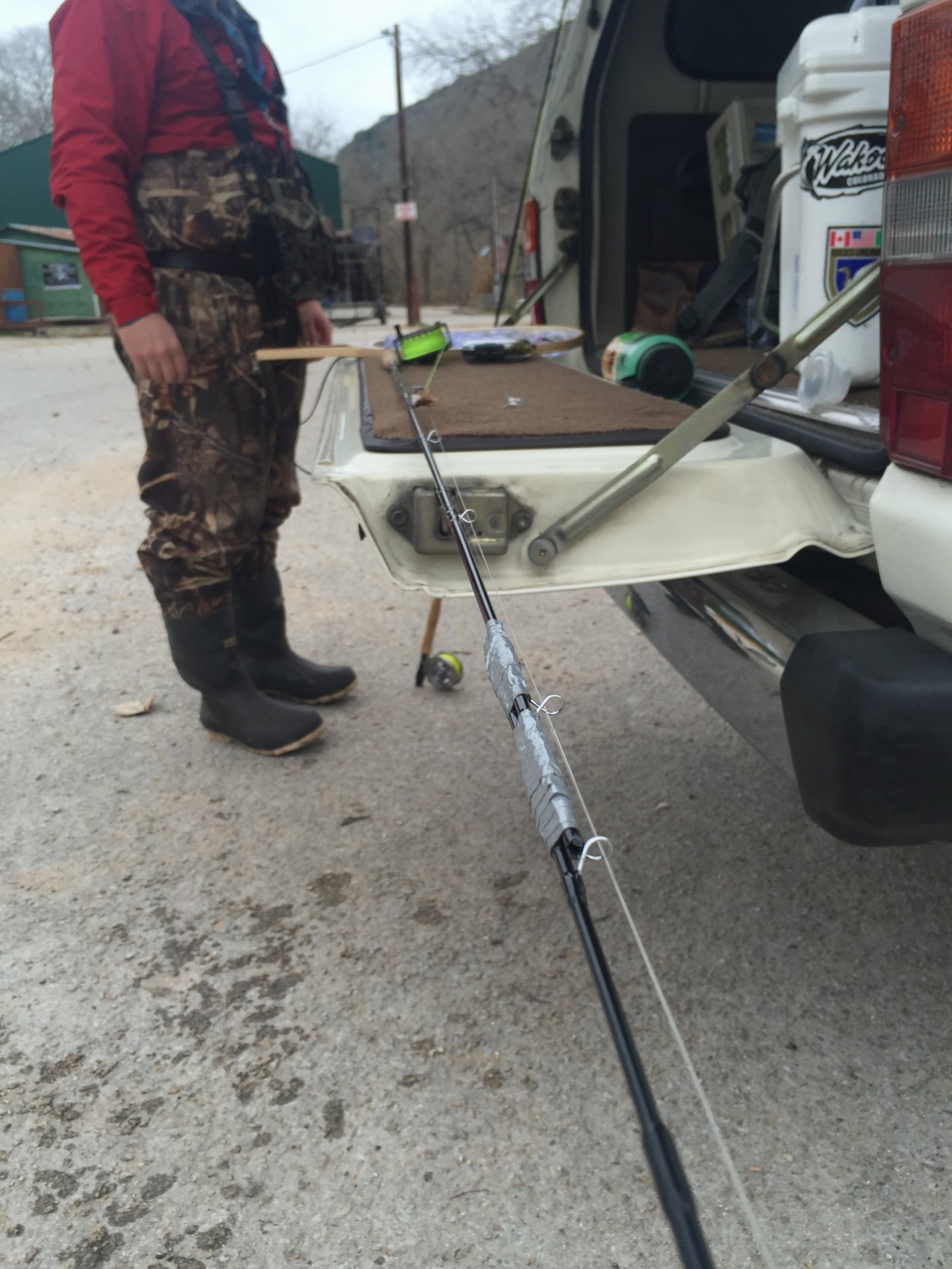 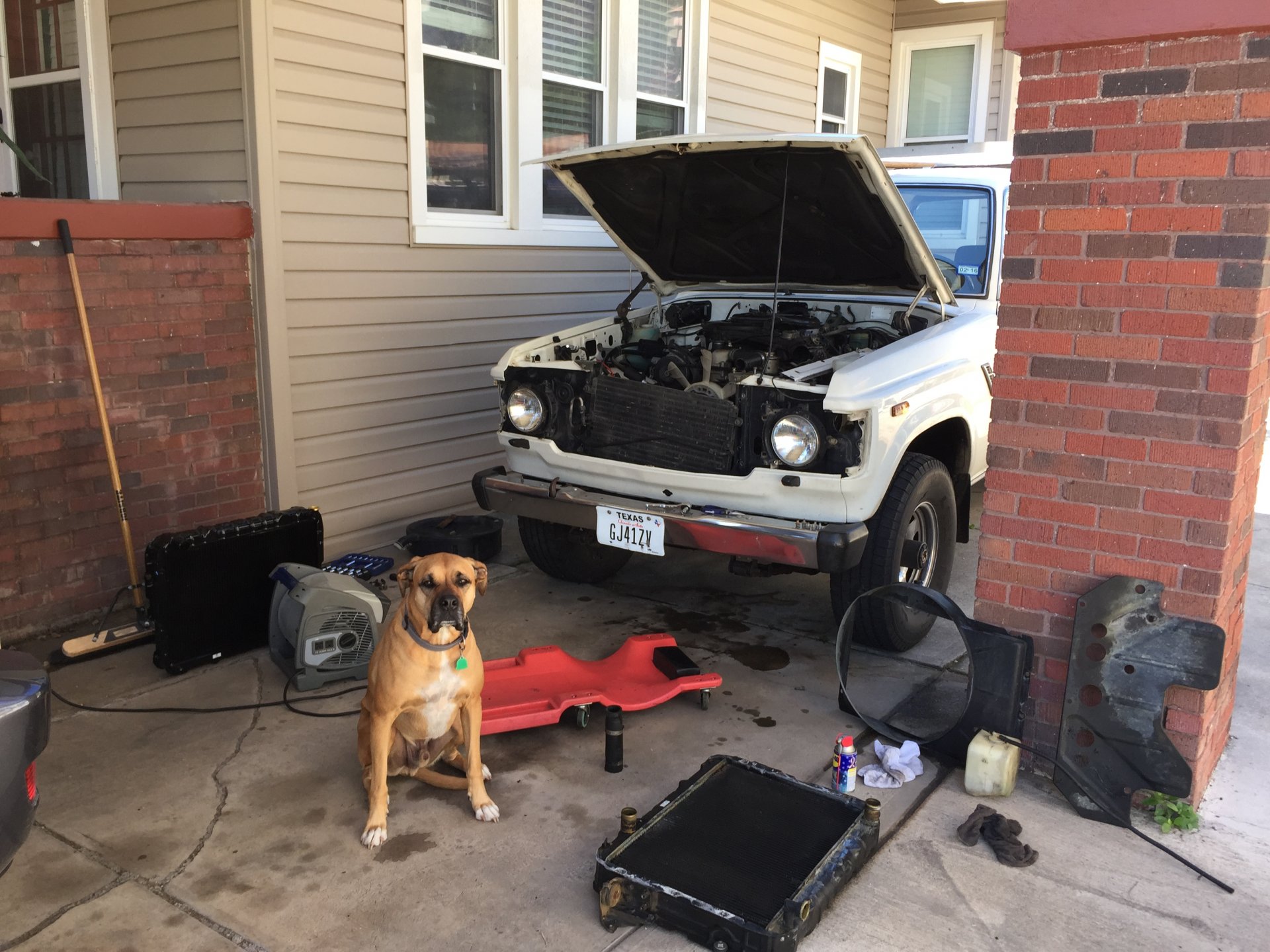 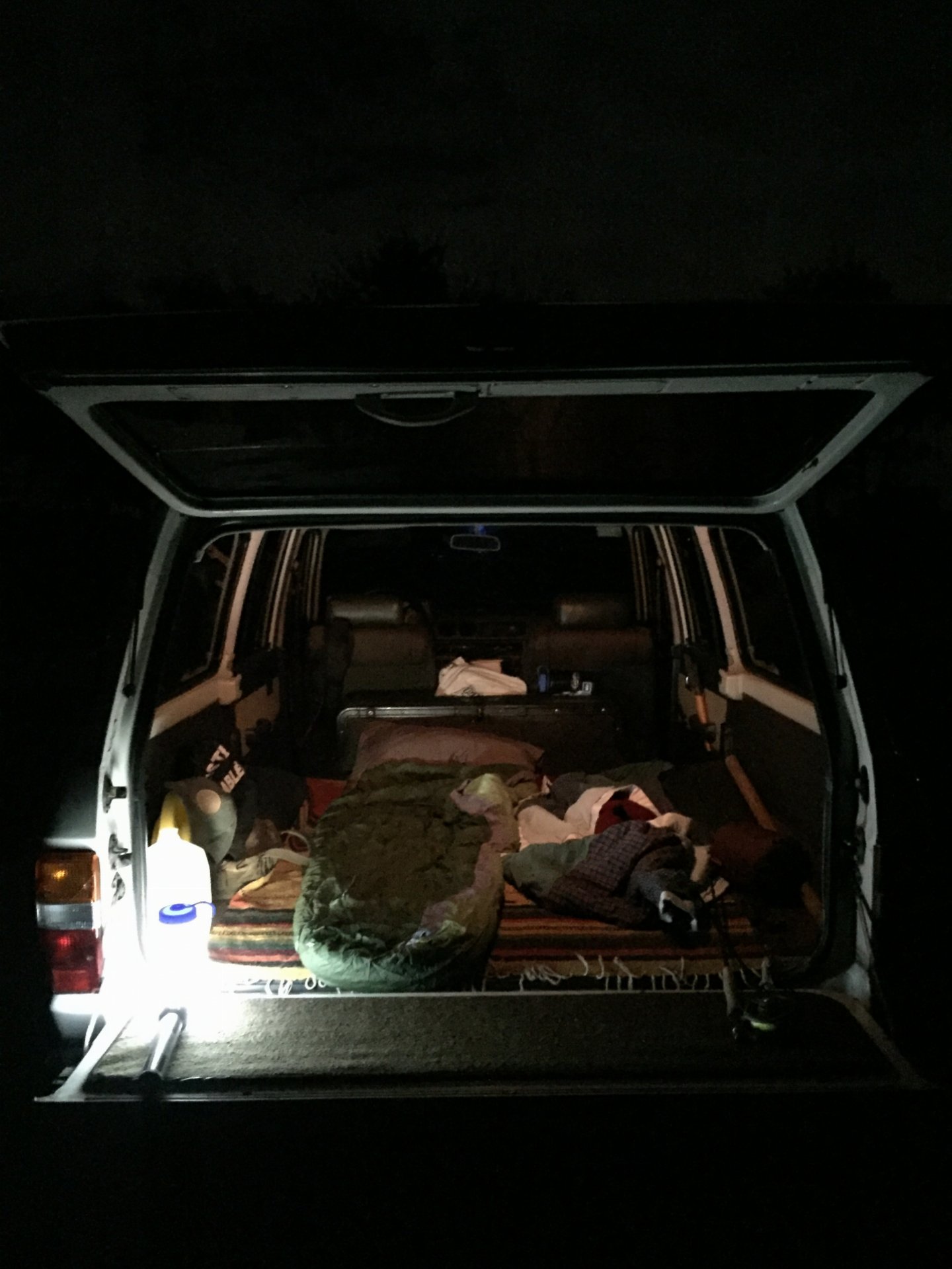 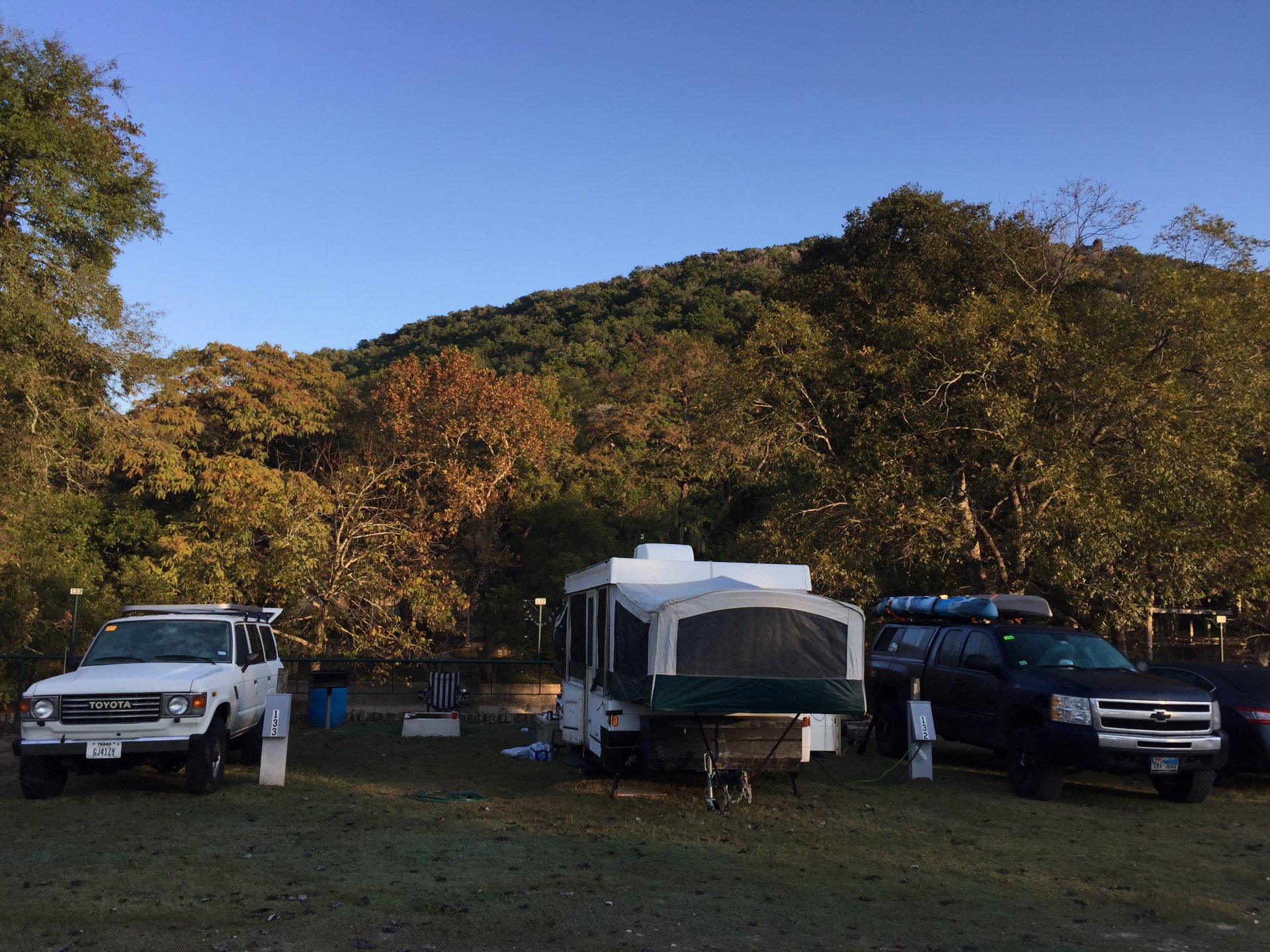 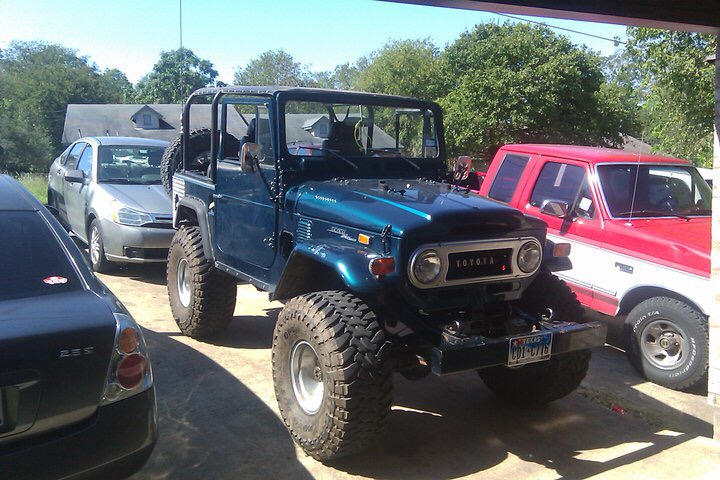 Oops. How did that one get in there?? RIP Big Green

I pulled the valve cover off yesterday. Looked decent - not too much carbon build up. I'll take a picture later.
'87 FJ60 - Shirley's Thread

Camped on the Guadalupe River with my wife and son over the weekend. It was Everett's first camping experience and he did remarkably well (especially for being only 3 months old!) Nothing like breakfast over an open fire. 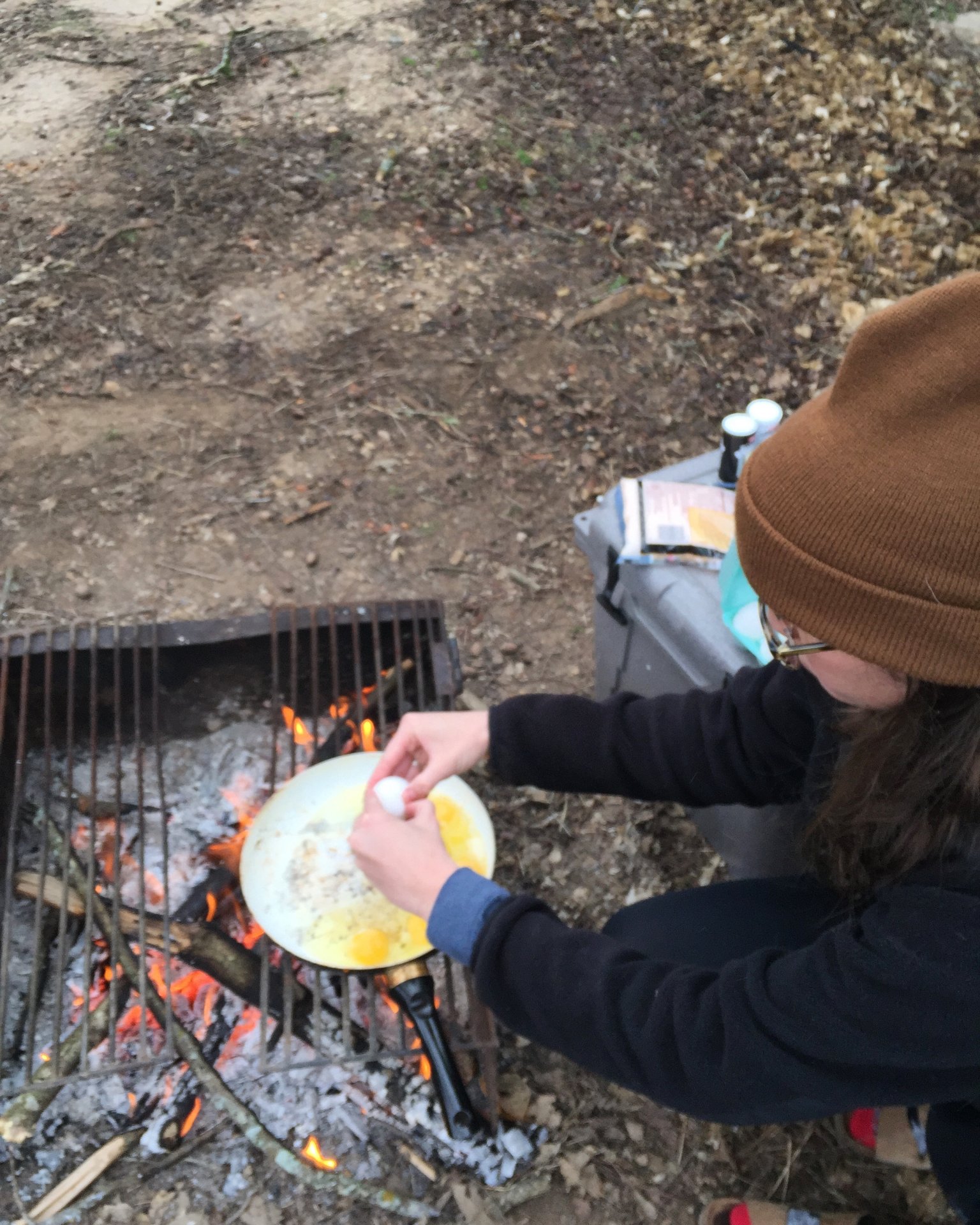 Got some goodies in the mail on Friday before we left. 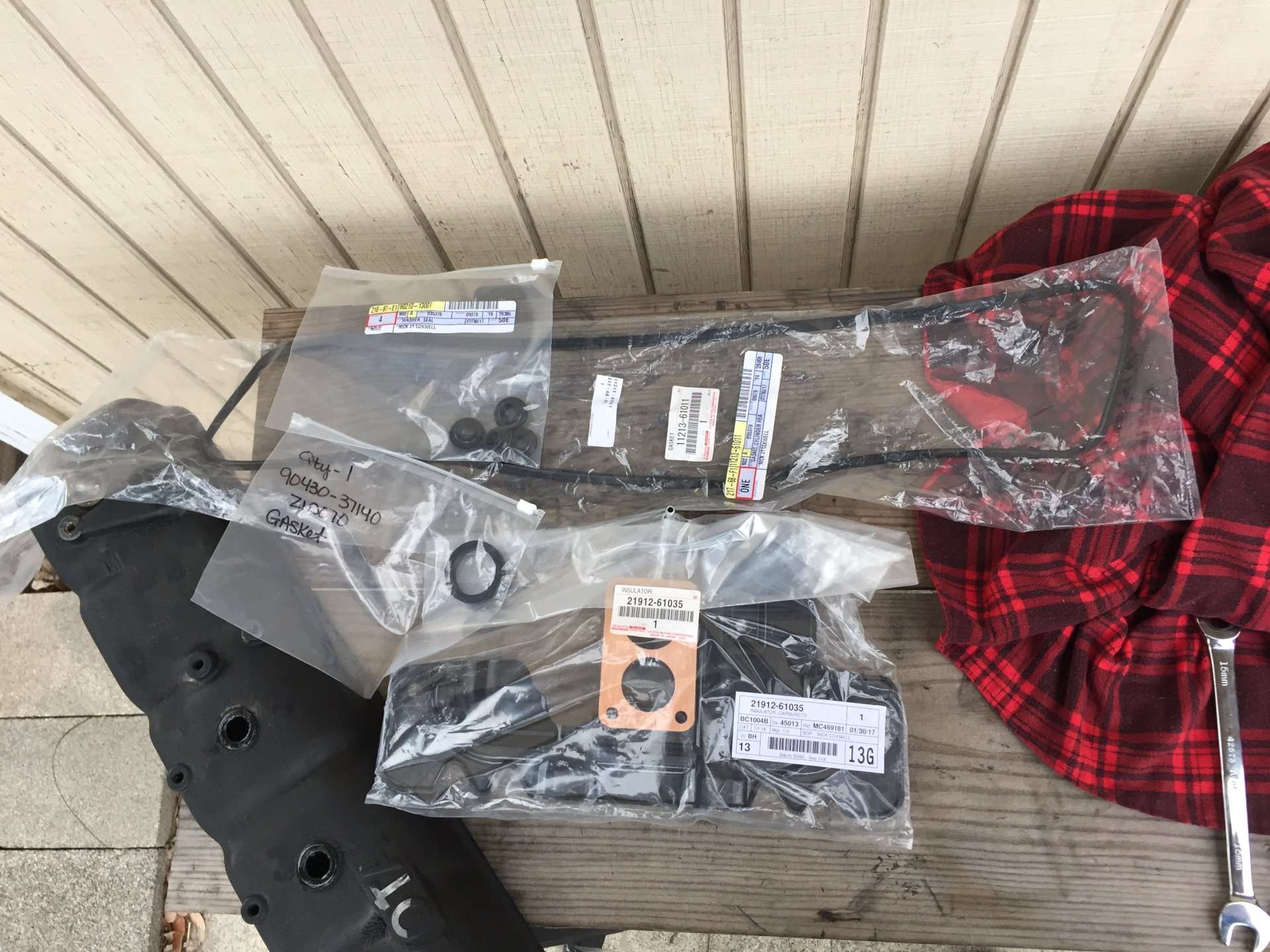 And now I'm about to do the cold valve lash adjustment. Looks I'll also be ordering some new plugs. 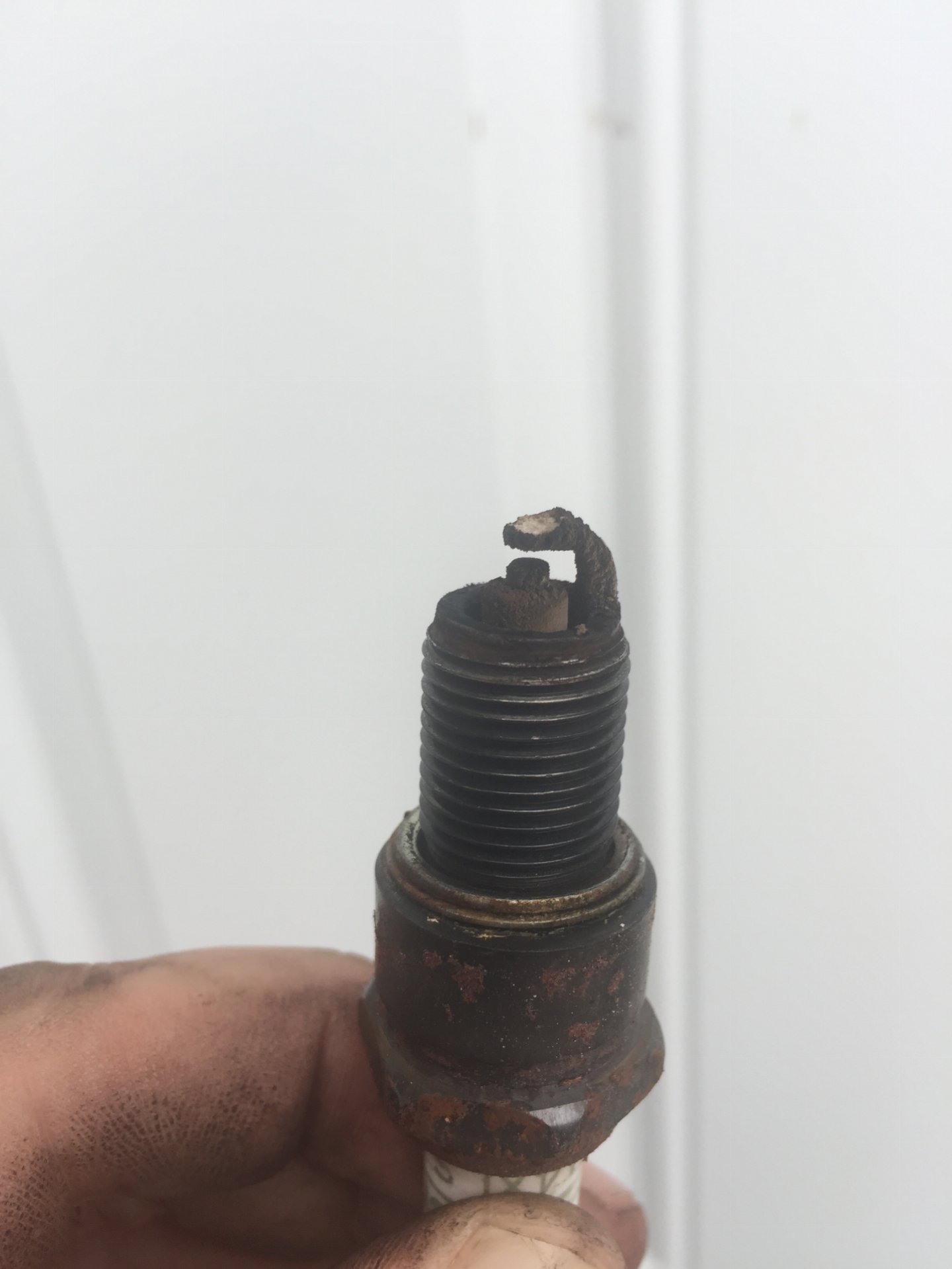 Welp, that was a bigger pain in the ass than I expected. I used .016" for the exhaust and .010" for the intake. I realized I was accidentally using .015" on the exhaust valves about 60% of the way in... then when I went back to change them and I accidentally changed a valve on the wrong stroke. I'm going to chalk it up to running on little sleep and trying to rush so I could watch the rest of the super bowl. I'm about 95% sure I did it right. 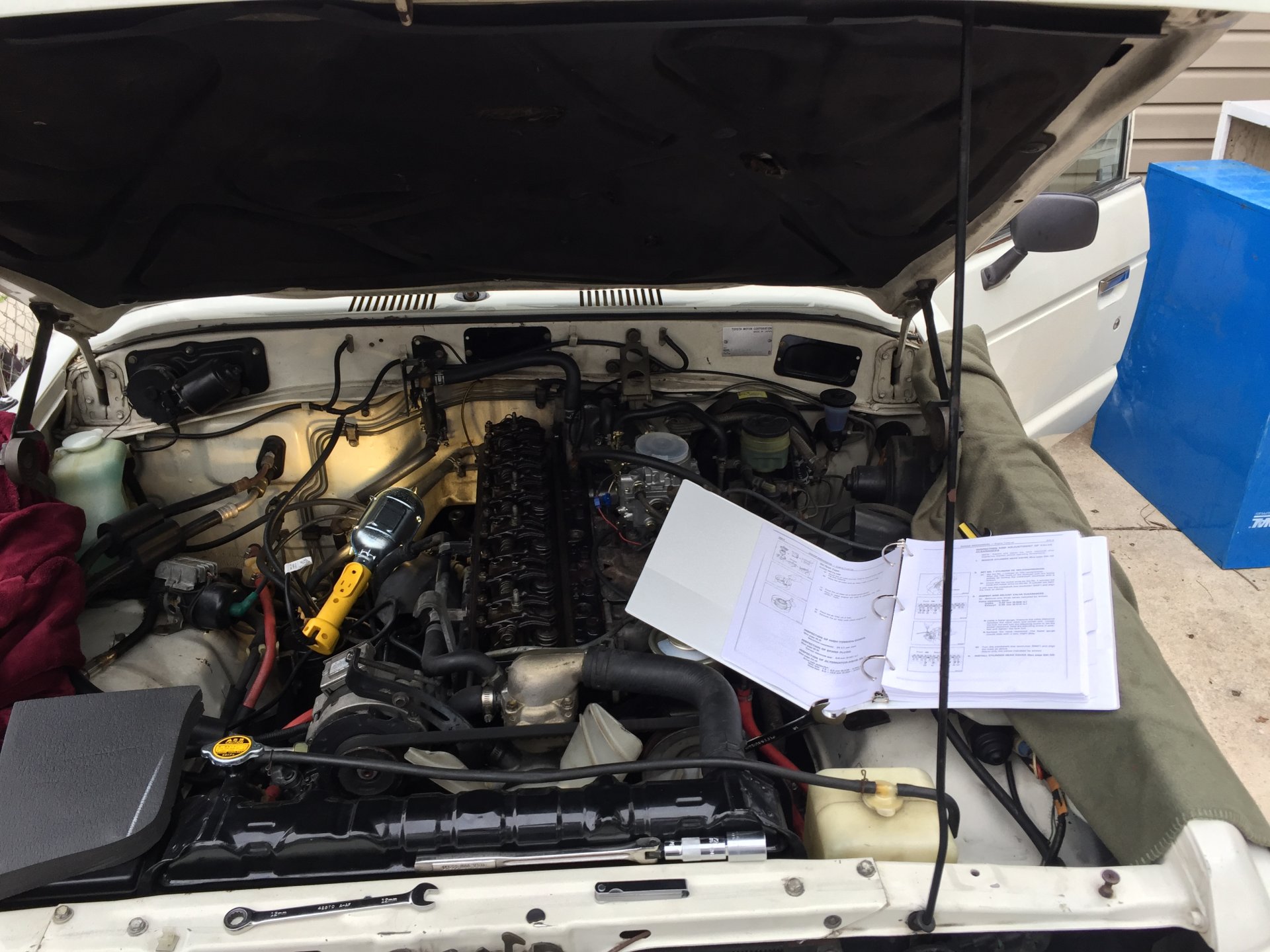 @CaptClose is coming over tomorrow to help me get my new vacuum hoses hooked up and we'll see if she cranks over.
'87 FJ60 - Shirley's Thread

FishTown said:
@CaptClose is coming over tomorrow to help me get my new vacuum hoses hooked up and we'll see if she cranks over.
Click to expand...


Looking forward to it brother. Matt brought his Colombian 73 over today andwe swapped out his radiator. It went pretty well... only one extra "mystery" nut leftover. That's pretty could for me. 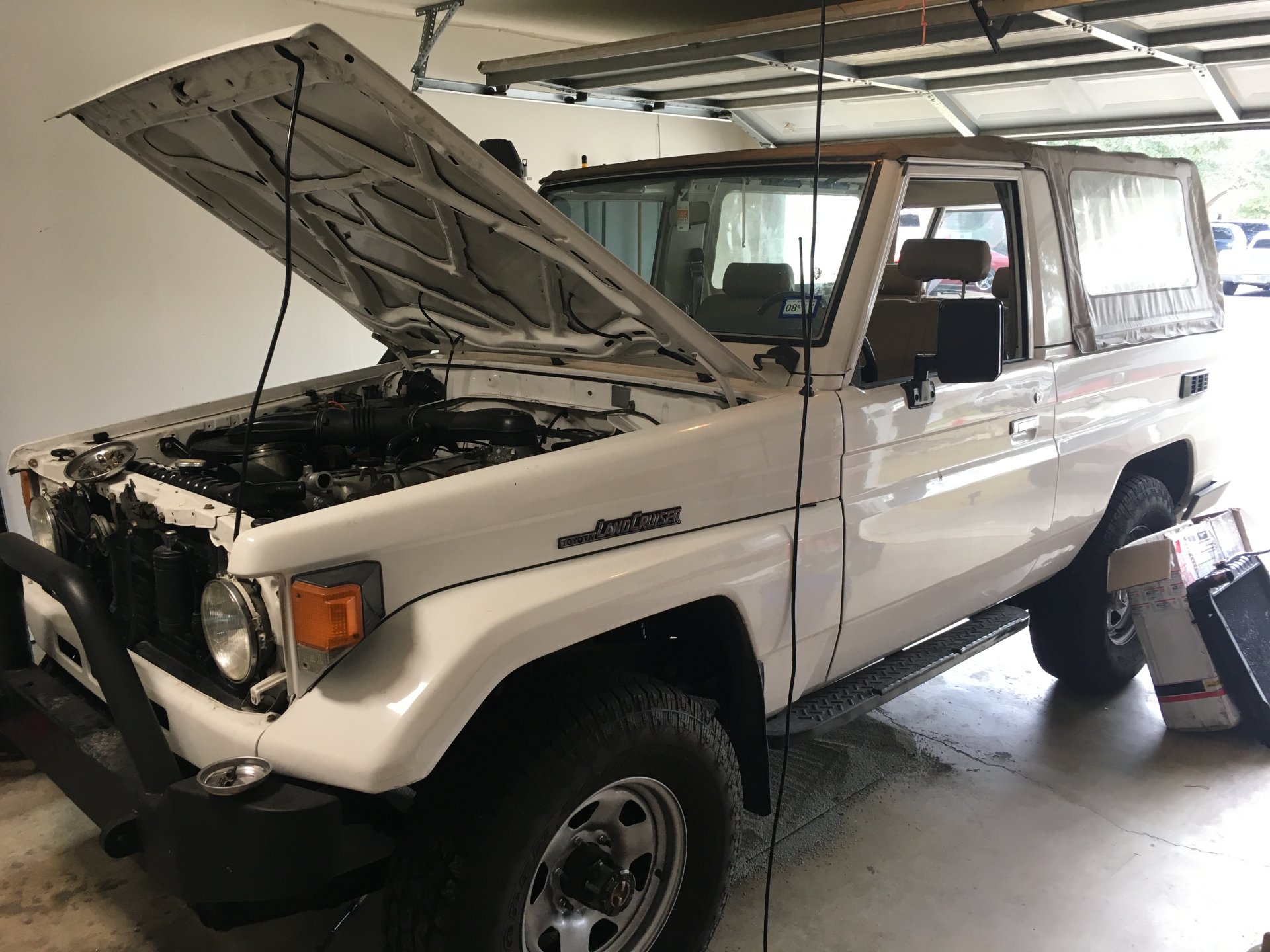 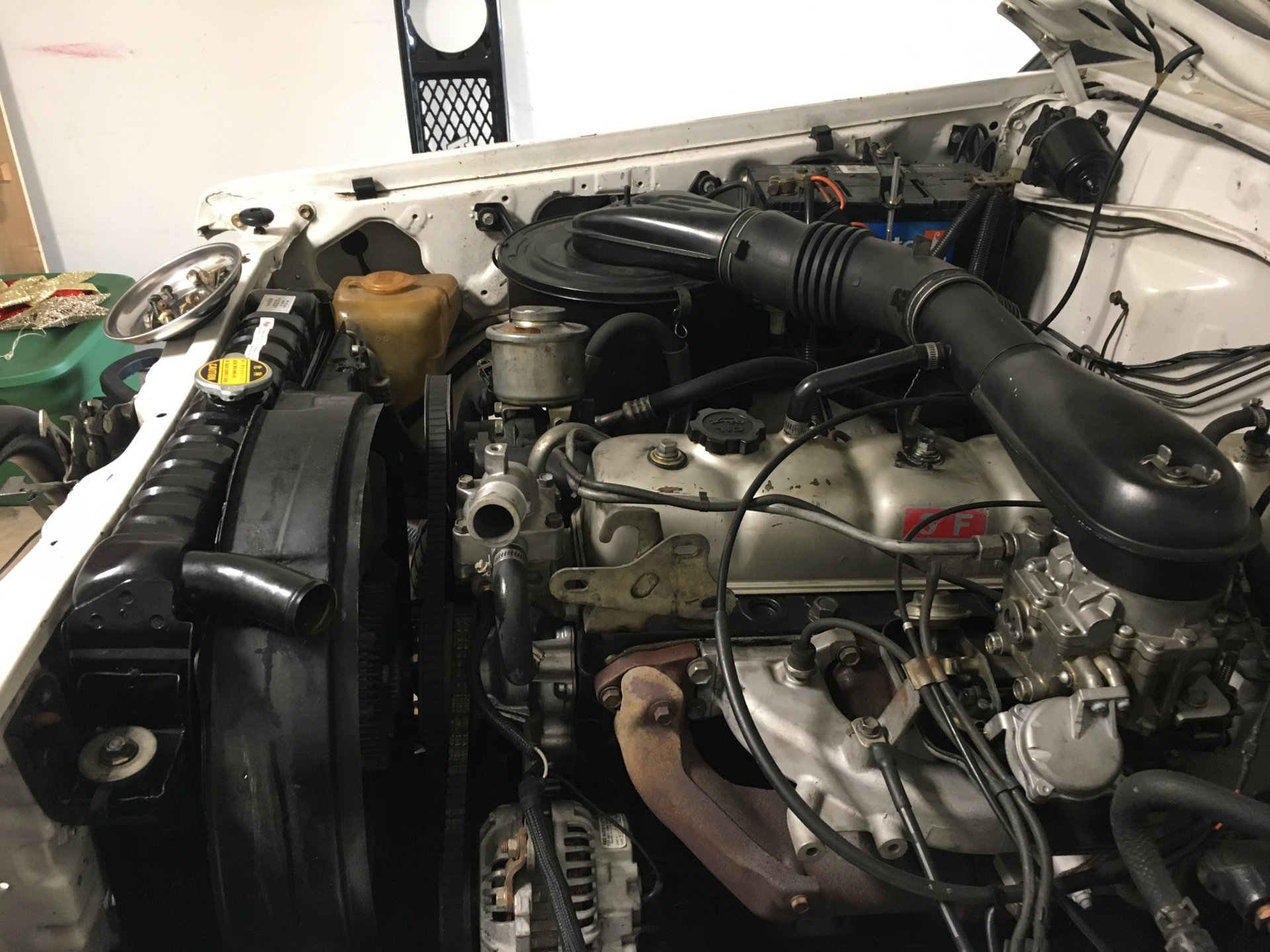