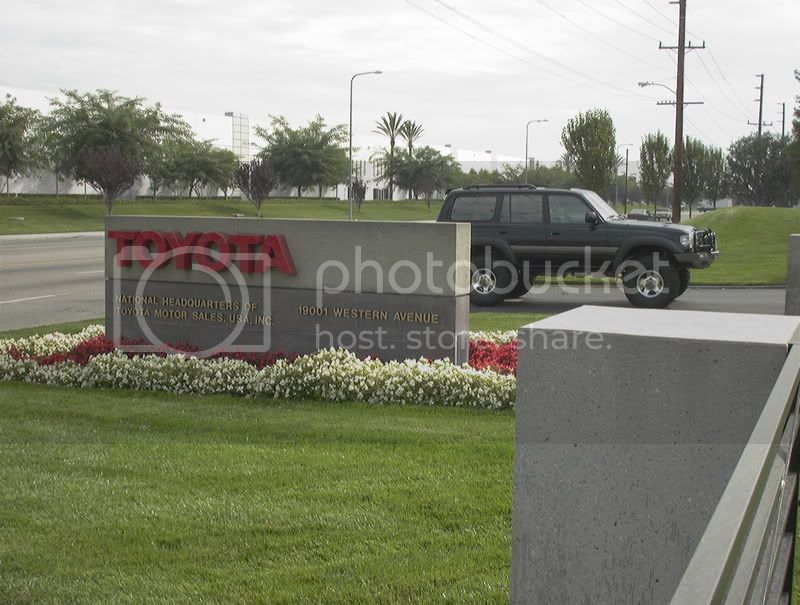 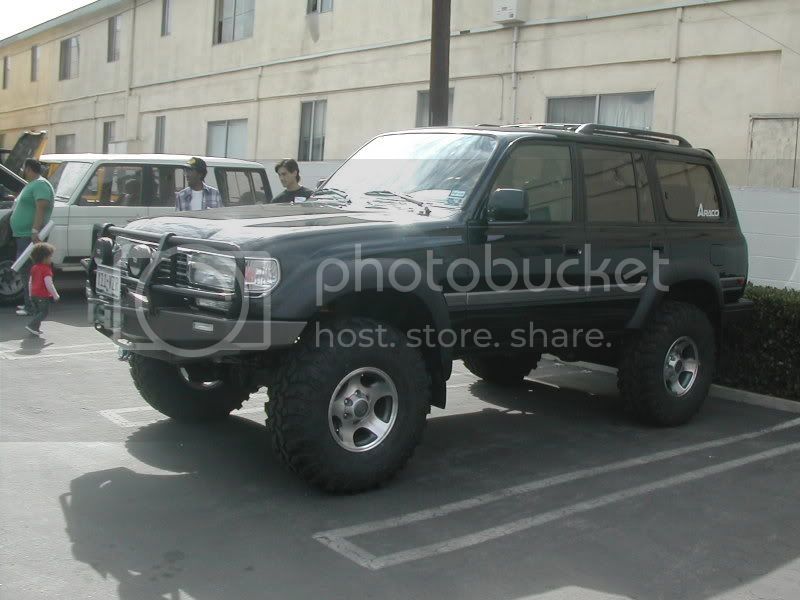 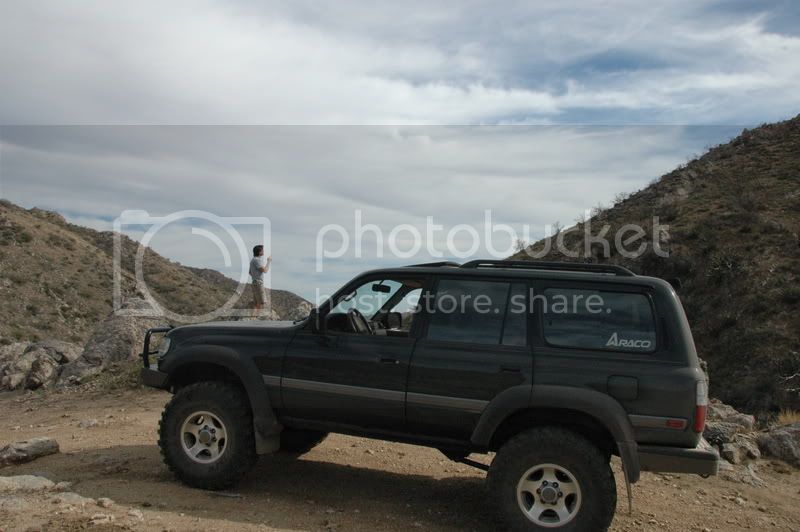 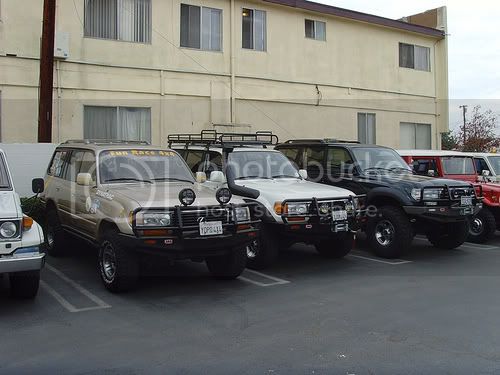 Thanks to Woody and those others who keep this site so well organized and maintained, especially Romer here in the 80 series corner. There are also so many great people here that have contributed time and energy helping others with questions and innovative ideas to make this such a great forum.

I’ve lusted after the 80 series since I started getting into that teenage car crazy phase around the final years of their production. I still remember seeing the National Geographic expedition across Antarctica with two decked out 80s and thinking to myself “man those have to be the most awesome Toyotas ever!” Since then I’ve always wanted one, and my parents where gracious enough to get me my own so I would stop drooling over my Fathers’. So as soon as the previous owners got it broken in, I picked up my 1997 Emerald Pearl 40th. Ed. 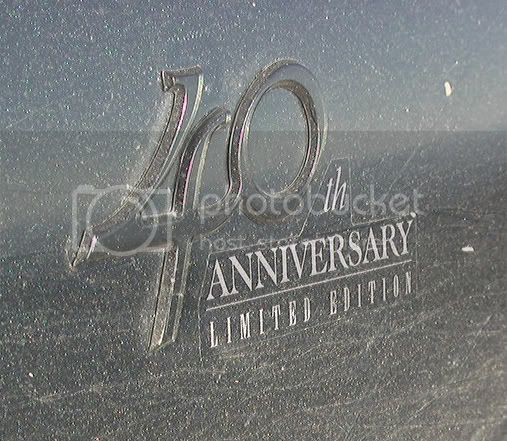 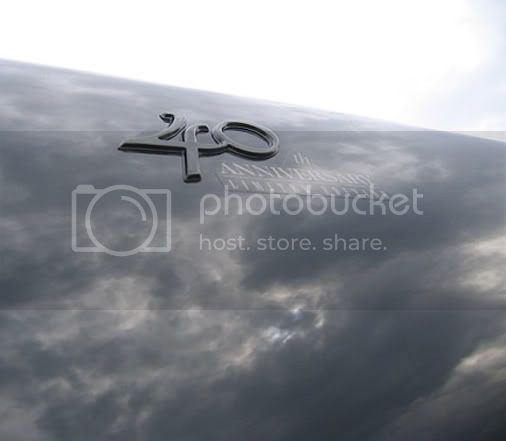 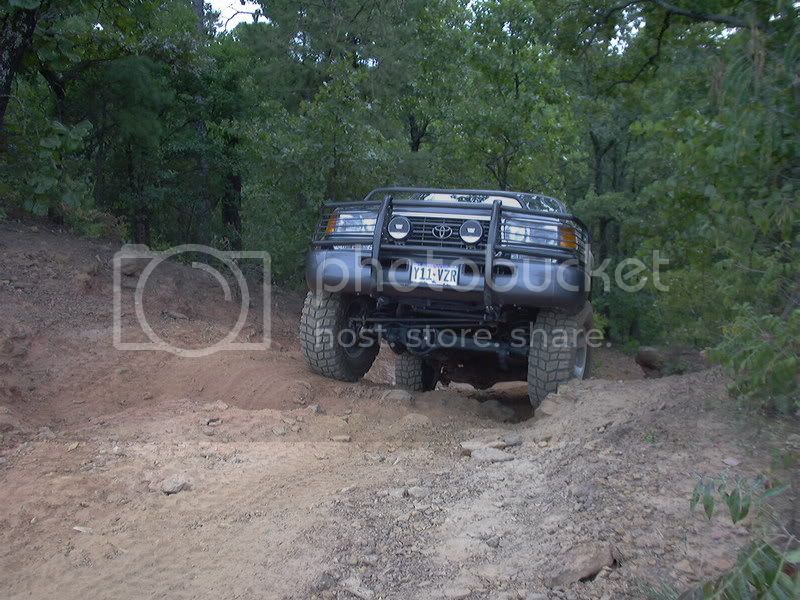 I had also planed to have a few more modifications finished by the time my turn for ROTW rolled around but with my '86 pickup taking up all my project time I fell a little short. So here's a list of what I should have had done and is now waiting for me:
1) Mile Marker 9k hydraulic winch with interior mini truck antenna switch
2) Angle iron added to rear lower arms
3) Rear cargo light
4) Replace dash and headliner speakers with infinity kappa tweeters + crossovers, stock door woofers.
5) Tie in 4 channel Optimus (Pioneer) amp in place of stock amp for use with stock head unit
6) Cobra CB in ash try slot
It's a shame to have stuff setting around mocking you....
Last edited: Dec 8, 2007

Well first I had to get some new rubber in the flavor of Pro Comp Xterrain's 305/70R16. Which runs a little on the short side of a true 33" tire. New, the tires are just all around great but they get A WHOLE LOT LOUDER as they wear and even "zero'd out" balanced they like to kick around on the highway and give a shimmy. Also I've found as they wear the dreaded 10-15mph direction tread rumble gets worse and worse. But at the 1/2 way point they are doing well with around 35k miles and I expect to get at least 50k out of them. I also installed Slee Off-Road's speedometer gear, which is dead on at 70 according to my GPS. 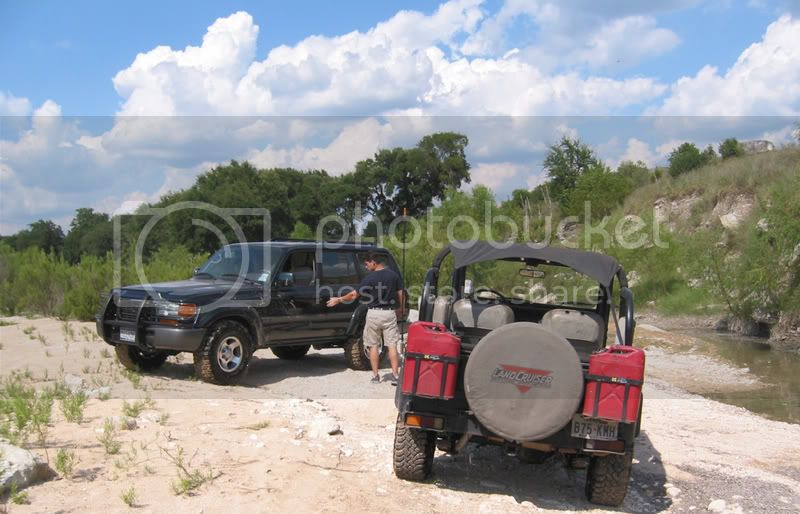 Also I started on Phase1 of my custom painted center caps: 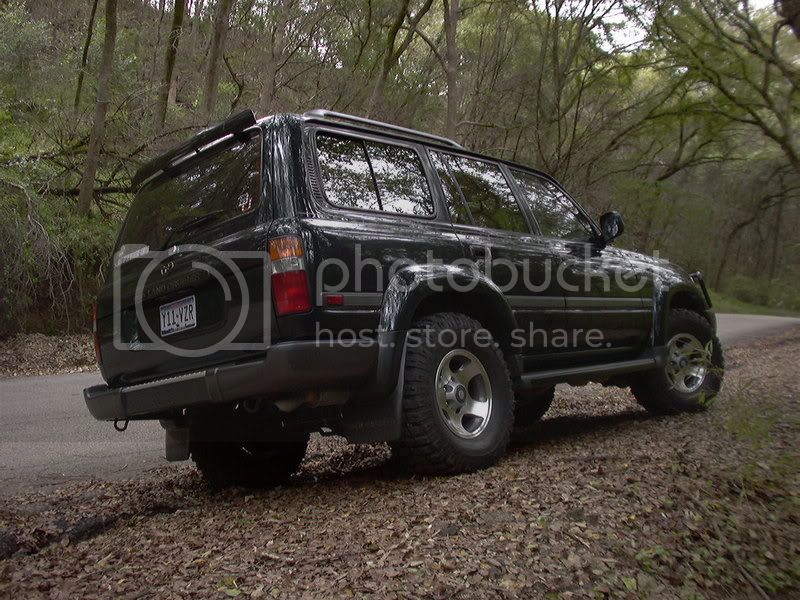 Along the way I also put in some OME 851s + 1" spacers up front and the 860s in the rear, teamed up with Edelbrock IAS shocks. Corrected the castor with the OME bushings. About that same time I pulled all my flares to replace the rubber trim. Running around without flares got old after a few days and I stick with my opinion that the flares look much better on. 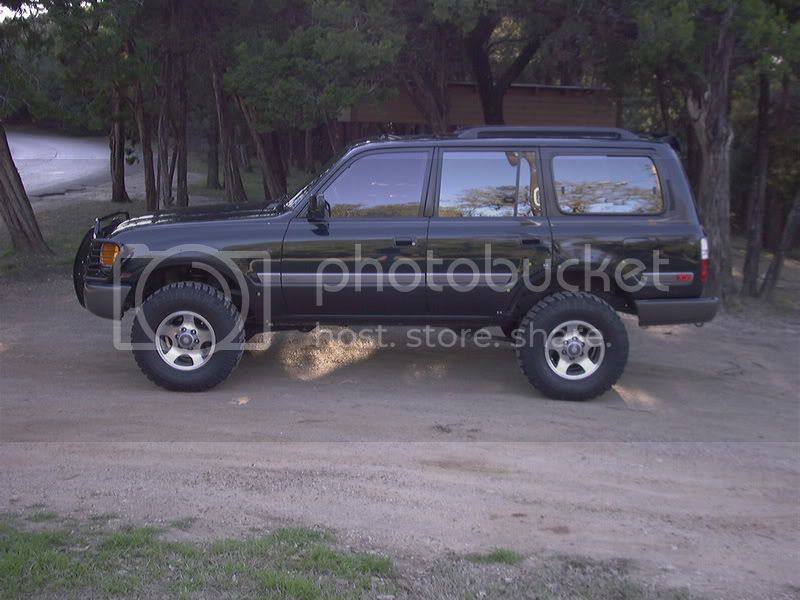 Also I ditched the running boards and trailer hitch. I put on a Valley pintal/ball combo and added Warn 6" 4x spot lights on the damage multiplier with a stock interior fog light switch. MOT also hooked me up with the very cool crystal version tail lights and front turn signals. I then later picked up matching front side markers. I also took silver bumper paint and repainted the hard plastic on the door moldings. The look with silver is a nicer match with the dark emerald green than the standard dark gray. 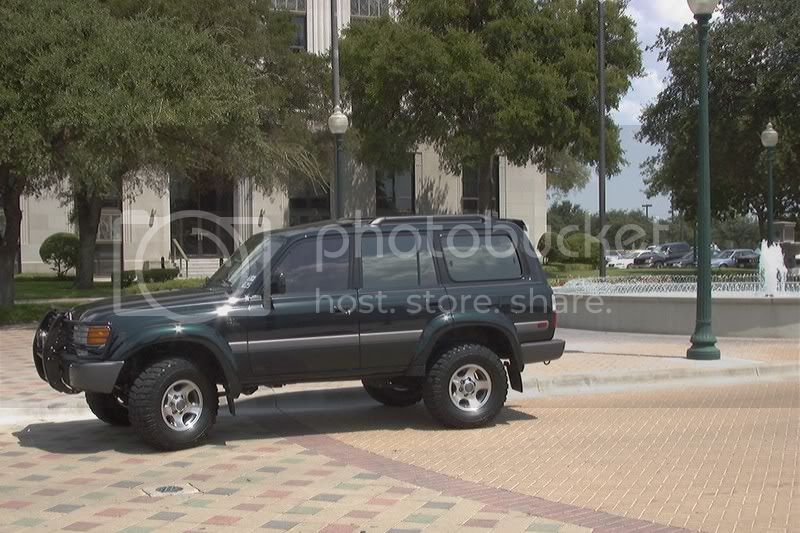 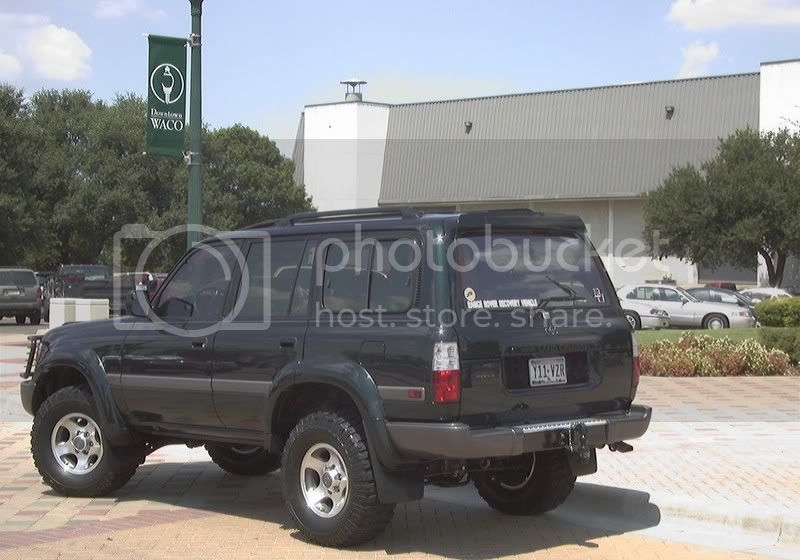 This was also Phase2 of the center caps, chrome paint with the gray center.
Last edited: Dec 27, 2006

Recently I added an ARB front winch bumper and painted it a two tone with bronze hammer finish. I also painted the rear TJM bumper the same, leaving the black plastic trim for a two tone. The rear bumper has a tire carrier which I do not run since I have spaced up my stock under carrier (another one of the great little ideas picked up from this forum). I also bought some driving lights from O'Riley's to put in place of the ARB supplied orange turn signals. All I had to do was bend the mouting tabs on the lights and they made a near perfect fit in the bumper. As for the rear I would like to find a light that fits in the bumper and replace the stop/turn light for use in reverse. Also included in the rear bumper deal was a new pintal/ball hook which has a much cleaner look than the Valley I had before. For added strenght around the pintal hook mounting holes I had a 3/8" plate welded on the back side of the bumper. 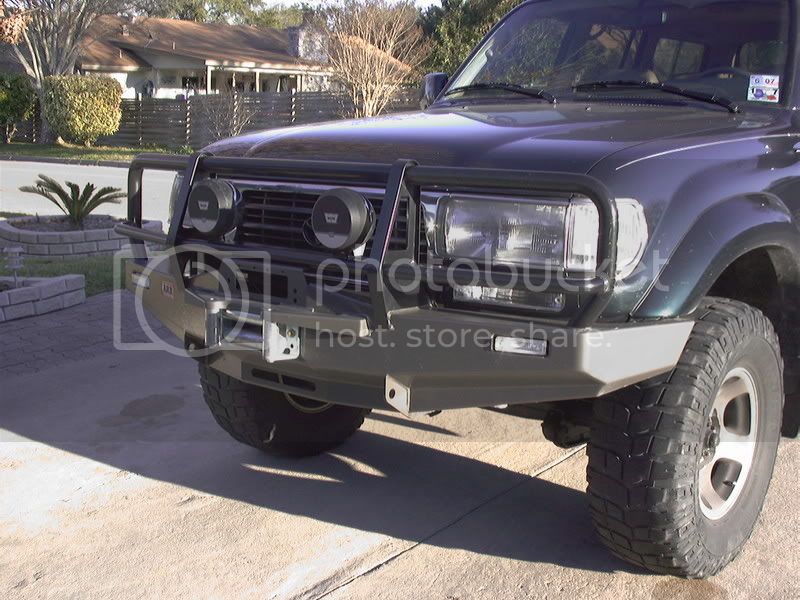 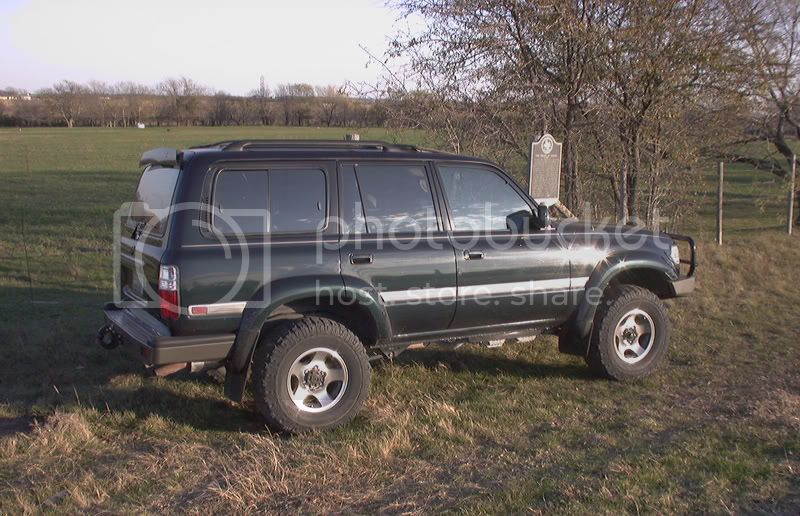 Phase3 center caps....NO CENTER CAPS. Acutally I'm in the process of striping and repainting them with the same style of Phase2 but with sivler bumper paint and a clear coat.

Here's a shot of the pintal hook plate I added, as you can see the bumper still flexs in but 3/8" was close enough. 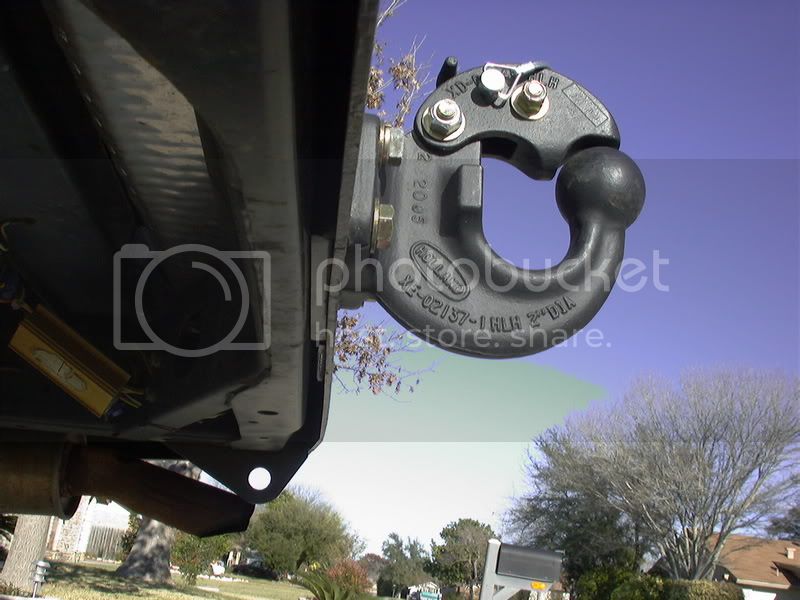 As for tid bits in the interior, I haven't got too much added yet. I did pull all the wood trim and relocated my 40th serial plate. I have a center console out of a LX450 that is waiting to go in just as soon as I get the matching trim that goes down the door panels and a matching wood steering wheel. 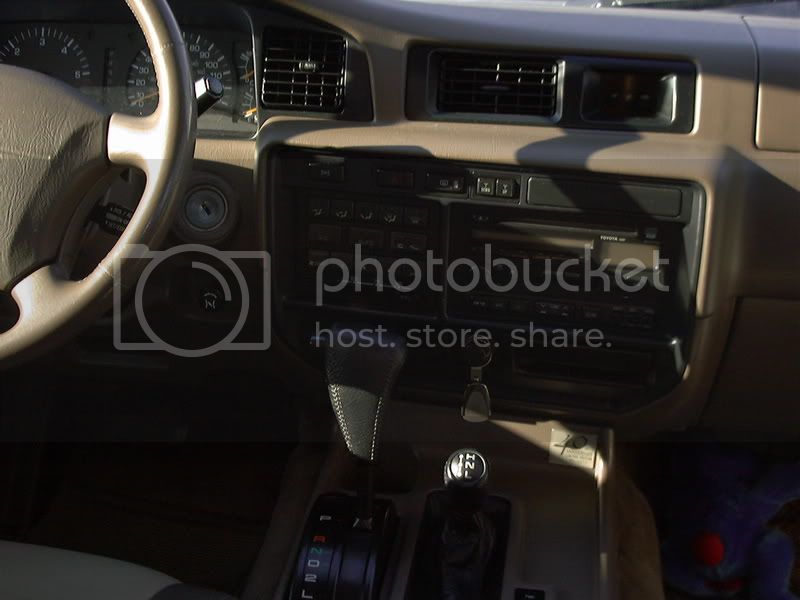 I also have an auto dimming rear view mirror that I would like to upgrade to a unit that shows outside temps.

The usual stuff I did add like the cup holder, a center diff lock switch with the #7 pin pulled and the winch idle up control. Also on the lower part of the dash under the rear heater control I put my bass-link level control. As for the bass-link it sets perfectly in the corner between the rear gate and jump seats. I also added a small 400watt power inverter to power my Toshiba lap top that I run MS streets and trips with GPS, Back Roads Topo and Pro Scan OBDII on. I have plans to add a larger power inverter in the back panel with an outlet up front and one in the back along with a 12volt outlet. I also have insulating heat/sound mat under the whole lenght of the carpet that I picked up from Pep Boys. It really keeps the heat down on the passengers side from the cats and transmission. 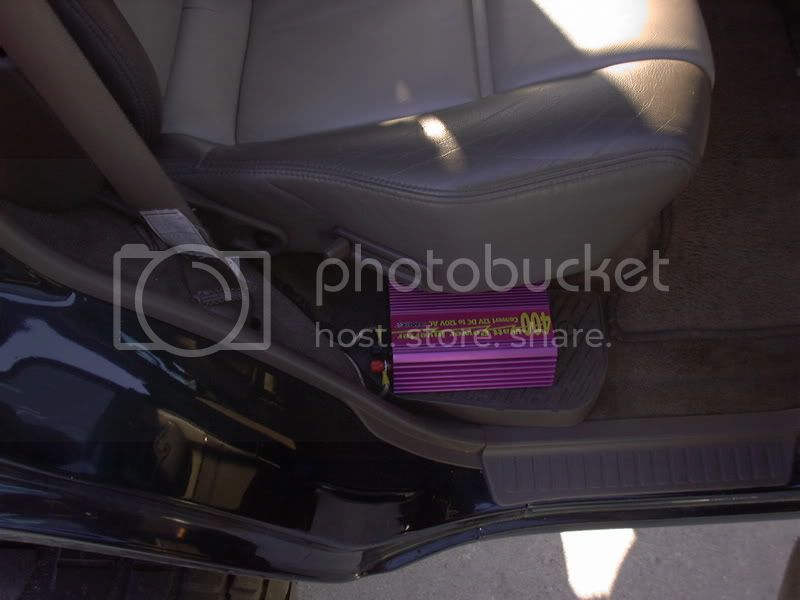 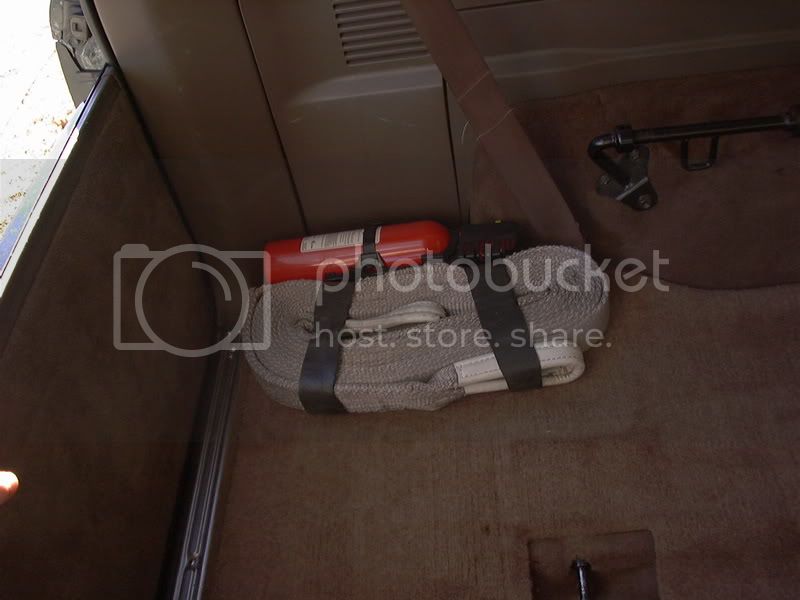 I also have an Audiovox remote start/alarm. Which you know is an absolute must in south Texas....for the a/c!
Last edited: Dec 27, 2006

And since I don't have a laundry list of cool mods, enjoy some pictures of the cruiser and me having a good time.
North of Phoenix, AZ 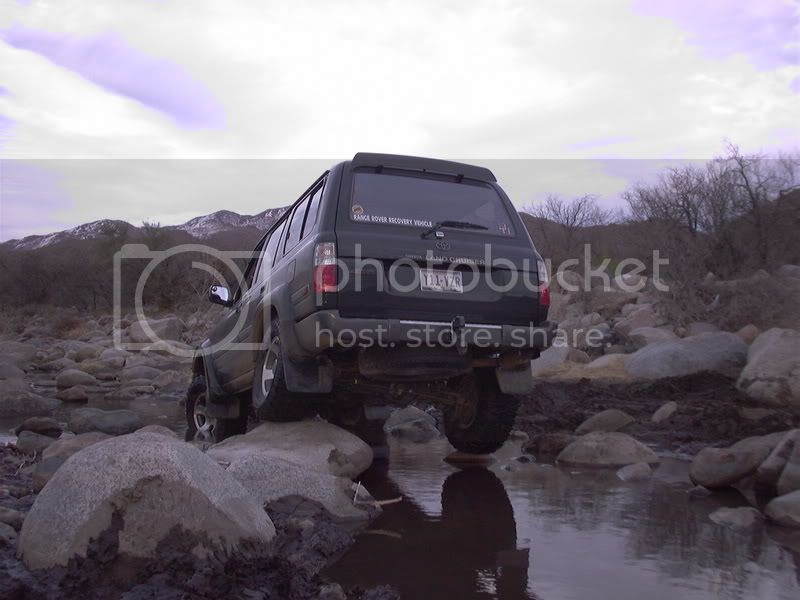 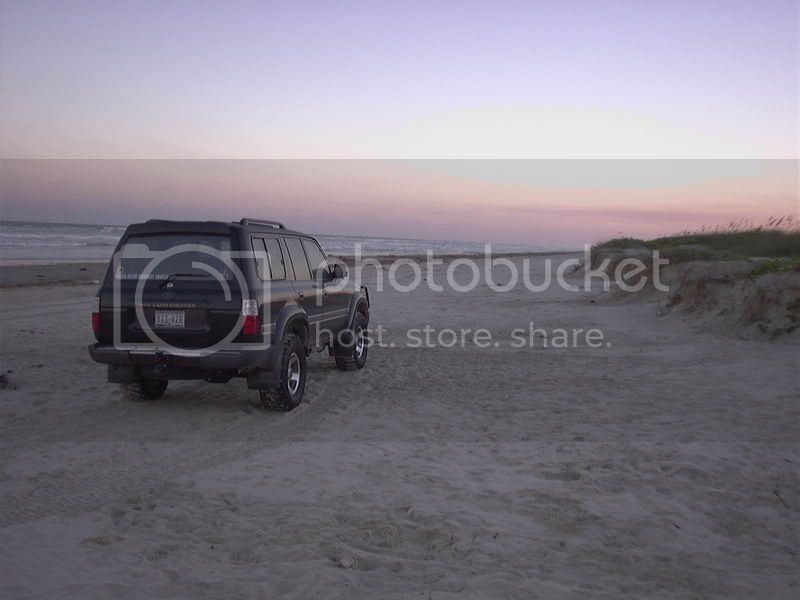 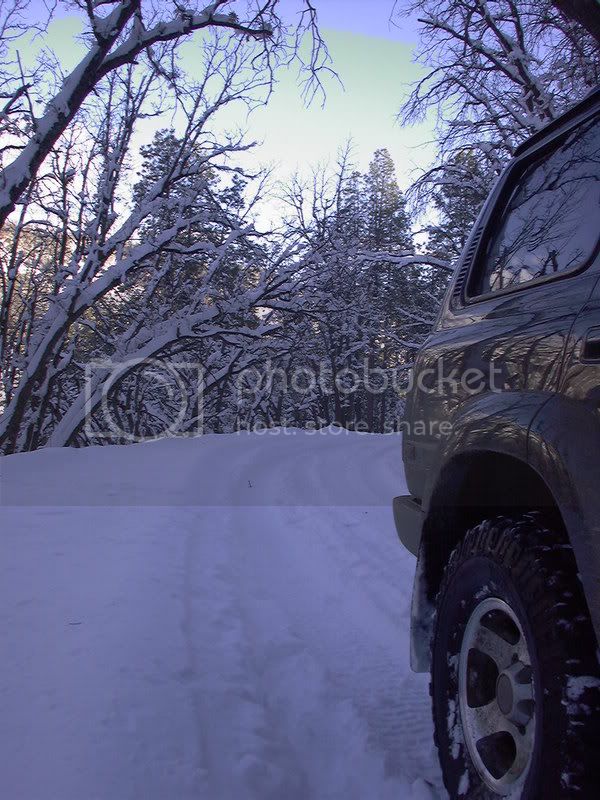 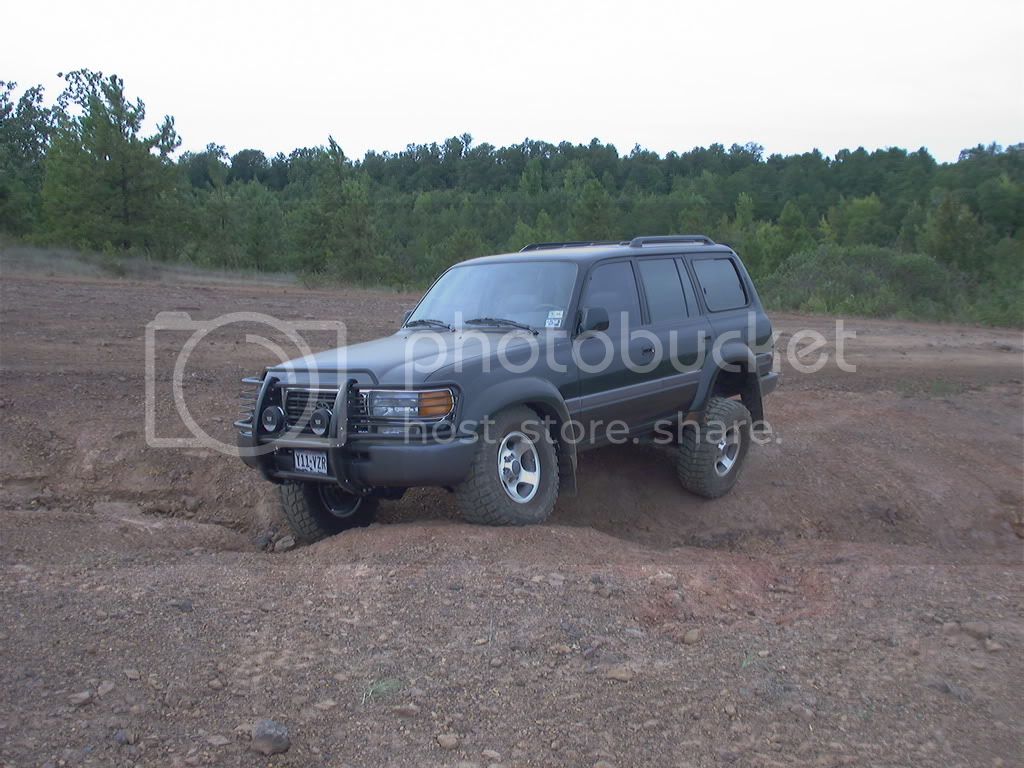 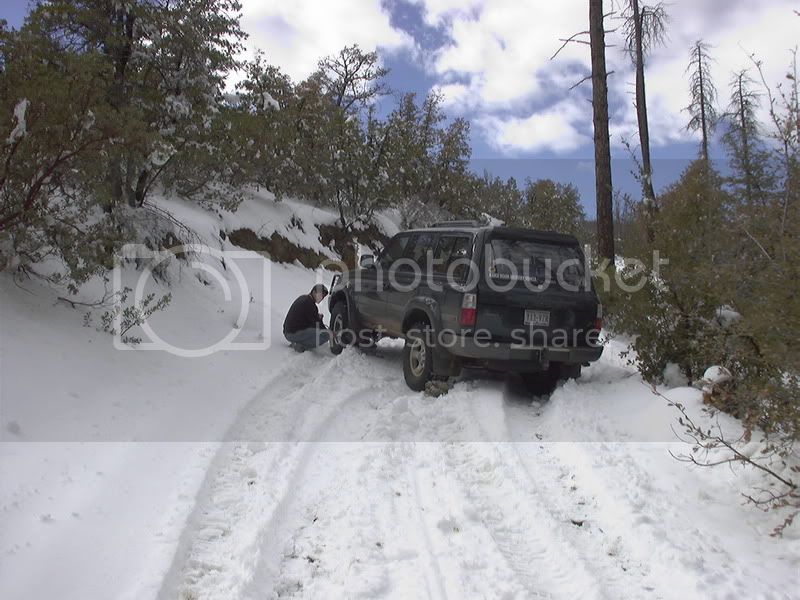 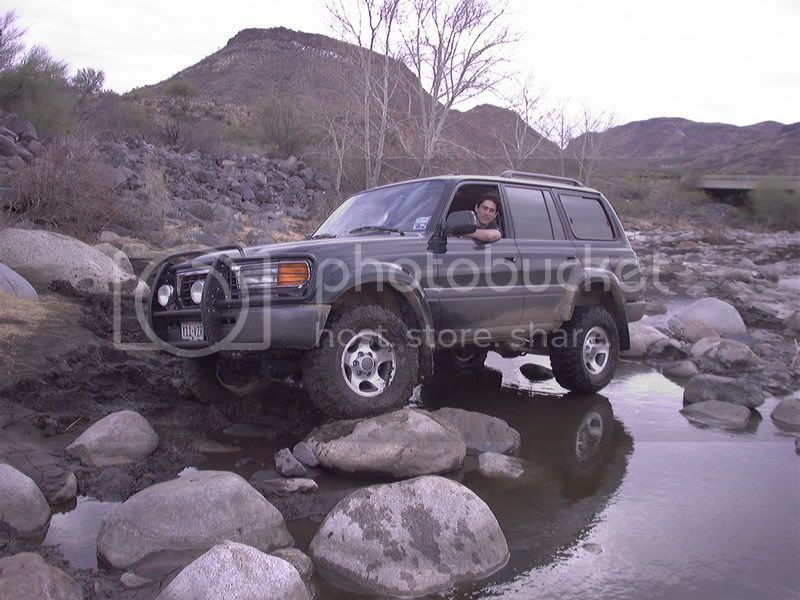 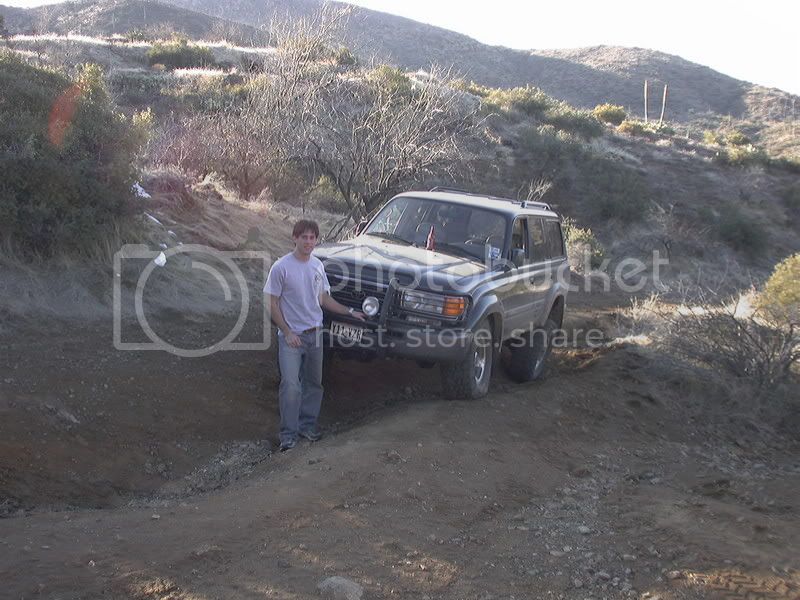 Nice job. You have done well, I hope to take my 80 in the same direction as you! If you were to do it again, would you do your mods in the same order? If not please expalin. Thanks

Keep up the good work, but don't drink and drive.

drsales said:
Nice job. You have done well, I hope to take my 80 in the same direction as you! If you were to do it again, would you do your mods in the same order? If not please expalin. Thanks
Click to expand...


Well I'm happy with the path so far. My biggest issue is now lift higth since the weight of the bumpers pulled it down quite a bit, so I have to upgrade. But I do like the order I did most other mods in. Also an issue I had with the lift was I had to keep low because anything higher and I wouldn't fit in my old single panel garage doors. I say it greatly depends on what you want your rig to do, I wanted somthing I could enjoy but nothing hard-core, so for example bumpers and sliders where low on the list vs. lift and tires. Even with the new bumpers I don't want to have to "use" them, especially after I got them all pianted up.
Last edited: Dec 27, 2006

Great truck Bear....what exactly did you do to the trim molding...is it factory? It appears it does not fit end to end of the vehicle and seems to be wider...or is that an illusion?? What paint did you use?
airlaird

airlaird said:
Great truck Bear....what exactly did you do to the trim molding...is it factory? It appears it does not fit end to end of the vehicle and seems to be wider...or is that an illusion?? What paint did you use?
airlaird
Click to expand...


Just the factory door molding. If you're looking at the picture of my junk without the flares, then yes the molding doesn't look right. It's short due to the width of the flare on the fenders. Which is probably why I really dislike the flare-less look. But the paint I used was silver Dupli-color bumper paint. All I've seen is either silver, gray and black so it should be esay enough to find. I'm behind as hell on this rig of the week, I should be calling it rig of the mid-week or somthing. I'll try and get some close ups of the trim and some other stuff later today.

Nice write-up and thanks for contributing. Curious about the Castrol oil giving you better gas mileage??

Romer said:
Nice write-up and thanks for contributing. Curious about the Castrol oil giving you better gas mileage??
Click to expand...

Very nice - Thanks for sharing. Nice pictures too.

Nice Rig Bear
"Bumped timming up to 8-9* BTDC" What performance increase do you get by doing this? How does this affect engine wear or MPG? 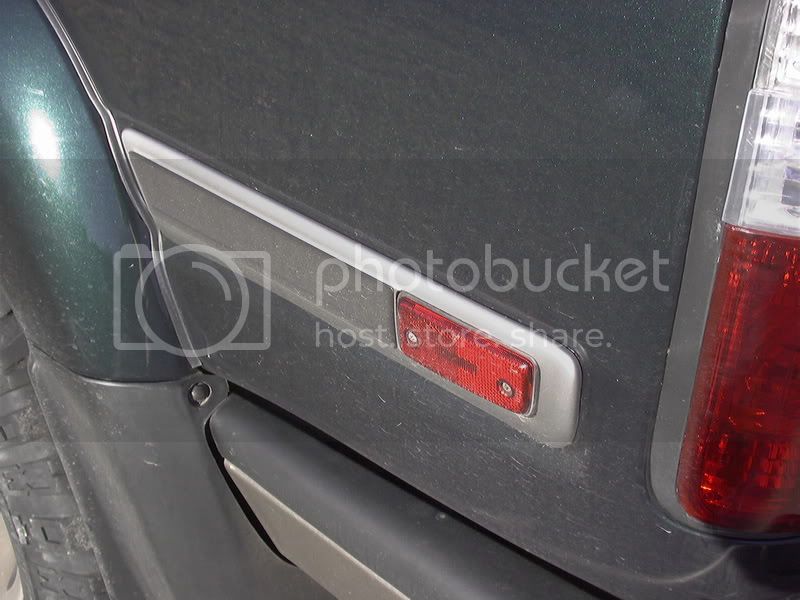 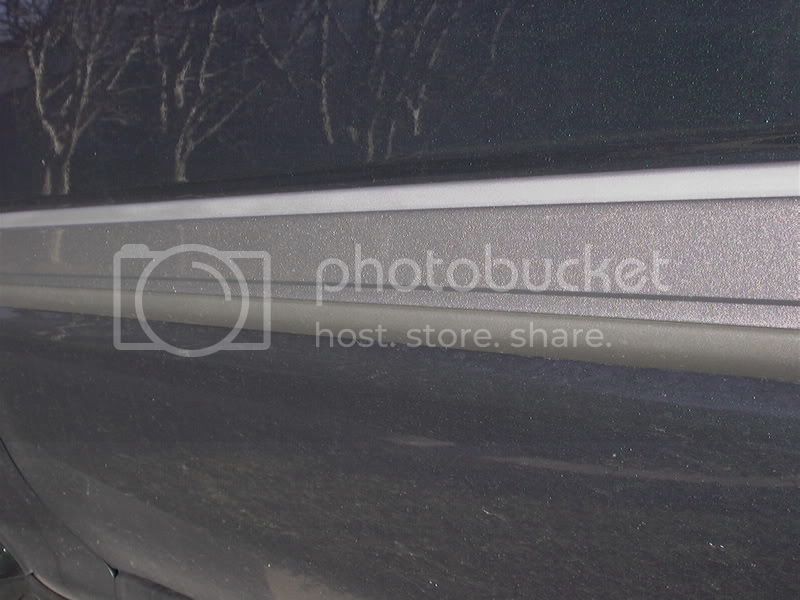