I've been thinking for some time now that we need a thread dedicated solely to the Owner's Manuals (OMs) that went with our vehicles when they were sold new.

(Many owners wish to get the correct OM for the vehicle .. but how else will they know which one is applicable to their vehicle, other than by perusing a thread like this.)

There's plenty of different OMs because here's just what I've managed to collect so far: 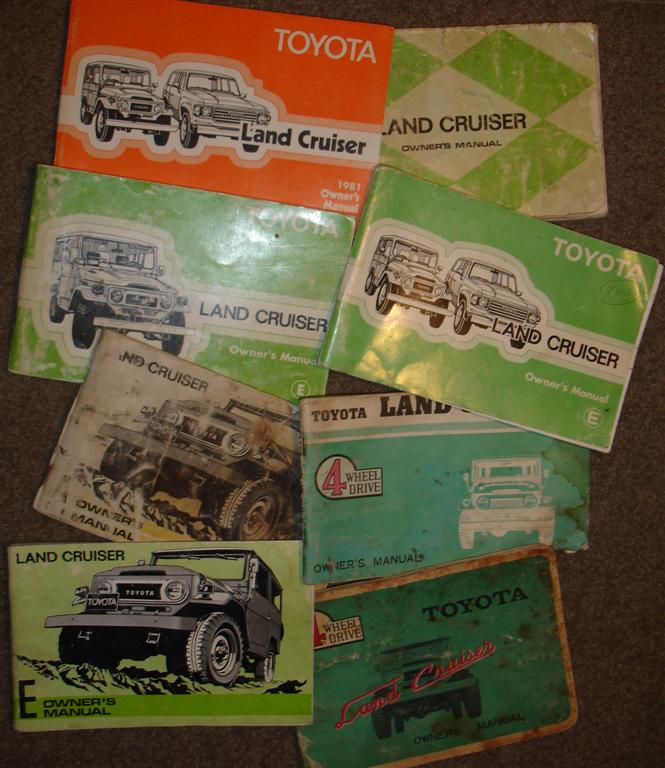 To make this thread most useful, I think it is good idea for those of us who are certain they have the original Toyota-supplied OM for a particular vehicle to post up: 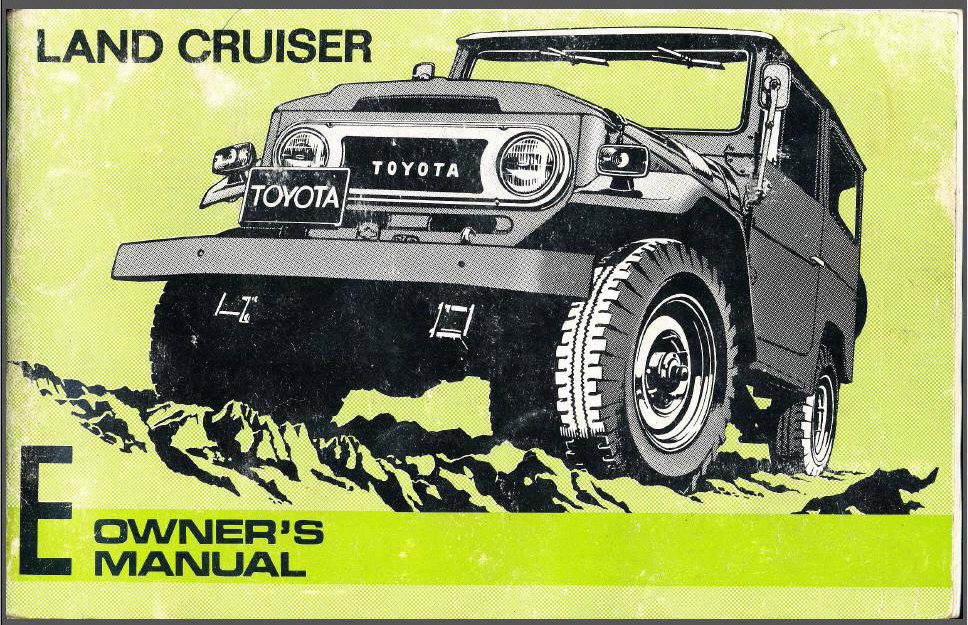 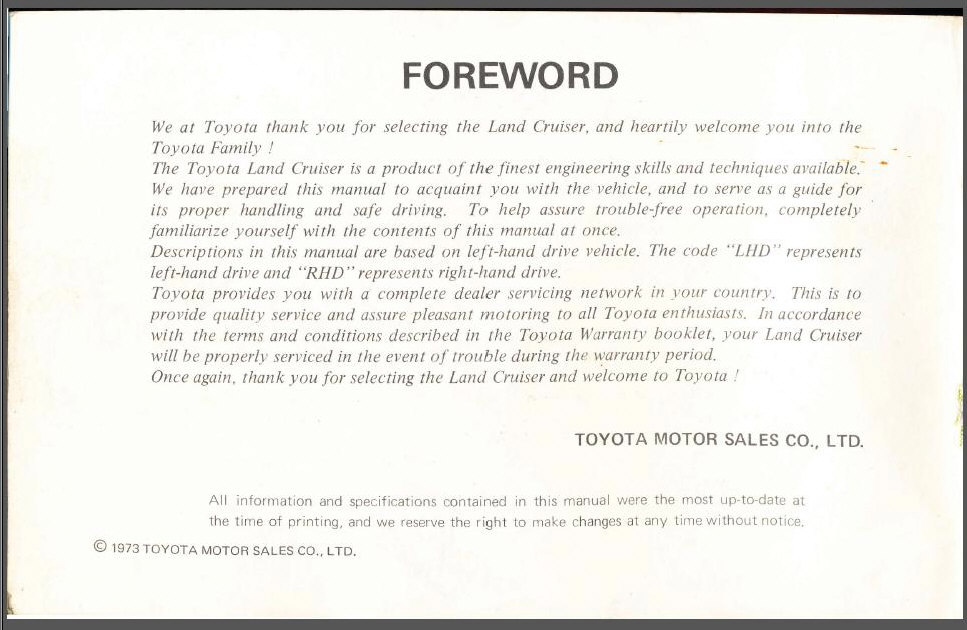 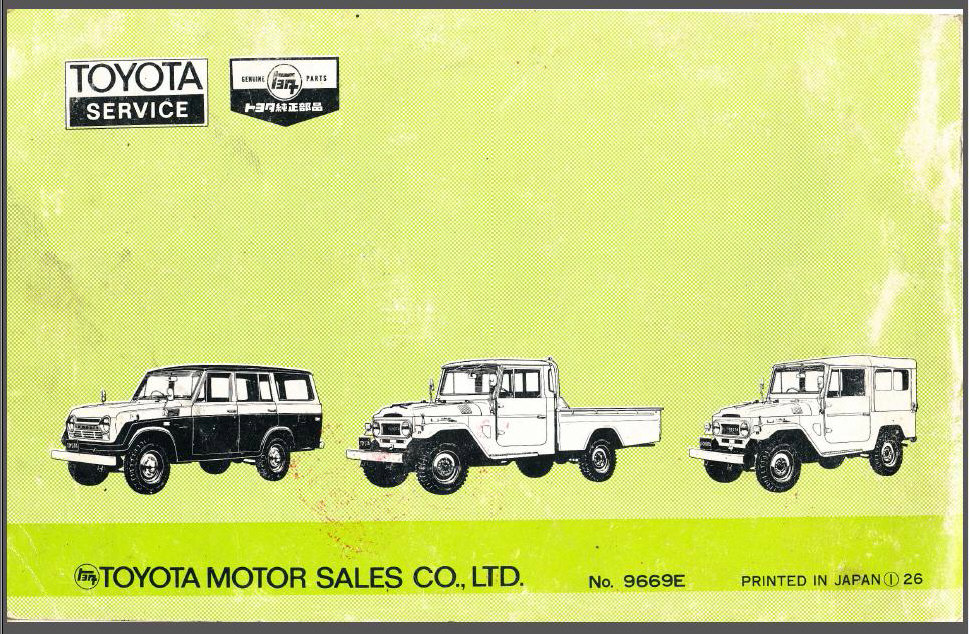 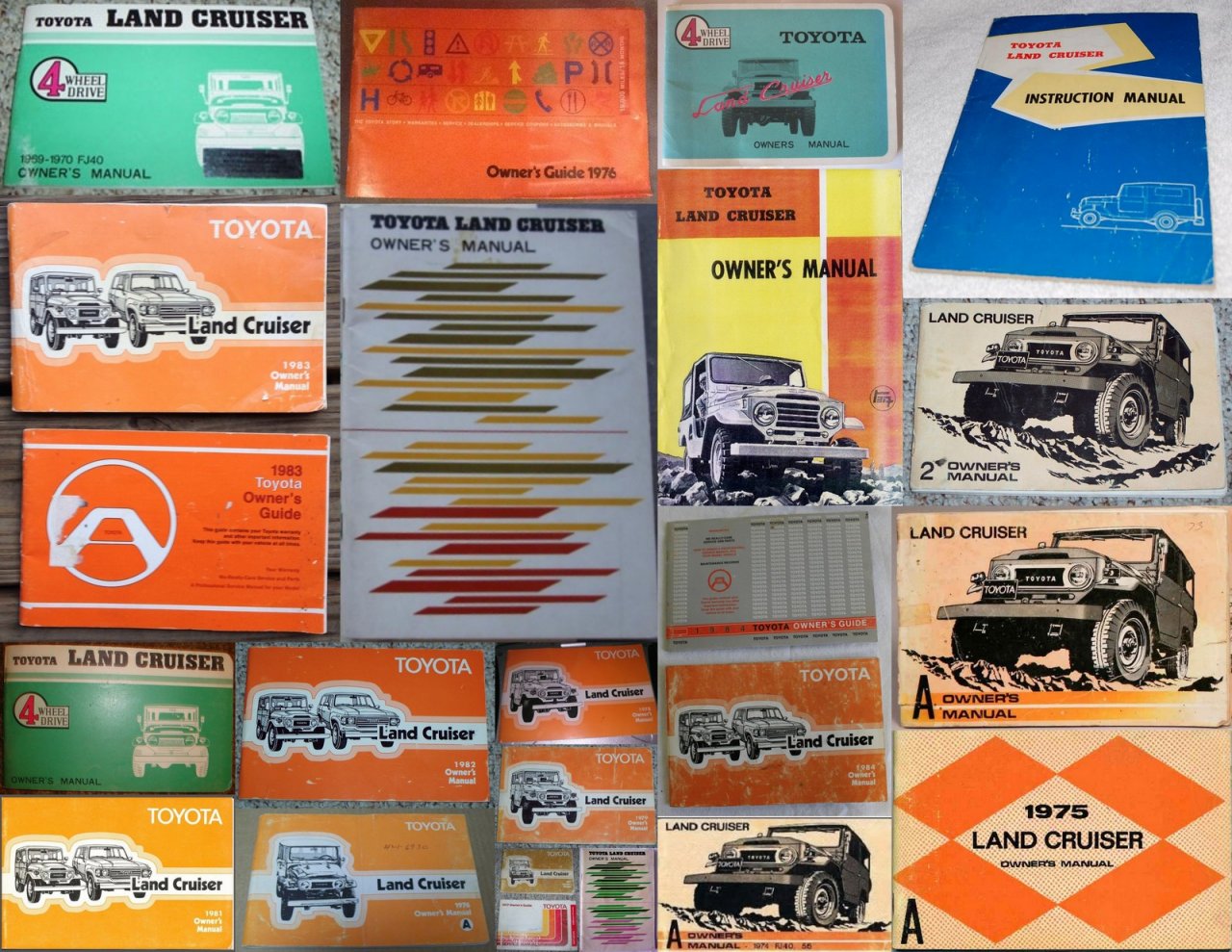 I'm familiar with your "Refurbishing an Early Tool Roll thread" but I had forgotten it contained this information on OMs:

Item 13 in the early tool roll Content List is the Operation Manual. Not surprisingly, this manual is often missing from the kit. Including the correct manual will provide a nice finishing touch to a refurbished tool roll. But finding a manual in decent shape may prove to be a challenge.

Images of the original covers from North America FJ40 manuals follow. These are from (Mud) and the internet. Some of the manuals do not have dates; dates provided are estimates based on available information. Please post corrections or additional manual images.

These manuals were provided with the large tool rolls.

1963 : This manual includes an image of a VIN number beginning with '3', manual number 6040, cover is dark green/light green/purple.

Operation Manuals or Owner's Manuals were not included as part of medium tool rolls or zipper pouch tool kits. Even so, having an original manual will complement any OEM tool kit. These are examples of North America FJ40 Owner's Manuals from 1972 on.

1974. Undated versions of this manual were included in some 1974 vehicles.

1976. Owner's Manuals were completely redone in 1976. For the first time, the content was written in the U.S. and then sent to Japan for printing. Prior to 1976, the manuals were written in Japan in Japanese, and then translated into English. The information presentation was changed to include more photographs, and key information was listed on the back cover for easy reference.

Owner's Guides were introduced in 1976 as well.

1978. Cover image perspective is somewhat lower and to the passenger side than before. New details include the rear vent windows, fuel tank door, radio antenna, sun visors, square-head side view mirrors, and driver side only tow-hook. The upper hinge appears to be missing from the passenger door. 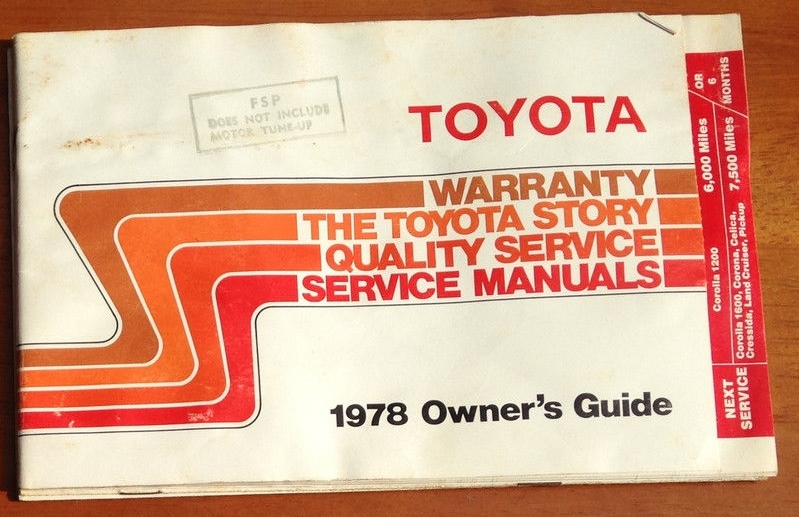 1979. Cover image modified to reflect the new square bezel; new detail includes the passenger side head-rest. The front license bracket is moved to the left and outlined, making it more visible.

Separate "California Only" versions of the Owners Guide are produced.
View attachment 1084635

1981. Cover image modified to add the FJ60, the smaller image includes less detail than before.

People appear on a manual cover, for the first and only time in this collection. Wonder what message Toyota was trying to send with these vignettes.
View attachment 1084638

Your contribution to our knowledge-base exceeds my imagination Bill!

PS. I hope you don't mind me copying this stuff over here. I searched for threads on Owner's Manuals and found nothing of consequence before starting this one. (I reckon it's a good idea to have all our OM information in its own dedicated thread.)

And while technically an FJ25 is not an FJ40, it always has been to my unsophisticated mind so here's another amazing post from that thread:

Item 13 in the FJ25 tool roll Content List is the Operation Manual. Images (from Mud) of the original covers of FJ25 manuals included with tool rolls follow.


And this pic (also from wscbill's tool roll thread) shows how an Owner's Manual was actually given its own pocket in the early tool rolls (which is something else I'd either forgotten or overlooked): 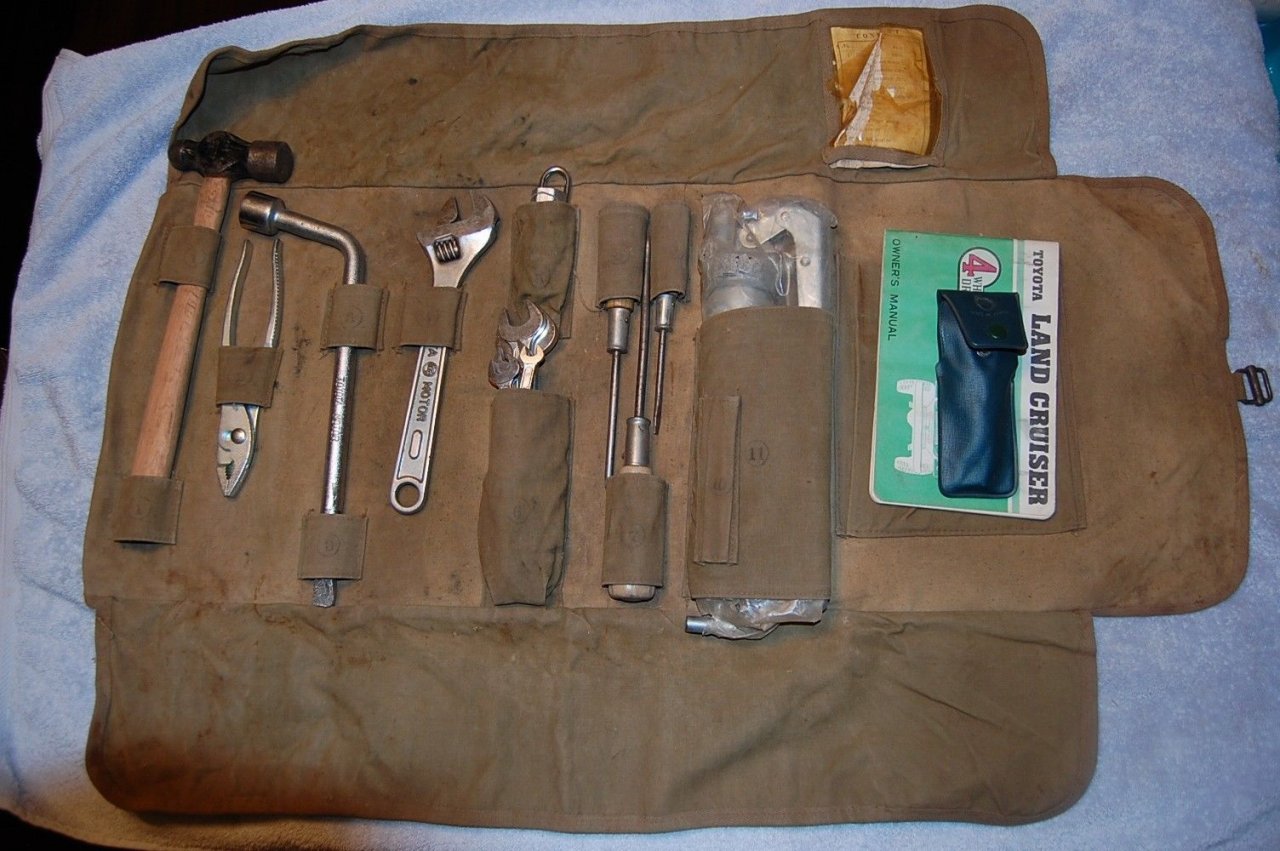 lostmarbles said:
I reckon it's a good idea to have all our OM information in its own dedicated thread.
Click to expand...


Thanks Tom, I agree. Looking forward to seeing more details on these Owner's Manuals.

Thanks Tom!! Always looking ahead!! 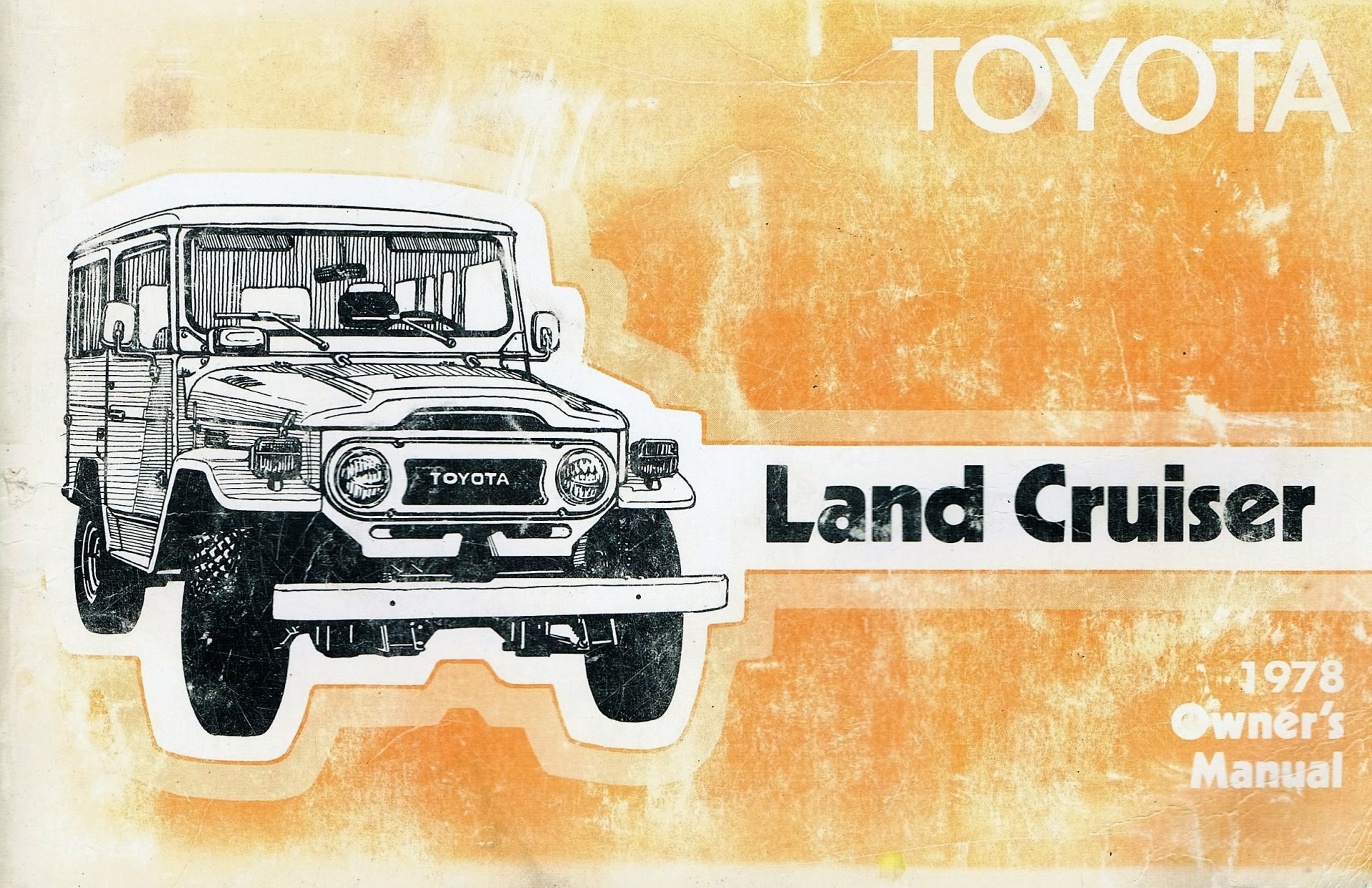 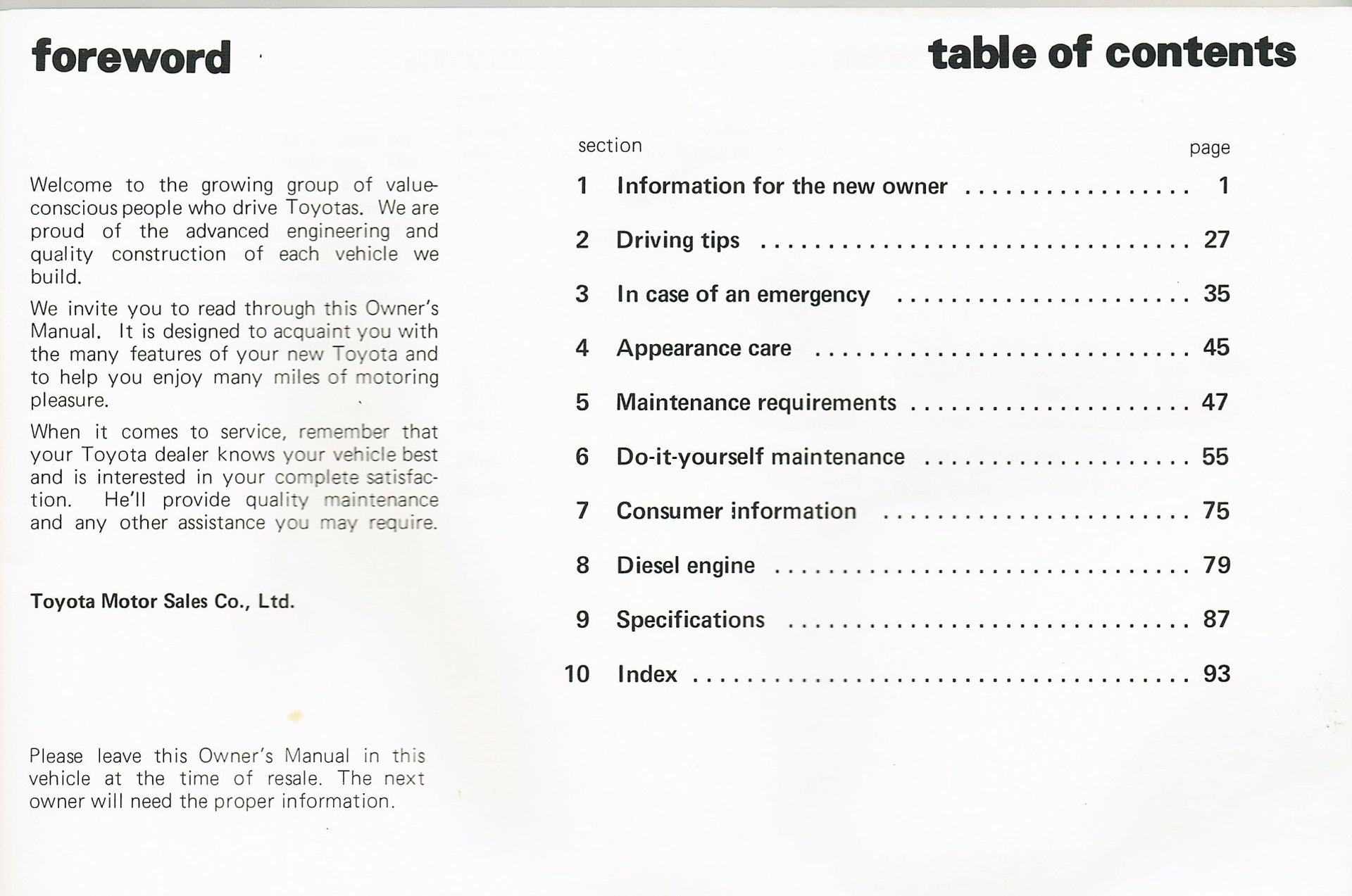 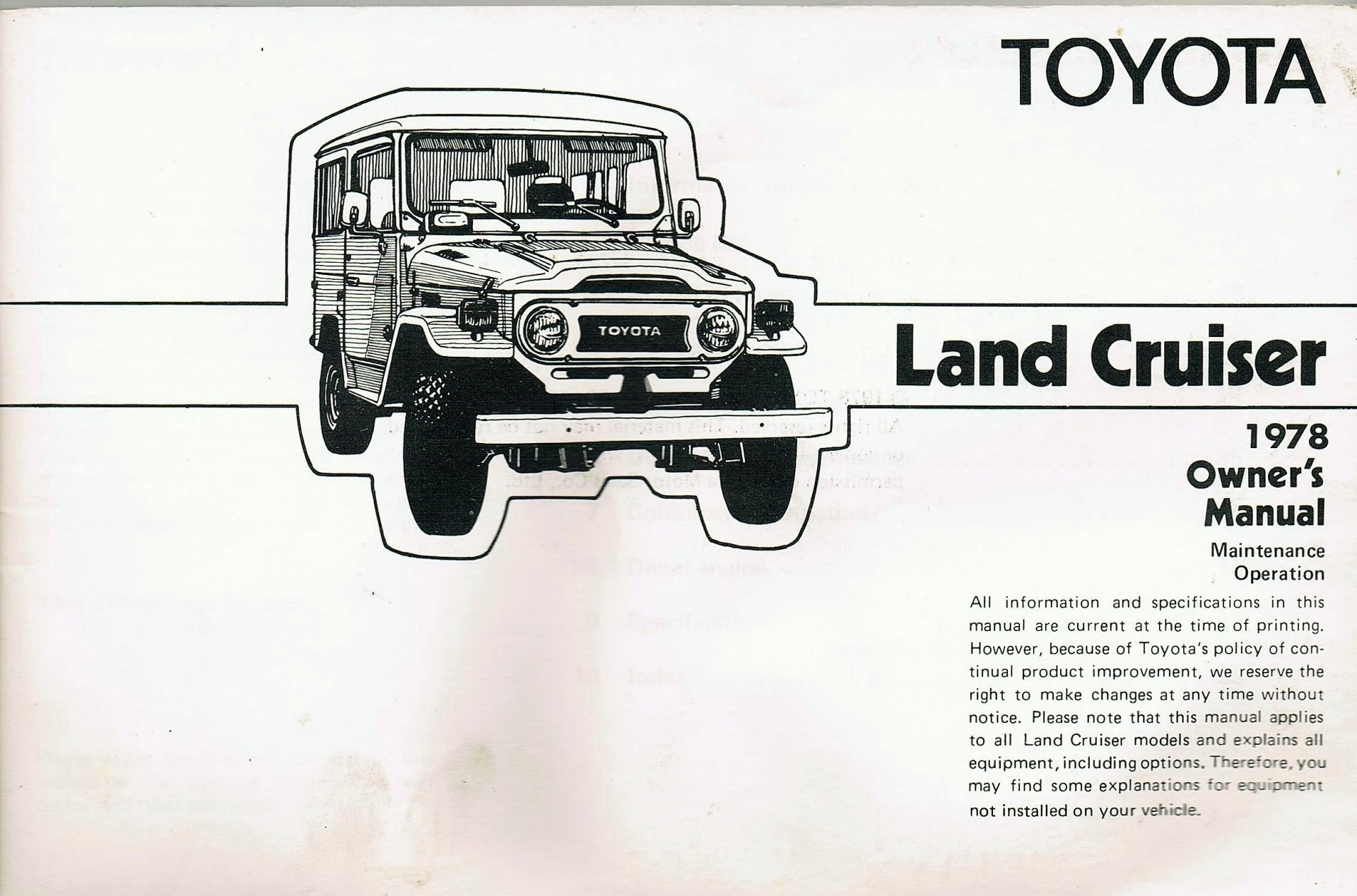 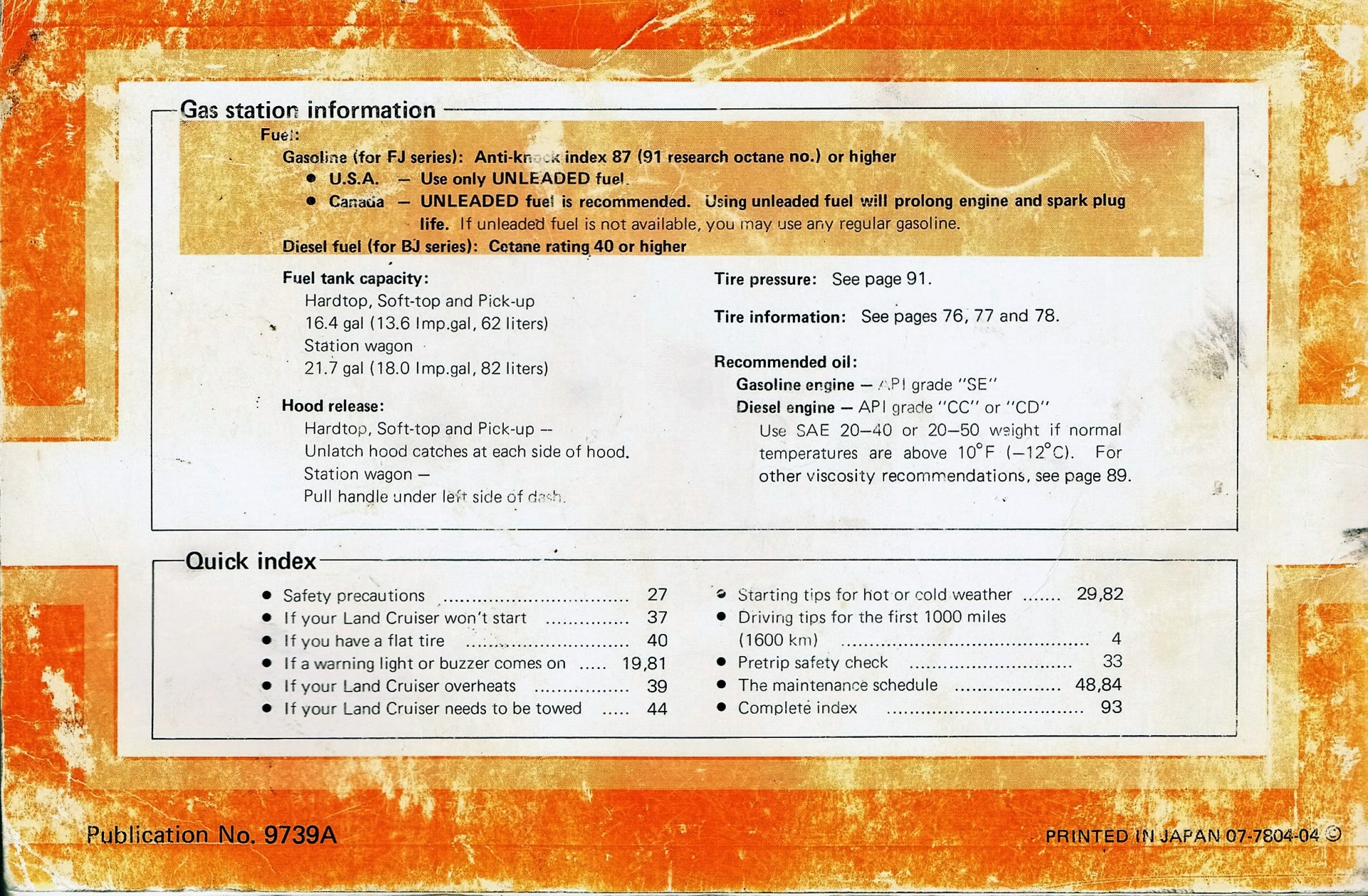 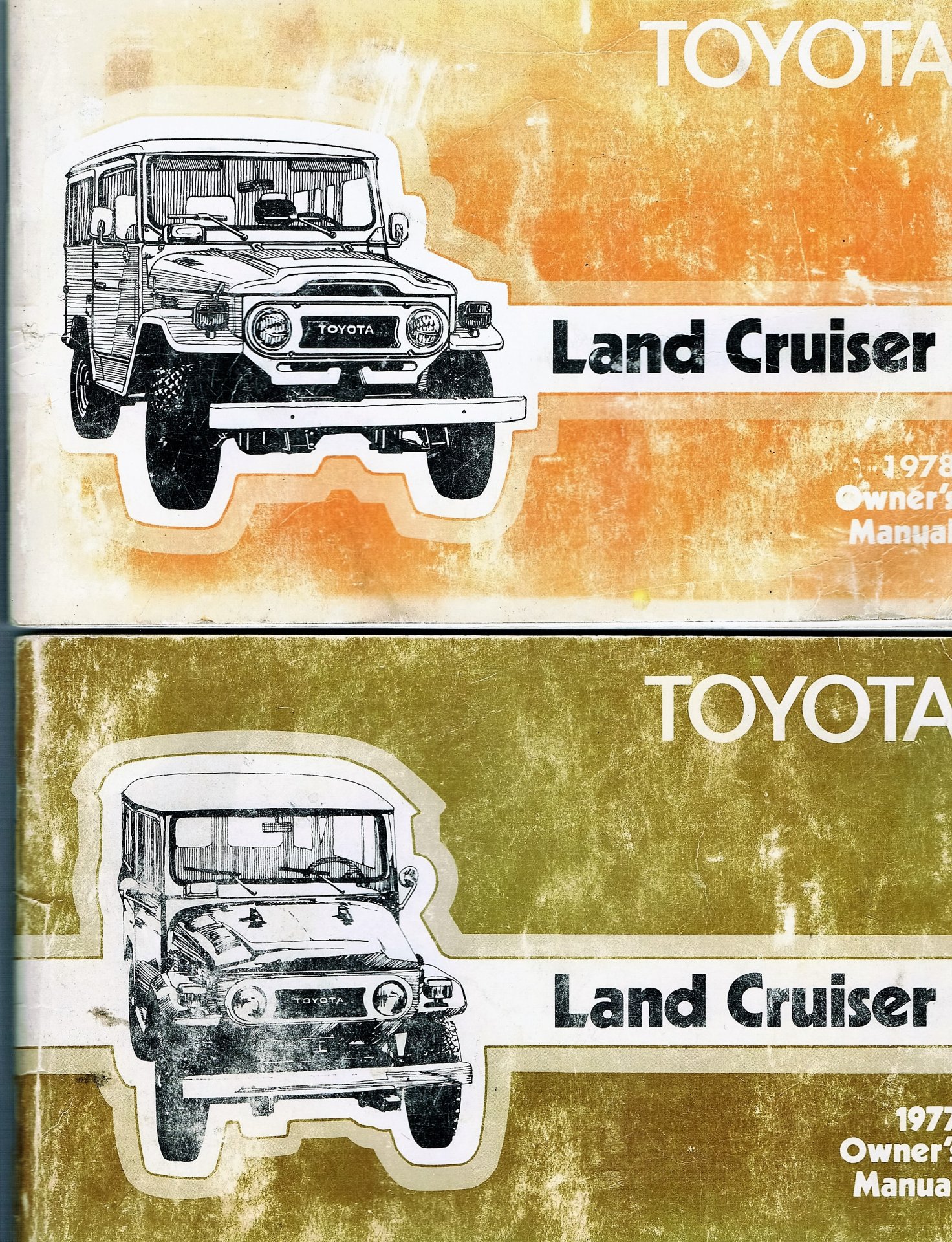 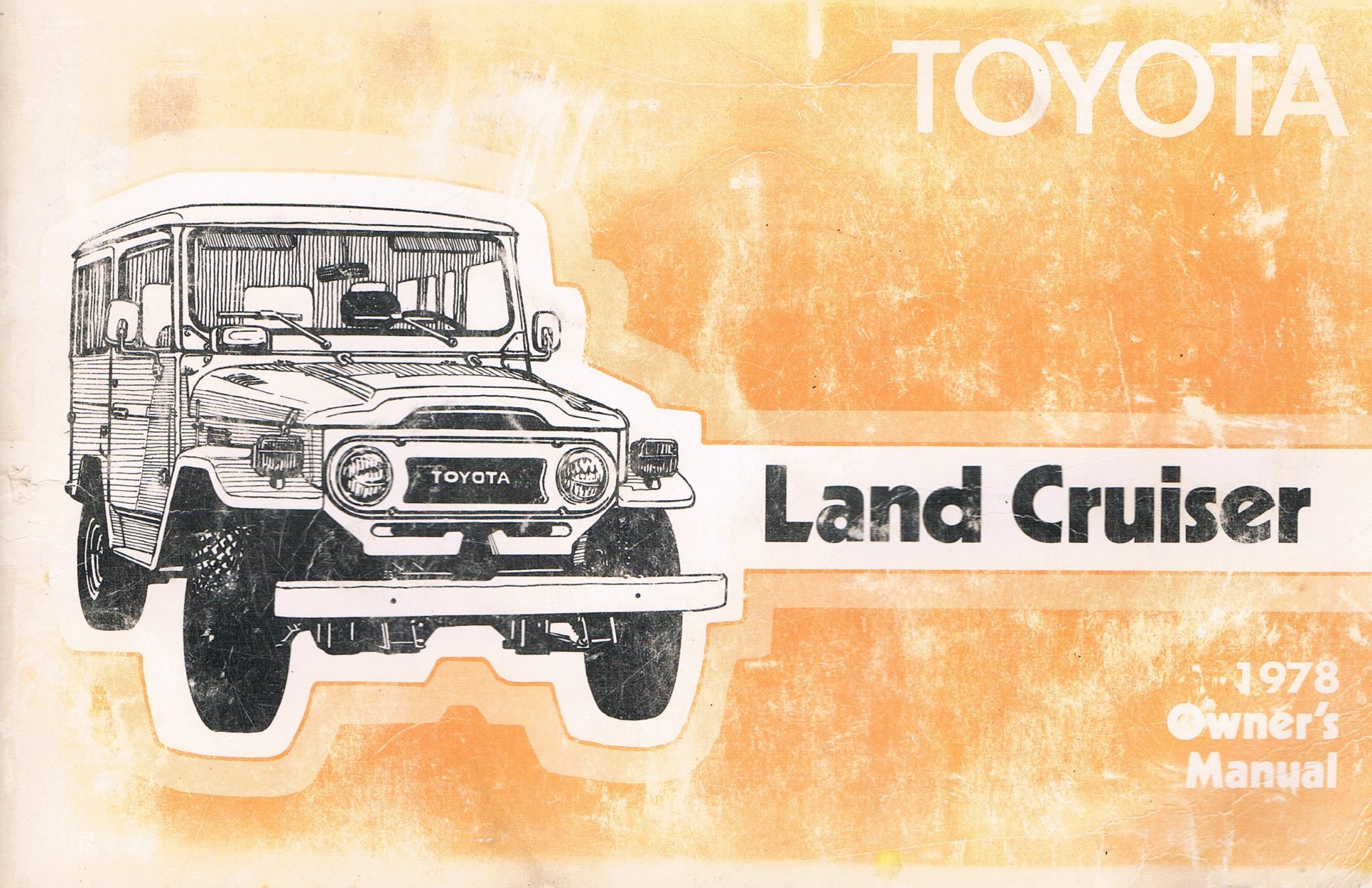 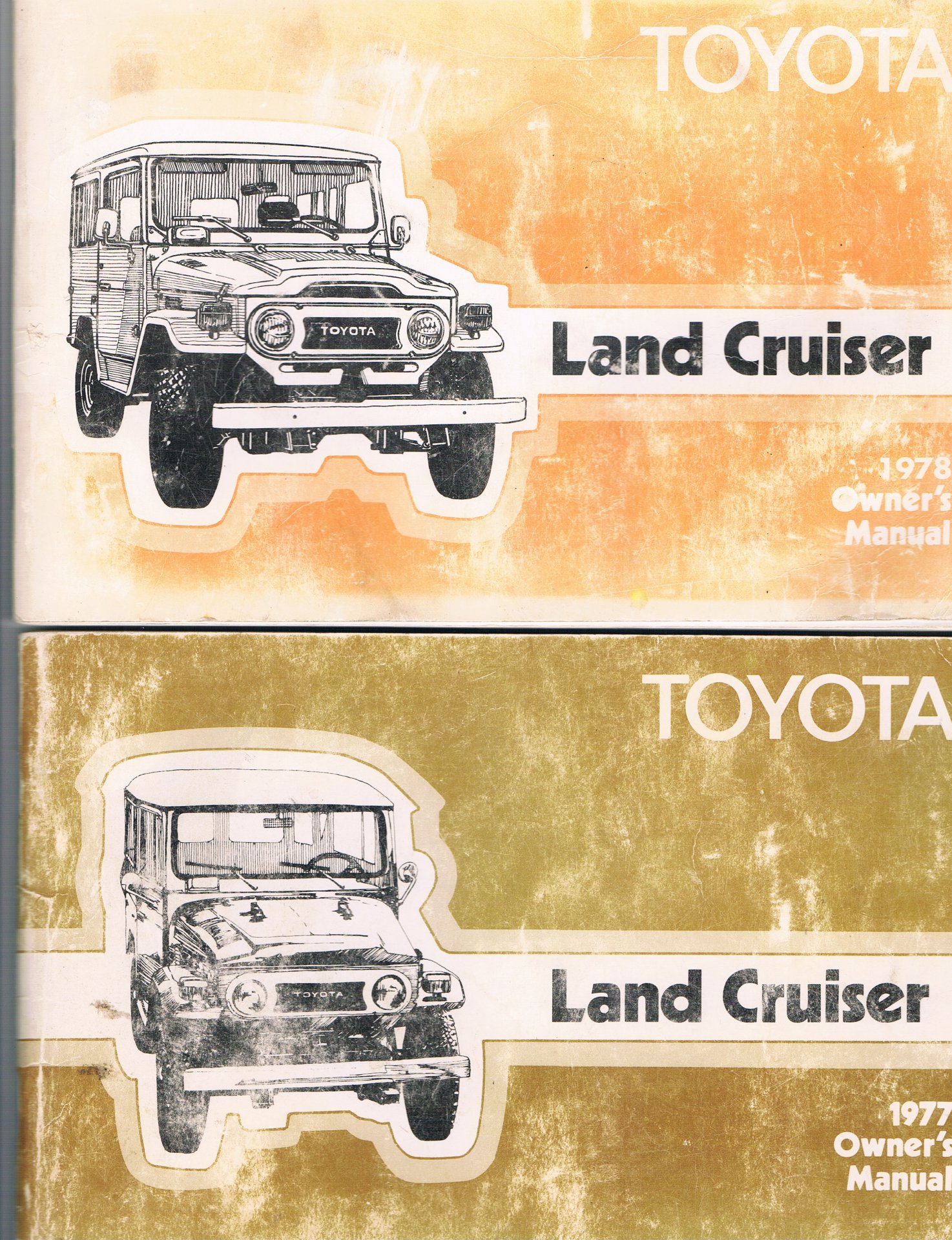 I get the impression that "orange" is a colour Toyota used predominantly to distinguish USA-market OMs from others (and as such, I've noticed that from April 1972 ... when the first diesel 40-series was introduced as the HJ45 ... they exclude diesel information that is included the the "green" versions).

Edit later: As this thread has progressed, it has become apparent to me that there are orange-coloured OMs that include information on diesel 40-series models as well as those that don't...(and both often bear the same publication number/code).

But is that 1977 OM really "brown"... If so, it's very interesting to me because I think it could be the first time I've seen a brown one..

I get the impression that "orange" is a colour Toyota used predominantly to distinguish USA-market OMs from others (and as such, I've noticed that from April 1972 ... when the first diesel 40-series was introduced as the HJ45 ... they exclude diesel information that is included the the "green" versions).

But is that 1977 OM really "brown"... If so, it's very interesting to me because I think it could be the first time I've seen a brown one..

The 1977 manual is actually a mustard/greenish color, but who knows it might have been brown at one time. Although the internal pages of the manual are in above average condition the cover shows some signs of being used and the cover is slightly faded.
Hopefully others will chime in and include some pics of a 1977 manual for color comparison.
Thanks for starting this thread as it will be an interesting one.

Thanks again Mike. I've noticed the rear cover on the later Owner's Manuals appear to include a date code. So I think your 7804 means April 1978 was its print date. 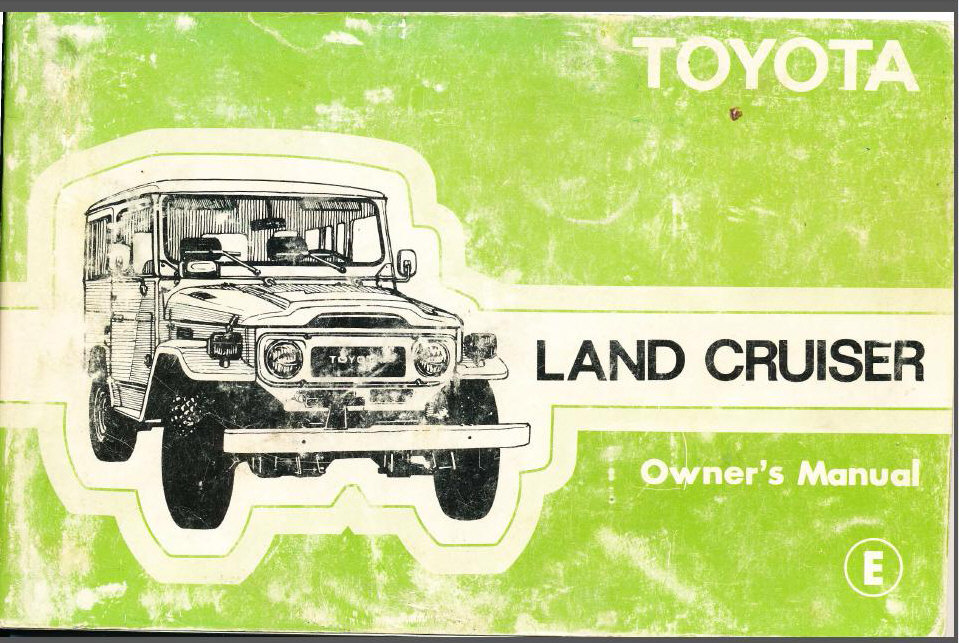 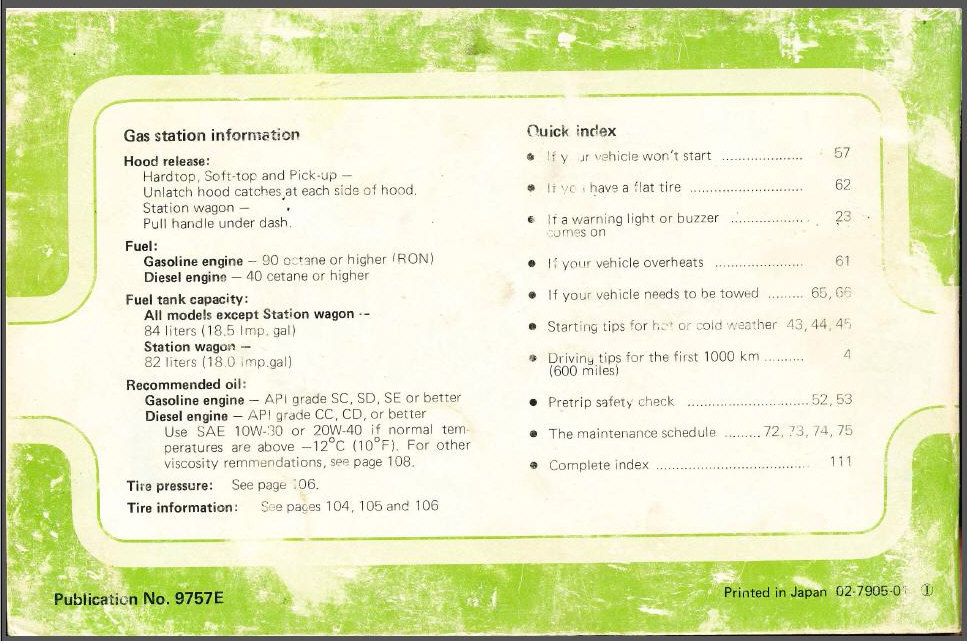 So if I'm reading my date-code correctly, this owners manual was printed in May 1979 (just 2 mths before my BJ40 came off the production line).

PS. Since the rear cover has the date code, I don't need to show the internal page where the year 1979 is again typed.

EDIT: I've been wondering what the "A" and "E" represent that often appear on the covers and/or on the ends of the Publication Numbers. I'm thinking "A" could be "America" (Edit: or America + Canada) and "E" could be "Europe" (edit -...or Europe + Australia + NZ). I'm hoping to be able to work out such things once the thread has had more-widespread input (however long that may take)....
Last edited: Sep 6, 2015

I've just gone through my Owner's Manual collection and recorded for each one the print-year (when I could find one) and the print month too (when a full date code was provided).

So here's my first pic again with that information included: 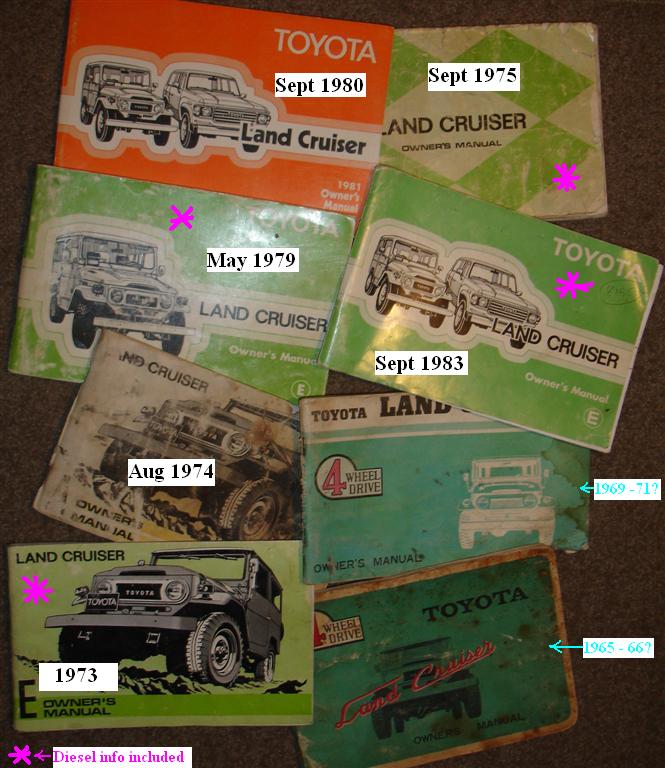 I've also shown which OMs had information on diesel models (because people in the USA for instance may not have that diesel information in their orange-coloured versions of those same OMs).

The two OMs with the question marks over their print dates have no print-date-information on them that I can find. So I've given a year-range for each based on what @wscbill posted in his magnificent tool roll thread.

I have another OM but it is only in the form of a pdf file.. I was told it is a 1964 and this appears to be the cover page: 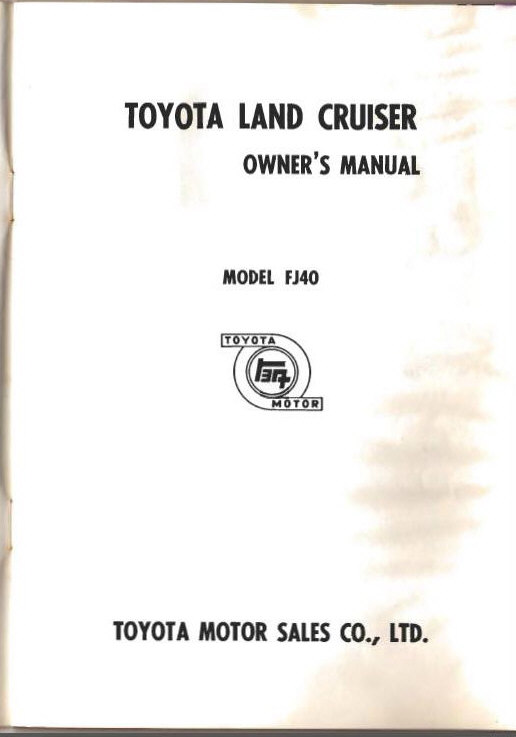 I think it may have come from @JohnnyC ?

However such a cover page doesn't appear in wscbill's posts, so perhaps it is an inside page rather than cover page? 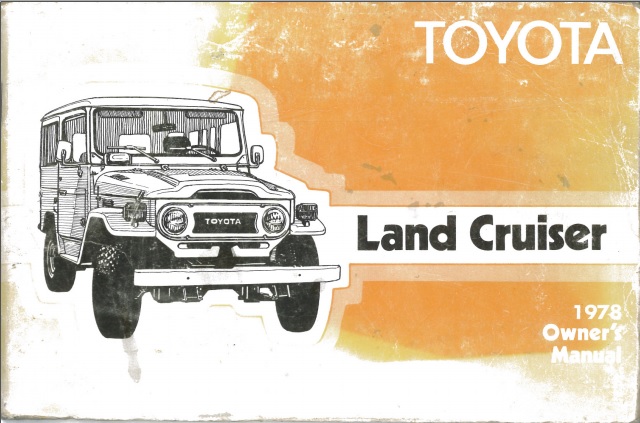 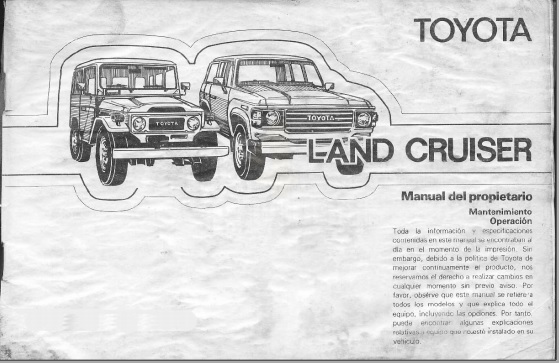 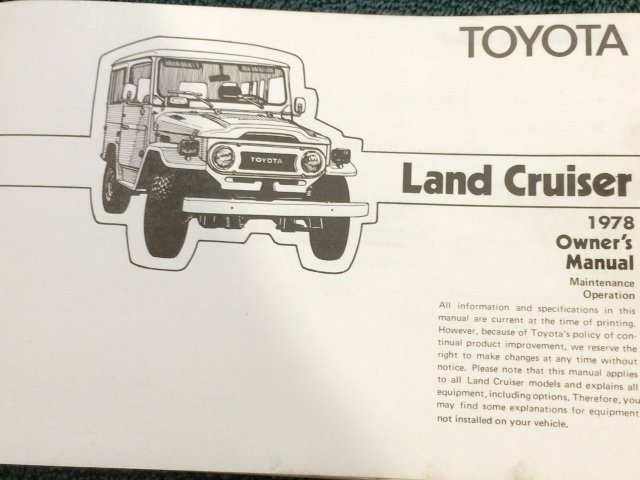 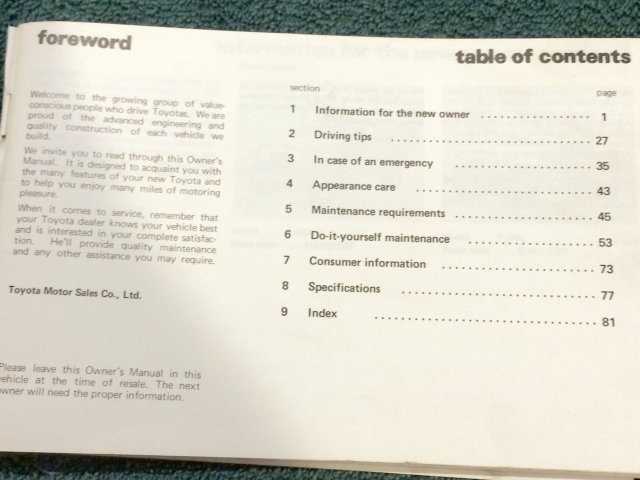 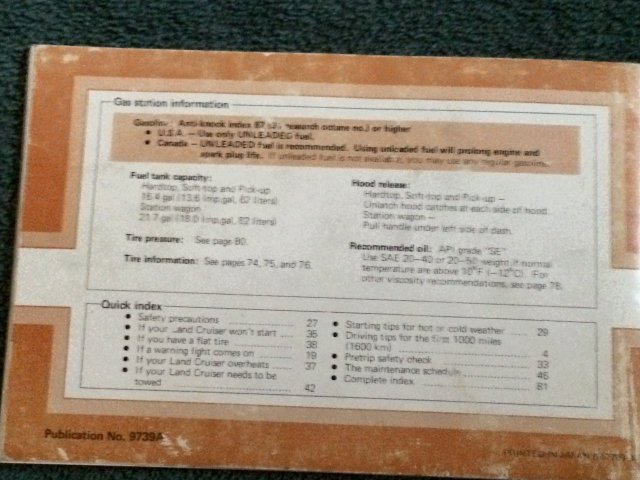 I knew I'd learn useful stuff.

So it looks like there are orange-coloured versions that include diesel information as well as those that don't.

Both yours and Mikes are orange-coloured and both are Publication number 9739A. Yours was printed Sept 77 and his was printed April 1978. His is 93+ pages and yours is around 10 pages less (without the diesel info)

(I didn't notice until now the diesel information appearing on the rear cover of Mike's April 1978 OM.)

Maybe the larger versions (with diesel info) were originally sent with vehicles destined for North-America/Canada... But if so, this begs the question of "why not give Canada the green versions?"

I guess Toyota was determined to use the orange colour-code for all exports to continental America?

Edit: And I note your rear cover appears more brown than orange on my computer so I suspect the brown colour I thought I saw on Mike's 1977 OM is really orange too. ..........And another edit later........I'm wrong ...... In 1977 it appears Toyota apparantly indeed went briefly to using a brown/beige colour for the covers
Last edited: Sep 6, 2015

So it seems that there are several version for this year. 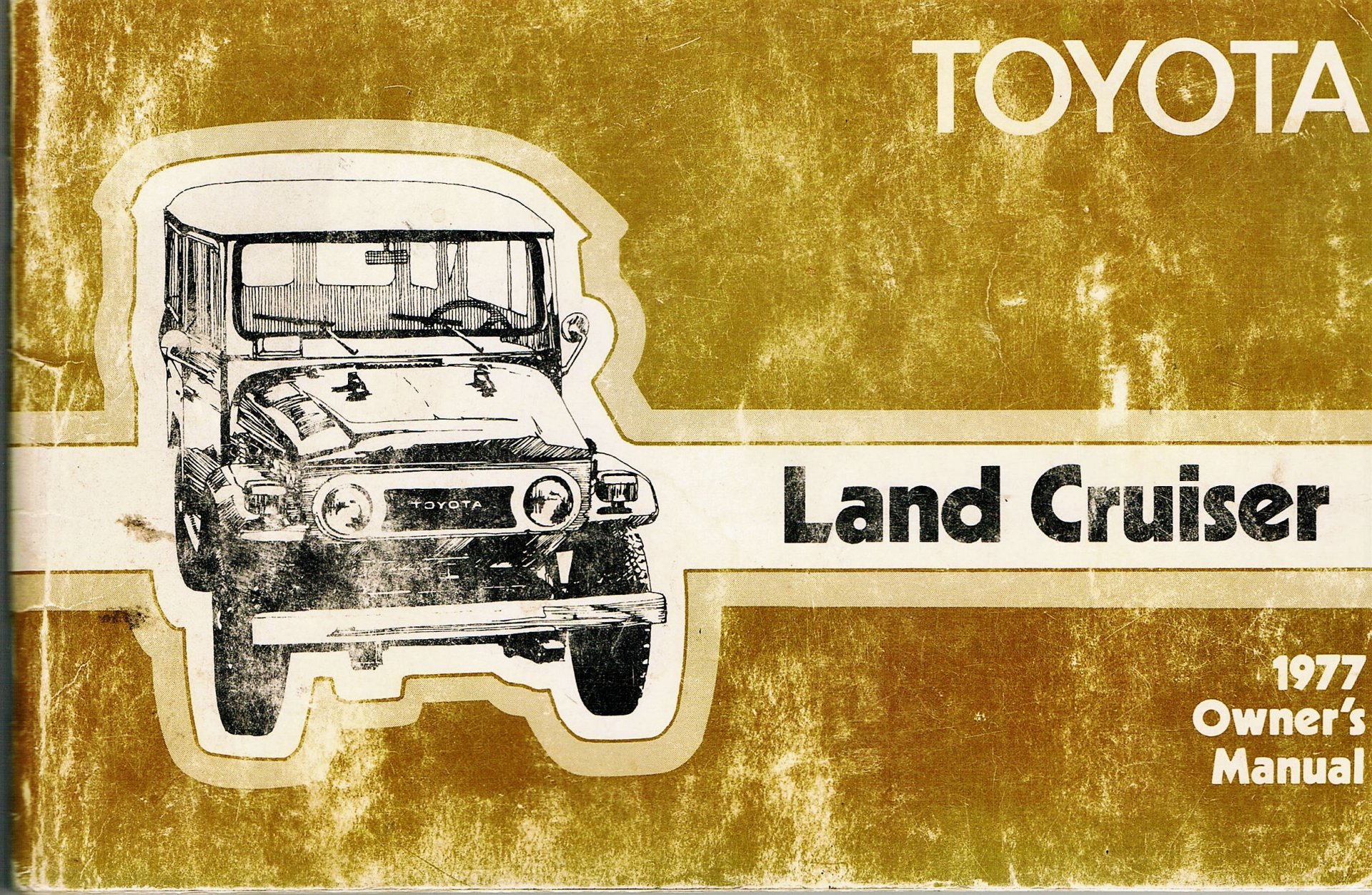 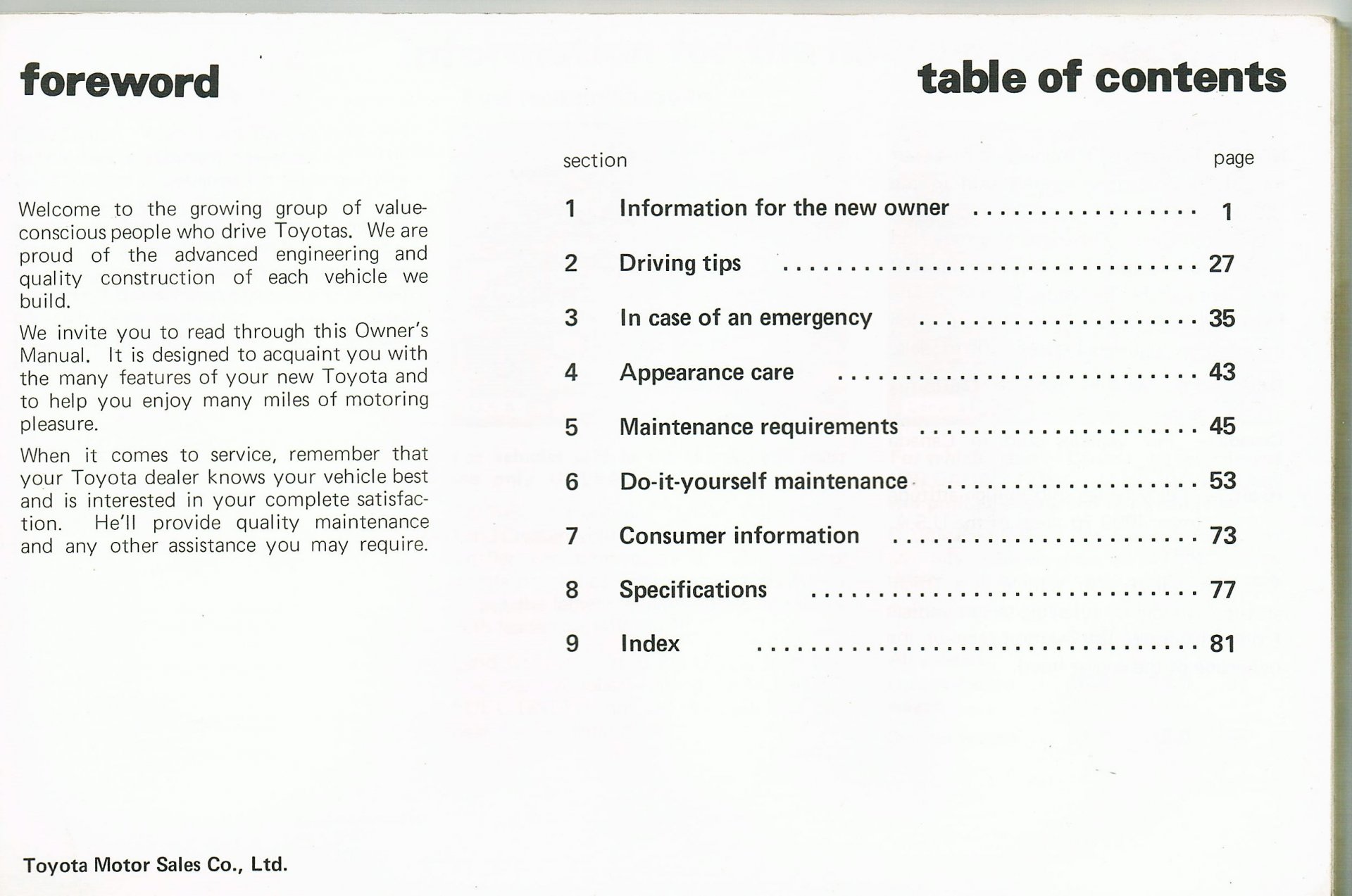 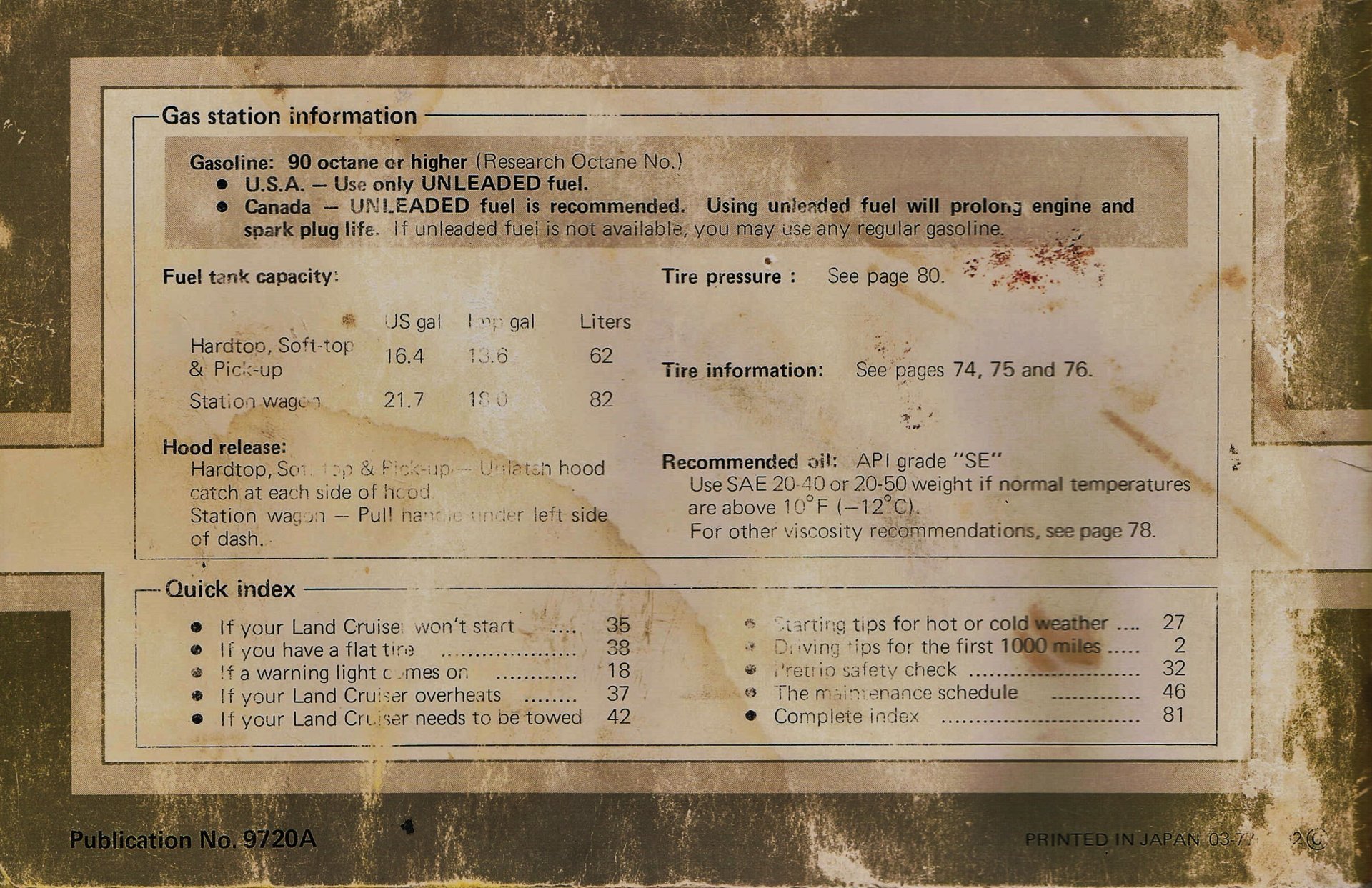 Tom, my 1972 FJ40 manual print date it is unfortunately no longer legible, I can barely read some of the date '0372XXXX?. 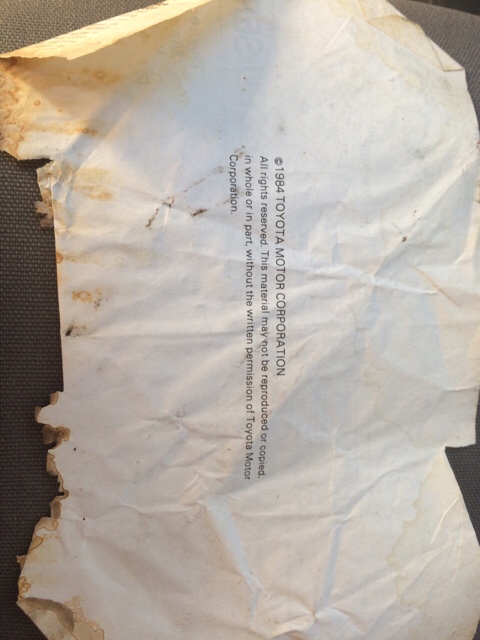 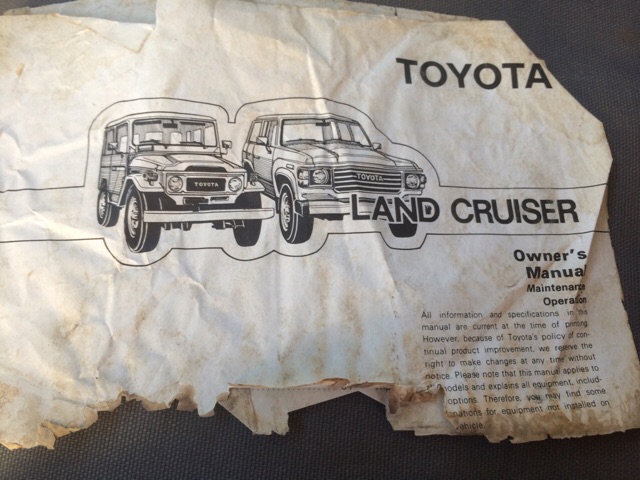 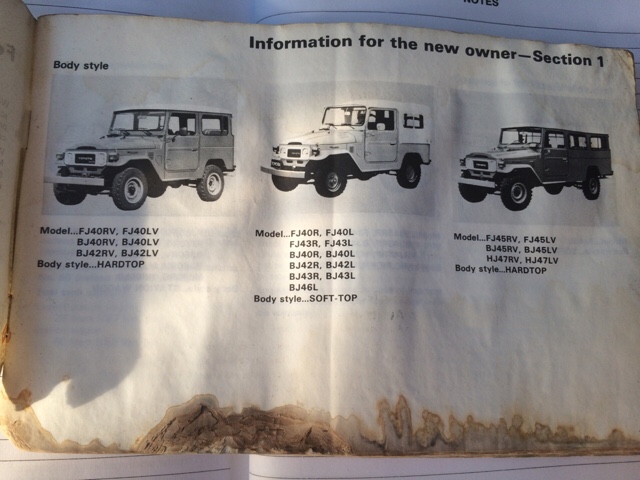 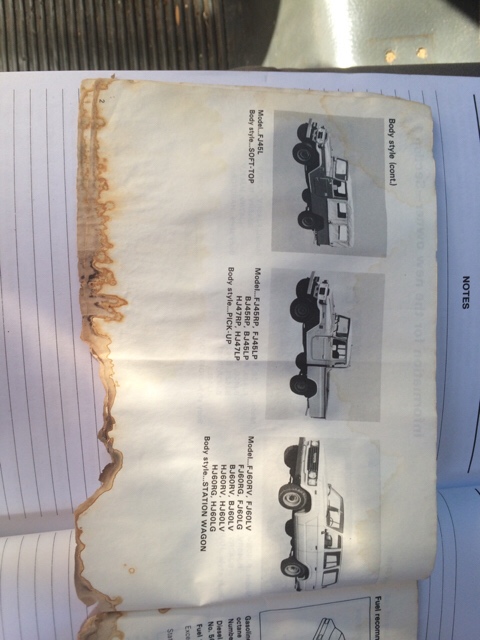 How to test cluster gauges? 3.4W test bulb set up? (Per manual)