New here on Mud although I have been lurking for the last couple of months. I have had an FJ40 for 12 years now and bought it when I was 15. It's pretty stock and will be my daily driver when it stops raining here in Oregon(June-ish). 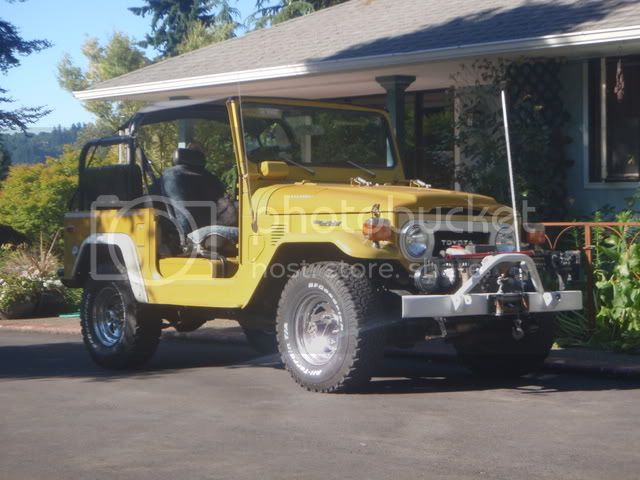 Tonight I drove home my new FJ60. My logic being that 2 cruisers is better than one. And my truck cab(a 97 dodge) is not fun to sleep in when you're tall. The 60 will become my daily driver for most of the year once I get some stuff fixed.

How I found it:

I probably wolda taken a 62, but I really wanted a manual because I love the sound of my 40 transmission. And round headlights are rad.

My other criteria were:
-minimal rust
-under 180,000 miles
-around $4k-ish
-ok interior
-fairly stock

I searched for the past couple of months, but really ramped it up this last month. My friend cruisified was constantly searching craigslist/ ebay etc and forwarding me links. I also began looking multiple times a day with the craigslist search utiluity in Oregon, Washington, Idaho, California, Montana, Utah, and Colorado. All kinda close to Portland.

I saw a lot of interesting 60's and 62's along the way. Probably the most notable was one of the first I inquired on in Bend, Oregon. A white FJ60 with fairly low miles and "some rust". $2600. "Runs great!" I received more pictures and saw a nasty hole wearing through the rear fender. That lead me to believe there was more and a carfax report showed it had been in boston for 15 years. I told him I probably wasn't interested, and he said he would sell it to one of many people "blowing up" his phone. Then he called me several days later to day he would be in Portland with the 60 and could stop by. Guess is didn't sell in Bend. When the vehicle shows up I immediately see rust. And not "some rust" but a bucket of rust. The rear fenders had holes in them and the rear passenger door jam had a fist sized hole leading to the driveway. I crawled underneath and the frame had silver dollar sized chunks of rust that could easily be chipped off. In the back, the frame was disintegrating and the tow hitch bolts were holding together waffles of rusted frame. It was the most aggressive rust I have ever seen. I looked at the guy and said "Do you know how bad this is?" "No, I don't know much about rust" he replied. I told him about cancerous rust and explained that his vehicle was crumbling apart. He was clueless, or shopping for a sucker. I told him good luck and he split. Glad I hadn't driven 3 1/2 hours to see this one.

This jaded me, and I became afraid to look for far away cruisers as the might have "minor rust" according to the owner and then turn out to be ravaged. One after another, I received pictures of rusted out wheel wells and passed on each one. Then I found a rust free cruiser in Bend again with decent milage(177,000). Blue, with a clean interior. "Runs good". They seem to all say that. I spoke with the owner and he seemed to know a lot about the vehicle. I told him what my budget was, and he agreed he would sell it for $4k down from $5500. Then I lined up a mechanic in Bend and he had it dropped off. The report soon came back and it wasn't great. It would need $1k in work to make it over the pass to portland. All the brakes were shot(must have for coming over the mountain) and the wheels were incorrect offset. This was causing wear on the front right tire which could lead to a blowout. And the bearings needed work. He was firm on the $4k and I decided to walk away. I figure I spent $120 to save $1000.

I kept looking with Cruisified and got a call from him on Sunday. "Dude, call this guy right now and go buy it". It was a 1982 FJ60 with 144,000 miles. Excellent interior. "Runs Strong". I called and spoke with the owner. He had listed it 30 minutes earlier and had already received a call but the first caller could not afford the asking price of $2770. I told him I had that in cash and would like to see it soon. He said he would put me in first place to check it out and we agreed to meet the next evening.

Cruisifed and I headed out, quite excited to see if this one would meet up to the listings hype. We drove about 45 minutes to Gresham and came upon a good looking 60. The interior was flawless. Not cracks anywhere in the dash, not crack in the drivers seat spot, and all the carpet/ seats look factory new. It was like a time capsule. Still had the orginal manual, tool kit and all the receipts. The exterior was kinda hammered. No real major dents but some minor rust. We determined it was repairable so it wouldn't be a big issue. Small crease in tailgate and some sap on the hood. After a once over, the owner tossed me the keys and told us to take it for a spin. It drove straight, had good power and stopped well. Cruisified took it for a spin, and told me it felt solid. A little squelch from one of the belts, but otherwise it seemed great. I put $500(refundable) down and took the vehicle to have it checked out....

I dropped off the vehicle Tuesday morning and got a call from Cruisified that afternoon and he told me some bad news. He stopped by the shop to check on the progress. "Dude, they won't give me the report but they say there's over $3k in stuff." I thought he was joking. I soon found out he wasn't. There was indeed over $3k in repairs. After the initial shock, the manager described each item that needed to be worked on. He said a "1" was most important while a "5" could wait.

I spoke with my dad and we agreed we could do lots of the work on our own. Things like the main seal/ oil pan gasket could wait as long as I kept plenty of oil in the engine. The vast, vast majority of the bill was labor. I agreed I could go without AC. And figured I could trade some of my friends to do the really nasty work(rear main seal) for painting/ beer/ etc.

After determining I could do most of the work for around $1000 I figured the vehicle was still in my price range. We called the owner and arranged to come out. We agreed that the price was fair, as the work wouldn't actually be $3k. I felt like I was getting a good deal on a low mileage rig, and he was getting a mortgage payment. I got his emial adress and assured him I would send pics of progress.

Any other tips would be great. I'll try and use the search function as much as possible to find information.

I'll be washing her today and adding some more pictures. Here's what the ad looked like, as well as a cell phone picture. I am so excited to be a 60 owner! 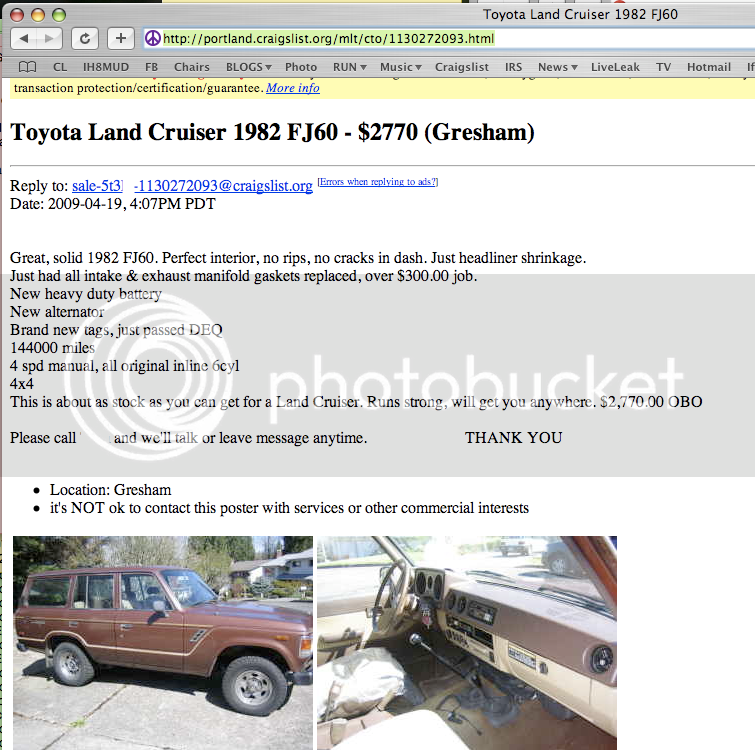 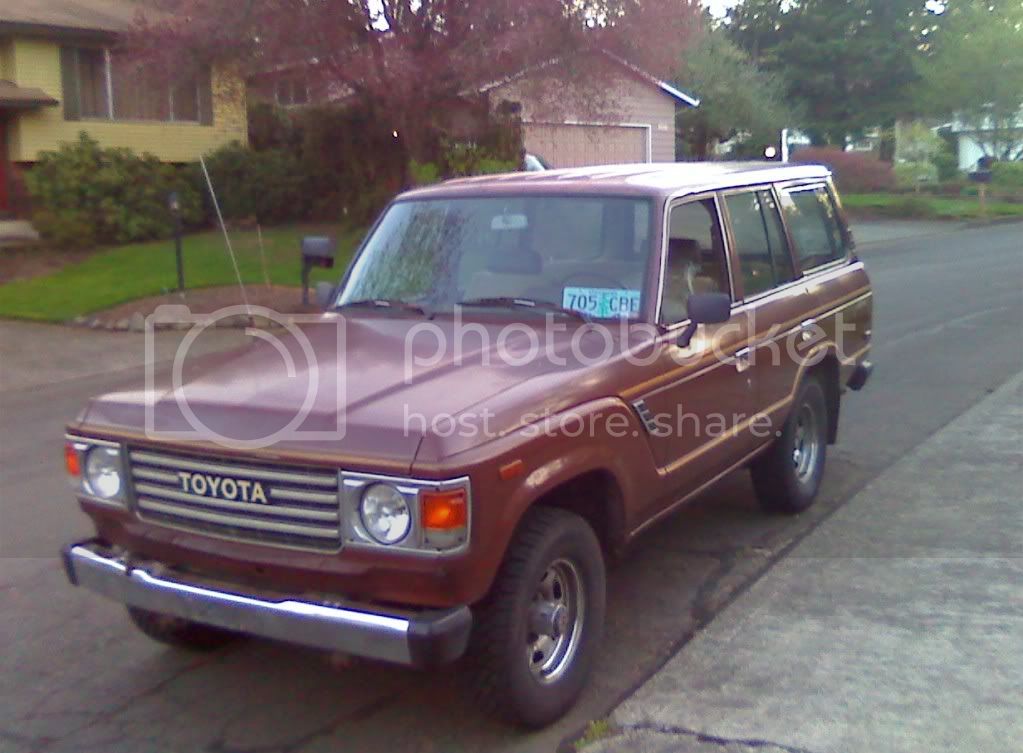 Will you quit screwing around on the internet and order your lift already. Nice 2nd post, duder.

Who's with me in that some gold flake accents would look bomb over the Root Beer brown?

Cruisified said:
Will you quit screwing around on the internet and order your lift already. Nice 2nd post, duder.

Who's with me in that some gold flake accents would look bomb over the Root Beer brown?
Click to expand...


I think maybe a gold leaf TransAm Phoenix for the hood.
[sigpic]6127[/sigpic]

Nice looking rig! There are ALWAYS issues with ANY used vehicle you get. Nothing is as good as someone makes it out to be. I would suggest doing the majority of that work yourself. All of it is fairly easy and you can step-by-step walkthroughs here on this forum. There is no way ANYONE should pay $425 for an oil pan gasket.

Dude! That's exactly what I told him when we went to pick it up.

...we gonna do what they say can't be done

Yea, I think we'll do all the gaskets ourselves. Where should I buy them from? Also need the belts, wiper blades, antifreeze. I was thinking order some from man-a-fre/ spectre and get the wiper blades, oil, antifreeze at Bi-mart.

The gold Transam Phoenix whould be sweet! Or a mural on the hood...here's a concept: 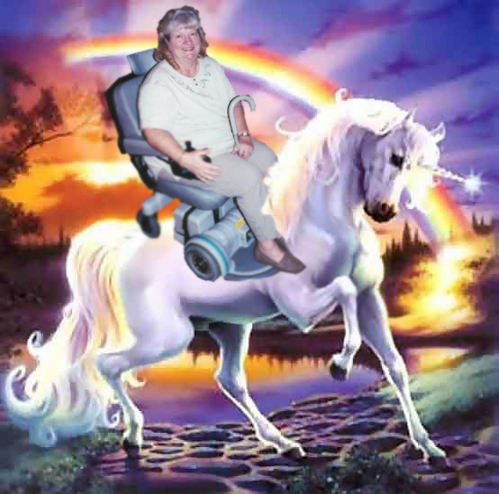 I fuggin love you dude.

welcome to 60 life. and stay away from whatever cruisified is telling you is oregano. it's not.

your cruiser is now named charlie

clint
It's a Jeep thing I didn't understand. So I bought an FJ60 and now I get it.

Yalls need a schoolin in the 502, drugs are bad.

Why Charles? With the mural, think "Rascal" is fitting.

Wait? Do you guys hear that?.... It sounds like an angle grinder?..... And a sawzall. Let's cut it up! Bwaaaaaaaaaaaaaaap!

Cruisified said:
Yalls need a schoolin in the 502, drugs are bad.

Why Charles? With the mural, think "Rascal" is fitting.

Wait? Do you guys hear that?.... It sounds like an angle grinder?..... And a sawzall. Let's cut it up! Bwaaaaaaaaaaaaaaap!


Riiiiiiiight. Whatever you say buddy

I can't possibly out-do the Agnus/Rascal/Unicorn/Rainbow

That is simply the best idea ever
[sigpic]6127[/sigpic]
C

Come out to Beer Town, USA (Portland) I'll pour you a pint of NW IPA and you'll see why I don't have time or the desire for wacky tobacky.

Kiddin about the sawzall, this rig is purdy, no driver side seat tear or dash cracks, super straight body, she's a beut. Good purchase!

Nice find. I can airbrush that unicorn on the hood for you but it might not look like that picture.

"He who throws mud only loses ground."

Ohhh my gawd!!! That viking/ Conan the Barbarian mural is out of sight! Perhaps a couple of dream catchers blowing down the side and I'll be getting all the attention I could ever want.