Truly a TLCA-built truck.
This build would not have happened had it not been for the extremely generous members of a selection of TLCA clubs on the east coast. This build is dedicated to them, for their hard work, generosity and passion for this hobby. There are approximately 2000 man-hours invested in this truck just through what my fellow TLCA members have put in.

In chronological order, by major project.

For those of you who aren't a member of the TLCA, quit stalling and sign up!


Table of Contents in development.... 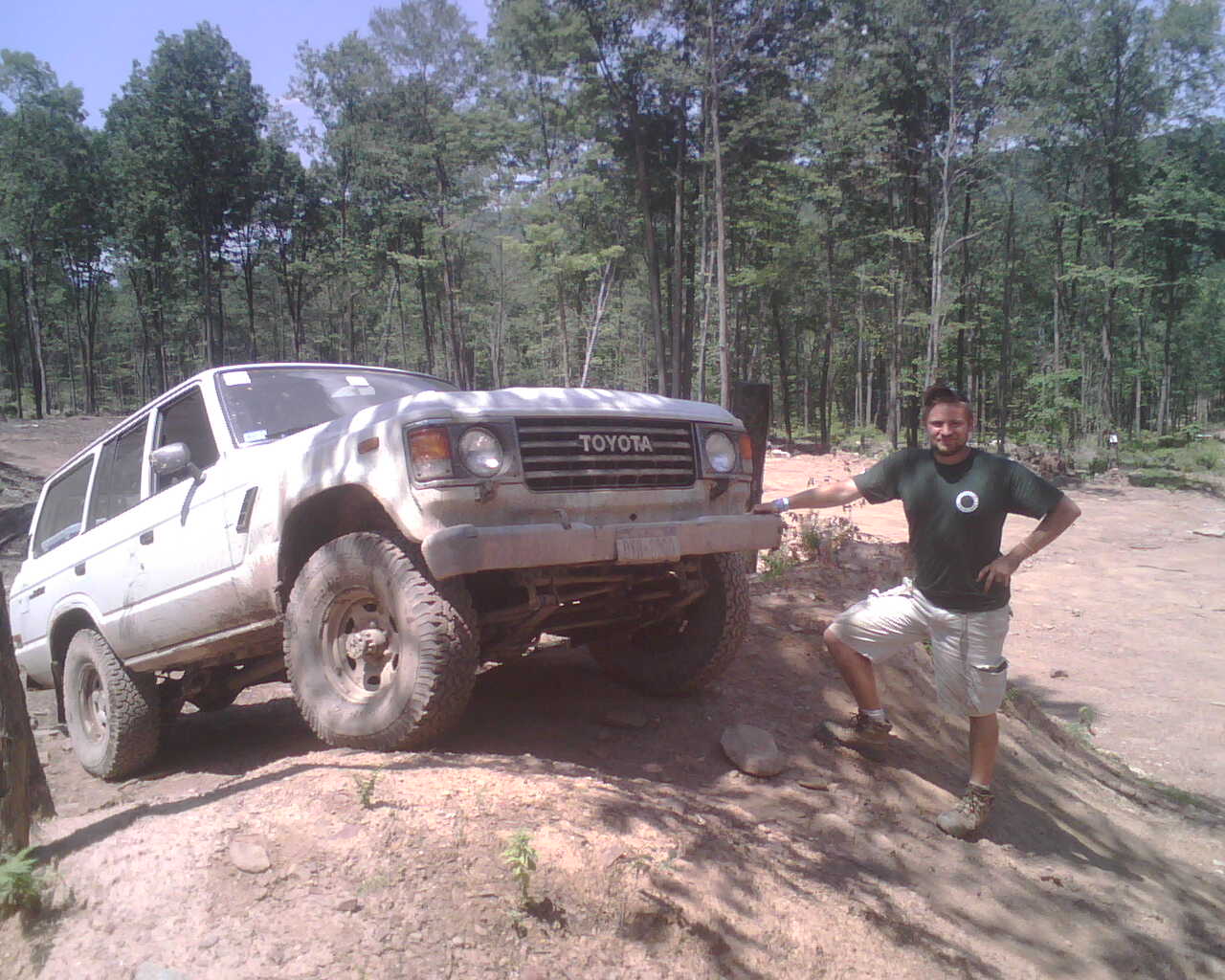 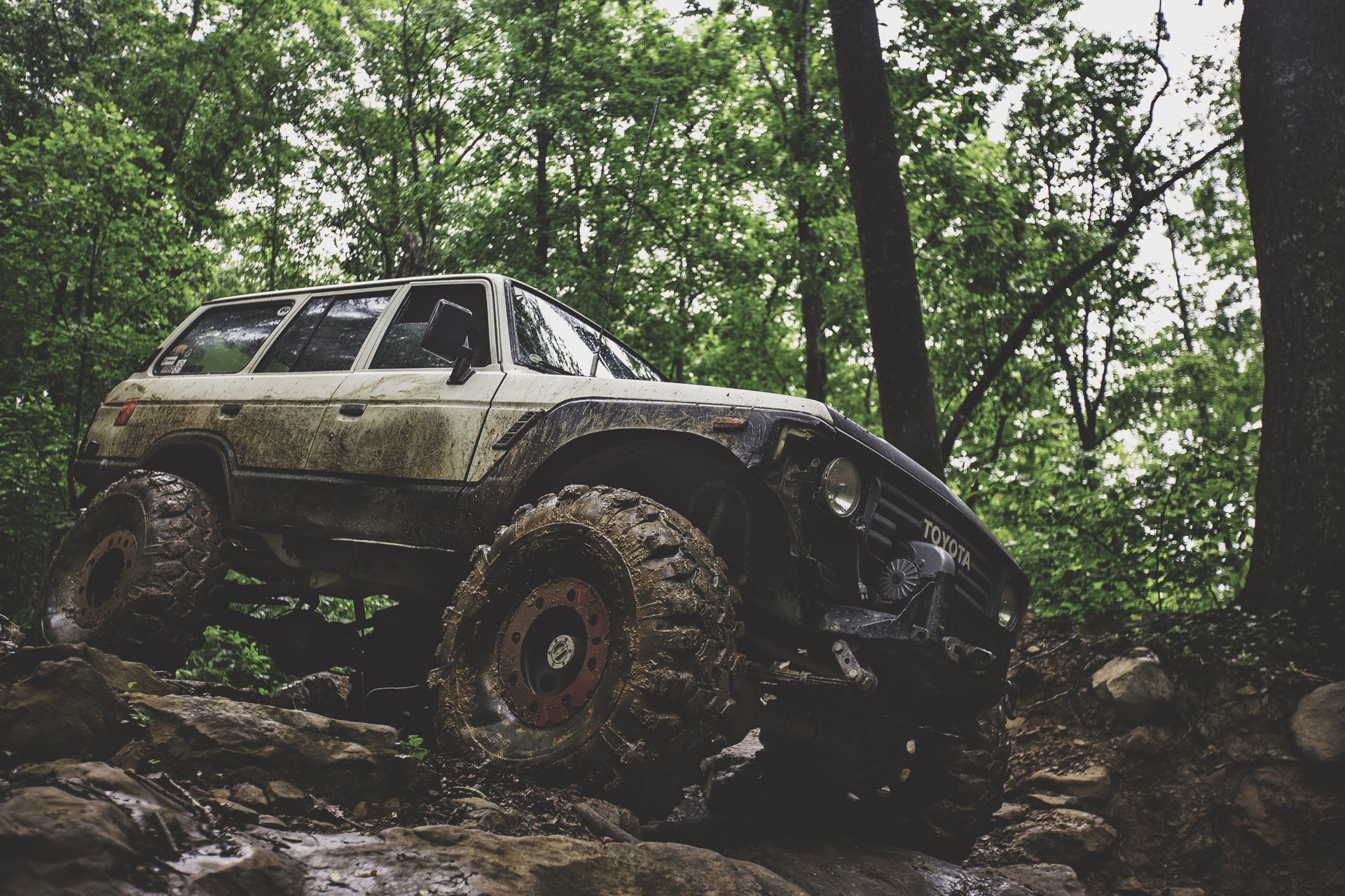 My Land Cruiser story started quite a while ago, back when I was 14 or so. I had been very interested in cars and trucks since I was much younger, appreciating the simplicity of older vehicles over newer, computer controlled models. I remember the first time that I saw my youth group leader's red 1987 FJ60 and saying to myself, "That is the COOLEST truck that I had ever seen!!" I was amazed to see that a SUV had a standard transmission!

As I grew older and learned more about carburetors and four wheel drive, I decided that George's red FJ was going to be mine some day. That day came in the spring of 2005, when the truck had developed what turned out to be a bad case of warped manifolds. George didn't want it anymore, so he gave it to me on the condition that I was to fix it and show it to him when I was done! I was almost as happy that day as the day that I asked out my girlfriend, and we have been going out for 4 years come OCTOBER 2ND!!!

Long story short, that thread is my "write-up" of my experience changing out the manifolds on that rig, and it came out extremely well! I ended up rebuilding the carb and doing some other miscellaneous maintenance on it, and when I brought it back to George, he said that it ran better then than it had in the past 10 years! All of my friends loved the truck, and I had a blast driving it.

The fun with that truck ended when I got into an accident with it. This is the thread about that, so I won't get into it too much, but that was the end of that truck. With the ins. money from that, I bought an '87 BMW 635CSi, but I try not to think about that.

Fast forward through my freshman year of college at the Rochester Institute of Technology, which was last year, which brings me to last summer. I landed a sweet job working as a landscaper making $11 an hour!! That was nice. On top of that, my mother informed me of a check for roughly $2000 that I was going to get from my father and that I should start looking for a car. She started me off with her finance's Dodge Intrepid, to which I said "I pass."

I scoured the Classifieds here on the forum, and happened upon one particular white 60 that had been on here for a few months, and I emailed the seller, Jonathan, about it. He had just moved to Rochester from Boston, and with him he brought two FJ60s. He sold me his white rig because he picked up a UZJ-100 which he drove daily for a while.

Now, about my new rig. I drove out there with my best friend Trevor, who I am getting into Land Cruisers as we speak, and we took this rig for quite a long drive. Jon let Trevor and I drive for hours to really get a feel for the truck. I put some gas in it for him, told him that I was going to buy it, and left. A week or two later when Jon was driving back up to Rochester from MA, he picked me up, brought me up to his house, gave me the keys and drove home.

A short history on the truck: when bought in 1987 in the northeast, the owner drove it to California. There she drove it for 18 years and drove back up here. Soon after that she sold it to Jon, who sold it to me. That is why it has the *limited* amount of rust that it has.

The only problem that has happened so far with the rig is that a belt in my driver's front tire pulled the day after I brought it home, so I called Jon and he gladly paid me for that tire. Thanks again Jon! I bought 3 more and now I have a new set of 33" BFG All-Terrain T/A's. The modifications that Jon did to the truck are FJ62 springs with long AALs in the front and short AALs in the rear, gaining about 2.5 inches of lift. Along with that are greasable pins for the stock shackles and 33 tires. Other than that it is bone stock!! The interior, aside from the drivers seat of course, is perfect, which I love about the truck.

Future plans include new bumpers front and rear, a set of sliders either from 2badfjs or from SROR, which I haven't decided on yet. I am also in the design stage of doing my own drawer system which will be similar to how TheDude did his. Eventually I want to re-gear to 4.11's, throw some 35's on with an SOA on the springs that I have on it now. I also have to rebuild the front axle and SOMEDAY I will throw in a H55f with a 12H-T bolted to it!! I LOVE LAND CRUISERS!!!!!

Before I post pictures, I want to say sincerely thank you to all of those that have helped / dealt with me through my adventures. If it wasn't for guys like Heartworm, Tinker and especially chitown40, I really don't think I would still be into cruisers! Thanks guys! 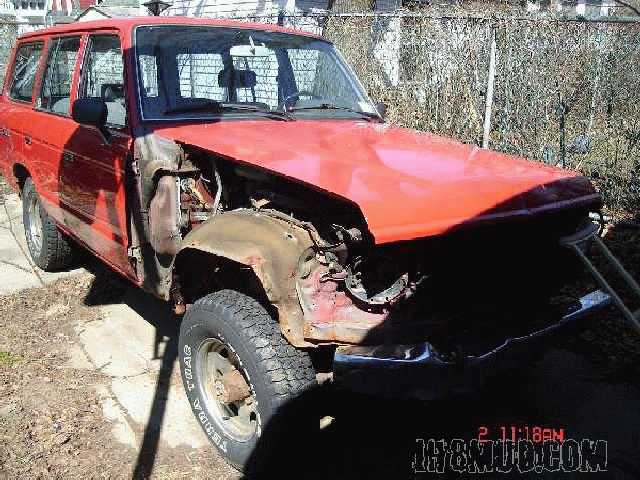 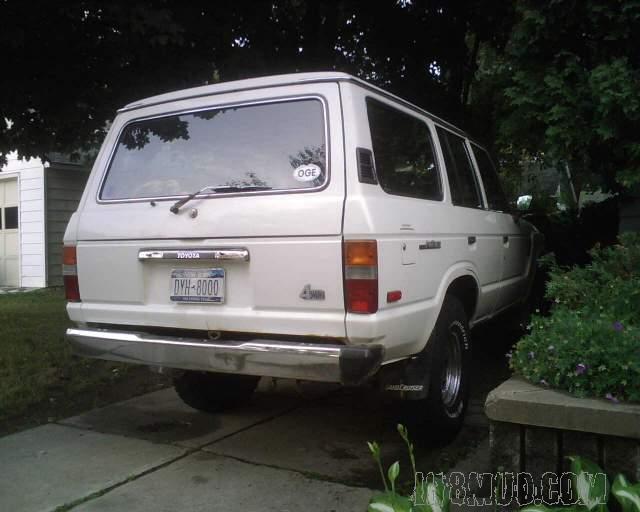 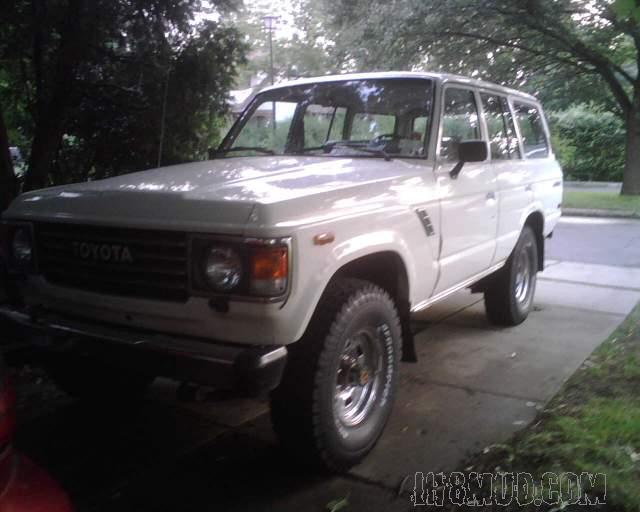 Some more pics. I have more, but I left them on my home computer.... 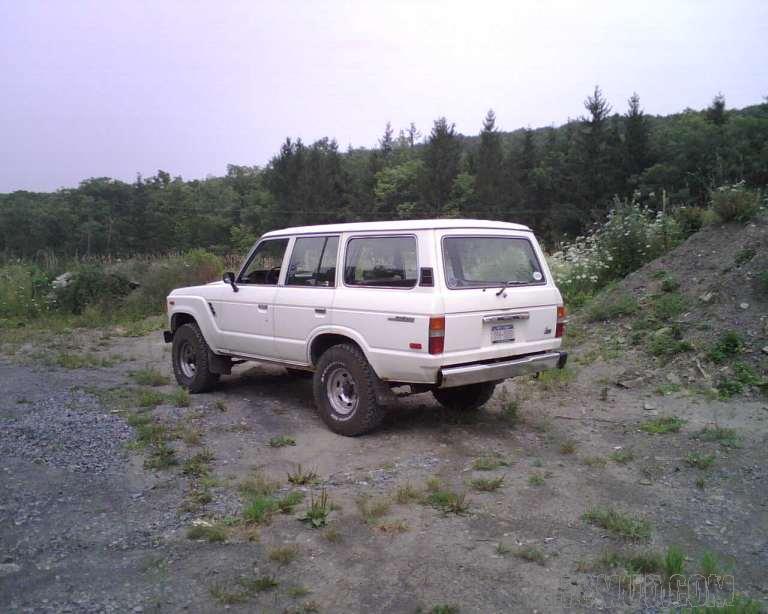 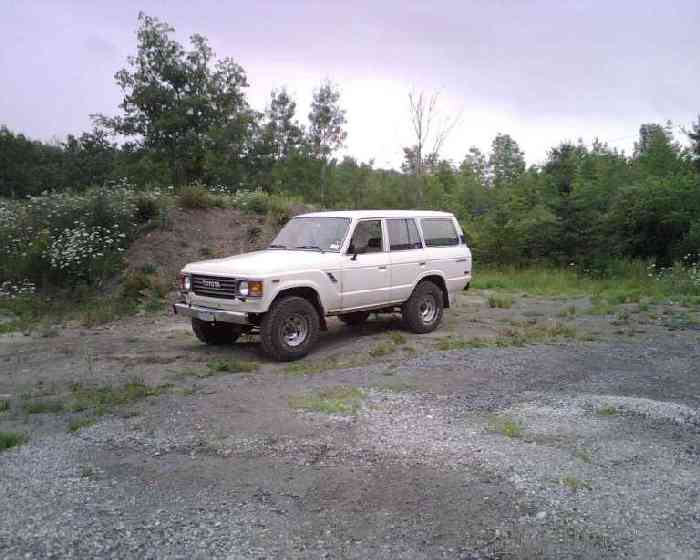 clean lookin rig GLTH! glad to hear you returned to the LC world even after all you've been thru with the accident & college. i wish i had my 60 in college...you know, for the

sweet looking rig. paint looks nice and shiny!! send me your address I have the drivers side rear bumper end you can have.

cliNt
It's a Jeep thing I didn't understand. So I bought an FJ60 and now I get it.

Nice story. Thanks for sharing. Glad to see you back on the board with a cruiser. Thats a sweet 60. White just like mine..
Last edited: Sep 30, 2007

"He who throws mud only loses ground."

Location
the valley, yeah that one

philos1 said:
nice one! looks nice and clean. BTW Jim B (2badfjs) is SROR, so that choice is already made for ya!
cheers!
Click to expand...

I caught that too... not sure if he was serious or not.

BTW awesome lookin rig... looks nice and clean, you have any interior pics?

I caught that too... not sure if he was serious or not.

BTW awesome lookin rig... looks nice and clean, you have any interior pics?


Whoops! Guess that I have already decided who I want sliders from!

I love your "new" white 60...I was bummed when you had to loose the first cruiser. Glad you are back into the club. 4 yrs w/the same girl, at your age, sounds like you are made for each other - that's even more important than a cruiser...

Thanks for all the compliments guys! I get compliments about it all the time at school, but when I tell them how many miles are on it, they gawk and ask why I bought it. Little do they know that it has so much life left!

A few updated pics from last summer that Cruisified asked for. As you all can imagine, the Northeast salt has done a number since then. 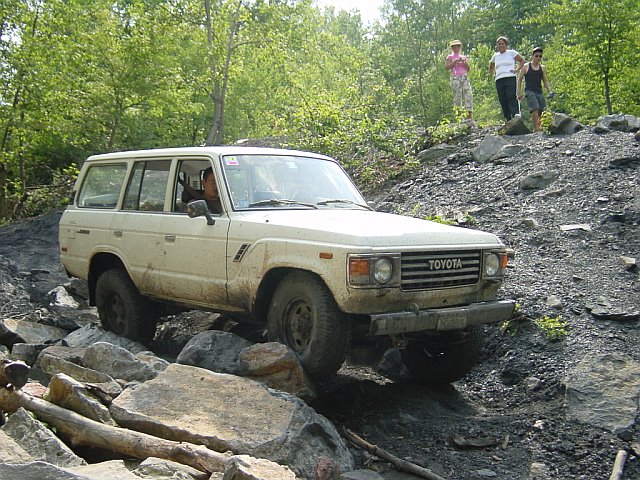 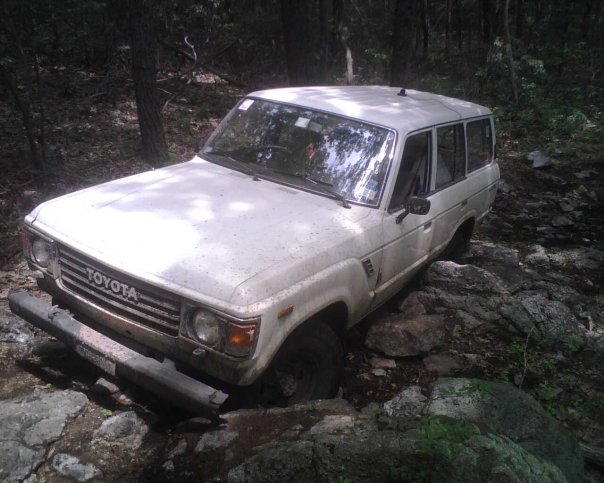 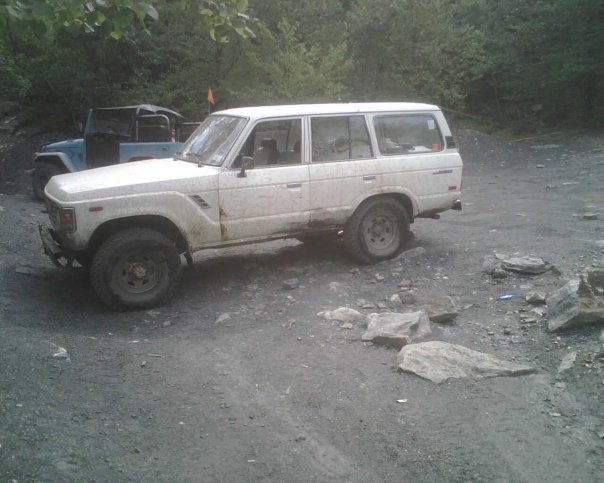 any ideas to protect the body from the northeast salt? bedliner spray, rustoleum?
Drive it like you stole it...