Glad to hear the good news! All the best from Norway! Cheers

Well, it seems really weird, but with all the work I have lined up, it’s business as usual for me to stay put. I’ve had one walk in this week, which isn’t unusual either.

Im moving into the final phase of the renovation in the shop now, and one of the ones I’ve been dreading. The snake pit of choke cables and PCV hoses has nothing on this.

Back in 1991 or ‘92, when I had very few shelves in the shop, I happened to luck on some ratty old shelves, not even shelves really, that were being put out at the curb on Burbank near my dad’s warehouse. The proprietor was an old codger that made, inventoried and sold aircraft parts. His business like most in the area, tanked with the closure of Lockheed, and while he said he was just modernizing, when he told me what he did, that was enough.

At any rate, these shelves were just a cobbled together stack of produce crates,lined, stacked, backed and sandwiched between two pieces of particle board. Nothing to look at, flimsy as hell. But FREE!! I asked my dad, who had a pickup truck with a liftgate to help me get them to the shop.

My dear friend Marty Weatherwax, who I wrote a story about in chat, cut me a whole bunch of plywood wedges to double up the spaces, and I called it good.

Well something happened along the way. I don’t think it was the Northridge quake. Maybe I thoughlessly leaned a ladder against it. At any rate, the whole thing leaned, and a bunch of bin boxes dumped out. Tiny little bolts from the timing cover, oil pan bolts, cylinder head loose valves fell into a pile of yet-to-be-organized motor mounts and harmonic balancers. And I had no resolve to clean it up. Months became years, and years became decades.

It literally took me over six hours to sort out the mess in anticipation of removing the ‘shelving’ to be replaced by a heavy duty shelving cart that had been in the shop previously but was moved out four or five years ago. 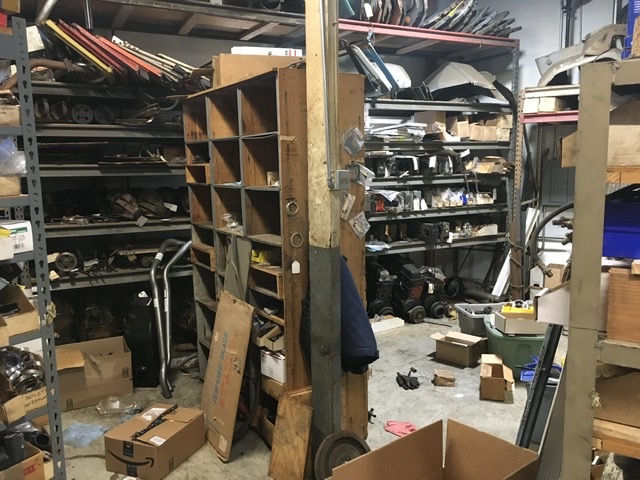 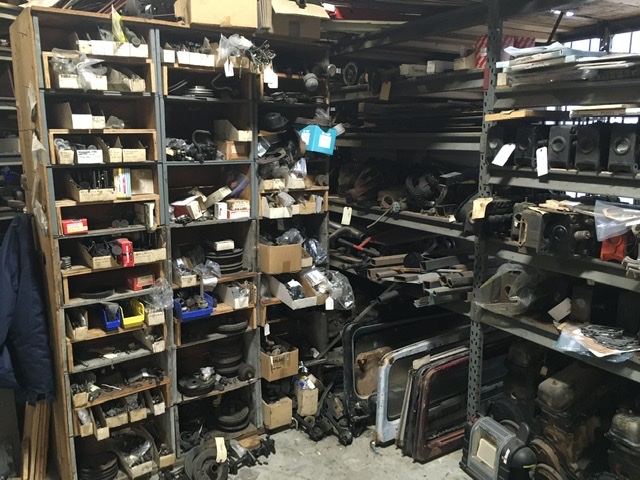 The snake pit WAS at the bottom of the second photo.

But now you can SEE everything! Great lighting!

Did you mean the floor? @Spike Strip
It's nice to see the shop Mark. If I was closer I could give you a hand I will be off for 3 weeks after today.
Last edited: Mar 20, 2020

Spike Strip said:
But now you can SEE everything! Great lighting!
Click to expand...

evening mark, just curious, how's little olivia doing? got off the phone with my granddaughter a couple of minutes ago. she was talking about her friend named olivia n that's what twigged the question

kirvesmies said:
evening mark, just curious, how's little olivia doing? got off the phone with my granddaughter a couple of minutes ago. she was talking about her friend named olivia n that's what twigged the question
Click to expand...

Id like to know myself. I've dropped a couple of hints, but haven't got anything really since Monday. It's understandable. May life is the rock of Gibraltar compared to what the kids are going through. Hopefully I will hear something soon. 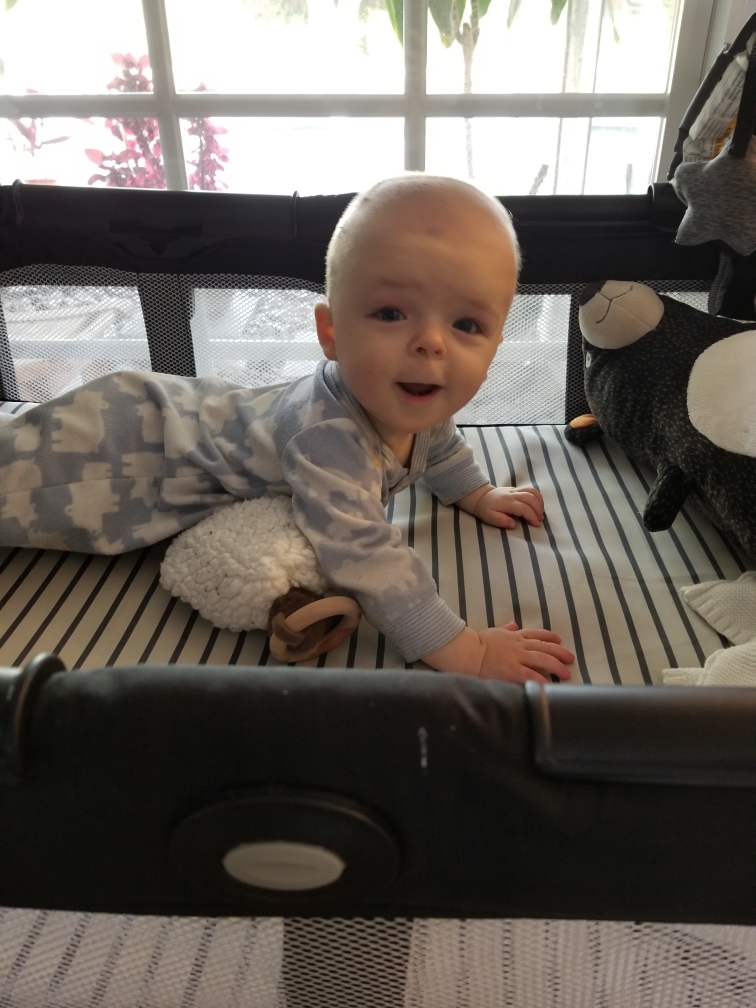 It may not be a cure for coronavirus, but it’s a sure-fire anti-depressant!
K

love the look of life on her face

As a parent of a 2 1/2 year old I truly understand the pain you and your family must be feeling. Your granddaughter is simply beautiful, I wish her nothing but the best for a quick recovery.

She seems to be well on her way to a full recovery. My daughter says she is back to doing everything she did before, as if nothing happened. That is exactly what we hoped for.

As karma would have it, I have been reorganizing the shop for a couple of months now, so I’ve got plenty of ‘alone’ work to be doing on top of all the rebuild and sales. Never thought of myself as an ‘essential’ business, but I’m glad the government thinks so.

I finally got the crate shelf unit emptied last night and started the demolition...except in about 60 seconds I discovered it was going to be more like an archeological dig! 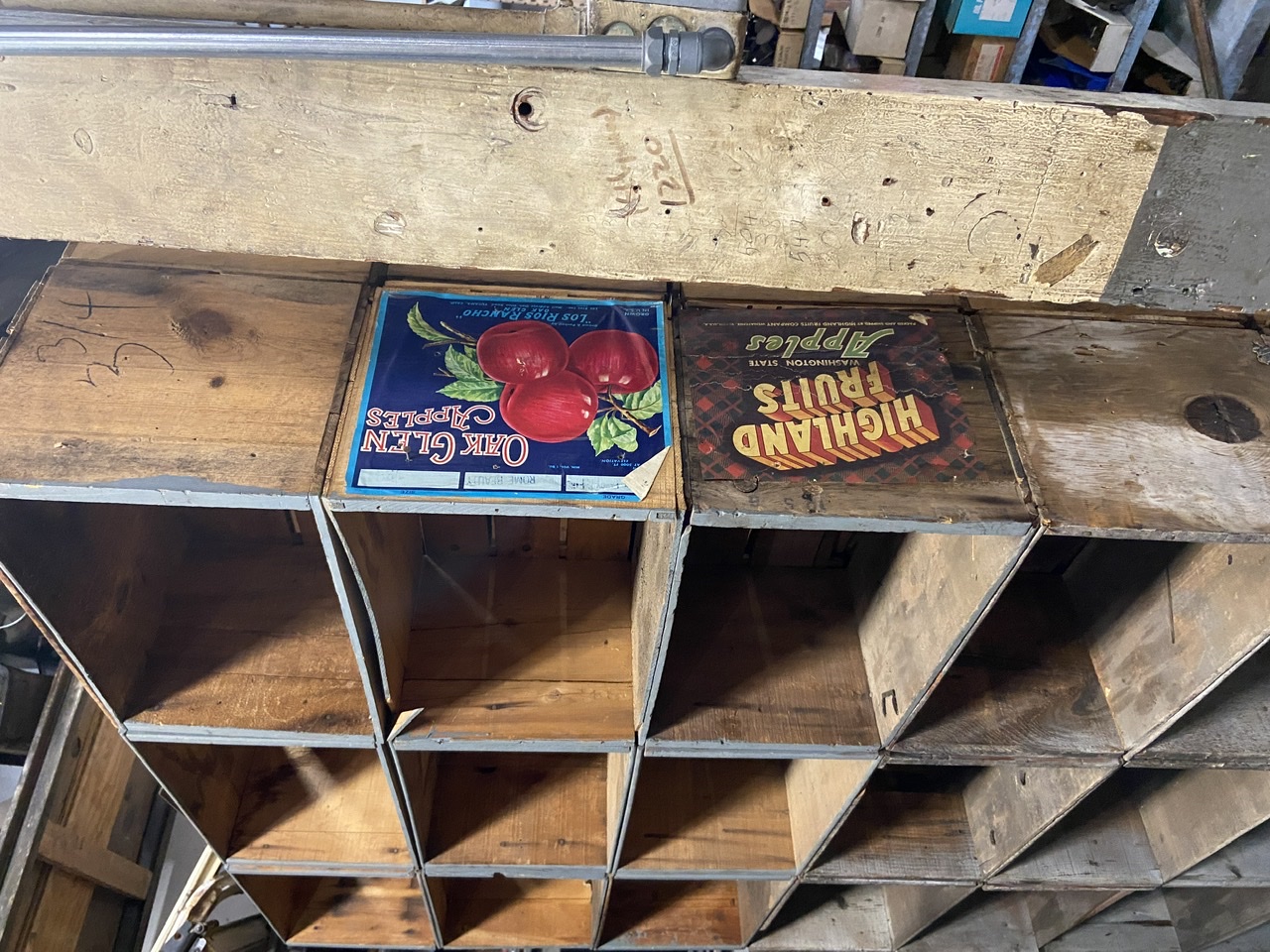 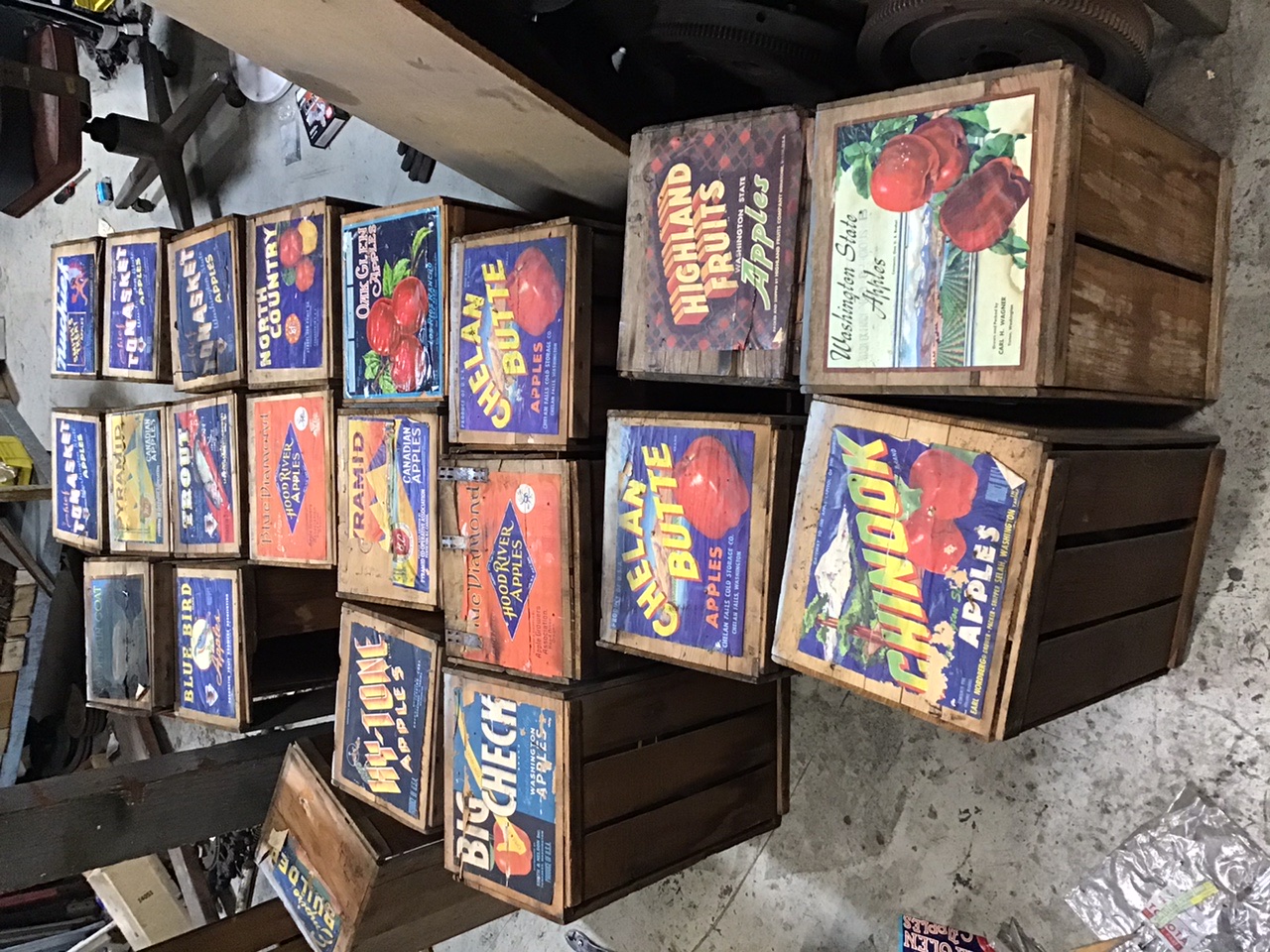 65swb45 said:
Well this collateral damage sh*t just got real for us.

My daughter doubled over with abdominal pain Wednesday and my SIL took her to the ER. We were all suspecting stones, which run in the family. They ran an ultrasound which confirmed them, but also found an ovarian cyst. They made a referral to her OBGYN and sent her home with some HD pain meds.

, so she had to go back in and have another round done today. Doctor confirmed the cyst is over 2” and they need to operate, but they’re afraid to put her in the OR because of the virus. So, they just sent her home again...with 30 days of pain meds and a

Sorry to about your daughter Mark. At least she has pain meds to get her through this crazy time. I think she's safer dealing with the pain than going to any hospital now. With the meds and family, I'm sure she will get through this trying time and things will work out in the long term. Wishing your daughter a quick recovery to her pain. Hang in there Mark, and stay positive.

Praying for your daughter and for the whole family.

crappy situation to have to manage in these difficult times. Luckily she knows what the problem and pain is caused by, and hopefully the Dr.s are able to reassure her she is fine and not in immediate danger while she waits for safer times to manage it. now its just a matter of managing the pain till Hospitals are in a better position to handle non-emergent treatments. You don't wanna be in a hospital right now anyway.

Encourage her to really be cautious with any Opiate or Narcotic pain management. Covid may be an immediate threat, but Narcotic dependance is a lifetime threat and very real, and very easy to find yourself a part of in her situation.

Does she have a med-marijuana prescription? Or just access? it might be a safer option in this case.

Sucky, but shell get through it. and she has that beautiful lil smile to distract her

fjl40 said:
Sorry to about your daughter Mark. At least she has pain meds to get her through this crazy time. I think she's safer dealing with the pain than going to any hospital now. With the meds and family, I'm sure she will get through this trying time and things will work out in the long term. Wishing your daughter a quick recovery to her pain. Hang in there Mark, and stay positive.
Click to expand...

Thanks for the kind words John. Well it turned out that Tina took on the role of the inquisitor and Becky was forthcoming. She already filled out all the admission forms, and has her OBGYNs cellphone, which is on 24hrs. At the first sign of increased trouble, she is to call the doctor, and they will meet at the hospital. And Becky is ok with this.

Even without going to work (which is working at home) she’s got her hands full. Our silver lining in all this is that Olivia seems to not only have completely bounced back from surgery, but is moving forward, literally. On Thursday she figured out how to crawl, and the kids went into a mad rush figuring out how to childproof the house! I got a chuckle out of that! 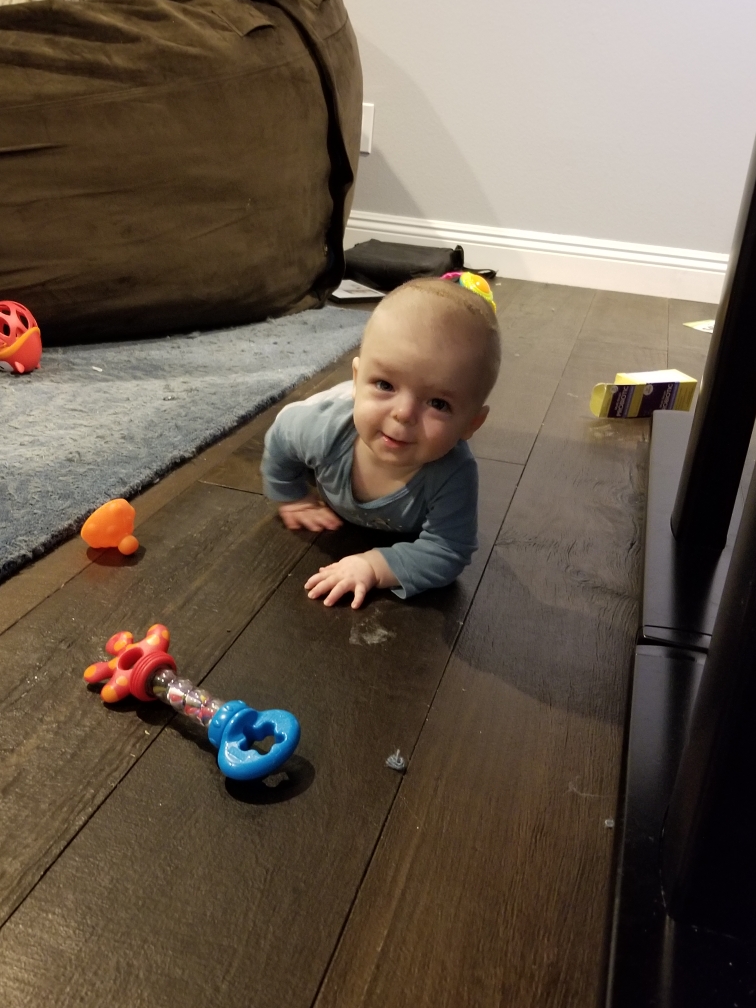 What a cute and uplifting picture!! You are right, there is your silver lining. I talked to Robin, and she also had the same condition as Becky, and although it can be painful, it is something that is manageable. Now that Olivia is a crawler, it will give Becky something else to focus on, baby-proofing! Wishing you guys the best, things will work out. Keep up the smiles!
You must log in or register to reply here.
Share:
Facebook Twitter Reddit Pinterest Tumblr WhatsApp Email Link