Builds Just had to treat myself for Halloween... 65 SWB

Well, after 18 years of owning Cruisers I've finally brought home my first 45. It's a 65 SWB removable top I found about 30 miles from home. I'm pretty certain I may have paid more than market value but I have to be honest with you...


I'm not losing any sleep over it!

It's 95% original (paint included, i believe) and a pretty solid start. I plan on having this for a long time (have had my current 40 for 14 years) and I'm stoked to have found what I'm looking for so close to home... 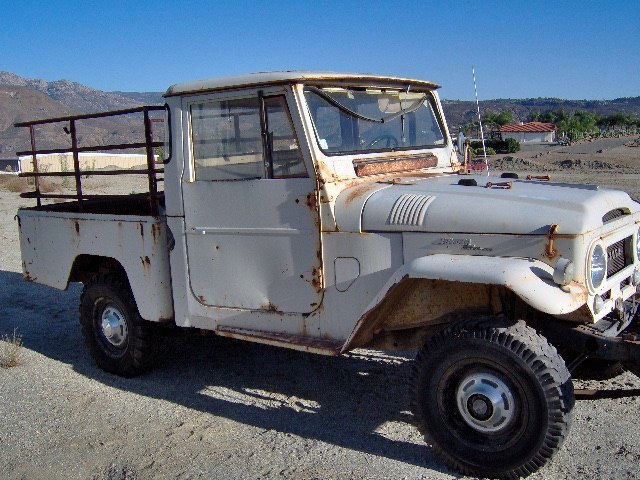 Now my 40 has a new friend and garage roommate... 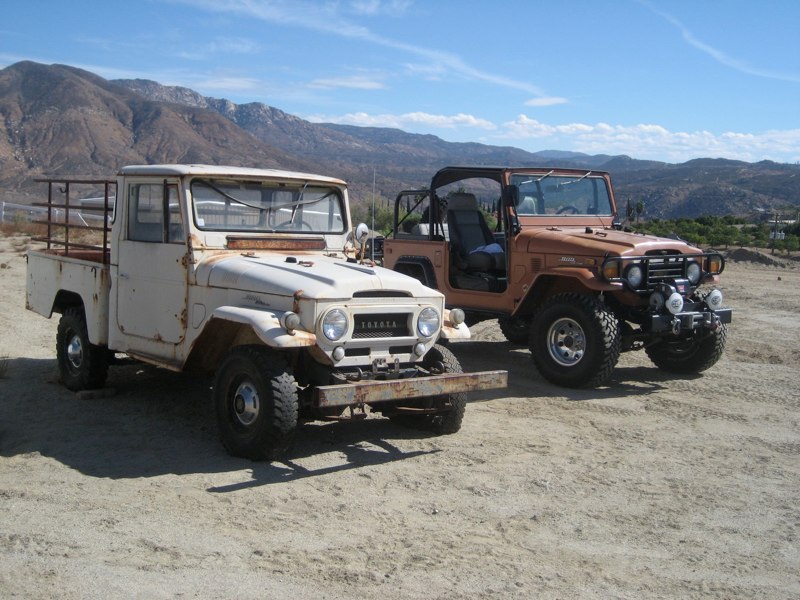 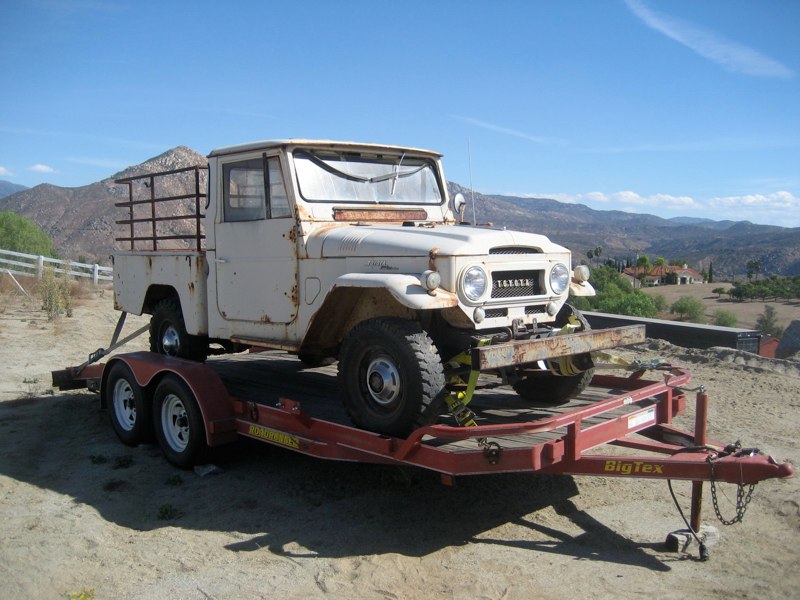 PO was kind enough to trailer her home for me!... 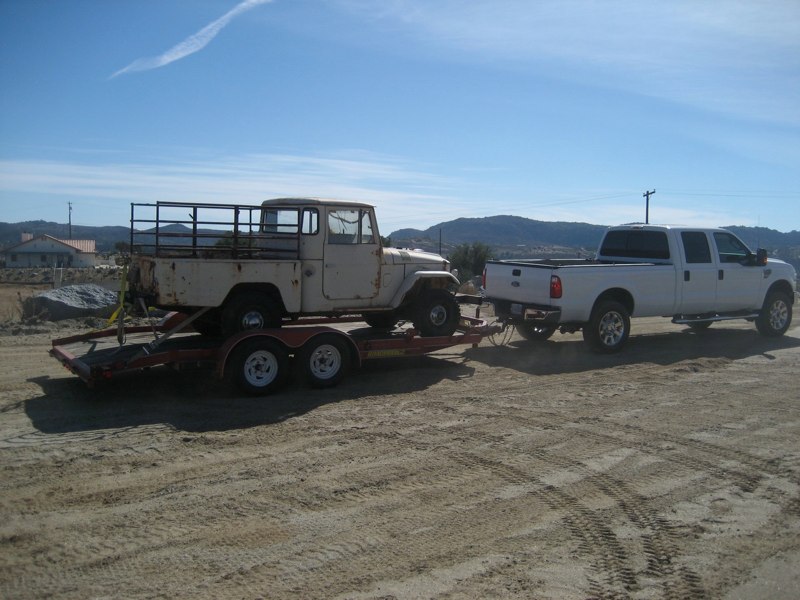 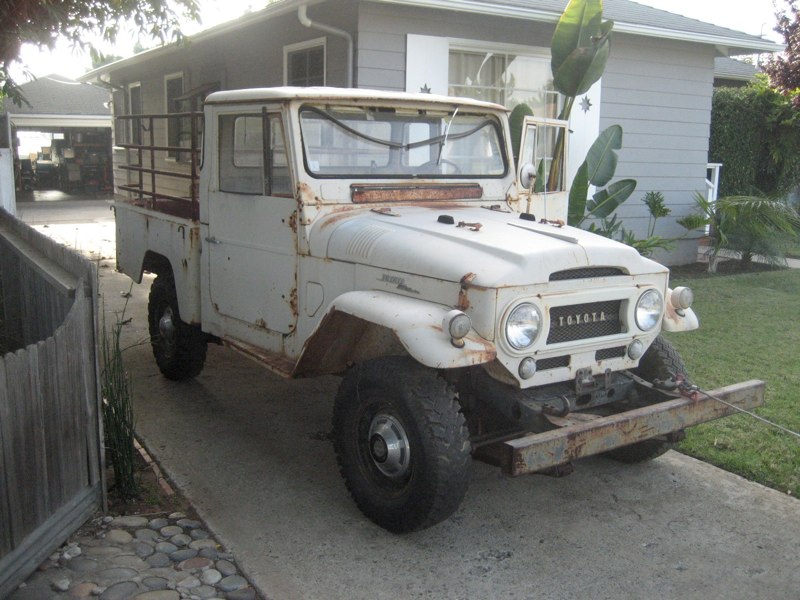 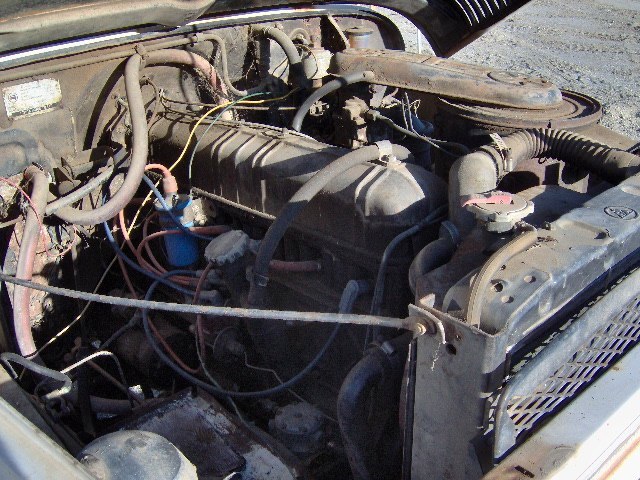 Bed is covered in surface rust but no serious cancer to speak of except the rear sill... 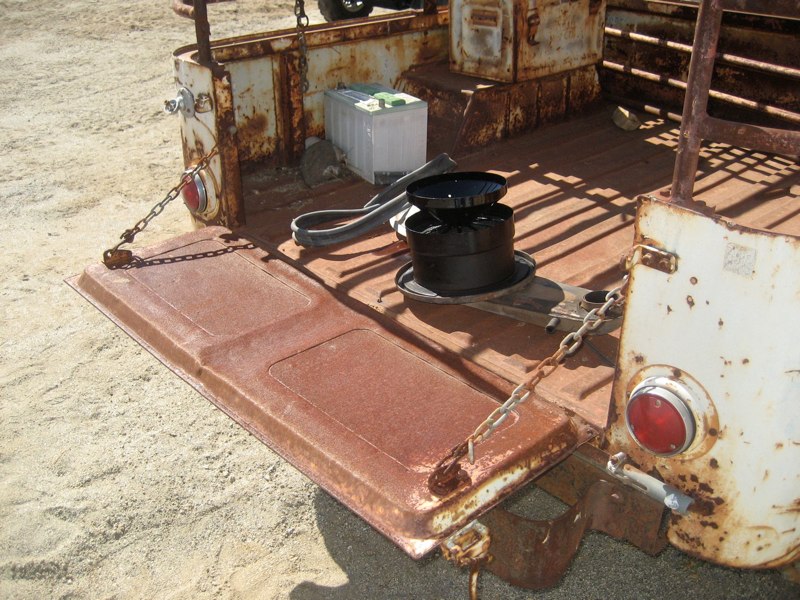 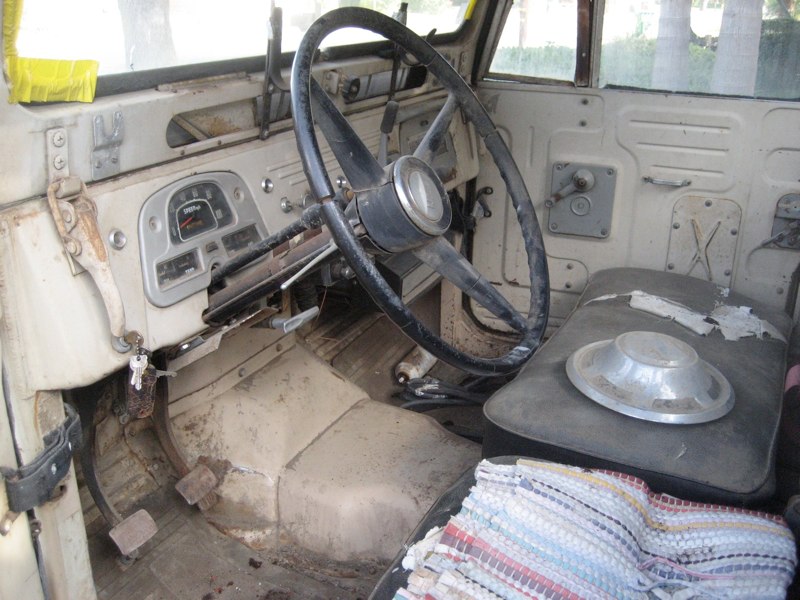 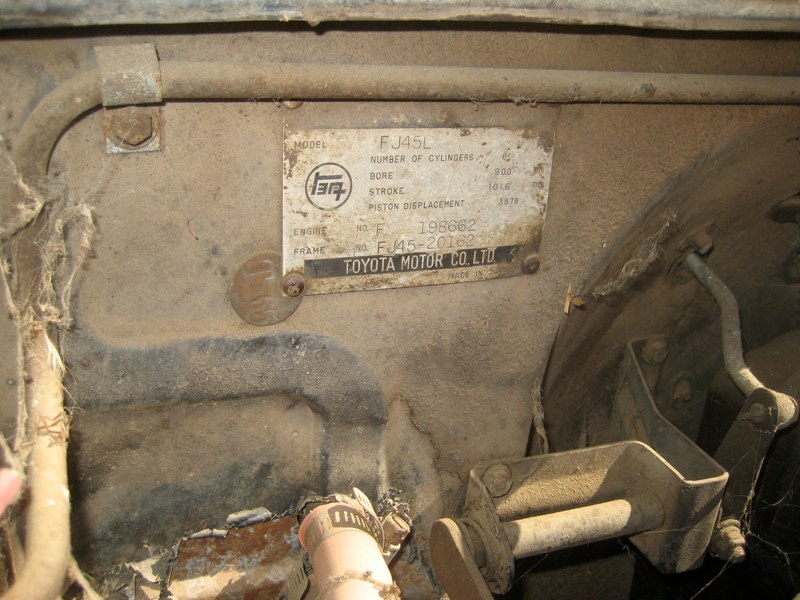 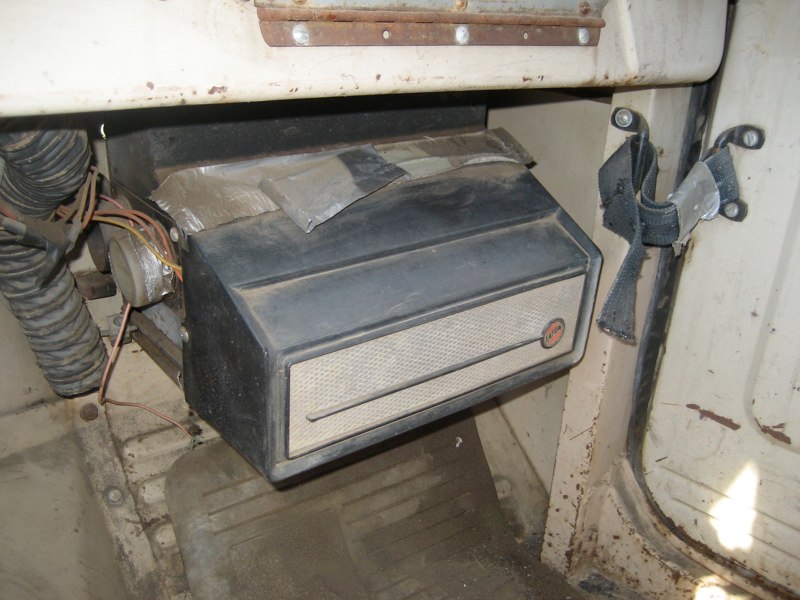 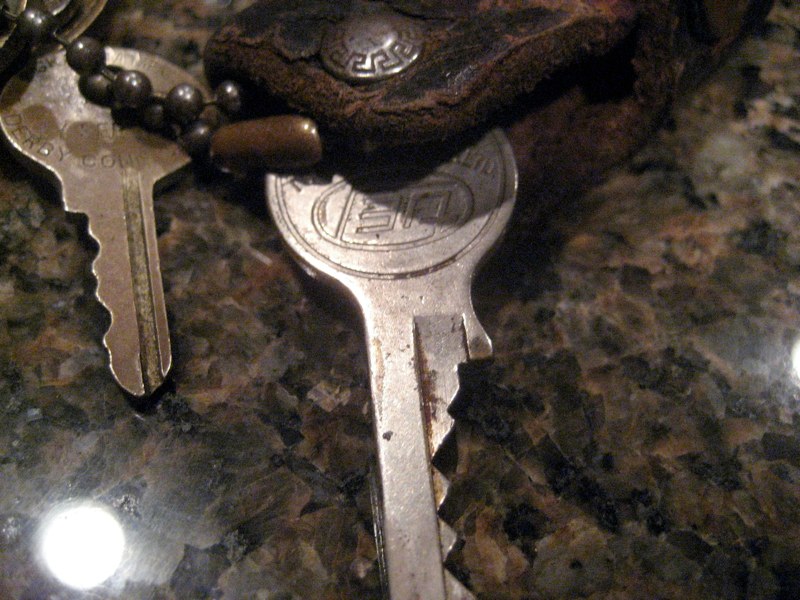 No Brain, No Headache!

Location
Behind the Orange Curtain, CA

I need to get those shackles to you, I have them in my locker at work.
Tony

Glad to see someone here got that rig. You only paid to much if you are not happy with it. Great project for the next 18+ years.

I would love to have one of those.

Thanks guys. As you can imagine I'm super stoked and yes kellyo that's why I just went for it. Have no regrets.

Tony I would like to get those sometime soon. I'll give you a call.

I really have no history yet on the cruiser although I will be talking to the PO soon. I also have the owner before that's name so maybe I'll fish a little there too. I know the guy that had it before me bought it in 98 and it has been stored since then. Resto project that never got cleared for takeoff.

I'll have a million questions I am sure but I'll try to research instead of hashing up every answered question. But here are a couple:

1. The engine is covered in decades of dust and dirt. What's the best way to clean it without destroying any decals or scratching the hell out of everything with rags? Maybe soak it with___________ and rinse? Any suggestions are appreciated. Just looking to make it a little more serviceable not pristine.


2. I'm also curious about this ID on the side of the rig. Anyone have a clue? Government truck? 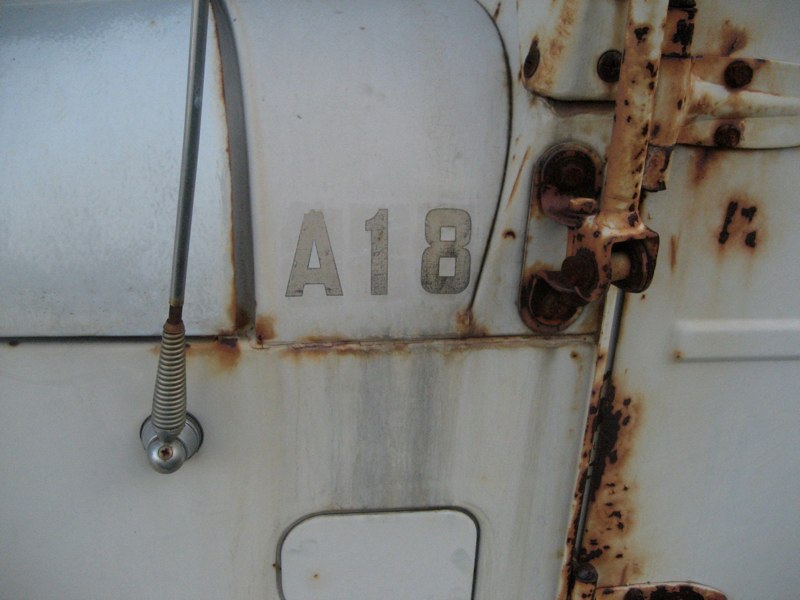 I'm going to change the oil and drain the fuel, replace the fuel pump/hoses/filter and get her started up today!

Also looking for a temporary tire to use until I figure out what size/style I want to get. The 4th tire and the spare leak and are flat by morning. Back in the day I stored many many tires for just this occasion but eventually just got rid of them. Ha Ha.

EDIT: Tire is just for pushing around and in and out of the garage. NONE of these tires look good enough to be on the road without blowing out.

I can now envision how your tidy back yard is going to look once you tare into that thing.

I'll stop by to check it out.

So give me a call once it's time to lift the body off the frame.
CA - San Diego Cruisers

Searched for pics but it looks different from any I've seen. Maybe because most are updating when doing a restore/redo? 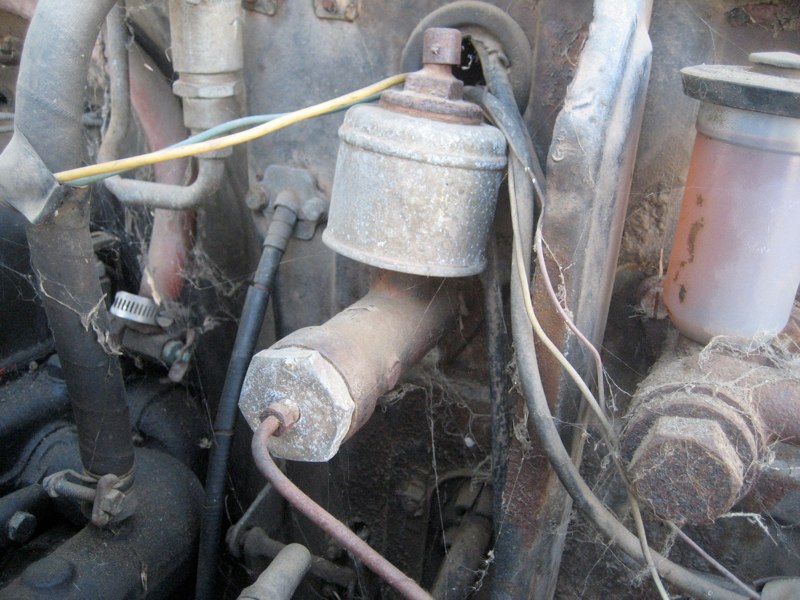 Thought for sure it was aftermarket, but... 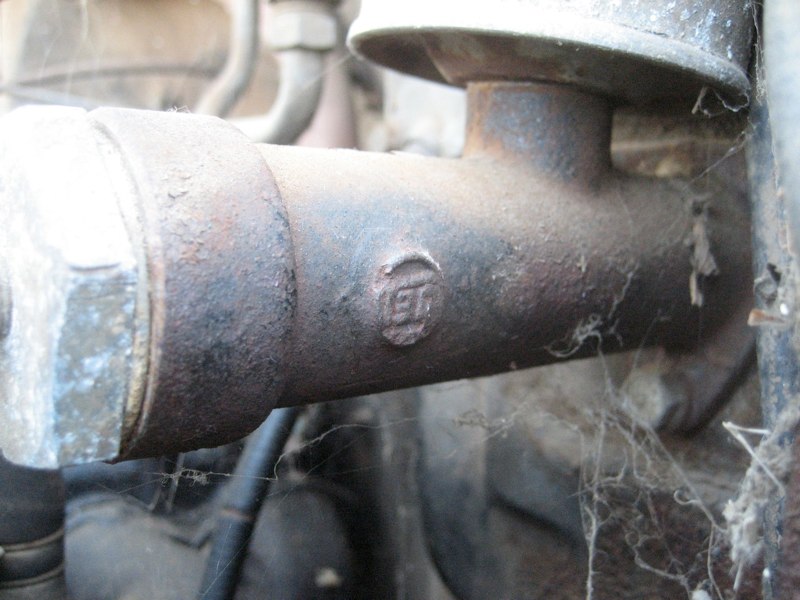 They were used on the early trucks it is factory----but most people upgrade as they tend to pee with age. m
ECO-OFFROAD LLC
Building vehicles and dreams since 2008!
Follow us on Instagram: #eco__offroad
Vehicle Restoration & Diesel Conversion; Vehicle Importation (Importer of Dreams!)
--From South Africa, Australia, New Zealand, Japan, Brazil, and Parts of Europe!
Email will get the quickest response. [sigpic]21356[/sigpic]

Very nice truck - well done, its only money! Your 40 is looking really sharp too.

This isn't a f”ing hobby. This is the lens through which I see my entire world. Driving and living Land Cruisers is in fact life. It is vitality in the bulls*** world that everyone else wants us to buy into. Land Cruisers are the way the world should be. We are just the lucky ones to realize it. -Beno


What a great looking truck.

Allowed to run wild, neglected, or cultivated .... A man's mind brings forth...

If no useful seeds are put into it , an abundance of useless weed seeds will fall into it

, and will continue to produce their worthless kind ... James Allen

Thanks Bikerso. Pedal goes to the floor and it's bone dry. Surprise surprise. I was really afraid of trying to unscrew it for fear of breakage but it came right off... 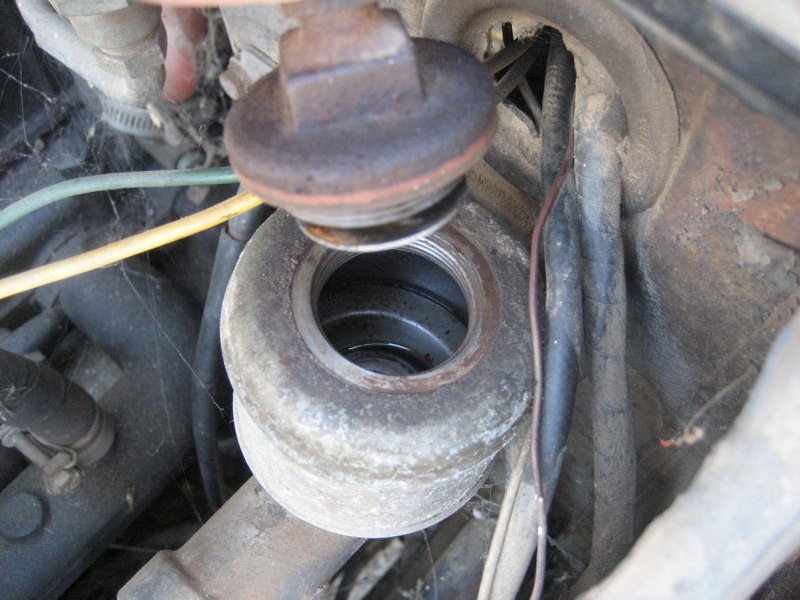 I filled it up so we'll see what it looks like in the morning. I need to get a second person here so I can bleed the system. Which brake master are most upgrading too? (I know, I know... search!)

I also removed the oil filter (canister type) and cleaned it all up. The seals look to be in really good shape but now that it's back together it's leaking out of the bottom. 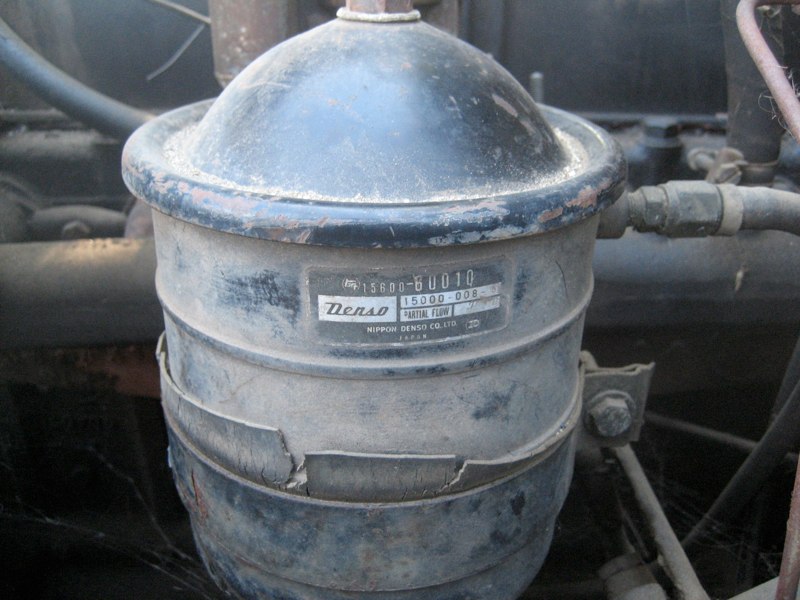 Filled up the radiator with some coolant to look for leaks and there is some dripping from the water pump area while it's just sitting. I'm going to try to take a closer look to see what exactly is leaking, but I have to admit it's been more than a decade since I worked on an F motor... so I suppose a pump and gasket is in order as well. I'm thinking of just driving to SOR monday to get a few things but we'll see. 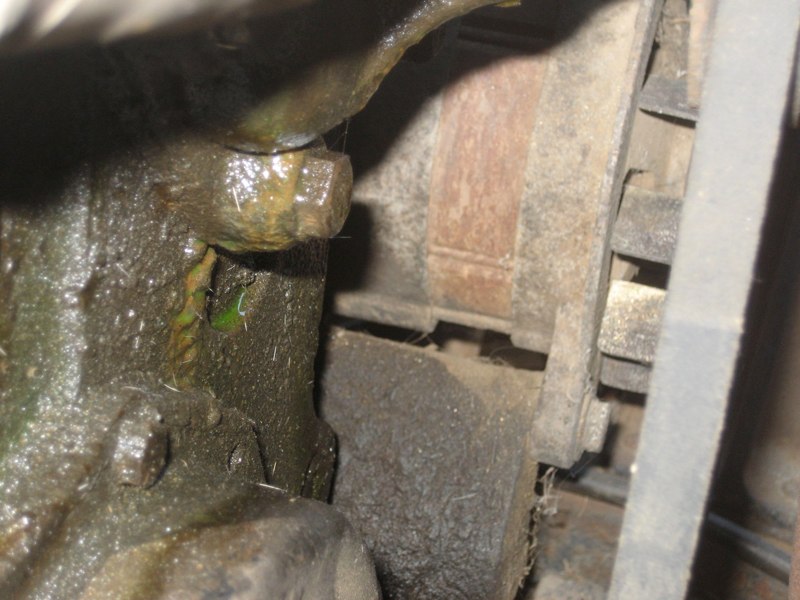 Drained the fuel after 10+ years and it had a strong odor like turpentine. A good 4 gallons in there so I hope that helped with any rust issues. No serious crud at all.

I also removed the fuel filter and cleaned it all up. Local dealer said it's no longer available but I have to say they are not very helpful. I'll probably check with CDan soon... 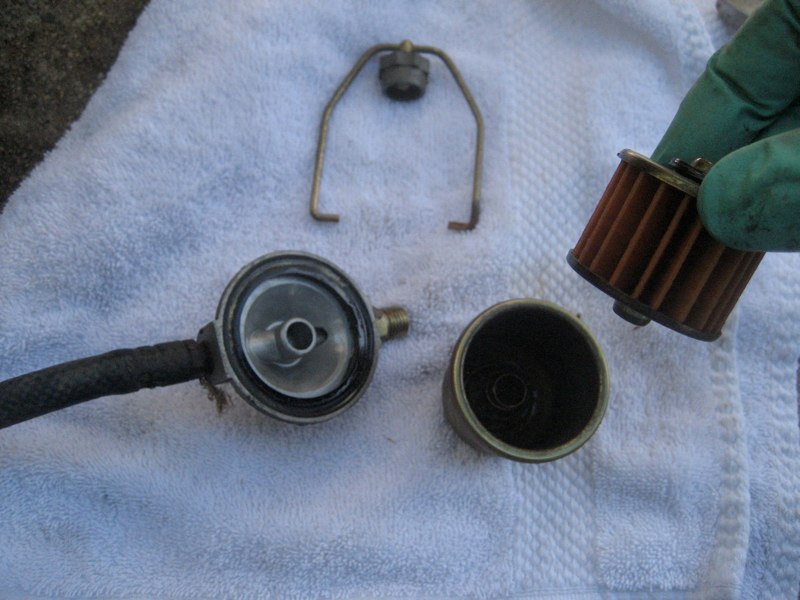 Changed the fuel lines and after a few hours of airing out I put about 2 gallons back in.

I removed the fuel pump as it didn't seem to be working. The rig will fire up immediately if you pour gas in the carb but stalls after it's gone. I have a spare pump in the parts bin from many moons ago but after taking this one off I could see the spring had popped off and was jammed in the pump. I pulled it out and reset it and bolted it back on. The PO thought that was the problem too so I was hopeful. Turned the rig over with the fuel line disconnected and it pumps like a charm. After hooking it all back up it still won't run on it's own however. I cracked the line at the carb inlet and it poured out. I think the pump is good, so on to the carb which I am totally clueless about. It's another Carter YF so I suppose I could rebuild it? Or maybe try to get a hold of an Aisin? 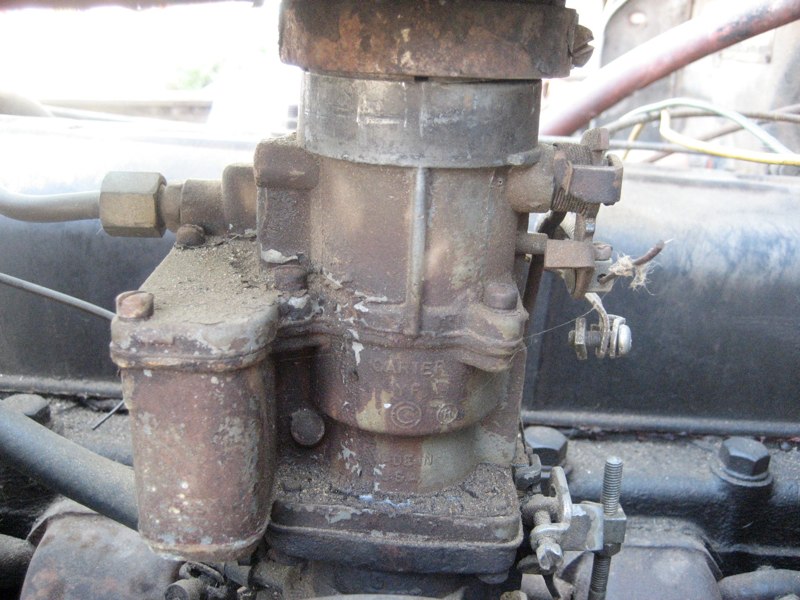 More small problems than I anticipated but not very surprising considering how long it's been sitting. But a hell of a lot of fun I might add!

Check the FJ25 part number thread for the fuel filter part number. Its still available. Send the master cylinder to Whitepost restoration for them to work their magic on em. That clutch master isnt original. Find one and sent that for a restoration also.

Also, every Toyota canister oil filter cartridge comes with all new gaskets for the canister. That should fix your leaks. There is also a drain plug on the bottom of the canister itself that may need to be tightened or needs some thread tape to seal it.

Got some close ups of the front and back of those front turn signals?

DomSmith said:
Also looking for a temporary tire to use until I figure out what size/style I want to get. The 4th tire and the spare leak and are flat by morning. Back in the day I stored many many tires for just this occasion but eventually just got rid of them. Ha Ha.

EDIT: Tire is just for pushing around and in and out of the garage. NONE of these tires look good enough to be on the road without blowing out.

For the brake master cylinder I would strongly recommend a dual master cylinder---I now its not original---but better to be able to stop your truck than wreck an original. Check with Mark from Mark's Offroad.
ECO-OFFROAD LLC
Building vehicles and dreams since 2008!
Follow us on Instagram: #eco__offroad
Vehicle Restoration & Diesel Conversion; Vehicle Importation (Importer of Dreams!)
--From South Africa, Australia, New Zealand, Japan, Brazil, and Parts of Europe!
Email will get the quickest response. [sigpic]21356[/sigpic]

Nice find!!! What are plans for her?

Restoration or DD to drive and enjoy?
Self Admitted Purist
1964 FJ40 Hard Top...doing a true restoration!

Congratulations Dom. I am probably just as excited as you are. Well done! I wish you the best and hope that some day we might be able to shake hands and get to know one another.

Nice find Dom. Now comes the fun part. What is your plan, restoration or daily driver? Working lots of OT to help fund my 45.