So i haven't posted too much in the last while, mostly because my 70 hasn't broken or even really been worked on.

but anyway, some of you saw that i bought a new(ish) Tacoma this year. A 2007 TRD. I bought it with dreams of reliability and comfort. However after a while the realization sets in that it is just a truck... a truck that cost way too much for what it does. still requires maintenance and depreciates at a measurable rate. That plus a handful of new vehicle characteristics the were hard to get over. like drive by wire that felt like it was never meant to work with a manual trans, a bloated dash that made it near impossible to drive in workboots. a V6 that made good power, but with a computer that wouldn't let you use it when you wanted to.....

I could rant for a while.... long story short i sold it.

what owning it did do for me was give me way more respect for the engineering and reliability of my old landcruiser.

So why not buy another.

I always wanted a 60 series, but the thought of buying a clapped out early 80's truck, which would inevitably be full of holes, need suspension, have 500KM and an asking price with too many zeros. That didnt really excite me.

Then this came up. its a 1988 Fj62, with a front clip swap. Its a 3FE auto, but it has a clean body and interior. and the suspension and tires where installed 3 months before i bought it.

It will be getting a 3B swap with a turbo, a 5 speed swap, front a rear bumpers at some point and thats about it. trying to make it into a really nice daily driver/camping/road trip truck.

Anyway here's some pictures, i wont be starting any major work for a little while yet. still gotta pull the motor and trans from the donor. for now i'm just trying to live with the fuel mileage and the slushbox. 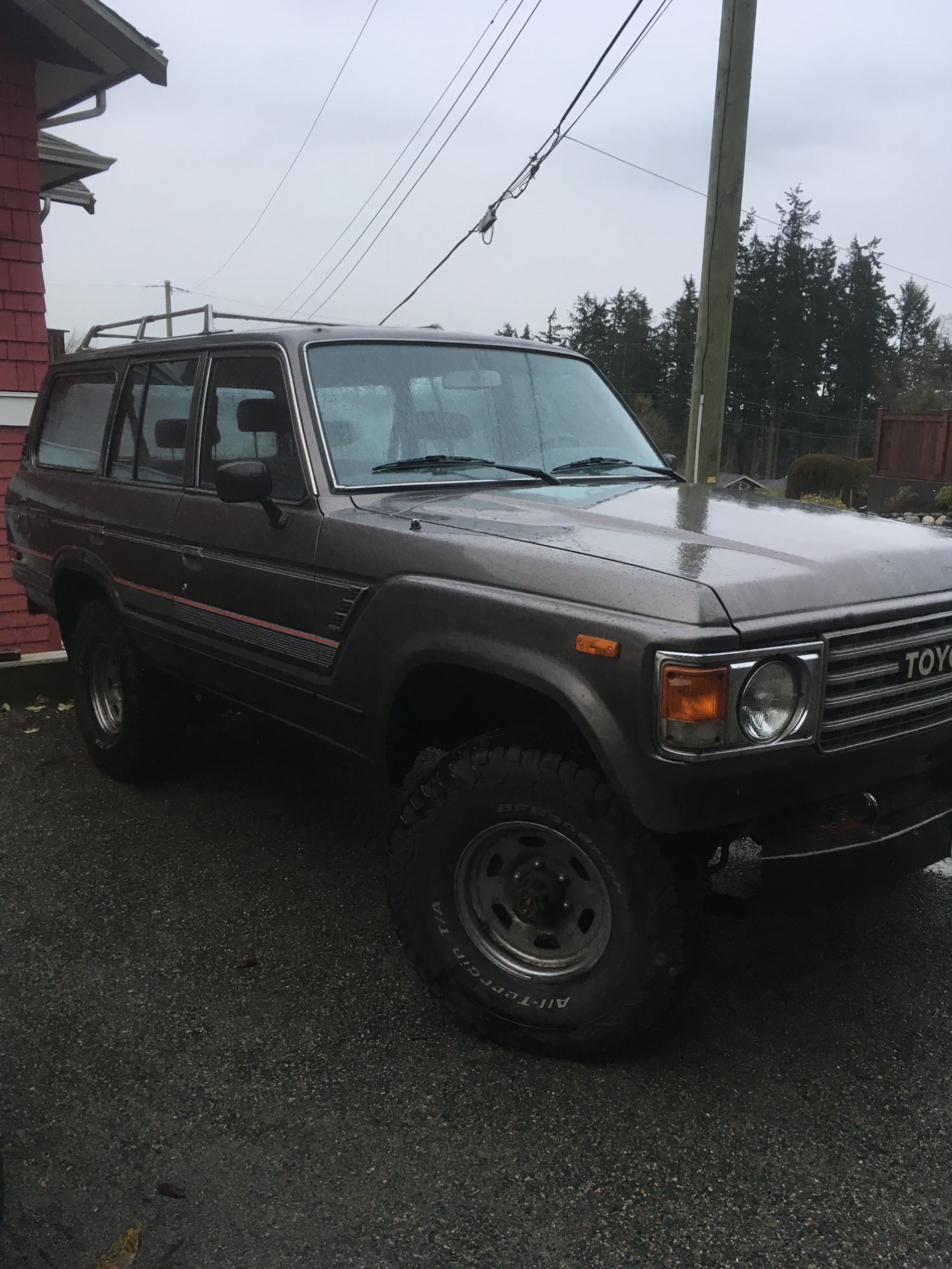 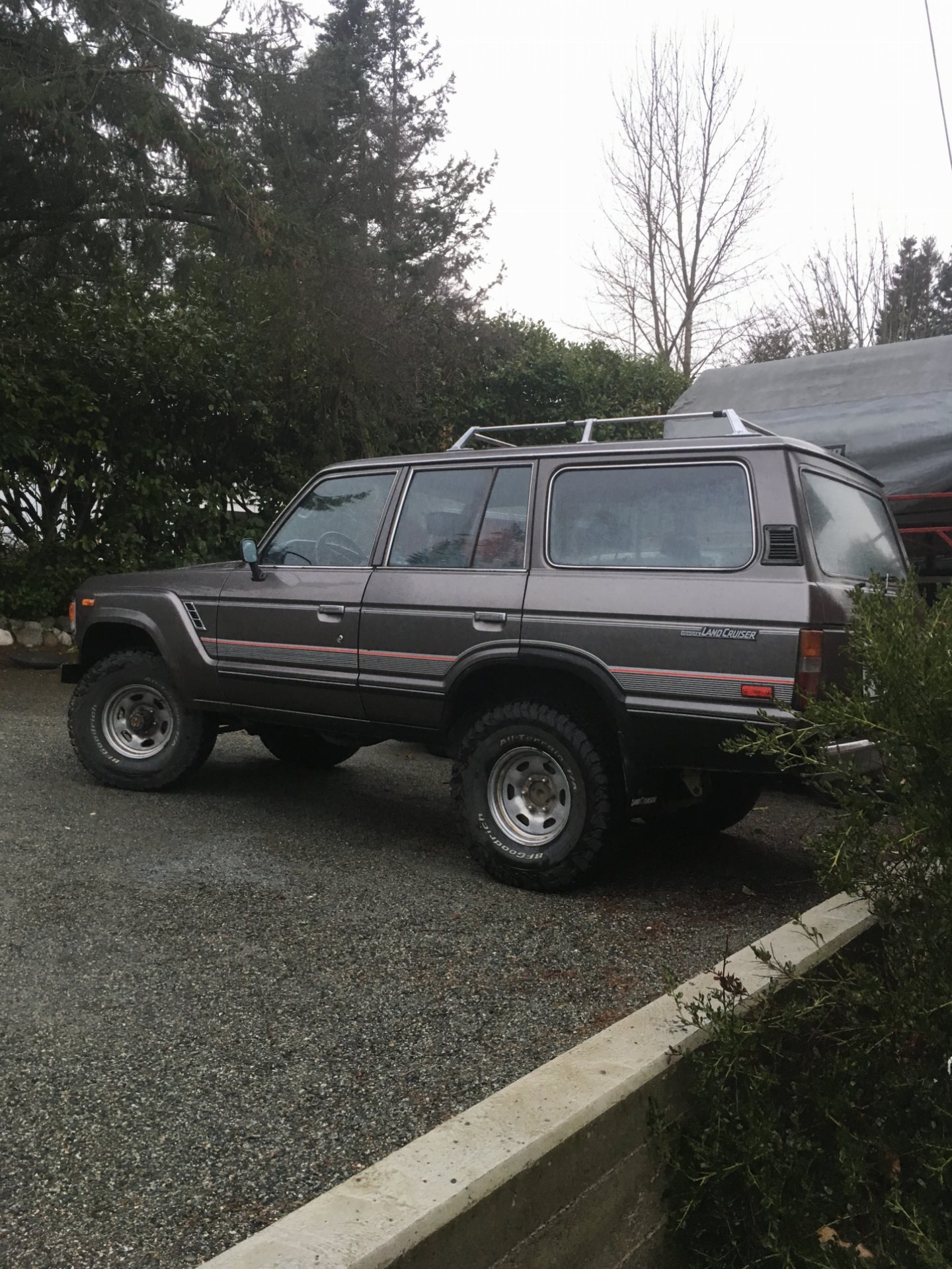 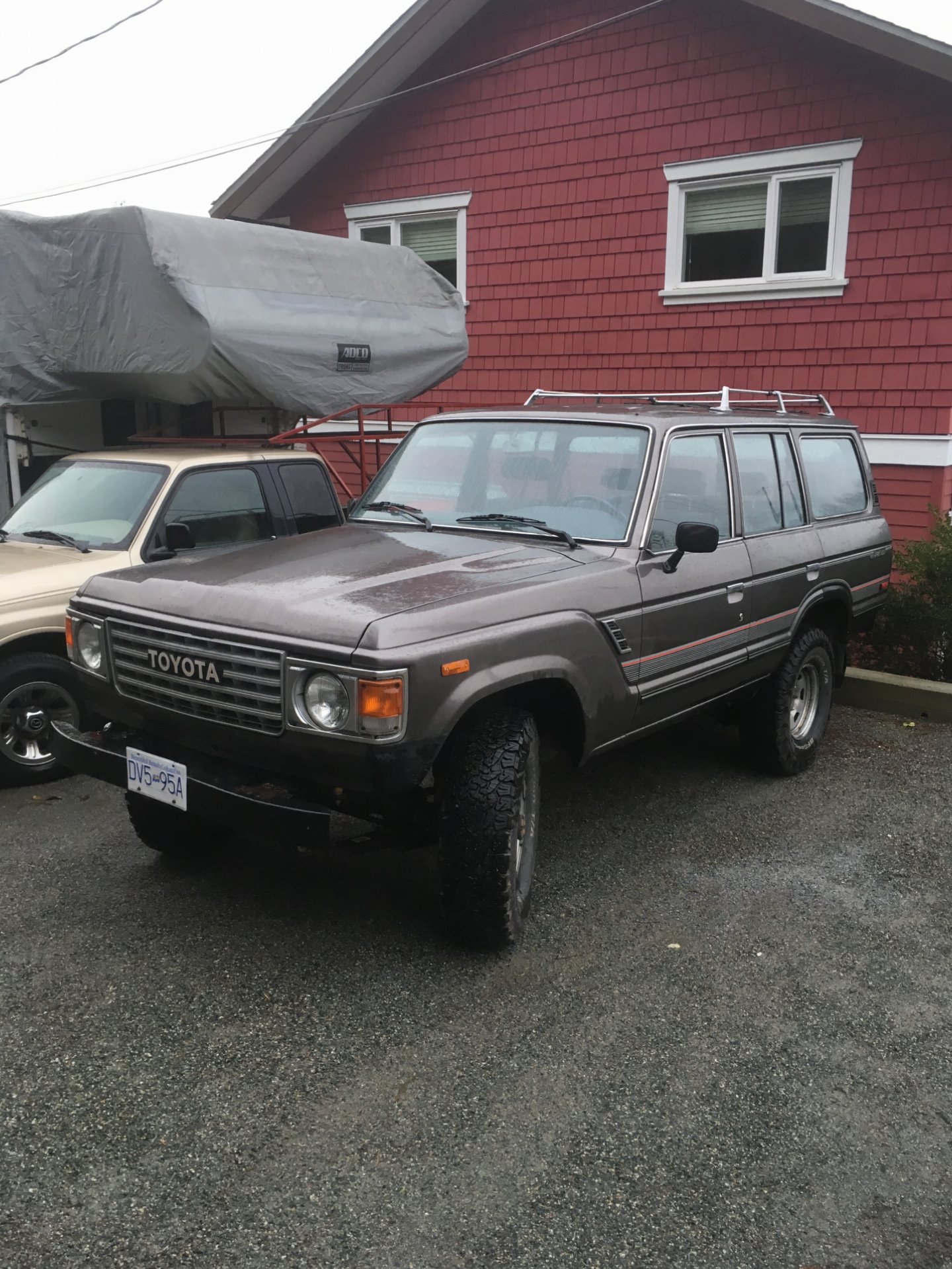 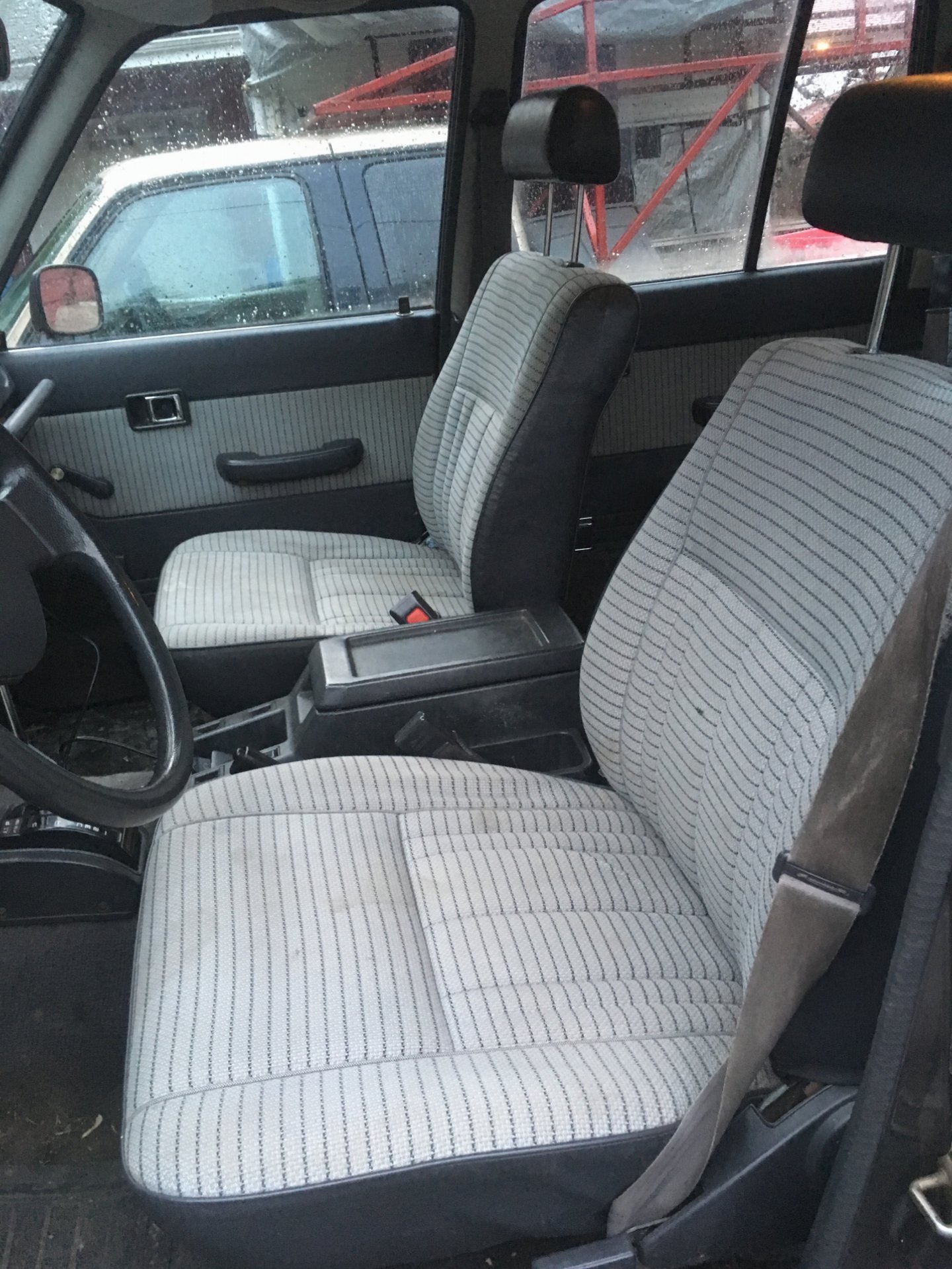 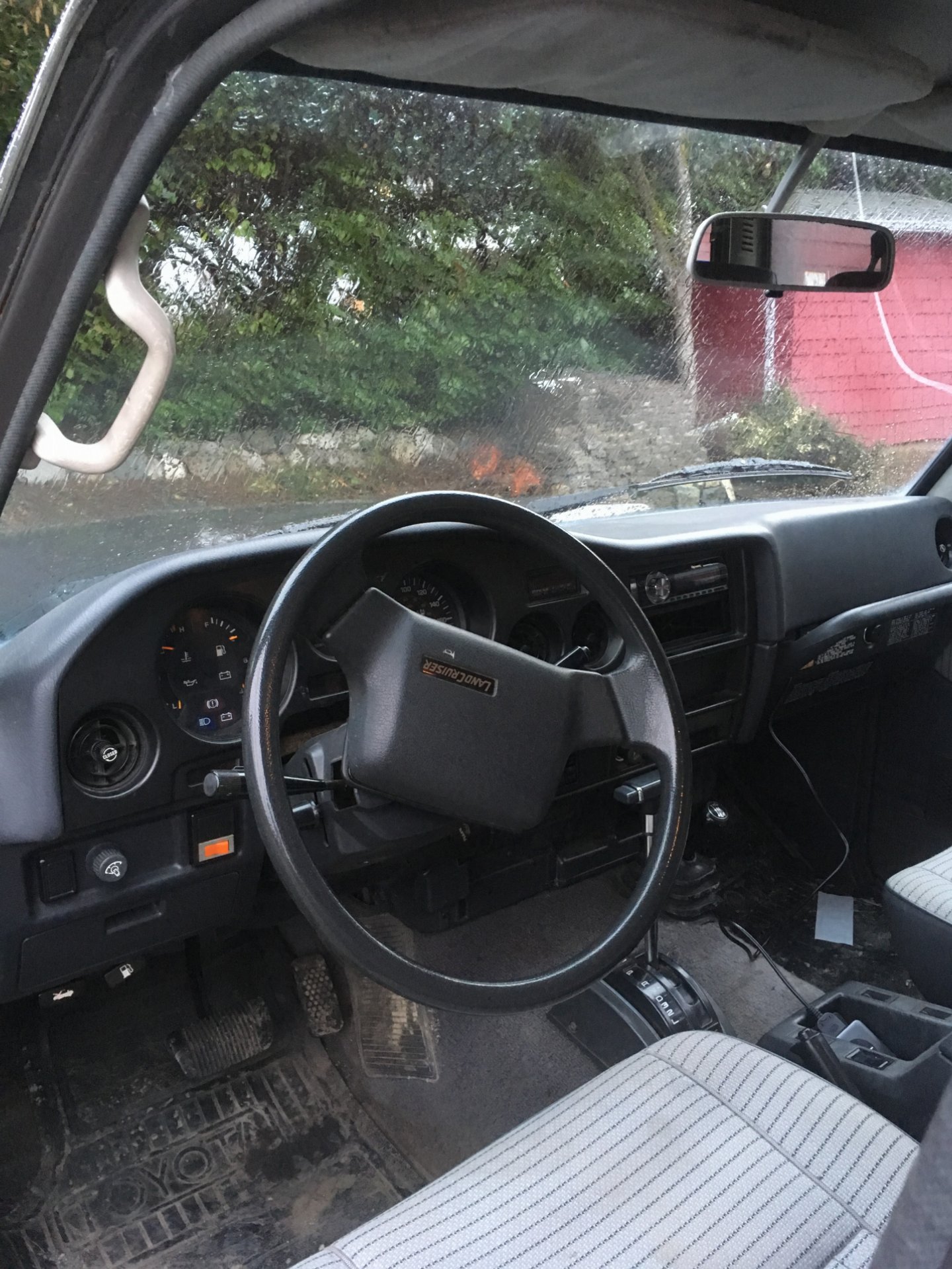 Good, cause 60's rule! You have made a wise decision, I hope you kept all the money from
selling the Taco, you're going to need it, LOL.

I saw the red Tacoma the other day and figured you had parted ways with it, the riveted rack was the best part!

Saw it up close....great looking cruiser.....now for the diesel swappy...

Great to see pictures; awesome project Graham. Can't wait to check it out.

Sometimes I doubt myself on why I keep a 27 year old vehicle on the road, but your story confirms my efforts. Old Cruisers FTW!

Looks good man. Gotta love the 80's pinstriping on a 60

You did look a tad out of place in that taco... 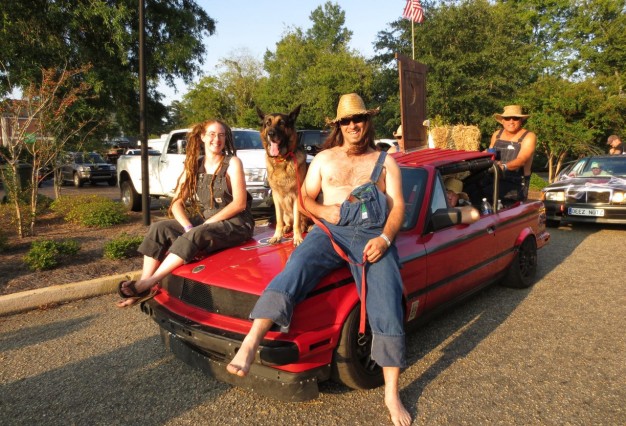 I love Tan, but gray is my next go to colour, you and Jay will have some nice looking cruisers...

Time for an update finally. So I decided to go with a little different route on this build (as I often do).
Basically I had this bj60 frame left over from one of the donor trucks, and surprisingly it's in really good shape. Considering the body was the worst I've ever seen.
Not that the frame under my 62 is really bad or anything, it does need some work to the inside though. And the rear c-channels are starting to go (as they all are).
The frame from the bj60 donor is completely solid for the whole thing, except the c-channel section was Totally gone, pressure washer blew it out.
So I figured I'd start from the ground up and fix the rear section on this one, clean it all up and install the 3b and 5 speed to where it already fits. Then body swap the 62 onto it.
Probably more work in tune end but with a better product.
Here's the frame after pressure washing. Looks like ass but actually is quite good. Lager sections still have factory paint. 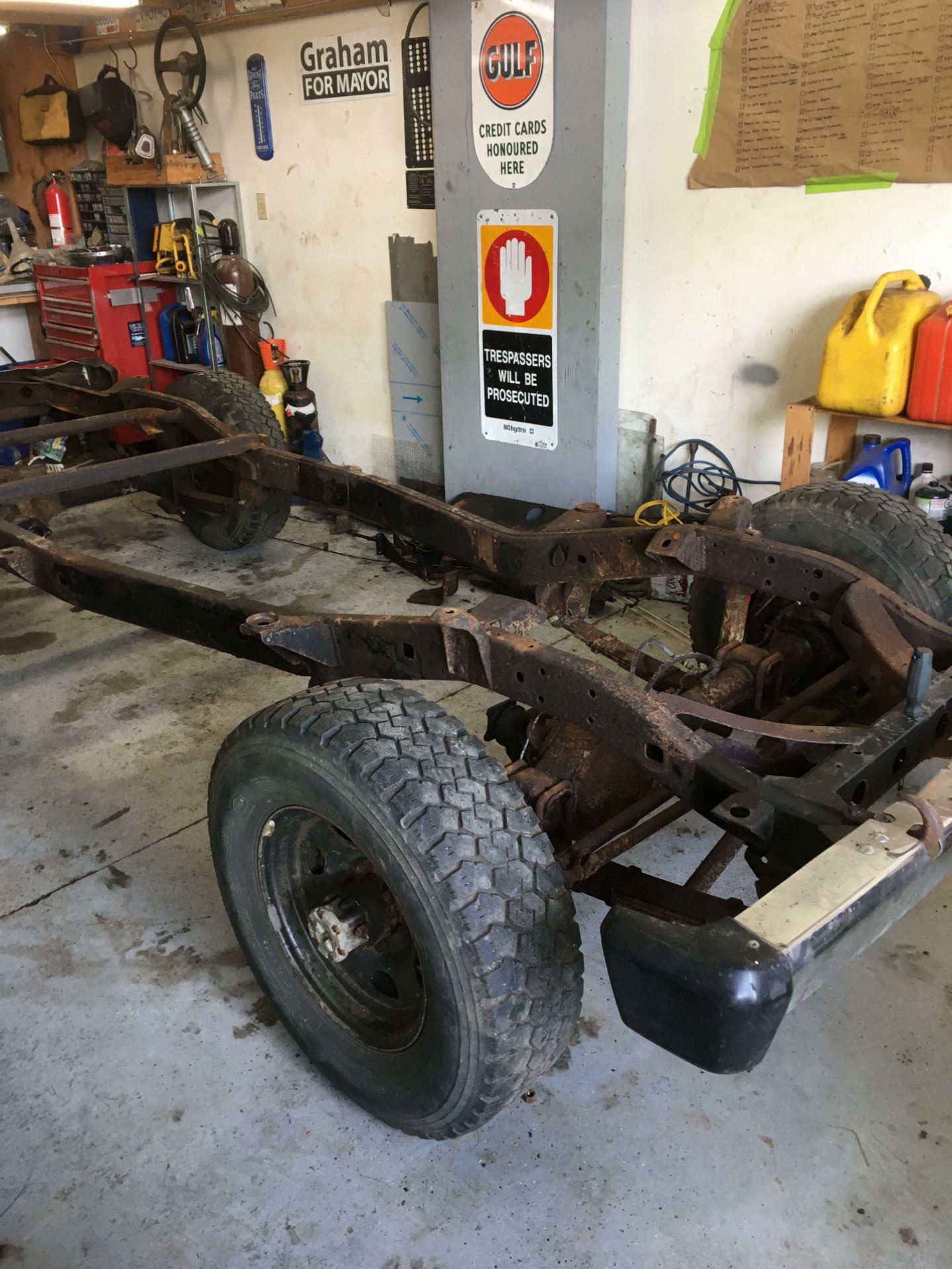 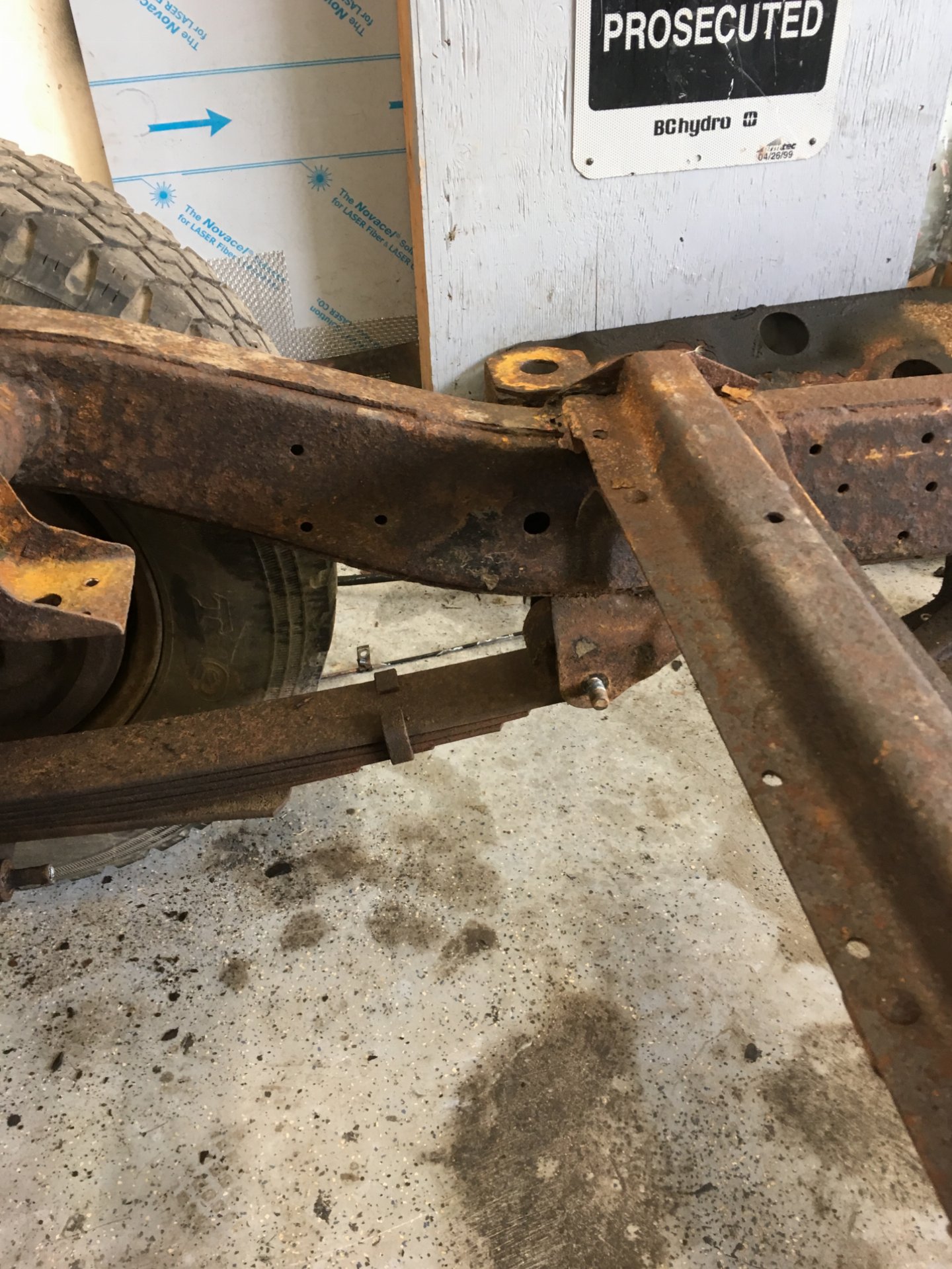 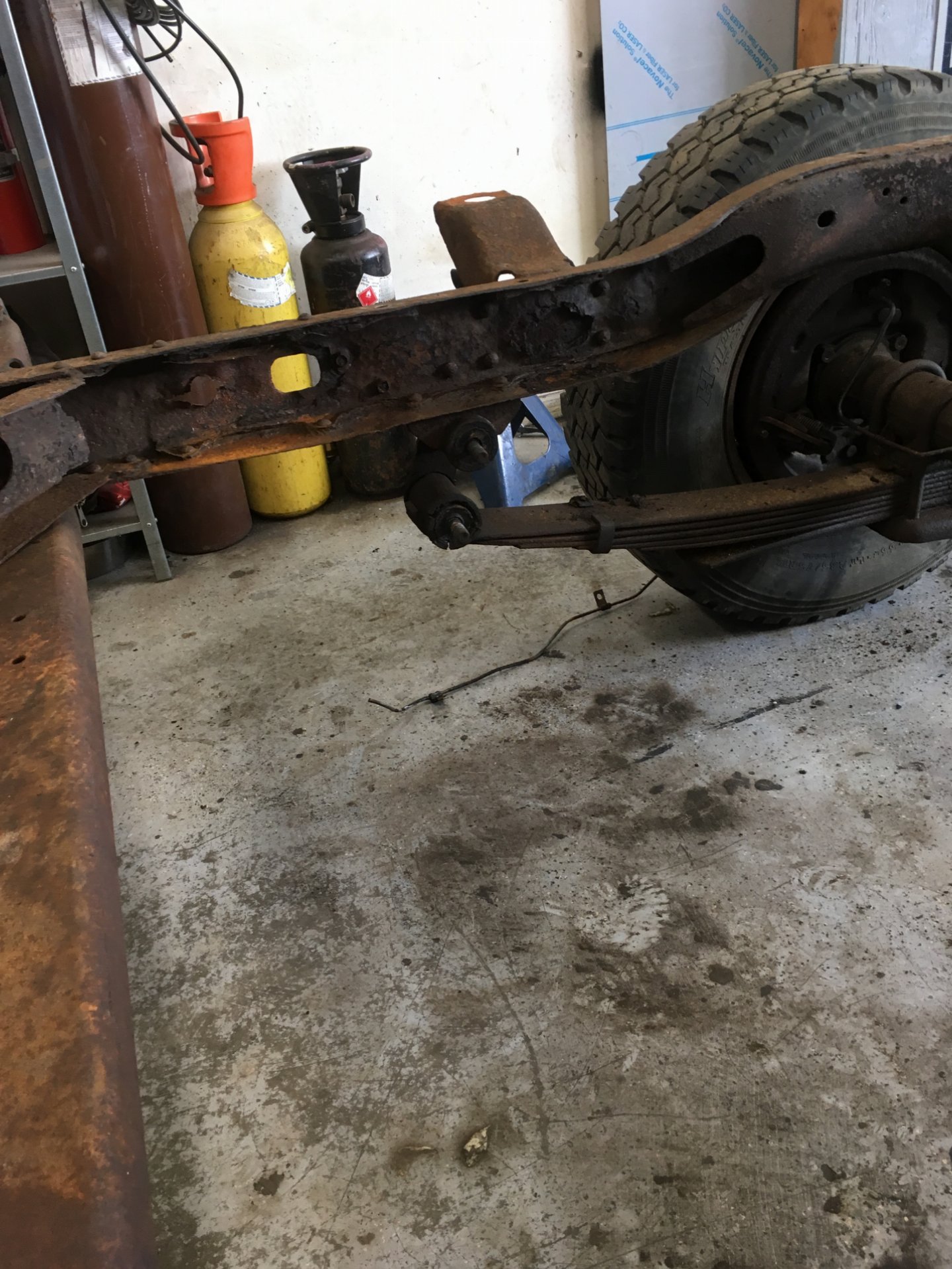 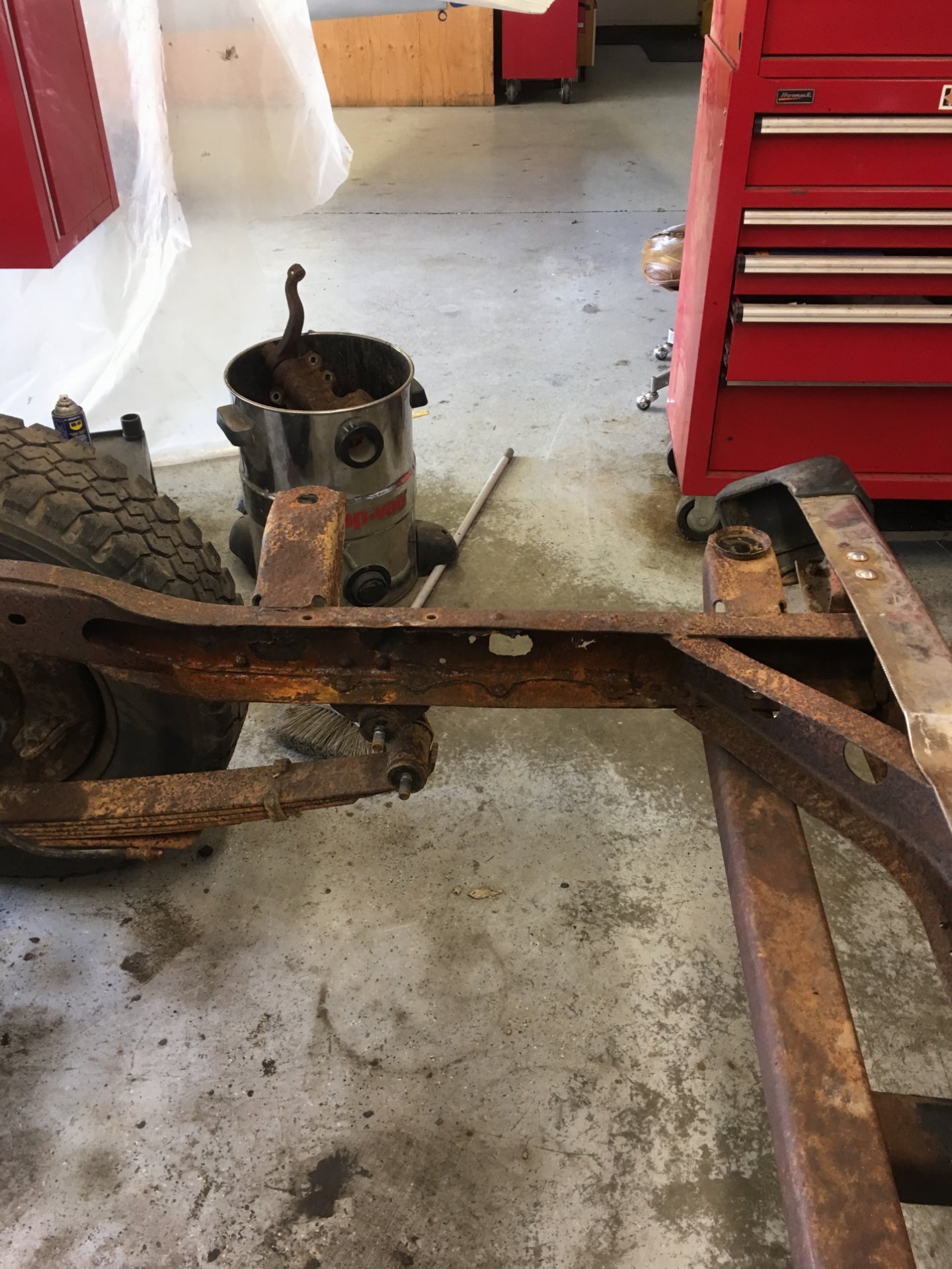 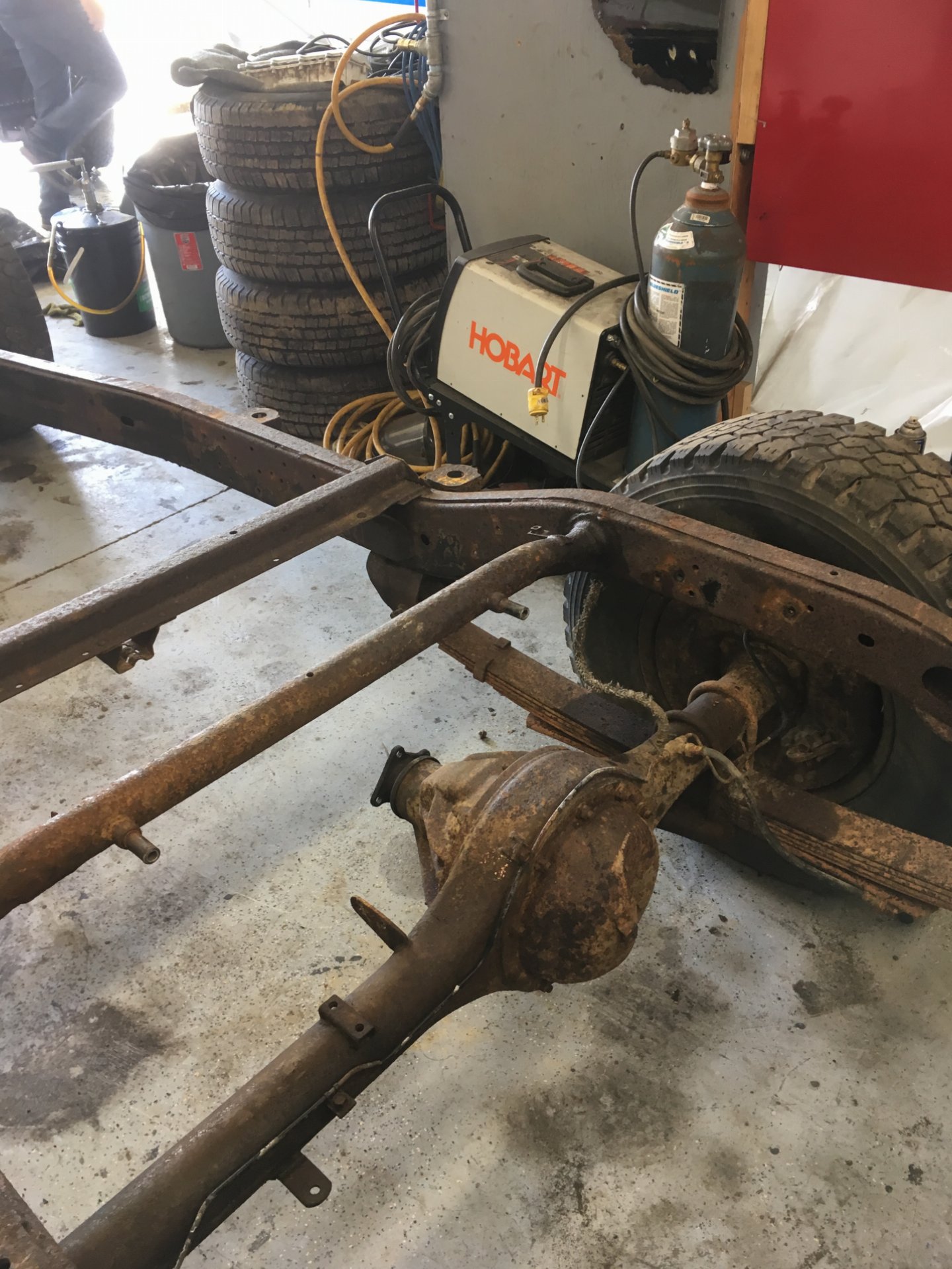 Got right into the heavy stuff right away. Cut the rear section off and replaced with some 4"x2"
Square tube, which matches the seize and shape of the frame perfectly. Then built a new rear x-member and re mounted the body mounts, spring hanger and spare tire X-member. 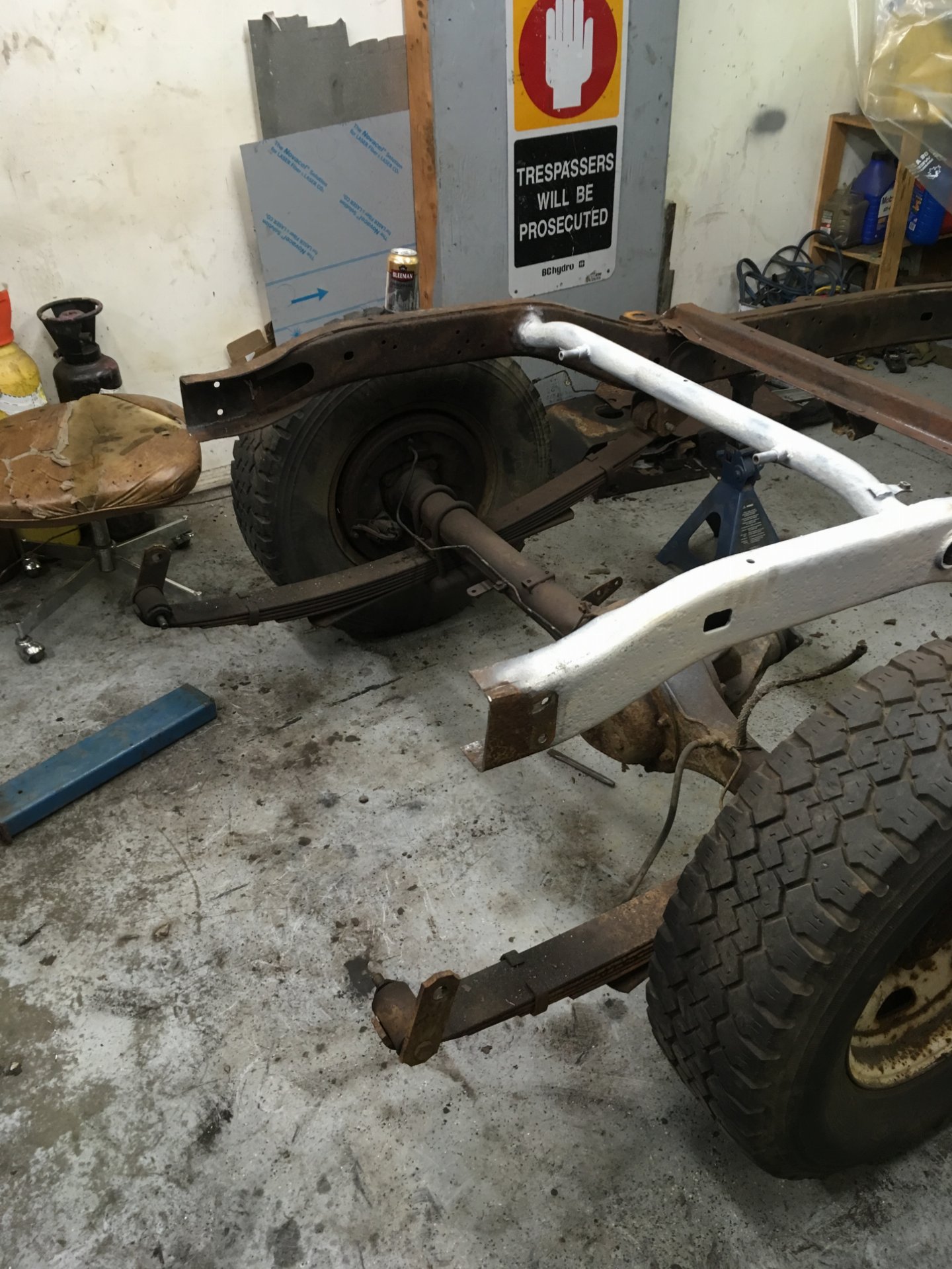 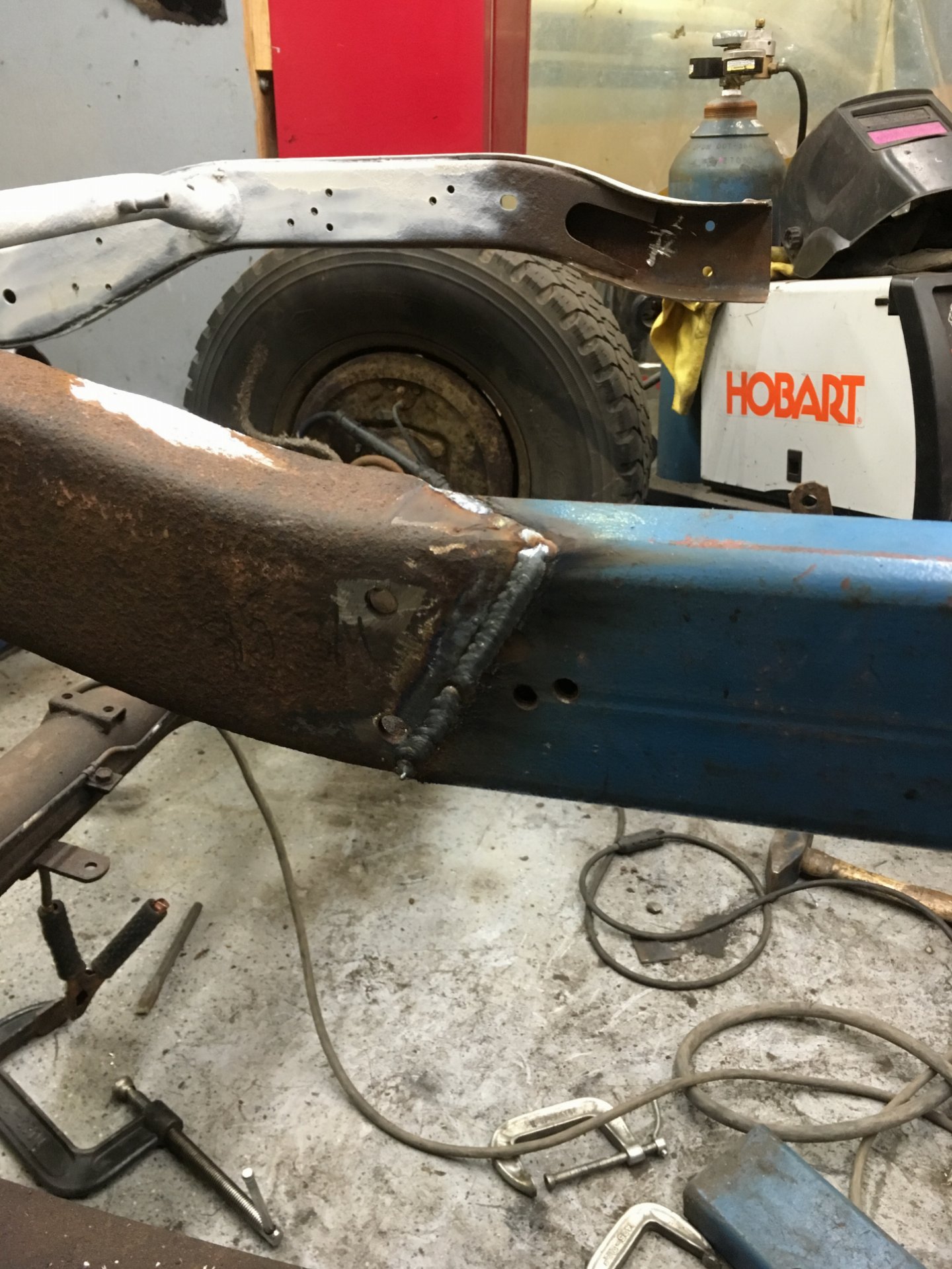 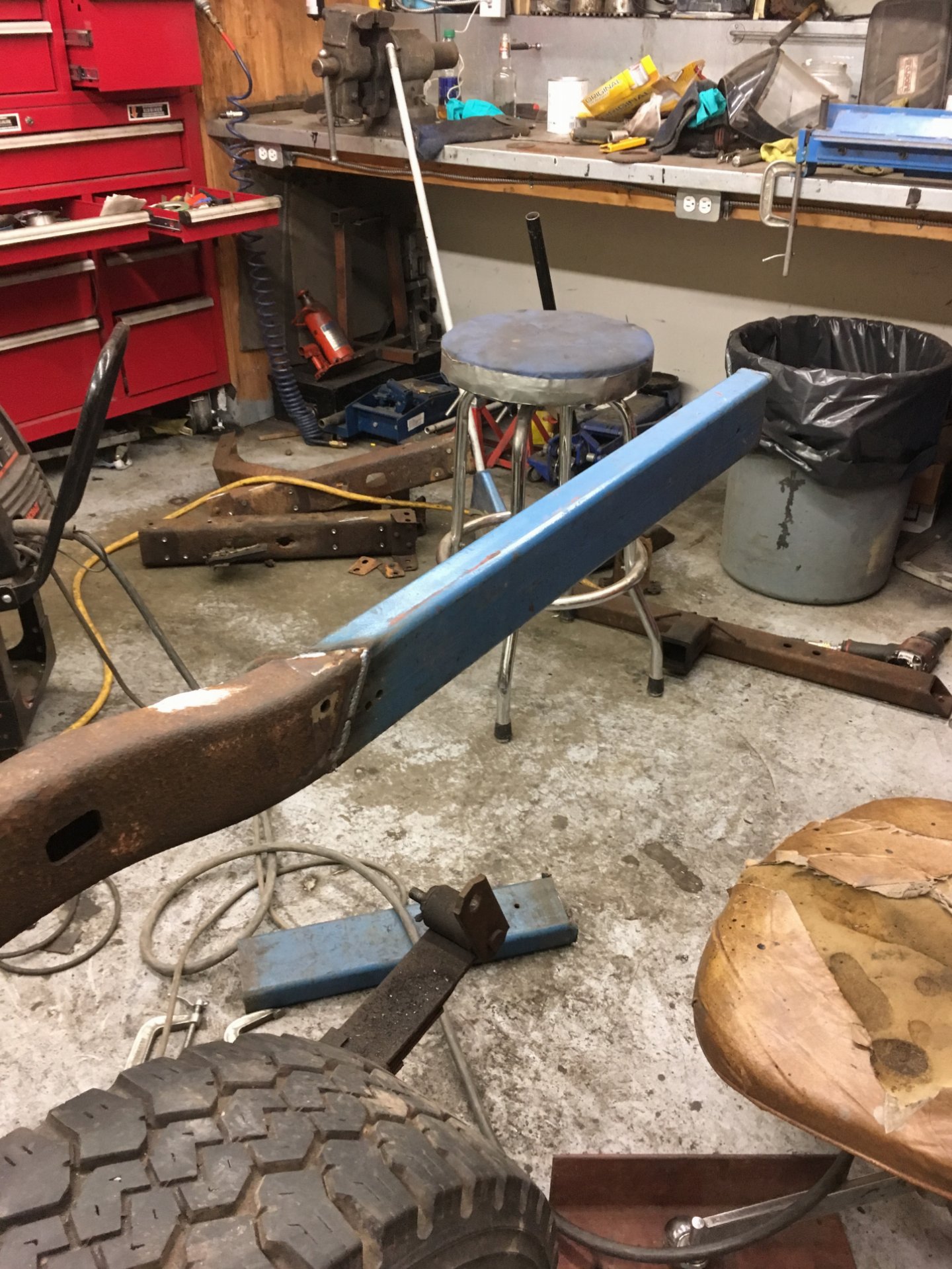 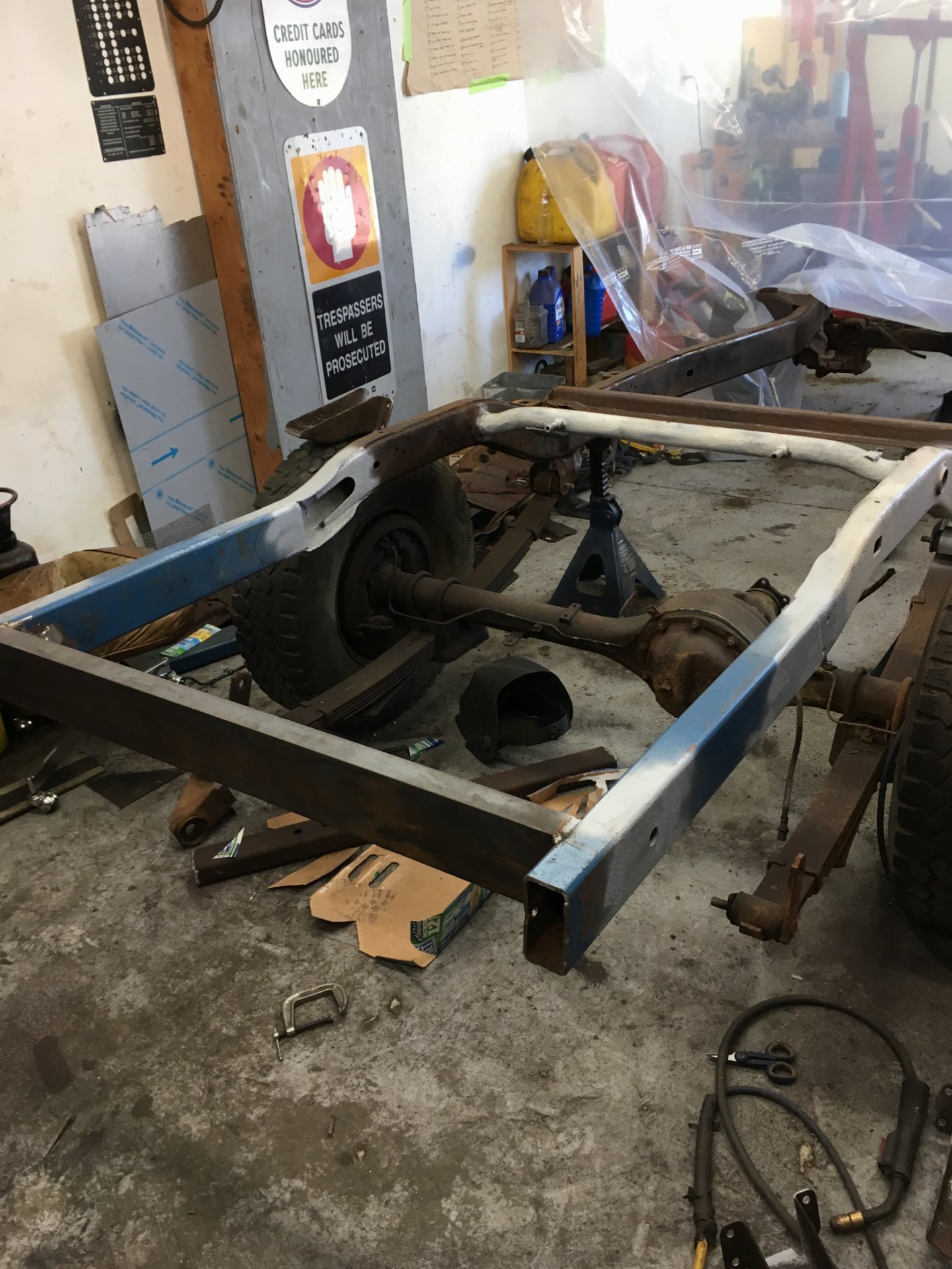 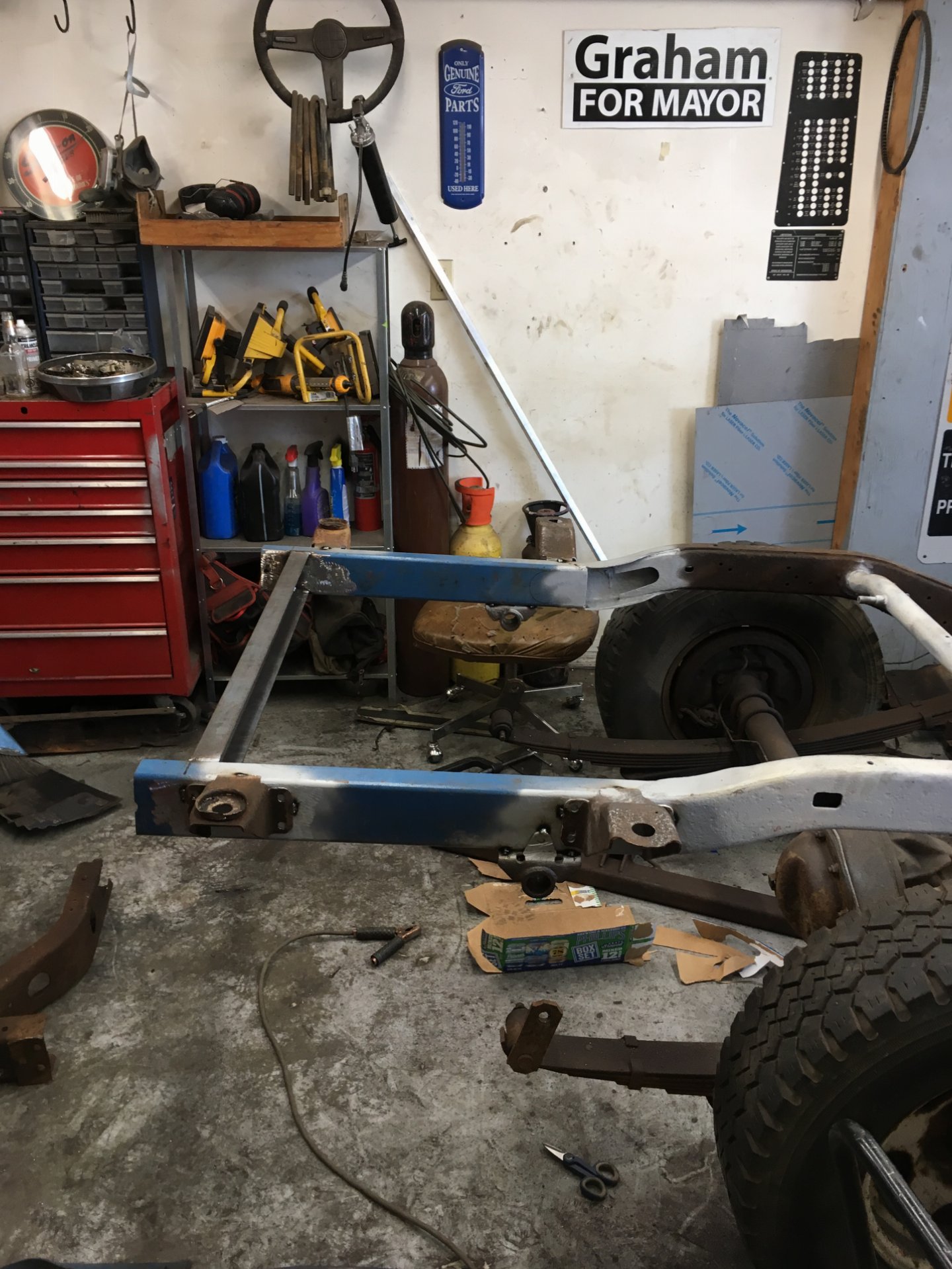 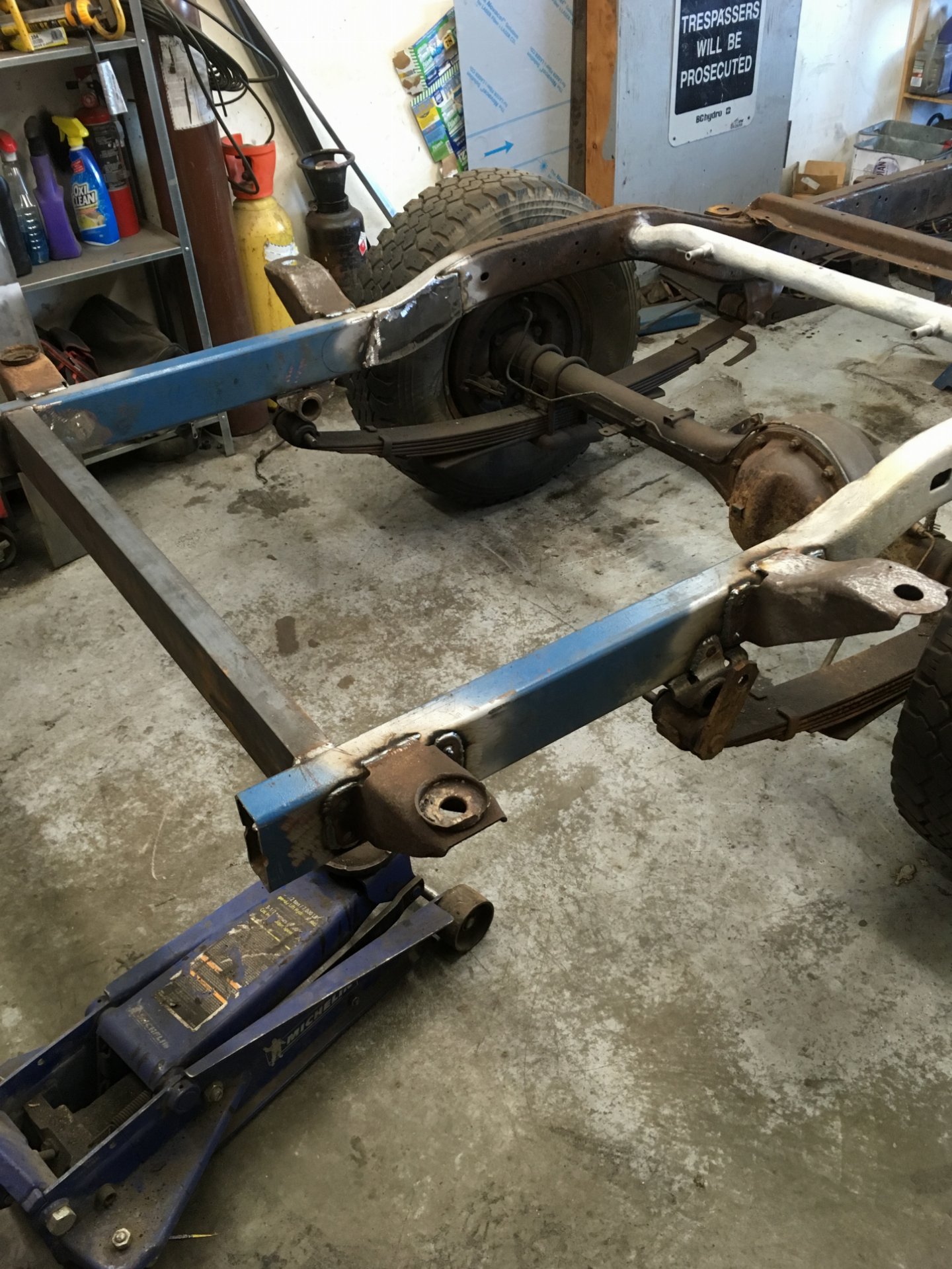 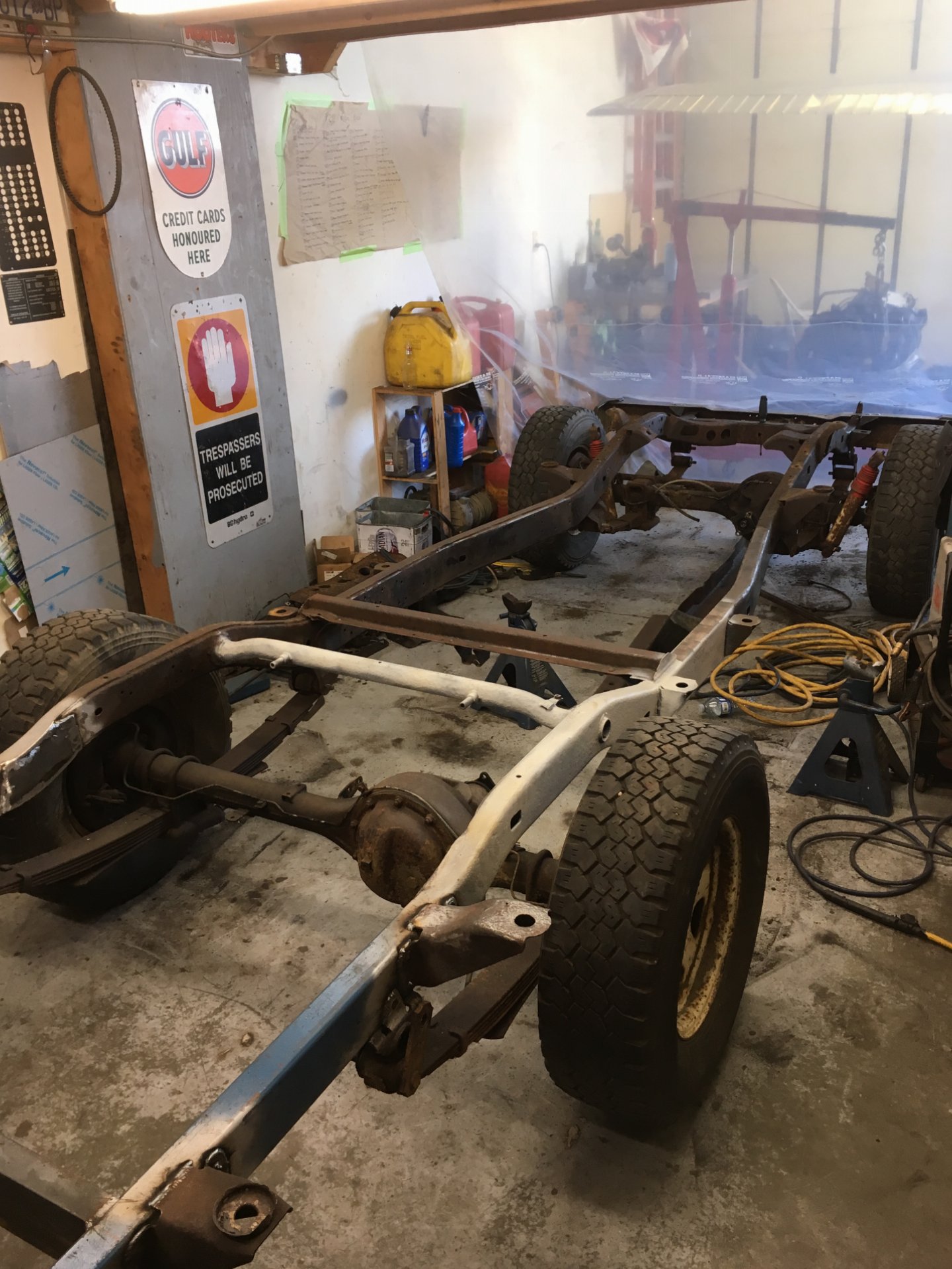 Then spent today finishing it off.
Last couple welds, and then a miserable time with the wire wheel. And finally paint.

Next up will be pulling the 3b and 5 speed from the other donor truck. Cleaning it up and installing it to this frame.
But that's next weekend. 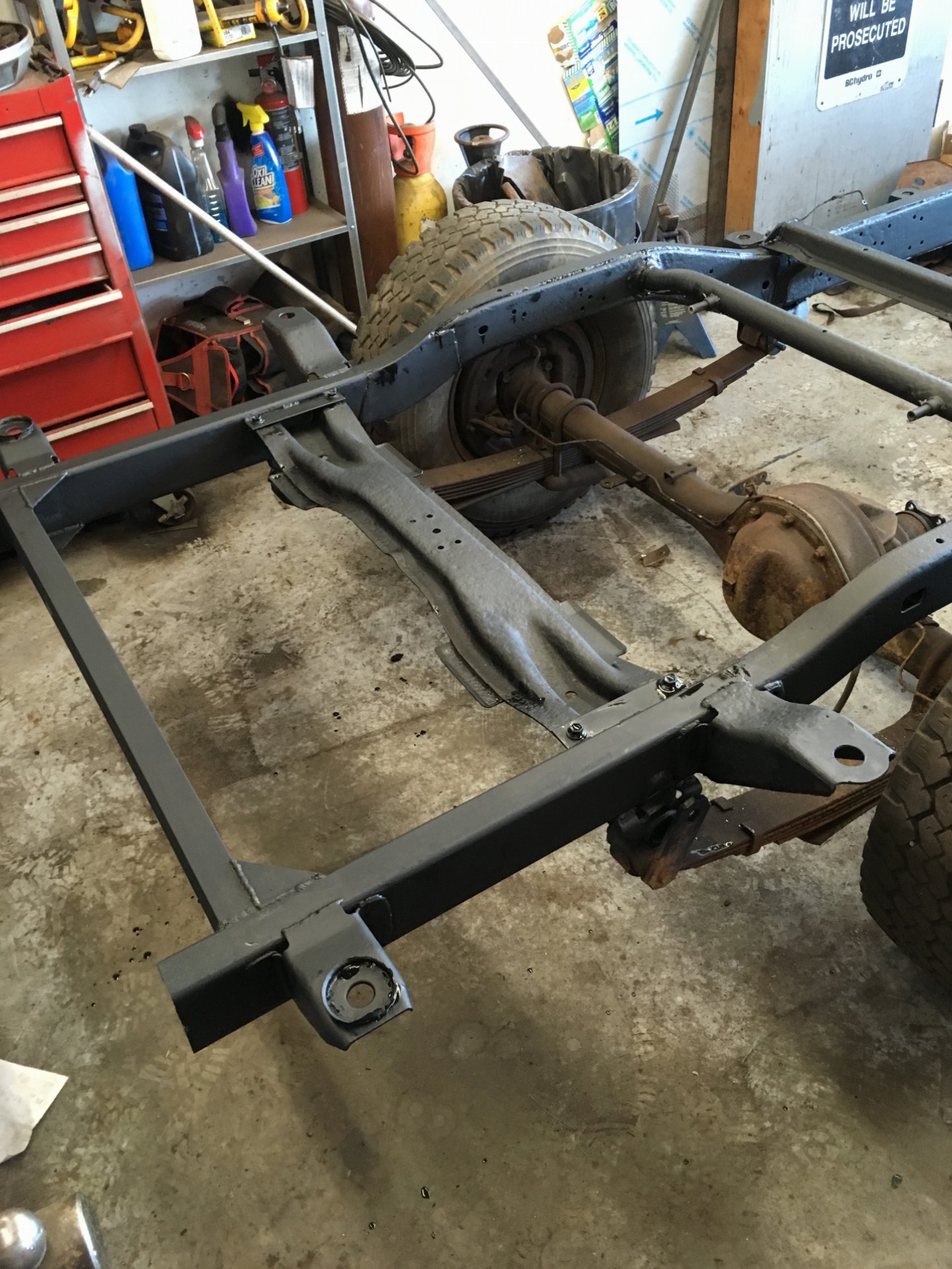 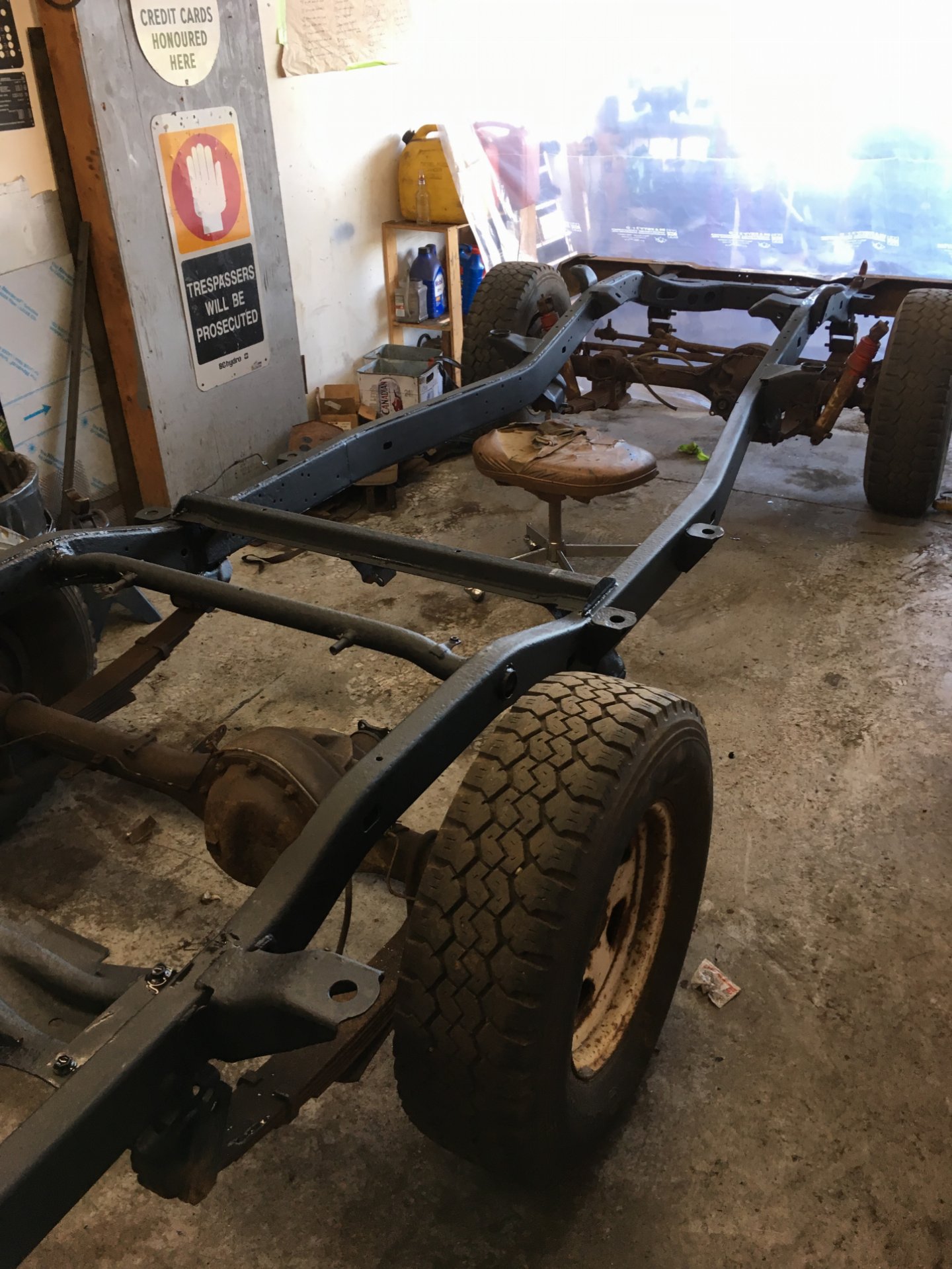 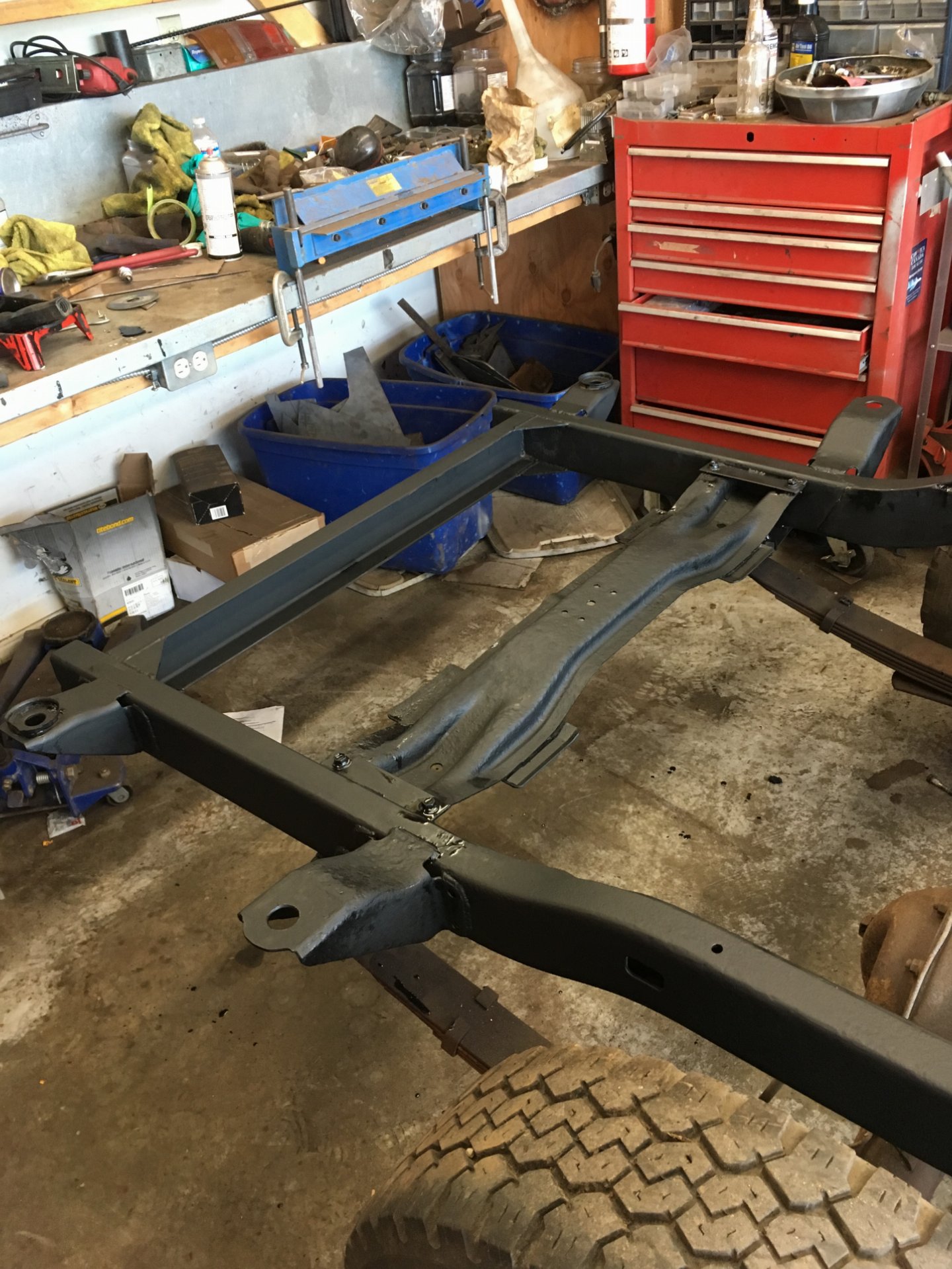 Sweet! You gonna cut mouse holes into the bottom of the frame for better drainage?

PeeZed said:
Sweet! You gonna cut mouse holes into the bottom of the frame for better drainage?
Click to expand...

yea i'm gonna do something like that. theres still a little junk to get out of there.

Nice, I look at what you've done there and not so fondly remember what I went through. I really should have pulled the body off.

I can't believe you found that under a Canadian bj60...

seapotato said:
I can't believe you found that under a Canadian bj60...

Especially when I romoved the body by hand. 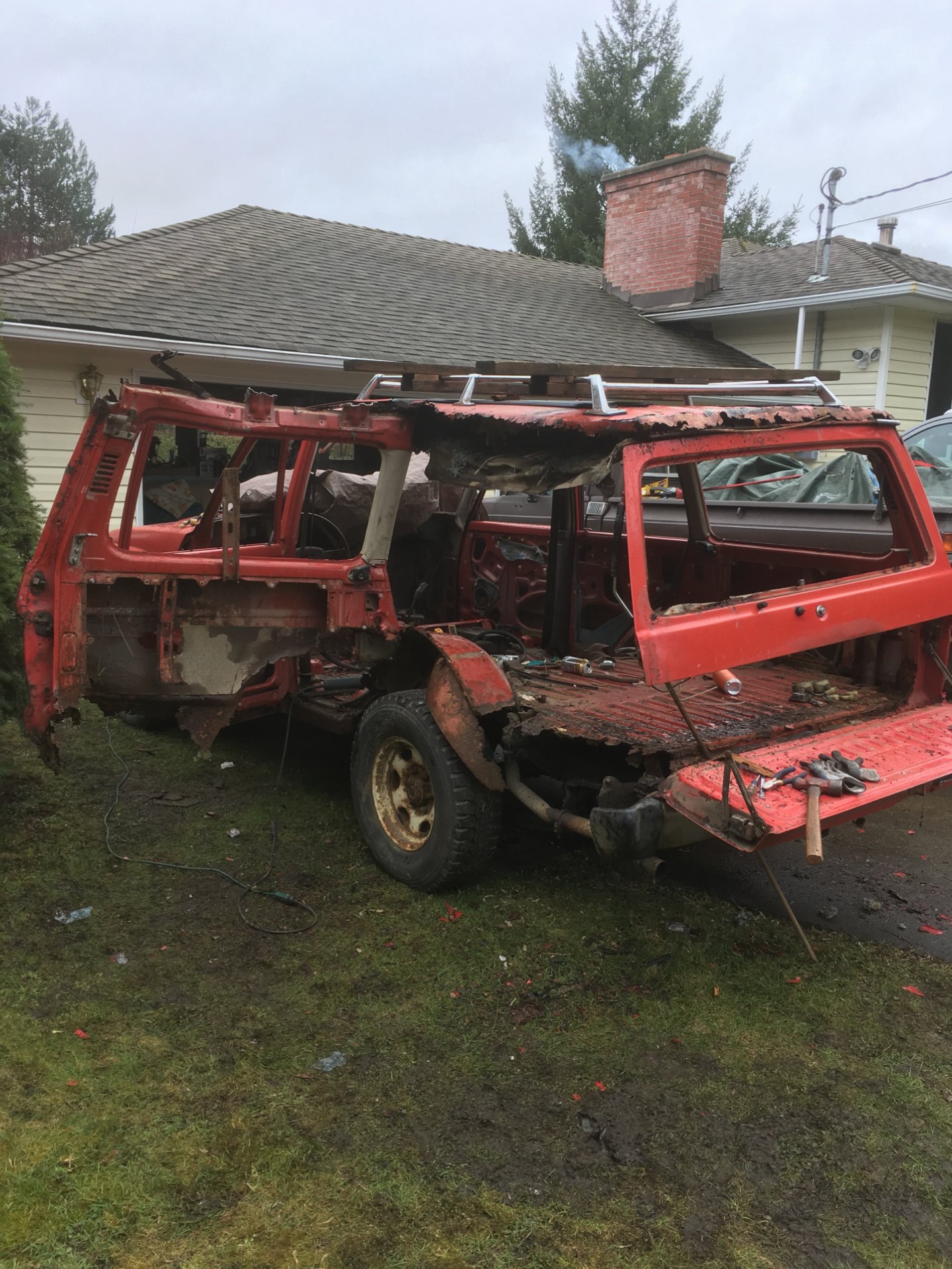 Don't know why you didn't just use that body.
You must log in or register to reply here.