My cousin sent me these pics from Klamath Falls. Evidently the guy restores Cruisers and has a bunch for sale. A little too $$$ for me, but maybe one of y'all could use the info. They look really clean. I'm not affiliated, but I could get more info and more pics from my cousin if anybody is interested. 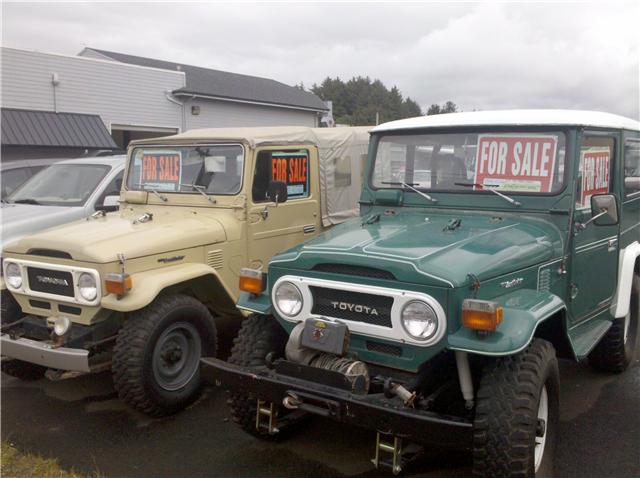 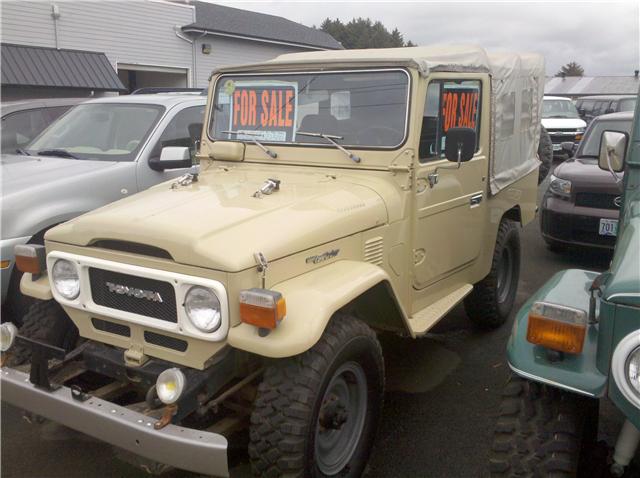 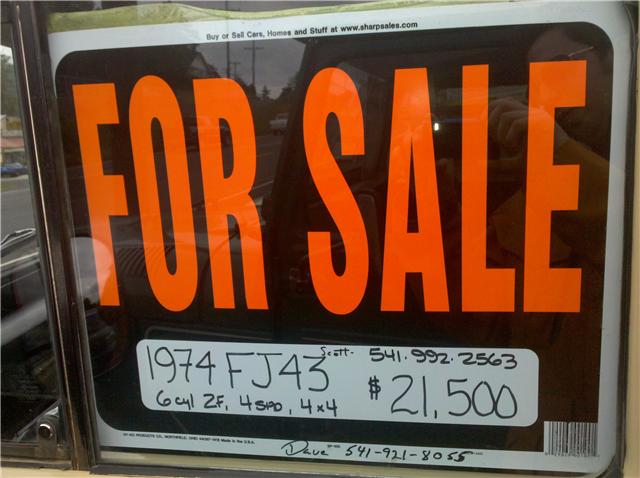 
Yeah, I wish I had the $$$ too for the 43. I saw a mint green FJ-40 this guy has last Summer, and it was restored to perfection. Klamath Falls is right on the coast, so I'd be a bit leery about rust, but they sure are clean looking rigs now.

I don't know about the year to body pieces. bib, windshield frame, and doors don't appear to be from 74?? makes me wonder about the title???

sure looks purty tho.

AKcruiserfreak said:
Yeah, I wish I had the $$$ too for the 43. I saw a mint green FJ-40 this guy has last Summer, and it was restored to perfection. Klamath Falls is right on the coast, so I'd be a bit leery about rust, but they sure are clean looking rigs now.


Klamath Falls is NOT near the coast. Grew up there....high desert, Eastern Oregon, 4500 ft elevation with very little precip.

3_puppies said:
I don't know about the year to body pieces. bib, windshield frame, and doors don't appear to be from 74?? makes me wonder about the title???

Very suspicious on how much of that one is actually a 74 and for that price way to much for a non original 43.
3


didn't notice the vent windows the first time around, also the chrome welting around the windshield.


Sorry, I meant Lincoln City, which is right on the coast. My cousin lives in Klamath Falls, thus my confusion.

i would guess it's a central american truck titled with a us vin instead of being imported properly.

i'm willing to bet it came out of colombia, sa

Further complicating the identification, the caption under the picture of the 43 on his website (in the 'Stable' section) says Tan 72 FJ43, and the bezel is obviously 79+.

There were a lot of different things done down in Colombia when they were imported and over the years as people keep them on the road swap parts. For instance mine has a 70 series turn singals that are from the factory that way. That and you could still get 80 series with carburated 1FZs. It is likely that it did come from Colombia but they are also sold all over (especially western) Europe and Japan.
P

Guys,
I have been looking for a decent FJ 40 for over a year for around what he is asking for the green hardtop ($ 5500). I also liked the colour (not too crazy about the white pinstriping, tho) and the fact that it has a working winch and not too much rust to deal with. It also has a slight lift and springs and shackles look in decent shape.
So, I called the guy up (Scott Gesik) and he came over as very down to earth and sincere. Took the time to answer a laundry list of questions I had. He told me that the rig starts, drives and stops as an FJ 40 should (that could of course mean a world of things, anyway....) and sent me some additional photos. The rust is concentrated at the rear curvature of the hard top panels (near the top hinge of teh ambi doors), rest appears as surface rust. Interior looks pretty decent. Scott did tell me that the truck will need a tune up, and flushing of fluids etc. He also told me in passing that the rig had been parked for 5-6 years. So I am expecting everything to be dried out.
Another point is that it has some huge cutout on the hard top cap that has now been patched up by Gesik (have not received any pics of that , tho I have requested them).

Now.... I would like to buy this but am a gazillion miles away in The Netherlands, Europe adn therefore unable to inspect in person. So was wondering whether anyone would care to have a look at this and let me know whether it is worth buying. Would very much appreciate a keen TLC 40 eye (since I am very new to all of this.... do not want it to be only an emotional purchase, want my brain to have a say as well, hence the shout out to you guys).

Lemme know. Thanks a bunch
P

AKCruiserfreak, saw that you were online while I just completed my post in the below thread: FJ-43, 40, and 45 troopy in Klamath Falls, Oregon. Think you (or your cousin) can help me out? Rgds. Pagey

He is in Alaska judging from his Location Avtar. Are you moving here to the states? I know for a fact you guys have diesel FJ43's roaming all over your land. Might be a better idea just to bring one over with you.
P

Jason, thanks for the quick reply. Since AK Cruiserfreak stated that his cousin was the one that sent him the pics being close to where this Cruiser is for sale, i was only inquiring whether his cousin could help me out by checking out the rig (not AK himself). I am not moving over to the States and yes, we do have a lot of diesels, but the prices are pretty high and the specs not as good as those in the States (which are usually with nice upgrades). For the sake of clarity, I am not interested in the 43 but the green FJ 40 (which was also in the initial post/pics)
You must log in or register to reply here.