Modernizing my 02 LX has been a blast over the past couple months I've had it. I have my backup camera displaying on the nav screen (thank you Naviks) and iPod integration installed (thank you USA SPEC), so naturally Bluetooth hands free calling was next. The USA SPEC BT35-TOY seemed like the logical choice for me after much research, especially after I saw @Texas993 's write up.

The BT35 is probably not the superior product on the market for these rigs, but it does what I need, that being when someone calls, it will interrupt whatever source you are using on the head unit and automatically switch to the Bluetooth source (CD). This way I don't miss possible important phone calls while my stereo volume is up or if I don't feel the phone vibrate. The audio quality of phone calls is also very good. Better than the factory Bluetooth in my old 2007 QX56 and better than my old 2007 L322 Rover. I've been told the quality of my voice through the supplied microphone is also quite good.

I AM NOT A CERTIFIED AUTO MECHANIC, TECHNICIAN, OR ELECTRICAL EXPERT. PROCEED AT YOUR OWN RISK.

1) Remove the wood trim bezel that surrounds the head unit. I put a rag over a flathead screwdriver. Try and pry the bezel from the four points highlighted with arrows in the photo. That’s where the retaining clips hold it in. Mine was stubborn, but not too hard.

2) In order to fully remove the trim, I believe there is a wiring harness you’ll also need to disconnect from it that supplies wiring for some other buttons like the power antenna and ext. thermometer. 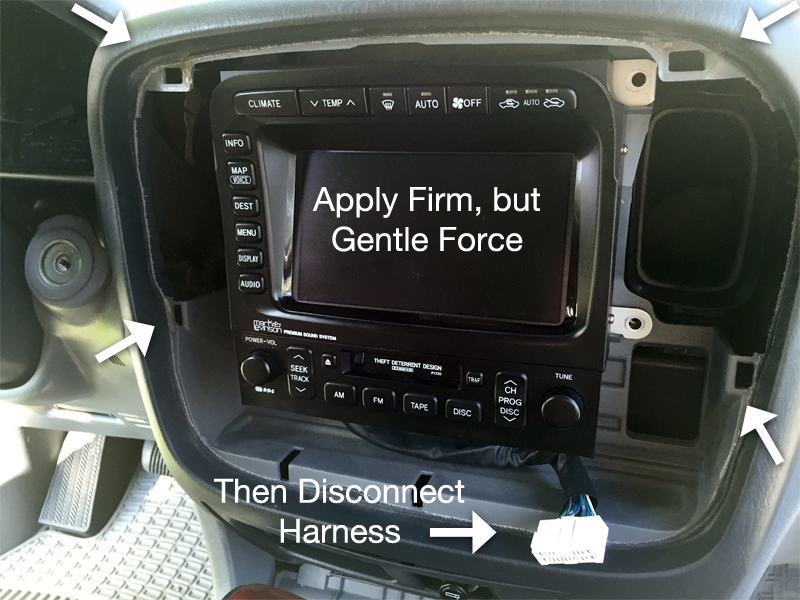 3) Remove the four phillips head screws indicated by the arrows and slowly pull the head unit out. I placed a cloth on my shift knob and was able to balance/rest the head unit on that due to the tension of the wiring harnesses (that we won’t be messing with here). 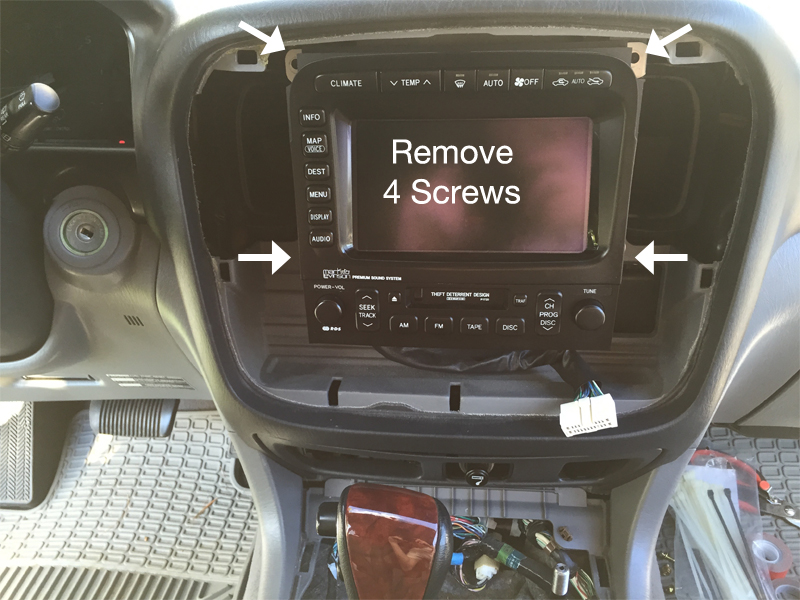 4) Remove the glove box, first by unscrewing the two screws at the bottom, then by disconnecting the glovebox damper clip, which should allow you to drop it all the way to the floor. 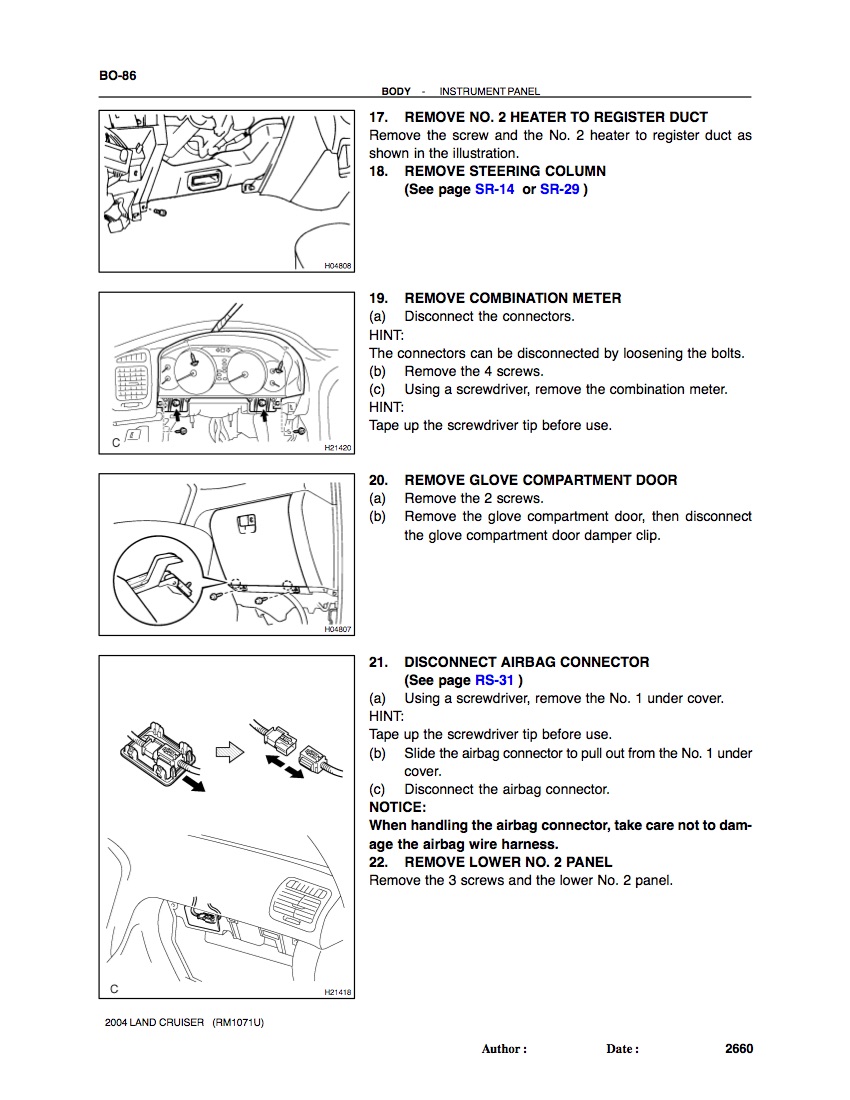 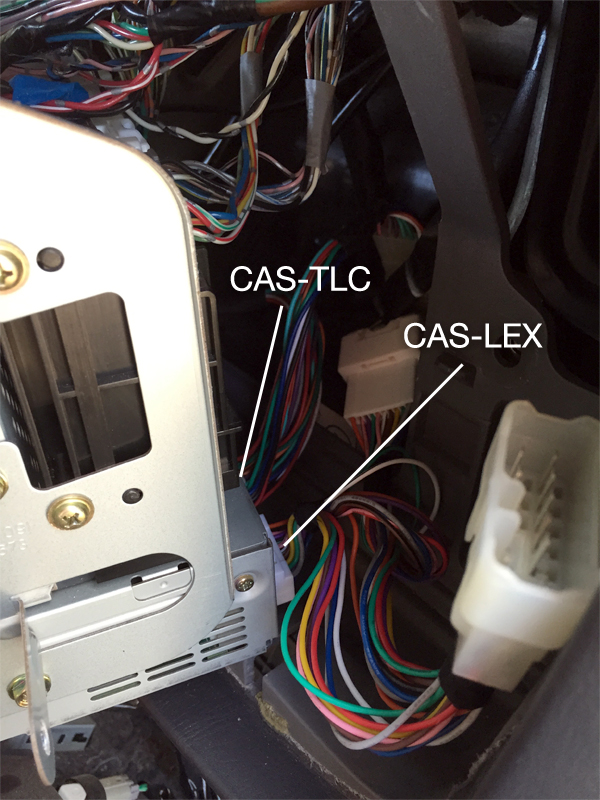 2) Decide where you want to place/mount the Bluetooth Module. I placed mine in between the driver-side center hvac register and the dash/gauges. There’s plenty of room back there to be able to run the cables and microphone wire. Not to mention it’s a relatively easy location to access if I need to for some reason down the road. 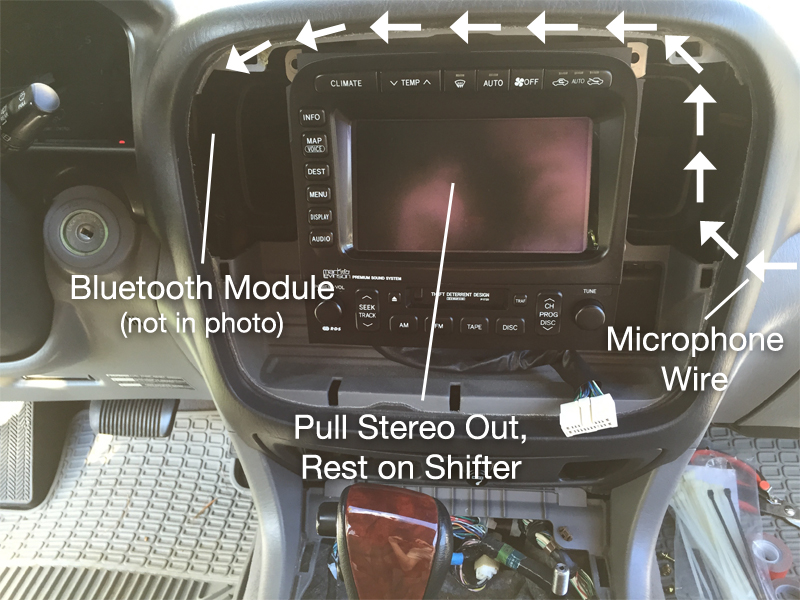 3) Run the CAS-TY35 Cable, from where it’s connected to the CAS-TLC harness behind the head unit, up and over the hvac register to where your Bluetooth module rests.

4) Decide where you want to mount the microphone. I took the suggestion from the instruction manual and mounted mine on the overhead console, running the microphone wire along the headliner to the passenger side, down the A-pillar and behind the glove box.

5) To remove the overhead console, remove the screw from the sunglasses holder and then pop the trim at each of the four corners (as shown in the photo). 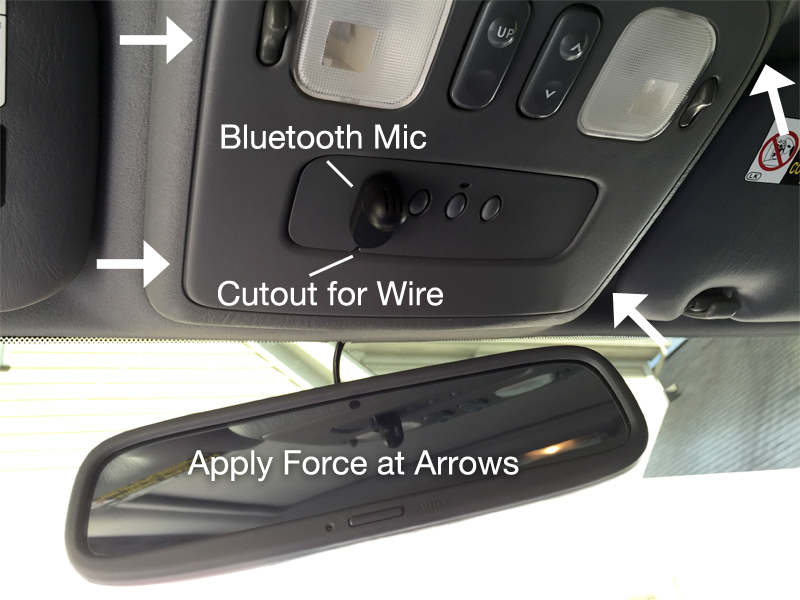 7) Mount the microphone to the trim that surrounds the Homelink buttons using the double sided tape that comes pre-adhered to the bottom of the microphone. Be sure the spot on the plastic trim is clean and dry before adhering the microphone. 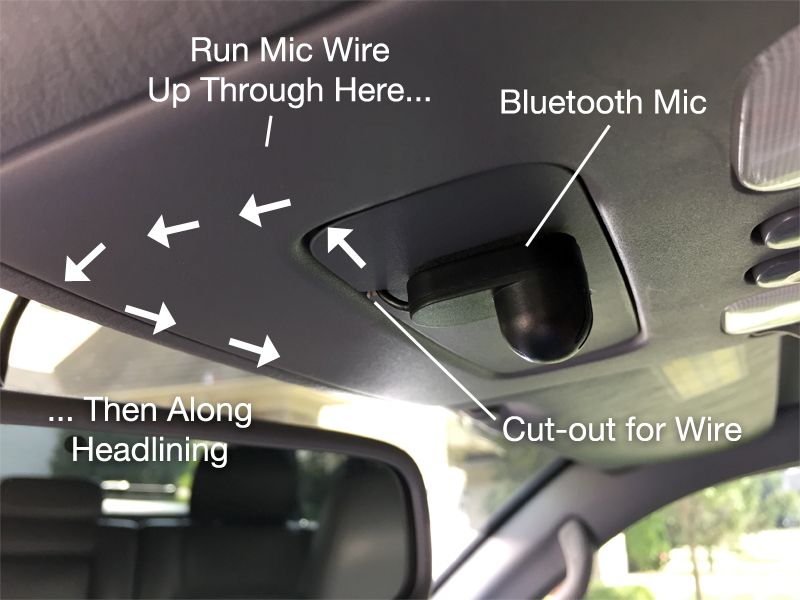 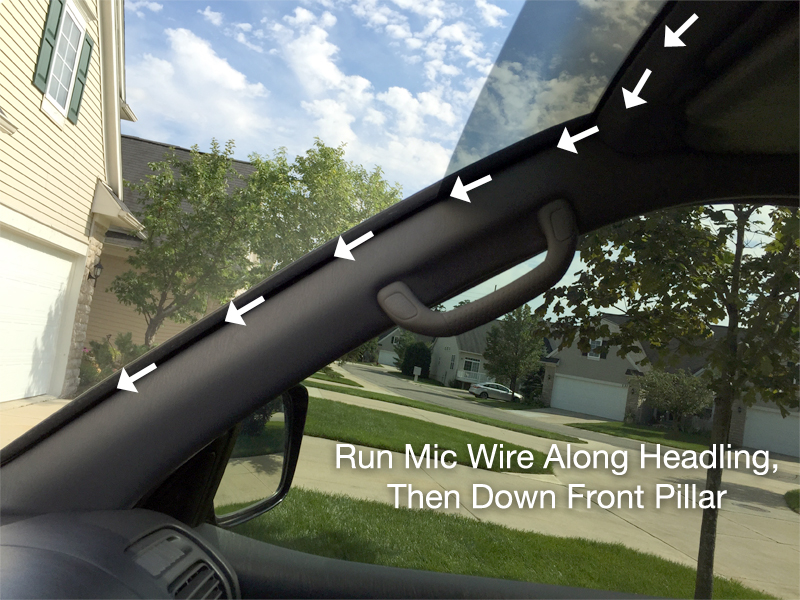 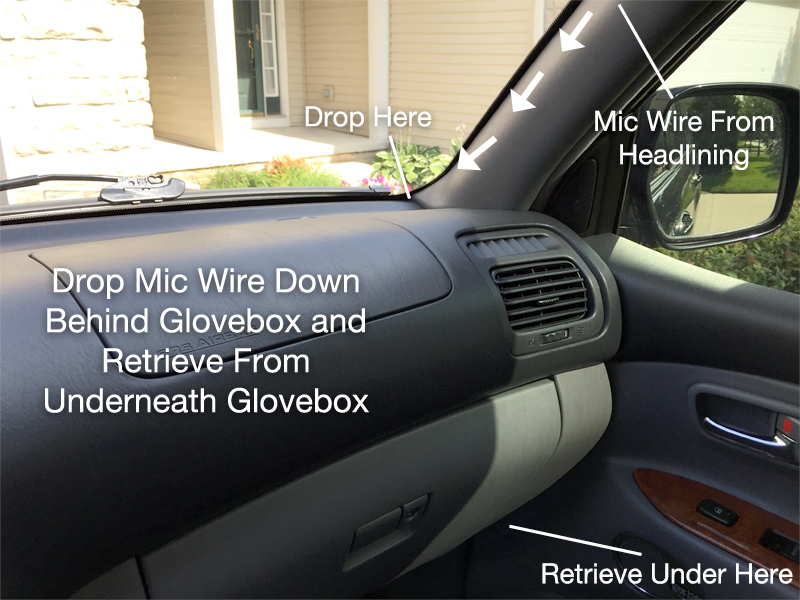 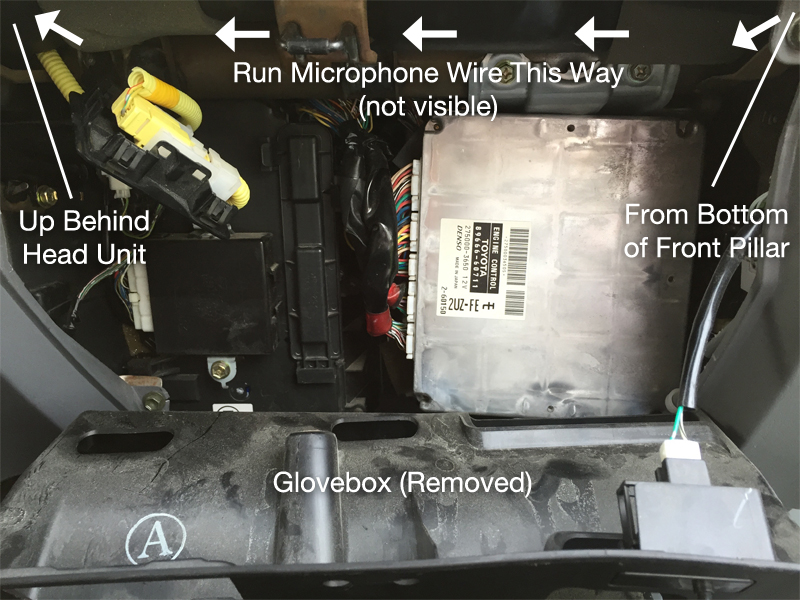 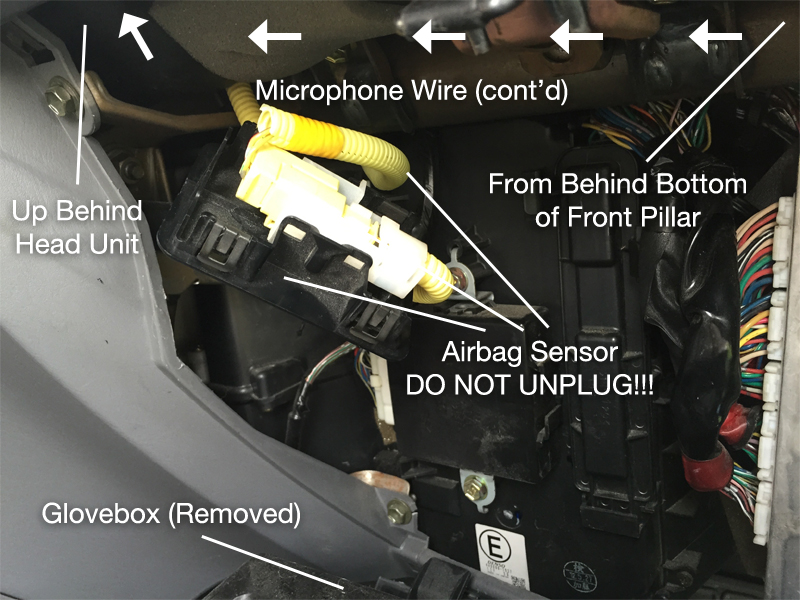 12) Connect the 3.5mm jack end of the mic wire to the Bluetooth module.

13) IMPORTANT — DIP Switch setting on Bluetooth module. Per the instructions that came with the Bluetooth module, set the DIP switches accordingly. I honestly can’t remember how I set mine, I should have written it down, but be sure to test the unit before you go any further to make sure it works as it’s supposed to so you don’t have to tear the front apart again. The Bluetooth system should function when you change the audio source to CD (you may have to press CD twice, as you’re adding an input to the CD input, especially if you also have iPod integration like me).

14) Once you get the Bluetooth module to operate normally, fasten it in place to your liking so it doesn’t rattle while driving. I zip-tied mine using what felt and looked like metal structural supports for the dashboard.
F

I just did the same exact mod to my wife's 2002 LX470 (but with the USA Spec BT45-TOY and CAS-LEX unit) and your write-up was perfect! One clarification to others that attempt this, you need to remove the small homelink trim panel to access the screw that holds the entire front dome light surround on.

Unfortunately we didn't do the exact same install. Because I installed USA Spec's iPod module as well, I used the CAS-LEX adapter for that, and then used the CAS-TLC for the BT35.

When I first installed the BT35, I could get it to function properly as far as interrupting whatever source and auto-switching to the Bluetooth (even my ringtone would play through the speakers). However, I didn't get the unit for music. The only time I ever tried using it for music (just to test) I didn't get the track info though. It did show the phone number calling on the screen though. This was all back in July of 2015.

Then, in September, I'm pretty sure my BT35 stopped working when the new iPhone update rolled out (iOS 9). It will interrupt my source when there's an incoming call, but there's no volume. If I try to call out, I experience the same thing (person on other end can't hear me and I can't hear them). I'm guessing it has to do with needing to rearrange my DIP switch settings, or at least that's what I'm going to try next whenever I have the time to take apart the dash again.

You might want to try messing with the DIP switch settings when you have the time. take a look at your manual and double check the notes (if any) it has for our vehicle year and model. Otherwise, it might be worth trying the CAS-TLC.

Let me know if you have any other questions.

I have a 2002 LX470 and considering this same series of mods. Did you lose the CD functionality, or can you listen to either your iPod or CD changer?

So how does this work if you have a CD Changer, iPod module, and Bluetooth module? Your iPod will occupy the CD1 source and your Bluetooth will take the CD2 source. Assuming you use the Bluetooth module strictly for phone use like me, whenever you're not making or receiving a call via Bluetooth, the source it uses will be free, thus you may be able to listen to CD's in the CD Changer. I have not actually tried this though since installing the iPod and Bluetooth Modules. For the record, I installed the iPod module first using the USA Spec PA15 unit with the CAS-LEX adapter.

Don't quote me 100% on how all of this works though. This is just my basic level interpretation of how this can all function based on the two manuals from the iPod and Bluetooth modules. Please keep in mind, I believe my Bluetooth stopped working sometime around when Apple released iOS 9 in late September of 2015. I use an iPhone 6. Again, I have not tried to remedy my Bluetooth situation yet, and don't know when I'll be able to, but will post an update when I do.

Thanks. Frustrating what the changes to the iPhone's iOS can mean to ancillary products. I am using a Windows Phone and that's another layer of frustration. If you determine that the CD changer remains functional with the iPod module installed, please let us know. I want to retain use of CD, as from a sound quality POV, CDs are better than compressed iPod music, and the ML stereo is good enough to hear the difference.
S

I just bought an 04 lx and the bt-45 unit and can't seem to find a write up on the install. Does the bt-45 unit need any extra wires? I've heard conflicting answers

Unfortunately I can't speak to the wiring required for the bt-45 unit, and I can't tell from Crutchfield (where I got my bt-35) that you need an adapter.

It might be worth contacting USA Spec about the bt-45. I contacted them with a question regarding whether it was possible to install both their pa-15 (ipod module) and bt-35 units and they replied pretty quickly from what I can remember.

My Bluetooth functionality has returned. I think my issue was that I had my phone's audio source selected as BT-35 (Bluetooth) and the volume for this source was turned almost all the way down, something I need to do when using my Jabra Bluetooth headset. Once I turned the Bluetooth source volume up while in the car, it worked like it's supposed to for both phone functionality and music streaming.
T

great post. i have an extra BT45-TOY new in box if anyone is looking for one. have it posted in the classifieds.
S

Thanks guys, got mine installed yesterday and so far so good

I'm strongly considering adding this BT unit to my NAV equipped 2002 Cruiser. Can anyone confirm the use of the CD/DVD player with this installed? We use the "DVD mod" for the NAV screen pretty much anytime the kid is inside.

Followed the write up above, fairly straightforward. Only difference is I decided to pull the A-pillar trim and fully tuck the wire inside. For me the settings on the DIP switch ended up being

To get everything working properly.
Also my mic looks different than the one picd above, mines the larger visor clip version - removed it from the clip and sticky taped the flat base in the same spot. Looks fine but not as clean as the "bump" version of mic (maybe just the early model). Don't see why you cannot swap the mid for any other using a 3.5mm jack.
Overall very happy, everything works and I now have BT calls and BT music like a modern vehicle

trizzo said:
great post. i have an extra BT45-TOY new in box if anyone is looking for one. have it posted in the classifieds.
Click to expand...

One of the nicest step by step write ups I have seen.

highonpottery said:
I'm strongly considering adding this BT unit to my NAV equipped 2002 Cruiser. Can anyone confirm the use of the CD/DVD player with this installed? We use the "DVD mod" for the NAV screen pretty much anytime the kid is inside.
Click to expand...

More details on the dvd mod?

Here's the first reference I found real quick, there are others here on Mud: Navigation system hacks
Since the stock config limits DVD play to when parked, you have to cut and ground the wires coming from the park brake and speed sensor. Now you (I mean your passengers

) can watch DVDs while vehicle is in motion.

Edit: so now with the BT device - when you start up the vehicle it will connect to BT first. A push of the DISC button will switch it over to the DVD/CD changer. To go back to BT push button again. Confirmed calls will override a playing DVD so you can answer your call.

Such a nice write up.
You need to get hired by a company as their Technical Writer.

Recently purchased the BT45-TOY and I haven't been able to have Bluetooth audio track information show up. Everything else is working. Anyone else have that issue?
You must log in or register to reply here.

ARB front bar install: to/through where does it bolt?

ARB front bar install: to/through where does it bolt?