Finally replaced the brake booster assembly on my daughter's lx470. When I gave her the car at 212k I warned her that it would die a sudden death one day, and that day finally came at 2697xx miles. It's a 1999, and honestly, I think that's pretty good run for an OEM part. I had the booster motor die on my 2004 gx470 at about 240k and opted to just replace the motor and pump and re-use the rest of the assembly, but on my kid's car, I told her if she bought the whole assembly, I would replace it for her.
She ponied up the 1200 or so and got a new OEM assembly so I installed it for her yesterday.
I don't post much, but this forum has great info and great people, and the job was actually quite easy with help from this forum and other resources.
I did not take apart anything in or under the dash as some suggest, I just used extensions and u-joints to get the 4 firewall bolts with a little body contortion to get under the dash and around the steering column. It was a good excuse to change all the brake fluid as well and inspect everything.

I hate how these things go from "working fine" to "no brakes at all" in just a few moments.
On the GX, I had a trailer hooked up (empty thankfully) and was a mile from home when the pump motor died and I limped it home pretty easily. Both times the ABS light came on, but at that point, you only have a handful of pedal actuations to realize that your brakes will be totally gone in a moment.
My daughter was leaving for work on a side street when she lost brakes and being as she has a mechanic dad, she immediately e-braked it and called me. I had her tap on the brake motor a few times, as I figured it stopped on a dead spot on the commutator and sure enough, and it spun up pressure in the accumulator and she was able to get home and then drive it carefully without incident to our home shop.
Yes, I had my daughter driving a 23 year old car with a worn brake booster, so maybe that's not super responsible of me as a father, but overall, her truck is incredibly reliable and she has driven it across the country multiple times without a hitch. It's gotten her out of muddy fields at flooded music festivals in the middle of nowhere she camped in it for a summer, and if she gets in a wreck, God forbid, I think that the truck will protect her better than most more-modern automobiles. And, she loves it (despite the fuel economy).
I dont know if there is anyone on this board who rebuilds these units who might want the old one? I'm sure it needs a booster motor but otherwise it was functioning fine and didn't leak or have other issues.
If anybody has interest, or knows of anyone who might, please lemme know. I'm sure it's a good rebuild core and I hate to relegate it to the trash.
I'm in NE Kansas for local pickup, or if someone wants it shipped, and will put it to good use and pay for shipping (it's heavy) please reply. 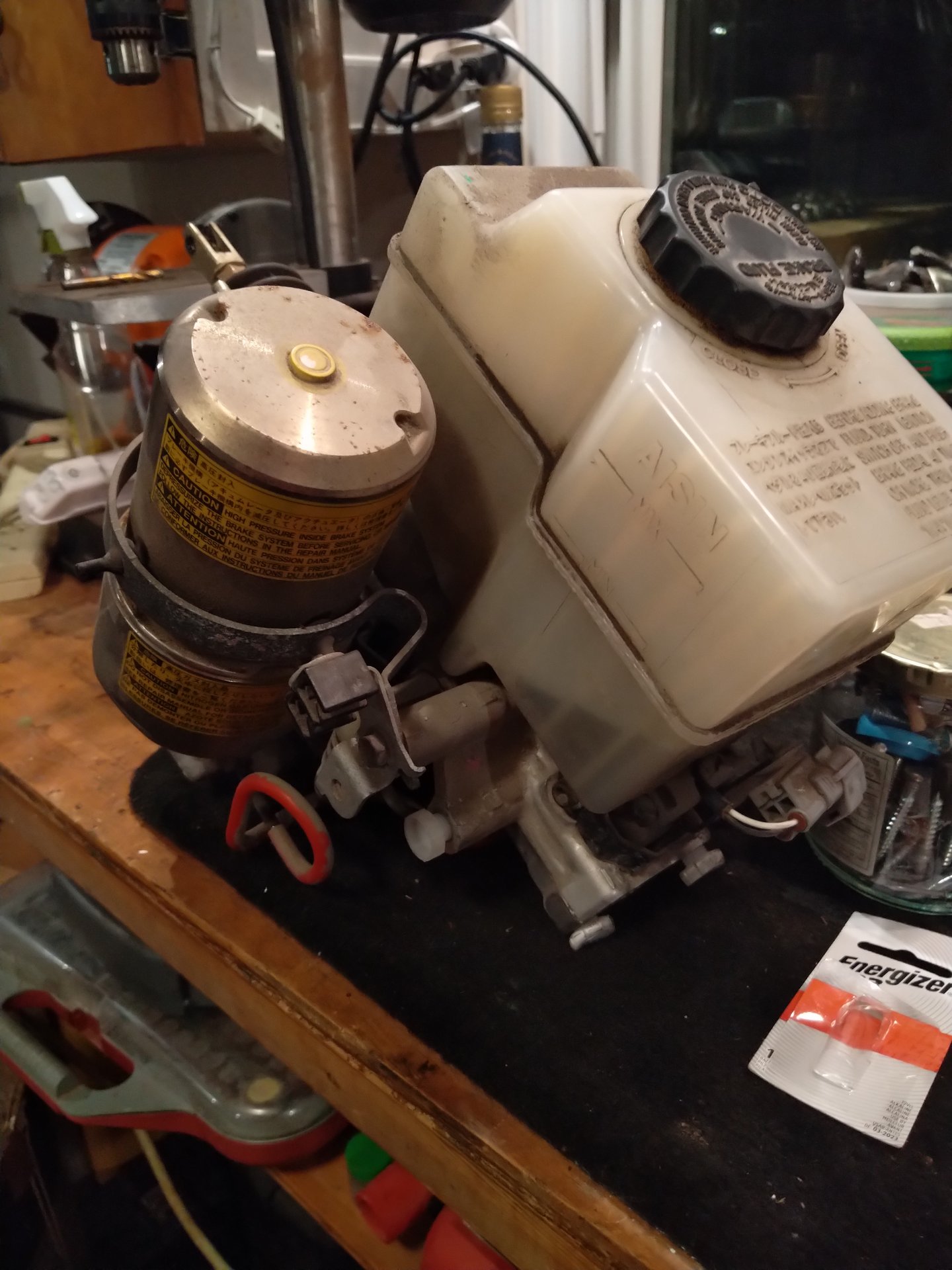 Thanks for thinking of me. But no, I do not want any more used brake master.
Master thread, with index to many helpful links.

did you use Techstream to do the brake bleeding?
3

I would do on occasion use a rebuilt booster motor

Personal, I would not use a rebuilt master. You'll likely end up replacing again, within 2 years.
Master thread, with index to many helpful links.

2001LC said:
I would do on occasion use a rebuilt booster motor

Personal, I would not use a rebuilt master. You'll likely end up replacing again, within 2 years.
Click to expand...

Bisho said:
With almost 300k miles, I'm planning on rebuilding my motor and master cylinder at some point before it gives up on its own. Why do you say a rebuilt master will give up in two years? Toyota does sell the rebuild kit.
Click to expand...

The master cylinder can be rebuilt with Toyota’s kit, but I think @2001LC is referring to the entire booster assembly. I would not waste money on a rebuilt booster assembly either. Sure, rebuild the motor and master cylinder, but understand that the booster likely will fail internally and it cannot be rebuilt despite what Andy Le claims.
2000 UZJ100
1994 FZJ80
1990 4Runner
1989 Pickup
1985 FJ60
1973 FJ40

The booster motor can be rebuilt. We can also replace the master plunger, which has seals included on it.

But to my knowledge, no one has replaced the seal in the front of the master. Looking at the master standing at front of vehicle. You'll see a roundish area/cap at very front of master cylinder. The factory locks in this cap, with a crimps/punch. It is not meant to be removed. Nor does Toyota sell this seal assembly behind the cap. If brake fluid is not flushed often, all seals becomes damaged. A clue to seal health, is color of brake fluid in reservoir. If once master flushed (including accumulator) fluid turns dark rapidly (6 mo or less) and how dark, are clues to seal health. A stained reservoir is a very bad sign/clue.

What I do is grade the master. Number one is condition of fluid and reservoir, which the re-builders clean so we've no clues. What I've found is when we replace booster assembly or just booster motor or even just replace a corroded brake control wire. We increase motor/pump speed. Booster assembly now produce more pressure. The increase in pressure, which is back to factory new or near it, then non replaceable seal leaks/fails within 2 years. Then we get the "screaming banshee" (someone coined the sound). What this sound is: IMHO, is brake fluid under high pressure passing the front non replaceable seal. When this happens, system pressure drops and booster motor come on/runs to bring pressure back up. Over time the seal weakens more and more with each leak event, marked by screaming banshee. Pump motor runs longer and longer, too long and will wear out motor prematurely. If motor fails to run when pressure drops, we have no brakes!

Which brake fluid used in system, may also play a big parts in seal failure. There was a recall for 2005 -2006 brake masters, in some (not LC or LX) Toyota's/Lexus. Toyota sighted: off the shelve non Toyota brake fluid being added to reservoir, causing seal failure. To this end and out-of-abundance of caution, I now only use Toyota brake fluid. Not even Toyota/Lexus shops use their Toyota bottled fluid. They use cheap bulk or run special like BG supper dry brake fluid. Interestingly: my people in wholesale parts tell me "They're see a very high number of brake master ordered, over last few years". Hummm.. 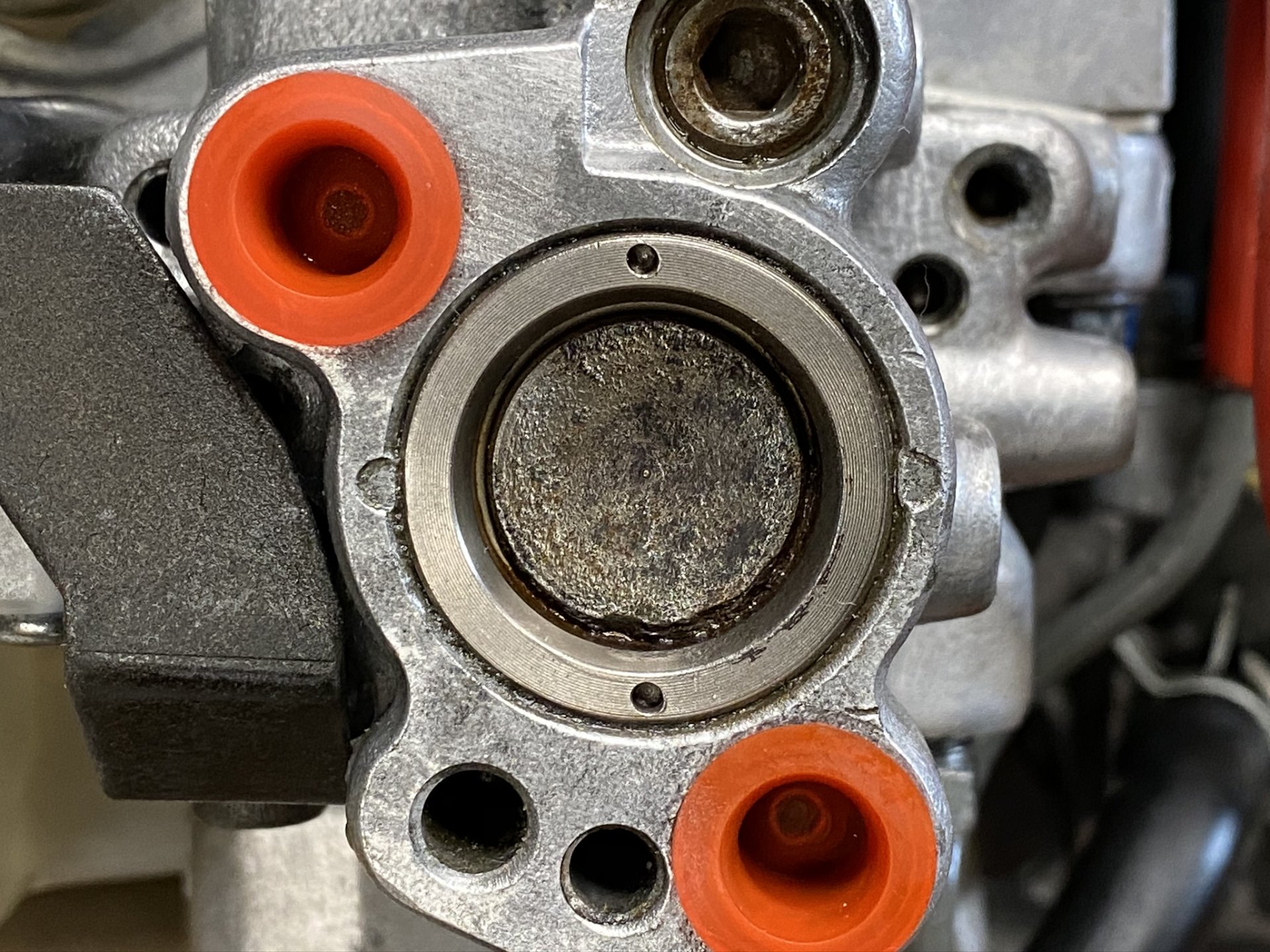 Front seal behind cap in front area of master cylinder. 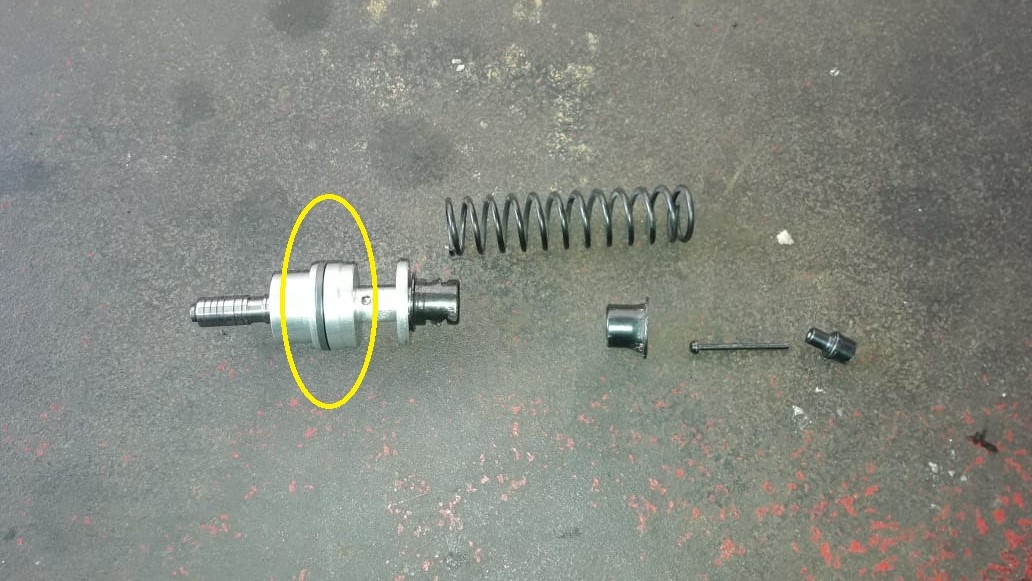 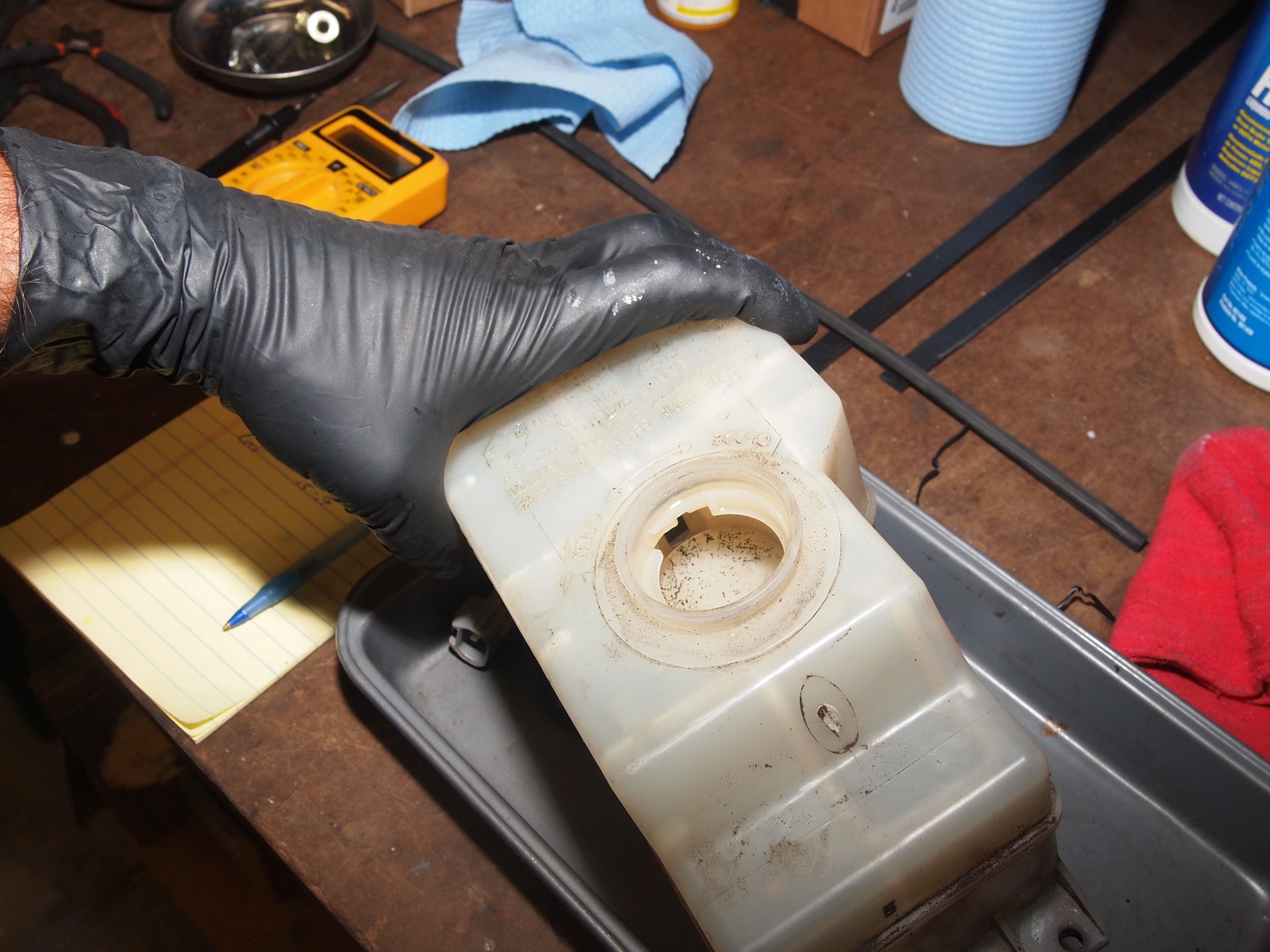 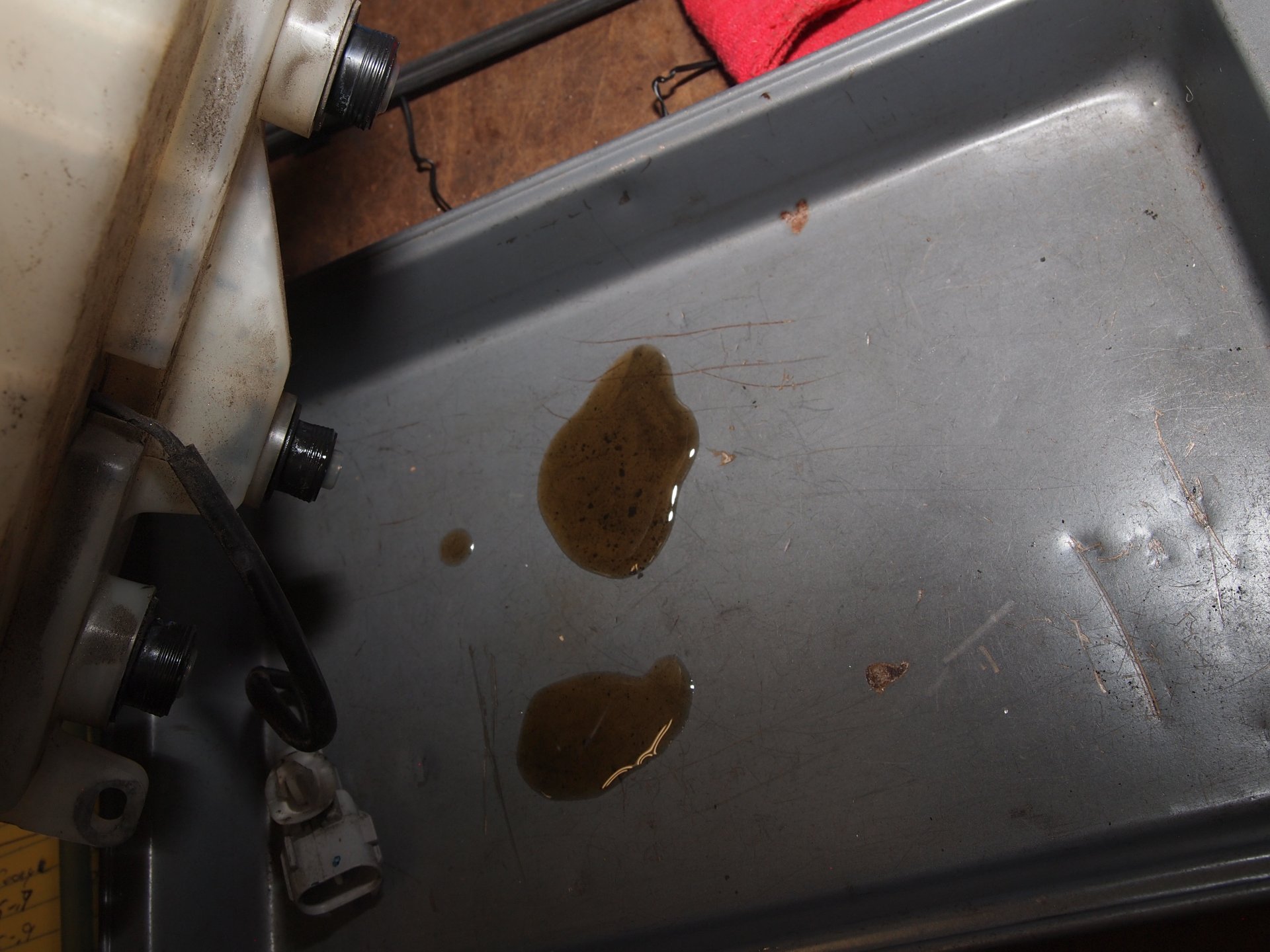 Additionally this gunk from bad fluid gets into ABS unit (black box on side of master). This can clog ABS valves. I just had one cause a single caliper to lock the brake on (no fun) and would not release. Inside the ABS black box, I found gunk and clogged screens. 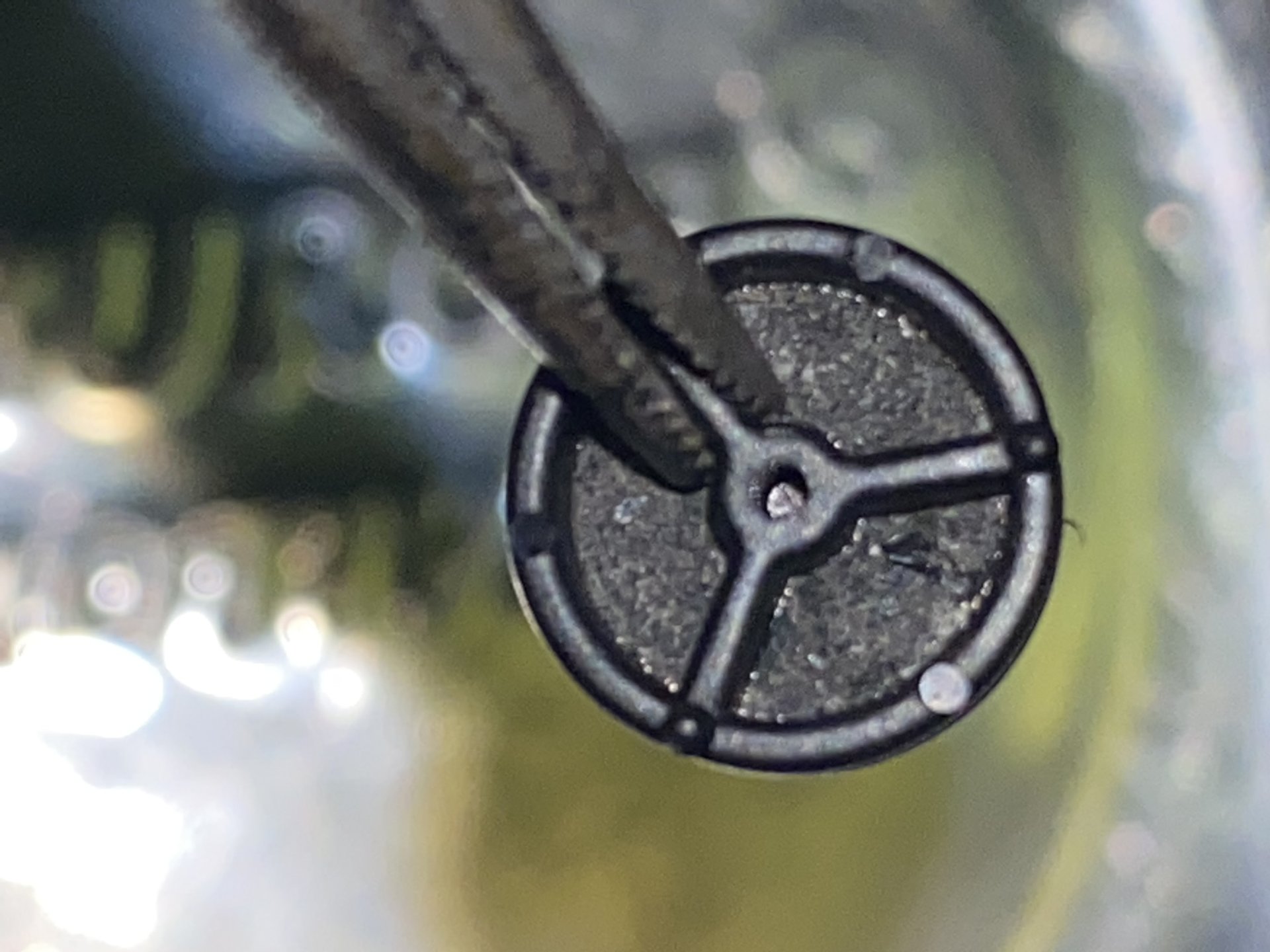 Master thread, with index to many helpful links.