Anyone wheeling this weekend? Me and Brian (red double cab

) we’re planning on a wheeling trip to RC or Anthracite. Planning on camping Friday night possible Saturday night too and wheeling Sunday as well. Any interest?

Joe, Sunday is mothers day. And I am booked up Saturday too. Have fun.

Yeah I got some flack for Sunday, nothing really set in stone if it doesn’t happen no problem.

Looks like we will be wheeling Saturday at RC, thinking about spending the day at the ne property running blues if anyone’s interested. We will be camping Friday and Saturday nights

Still on the fence on this one. Trying to get away from work on Saturday and Sunday is a hard no from the wife.

Ill check back here if anyone’s is going we can confirm Friday night or something. Bring out the camo cruiser for sure!

Checking in .... fixed my work drama (or kind of ignoring it) ... I'm good to go for tomorrow if you guys are in. Just let me know for sure and what time.

Not sure what is happening, so not looking good for tomorrow. Will try to check in one more time before heading to bed.

Headed to bed. Going to sleep in tomorrow then. Will try to make sure I can make the June run.

Cass007 said:
Checking in .... fixed my work drama (or kind of ignoring it) ... I'm good to go for tomorrow if you guys are in. Just let me know for sure and what time.
Click to expand...

Got here late jj had a LAX game my cell is 609 334 4638 not waking up super early if you decide to meet us call in am figure hitting trails around 930 sorry for not checking earlier.

The weather sure is nice for a day of wheeling!!!!!

Sorry, it's been a busy few days. What a great day ... even at Rausch and those seem super rare. Good temps and some sun, plus it hadn't rained in maybe 3 whole days, so things were fairly dry. I met Joe and Brian and Joe's son JJ and we got sorted and headed to the NE property. I've only been to that side once before and we did mostly greens with Onur leading and some lightly modded rigs and it was wet that day and fairly slippery.

We headed in and went straight to check out Red Trail F since Joe knew a Jeep guy that had done it. Possibly passable, but would take a bunch of time and spotting, so Joe decided to pass and we headed to the Blue trails (bullet dodged). We basically did every Blue Trail on the top side of the map. We covered a ton of ground and Joe kept us moving from trail to trail.

Joe and Brian have similarly set up Tacomas with 2-3" lift and 35" tires. The trucks were super capable all day and no winching was needed. Lockers were used a few times and a few trails required some spotting over some of the taller rocks, but all in all a great day.

We stopped for lunch and JJ busted out his RC race truck and had some creek fun (pretty sure the truck is Joe's toy too) and saw a pair of Jeeps that were hunting the exit. They were the only people we saw all day. The park was practically empty.

After lunch we headed to the south side and did all the Blue Trails there except 38 A-B-C ... they had radical entry and exit angles that seemed more suited for buggies. Just before getting there we did a trail that ended with a steep decline down a narrow chute that both Brian and I slid down at full lock on the brakes. The NE side seems to be very much about elevation changes and a few trails reminded me of Jotter's Way on the main property.

My favorite part of the whole day was running a trail named Tip Top. It goes up a rocky incline and then opens to a rock outcropping that looks like something I've seen in pics of Moab. It was my first time getting to drive that kind of terrain and was very cool. We ended the day doing Area 51 (pretty sure we did that) and def did Jurassic Park before hitting trail 39 on the way to the exit. It was a full day, we started at 10am and finished just before 5pm. Joe seemed to like trails similar to Andy and Crusha ... lots of rocks.

It started raining just as I pulled out at 5:30pm and Joe, JJ and Brian got swamped at their camp as it rained all night after that. I have some pics and vids, mostly of Brian's truck since he was directly in front of me. 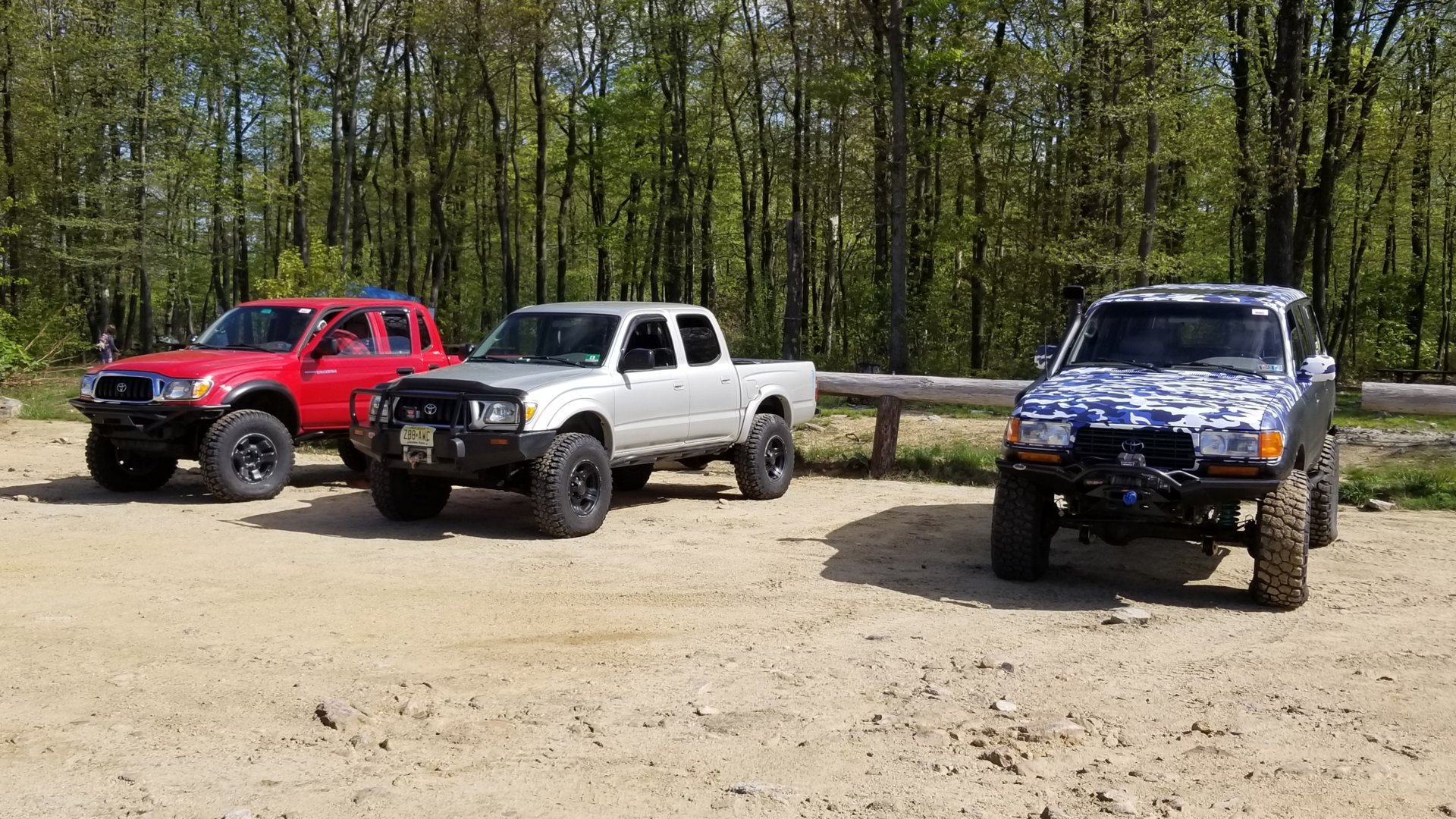 Just remembered that I was getting a loudish popping sound when articulating hard and was unable to pin down where it was coming from, but it happened fairly consistently throughout the day. I may have jacked up a U-joint tugging on my friends house with the truck. 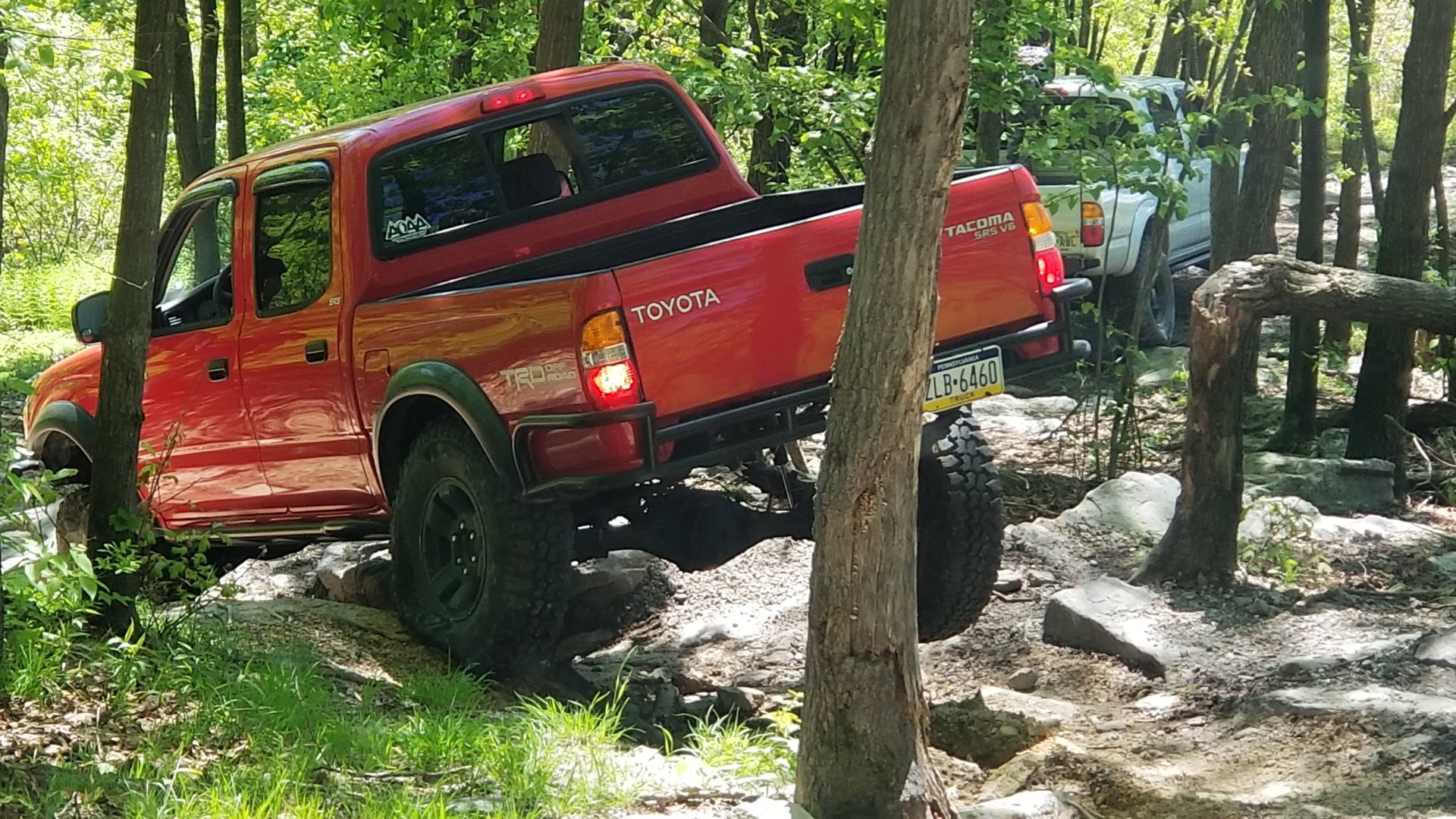 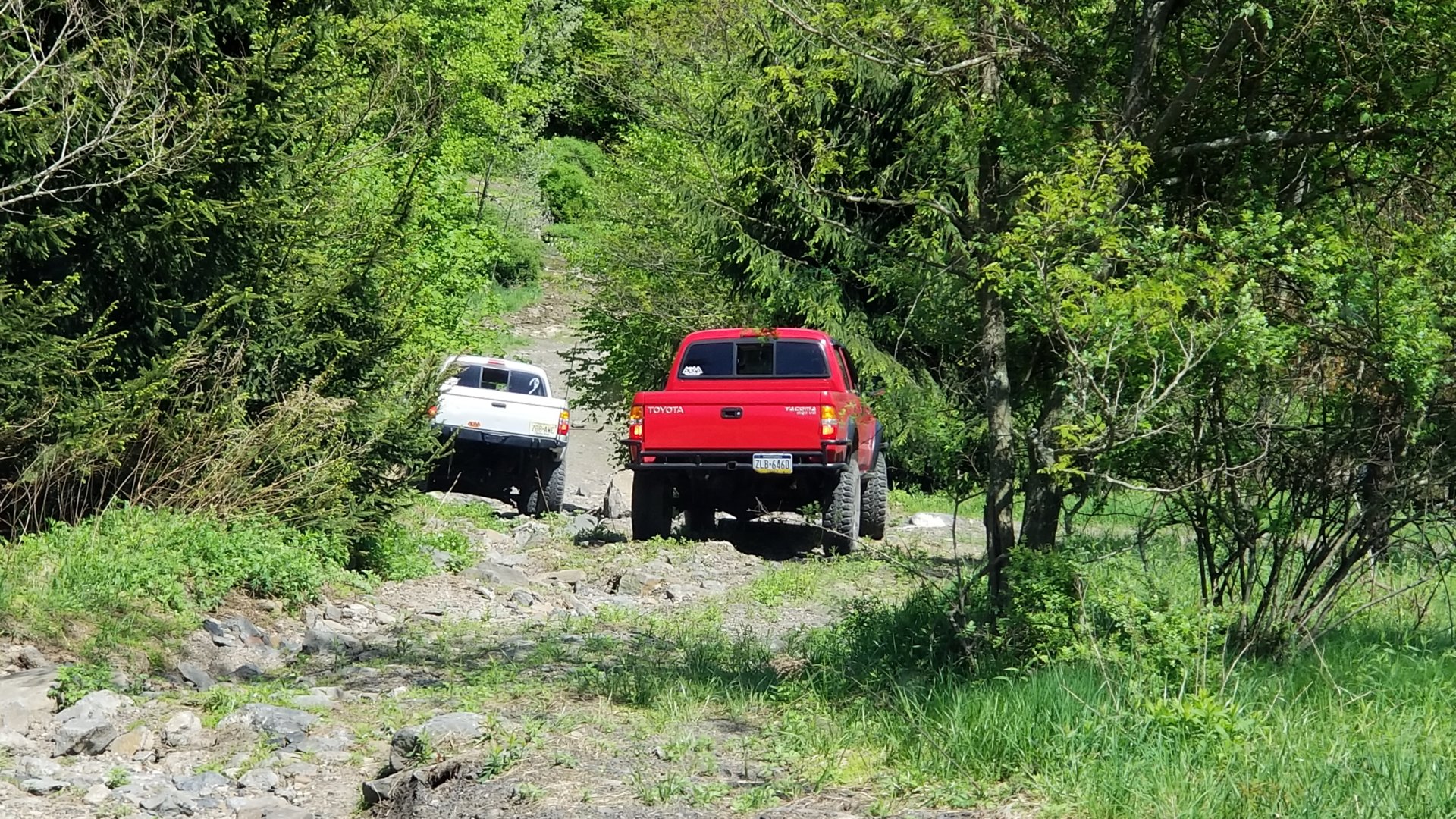 I'm pretty sure Joe was on 3 wheels here, but he settled before I could get the pic taken. 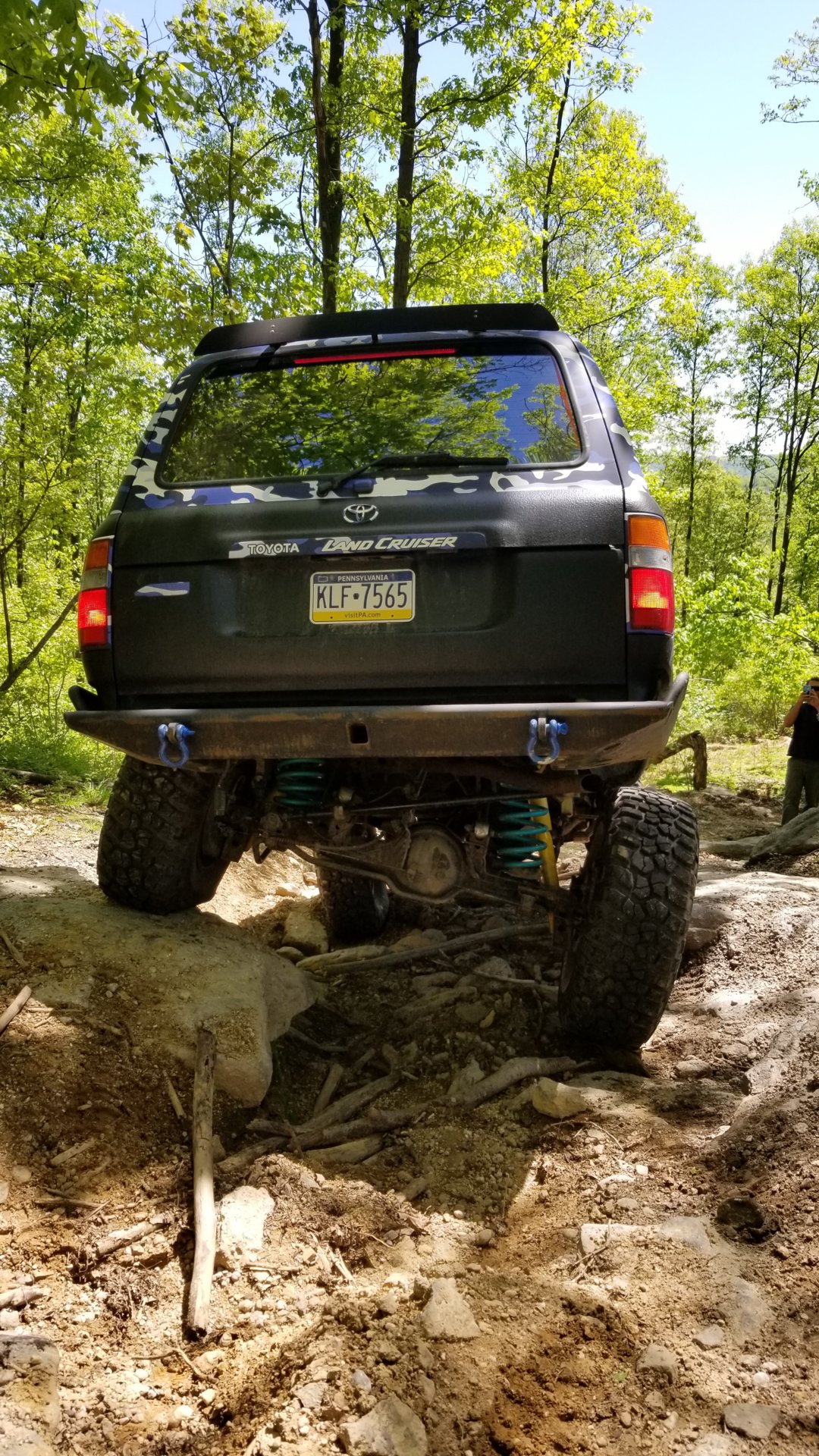 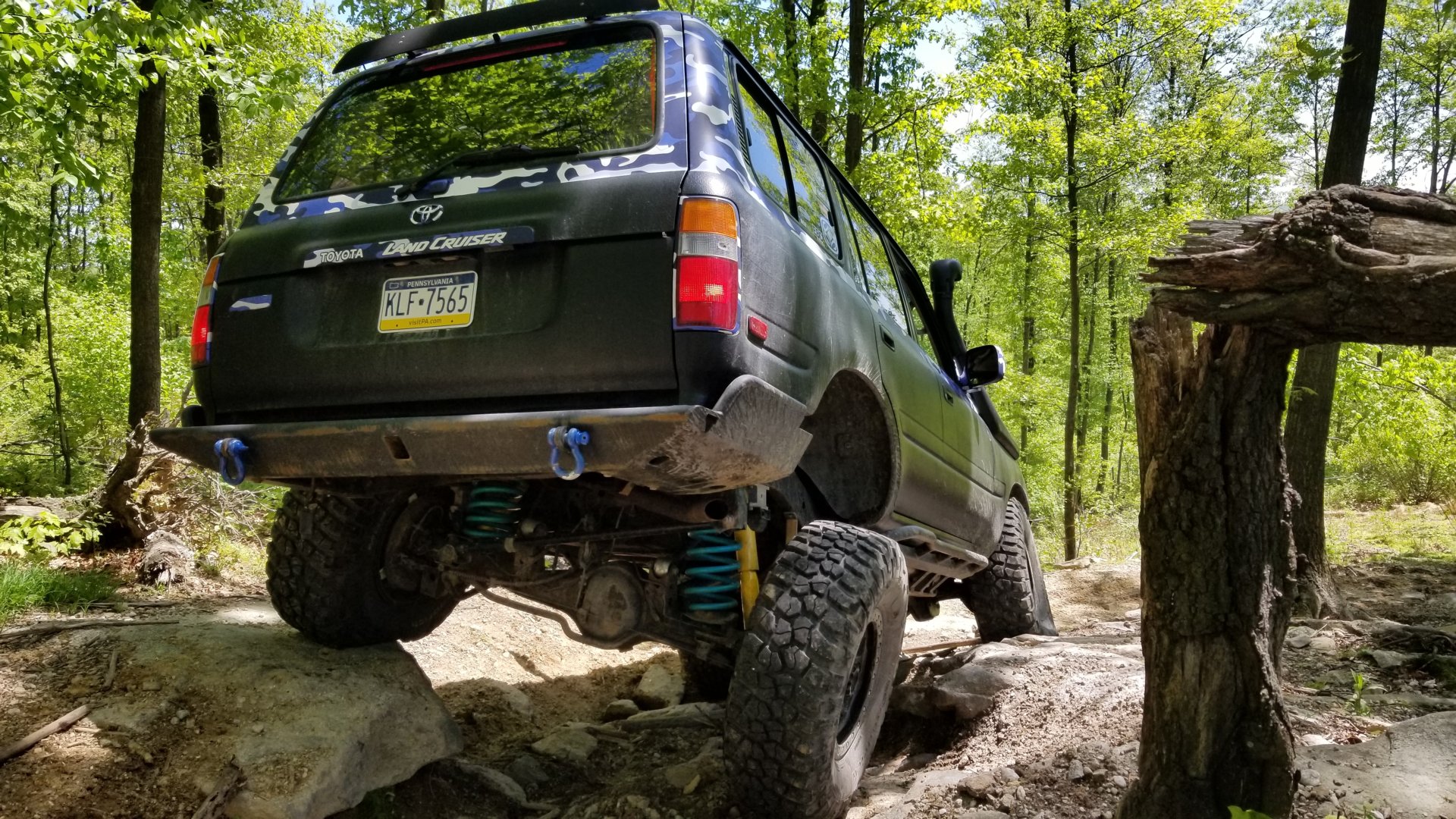 At one point we crossed a creek that had washed out pretty good and everyone kissed their rear bumpers because of the steep angle. Mine caught the shackle and made a loud high pitched *ping* that I had never heard before and I flashed back to Andy telling me that those are the kind of sounds that mean something just broke. I had a little panic before we stopped to check and I figured out where the sound came from ... just the shackle flopping hard against the bumper.

Poser shot ... all the cool kids were doing it, so I did too 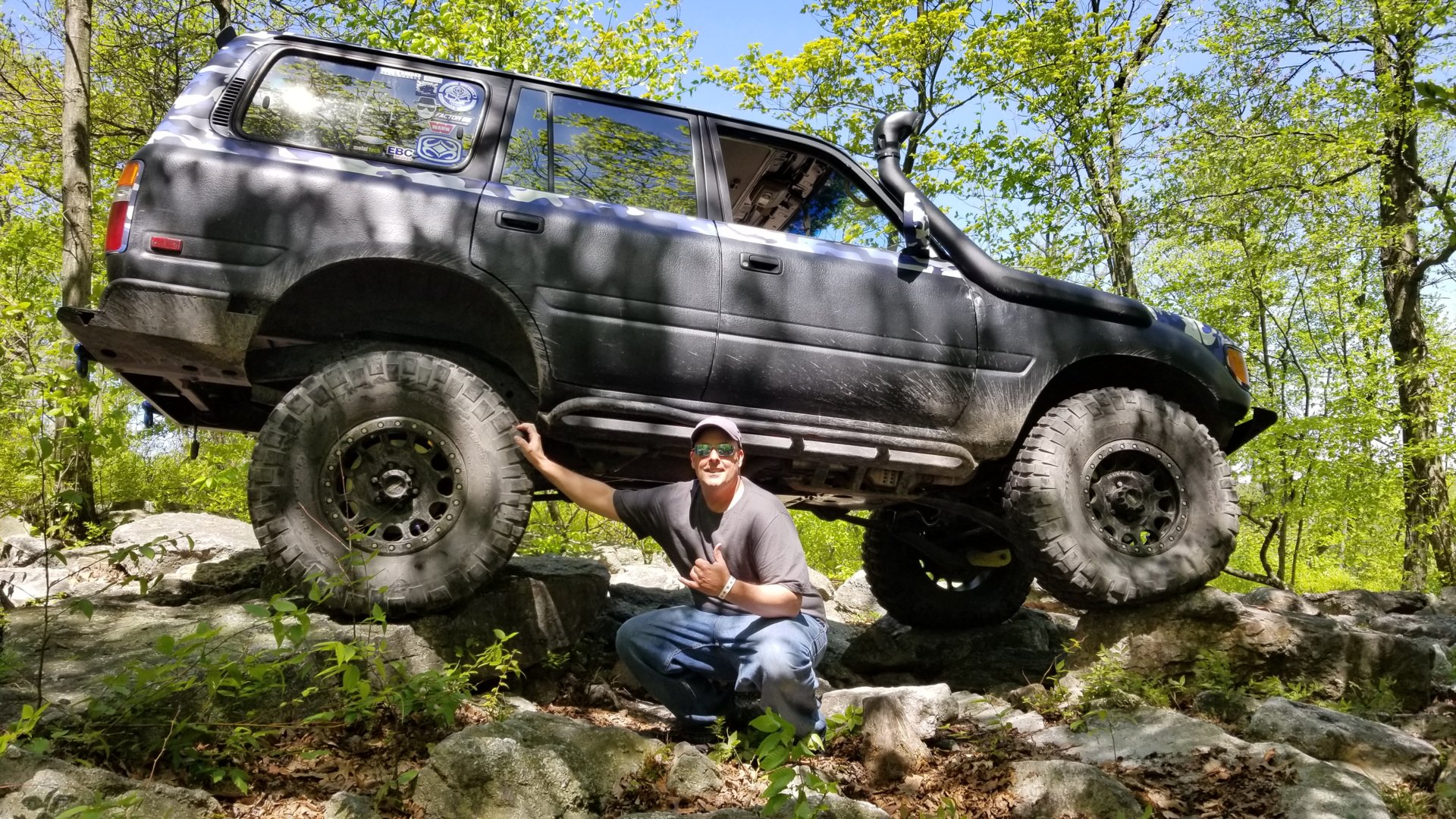 Joe in the mini mud pit we bumped into. It was just deep enough to bury his exhaust. You can hear it in the video.

Brian in the same spot
see below ...

That's all I have on my phone from the day. Great time and met two new friends to wheel with. It doesn't get much better than that.

Just got a few from Joe to post up 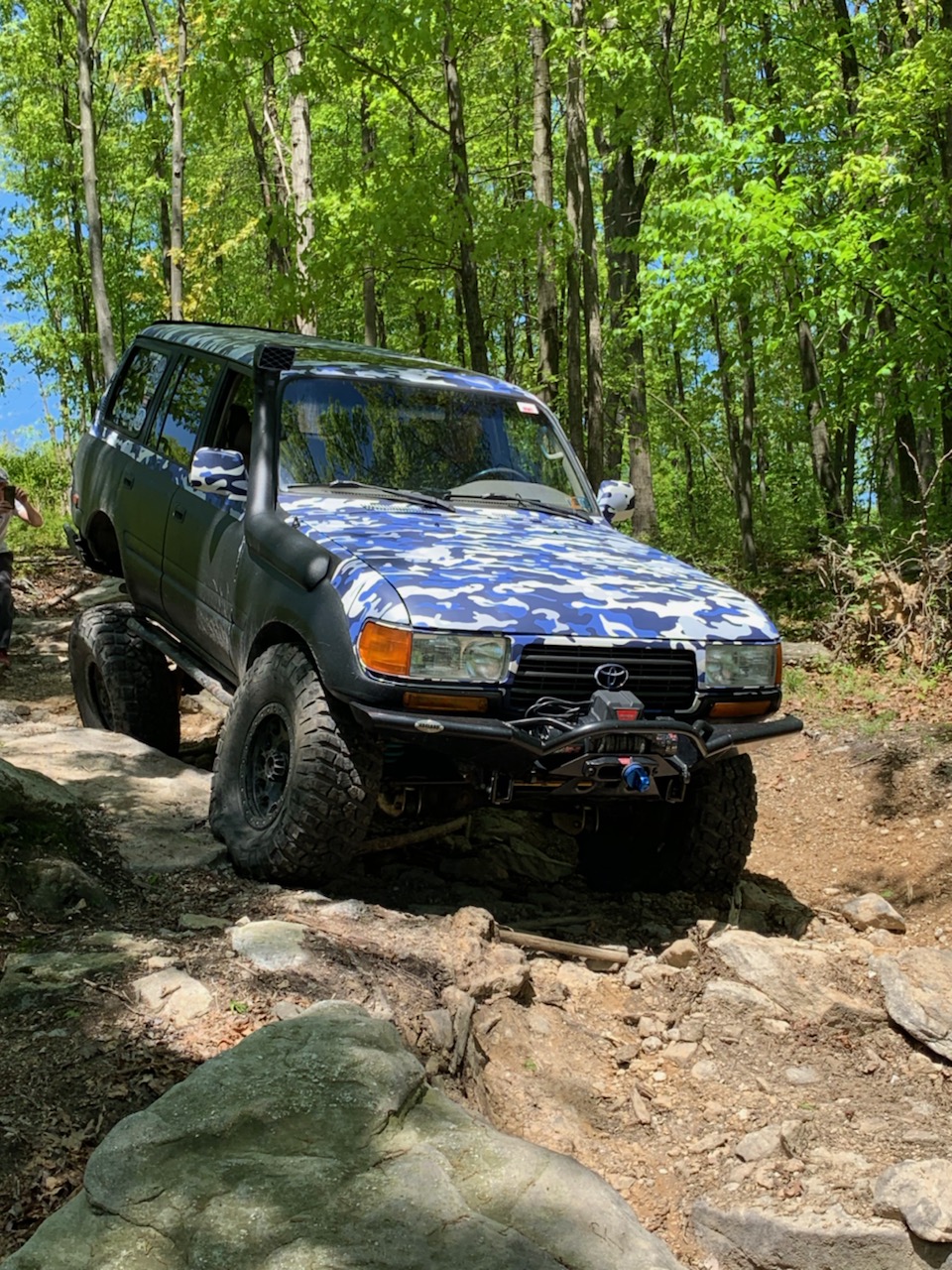 JJ getting in on the poser shots. This guy really seems to love the outdoors 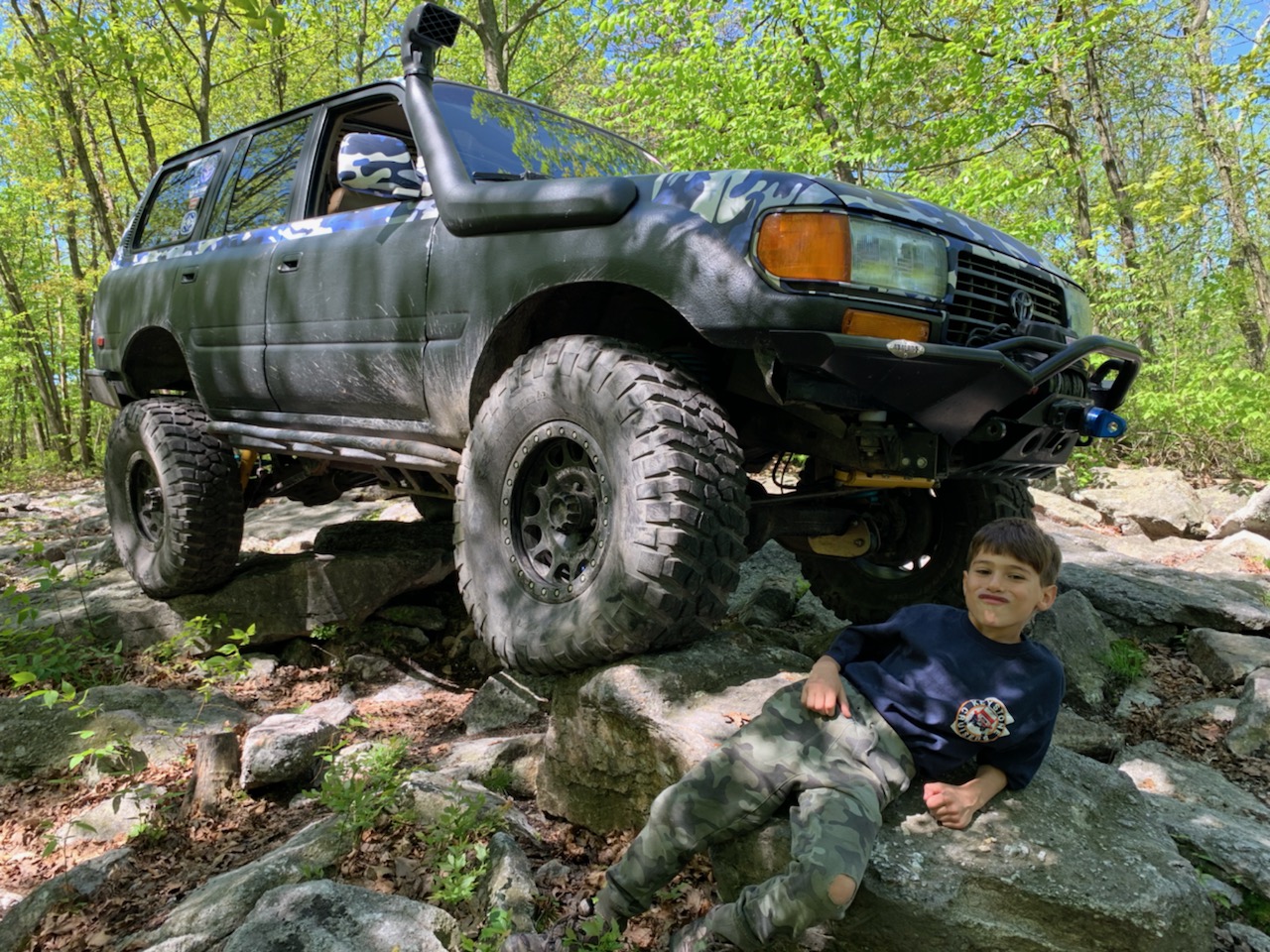 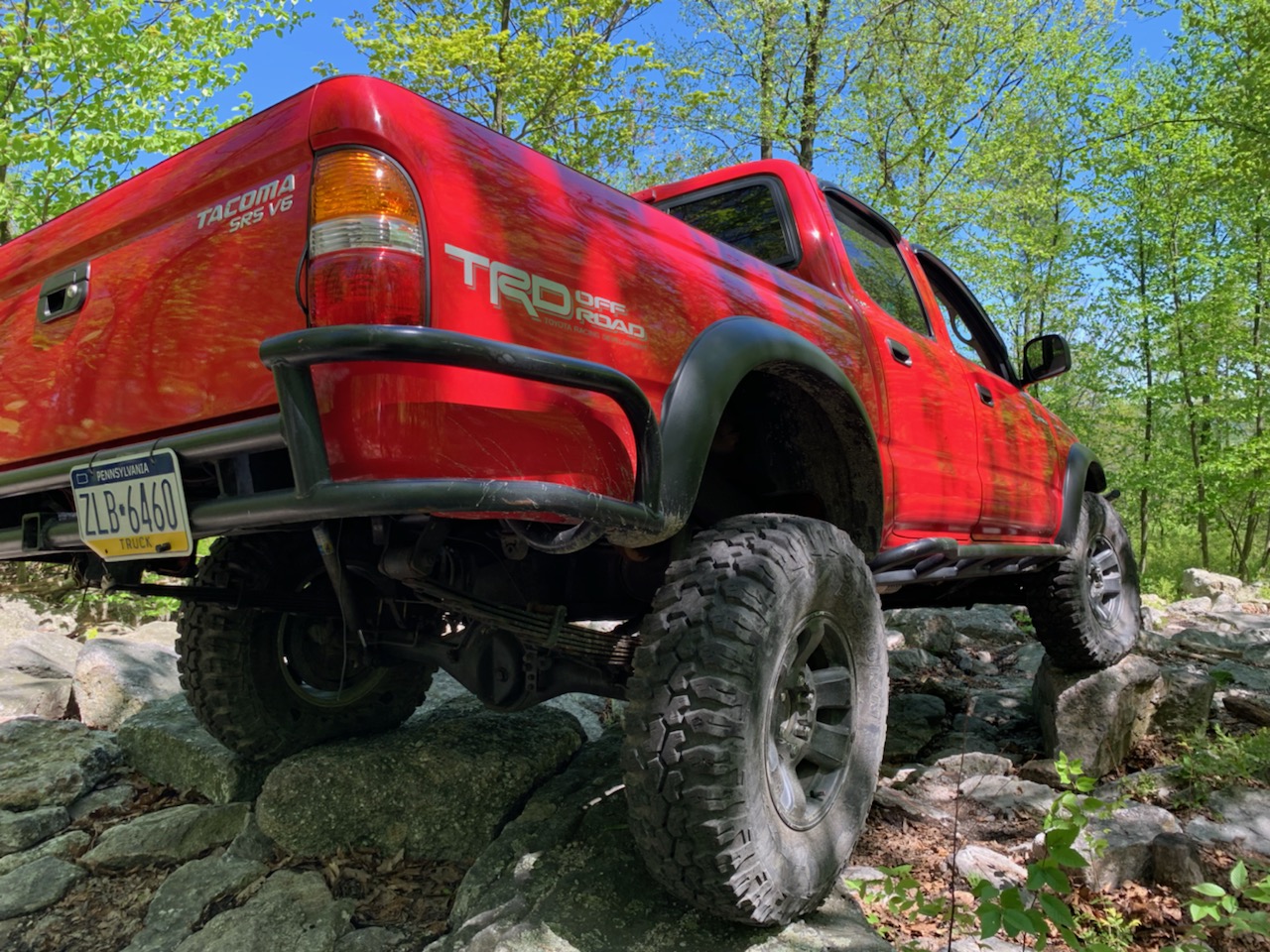 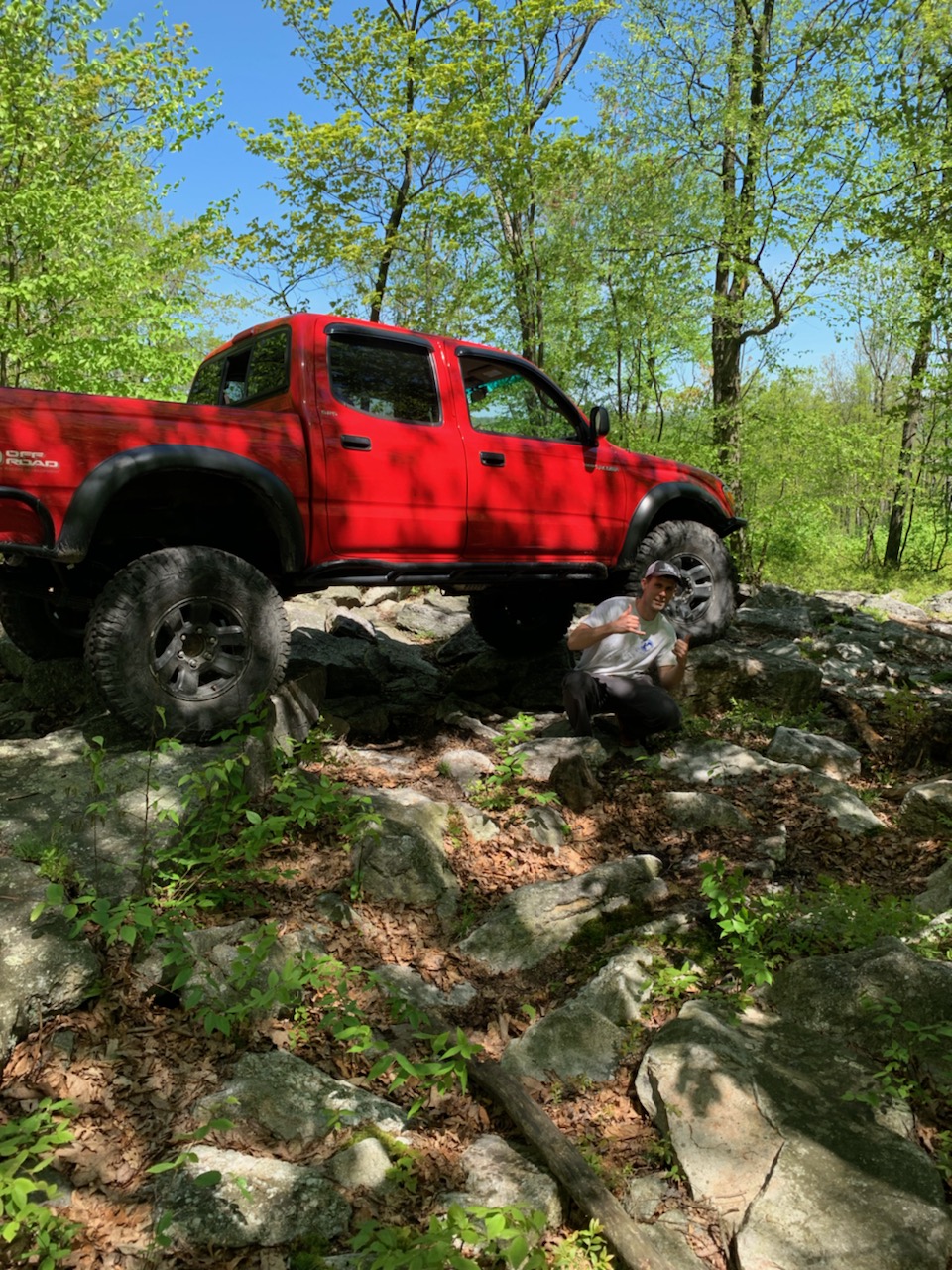 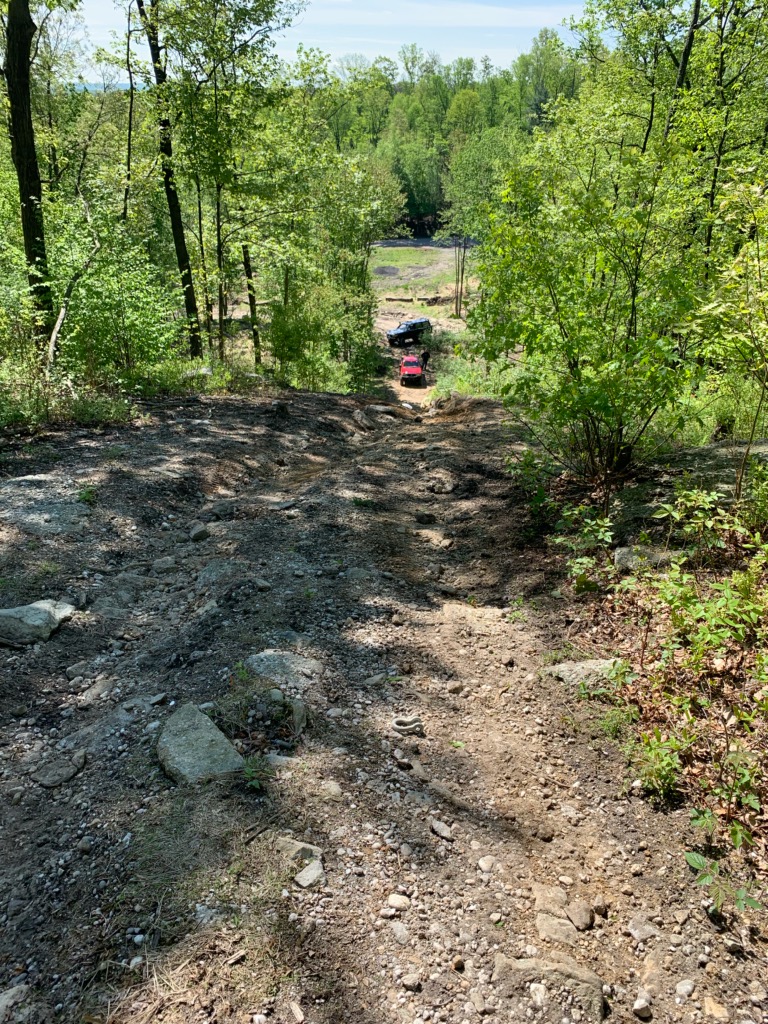 Great writeup, enjoyed the photos and vids. Thanks for posting! Sounds like it was an awesome day.

I'm glad there was an official club run on the scheduled date...we've only missed three or four runs in the past four and a half years!

Good wright up Chirs! @Cass007 I need to get more time over on the NE property. Up untill now it has just not been worth the extra money for it. Now you pay for it anyhow so you might as well go over there. But the trials that you did look like fun.

You would of been good on F there is a black bypass for the red section. We got Greg's @El Dahs taco through it with minimal trouble a few years ago. Its like the only trail over there that I know.