hello, so i pulled a trailer wiring harness from a 1997 land cruiser a while back. i have a 1994, im wondering if its still plug and play for a 1994? if its not, how would i wire it up? i have the whole harness with all the male and female plugs. thanks guys

Planning on leaving tomorrow morning, anybody have any thoughts on this?

I got the wiring diagrams.

I'm hooking up a 4 wire flat connector.
1 is ground and 1 is brake but the other 2 are signal. So which one does the tailight wire hook up too? 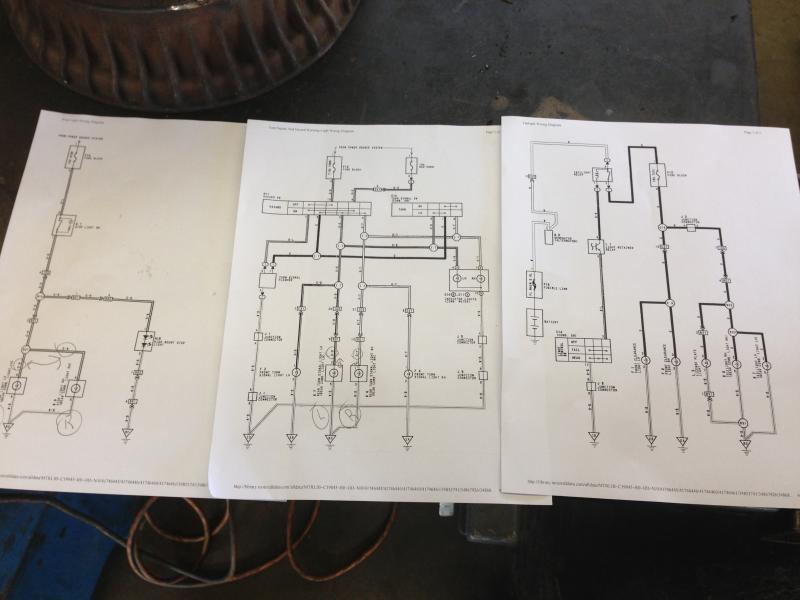 On a Toyota, you must use a converter to change the separate turn, brake & taillight signals into combined turn/brake/taillight signals. I don't know if the '97 harness will fit the '94. A quick look on etrailer.com says they are not compatible.

Otherwise you have to go with a universal one:
http://www.hopkinstowingsolutions.c...versal_kit_independent_bulb_turn_signals.html

On my '93, it had a Toyota converter spliced into the wiring behind the right rear panel in the cargo area. The Toyota converters are known to fail even if they've never been used. I had to replace my Toyota converter with a universal one & just used the original splices. If I was doing it from scratch, I would try the plug-in one, but you will probably have trouble finding one locally in stock. Walmart & most auto stores carry the universal ones for Toyota applications.
P

I would also pickup something like this, it makes testing easy:
http://www.hopkinstowingsolutions.com/products/accessories/flat-lite_4-wire_flat_led_dust_cover.html

I really appreciate the input fellas. From my understanding the 94's diddent have a plug and play system right? So if I get the hoppy 43405 it won't work even tho hoppy claims it will work?
P

Someone said they got one a Pep Boys so you might try there.

Ok I got it all connected, how do I know if the converter box is bad? I'm using a test light and i can only see the tailight working, but not the turn signals or brake light.
P

Either the box is bad, you have in connected wrong or you are not testing it right.

I would pickup something like this, it makes testing easy:
http://www.hopkinstowingsolutions.co...ust_cover.html

thank you everyone!! so i got it installed, it was easy plug and play. it turned out the converter box was bad. i bought a universal one at the trailer hitch shop. i destroyed the old converter box to pull out the connectors, i wired the new box to the original toyota connectors so i did not mess with any factory wiring and its still plug and play. everything works great, thanks alot fellas.
You must log in or register to reply here.

Wondering if the security system is keeping my 1994 Land Cruiser from firing?

E
What does this module control?