The Slee kit calls for a GP 35 battery. I understand it to be the same specs as a Gp 34 but the terminals are reversed , positive on the right side of the battery rather than on the left. How is this going to make a difference in the install?

I was thinking of swapping the batteries around ,but I got the truck with a brand new Toyota battery so I'll think about it when that battery dies.

About the terminal sides...
For one...the wired battery connectors on your main artery side won’t usually have enough wire to flip sides, and crossing isn’t a good idea anyway. Also...if you flip the battery instead, it usually means the terminal posts will be on the far edge...so reaching them across the battery will mean alterations or extensions too.
Slee...who you bought your trays from...can certainly offer you advice, and with their trays, you also have some different parameters you can work with since they include terminal extensions to reach more central posts on their originally-suggested type 31. I’d start there and ask. If you have a specific use style/need list that gets complicated post it...after checking out existing threads. Search using “dual battery” and limit it to the 200 section, and you’ll find a ton of info.
Last edited: Oct 14, 2019

I'm not flipping sides until my new starter battery dies and I'll make new cables and do so.

Unlike what I've been told before the GP35 is not the same as a Gp34 battery . The sizes are different.

My local Batteries Plus has an Gp35 X2 Power battery with a 60 month warranty.

I got the Slee trays in. The D/S tray was a straight forward install. Definitely a two person operation to get the bolts tightened up.

Th P/S tray was easy enough once I realized the tray is bolted down from the base to four captured nuts in the top of the fender . Not in the instructions. A hint in getting the P/S reservoir off the bracket is to remove it from the bracket before removing the bracket.

I routed the cables across the front of the radiator. Unlike my FJ60 , there were limited places to run the big thick cable but it was doable. I attached the cables to the new starting battery, a X2 Power GP35 dual purpose battery with military battery terminals .

Once I saw I could do this without cutting the factory battery cables this was an easy job that took about an hour.

Next is to wire up the National Luna dual battery system. First I would like to determine where I'm going to put the battery monitor gauge so I can figure out how to route the wire. 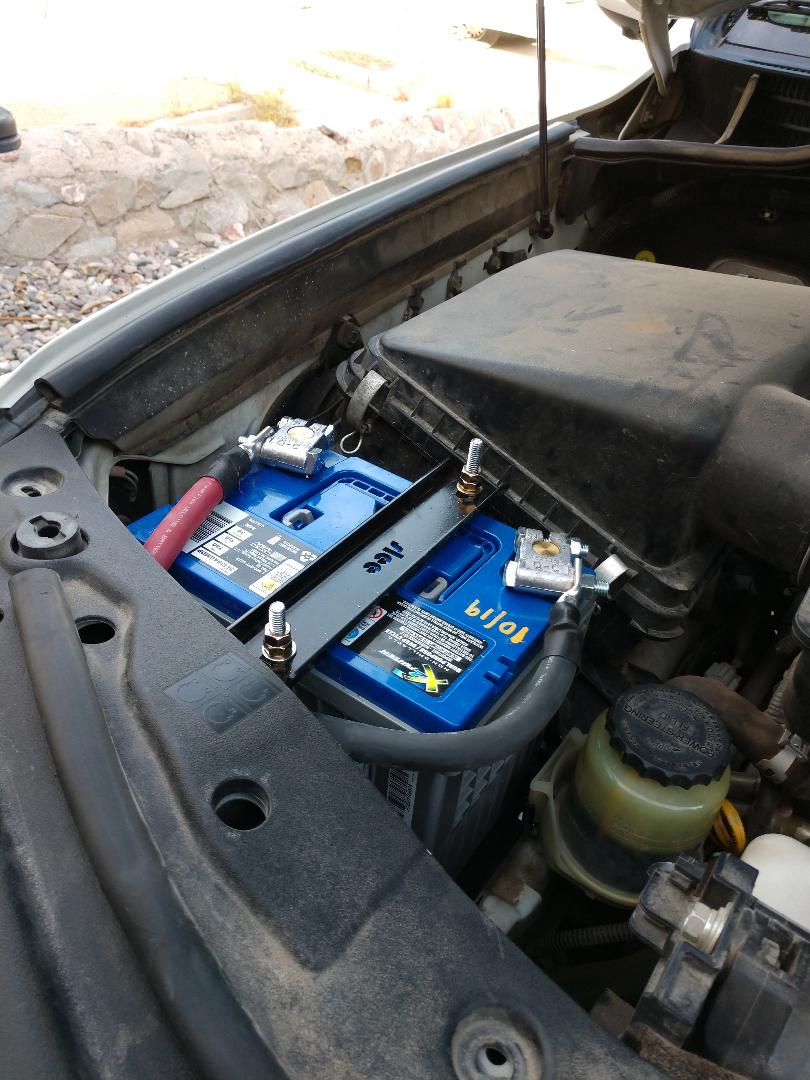 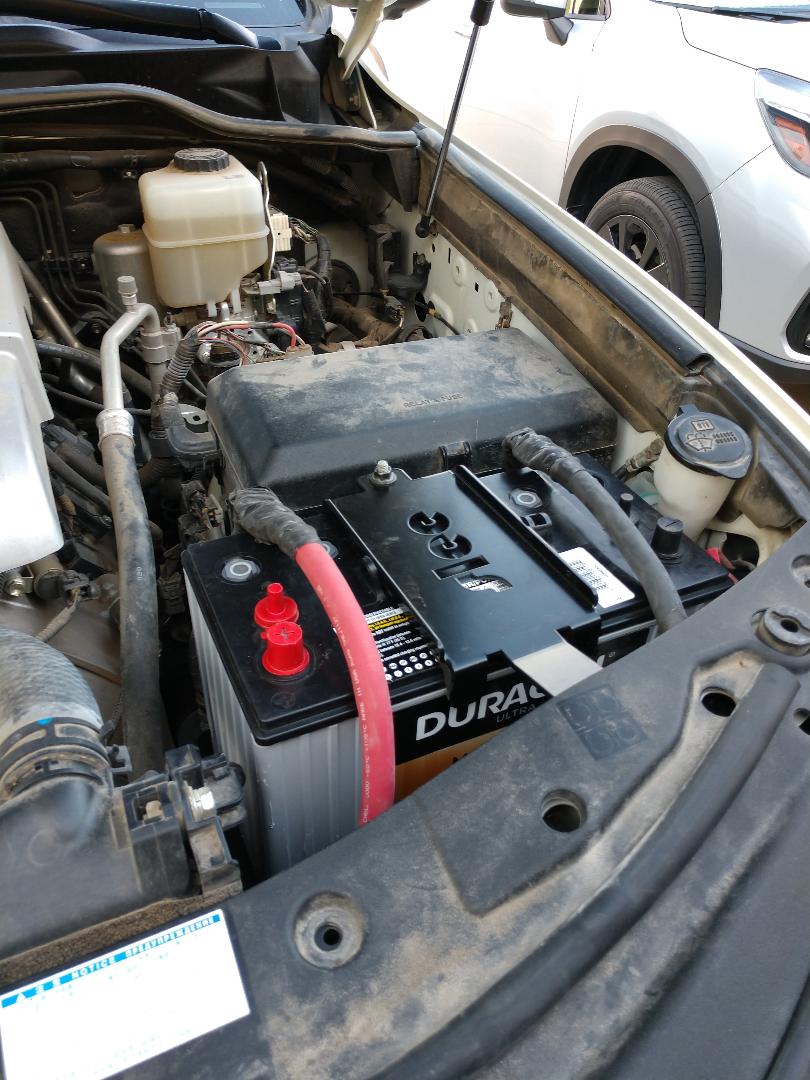 I wired up the National Luna solenoid and added a circuit breaker and aux fuse block.

Next up is to run some wires through the firewall for the battery gauge , rear fridge and other circuits. 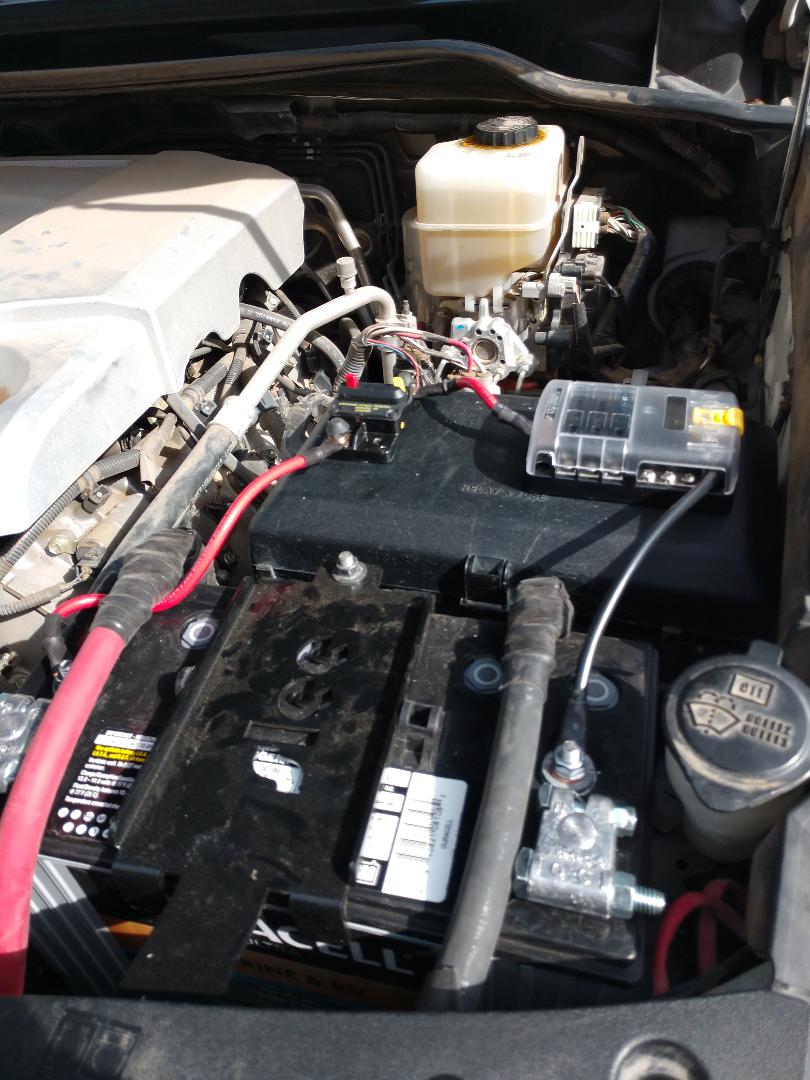 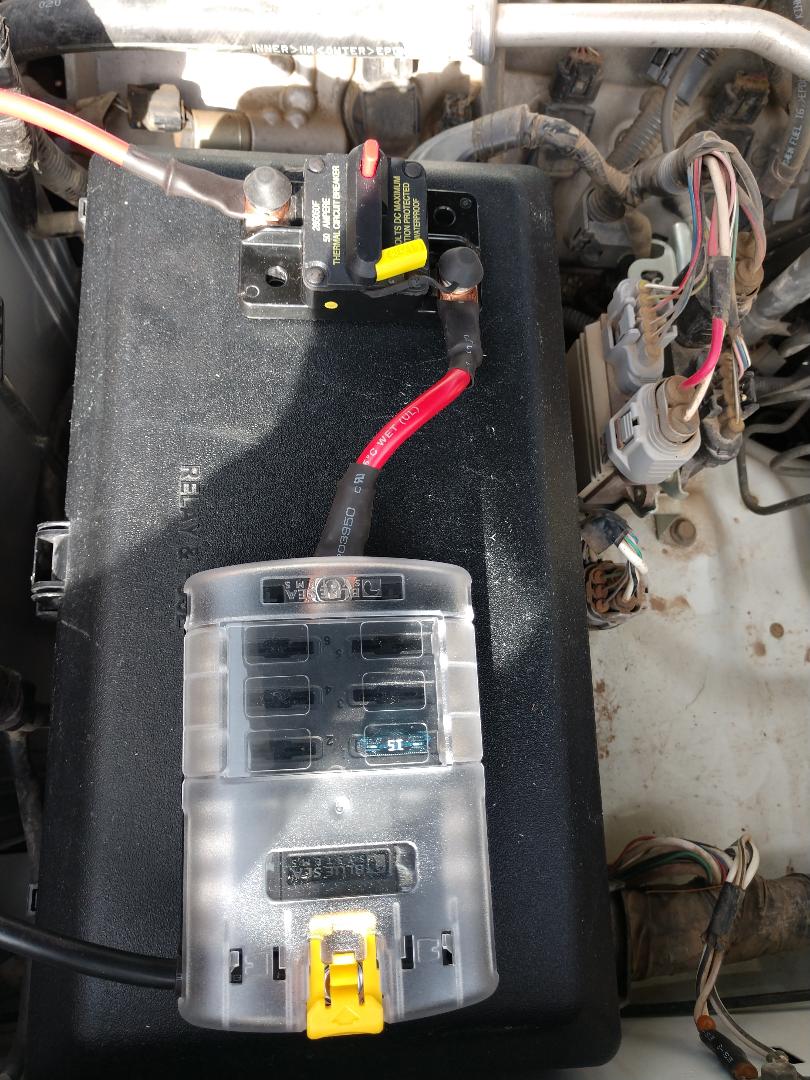 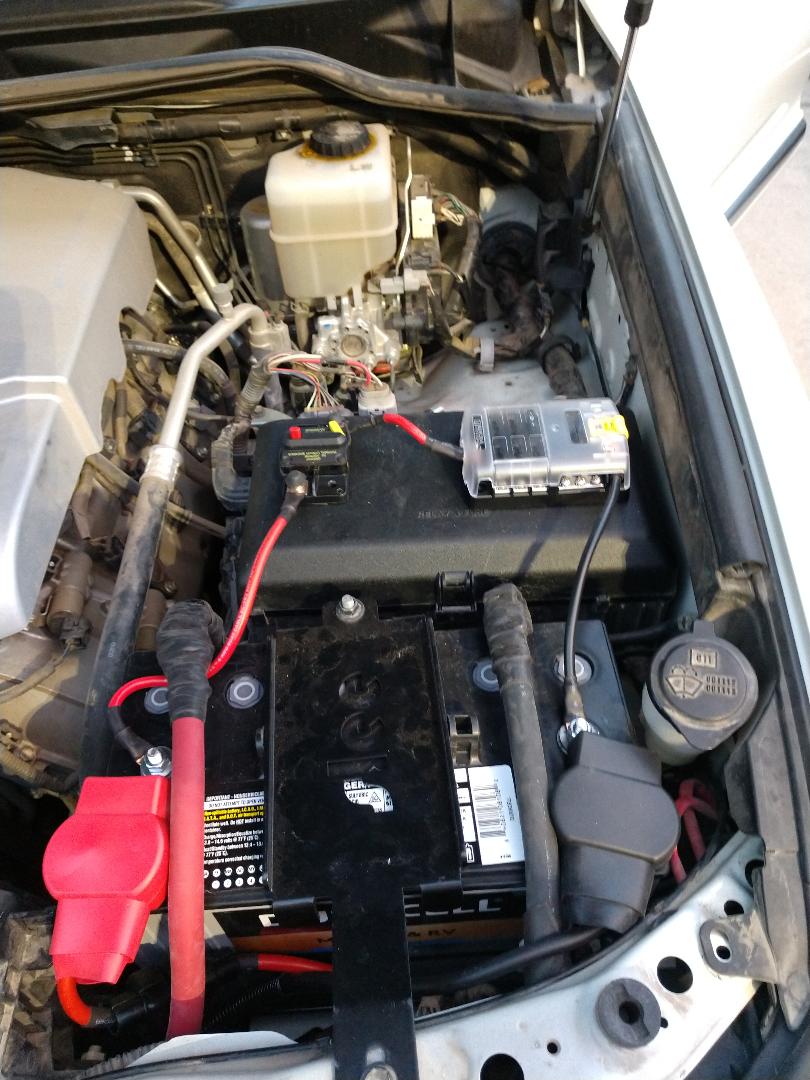 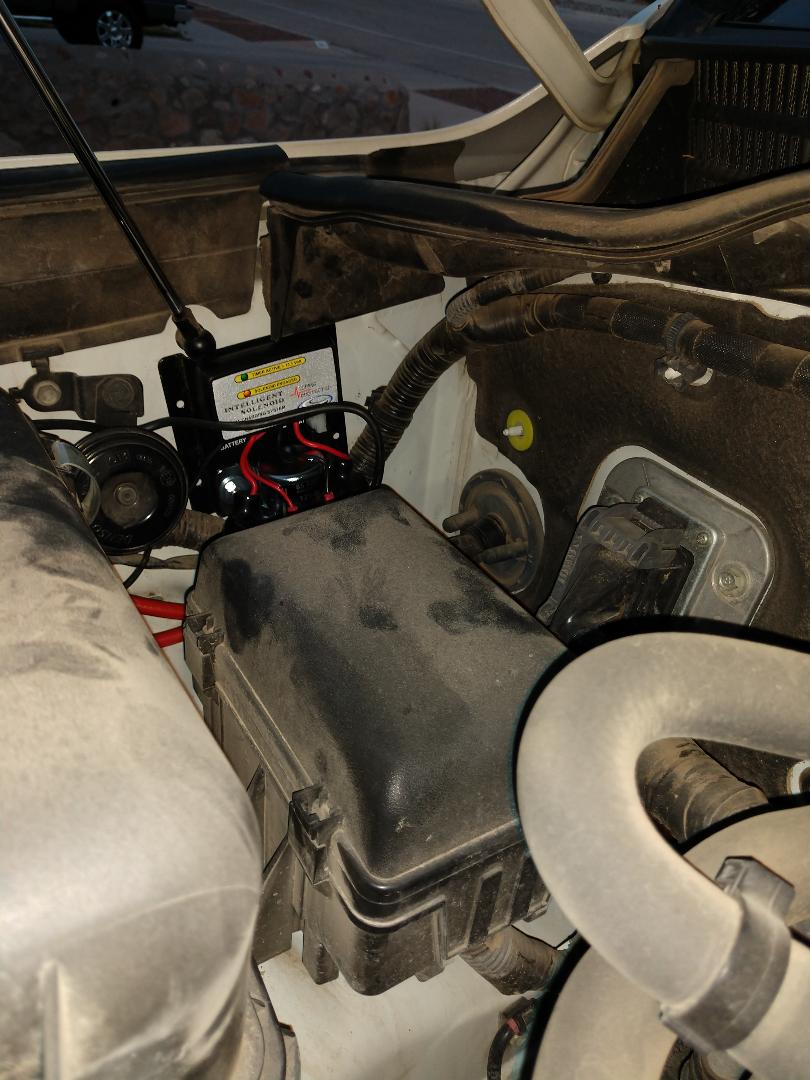 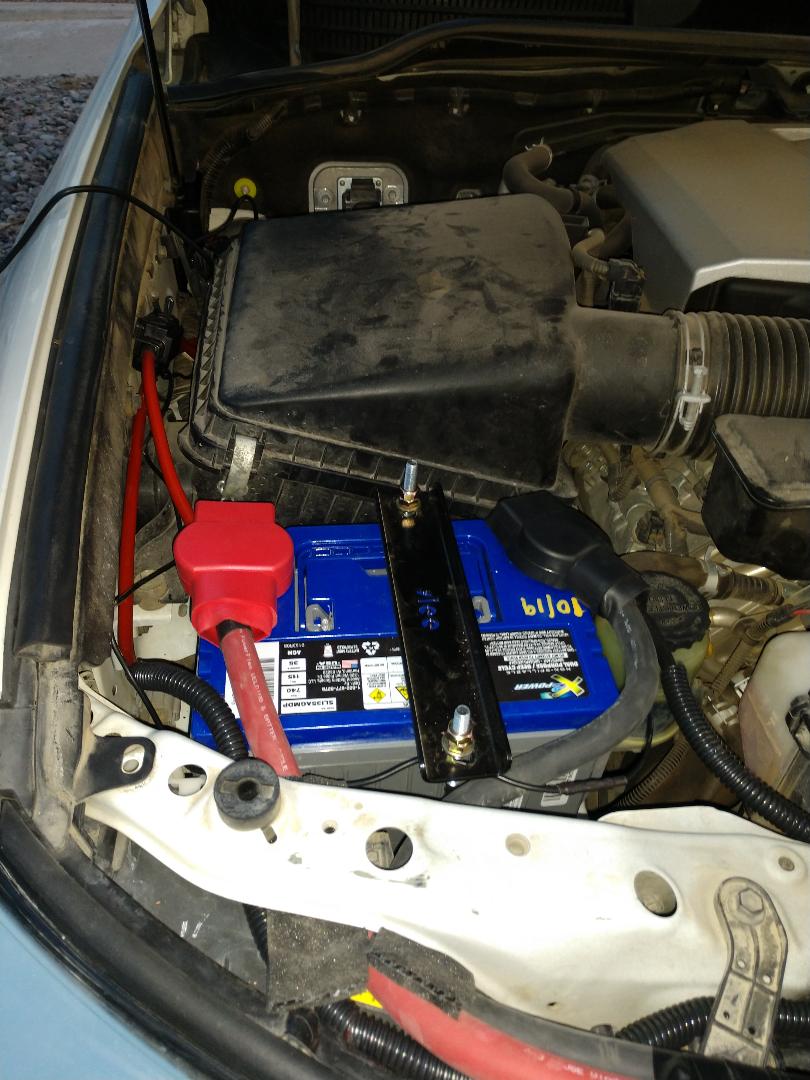 looks good! where did you get your cables 2/0 cables?

Also, for what it's worth, you could have gone without extending the negative cable. You could have just relocated the stock one to the other side, or gone from 2nd tray to the frame/engine block.

Thanks.
National Luna advises not to use a chassis ground. I used 4/0 gauge cable to switch the batteries . Getting cables with terminal ends made the switch very easy.

Hopefully getting cables through the firewall will not be too difficult.

mep1811 said:
Thanks.
National Luna advises not to use a chassis ground. I used 4/0 gauge cable to switch the batteries . Getting cables with terminal ends made the switch very easy.

Hopefully getting cables through the firewall will not be too difficult.


the stock cable splits off to 2 places. 1) chassis and 2) engine block. Did you change yours?

radman said:
the stock cable splits off to 2 places. 1) chassis and 2) engine block. Did you change yours?
Click to expand...

No, I removed the battery post adapters and bolted my extensions in place of it. Very easy. I routed the cables around the front first.

I read many many pages about doing dual battery setups prior to installing mine. Several cautioned against running the heavy cable across the front core support above the radiator. I know it's remote, but in a front collision, it wouldn't be a stretch to have the positive cable get pinched somewhere and short directly to ground. This would cause a fire that would be difficult to put out. I ran mine all the way behind, across the firewall above the engine, then forward, all encased in braided flex loom (love that stuff).

That is another way to do it. I believe the dual battery diesel models run the cables across the front.

Yeah, I have mine in mesh sleeve zip tied up against the firewall flange with the OE wiring bundle. It's a bit longer route, but I'd rather have that than have an electrical fire aggravate an otherwise repairable collision.

FWIW, anyone looking for a second battery, Tacomaworld has a pretty good deal through a group by for Northstar batteries:

CLOSED PRICES ARE GOING UP NEXT YEAR! I contacted the same vendor as the previous times and is down for another one. If the group size you want...

Finally finished the install. On to the next project. 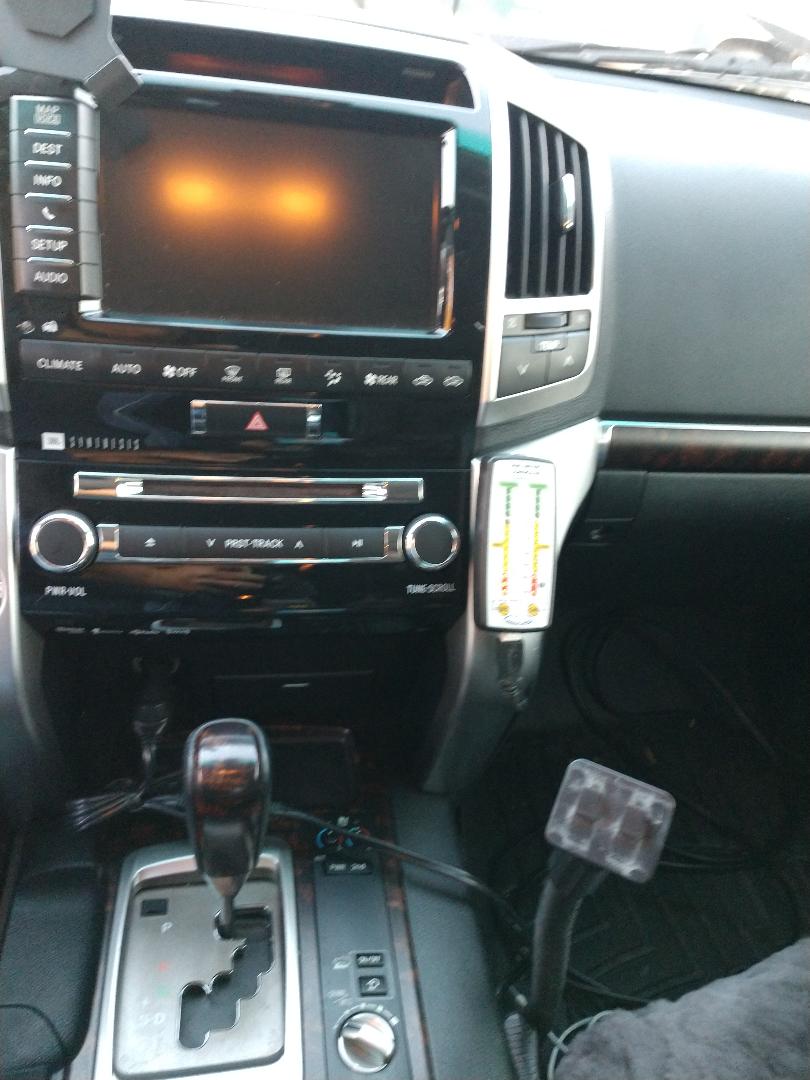 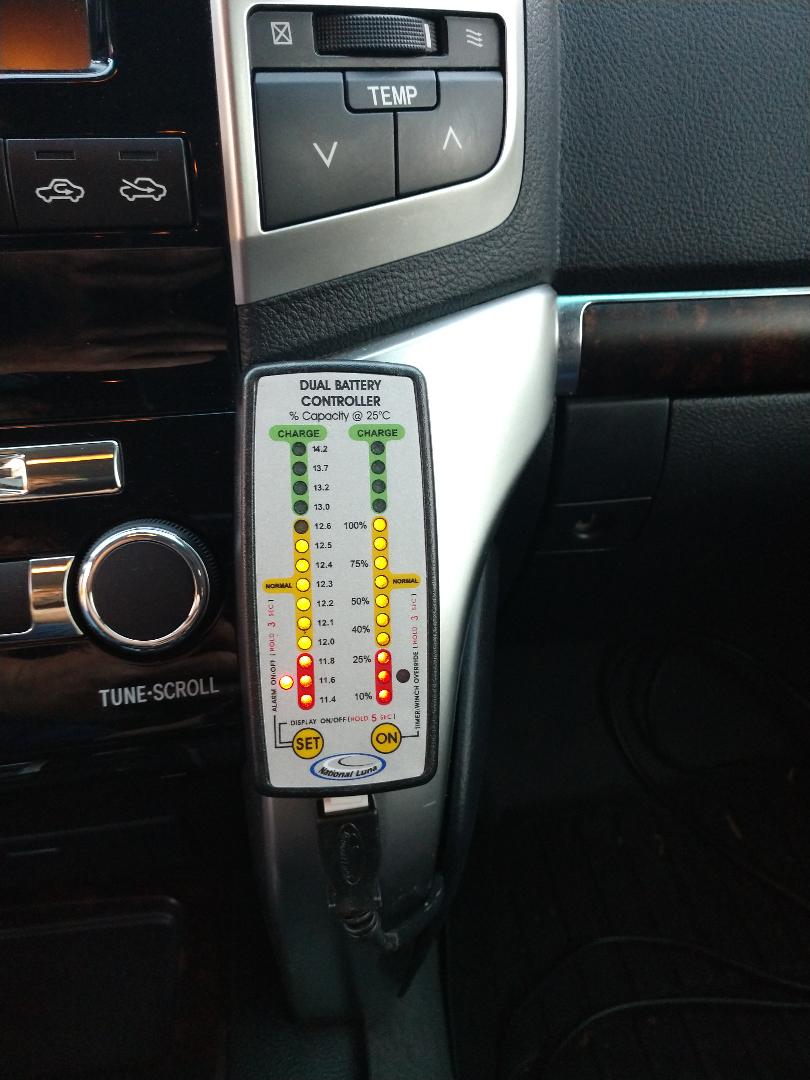