I can't believe its my turn already.
So, I daily drive an 1992 FJ-80 that I got handed down from my parents.

My parents are Land Cruiser lovers though. They both had 40's which they took to the beach.
When they sold those, they bought a new 60 and after a little bit of using it, they really hated it. They went to the dealer and looked at the new 80's there. The dealer offered to do a trade with a reduced price, they would trade it in with a 5,000 reduction on the brand-new 80. Luckily for them, the dealer never asked for the 60 when they drove home the 80. The next day, they sold the 60.

The days of my 80 began. A year earlier, I was born (1990). They bought the 80 in 91. My dad drove it as his DD and did some off roading. Went to the beach as always, fishing, and hunting. Mostly just DD stuff. But he wasn't afraid to go out in the woods and scare off poachers and those pesky dirt bikes.
After many years gone by, he was leisurely driving through the woods uphill and hit a muddy spot, slammed on the gas to make it out. Somehow, all the oil leaked out and the engine later seized pulling into work!
It sat for a while. My dad was reluctant of giving it up, but knew he should. But my sister hinted that the insurance should cover it. And it did (AAA rocks!), its an off-road vehicle and the incident was off-road. So, they replaced the entire engine for a super low price.
After getting it fixed, loaning it to my car-idiot brother (dented bumper, broke front axle just driving it around!) it got to me as my Christmas present (I asked for a Lift Kit too, but that didn't come).
It was a dream come true. Only my parents and I knew the power of this thing that was so neglected by my old brother. I planned on harnessing it and making the best off-road vehicle in town. And, I could see better. I was driving a little Jeep Cherokee Sport and standing at 6'6" its hard to see to your right when the stupid rear view mirror is blocking your sight. The Land Cruiser was a great open cab that I could see everything.

Now, its mine and I figured it wasn't up to par as it was:

As you probably guessed, my brother didn't stop fast enough and yep, you guessed it, hit some ford-150's elongated ball hitch. Ugh.

Even as stock I did a little off roading, as any cruiser could: 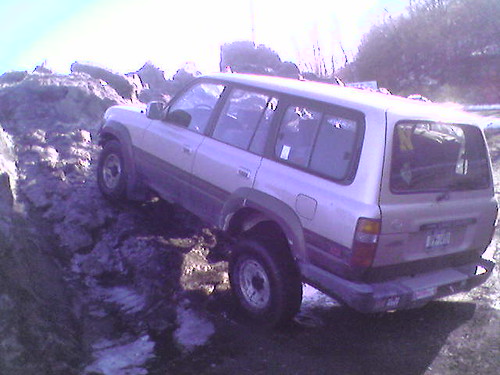 A cruiser dominance story here: I went out into my woods with a visiting carpenter at my dad's shop with his jacked up jeep. Big tires, cb the whole deal. I took him out and got over a rock which he couldn't. Too funny.
Last edited: Sep 24, 2007

First thing my dad agreed to let me do is get new tires. He was into it as much as I was. He said as my Birthday present we would go down to "Chango Corner" and get some Cooper STT's.
We talked to the guy, over payed and then got them about 3 weeks later! (Not going there again.)

After having those on for about 2 weeks, I knew I couldn't keep driving it around with those awesome tires and such a crappy front bumper. OEM? Nah. ARB? Why spend the money. So, I pull into my Dad's scenery shop which conveniently has an entire metal shop in there complete with flat stock, steel cutters, welders, anglers and steel tubing. I pulled it into the shop and started to take it apart, blindly. I just found the bolts and pulse-wrenched those things off. We later started to build the bumper from a huge piece of steel we found laying around from one of our productions. Fab'd up a good mount and pieced everything together. Made mounts for the KC Lights and wired them up. Took it off and painted it with this "DTM" paint (Direct to Metal). But I wish I spray painted it or somehow powder coated it, because that stuff rubbed off like dandruff the nerd sitting next you in math class. I spray painted everything behind the bumper and mounted my license plate.
I drove home with a new pride and decreased mpg.
A day later I reluctantly drilled the huge hole in my cruiser for the CB mount that I got at Radio Shack. Got a Firestik and wired everything up. Heres before and after of all those mods:

Here's a closeup on how we mounted the bumper, pretty simple: 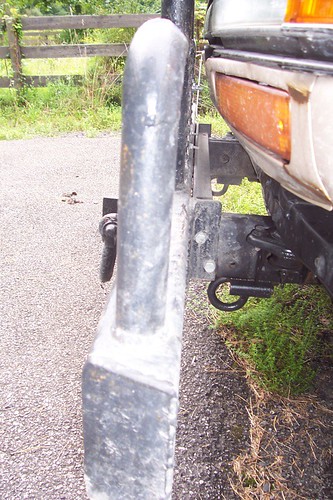 After driving around and impressing a lot of people, I still wasn't satisfied, as any "cruiser improver". I wanted to get a roof rack for it. And as you guess, I wasn't going to shell out money for one of those real nice ARB Racks. I found an awesome deal on KC's 57 Series and ordered them for $100 a pair complete with harness. I went to the shop the next day to start building. 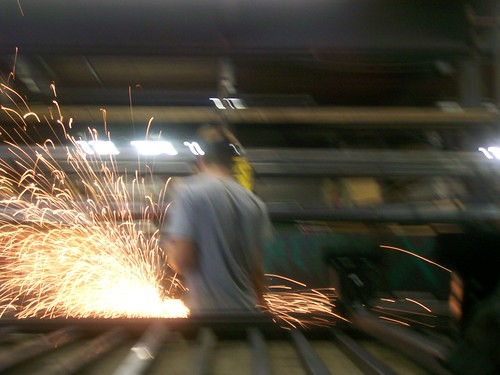 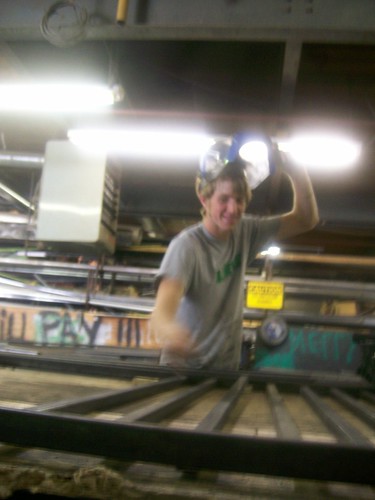 I used my dad's old ski racks to start clamp it down to the roof. They work the same way that ARB mounts do, so I didn't feel grief using them. After a week, I completed it with some rough edges, SPRAY PAINTED it this time and mounted it with a little help. I made a tire mount and put the tires up there. Got the lights up there and mounted them up there too. Now I felt like my rig became ready for anything.
People always said: "Jeez, that thing looks like an Australian Expedition vehicle or something. What are you going to put up there anyhow?"
I would say: "Gas cans, tires, tools...bodies".

The last of the external modifications we now complete for now. I'm still hoping to get convince my parents to let me get a lift kit. I feel bad being smaller than some jeep. I know I'm better than it, but I want to make sure everyone knows it. I know from personal experiences in my life that height matters. But no lift yet, so here's how it cruises today: 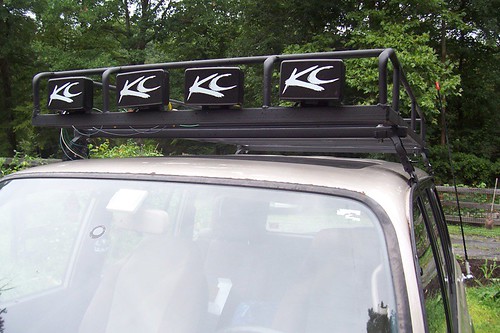 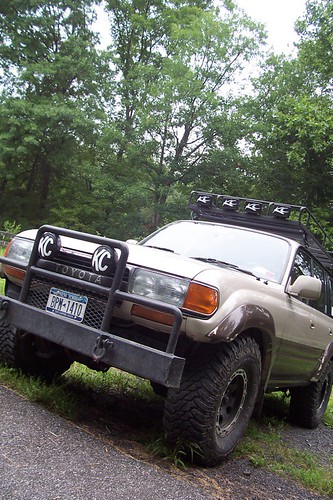 After completing the outside, I promised my self that I wouldn't tinker with the inside until I KNEW my engine was in tip-top condition. I didn't want to invest into a good stereo and then have my cruiser die out from something I could have fixed. By this time I personally hit the 200k mile mark.

But, other than an oil change and a radiator fix with the thermostat replaced, I ended up tinkering with the inside. I wanted to put Mac Mini in my glove box, hook up it up to a new head unit and put a touch screen where the factory radio was. After some encouragement from guys here, especially from EricE (who did similar) I did it.

After a lot of wiring, pushing of wire, skin cutting, wire splicing and taping I got it there and working.

Here's how it ended up:
Mac Mini in Glove Box
Head Unit in Center Console Box
TS carved into where the old head unit was 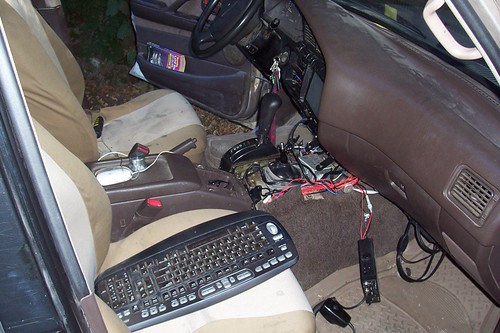 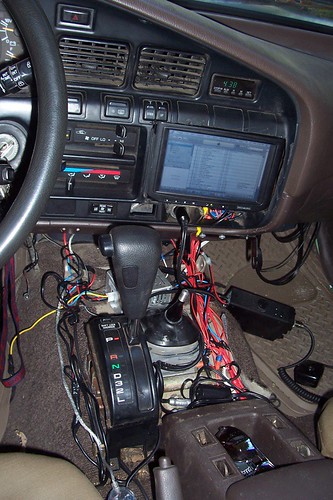 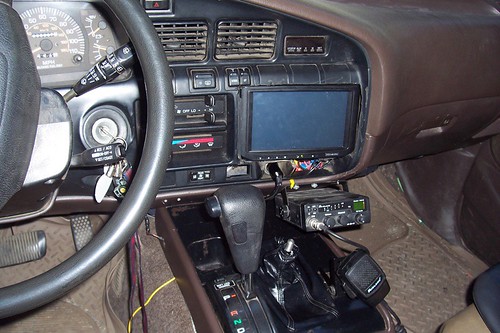 That's all of the mod's I've done. I know its not much compared to others here but I wanted to get this done and over with before I forget how I did it.

Here's somewhat of a diagram of what I put into it:

Driveline:
New U-Joints on front shaft - SUCH A DIFFERENCE!

Now I'm a senior in high school and I've learned so much in a half-year working on my cruiser and I'm so glad I have resources like my parents and this awesome website to really help me get me unstuck. I've probably learned everything and more from working by myself and teaching myself rather than taking the Automechanics class at my school my mom keeps bugging me to take.

I just want to find other Cruiser Off Roaders around. Any in the lower New York/ Upper NJ / East Connecticut area? I have a good spot up near me. I know someone expressed intrest in coming up here. Does anyone off road near me with cruisers? I'd love to meet up with fellow cruiser drivers.


Now I can off-road like I knew I would 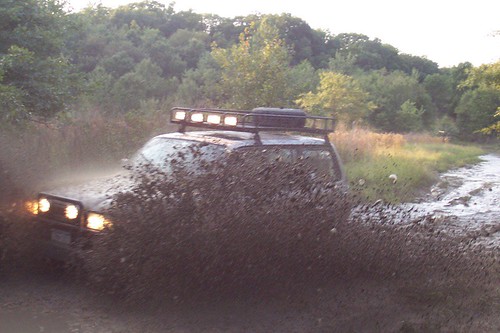 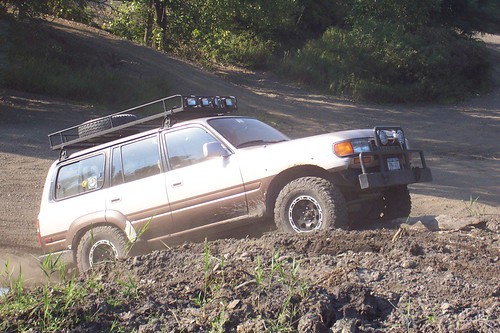 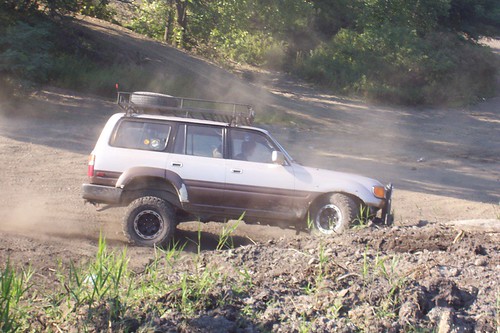 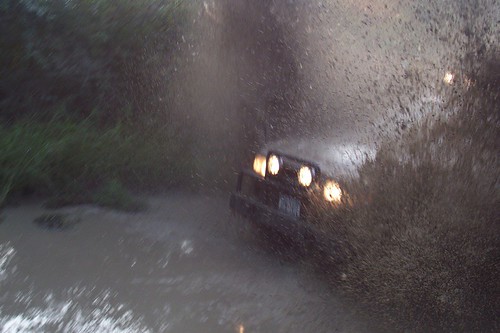 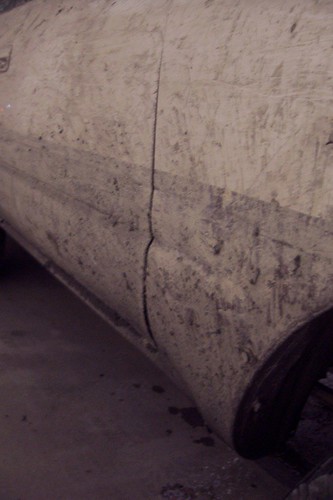 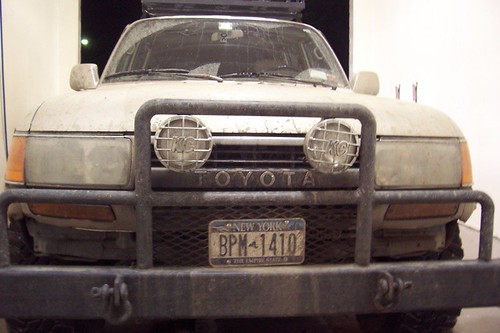 Stay handy with the metal fab work and we will be seeing you in the Hardcore section soon! Me likey the ProComp wheels, looks like mine

Cant wait to see the progress in the future!
"When all else fails, lock the hubs and head for the neighbor's lawn!"

Once again, that is the best color/colors on an 80 series....thanks for sharing...

cc93cruiser said:
Once again, that is the best color/colors on an 80 series....thanks for sharing...


Definitely. Those white ones look too "daily driver" to me. The brown looks the best.

great writeup! it's a really cool story and nice buildup! can't wait to see what you come up with for the rear bumper and lift kit!

That thing is cool. Love the spaghetti-a-thon of wires!

Bumper / cattle guard is cool too. Thanks for the contribution!

nice handy work there. i'm up next week. yet another 3FE.

Red Beard,
Thanks for participating in the ROTW. I love seeing the young guys learning to love Land Cruisers and working with limited finances to do whatever they can to personalize their truck.

I hope you realize you have some great parents. Show your Dad some of the lifted trucks and lay out a plan and budget on what it will take to get you to a reasonable lift (suggest OME 50mm which is ~3") Many guys are now upgrading to the Slee 4" and 6" lifts or the OME J-springs, and it is pretty easy to find used OME springs for good prices. Get permission from your parents then get your money together and start watching the For Sale section.

Nice work, you should be proud. I have a question about the carputer. How long does it take the macmini to boot up?

When the student is ready, the teacher will come.

Life begins at the end of your comfort zone

great write up and nice rig! great job with the mods! keep up the work. like beowulf said keep an eye on the for sale side. youll find a good deal there. keep us posted on the rear bumper!

Nice job Red Beard! The Mac Mini install is pretty cool and you're giving me the itch for something similar.

Truck looks tight. Well done on the front bumper. How long did it take to make?
1991 FJ80

Great write-up! I love the personal touch that you have added. Your rig is totally different (in a very good way) than my bolt-on approach. Way to take advantage or your skillz and resources. Please make sure to update this page as you continue to add mods. I look forward to following your build in the future.

"...and we even had a Lexus wheeling with us, that was a first and it went out, kicked ass and took names." - Heep Guy

scott.b.smith@morganstanley.com
You must log in or register to reply here.