I’ve seen a few posts on here about the P0125 code, but only a few have touched on what I’ve experienced with this troublesome code. Hopefully this post will serve as a reference for anyone trying to track down the root of this problem. What follows is my account of how my truck (’97 LX450) threw the code and how it was eventually fixed. Shout out to @4LowandSlow and @OTRAMM for their help.

It should be noted that my truck, other than suspension and slider mods, is fully stock.

My truck blew a head gasket at around 308K mi. I opted to do a full engine rebuild since there were a lot of hard miles on the motor and the condition of the bottom-end was a question mark. I had entertained the idea of doing the rebuild by myself, but soon realized that with work, two kids, and another shop project I wouldn’t have the time. Instead the work was done by OTRAMM up in Bealeton, Va. They are a fantastic Land Cruiser shop who I trust and they have plenty of experience with 1FZ rebuilds. 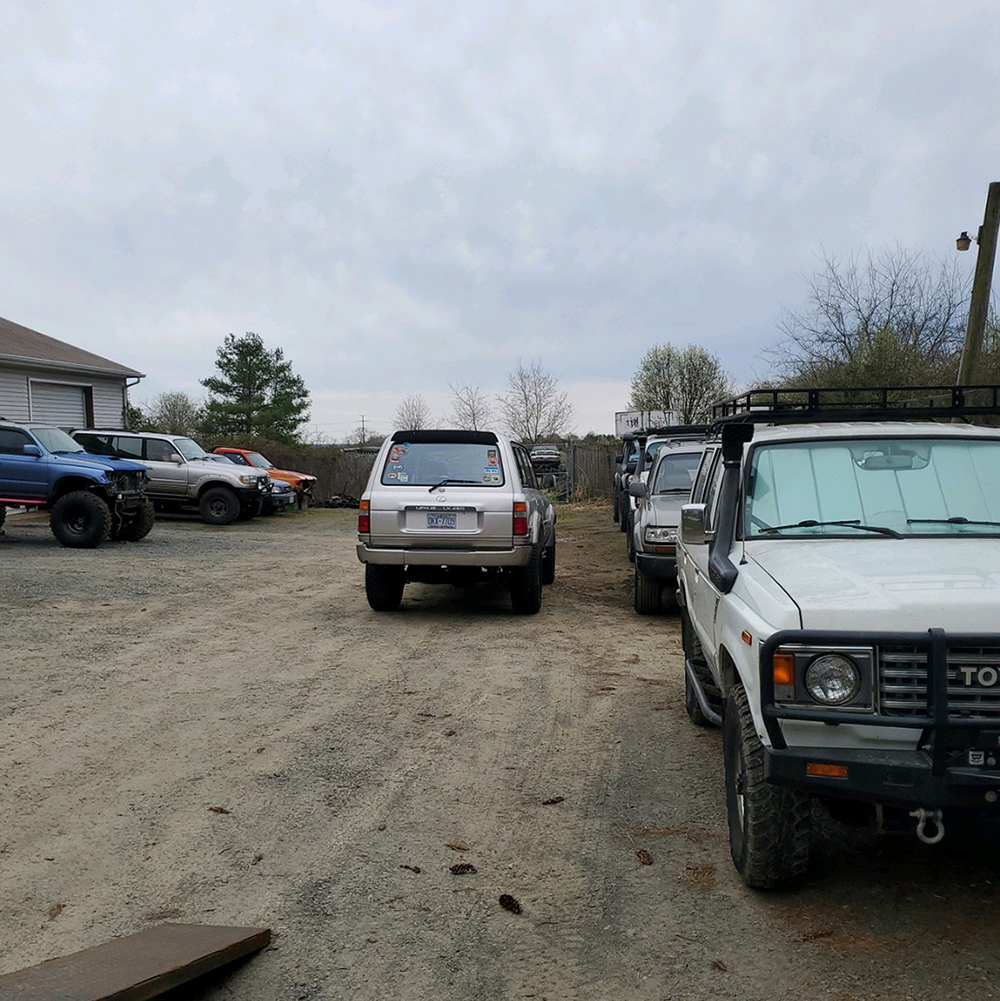 They did a wonderful job on the rebuild of my motor. I chose to go with a new short block because of the, then, availability and relative price when compared to rebuilding the original block. The truck, an NC vehicle, was sent up to Norther Virginia, where OTRAMM would do their magic. 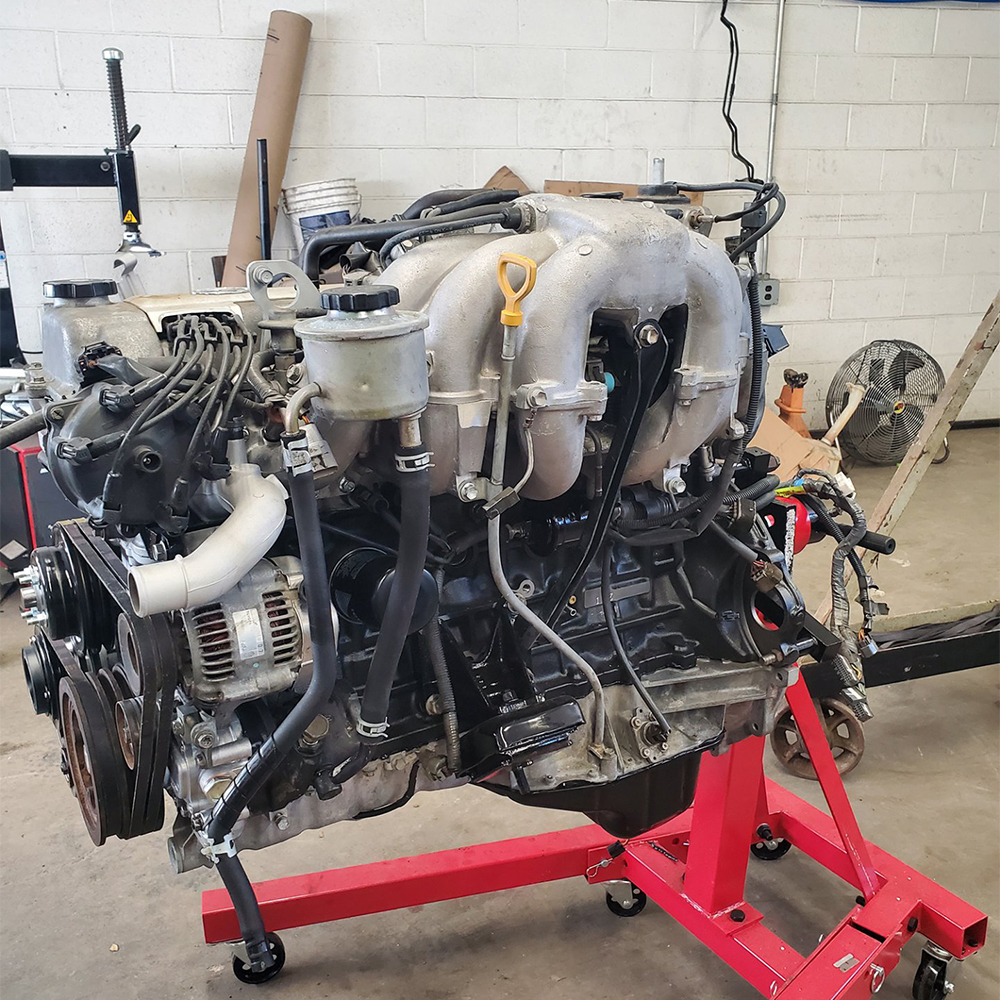 The only problem the guys at OTRAMM experienced was down to my own absent mindedness. They spent many hours trying to troubleshoot why the truck wouldn’t start. They checked all of the ignition electricals, eventually tracking it down to a disconnected security module. The same security module I pulled, bagged, tagged and put aside while taking out the interior of the vehicle to clean while the truck was in Virginia. The security module went back to OTRAMM with many apologies, was plugged into the truck which fired right up.

While test driving and breaking-in the vehicle, all the fuel trims and O2 values looked good. The break-in miles were completed and a note was sent to me to come get the truck.

By now more than enough time had elapsed for the truck to be out of registration. One of the first things I needed to do when it got back was to take it to get inspected. The day before the inspection, I put the interior back in the truck and drove it a short distance on neighborhood roads to see how everything was doing. Nothing stood out and no CEL, so I planned on getting the inspection the next morning. That morning it would be the first time the truck had gone over 40mph, for a longer duration, in a while. Only about five or six minutes after I got down the street, the CEL came on. I turned around and drove the truck home to assess what was wrong. The code I pulled, as is given away by the title, was a P0125: Insufficient coolant temperature for closed loop fuel control. The upstream O2 sensor was mostly reading zero volts on my scan tool. Occasionally it would read 0.035V to 0.055V. No bueno.

Round One - O2 Sensor replacement:

After reading numerous threads here on ‘mud, I learned that replacing the O2 sensor usually fixed the problem. I checked the resistance of the upstream O2. The resistance was within spec, but I wasn’t convinced it was a good sensor. I ordered a new Denso upstream O2 sensor (Denso part no. 2344157, Toyota Part no. 89465-69085) from Rock Auto. The sensor in the truck had been in for several years and was probably on the receiving end of coolant passing through the exhaust system when the head gasket blew. I Had a lovely time getting the new O2 sensor in when the studs broke at the O2 bung. With new studs, nuts, and sensor in place, I started the truck and looked at my scan tool. Nothing, the signal was still giving the same low voltage reading.

I dug deeper into the FSM’s recommendation of what to check with respect to the P0125 code. Their recommendation is to do an open/short test on the wires going to and from the upstream sensor and ECM. I got out my multi-meter and started looking at the values I was getting on all of the wires going to and from the upstream O2 sensor and the ECM. I also checked the downstream O2 sensor just for comparison. The values I got were as follows.

Someone will obviously say that I could have tested more than this to troubleshoot the problem, but at this point nothing really stood out too much.

Shortly after doing the open/short test I tested the voltage coming directly from the upstream O2 sensor. I took the truck out and drove it until it reached operating temperature. I brought the truck back home, unplugged the upstream connector and checked the voltage directly off of the O2 sensor. The sensor was getting between 0.300 V and 0.800 V. When I plugged the O2 sensor back into the connector the signal would drop to 0.025V and fluctuate between that and a negative value.

Note: I understand the values mentioned in the paragraph above aren’t necessarily accurate coming from a multi-meter. Multi-meters average out voltage values. The proper way to keep track of voltage values from an O2 sensor is typically with an oscilloscope. This at least gave me some idea of what was going on.

I did the “jiggle” test on all of the connectors and terminals, then de-pinned both ECM and O2 sensor housings to check the condition of the terminals. The terminals on the O2 sensor connector (from the no.1 engine harness) were in excellent condition. There was no sign of oxidation, poor fit, or broken wires. 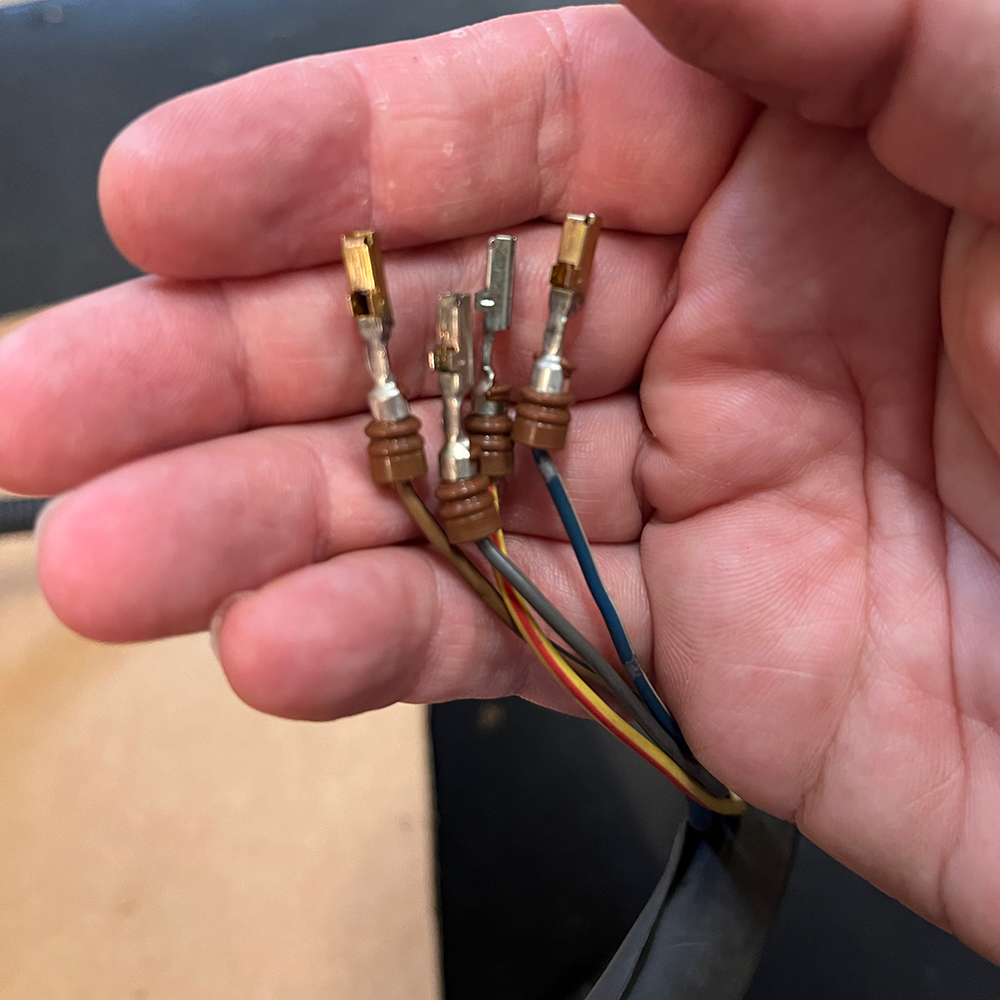 The ECM was not the same story. While the connections and wires looked okay, the housing of the E5 connector had a hairline crack. Terminals 1 and 5 were loosely connecting to the ECM, but the wire condition looked okay. Still, I opted to solder and heat shrink new terminals (Toyota Part No. 82998-24020) for both terminals 5 and 13 – the upstream and downstream O2 signal wires. I wanted a better fit for those connections. 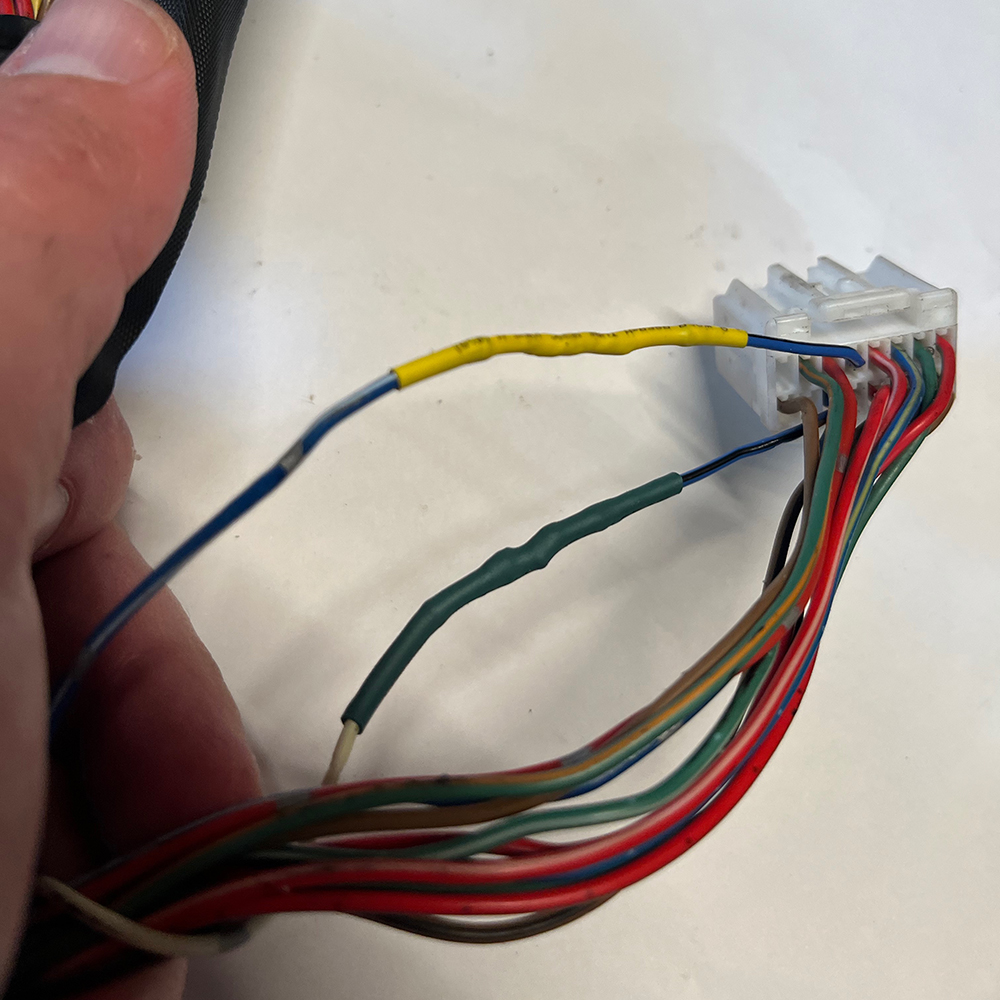 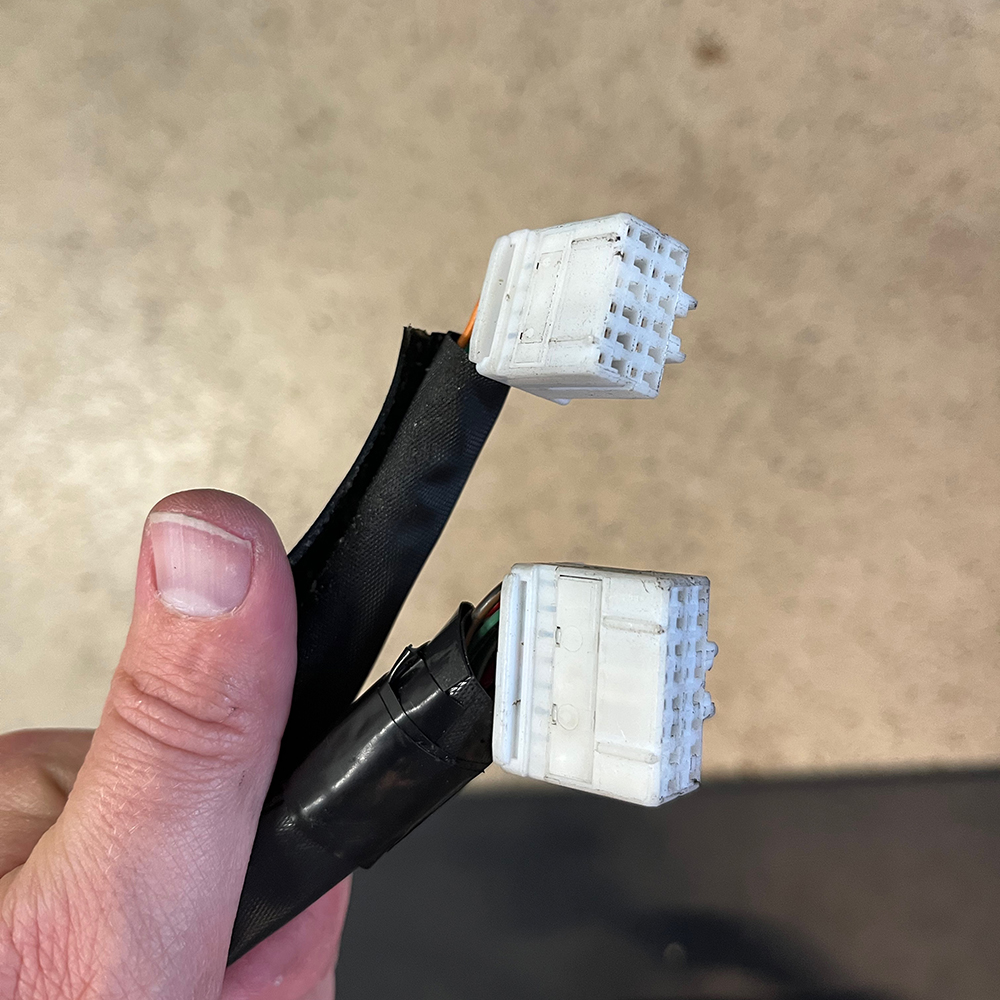 With everything rewrapped and plugged back in, I started the truck and checked the scan tool again. No change…nothing. I was starting to run out of options.

Round Three - Swapping the ECM:

I didn’t want to fire the parts gun at my truck, but the more I thought about it, the more I realized there could be something wrong with the ECM. I tested my theory by getting a friend to lend me a good working condition ECM (Toyota Part no. 89661-60652), then swapped mine out for his. I fired the truck up and checked the scan tool. Still! No change to the O2 signal voltages. Now I was banging my head against a wall.

Round Four - Replacing the No. 1 Engine Harness and The Fix:

Replacing the engine harness was a “Hail Mary” for me. I couldn’t find anything openly wrong with it. However, If I’m being honest, I should have replaced this thing long ago, at the very least while the engine was out. The engine harness (Toyota part no. 82121-60343) was old, crusty, oily from leaks, and questionable. The plastic routing channel that attaches to just under the cowl was a bit mangled. The wire loom coming out of said plastic channel was now missing its thermal wrapping, right in that crucial spot next to the EGR. Where all the heat is. After talking to another cruiser buddy @4LowandSlow , he convinced me to replace the harness sooner rather than later. The wires were too exposed and wouldn’t be safe for long. Soon enough I’d probably be finding all sorts of electrical issues with my injectors, other sensors, and anything else that was exposed in that harness.

With two days carved out to replace the engine harness @4LowandSlow and I took our time and made sure we delicately (sometimes not) took out the old harness and looped-in the new one. With the new engine harness in, a few gaskets replaced, and the coolant topped-up we went to fire up the truck. The truck fired-up on the first try - always a bit tense with this big a job. Then came the nail-biting moment to plug in the scan tool to check the sensor values. The scan tool was plugged in and I navigated to the O2 readings, it read 0.350V to 0.830V. The upstream was reading perfectly as was the downstream. The fuel trims were back to normal and the truck was finally in closed loop! Hooray!

It was lengthy to go through all the diagnostics to say the least. Hopefully something in this post will help someone in the future. Perhaps it will give some insight.

I don’t know exactly where the harness went bad. Nothing I spotted had openly been burned through or had been broken. I did notice that in several spots along the harness the wires had lost a great deal of pliability. Some spots did look to be quite crispy, but not exposed. Several connectors broke easily upon removal, as is custom with a 300K+ mile engine harness. I feel that I made the right decision in replacing the harness, regardless of it fixing the O2 sensor issue.