This leaves me with the dash controls, wiring and amplifier relay. Would also like to hook up idle-up if that's not too difficult

I must admit I know absolutely nothing about aircon, so this is quite a big project for me. I have managed to wrap my head around where all the components go and how to mount them etc.. But I need someone to explain how to wire this thing up. Like how does the wiring for the aircon system in an hzj75 work?

so far i think that the switch in the dash talks to the amplifier relay which takes a signal from the tac for rpm and uses that to switch on and off the compressor correspondingly. From what I understand the fan which is already in the vehicle will blow air over the cooler box in the cab and cool it.

What wires do i need to aquire?

Also if anyone knows how to hook up the idle-up i would really appreciate it. cheers

Its also turning into a bit of challenge to find the amplifier and the controls, let alone wiring. cheers
1992 Landcruiser 75 Series Troopcarrier
Sort by date Sort by votes

Also is there any other parts that I need from that list?
1992 Landcruiser 75 Series Troopcarrier
Upvote 0 Downvote

Hi
If you want it all factory, here is a wiring diagram from the 10/1984-1/1990 body maintenance manual (so not exactlyfor your truck!), which gives an idea. 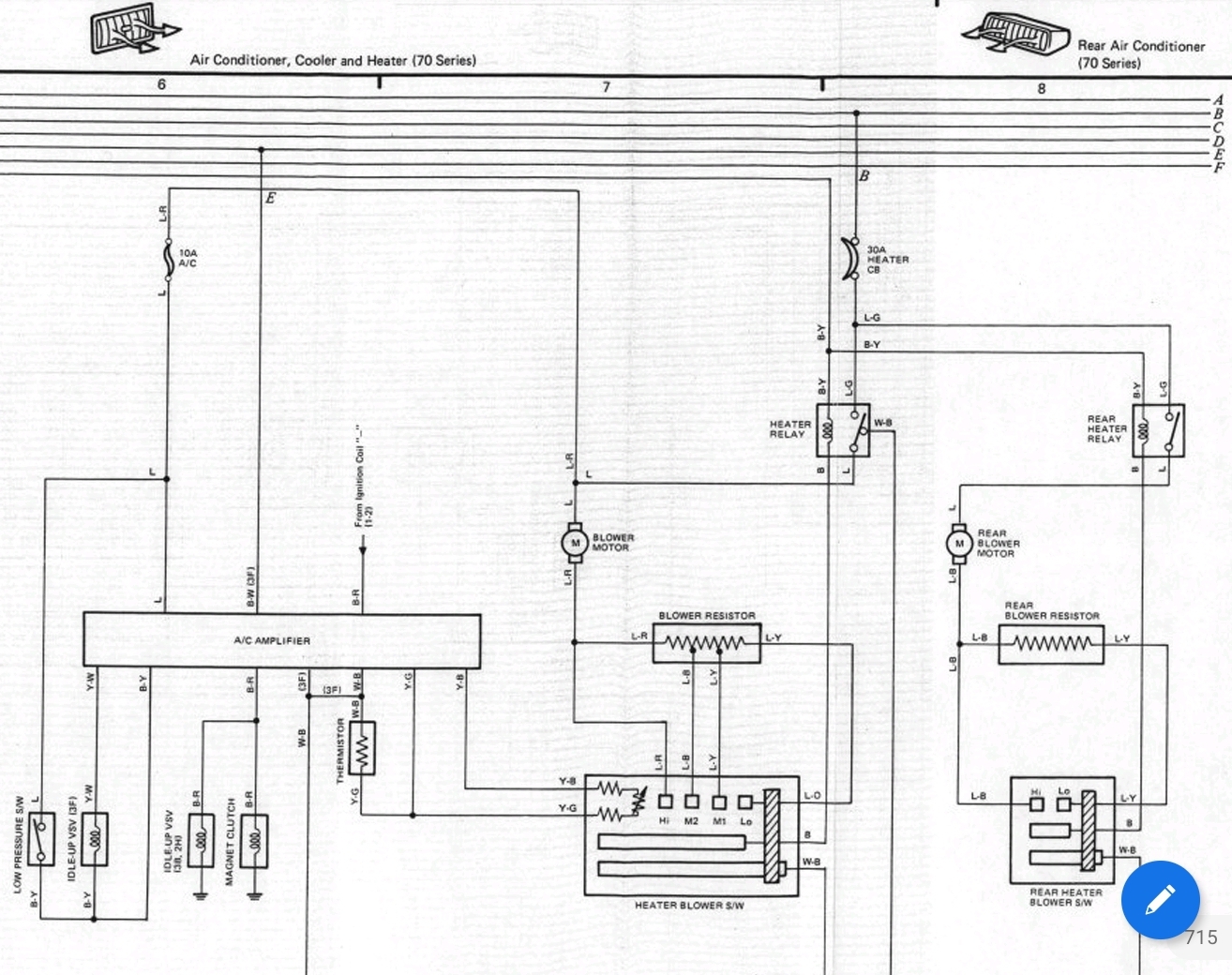 I have a simple, unregulated A/C in my truck, which was also fitted later and thus doesn't use the factory wiring. So l don't have the amplifier unit.
It works like this. You can see the same principles in the wiring diagram, too :

A/C can only be operated when the blower fan is on to pickup the cold and distribute it throughout the cab.
So, main power is grabbed from the blower fan ON, trough the A/C on-off switch in the dash, from there to the thermistor in the dash (behind glove-box in my truck) and from there to a relay (coil circuit) in engine bay. This circuit is fused by the standard fuse of the fan.
The relay's load circuit takes power from battery positive (seperate fuse there) , trough the low pressure switch (on the condenser, next to the radiator), and eventually operates the magnetic clutch on the compressor.

The refrigerating thing in the dash, where the cold is produced, is actually not a condenser (like you call it), but an evaporator. (Turns the compressed, liquified refrigerant back to gas, consuming heat thus producing cold). This one may produce condensed water and thus has a drain hose throughout the firewall to the outside ground.
The condenser sits in front, next to the radiator. It should have a dryer along it, which also hosts the low-pressure-switch. (Looks like a column)
It's not specifically on your list, but may probably be one unit with the condensor.

I don't think the amplifier picks up a RPM signal to switch the compressor clutch. If at all, it picks it up to control the idle-up, which affects the throttle, not the compressor clutch.
In my older application, the idle-up is vaccum-operated, though: The power line to the clutch forks to a VSV (electric vacuum switch valve), which is engaged when the A/C compressor clutch is engaged. (This makes sure idle-up only happens when compressor is really on).
The VSV delivers vacuum to actuate the idle-up. I don't exactly know how that actually works on the throttle, but I believe it's actually not rpm controlled: When A/C on, it provides vacuum power to bring idle up. When reving up by pedal, this simply outperforms the moderate idle-up.
May be different in later applications, though.
That s all of my wisdom.
Good luck Ralf
Last edited: Nov 14, 2022
Upvote 0 Downvote

Thanks, Felde, that's a massive help, and looking at the diagram you provided I can see how you've wired everything up in your system. From what I can tell it is going to be more of a mission tracking down the last remaining components than actually getting the thing to work. Although I like your system without the amplifier, I'm going to track one down as by the looks of it - it acts like a black box and most of the wires should already be in the truck, then it's just plug-and-play. Hopefully, the wires for the compressor are already in the engine bay... Thanks for your help!!
1992 Landcruiser 75 Series Troopcarrier
Upvote 0 Downvote
You must log in or register to reply here.