When I bought it the tranny or t-case was making a whining noise. I figured there was a bad bearing somewhere and i'd have no trouble just rebuilding the offending unit. I tore it all apart and discovered the genius who did the conversion welded the input shaft of the t-case to the input bearing. On further teardown I found the input gear had stress cracks on every spline and tooth! it was a bomb waiting to go off. So I had a useless th350 adapter a V8 and an automatic I didn't really want. a little time passed..

I bought a hard top with side doors and ambulance doors. Paint is now a bit faded but better than the rest of the truck! I also bought the correct windshield frame with the wipers at the bottom. its primed and has been for years but not installed.

I searched around and found a th-400 adapter used in good condition and my buddy got me a free th400 tranny that I had rebuilt. Time passed and I never got around to installing the th-400 and I sold it. I decided I wanted a manual and I found a sm420 with an adapter and t-case already assembled. I bought all the parts I needed for the conversion and then let it sit for another couple of years.

I got into building turbo MR2's and even put a 7mgte in my '85 pickup and still the cruiser sat.

I finally found MUD a few months ago and got inspired reading all the build threads to get the cruiser up and running again. I still havent done much other than plan and sell off all the stuff I won't need.

The biggest challenge will be getting the NV4500 mated up to the 1KZ. I'm trying to get a bellhousing, flywheel and Pressure plate for the 1KZ that I can modify to fit the NV4500. Its hard to find and import manuals so i'm just getting the parts I need.

I'm still selling stuff and saving money so if anyone is in need of a 7mgte powered '85 4x4 or a nice seemingly low mileage 350 4 bolt crate motor let me know!

Here are some pics as it sits: 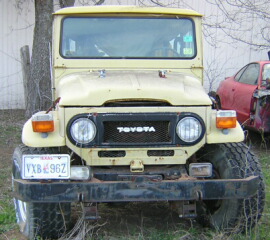 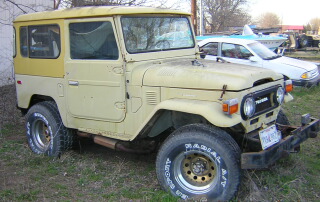 Doing up one little section at a time works for me.

If it was mine, I'd concentrate on getting it mobile and road registered first of all. That way I could enjoy driving it whenever I got sick of working on it.

PS. I couldn't tackle a "ground-up restoration" because I'd lose interest before I got it all back together. But I do admire the people who can!

Yeah thats the plan, mechanicals first then work on the looks.

Oh and i did notice the bezel was upside down. I might filp it over.

I have a kid coming the end of august so i'm hoping to have most of it done by then. We will see if I can get out of my 11 year rut!

toddm said:
Oh and i did notice the bezel was upside down. I might filp it over.


The bezel looks correct to me.

Bezel police!!!
looks correct to me.

Its right? I thought the thick part went down so the "Toyota" was centered. Well one less thing to do I suppose.

I have been looking at the AA nv4500 to 16 spline case adapter. Is Advanced Adapters considered the best or are there others out there? My web searches aren't bringing up any options.

You definetely want to get it on the road before the baby comes. Time will be at a premium after the new arrival. 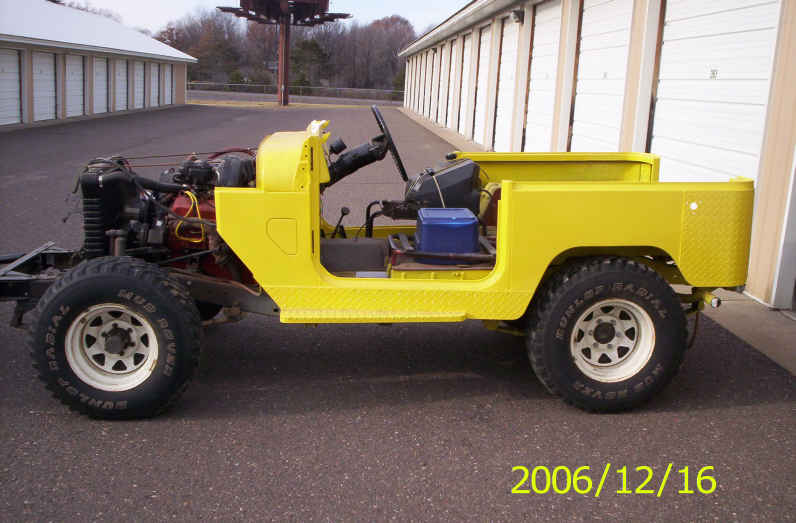 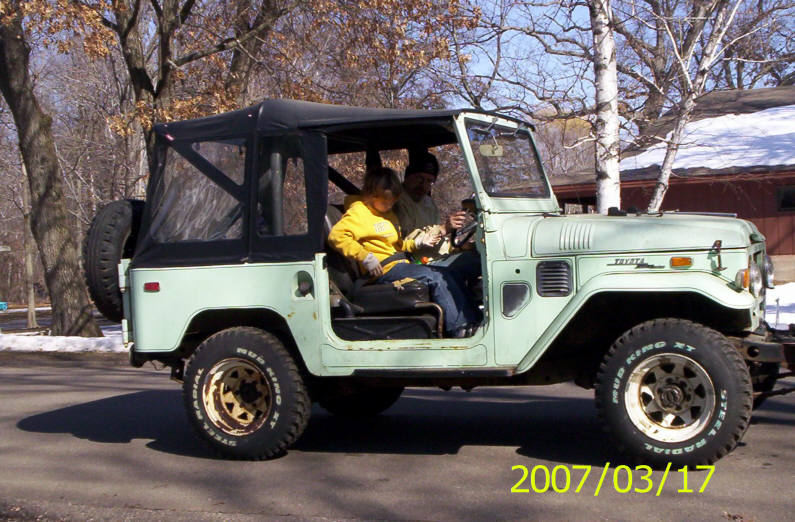 Bezel is correct. Are you messing with the Bezel police's heads???

Tvaldriz said:
Bezel is correct. Are you messing with the Bezel police's heads???
Click to expand...


apparently. Maybe i'll turn it the wrong way for a while to really get them stirred up.

I got my cruiser over to my shop last weekend. One of the 33" tires it has been sitting on was flat. It was leaking really badly at the bead. I took the tire off and the bead basically fell off in my hand. I wanted to get new tires for it anyway due to the dry rot, now I have my chance.

I' guess i'll order the AA adapter on monday. Still trying to source a bell housing for the diesel.

Also I discovered that the input shaft on the NV4500 can be swapped for one of the "light duty" ones for a GM or the non-diesel dodge. This will allow me to use a 1.125" 10 spline off the shelf clutch disk. I have been having trouble finding a 1.250" 10 spline disk that would fit the flywheel of the 1kz without going to a custom disk. Now I Just need to decide if I need the longer Dodge input shaft or the shorter GM version.

I got my 1KZ-TE this week, finally. I pulled the tranny off to take a peek at the flex plate. It turns out it has a 23Lb flywheel that the flexplate bolts to. I think I can have a plate machined to fit the flywheel and adapt a chevy clutch disk and pressure plate to it. Once I get the bellhousing from OZ I can start mocking up the tranny and clutch.

I also started on the wiring. I pulled all the automatic transmission wiring out and some of the body harness, I left all the power wires from the fuse box till I decide what I want to use. I located all my power and grounds from the fuse box and once I get the motor in the cruiser I can finalize the lengths and routing. The wiring is really not that complex. Putting a supra motor in my pick-up was worse. I still need to figure out a tach that will work with the diesel.

It Runs! well kinda. I had the motor hanging from an engine hoist. took me about 4 hours to track down a ground I forgot to tighten up on the engine harness. DOH!! After that it fired right up!

Its pretty quiet even without an exhaust system. I think i'll try it with a 3" system, then add a muffler later if needed.

I also got the AA t-case adapter bolted up to the NV4500 and cut the output shaft down to length. I think i'll need a hoist to mate the NV to the t-case, Its heavy.

welcome a-board! check out the Lone Star Landcruiser Club in Dallas. Also the White Trash of the Elwood Chapter...also a lttle north of Dallas. You can find the link on the TLCA/Clubhouse tab in the header.
I'm in the frame only stage of a 79 40 rebuild...look forward to sharing the misery and extra parts....Good Luck!

40's rock, Sorry, i haven't checked in in a while. I went to a couple of the LSLC meetings back about 5 years ago maybe it was 7 years ago, I forget. I'm not good with dates.

I have made some progress:

1. Had the insert for the flywheel machined.
2. Bought a new input shaft for the NV4500.
3. Bought a clutch for a late 60's 427 corvette. I figure it will hold the torque and its a perfect fit on the flywheel.
4. Got the Bellhousing from OZ. alot of measuring welding and cutting later it fits on the motor and the tranny.
5. Cut down the "snout" to fit the throwout bearing better.
6. Cut up and welded a clutch fork from a R151F to fit.
7. Had to cut the throwout bearing and the snout again to allow enogh room for the throwout bearing. Using a Dodge NV4500 T-out bearing.
8. Made engine mounts and test mounted motor in the cruiser.
9. cut and rewelded the t-case shifter so I could get low range.
10. Interated the engine harness into the LC harness and stripped out all the old LC stuff i wasn't using anymore, all the carb wiring, distributor, emmission controls, etc.
11. Made a mount for an MR2 clutch slave cylinder that I modified a bit.


Lots still to do. My first kid is about a week away now!

Maybe it will look something like this when it's done..... 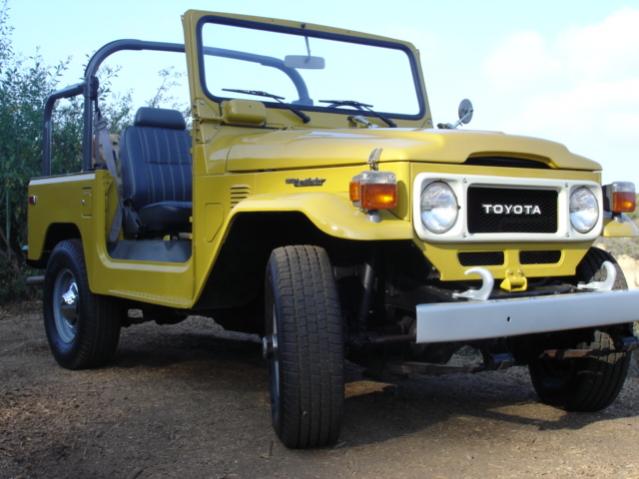 
Not quite as nice as that one.

I finally bought a star!

Pics of the cruiser at my shop, finally out of the weather. And one of my free NV4500, my Uncle Dave rocks! 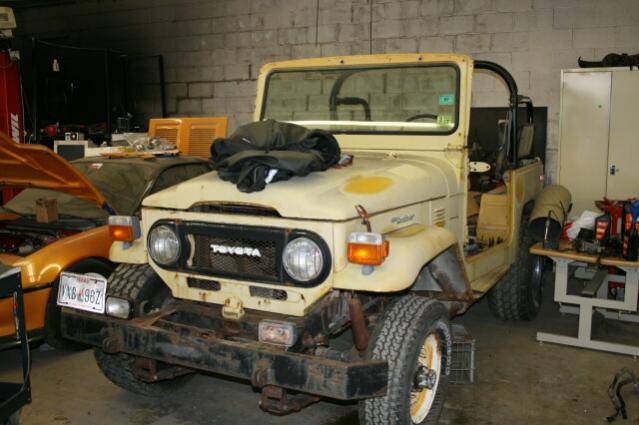 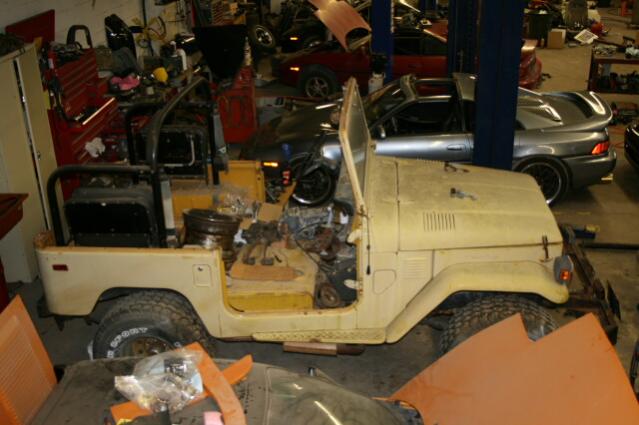 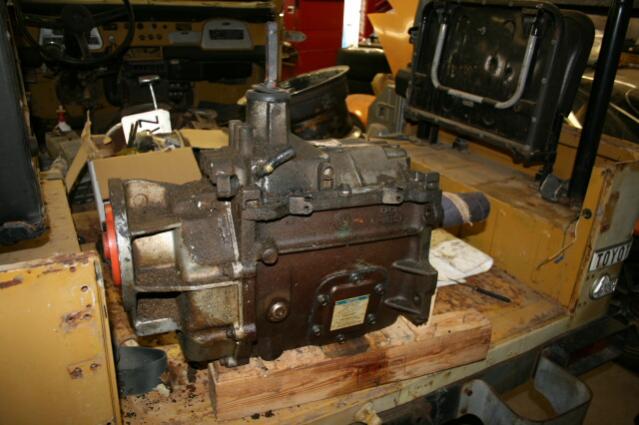 pics of the wiring

I pulled all the wires out of the engine harness that i didn't need, mainly auto tranny stuff. 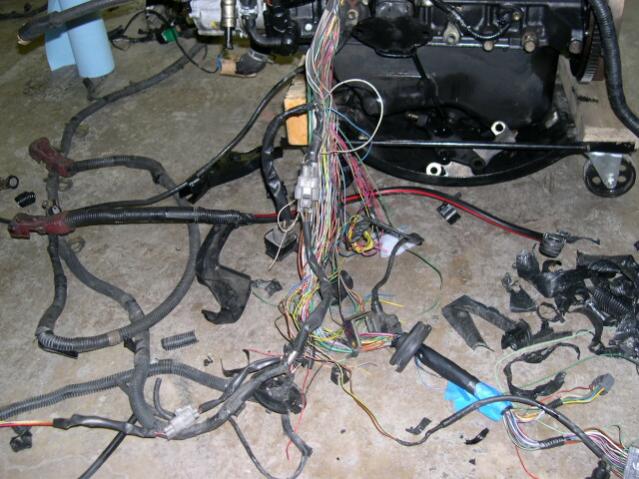 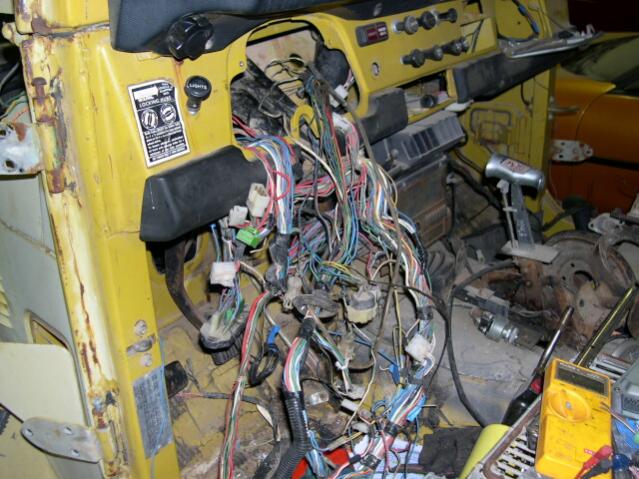 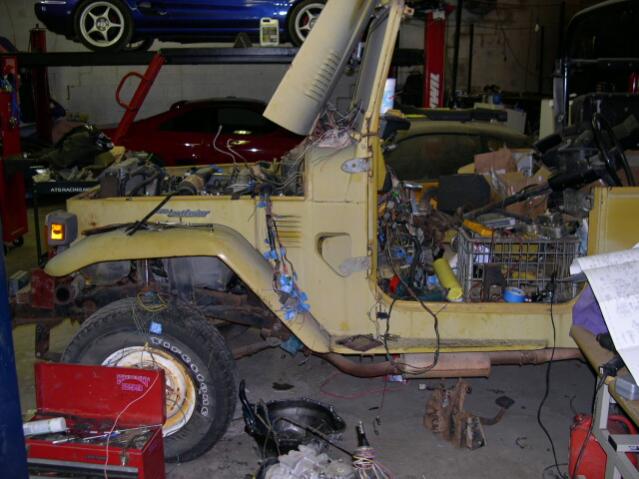 I had to cut the output shaft of the NV4500 to fit the Advanced adapter....adapter. Its straighter than it looks!

I also had to make a new spacer for the transfercase shaft. somehow I got the measurement off by half an inch and had to make an additional spacer.

I did alot of work to the bellhousing. First I welded the plate you see into the back where it meets the transmission. I put the auto bellhousing on a mill with the dowel pins firmly bolted to the mill table, I indicated the center, then swapped the manual bellhousing on to the mill and cut the center hole for the NV's input housing. I also had to cut down the NV output housing a little so i wouldn't need to cut into the pivot for the clutch fork.

Then I added (4) 1.5x1.5 aluminum blocks to the outside of the bellhousing as ears to mount to the tranny. Then I drilled and tapped them and was finally able to bolt the bell onto the tranny. Aluminum absorbs alot of heat! It took a while to get all the welding done on the bellhousing. One time i got a little too hard on the pedal and a piece of molten tungsten almost landed in my lap! I turned the current down after that and just went slower.

I also cut the clutch fork apart and re-welded it to fit around the larger throwout bearing. 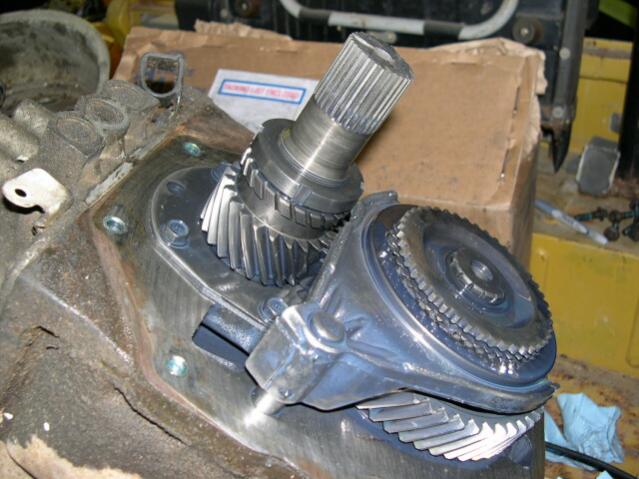 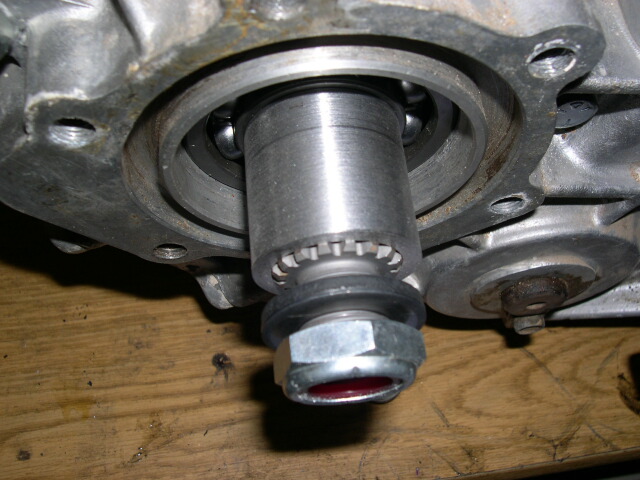 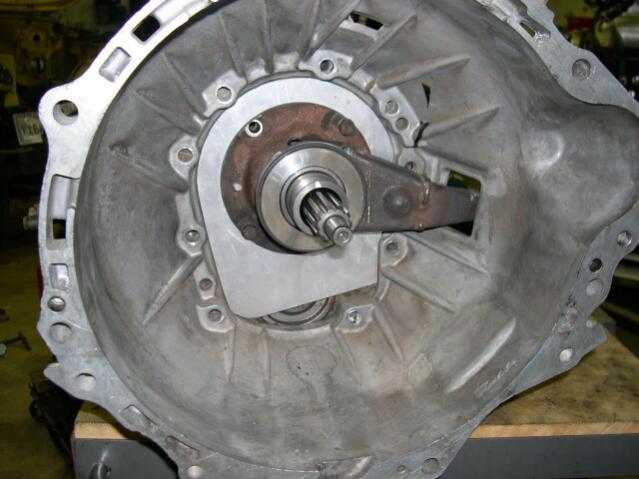 Here are a few of the clutch and one of the motor in the truck. 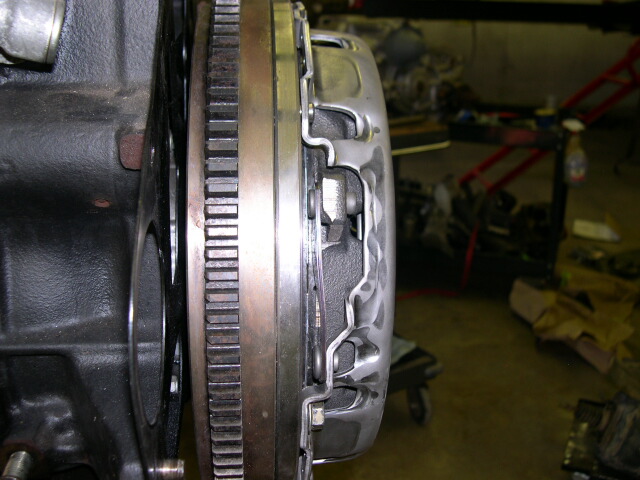 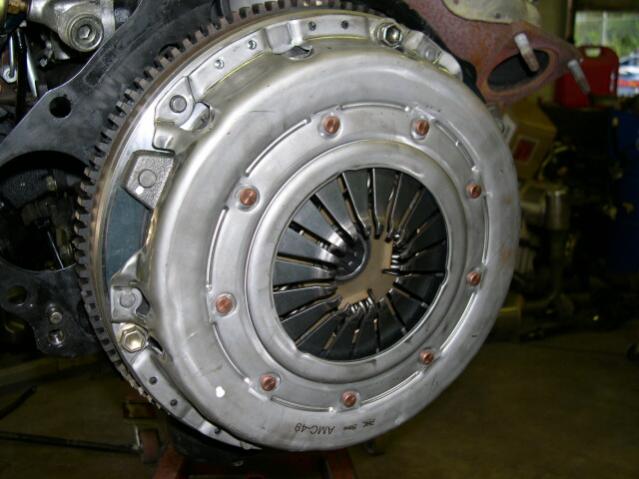 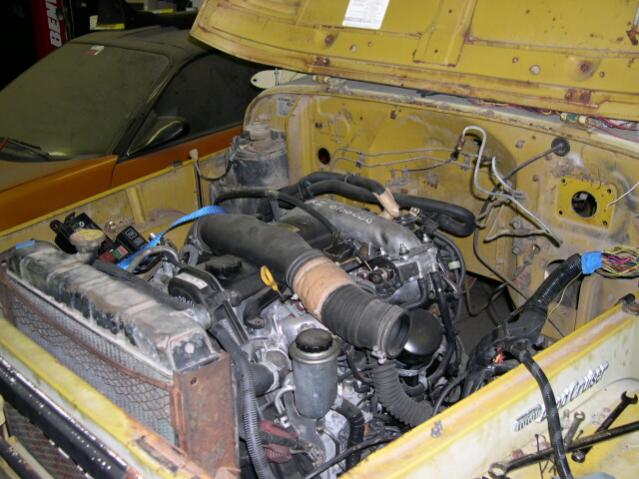