I figure I might as well start some sort of build thread, it won't be much, I'm not going very deep into the beast, just enough to get it driveable and safe. I am leaving the tub alone, short of putting some sort of rust inhibitor on the rusty spots. I really like the paint and the old age patina the cruiser has on it now.

I tackled the interior first, seemed like a logical thing to do, since once it is running, all I will want to do is get in and drive it. Started out gutting everything inside. The seats were rotten down to the frames due to sitting outside with no top for years. There was pine straw EVERYWHERE. took the gas tank out to get said pine straw out from underneath it and wondered why there was not a drop of gas in it. Because it has holes in it, lol. Got on the web and ordered up some POR15 tank sealer, I also cleaned up and painted the outside of the tank as well. I have not put gas in it yet, hope the POR works.

The floors in the rig are very solid, no rust anywhere except behind the footwell front brace. scuffed everything up with a wire wheel, acetone cleaned everything, and coated everything with black Hammerrite paint from Dale's paint. This product turned out OK, but it seems to chip pretty easy, and took three coats before the "orange peel" went away. I coated the inside transmission tunnel on the bottom edges with POR15, I like this product much better.

After everything was back together, I scoured the junkyard for some suitable seats. I found some Honda Accord buckets in gray and pulled two drivers and one passenger side seat. I will be installing two front seats and one rear, behind the driver for Claire. I liked the seats because they were low and had built in seat belts. I got matching shoulder harnesses from the same vehicles that I will tie into the roll bar. The frames were chopped up and new ones built from 3/4 box tubing and 3/16 steel plate. Everything was welded together and painted black to look nice. After looking at some carpet kits online, I decided to go to Wal Mart and buy some cheap gray indoor/outdoor carpet and cut it too fit where I wanted it. You can shape the carpet with a heat gun and actually make it look very nice. The wife approves. 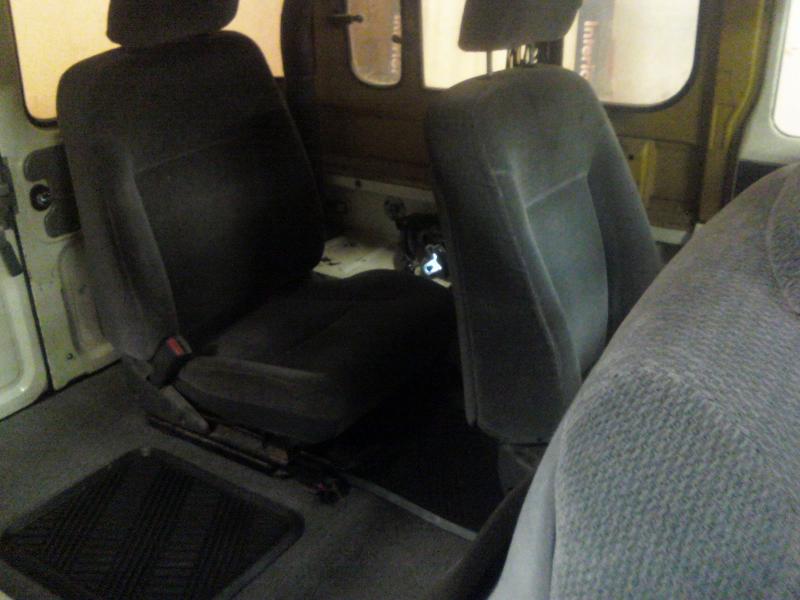 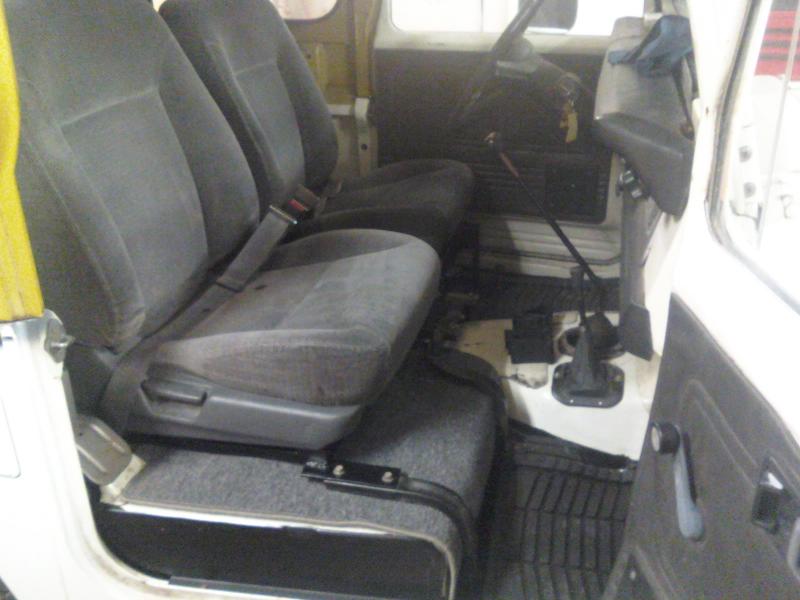 Next up is the engine bay. I called Mark's offroad for a carb kit, only to find out that he says they are so hard to get, he is keeping them for his own future use. Called NAPA and found they have since quit selling and carrying them also. Called Kurt at Cruiser Solutions and walla! he has them in stock, along with secondary diaphragms. Ordered up a set as well as an air cleaner, since mine was almost completely eaten by thousands of moths. Had to vaccuum the critters out of the air box, as it was almost full of them, weird huh? Mice had eaten a bunch of the wiring in the engine bay, but luckily, most of what they had eaten consisted of the wiring for the tailight harness someone installed to tow the cruiser behind a truck. Also a bunch of vaccuum lines.

Speaking of vaccuum line, I started researching if you could get your hands on factory style vaccuum line by Toyota, as it is vastly superior to the junk you get from the auto parts retailers. I refuse to put that junk in my rig. I found out the part numbers where you can order lengths of hose, but it's limited in length and costly. After a little debate, I decided to go with silicone hose. I like it very much and think it will hold up very well to heat and age. I ordered 30 feet and only have 5 feet left . After much debate with myself, I have decided to keep my smog equiptment...for now anyway. This is mostly based on Justin's '84 rig, we desmogged his carb and gained nothing in the way of power.

So now the cylinders have been soaking in Marvel Mystery oil, this week I changed the oil and pulled the distributer to prime the oil system. That little bolt under the dizzy is a bear to get to, so I built my own 12MM distributer wrench. Had the wife get in the cruiser and watch the oil pressure guage, it went well more than half way with a drill running the oil pump. I'm pretty happy about that. Also, while the oil in the pan was very black, there was no evidence of water what so ever.

So here I am, I have the carb removed waiting to be rebuilt, some hoses on the cooling system to replace, and then hopefully, she will come back to life. I am feeling like I should replace the fuel pump too, but I will see if the original works first. Hey, a guy can hope right?

Carb pics. My secondary butterfly is completely frozen. That will never happen again as long as I own it. I intend to open that secondary a lot 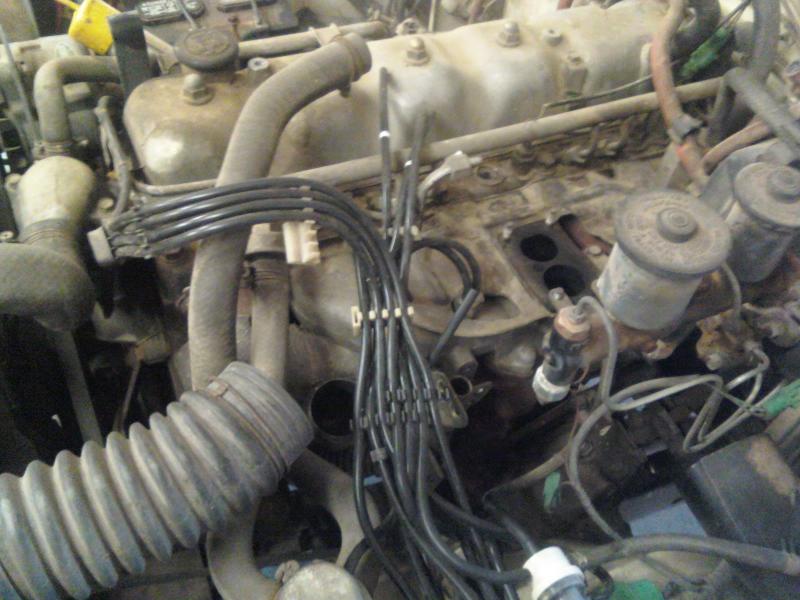 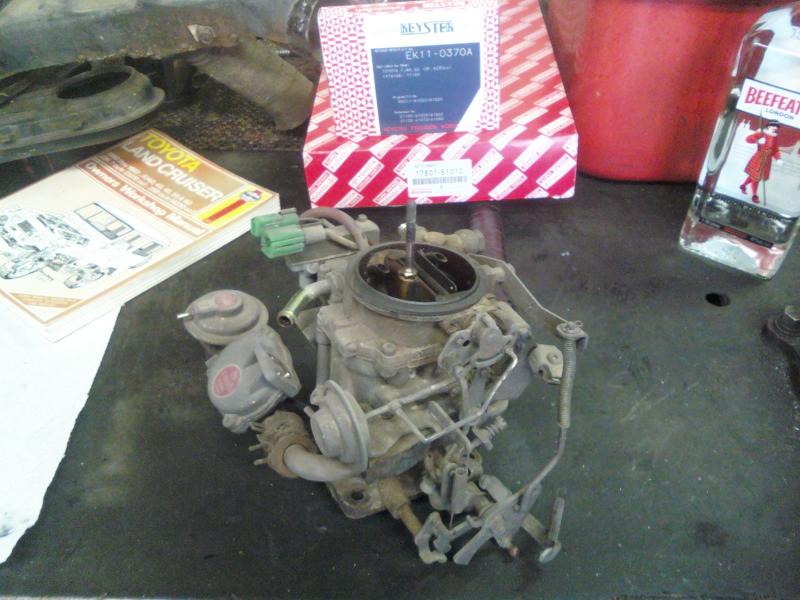 I forgot to mention I almost had a major setback. I am ordering a 2 1/2 inch lift from Hell Creek because I don't wish to go any higher than that, and want to stay with 33x9.50 tires. Well....they don't make 33x9.50 tires anymore.

! My factory skinny rims are already at the powdercoater getting baked with some factory gray. And my hubcaps are shined and waiting. Then I decided to go 33x10.50 because they are still available. Called Big O tires to order a set and

! They don't have them anymore! What the hell am I gonna do with factory 5.5 inch wide rims!!! 31 inch tires are NOT an option! lol, wouldn't mind going with 34x9.50 "chainsaw" swampers, but then I have to go 4" lift...also not an option. 'sigh' Called Discount tire...Not only to they still carry 33x10.50 BFG's, they have them IN STOCK!!! I feel much better now. At least until the tires wear out, then I will have to make another decision. Stupid NTHSA is attacking high sidewall tires because they are dangerous....boo hoo, cry me a river. Anyway, going to pick up the tires this week
Last edited: Mar 5, 2011

I like the pre-positioned supplies for the carb rebuild.

That 40 is going to very nice when Luke's done!

Corpolite said:
I like the pre-positioned supplies for the carb rebuild.

yup. The Beefeater was my wife's anniversary gift, I just set it there, funny it made it into the pic. 7 years! I can barely stand myself after that amount of time. haha. Love you honey!

Looking good Luke, uh the 40 that is . Can't wait to see it out on the trails.

Really excited to see a thread on your 40 Luke. I'm green with envy.

One more thing to consider putting on your list: See how strong the air blows out of your heater and defroster. It is very common to get straw, dog hair and other debris packed into the heater box so tight that it greatly restricts the air output. Plus the foam from the factory rots, adds further blockage and stops sealing. With sitting exposed for years and the mouse infestation it seems almost inevitable.

You can get the rebuild kits from one of the guys here on MUD ($30?) and it's an easy Saturday afternoon project. It makes a huge difference in heater and defroster performance.

Nice work! I've been going through a similar process, only a bit more in depth on the build...not a complete frame off, but close. I am like you...2.5" lift and hopefully some sort of 33 x 10.5 tires afterward so I was interested in what you mentioned about your tire difficulty. So far I have mine pretty much gutted and stripped...soaking the mounting bolts so I can get the body off. Mechanically mine is good...just new seals and busy work to stop a few leaks. I'm still a long ways off from getting mine trail ready...but I'll get there. I started a blog about my build and plan to turn it into a book to show with the car if/when I ever show it. If I have any questions I'll let you know...this is my first big attempt a project like this...so everything is a learning experience! Kyle's Landcruiser Restoration


Good Luck on your build !

! I just bought my 33's Friday and was panicked! What if the 3.73's could not pull 33's well enough? Jacked up my 'Cruiser and checked my ratio be turning the driveshaft with a mark on the wheels and the driveshaft. And as it turns out, I have 4.11's Whew! Crisis averted.

But the reason for this post, My front driveline has MAJOR amounts of slack in it. It feels much like there is an automatic locker in there, but the wheels still spin opposite directions when the driveshaft is held still. Anyone know any reason for this? Is there something I don't know being a '40 newbie? I really didn't plan on tearing into the front axle, but it's looking like I might have to.

Carb rebuild is well underway. This is going to be a breeze. I am pretty surprised how easy everything comes apart, and from the outside, it seems like a heck of a lot of parts....but it really isn't bad at all. There was a dirt dobber nest taking up just about the entire vacuum secondary housing, thought that was pretty funny. Glad I ordered a new diaphragm. Just have to find a can of carb dip and things should be back together and running in no time! 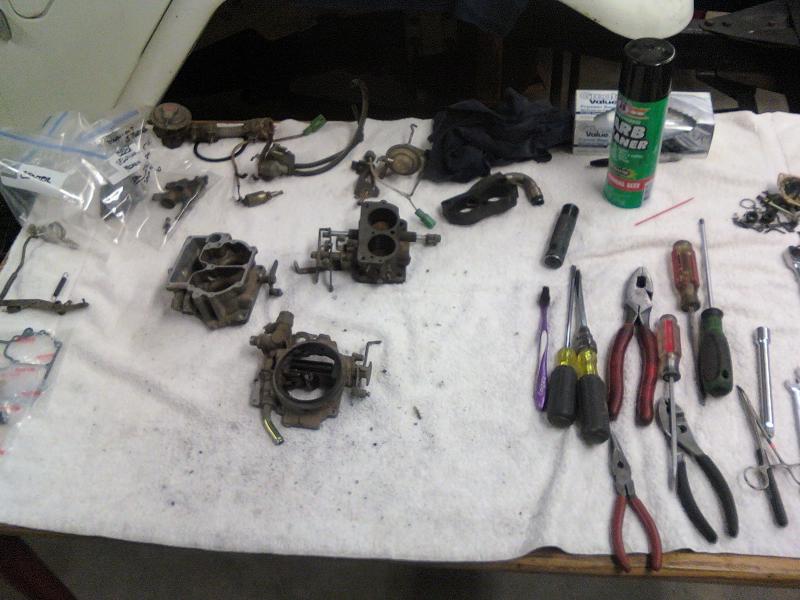 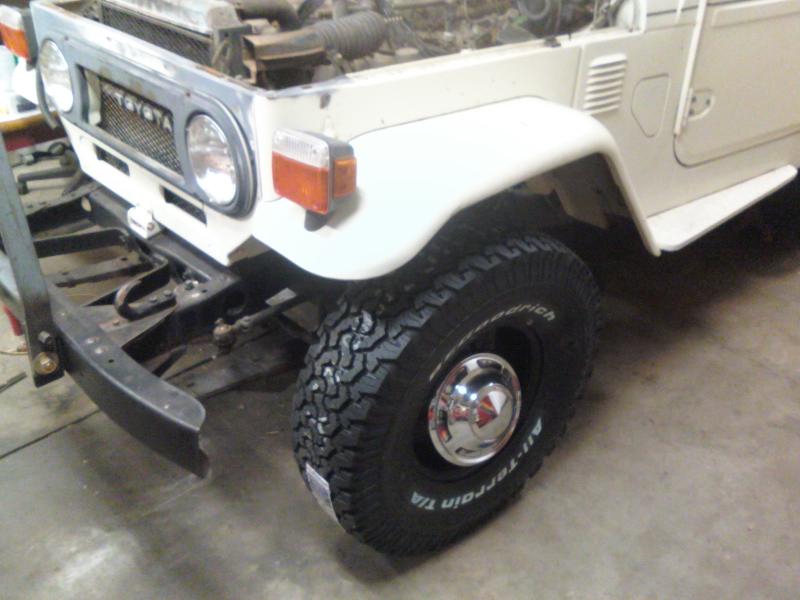 Keep up the good work!

Finished up the carb last night. it's all shiny and pretty and ready to go. That job is so ridiculously easy, I just can't believe people pay to have it done.

Pulled the carb spacer and heat shield to clean everything up, and once again, more bad parts.

Found out the my cruiser came from California and brought half of the San Andreas fault with it in the exhaust manifold. I have never seen a crack this large in anything! Bummer. I knew everything was going to well. So now I'll have to go farther, and spend more money.....such is life with a 40 huh? Oh well, need to check that heat riser flapper thingy anyway.
Last edited: Mar 17, 2011

Before you start spending money--I have an F exhaust manifold in my garage I can bring to you on Saturday. It looks like it's in good shape aside from the heat riser flap thingy is frozen. No cracks tho....

Anyhow, you can just have the thing if it will work for you.

That would work. Should be the same. I am going to pull mine and put a good sized V groove in it and weld it up. Have researched it on the net, people seem to be having good luck welding cast iron with a MIG welder. I think it's the fact that you are mostly just sealing a crack, not depending on it to hold any stress. Nothing ruins a cool ride like an exhaust leak....I just can't deal with that.
You must log in or register to reply here.