Wanted to get a thread for folks to check in if they're going. I'm recycling much of this info from previous trips.

Meetup point:
Cook City Exxon on Main St. and Eaton St. It's on the east end of town and the last gas station before you leave town towards Beartooth Pass.
Plan on departing the Exxon at 10am. That should give folks leaving Bozeman on Saturday morning a fighting chance. Otherwise getting into the Cooke City area Friday night is a nice option too. There is a good amount of camping around but check into it before hand as some campgrounds, like Soda Butte, can be hardside campers only, and also many could be full this time of year. There is also dispersed camping up Daisy/Lulu Passes.

What to expect:
There are no services outside of Cooke City so come prepared for unsupported travel and camping.
The trail is rocky and slow going. Some extra ground clearance via lift and/or oversized tires is needed.
We will also follow proper BEAR COUNTRY practices and bear spray is needed. I mean it is the BEARtooths after all...

So who's planning to go?? And when are you heading out?

2019 Thread HERE is the thread from last year

Some other beta from Lax:
"All right guys, here’s what I know... The trip can absolutely continue as scheduled but we don’t have anyone to lead the trip, at least none of the board members. Work conflicts and some folks out are out of town...
That shouldn’t stop the trip from happening if there’s anyone who knows the trail and is willing to play tour guide. Honestly with just some map work anyone could locate the trail and be fine. The first time I did the trail was solo with some maps. There are also gps tracks available from past trips. I’ve also been told there will be another group of 4x4’s, possibly two, heading up that trail this weekend.
My recommendation would be to coordinate when folks are leaving, Friday night or Saturday morning, and set a meetup point in Cooke City Saturday with enough time for everybody to get there, then head up Daisy and Lulu Pass towards the trail. It was less than 4 hours on trail to Star Lake, the 4th of the 5 lakes along the trail, where we have camped in the past. Goose Lake is the final lake in the string and the end of the trail, and the only hard section of the trail is the hill between Star and Goose Lake."

I'm not planning to be team leader, but can be if necessary. Admittedly I have not been up this trail before.

I sent you the track from last year.

Well if anyone else finds themselves in Cooke City, I plan to run trails Sat and Sun.
I won't bother with stopping at the Exxon at 10. You can find me on the ham.

Got to cooke late afternoon on friday had planned a 5-5;30 meetup with Sam and the boys, that ment about 7 in mountain time so by the time they got gassed up and ready to go it was around 7:30 pm. Aired down at the trailhead probably took another half hour so i suppose you can see where this is heading. The trail seems a lot rougher this year, made it to round lake when I had a light flashing and temp gauge was pegged. By the time it cooled off enough to drain fluid and pull the thermostat we were using flashlights. Found the tstat was stuck closed of course so tossed it in the trailer, everything was running good and cool so kept on going. Running the upper half of goose lake is kinda a challenge in the daylight, darkness adds a whole new perpective. Was almost ready to drop down to the lake when my darn elect fan quit so heated up again, finally made it to the parking area around 11 and no one was there camping! The kids got up on time and headed for the glacier, Lori and I and Pete hung around the camp on bear guard and did a good job as no bears. Rimrock 4x4 showed up so I had a good bs session with those guys, they're doing the middle fork of the judith around the first of october. lots and lots of side by sides and then Matt(90wt) showed up with the family, he left his truck up top not feeling comfortable being by himself of getting back out. He should have ran it in the dark so you have no idea what you're getting yourself into lol.
Had planned on meeting Jason around lake abundance sat afternoon and camping back there but with the troubles decided I'd hang with the boys and come out today. Talked to matt on the 2meter this morning, he was on sheep mountain and i was down in a hole bouncing along he was talking to jason so i had him relay why i hadn't caught up with him. Everyone needs to have a 2 meter! Left the boys and decided to just head for home when the fan quit again, pretty sure it's the auto reset circuit breaker as if i turn the key off and back on it's running again why didn't i try that in the dark. No other excitement saw a few buffalo and made it back home. Saw Earl from bzn transmission camped on the trail this morning so got to yak with him and his wife for a bit. Get out and enjoy it before the fires start guys

Goose Lake trail is one bumpy son of a gun, but worth it. Some spectacular scenery in the Beartooths. Yep, about a half mile from the end of Goose Lake Trail, a section with a big ol' rock had me scraping. Mrs 90wt reminded me we were a group of one, with both kiddos in the car. So we opted to walk the last half mile to say Hi to Ron at trail's end and let my puppy run amuk. (@elkun1 Glad you made it back to town ok). Saw a Cherokee on 31s that made it over. Can't image what that sounded like. Lots of water crossings on the trail made for some fun driving. On Sunday, we looped Daisy Pass, Lulu Pass and ran up to Sheep Mountain. (Thanks @ttFJC for the track!) Its an easy drive with lots of mining remnants to check out. Halfway up Sheep Mountain we heard Jason and Ron on the Ham. Met up with Jason on Sheep Mountain and talked with him a bit. Even met Sam on Sheep Mountain, whose group showed up about an hour after we did. Monday was a hike to Lady of the Lake for a little fly fishing. Some mighty fierce little Brookies up there! Fun weekend. Saw the Standard Montana wildlife: Antelope, Deer, Elk, Bison, Moose, Bear, Texans. Cooke City was busy, but plenty of camp spots to be found a few miles up the road, away from town. 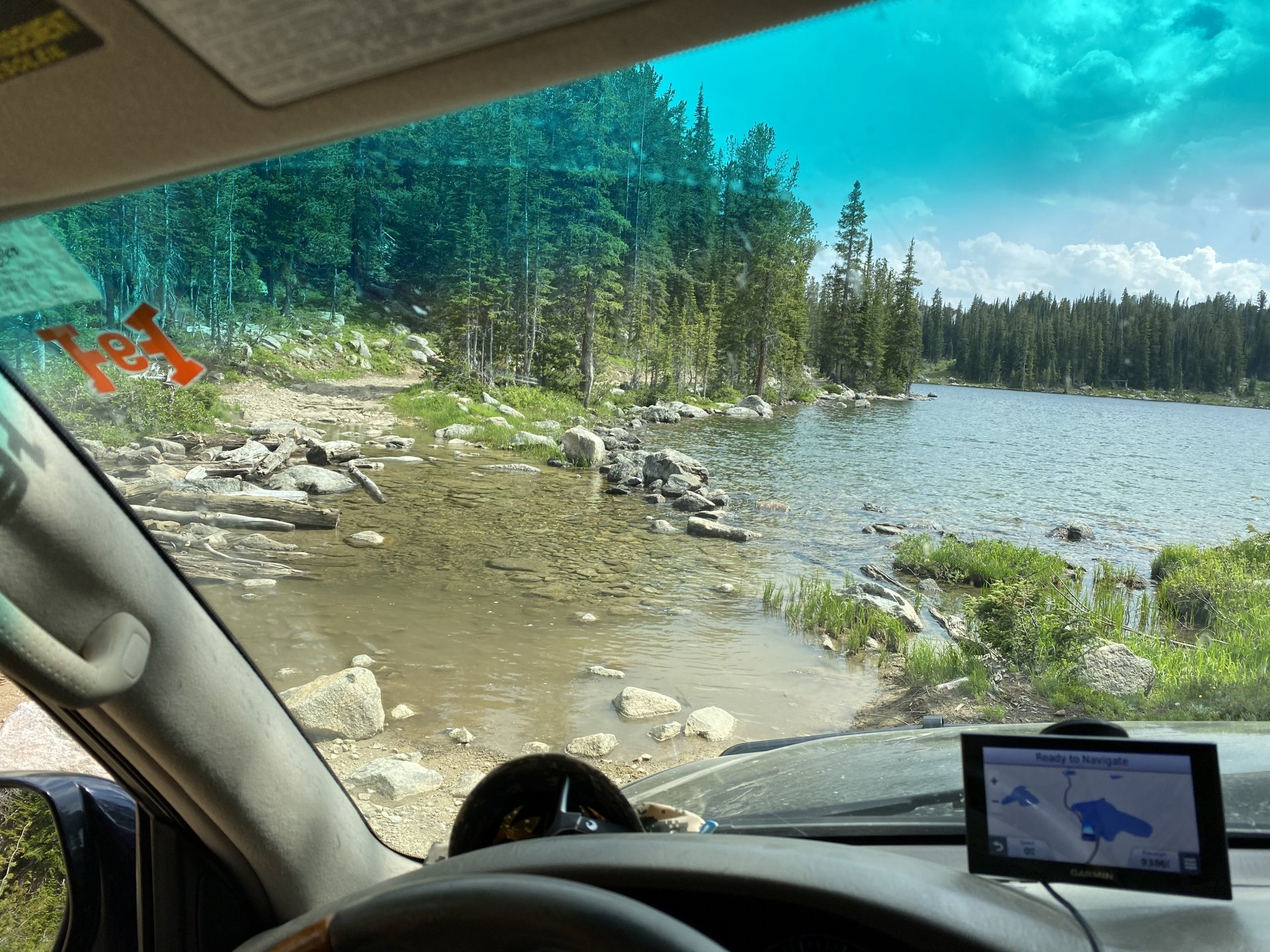 The trail section that stopped us from making it to the end: 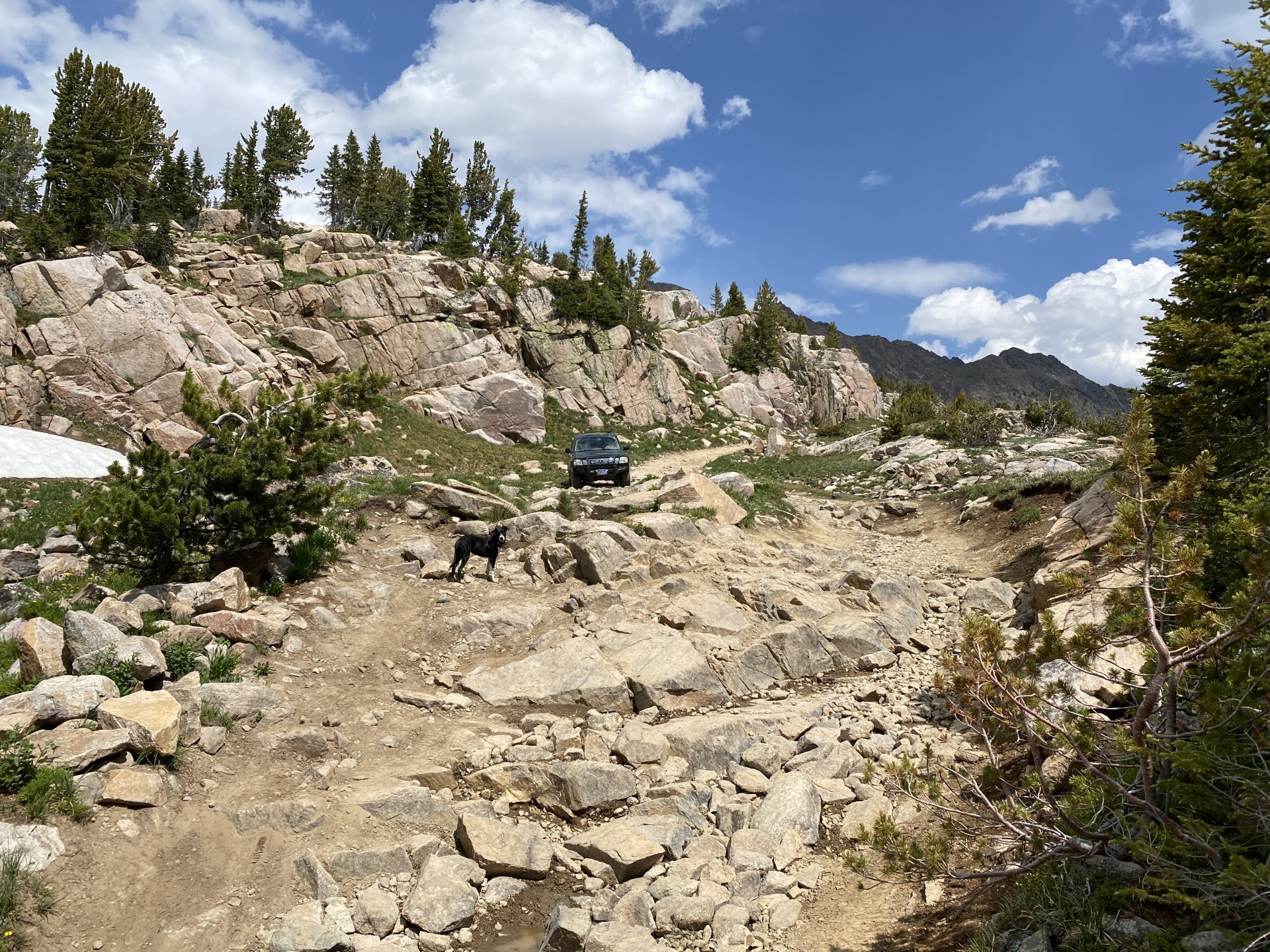 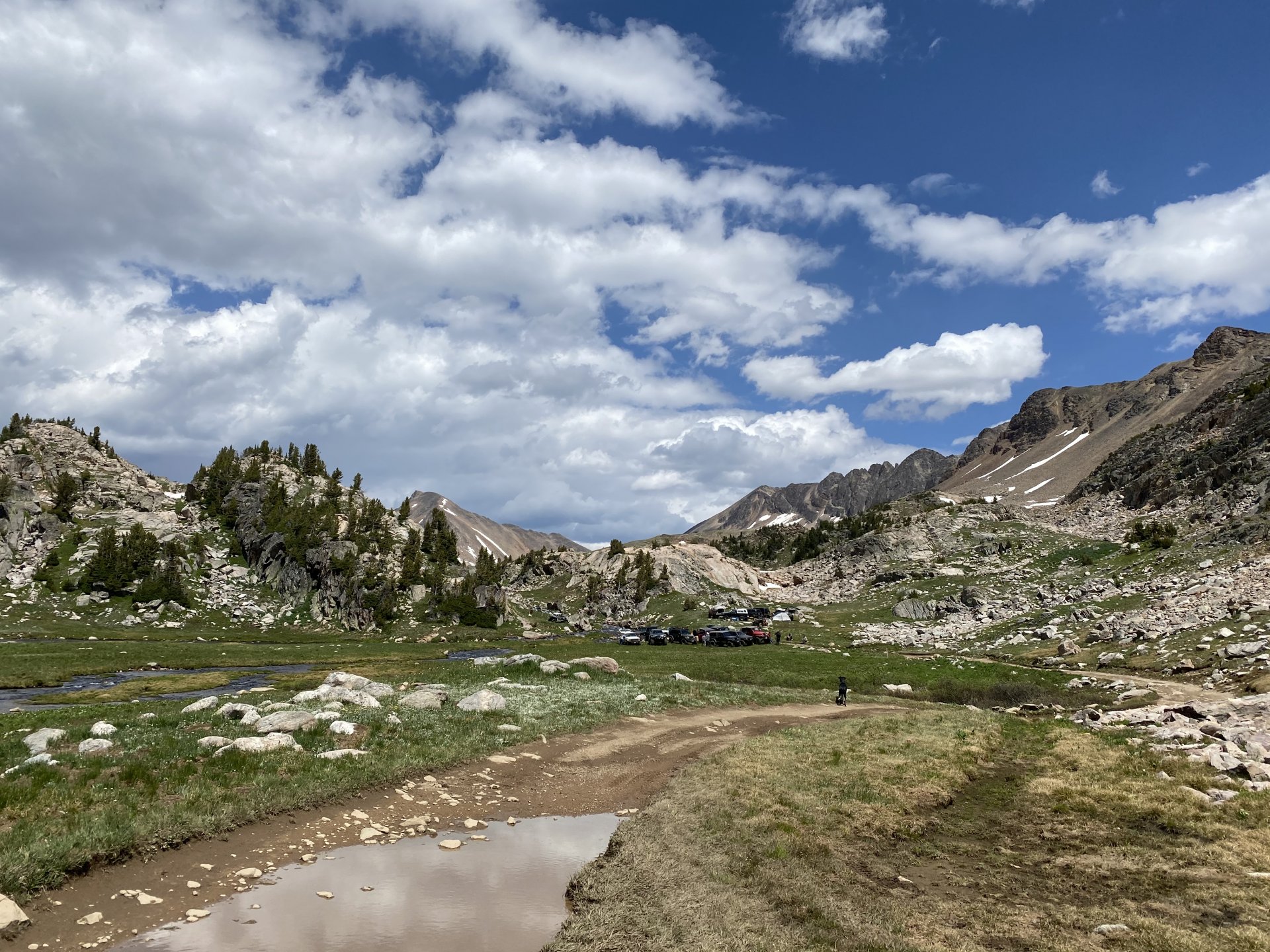 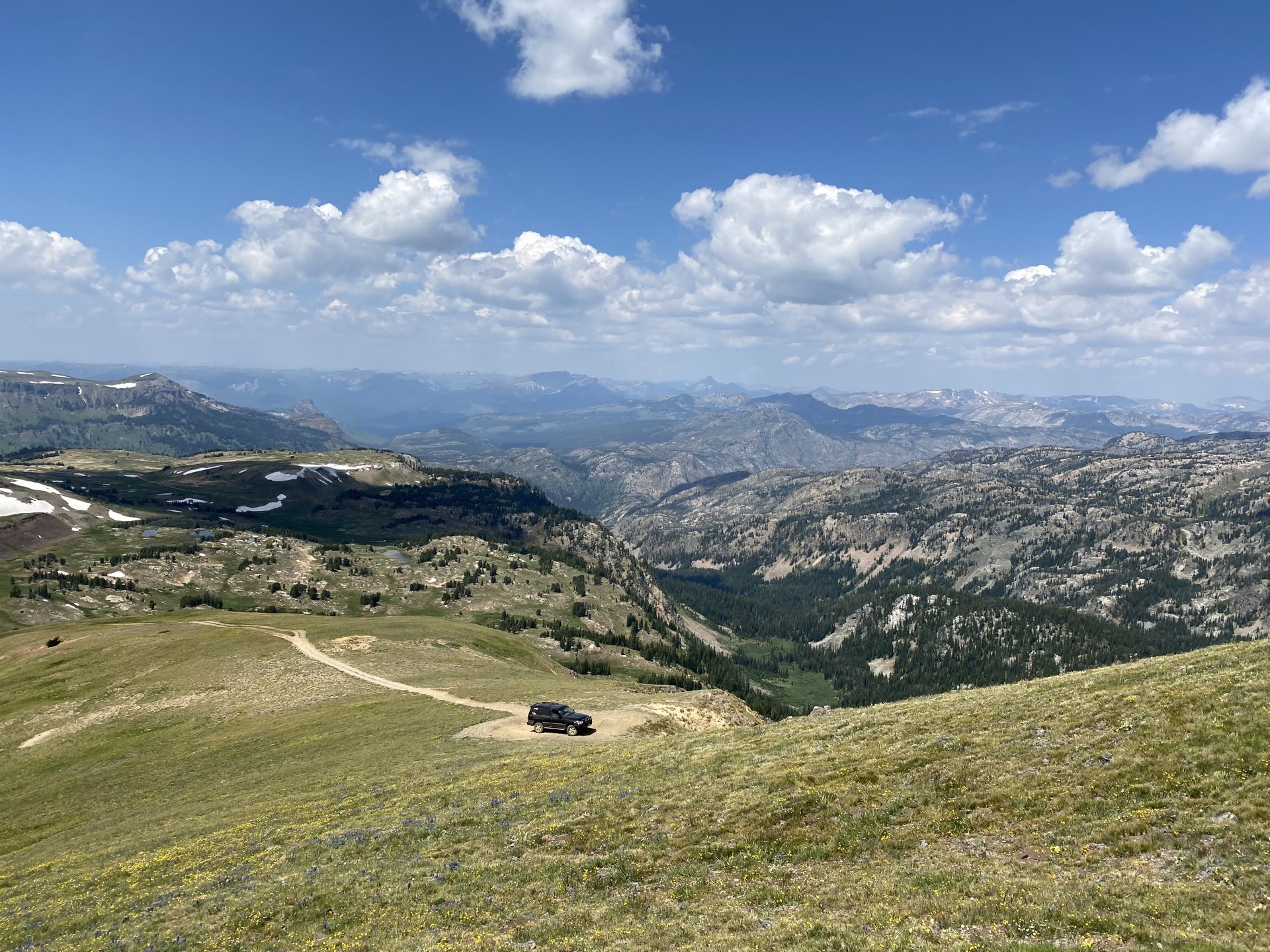 What an amazing adventure!

We were up there for a few days in late July. Surprised that I missed this group. Trail seems to be getting more and more rocky, rough and bumpy over the last few years. The rock obstacle before you make the final turn to the park/camp area below the lake is big enough that I used the rear locker on the way in and on the way out. You pretty much have to go right over it to avoid the off camber section alongside it and the off trail section that the sxs's are creating on the other side. Still one of my all-time favorite trails although you're basically rock crawling from Star to Goose now. The fishing is almost not even fair in the cascades below the lake and the beauty is unmatched. We were solo up there (my 13yo son and I) until a Rubicon and really nice J10 came up to camp.

No bears, (we've actually never seen a bear up there in 10 years) but we did see a beautiful bald eagle flying low over our heads. The absolute biggest grizzly I've ever seen in my life was right down at the bottom of Lulu, just across the road though. 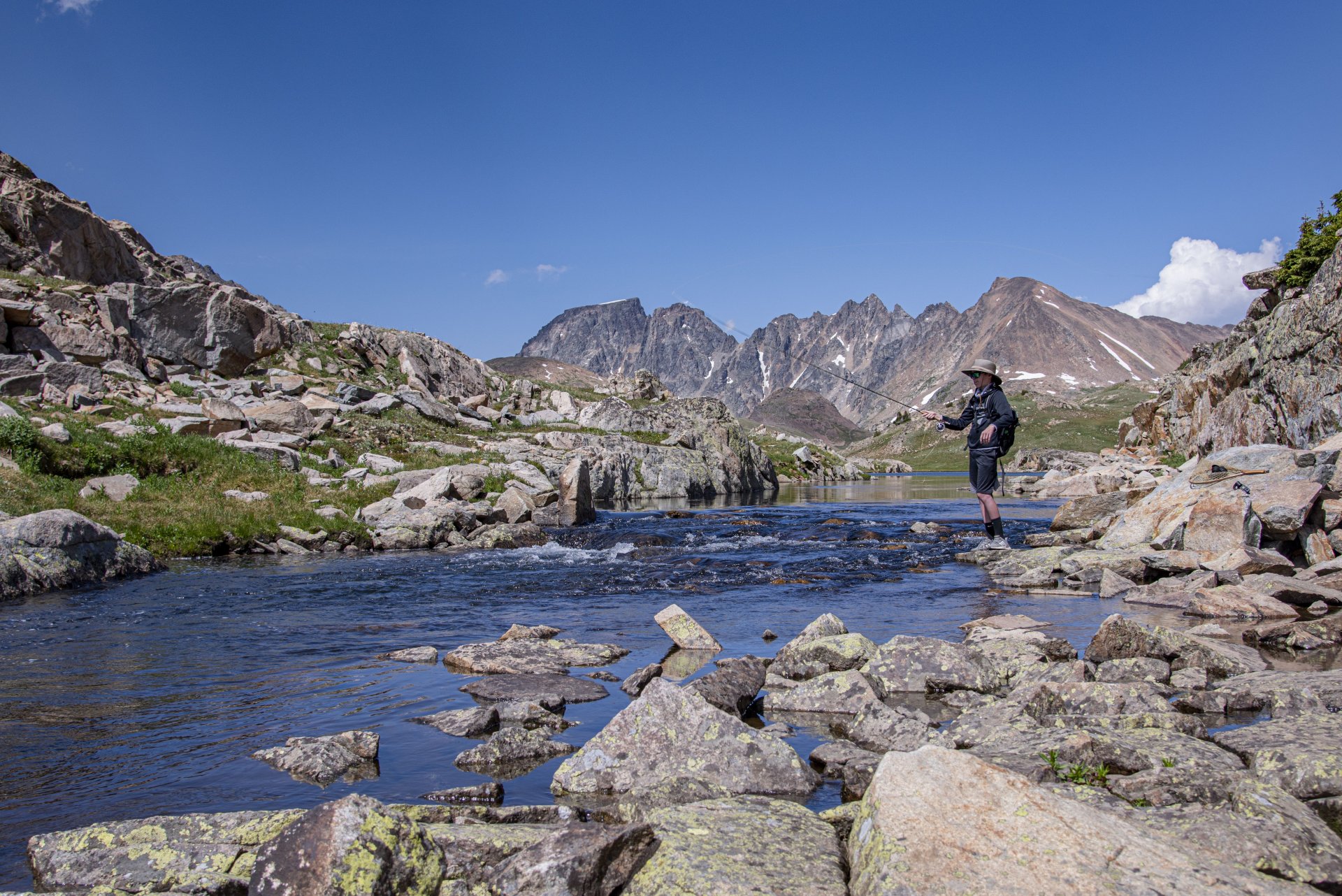