I'm assuming the 3rd row seats in the GX460 are no longer removable in a similar fashion to its LC200 and LX brethren.

Since these are power seats, how hard is it to unbolt the seats? It's been done on the LC200, but how about the GX460? Does it look clean or are there big holes?

Ha, nevermind. I just saw that they are fold down flat into the floor seats like in the 4Runner. No way to remove at all.
T

It has been done on the 5th gen 4 runners.
T

Here is a write up on how to remove the third row seats on the GX460: http://www.clublexus.com/forums/gx-second-generation/738357-3rd-row-seat-removal.html
T

Any on the Prado: http://www.clublexus.com/forums/gx-second-generation/746539-photos-gx460-prado-without-3rd-row-seats.html

Like some other GX owners (and the original post), I was interested to recover some of the height and remove the weight of third row seating (that I could not imagine ever using)....

I like the Goose Gear solution, but didn't want to spend the money - and wanted the satisfaction of doing it myself (with talented son). I also want the flexibility to remove the platform and modify it as I learn more about how I use the truck. Driver's side will have oversized spare tire storage initially, and would be location for fridge enclosure mid-term.

There are a number of great resources, I referenced the work of Pachari Adventures on youtube for removal (he does a good job of sharing bolt size and showing locations) and then de Winj family (Australia) "Getting Liam's Boot Ready" 28 Feb 18 for install < Getting Liam’s boot ready >

Removal went pretty easy. The seat assemblies pretty heavy for being so compact. 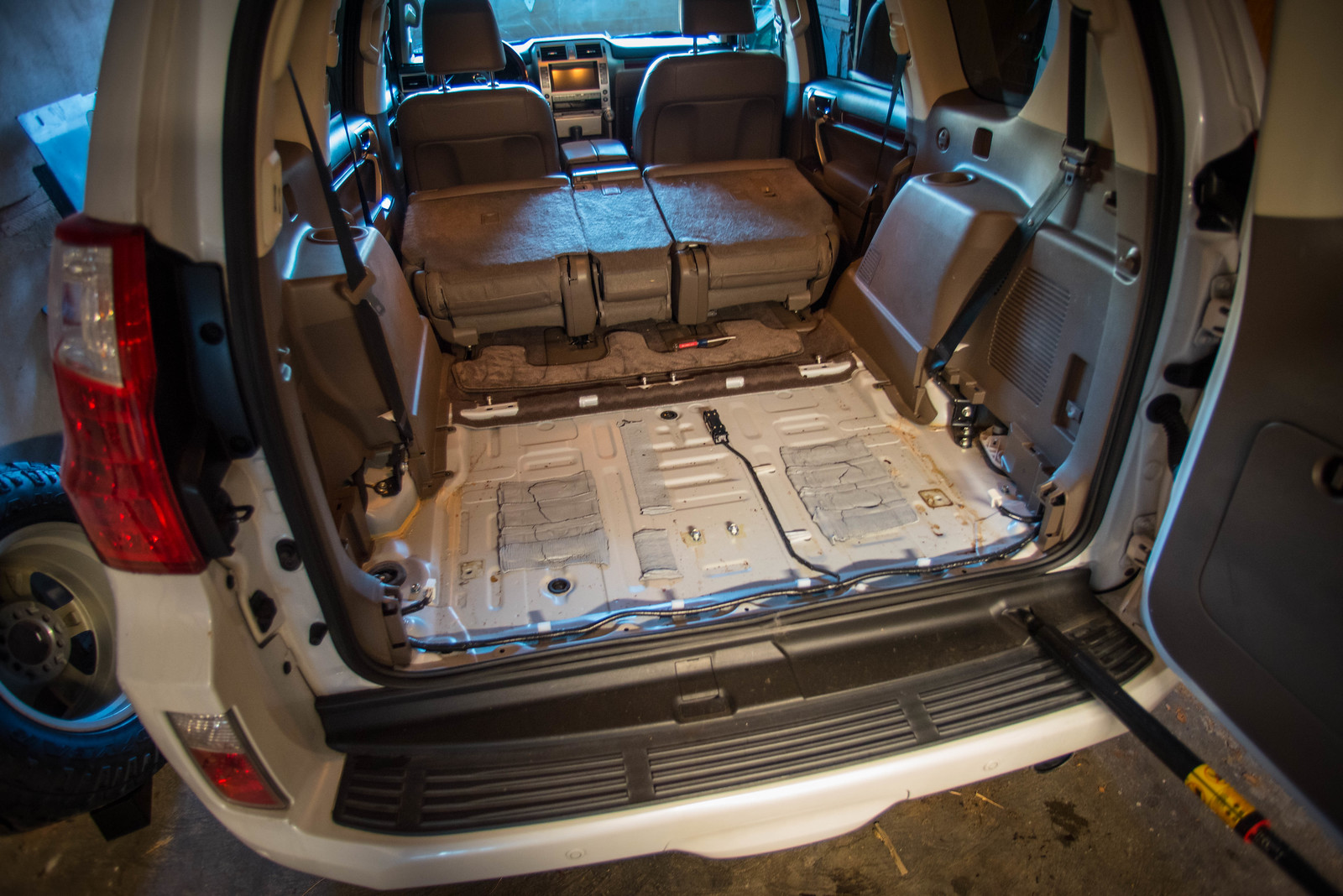 For platform assembly, I bought 3/4 inch ACX plywood (sanded one side). Like the Liam build, I used one rectangular piece and used ribs underneath. I used three ribs (instead of four like Liam) : one just inside the rubber seal (3/4 ply in one inch strip), second across the four visible bolts (2x2 with cut outs), and third on carpet beyond the ridge (3/4 ply plus 1/2 ply). I took some time with a random orbit sander to get this smooth(er) and reduce chance of splinters when handling. At this point, four 2.5inch bolt in the second rib hold the deck in place. 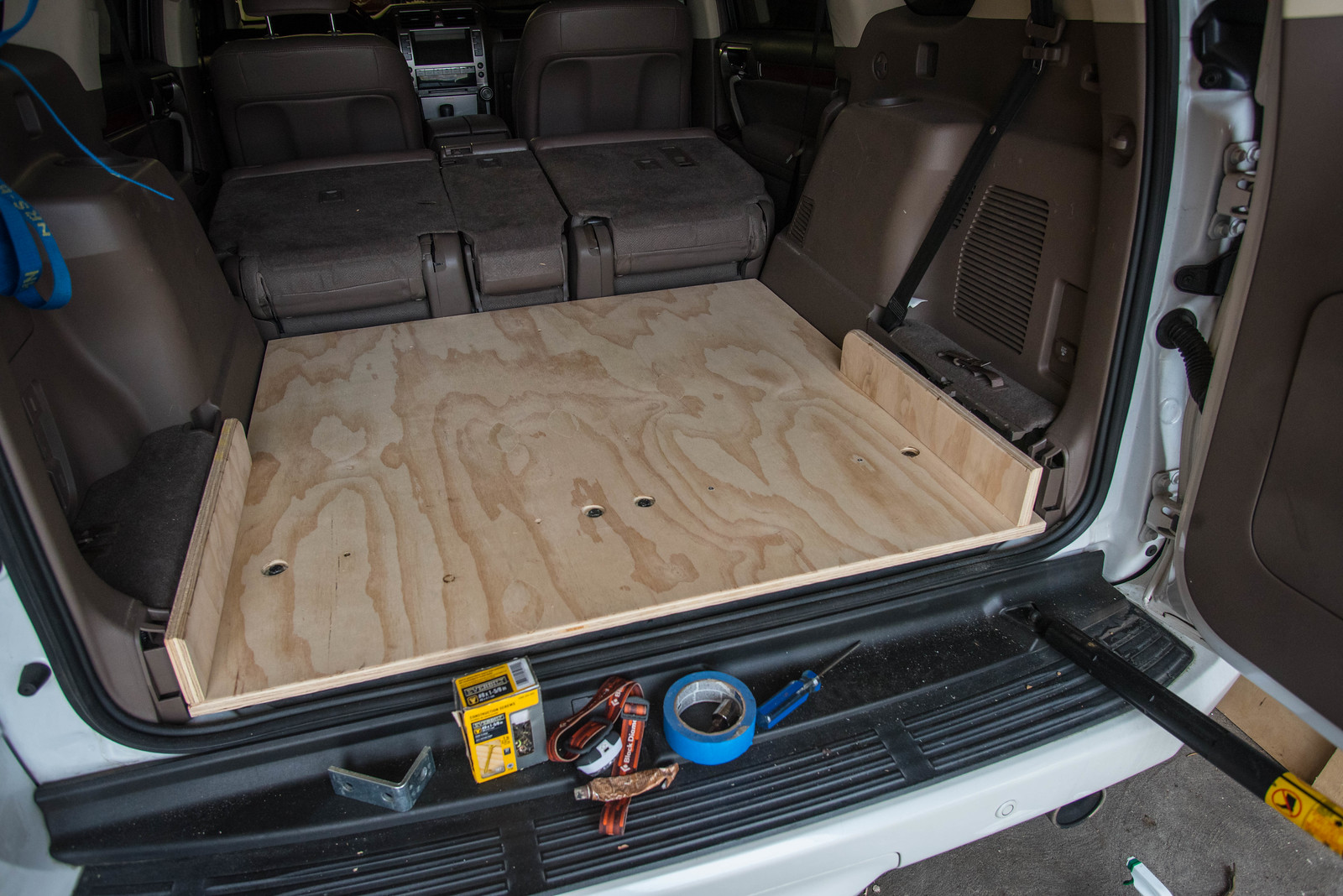 Next steps will be to install the wooden vertical sides (probably with L brackets in a routered channel). Found some 5mm rubber exercise equipment matting at home depot that will likely go on top. I also have recessed L-track from US Cargo Control on order (and will router a channel for that).

If of interest to anyone, I can post more pictures once the rubber matting and L-channel are installed.

Did you have any issues with any airbag lights or anything after removal? I plan to do this to my 2013 GX bc I can't justify $500 for a pre made plate when I can do this myself and then drawers for a fraction of the cost. Thanks

You will have air-bag light if you remove 2nd row. I haven't heard of any issues on 3rd row. Also don't remove that wired sensor in middle of 3rd row. That is one of the keyless entry sensors.

Largely finished the cargo deck this weekend - I'm pleased with the outcome for the configuration I'm planning....

As 22Eyunu noted, no airbag lights with third row removal (and I did leave the keyless entry sensor in place).

If Overland = Overkill, I think I've built a solution that thousands of possible configurations, and is plenty burly... All the aluminum track and track fittings from US Cargo Control.

Image 1 on sawhorses - with lots of hardware in tracks. 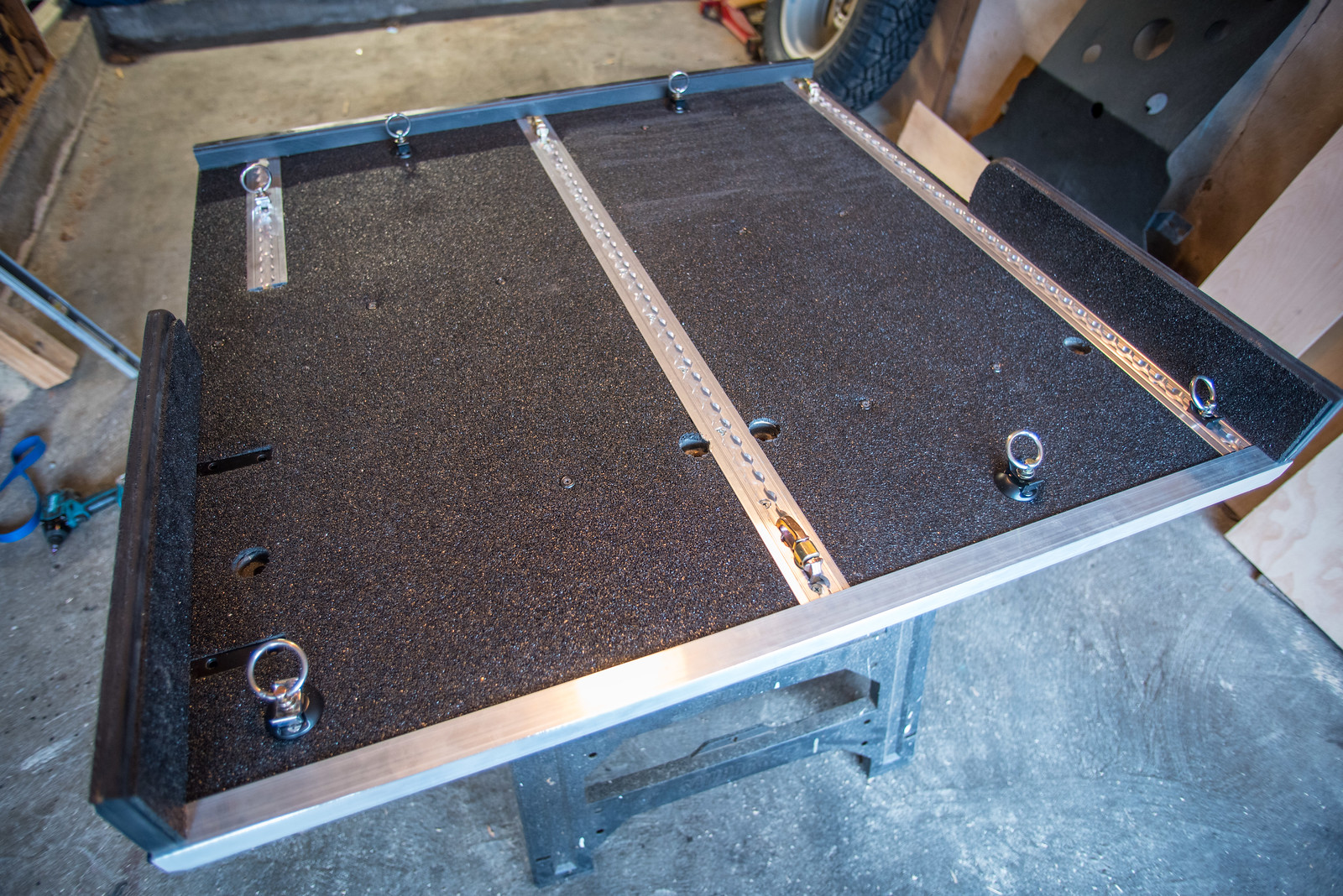 Image 2 installed. I built driver's side a bit custom to store oversized spare in near term - and have option to add fridge longer term... 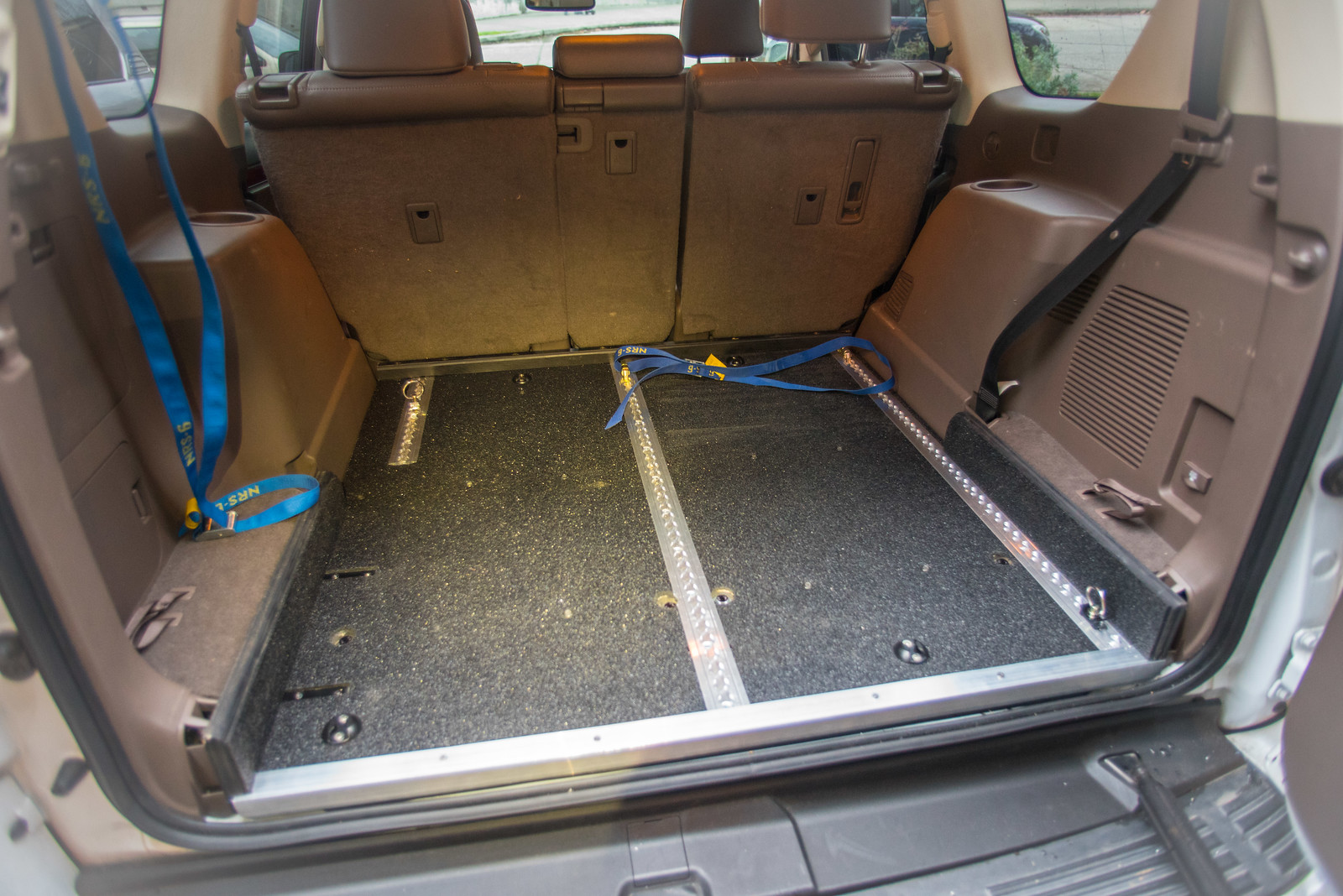 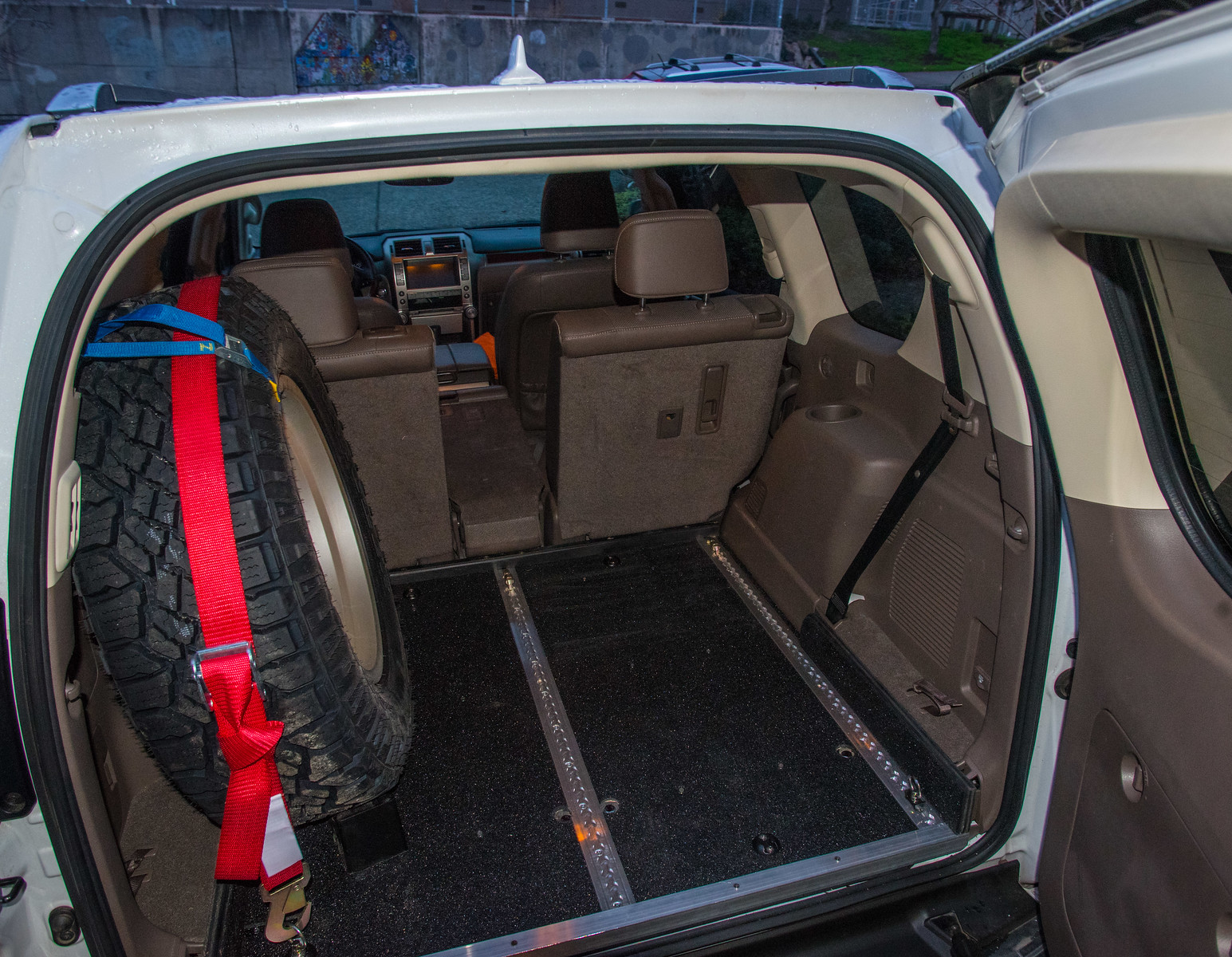 Happy to answer any questions.
G

Links to the materials you used? Saw your post on GXOR, so ignore my question there haha

A flanged edge design allows for a recessed installation, eliminating abrupt edges on the surface. This flush-surface benefit makes it ideal for securing motorcycles, ATVs, garden tractors, utility carts, etc., where wheels are rolled over the track. The heavy-duty track is manufactured in a...

PS - San Diego sounds lovely now from a gray 50F (yet no snow in mountains) Seattle perspective... I was based at Miramar for a spell (way back when it was a Navy Master Jet Base) and lived above UTC...

You need to remove that spare or get a better way to hold it down. In the event of a accident it will seriously hurt you or other occupants. That ratchet strap will not hold it in place.

ChiTown - Thanks for input - and I see from your signature block you are working on your own storage project after third row delete.

What options are you looking at?

I'm comfortable with this temporary solution at this point. The 2inch cam strap has a 666lbs WLL, the anchors (with backing plates through 3/4 inch ply) show a 1333lbs WLL.

On my 100 series I have the oversized spare (exterior) on a Slee swing out. I'm not sure I want to go down that path with the GX.

I certainly would not claim this is perfect, but with the second row up I believe this is functional.

Highly functional and can't beat the price either.

@nw_fj62 I am currently working on a set-up but I may just cheap out and get the Front Runner pockets Here
I want something that sits even with the factory plastic trim & 2nd row when folded but hides the storage when not needed to help deter would be thieves.

I'm with you on trying to avoid a bumper with a swing out also. I've gone so far as to price the Prado rear door with the spare carrier (~$1000).
I might have an option coming up that is a bit different in design but no bumper cutting and no rattling hitch mounted carrier.

It's not your strap I'm worried about it's the fact the tires change shape when force is applied. So what is tight now can become loose in an accident due to tire compression. Maybe add a quality cargo cage just in case?
G

Thanks fj62. Looks like a real affordable way to do it. Chitown, what option are you referring to? Is it the JW offroad door carrier?

No, although I do like theirs.
I'm working on something that is a bolt on and reversible. I should have a prototype maybe next month.

Sorry for the Hijack

The Front Runner solution is a pretty good option (and I hadn't seen it prior). Only downside I could see is access to the hidden storage once it is packed up.. similar rail system for load control. I could also see Canadian customs (or more likely US customs coming back) being highly suspicious...

Look forward to see what you devise on spare carry. The JW solution is interesting but... A Prado rear door is more interesting to me, but would probably have to repaint to match the lexus pearl white... And I'd like to have some rear recovery points and some rear protection (just not excited about a swing out for every day access). I did remove the swingout on the 100-series during the winter a couple times...

I have removed the heavy factory hitch (impacted departure angle) and will likely source the light hitch. Would aspire to a long range tank addition in the future for the factory spare location...
You must log in or register to reply here.
Share:
Facebook Twitter Reddit Pinterest Tumblr WhatsApp Email Link
Top Bottom