The 62 is a GXL, so almost all the bells and whistles of the day (power windows, doors, etc...), it had a dual fuel setup (LPG and Petrol).
The original petrol tank was removed and replaced by a Brown Davis belly tank for petrol, and the LPG cylinder took the place of the original fuel tank. That cylinder is now gone as is all the switches and wiring and piping for LPG.
The guy also had a dual battery set-up in it, although nothing but the wiring was left of that, and I've pulled that out too.
The 62 had no motor, gearbox or shafts, Most horribly though, the guy who took the running gear left a mess in the engine bay with wires cut indiscriminately, so I'm in for a bit of extra fun.

Before I go on, I want to share my gratitude with all the folks on this site as the information here has been invaluable already. Special shout out to Baron FJ62, and massive thanks to Tofudebeest for your write-up many years ago.

I will definitely be calling out for lots more help along the way, so thanks in advance to all.
I'll get some pics up shortly, but right off the bat, my first goal is two-fold:

1. Get the engine bay to a base starting point for the conversion - i.e remove anything that's related to petrol including vac lines, hoses etc...
2. Study and master HJ60 and FJ62 wiring back to front, and try and identify every single wire in the looms that have been hacked.

Hope you enjoy the journey with me!

Definitely considered it, but the chassis on the FJ62 is better, especially around the rear area where the reinforcing channels are riveted into the chassis
So I'm going to labour down this path.
I

Ok, so here are a couple of pics of what I've been left with as far as hacked wiring goes....
I'm pretty sure these are all carby related, but if anyone can clarify that would be great. 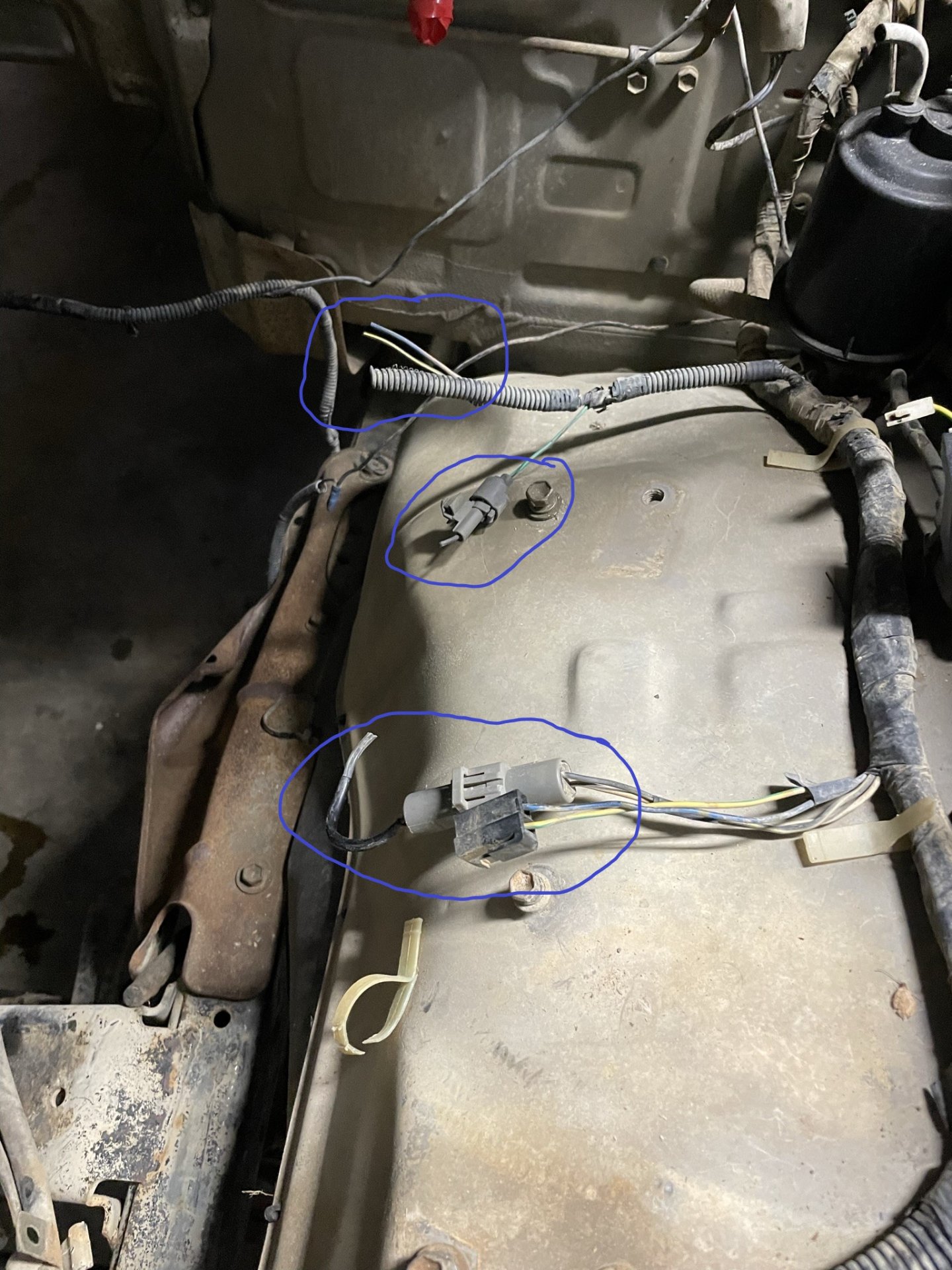 This one here though has got me a little stumped. I know it goes down to the gearbox area, but it is really difficult to align any wiring diagrams with what i have in hand.
As Baron FJ62 has pointed out, the loom isn't necessarily continuous into one connector - it likely splits out along the way into various connectors. Nevertheless, this will test the best, if you can help out to identify that would be great - pictures of the relevant connectors would help too. 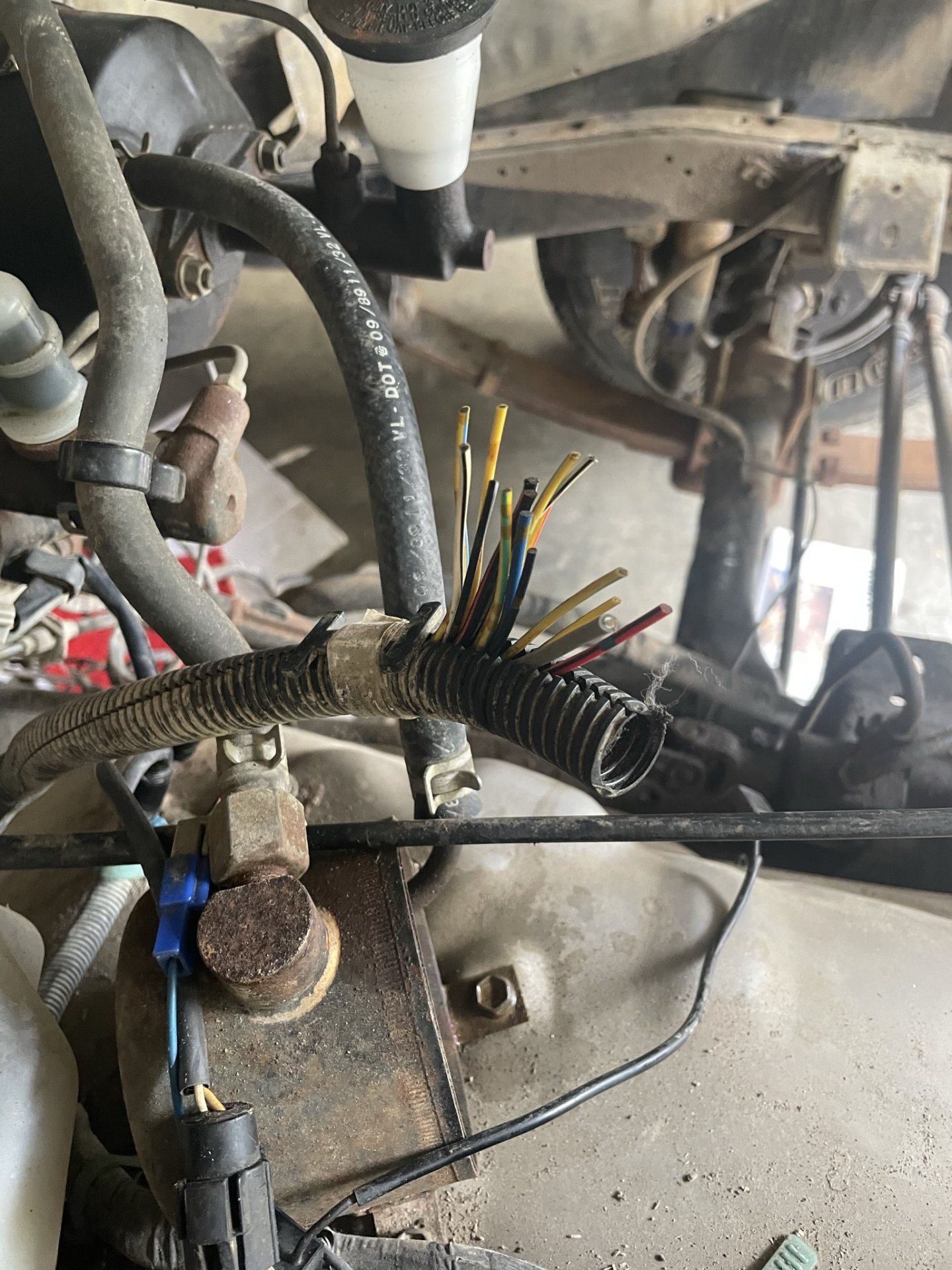 And finally (for now) can anyone tell me what these two connections are for, and the hose with the check valve - again I'm guessing it has something to do with petrol related vacuum? 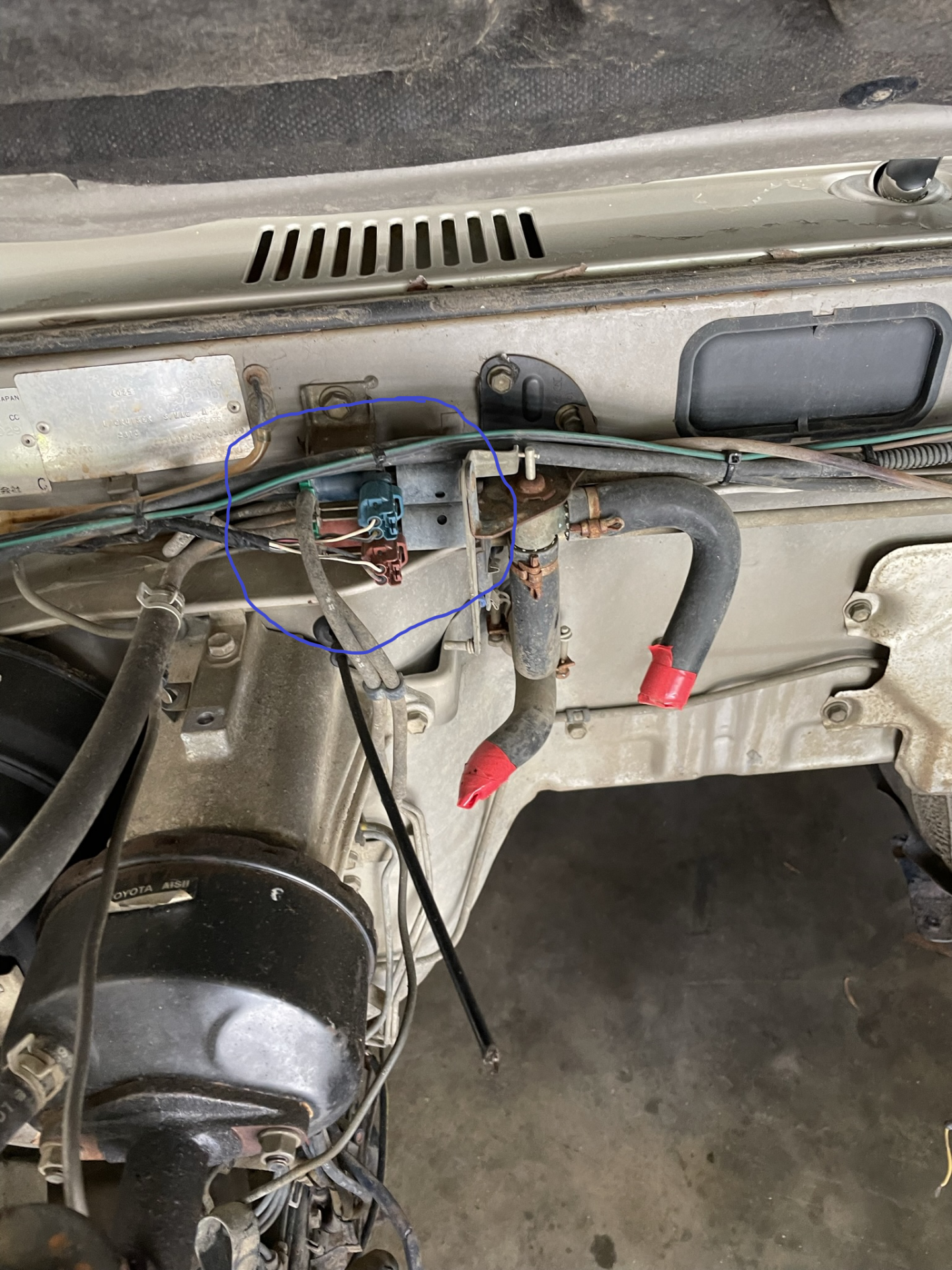 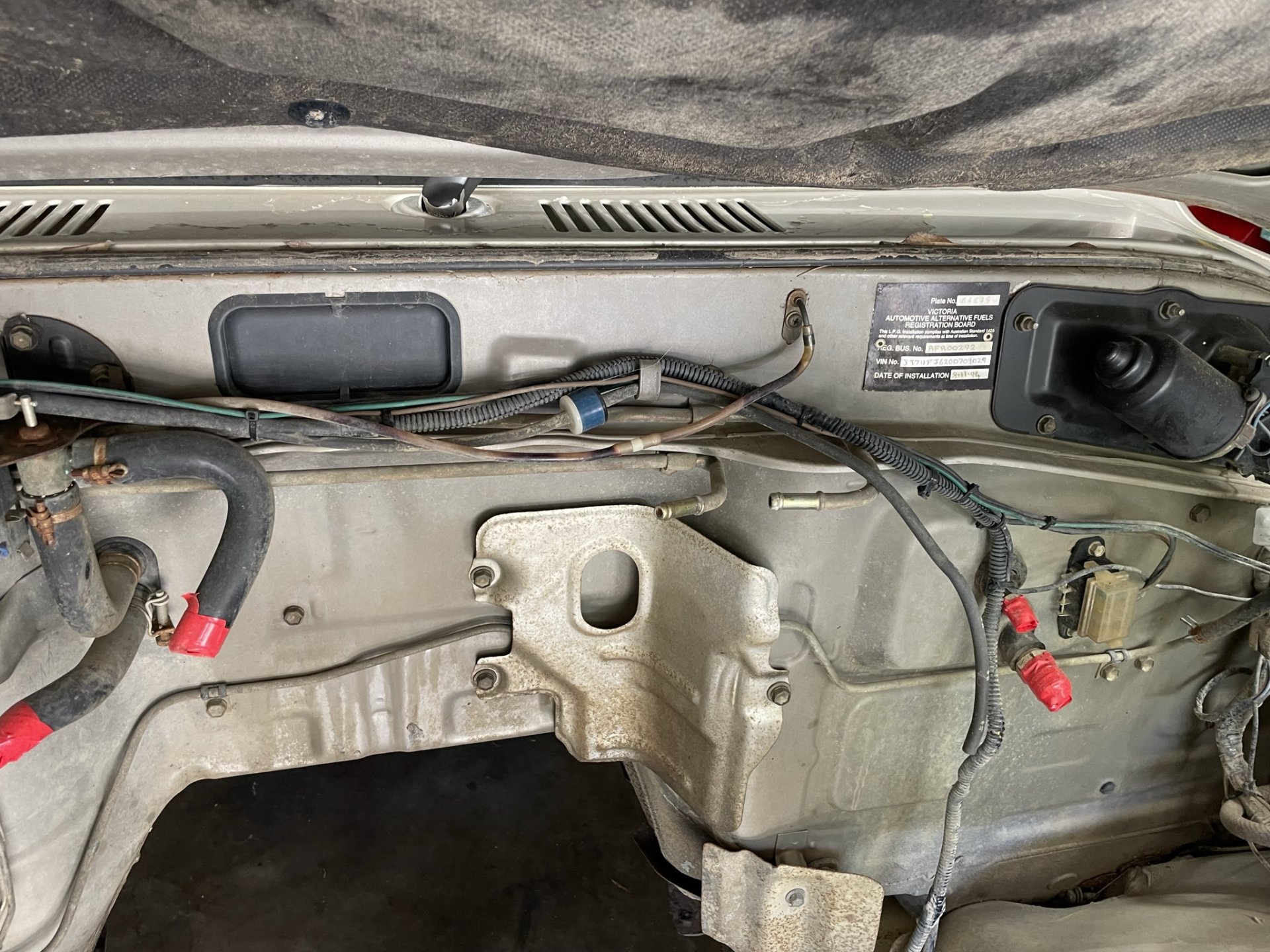 ivn351 said:
And finally (for now) can anyone tell me what these two connections are for, and the hose with the check valve - again I'm guessing it has something to do with petrol related vacuum?

Those looks like the solenoids for the vacuum actuated 4wd. Is there a button by the steering column that says H4? 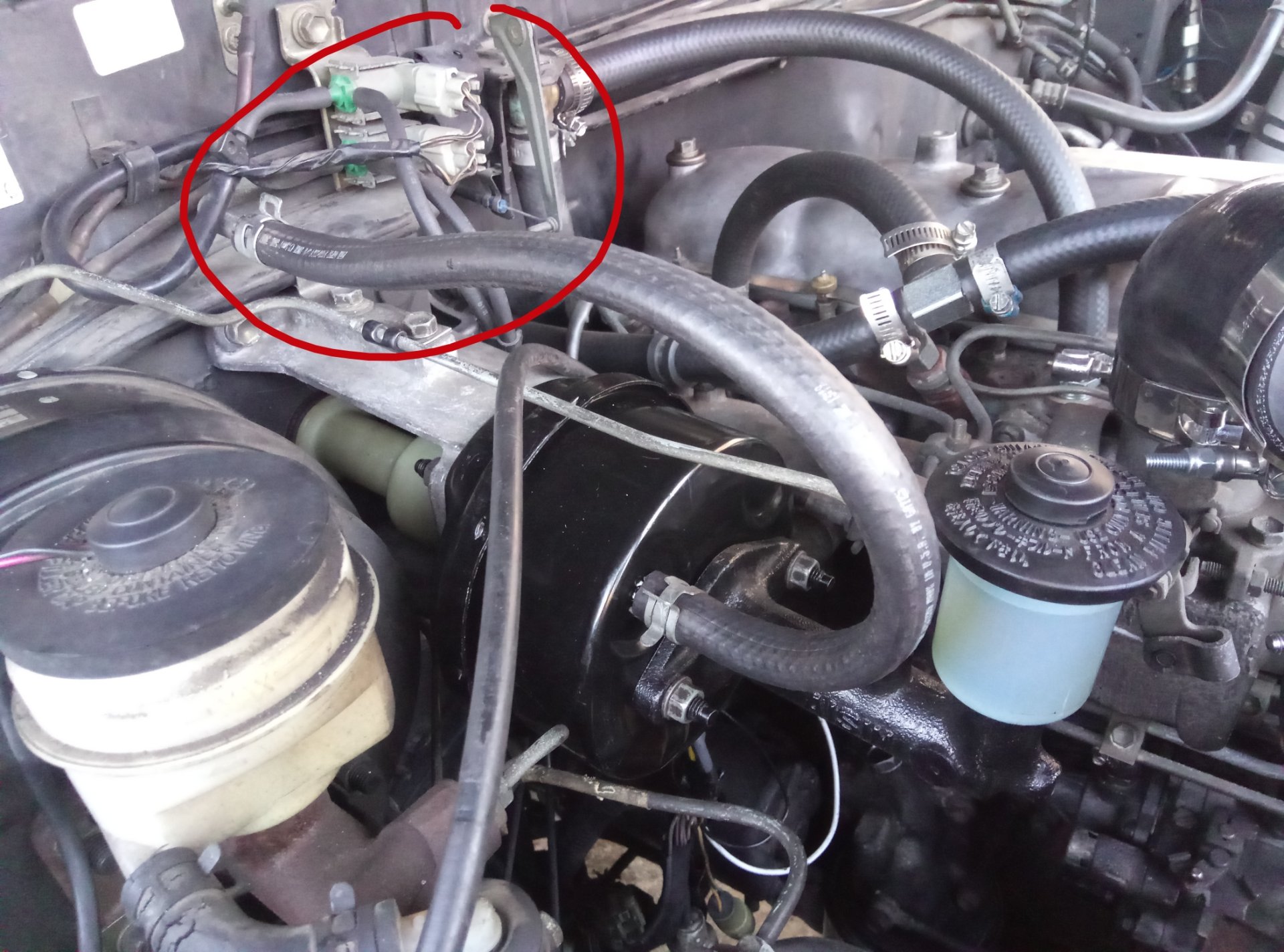 Yeah there is.
Thanks for that. I won’t need those as I don’t have a vac actuated box. Awesome! Another component I can strip out.

BrickRunner said:
Those looks like the solenoids for the vacuum actuated 4wd. Is there a button by the steering column that says H4?View attachment 3125897
Click to expand...

So here's where its at right now. I've pretty much removed everything that I'm going to remove including all fuel lines and tanks and piping and the like, and everything else from the engine bay that I don't need (i think). Next step is to wait out the weather, then wheel her out and give it a bit of a clean in the engine bay and underneath, as it would appear old mate had her knee deep in bog in some areas, and its gone rock hard. 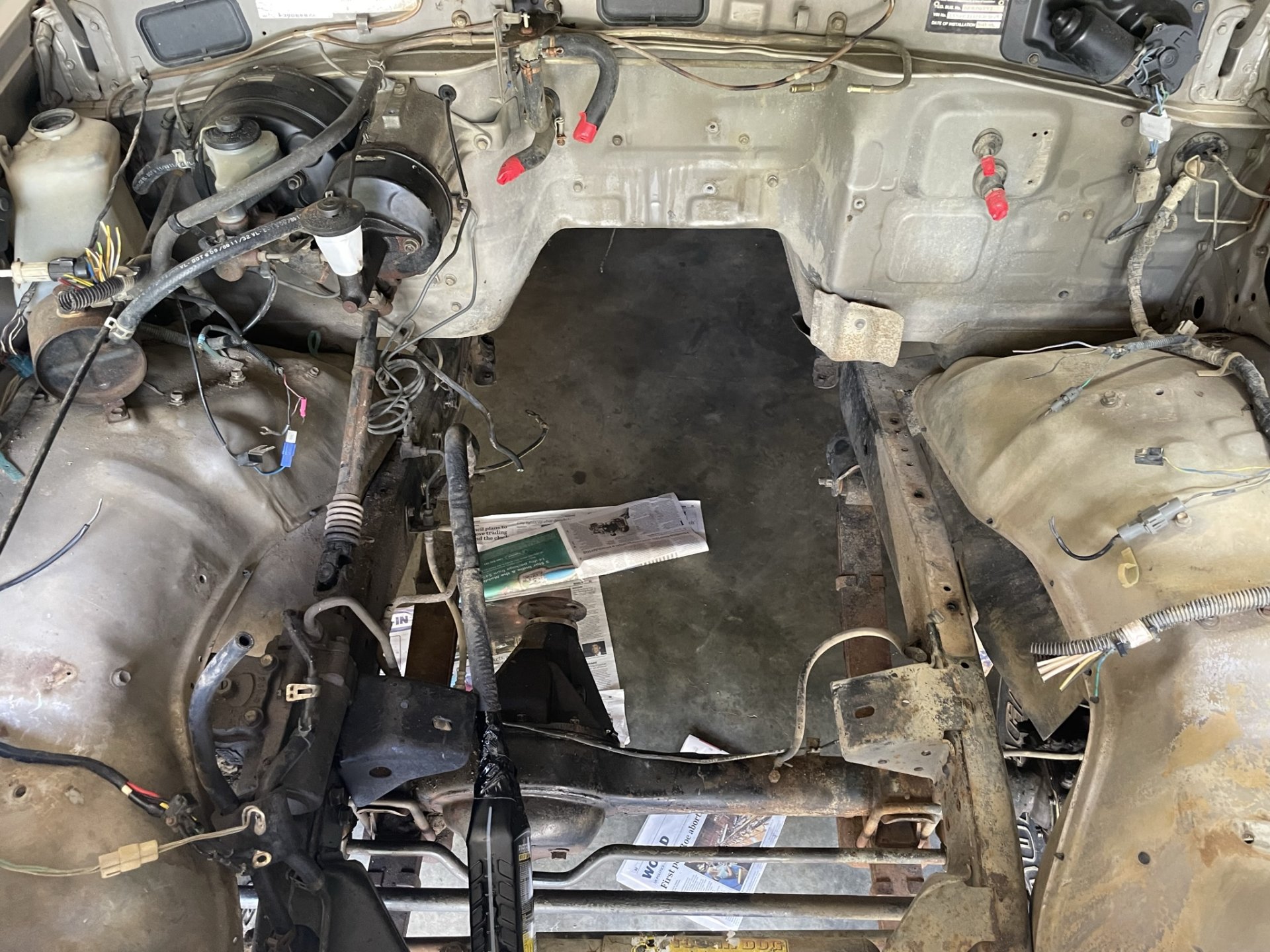 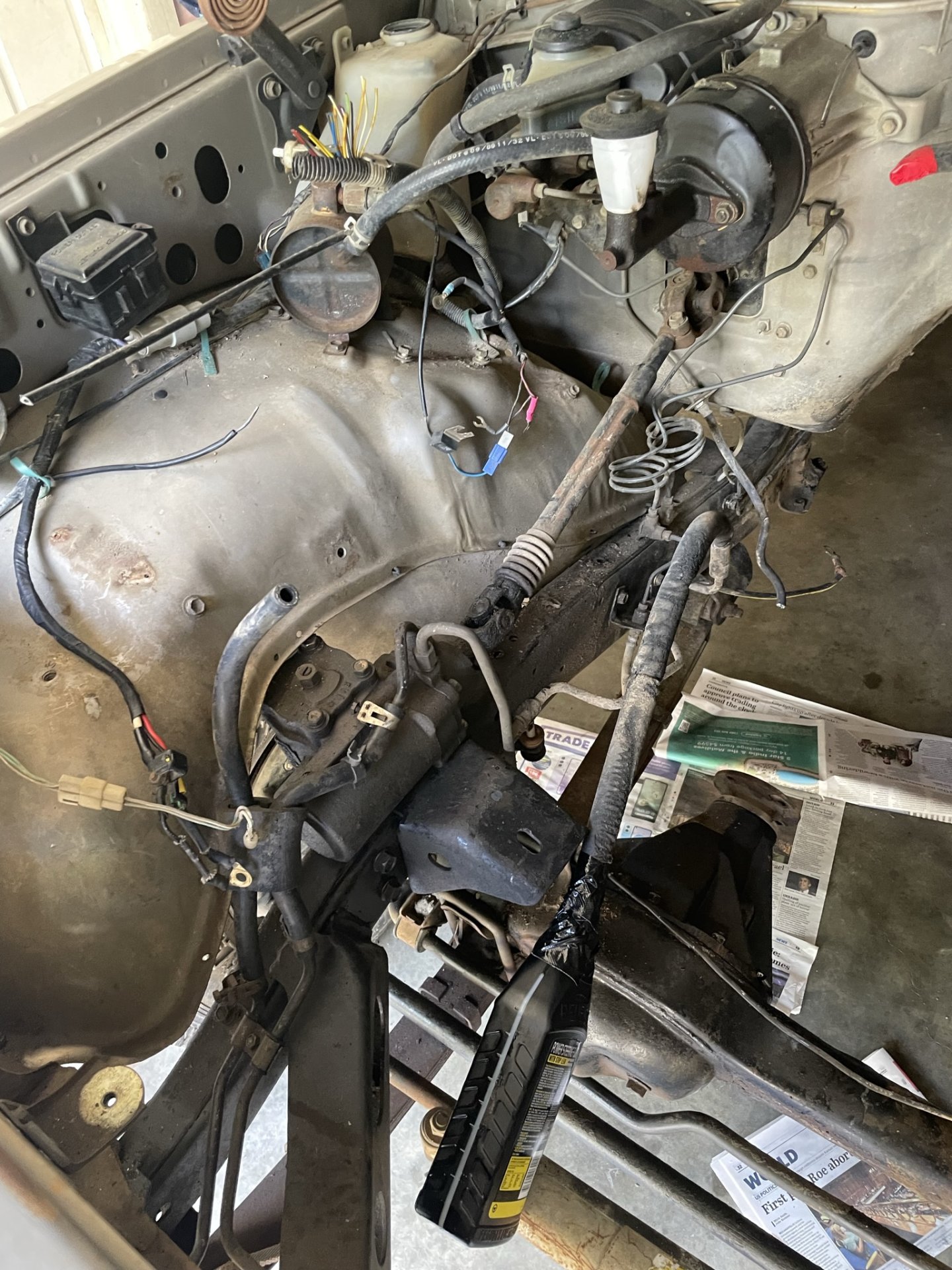 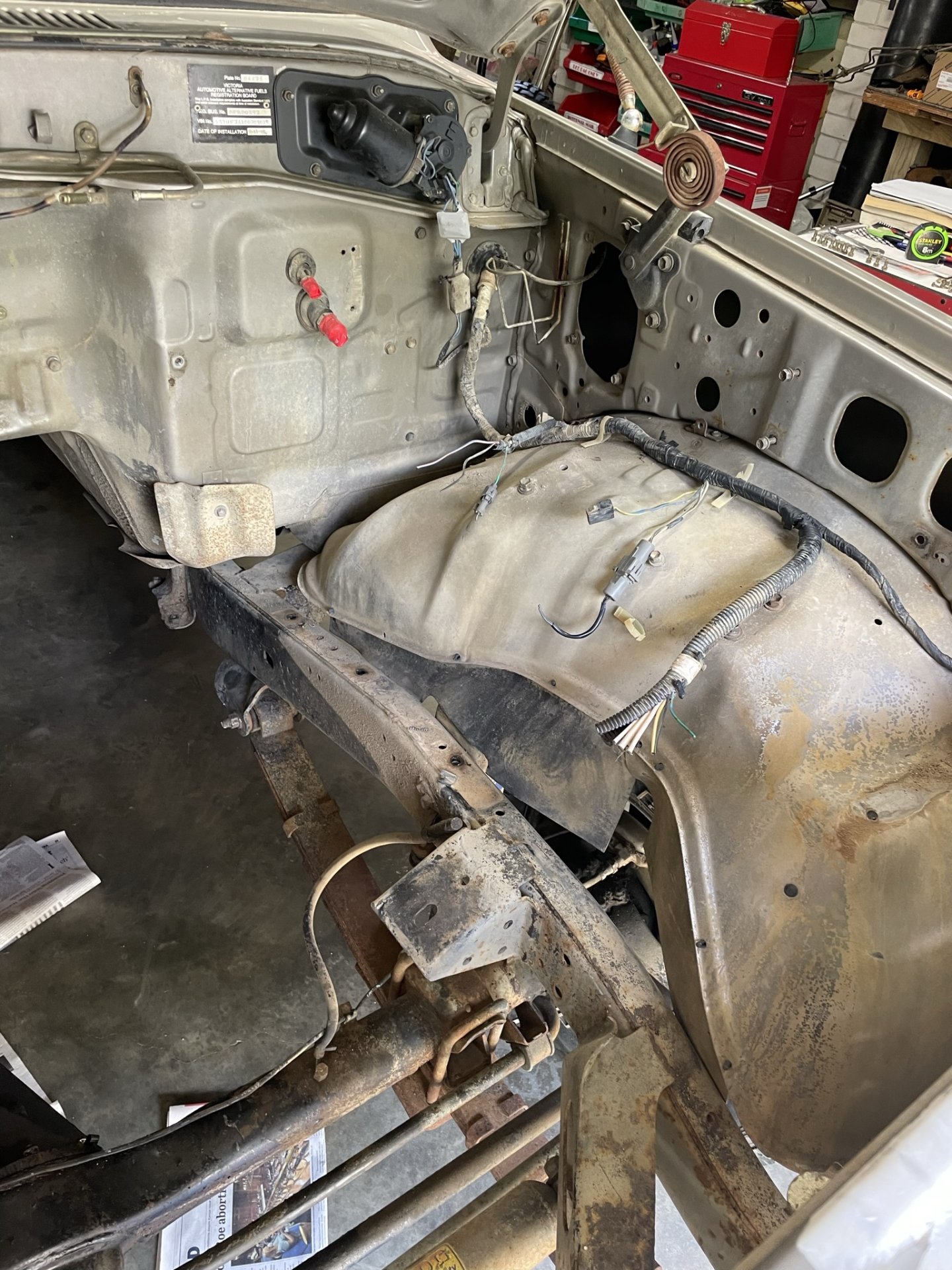 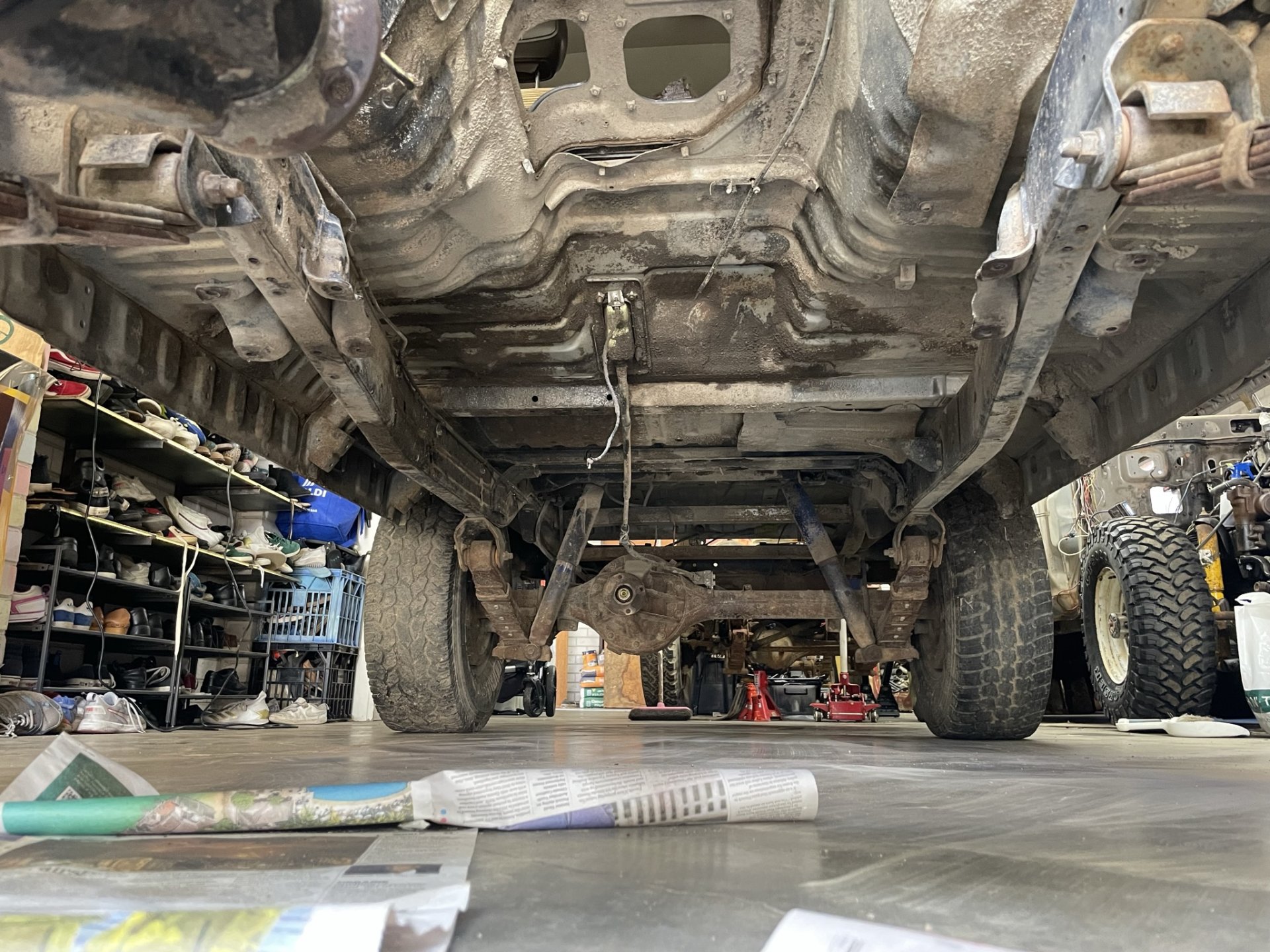 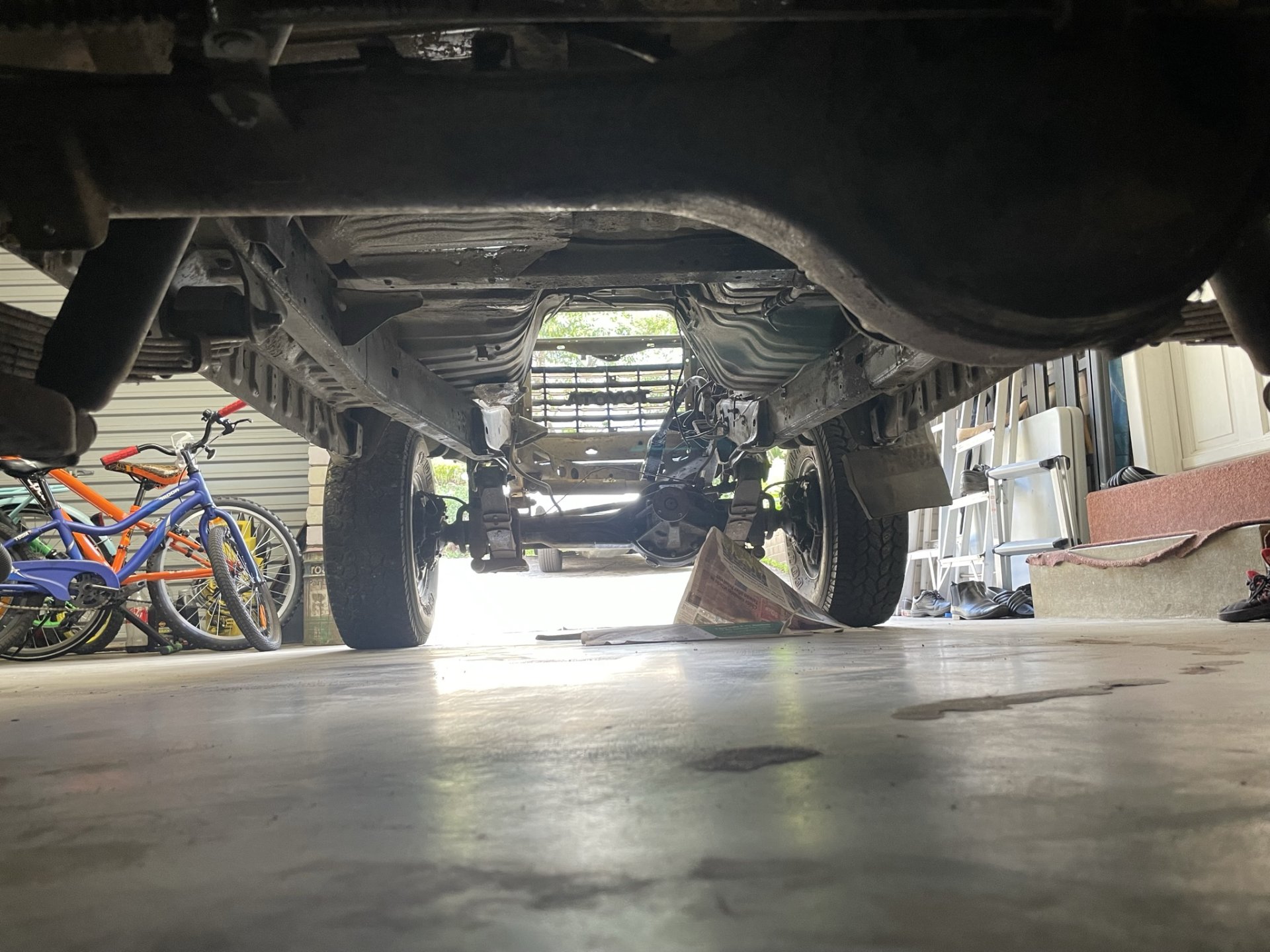 Ok so small update but every long journey starts with …. yadda yadda

So over the last couple of weeks I haven’t done much but grabbed myself a 2T engine hoist and was amazingly fortunate to get the mysterious gearbox cabling loom from a legend of a guy, David W, who had a 3F 5sp just like my ‘62. So my investigation just got a lot easier.

Today with the help of my new hoist and my beautiful wife, I was able to get the body off the 60. The amazing thing was that half an hour earlier I sat and gazed at the glorious mess and thought to myself “I am not doing anything with this today” - the old de-motivation creeps in now and again, but I was able to smash that motherf$&!er today. 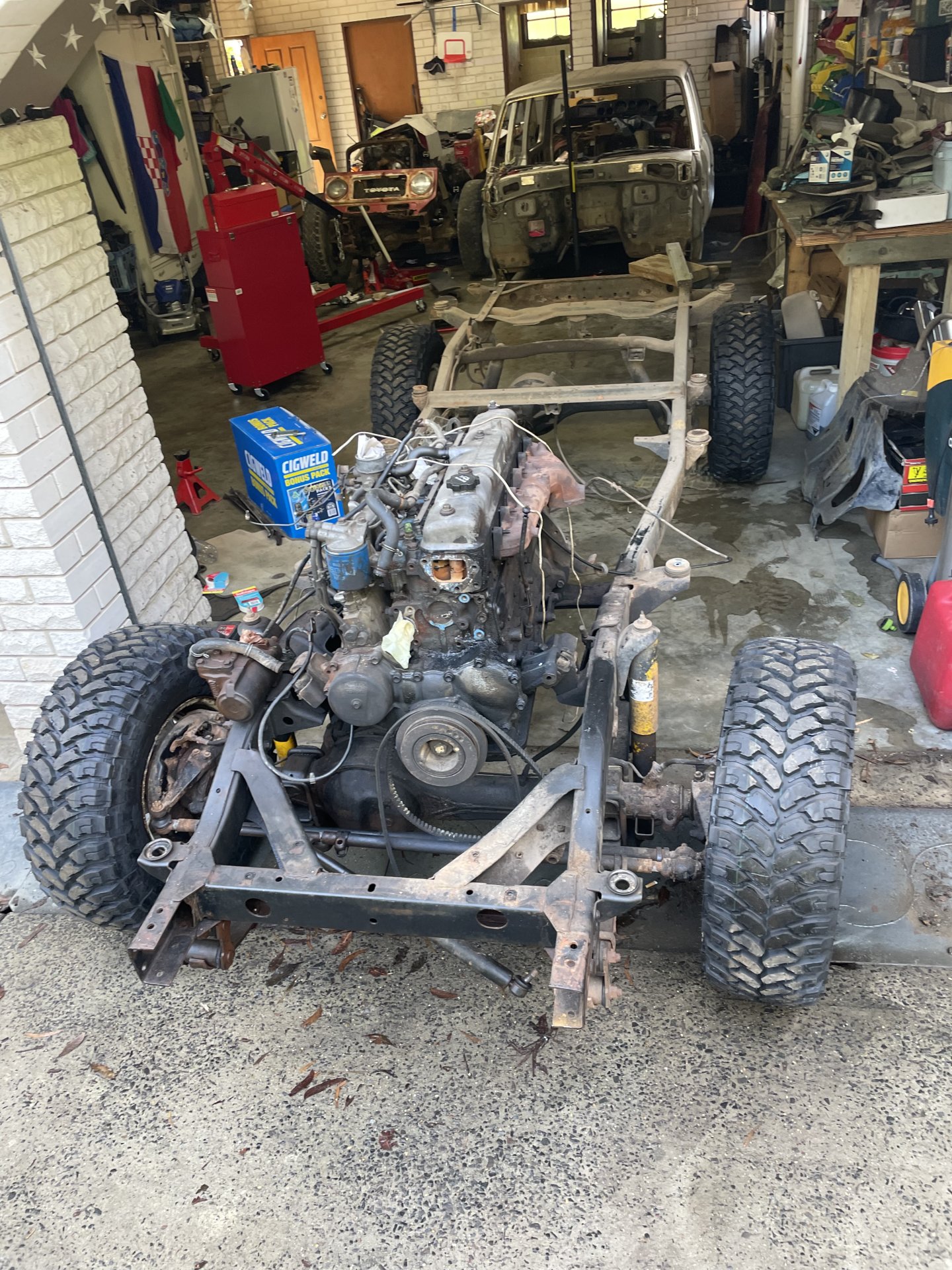 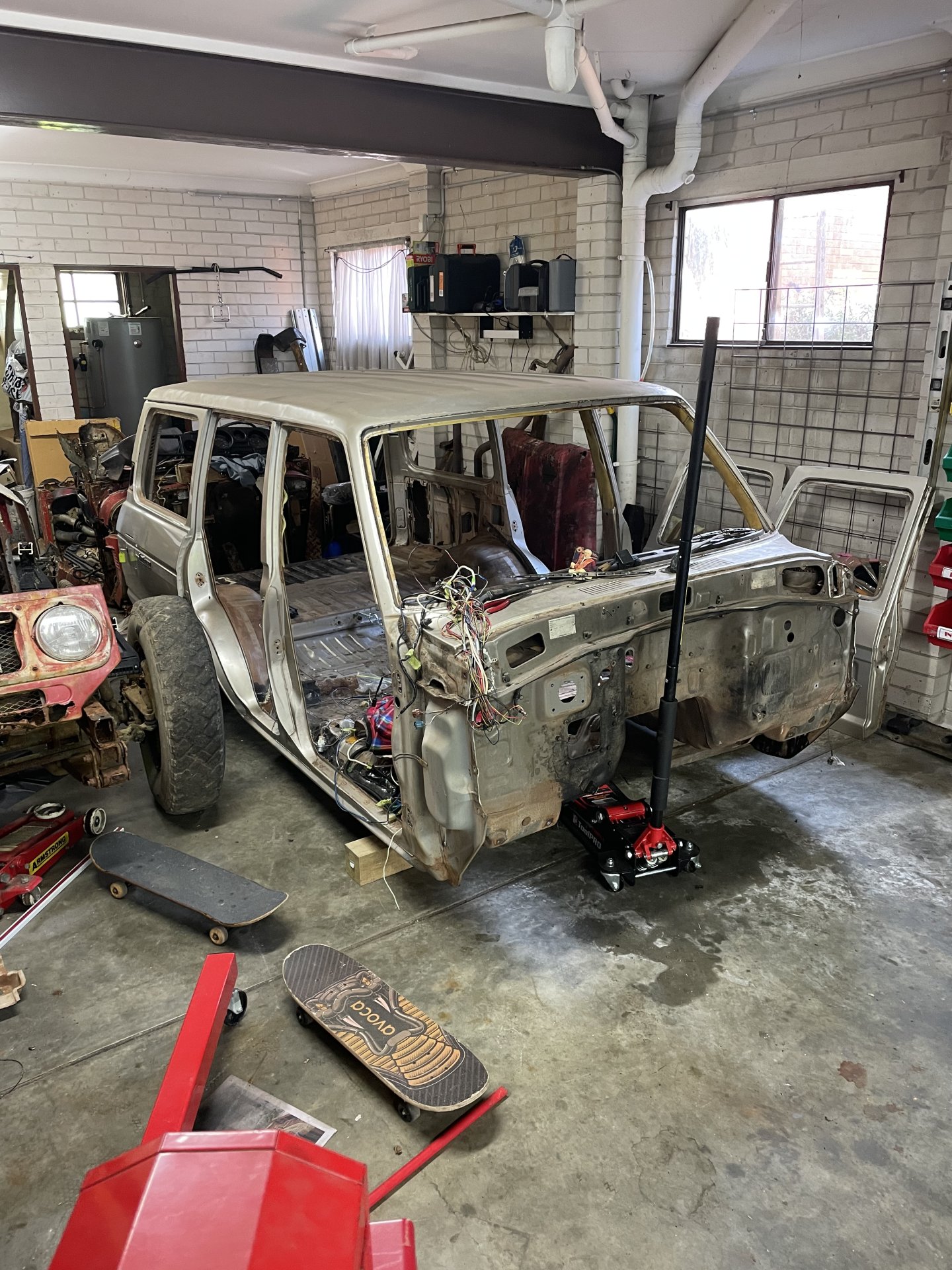 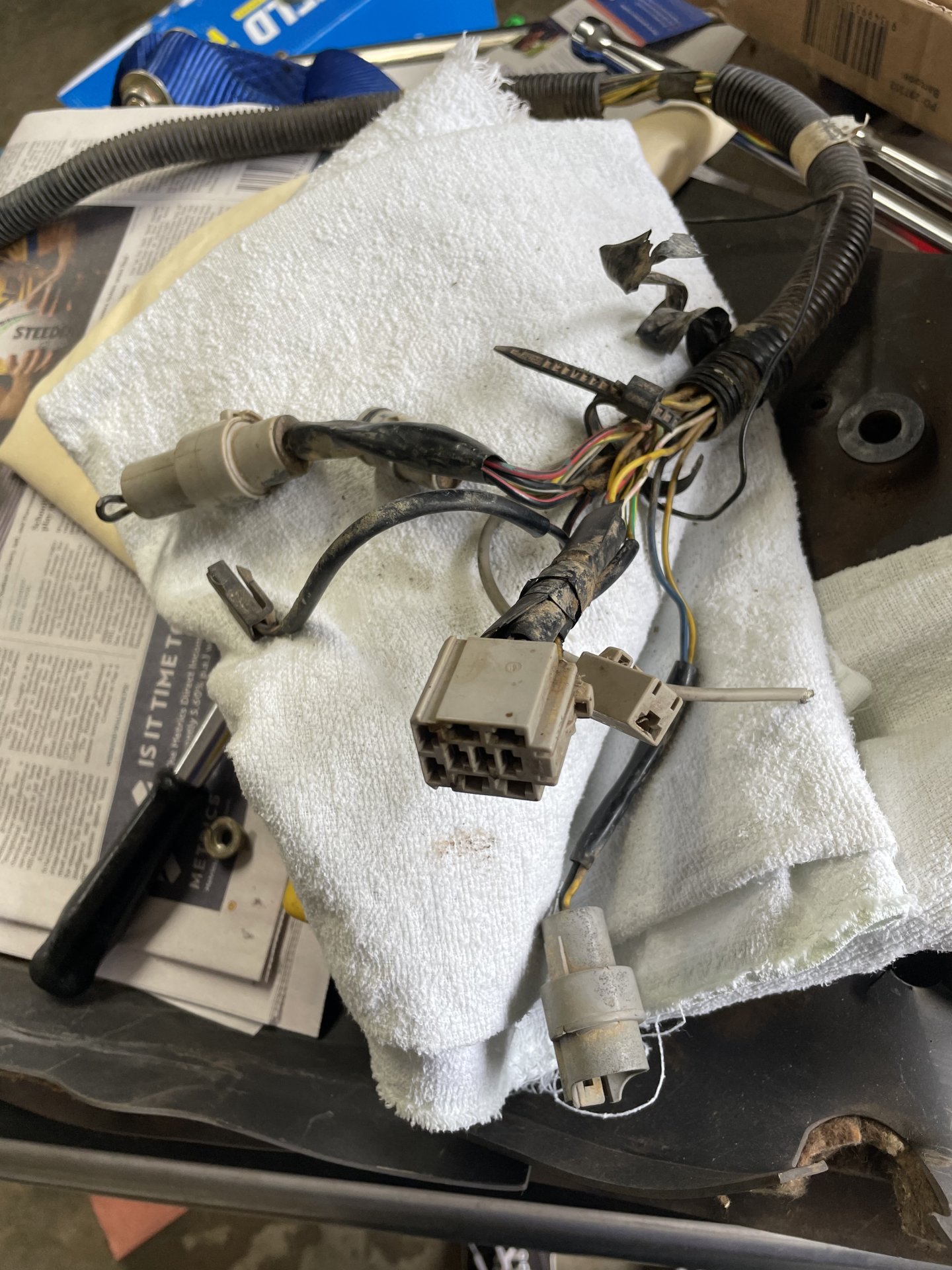 Hi, If the wife works on cruisers she’s a keeper!
Mike Hanson

things have been moving slowly, but moving along anyways.
The motor, gearbox and shafts were removed from the HJ60 and I have partially stripped the engine ready for gasket / seal replacement and a bit of a cleanup.

The motor looked to be in good condition, no oil gunk, no major signs of wear or damage - rocker tips look good, no bent rods etc... although one of the rods had come off the rocker.

I did have a bit of a d'oh moment when trying to take the pulley off - used the socket in the flywheel trick but jammed it up against a guiding pin in the back of the block and chipped off the cast iron. Thats some serious force. I figure a bit of JB Weld will sort that out. 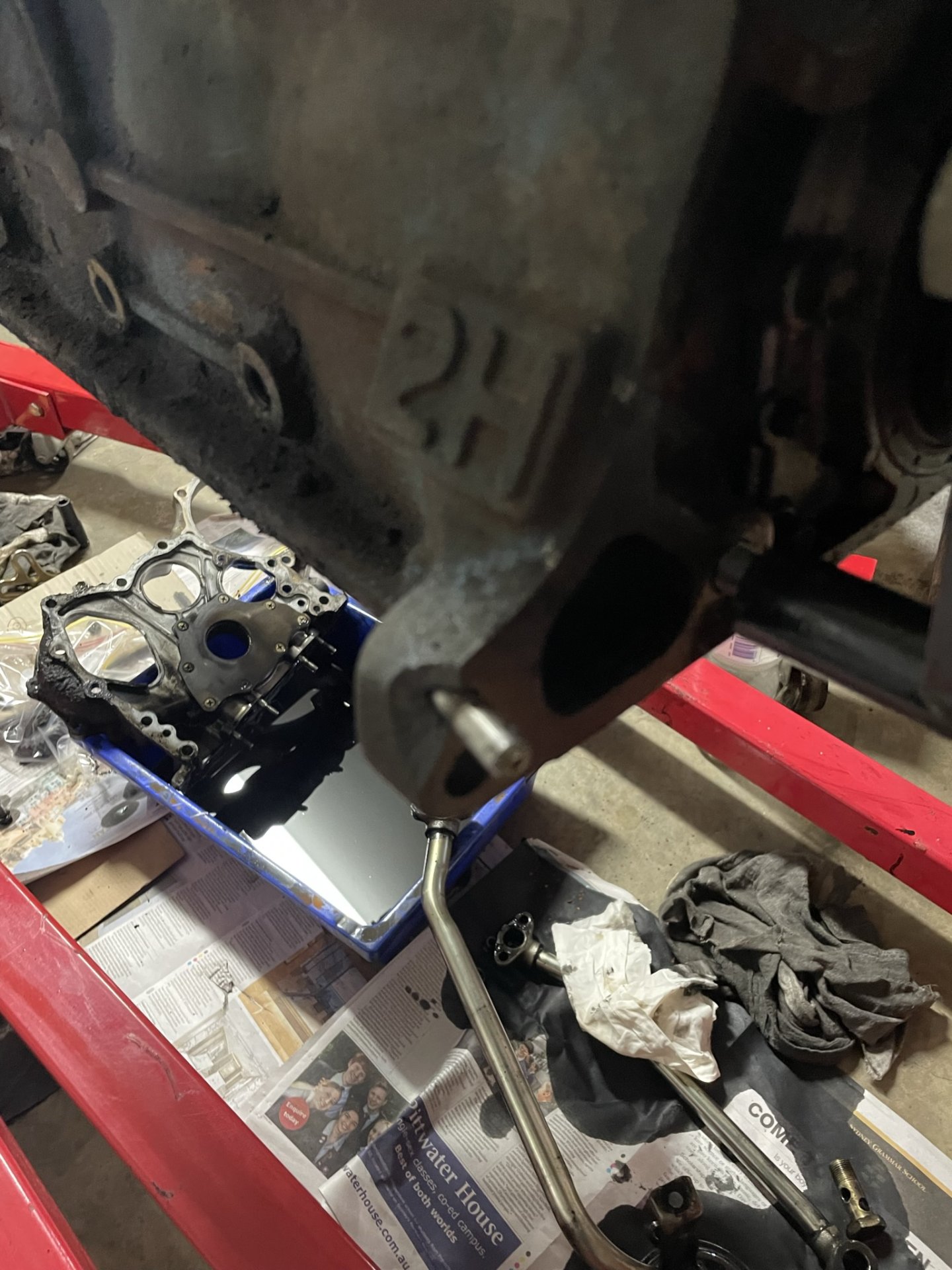 Starting off with the intake side, I've spent about 4 hours trying to get the gasket goo off the oil cooler housing and I still cant get it shiny, i figure one more day of every chemical known to man and blades and brass brushes will get the job done. Almost gave in and sent it off for a chemical clean but decided against in the end. Then i'll swing over to exhaust side, then front and then back.
Lots and lots of cleaning to do.
I'm also undecided about whether I paint or polish the parts like rocker cover, front timing gear cover, intake manifold. I guess it depends on how desperate I am to get the thing fitted and running.
I

Some pics of the dismantling.
I realised that i had set the engine to 11deg mark BTDC rather than TDC, so I put some white-out on the aligning marks, along with the injection pump "window". I also put some white out on the injection pump housing that is fitted to the timing case, to make sure i have that angular adjustment reference for IP timing, but i unfortunately didnt put the mark o n the timing case, so another d'oh moment, but no biggie.
As I understand it from all the reading I've done, as long as everything lines up with the factory markings on re-install, everything's gonna be alright. 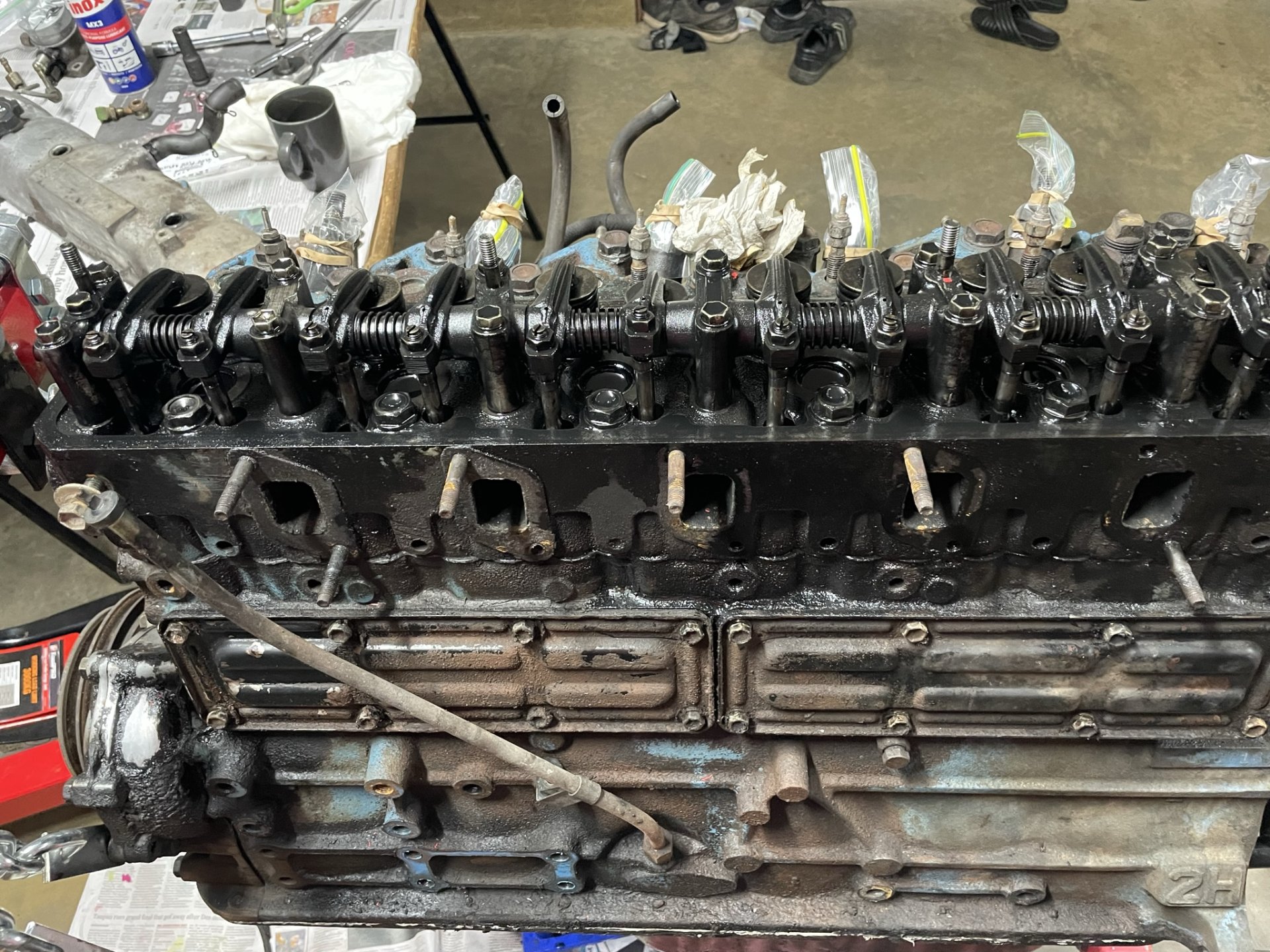 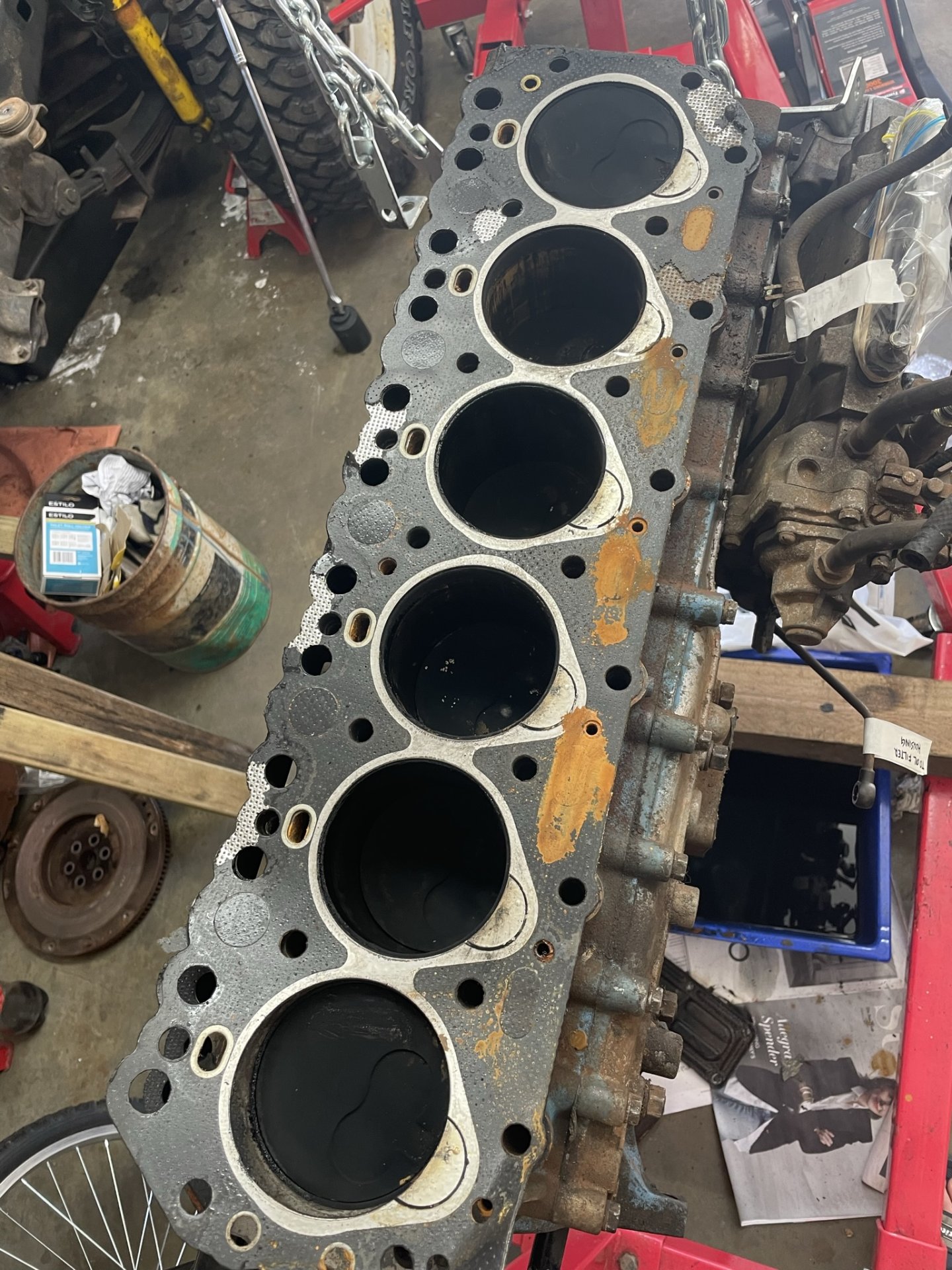 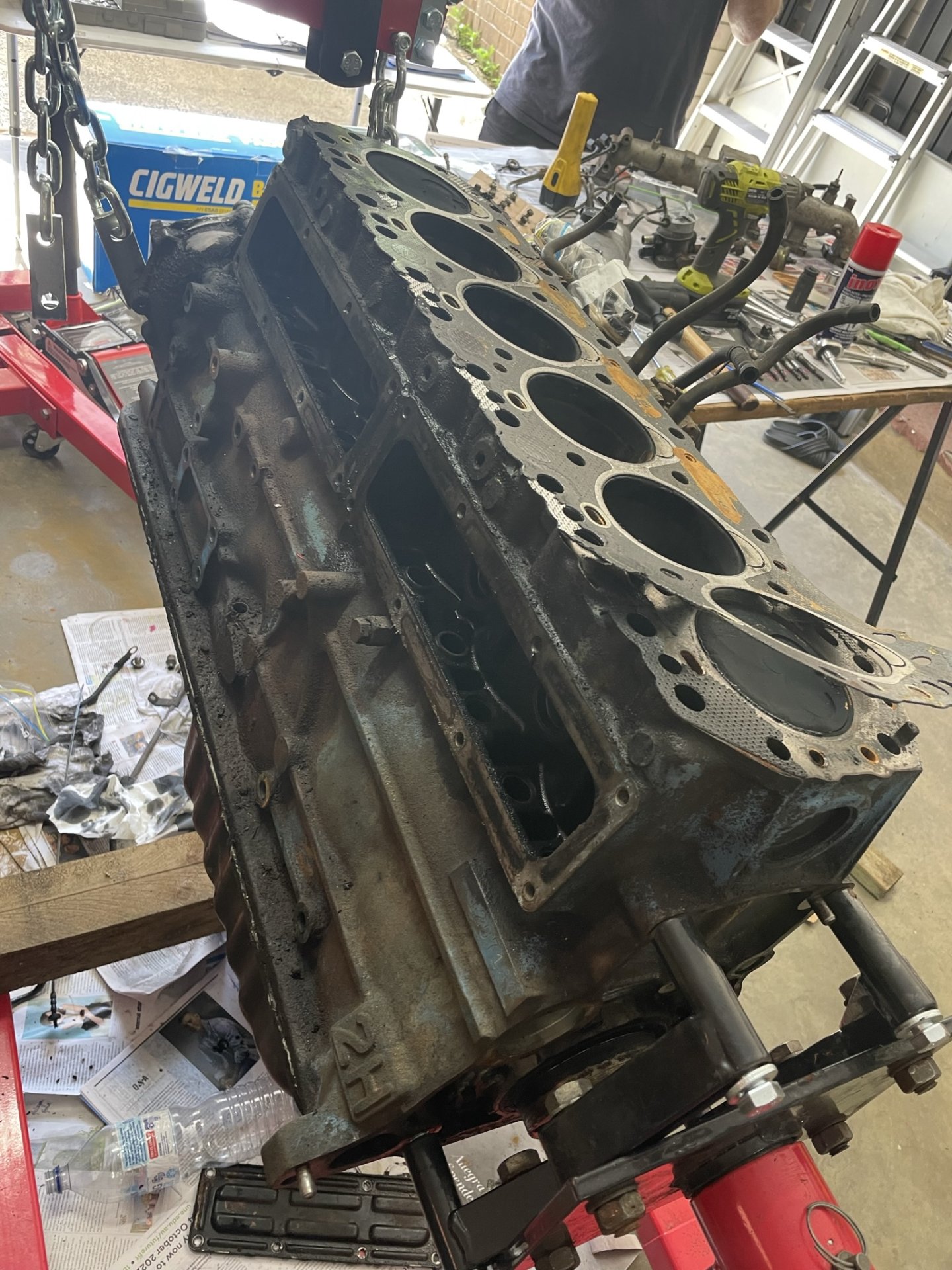 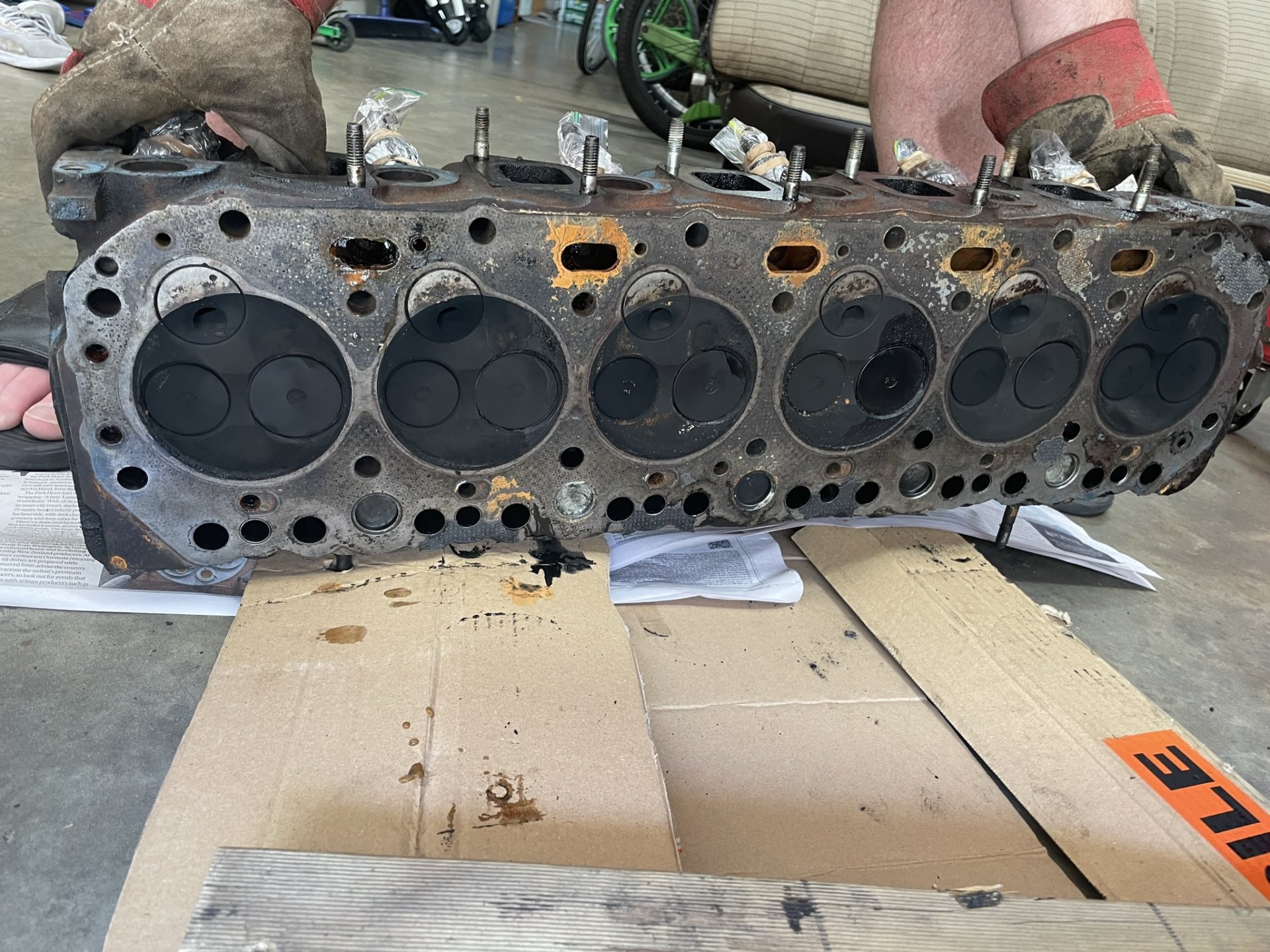 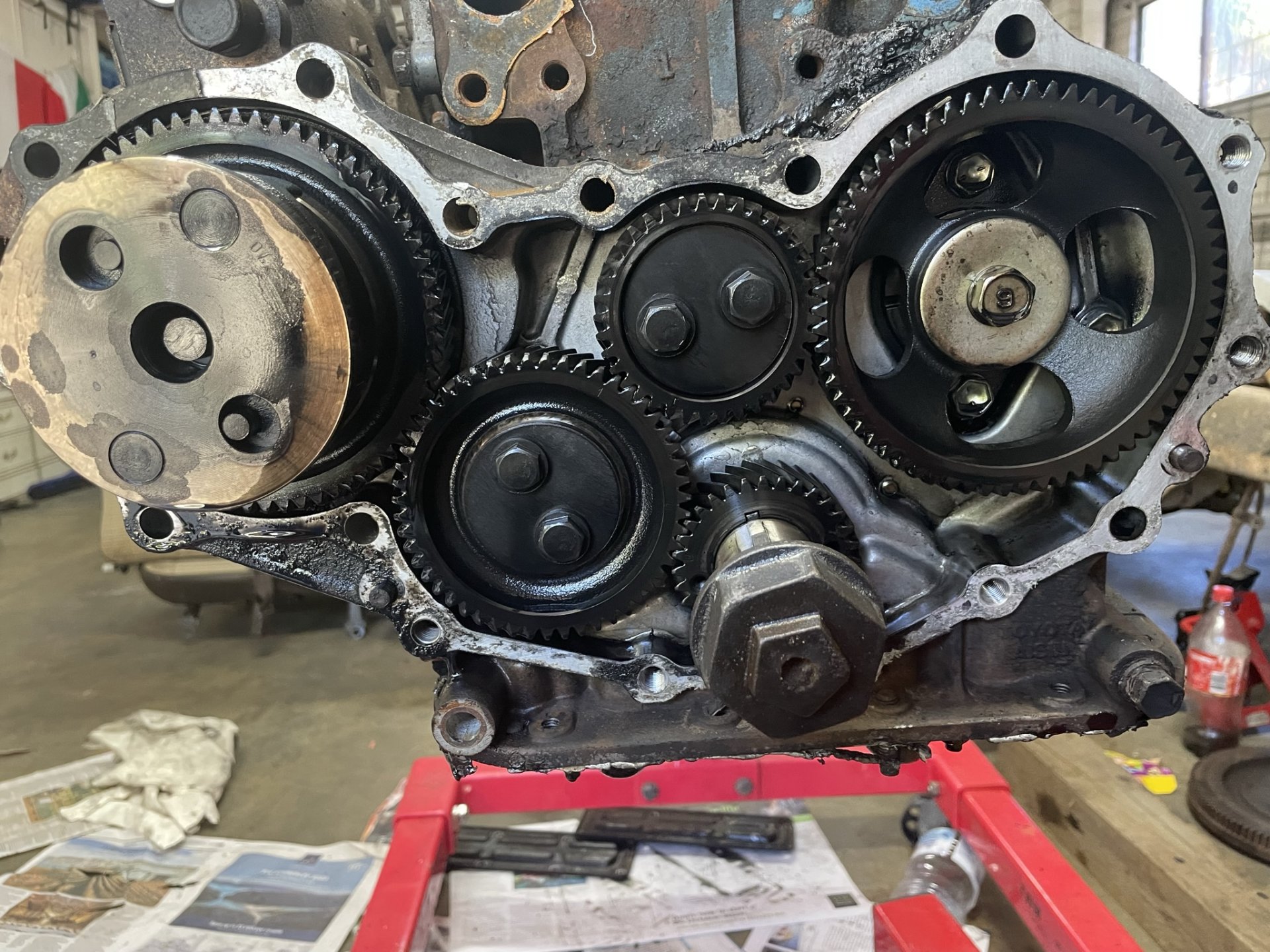 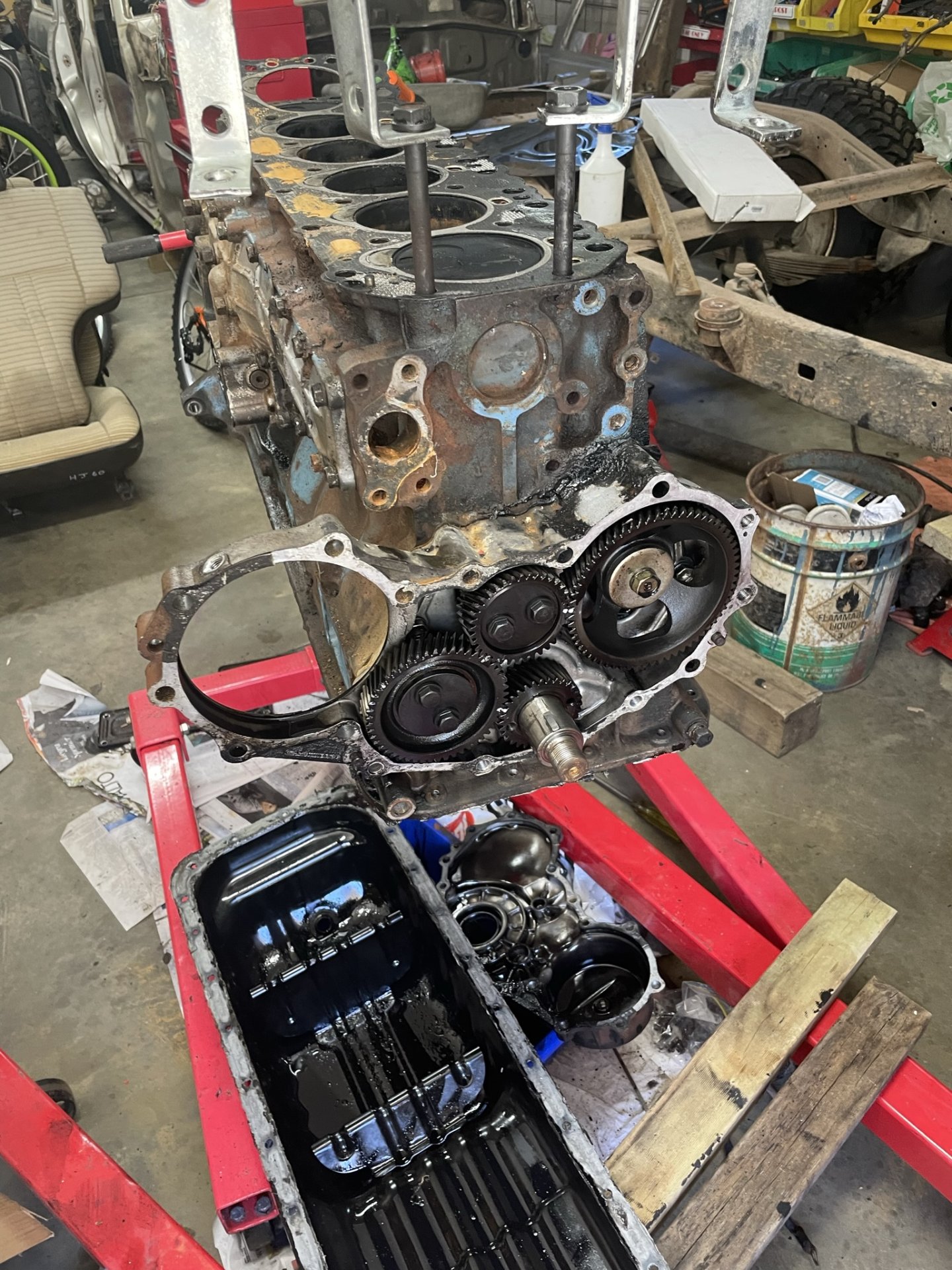 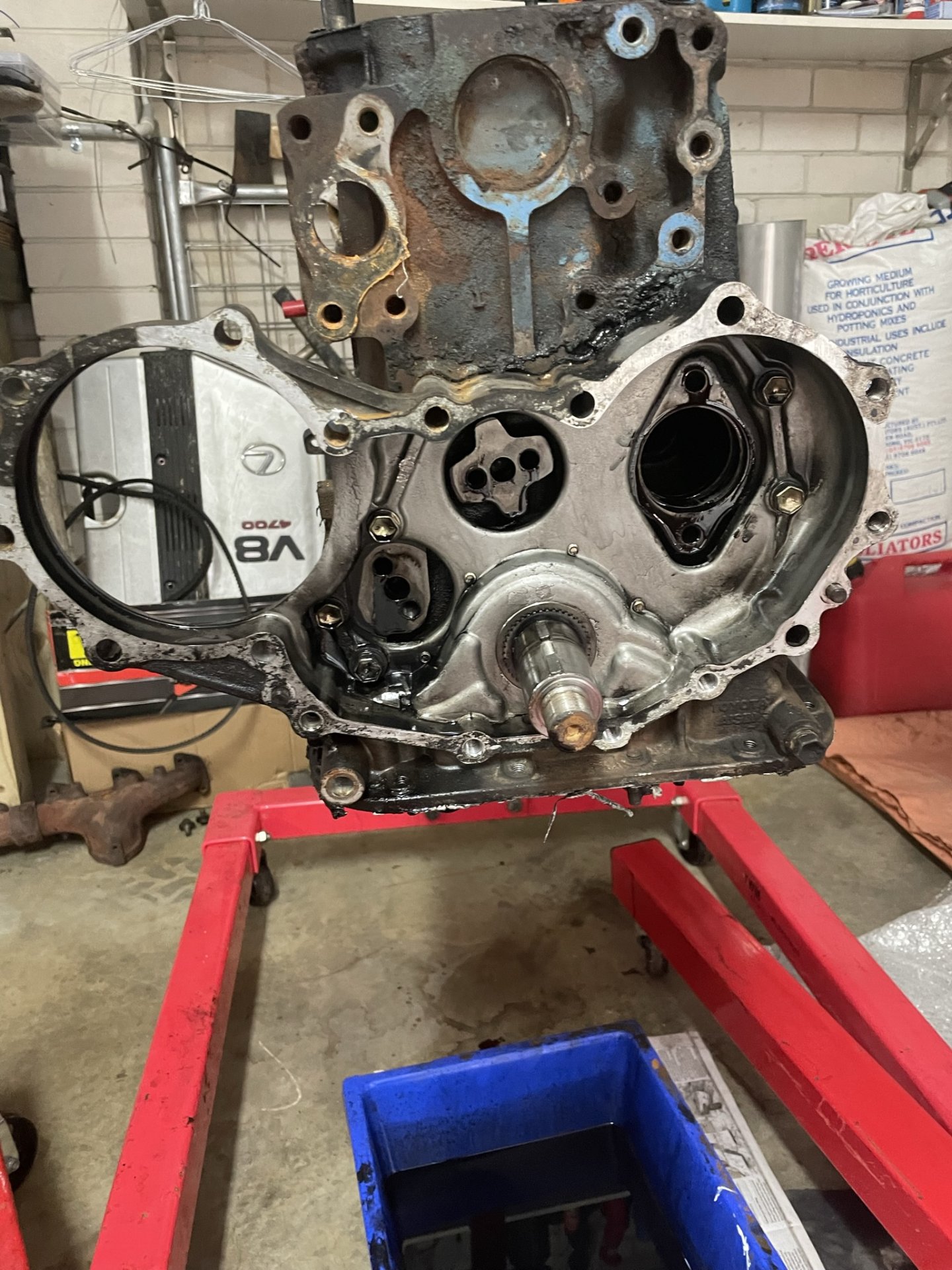 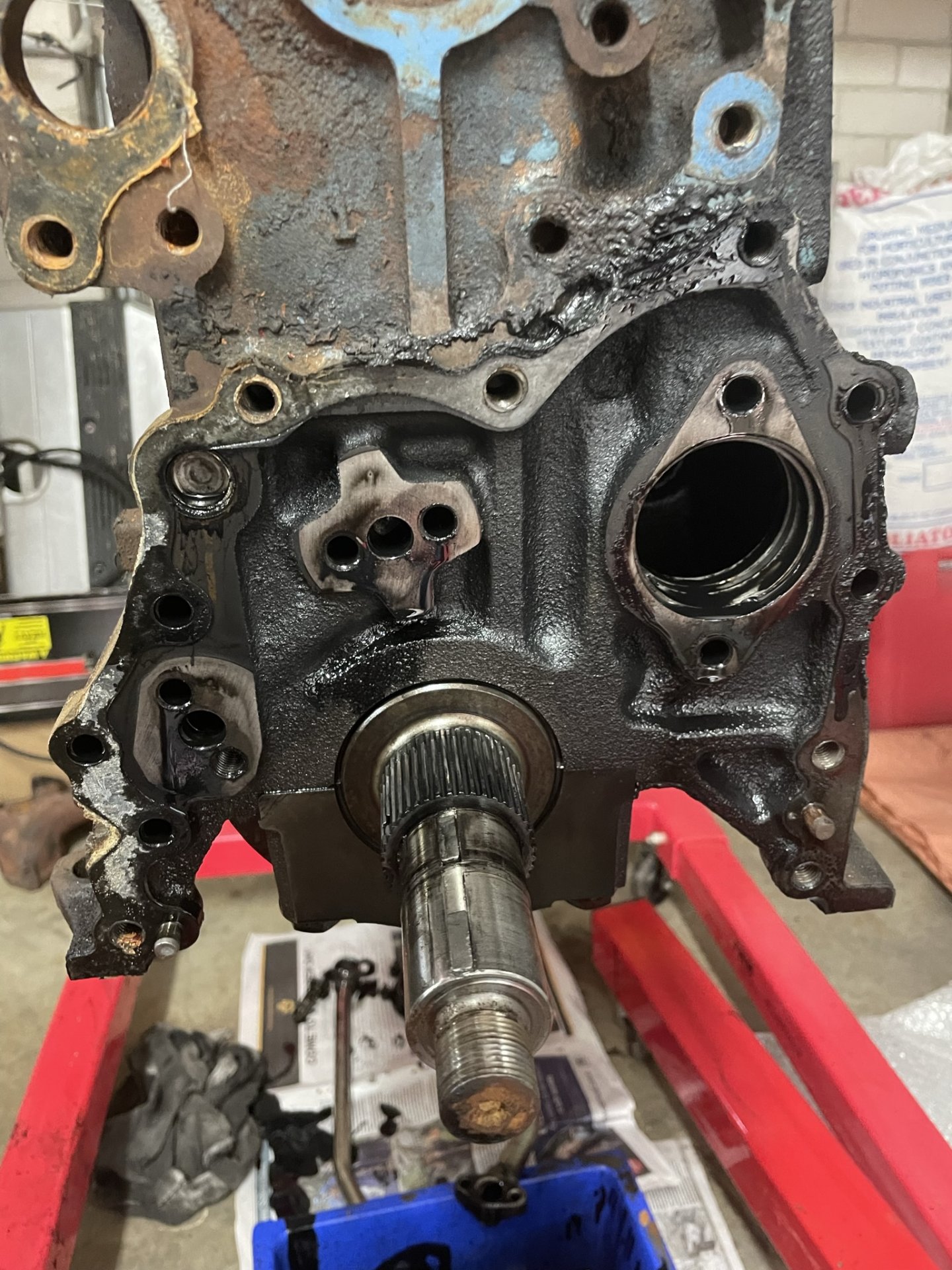 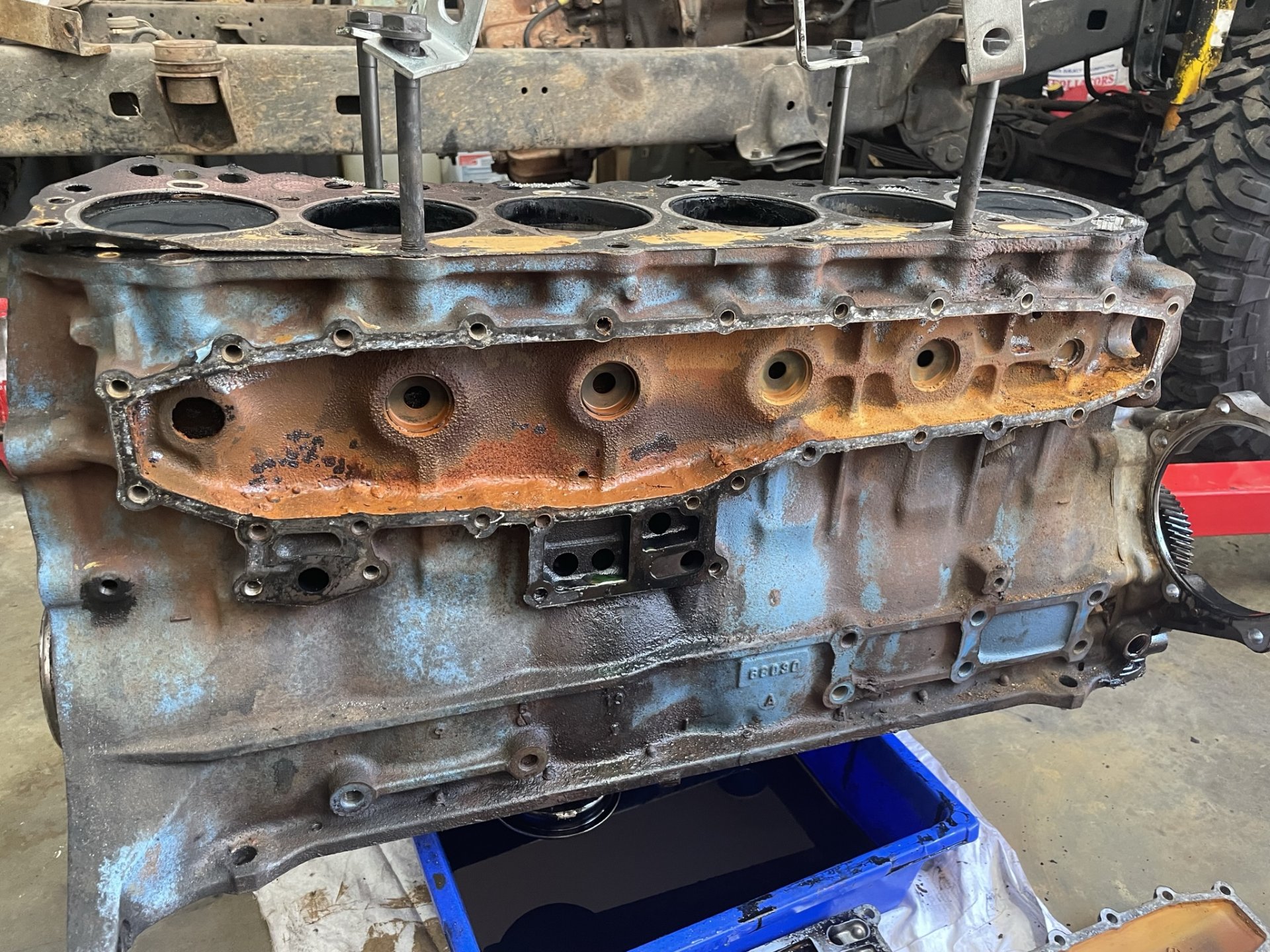 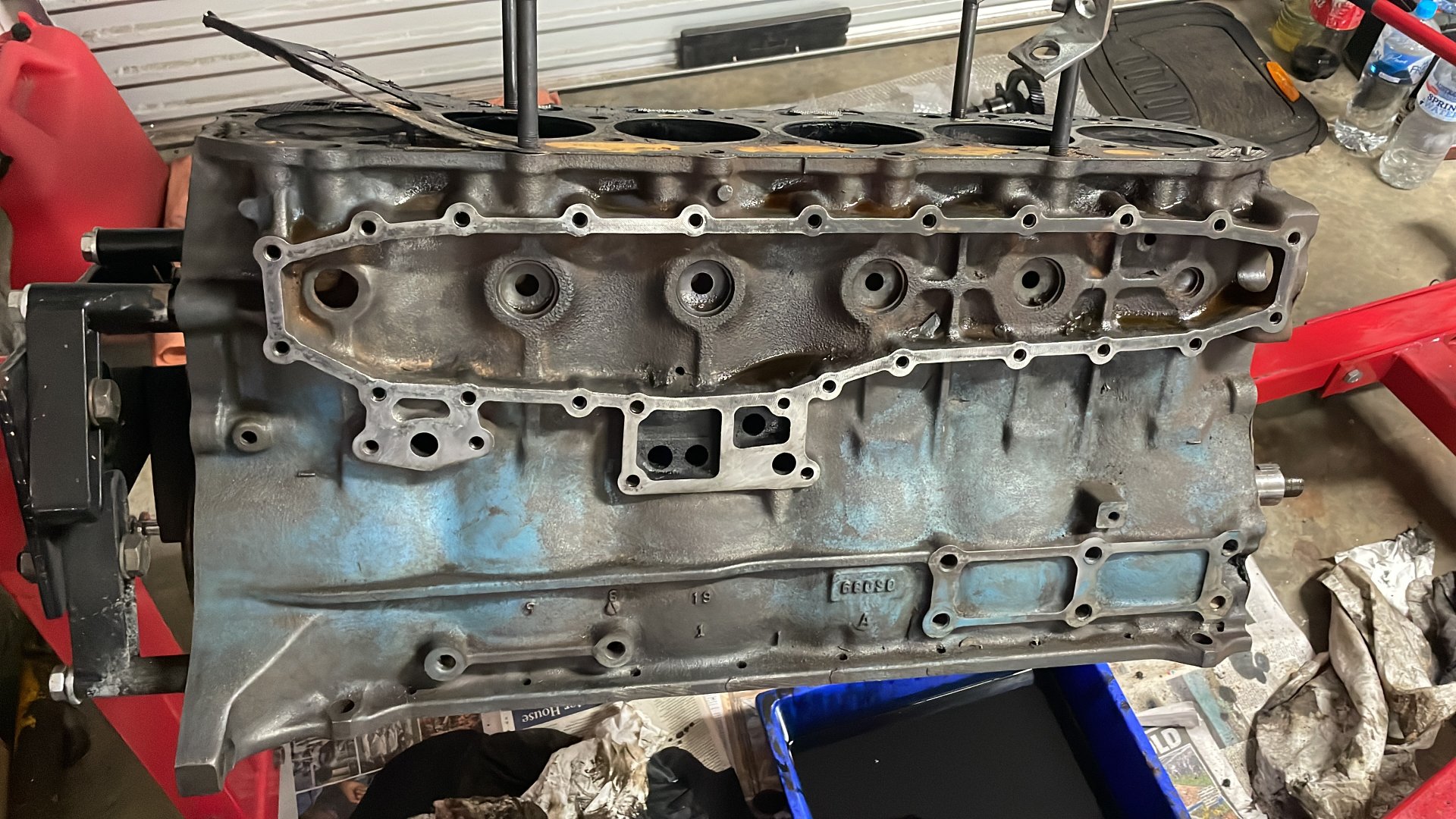 Okay I am doing the same swap but with a 3B and replacing all of the gaskets takes forever… and do a good job too, when I putt my 3B back together it started leaking all over the place. Take you time it needs to be prefect. I am literally thinking about getting mine machined.
1989 FJ62 on 33s with ARB bumper, super winch, PIAA headlights, 2" OME lift, Yakima roof rack, + soon installed lockrite differential locker.
1984 BJ60 stock with extra rust. +
1993 Toyota pickup truck, with custom flat deck, and I BUILT IT bumper.
I

What sealant did you use? Also, I’ll definitely be checking the engine block deck and head for straightness and if outside of limits I’ll take to it with the sharpening stone. I’ve put about 6 hours in on the oil cooler housing engine block side but that looks to be the worst so far. I’ll let you know how I get on with the rest. I’m into the exhaust side now and then front and back, then pistons and bores, then underside.
I 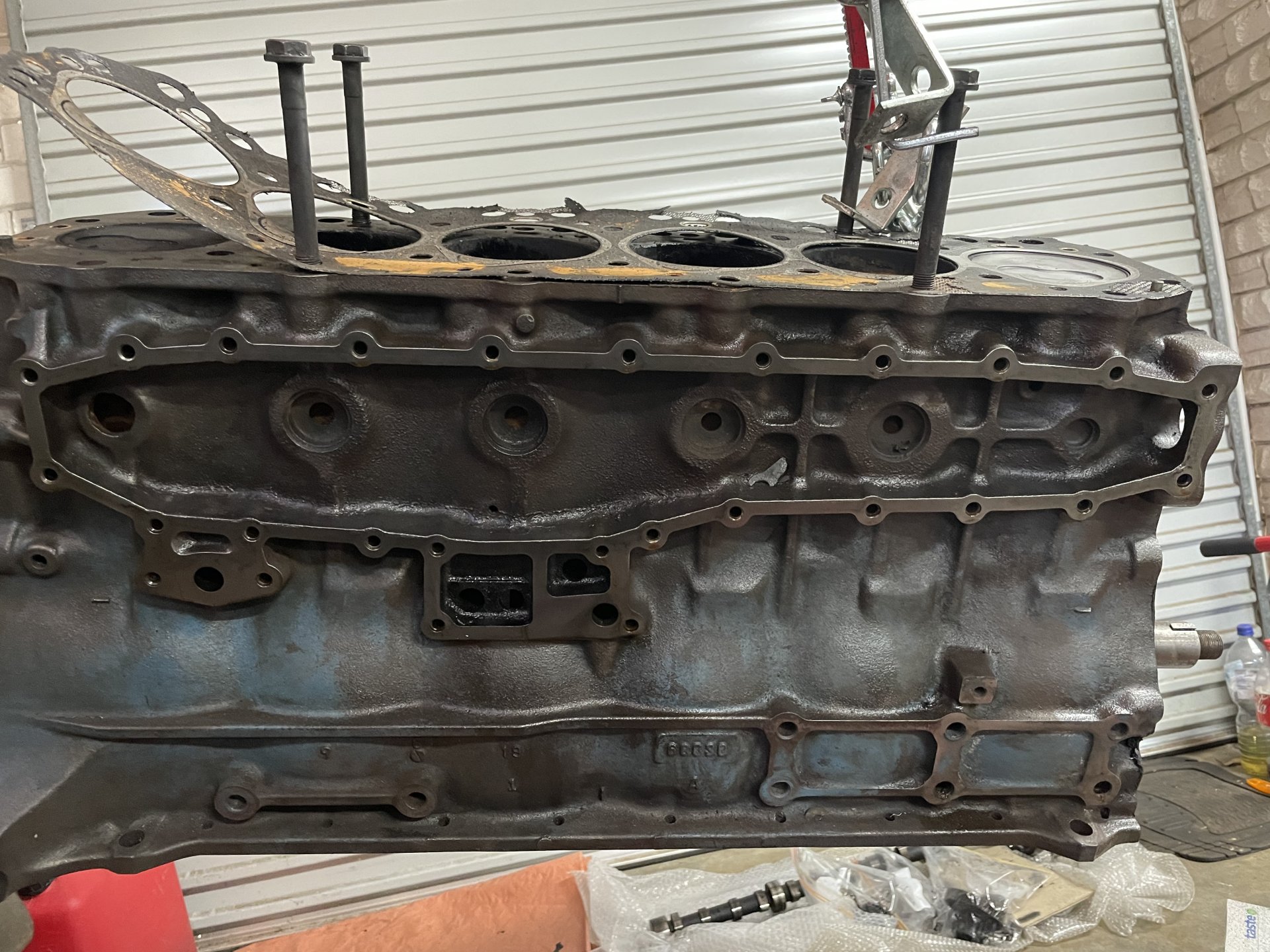 Not sure I can get that mating surface much cleaner than that.

You’re probably fine. It has to be extremely smooth….. I used a gasket kit from diesel power parts… pretty good quality and has a warranty.
1989 FJ62 on 33s with ARB bumper, super winch, PIAA headlights, 2" OME lift, Yakima roof rack, + soon installed lockrite differential locker.
1984 BJ60 stock with extra rust. +
1993 Toyota pickup truck, with custom flat deck, and I BUILT IT bumper.
You must log in or register to reply here.