When I started this adventure, I couldn't find a ton of information on how to do this. A few people told me it could be done and gave me some solid tips, but overall I didn't have too much insight.

I figured this would be helpful for anyone needing to remove their dashboard for some reason or replace it like I did with mine. I wish the best of luck and the lack of brittle plastic to all those who attempt this project. Start by completely unplugging your battery because you are playing with airbags. I'll try to remember everything as well as I can while writing this. Feel free to ask questions to jog my memory if something isn't coming out like you think it should.

Sorry in advance for not taking tons more pictures. I will try to write out the things that I don't have photos. The time crunch was real when the clock was running with my hired help @JunkCrzr89. Thanks for your help!

The main reason for replacement was staining/discoloration and a large crack/peel. 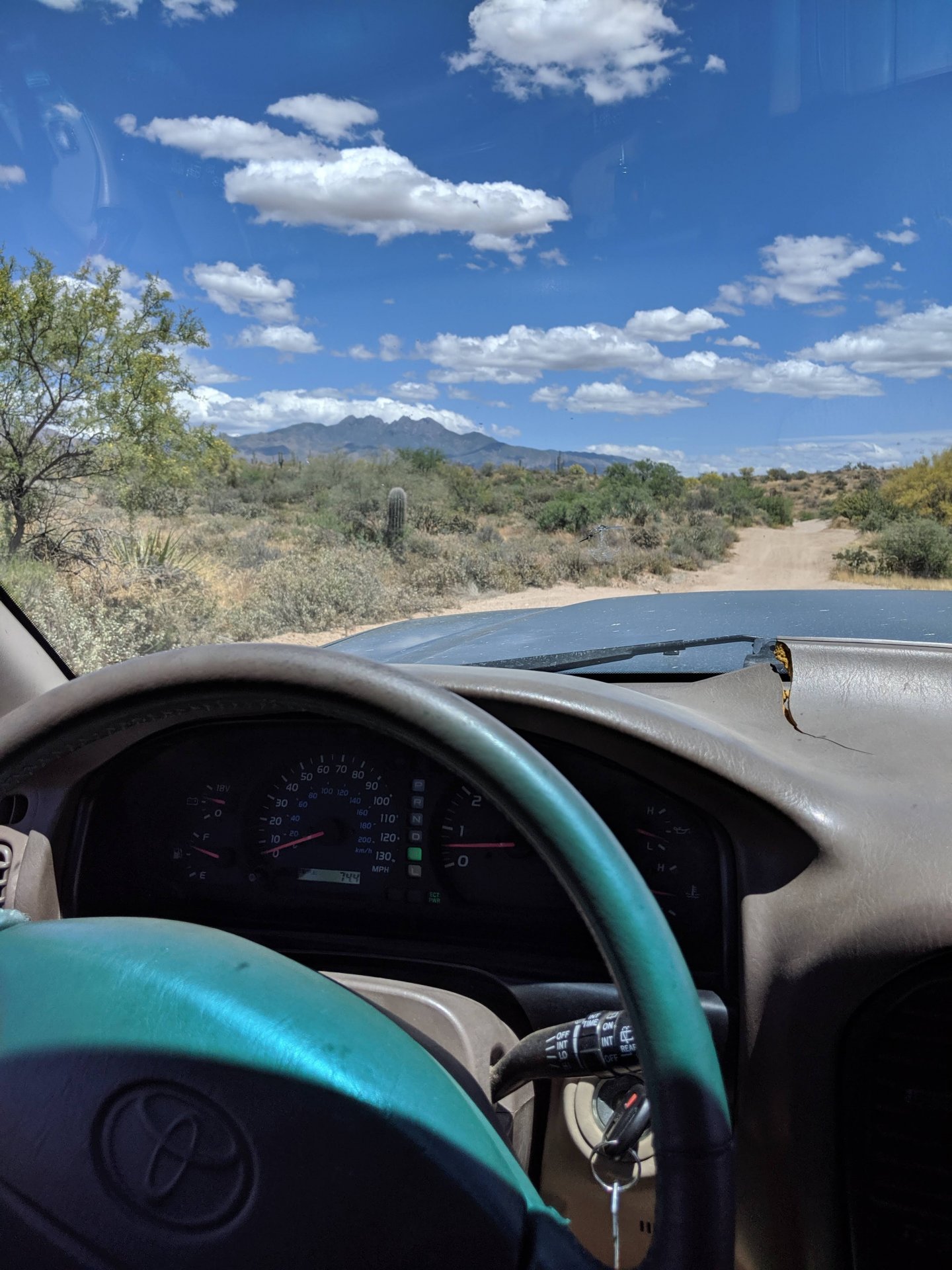 Shout out to @JunkCrzr89. Thank you so much! 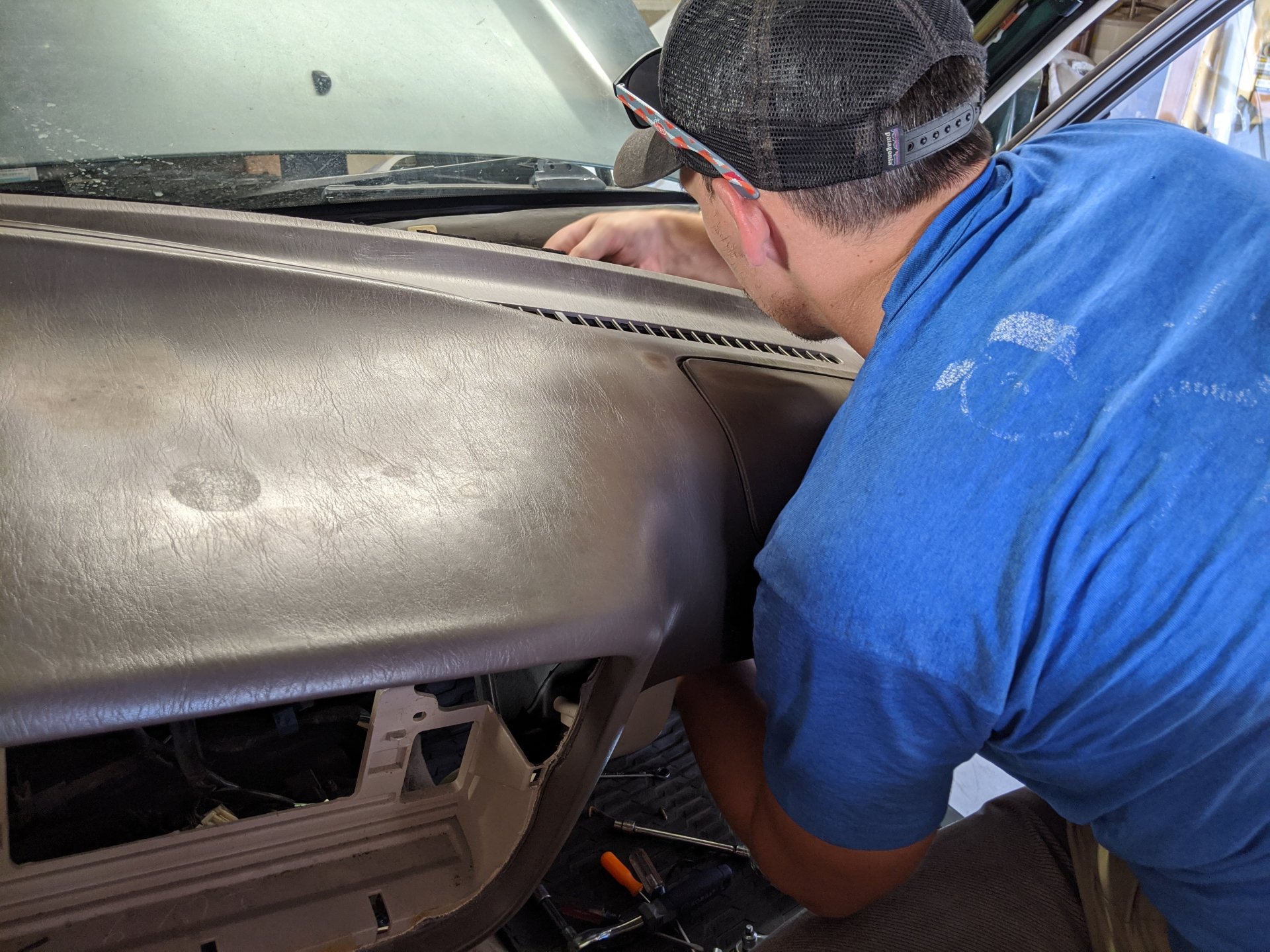 First, I sourced a used better condition dash for a reasonable price. It was really helpful to uninstall that one myself prior to tackling the removal and final install.

You can start either in the center console, the driver knee panel, or the passenger side. Doesn't really matter, it all has to come out.

Center console - this is mostly clips, be careful to not break them. You can use a trim tool here if you feel necessary.

The dash is nearly loose. It is now just being held in by a bunch of 8mm screw/bolts that are securing the wiring harness and about 5x push/pressure pins. These 8mm bolts will make you want to quit. They are difficult to access, hard to locate, and on top of all of that, the plastic can be brittle.... Good luck! I used a ratcheting 8mm wrench, a 1/4" 8mm ratchet, and occasionally an extension on that ratchet. Once you have some of these undone, you can access some of them by reaching around the dash from the windshield/firewall side.

Here is an example of one of them holding the center of the wiring harness. There are 4x right here, on each corner of this box thing. There are many more. To access some of them, you will need to move around the defrost tubing. Most of them just pull out of their fittings except for the main windshield defroster. That one is held on by 3x 8mm bolts. Take this off to gain the easiest access. 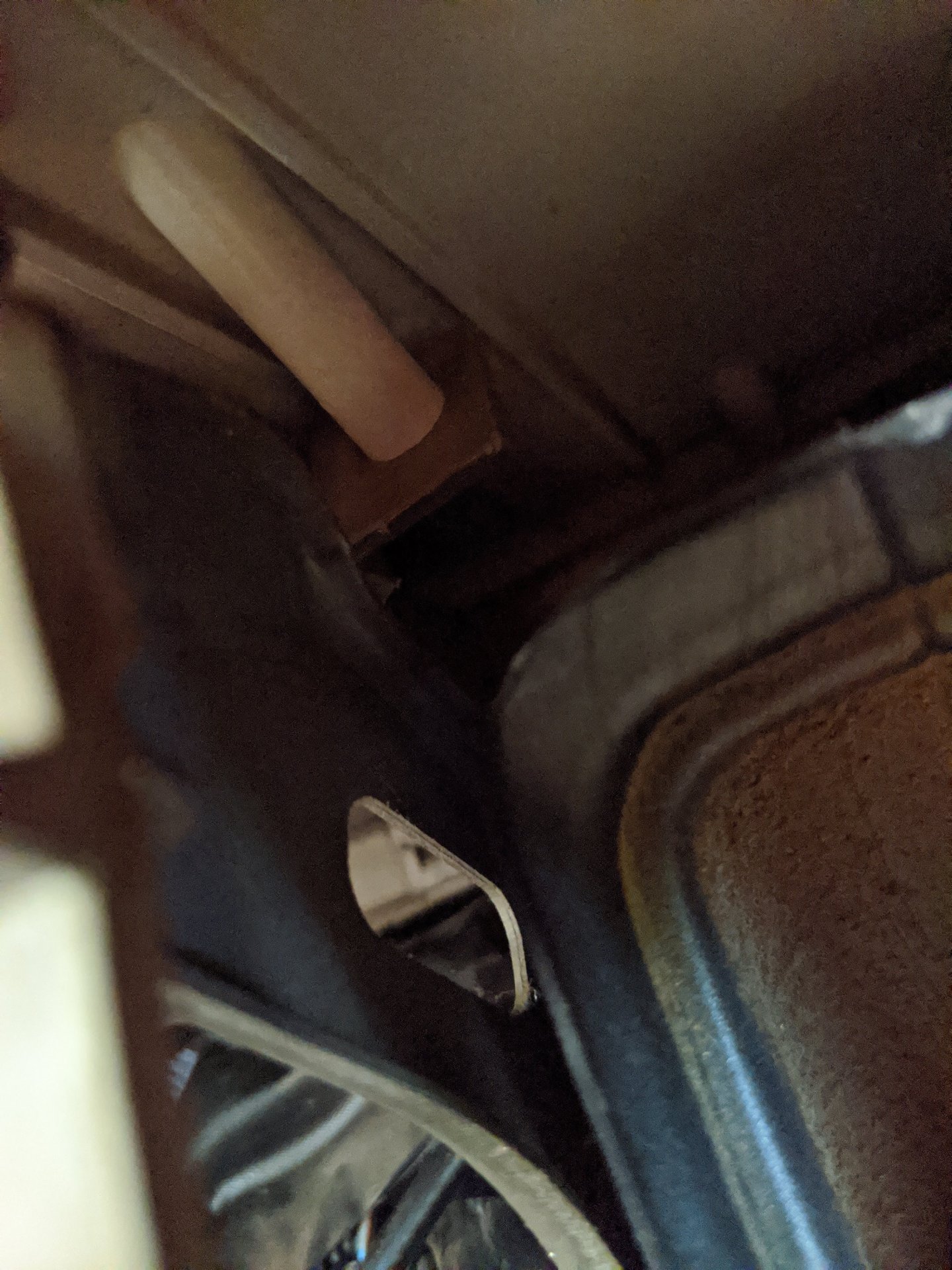 Pictures of the removed dash and this cardboard was helpful to make sure we didn't lose any bolts and that we didn't have any extras. New headunit installed. I haven't played with it much yet... 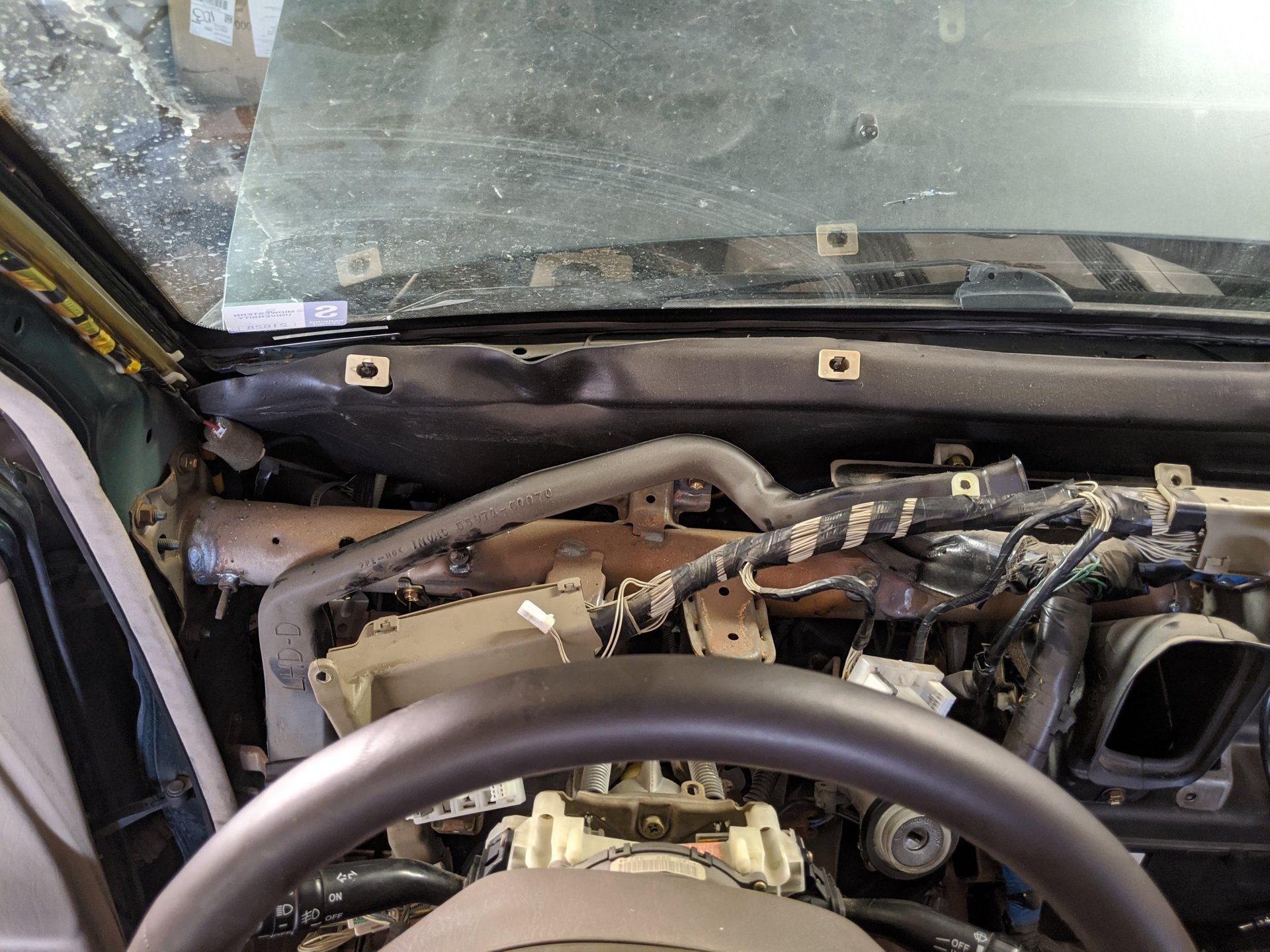 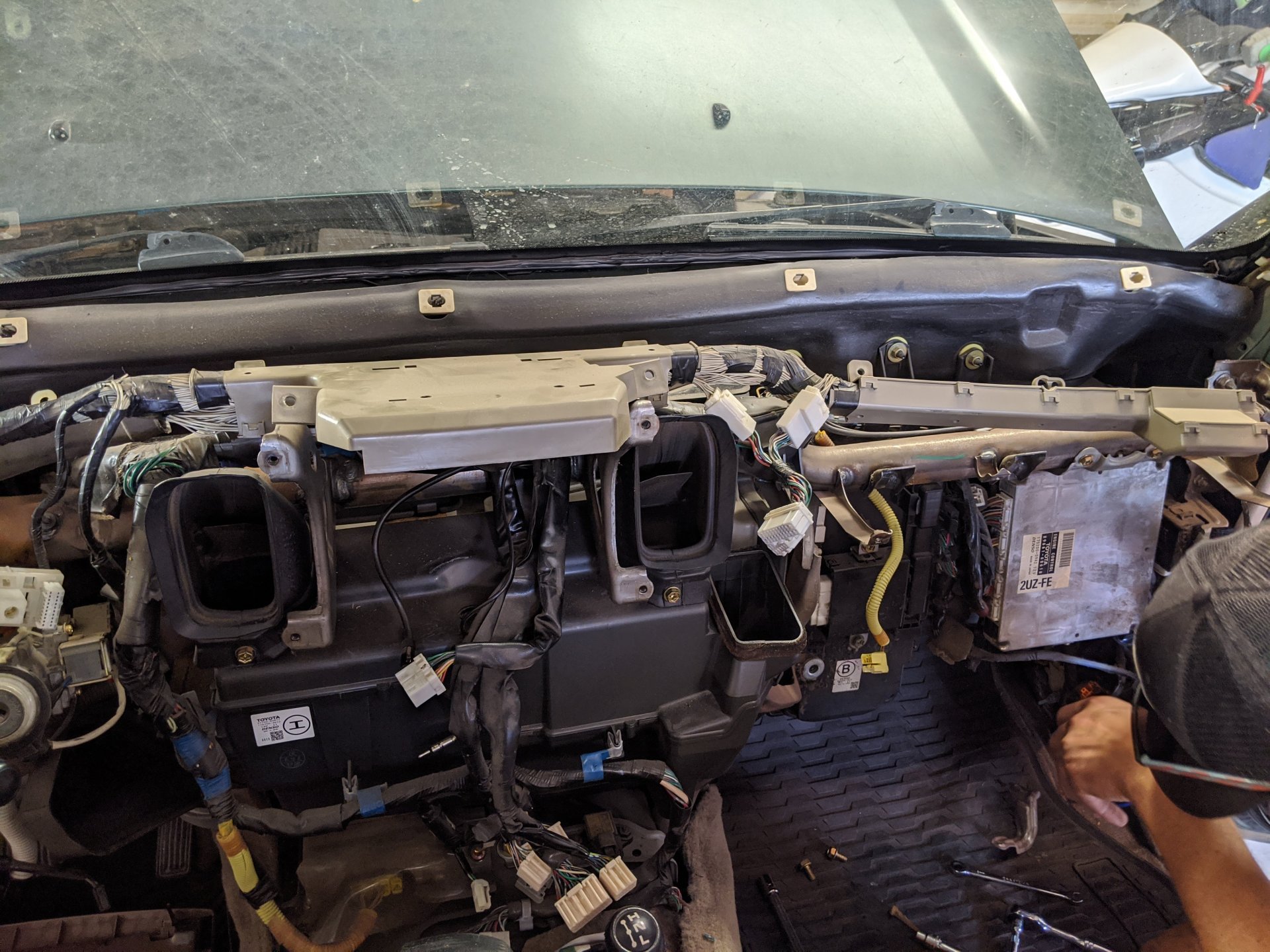 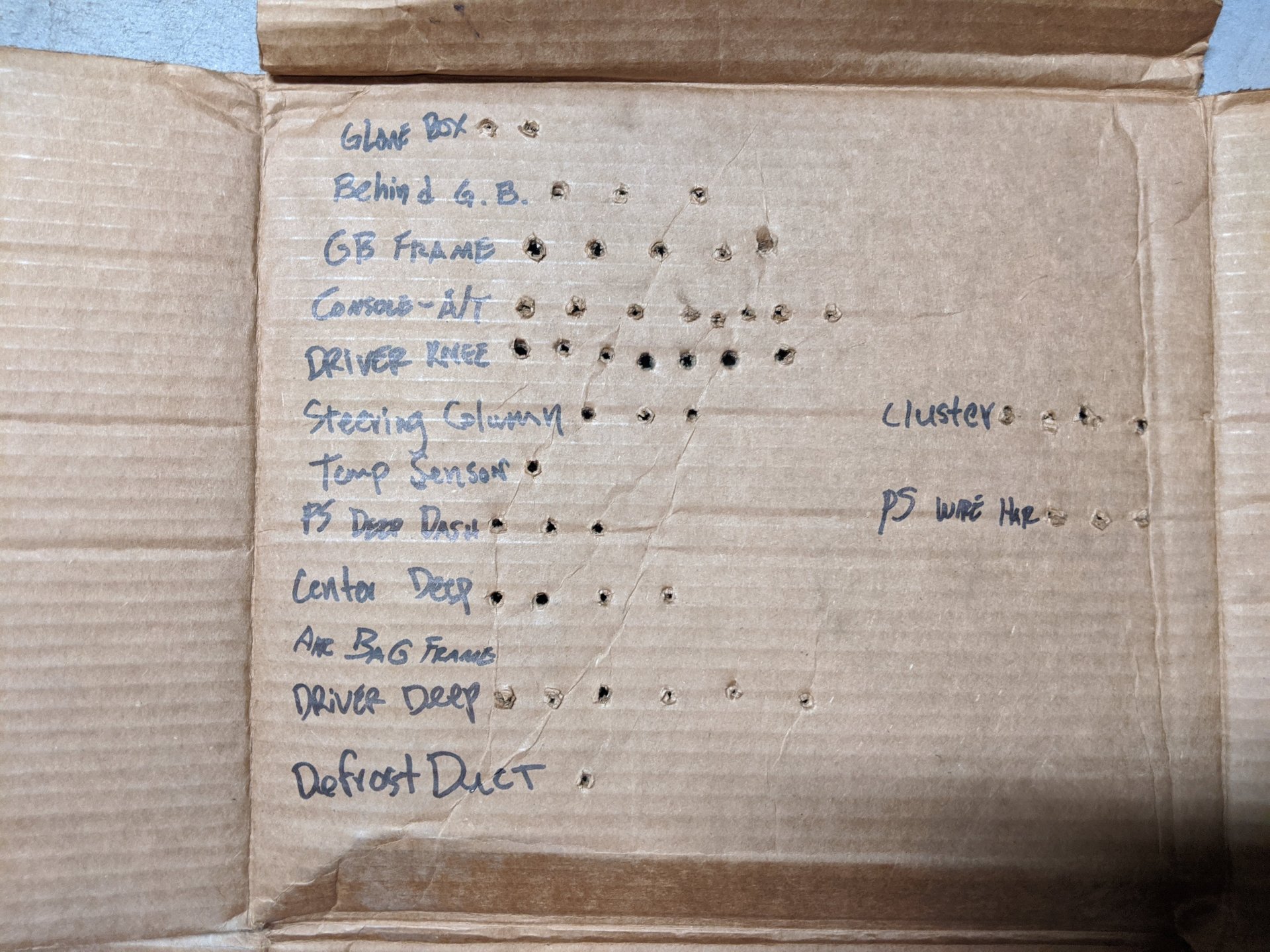 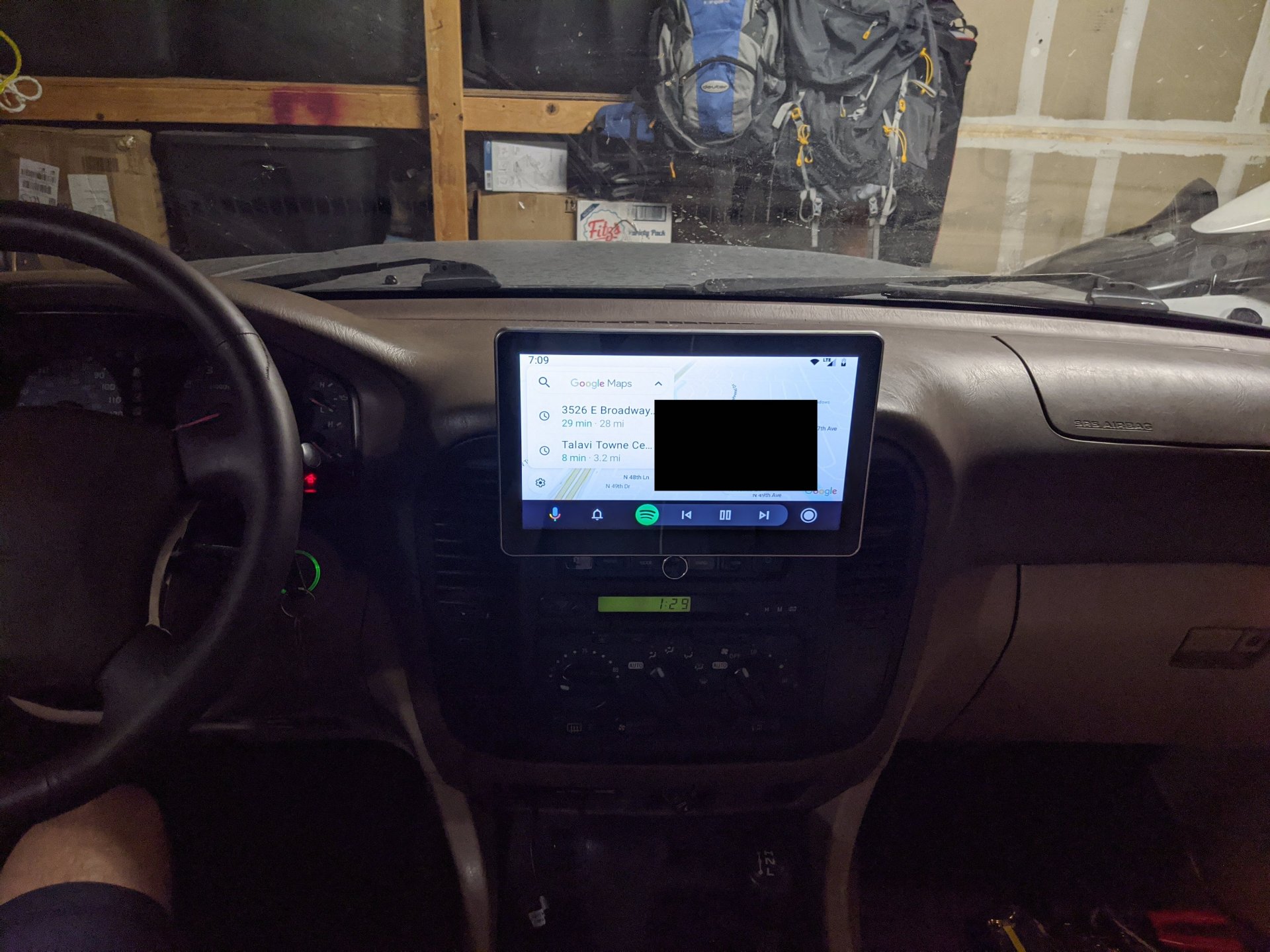 I hope this helps someone out! I'm sure I've forgotten a few bolts here or there, but you'll get there more or less by following this guide.
Last edited: Sep 17, 2020

Few additional notes from the hired help:
1) This would not be a fun or fast job to do by yourself. Get a helper. @knewstance lured me in with pizza and cold beer, which should be sufficient for any civilized human

Even with two of us, it took a couple of hours for removal alone, and we had already done this once before to get the donor dash.

2) Adjust both front seats all the way back before starting this job. You'll have a tough time accessing the center console side screws/bolts with the seats in any other position.

☝This was also clutch for accessing the center console side screws. A JIS screwdriver was critical for removing these screws without stripping their tiny heads, too.

3) On both dashes that we pulled, a few of the 5 black metal pins at the top back of the dash (closest to windshield) did not pull out of their white tabs with the dash (circled in red below). Needle nose pliers and application of a few solid ugga duggas will get these pins pulled out so that you can put them back in the dash before installation.

4) The FSM procedure for dash removal specifies removing the passenger airbag before removing the dash. However, we left the passenger airbag attached to the dash for both removal and installation, and instead simply removed the two 6T bolts that hold the airbag brace to the dash reinforcement bar. Torque spec on these two bolts when reinstalling is 32 ft-lbf. I have no idea if removing the airbag from the dash (per the FSM) would make it easier to access a few of the horrible zinc-plated (?) 8mm bolts that hold the wiring harness to the inside of the dash, but it might.

5) Installation of the dash felt easier and quicker than removal. I think this is primarily because of the seemingly endless number of hidden zinc-plated 8mm bolts that screw into the dash from *inside the dash*, which you have to search for like a never-ending game of Where's Waldo to get the wiring harness and brackets disconnected. Most (maybe all) of those bolt heads are facing towards the front of the truck and down. On reassembly, you'll know where they all go, but they're still a PIA to put back in. Accessing these 8mm bolts was the one part of the job in which having two people is a necessity, in my opinion. @knewstance and I were constantly switching back and forth holding the dash in contorted positions so the other could get a socket or ratcheting box-end wrench on the heads of these bolts.

6) Take your time and don't force anything. A lot of 20 year-old plastic tabs, fittings, and electrical connections that may break easily if you apply to much force.

7) If your heater core ever takes a dump, I wish you the best of luck, because there's still a lot of stuff that has to be removed after the dash is out to access it.

Great guide @knewstance . What audio receiver are you running?

After quite bit of research and my budget in mind, I ended up with the Dual DMCPA11BT. I don't have much to say on it yet because my battery was mostly drained by the time I finished everything.

After quite bit of research and my budget in mind, I ended up with the Dual DMCPA11BT. I don't have much to say on it yet because my battery was mostly drained by the time I finished everything.
Click to expand...

How do you go about hooking in your phone? How did you run cables?

How do you go about hooking in your phone? How did you run cables?
Click to expand...

Yes, wired AA/CP.
I'm not fully there with a permanent solution yet. Right now I just have the usb running from the headunit to the ashtray and didn't put the ashtray back in. I'm probably going to mount up something cleaner, I just need to do some thinking on how I want to do it.

knewstance said:
Yes, wired AA/CP.
I'm not fully there with a permanent solution yet. Right now I just have the usb running from the headunit to the ashtray and didn't put the ashtray back in. I'm probably going to mount up something cleaner, I just need to do some thinking on how I want to do it.
Click to expand...

My hope is to bring the cable in through this empty slot and then mount my phone with the @BenCC kit and Ram mount.

Patiently waiting for the Yaesu FTM-400 mount. These got super popular last year due to the instant rebate and the Wires-X.

I'm assuming your phone charges while plugged in?

Is there any way to plug the cable in the front of the unit and remove when not in use?

@Trunk Monkey, can we add this to the FAQ?

Agreed, this should be part of the of the FAQ for sure. Thanks for putting this together!!!

Thanks @knewstance for the well documented instructions! Super useful for me this weekend.

dogdaysindurham said:
Thanks @knewstance for the well documented instructions! Super useful for me this weekend.
Click to expand...

You're welcome! I'm sorry you didn't have a great weekend lol
You must log in or register to reply here.