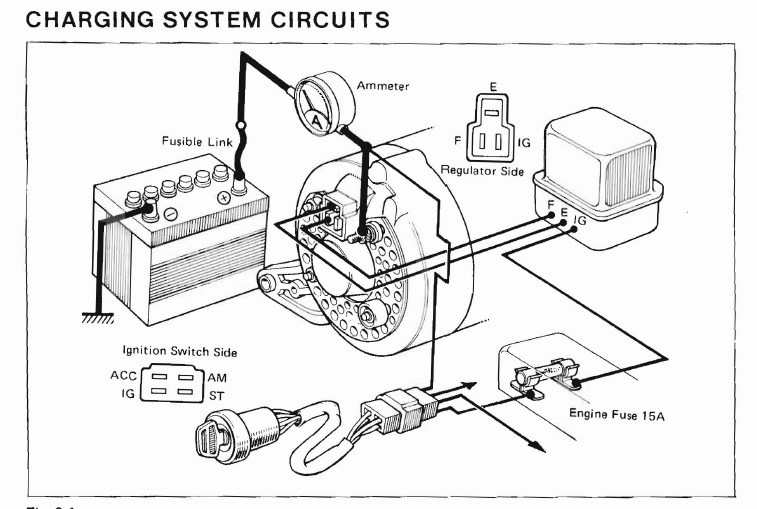 Simplified wiring diagram for wiring high output alternator to ’85 Toyota 4Runner.
Note that the “l”, “S” and “IG” connections are not shown in the OEM diagram. Only the “L”
wire is used from the OEM wiring harness at the alternator end in the high power output
wiring. Note also that the 8 ga. battery wire is not used at the alternator end, but is used to
provide power to the 40 amp fuse at the fuse block end by switching it from
upstream/unfused side of the 80 amp fuse to the downstream/fused side. 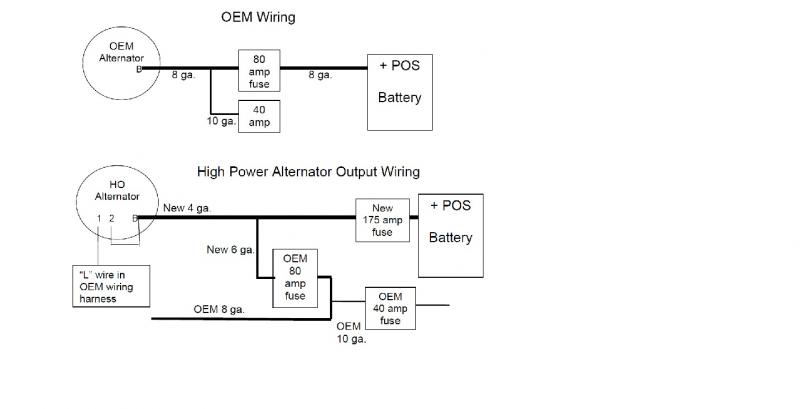 Wiring using GM alternator
The OEM alternator comes with four connections: B, IG, S and L. The Powermaster PWM-
47294 alternator comes with three: B, #1 and #2. The Powermaster alternator is one-wire or
three-wire capable. One wire capable is just that: you attach one large wire from the B
connection to the battery POS terminal and you’re done. However, there are several
advantages to wiring your alternator with the three wire capability; namely you keep your
alternator lamp active plus you won’t have to rev your engine to get your alternator to start
working. See the Mad Electrical site for a detailed discussion on the differences and
advantages of each.
Per a conversation with a Powermaster Technician on their toll-free tech line, here is how
your wire the Powermaster PWM-47294 alternator for use as a three wire alternator:
PWM-47294 Goes To
B battery POS terminal via 4 ga cable & 175 amp fuse
#1 “L” wire on the OEM wiring harness (turns field on)
#2 “B” terminal on the 47294 alternator (senses voltage for the regulator)
Note that except for the “L” connection, you don’t use anything else on the OEM wiring
harness, at the alternator end. Carefully terminate and isolate the connections and locate
them out of the way.
At the other end of the 8 ga OEM alternator wire to the fuse box, however, you have to keep
it connected since it splices into the input of the 40 amp OEM fuse.
However, due to the limited connections space on the back side of the fuse block, I installed
the OEM 8 ga alternator wire on the “downstream” side of the 80 amp fuse and installed a
new 6 ga wire from the POS terminal of the battery in its place upstream of the 80 amp fuse.
On the 80 amp fuse block, the upstream or unfused connection only has one terminal screw;
while the upstream or fused end has 2 screw connections. This means that the 40 amp fuse
power also goes through the 80 amp fuse, which is ok, since there is no longer any alternator
current going through the 80 amp fuse. See figure 7 for simplified wiring diagram on how I
did my ’85 4Runner alternator wiring.
You must log in or register to reply here.
Share:
Facebook Twitter Reddit Pinterest Tumblr WhatsApp Email Link