Hi all.
Long time no speak, but have really benefited from this forum multiple times, so I thought I'd add my recent experience, in case it may help other members out of a jam.

I recently left from Tasmania, to mainland Australia, via ferry, and landed in Victoria.
I stopped in northern NSW on xmas day at my brothers house, prior to heading to northern New South Wales to meet up with my partner and the inlaws.
The next day, boxing day, we headed out to do a spot of metal detecting.
As we were driving along, on a bumpy dirt road, out of the blue the ABS light came on, as did a very annoying high pitched audible alarm.
Soon after... a few minutes or so, I noticed the brakes stopped responding properly.... eg, I'd have to stand on the brake pedal with both feet, while downshifting.... etc to stop.
We limped back the 50kms or so, using the gears, hand brake, and generally taking it slowly, back to my brother's house.

So... here I was, about to go on a 4000km round trip... on a public holiday weekend, while my partner was waiting for my arrival, expecting me in a day or so... and no brakes to speak of.

I made a list of virtually every wreckers in and around Melbourne.
Virtually the only option I had, entailed a three hour drive, each way, back to the southern suburbs of Melbourne, to purchase a second hand master cylinder... at a price of $1250.
However, they also said that they wouldn't be able to remove it and get it to me for at least 2-3 days... WAY after I was meant to meet up with my partner.
So I looked, as you do, into the new price, and got a price from $3500 up, plus another $1500 installation... from the dealers, but again, 3-4 weeks wait at a minimum.

So... my wife called me, and asked, had I left yet?
Hmm...
So I said, no, I'd decided that I, along with our son, would spend another day with my brother, and do a bit of detecting....

Anyway... I was up s***e creek without even a barbed wire canoe... but luckily I had my older brother with me.
We had a look under the bonnet, and I had a look here on these forums....in particular this post I think:

Yesterday morning (cold morning) started up the LX and an ABS light and warning buzzer came on. Never happened before. Pumped the brakes a few times and it went out. All was fine for the rest of the day. This morning (even colder) same thing (ABS and Warning) but this time it would not correct...


and we realised that the probable cause was the brake accumulator booster motor, or whatever you call it, failing to run.
Apparently, when you start the engine, that motor fires up, and primes the brakes, so, if the brakes fail, you get 40 or so presses on the brake, after the light and audible warning comes on, to realise your predicament....

All the advice I read involved the above ridiculously expensive master cylinder replacement, which involved, obviously replacing the entire master cylinder unit, which also entailed bleeding the whole brake system, and a lot of stuffing around, and time, which I didn't have.

So, looking at the options, my brother suggested, why don't we try to get the motor out, without removing the entire master cylinder?
We first tried running battery voltage via jumper leads directly to the brake booster accumulator motor, or whatever you call it... and we got nothing...
Which ruled out fuses, wiring issues,etc.
So, how to remove that motor?
Most guides suggest removing the master cylinder.. but I didn't have the time.... so we perservered.
My brother realised that the motor was only held in place with two hex screws on the left hand side, and the right was resting on a rubberised mount.
By disconnecting the positive and negative wires from the motor, and then bending out the rubberised mount on the right hand side of the motor, we could remove the motor entirely, by removing the two allen key screws on the left hand side.
With the motor out of the unit, we removed another two identical sized allan key screws, and seperated the housing from the motor itself.
We then washed all components in petrol and inspected..
It had been incredibly fithly.. but after cleaning, the whole unit looked OK, and, after checking the bearings, which all seemed ok, and the motor brushes, which seemed near end of life, but with some life left in them, we put a bit of grease on the bottom beariing, and reassembled.
Testing it, the motor spun up amazingly!
We reinstalled it, and used a cable tie on the other end where the rubber grommet thing held it in place, reassembled it, and started it up.
The alarm came on, as did the ABS light, but after 10 or so seconds, the alarm stopped, and the light went out....
I tested the brakes, and they seemed better than ever!
After nearly 5000KMs, its still going strong.
I'm hoping to find details on the motor brushes, to replace them one day... and I wish I'd taken their dimensions while I had it apart, so hopefully someone else here will work that out.
Finally, I suspect that the end right hand bracket may not need to be bent out... you may be able to access another two allen keys, approaching from underneath the master cylinder, straight up, either side of that motor, and remove it without bending it... but I haven't tried it.
Either way, its a zero dollar fix, that you can do out in the middle of nowhere, which is what we all seek when we need it, so hopefully this may help someone else someday.
I arrived on time, then drove back, as I said, and nearly 5000KM later, still going strong.
Only issues I see that need resolving is... can someone point out replacement bushes for this motor... and also bearings, (which someone has posted), and, worst case, replacement commutators, as I did see one post with a worn out one.
For me though, pulling it apart, washing it all with petrol, drying, greasing the lower bearing, then testing, worked for me.

and, just to add, another relevant post on here that may help...:

Hey guys Yesterday i was driving my lc 2001(1hd fte) And when i apply brake the brake paddle pressed all the way and car did't stop. But i somehow manage to stop the car. When it is stopped brake paddle and brake work perfectly. No alarm or any warning light went off. But when i parked the...

Yesterday morning (cold morning) started up the LX and an ABS light and warning buzzer came on. Never happened before. Pumped the brakes a few times and it went out. All was fine for the rest of the day. This morning (even colder) same thing (ABS and Warning) but this time it would not correct...

Hey this is interesting. Don't have this issue yet ... but it might happen to me too someday.
Do you have any photos of the motor?
J

cwmoser said:
Hey this is interesting. Don't have this issue yet ... but it might happen to me too someday.
Do you have any photos of the motor?
Click to expand...

The links in the original post have a few photos, and pages from the service manual, that give you an indication of it.​

Its essentially a black 12v motor, located directly below the break fluid reservoir, running horizontally, and connecting on the left hand side to the brake accumulator /steel can with big yellow sticker, that is to the left of the reservoir.​

Theres two screws for postive 12v and negative at the front left.​

The two allen keys are located on the left hand side, and the rubber mount thingy is on the right.​

(This information is from my RH drive australian vehicle, so things may be backwards where you are of course. )​

Oh, just thought of one more thing....
You need reasonably long allen keys... one of those cheap sets where they're all together on a swivel thing probably wont cut it.
and they can be pretty tight to loosen.
I had to use a pair of pliers on the end of the allen key to get enough torque to loosen them.
A bit of WD40 or other spray lubricant stuff would perhaps help... but in my case I didn't need it.

It is good to know you were able to spring some life back into the motor by simply cleaning it. This is helpful to know in case the dreaded alarm sounds when you are on a trip! Thanks for sharing.

Worked out well for the OP (glad for that) BUT be advised that many failures do not involve the internals of the booster motor, but are the result of corrosion at one or both of the 'lead' wires (at the motor or ABS unit itself). In some cases you wouldn't be able to remove the motor to begin with (short of clipping the wires) and even then the issue of resistance remains.

Certainly 'worth a try' in some circumstances for some folks, but I wouldn't tout this as a 'easy fix' (possible).

Interesting accounting of how it worked for the OP and you have to admire the ingenuity. 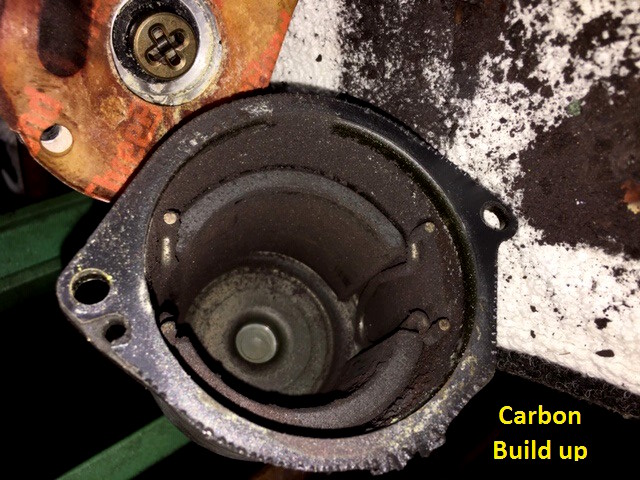 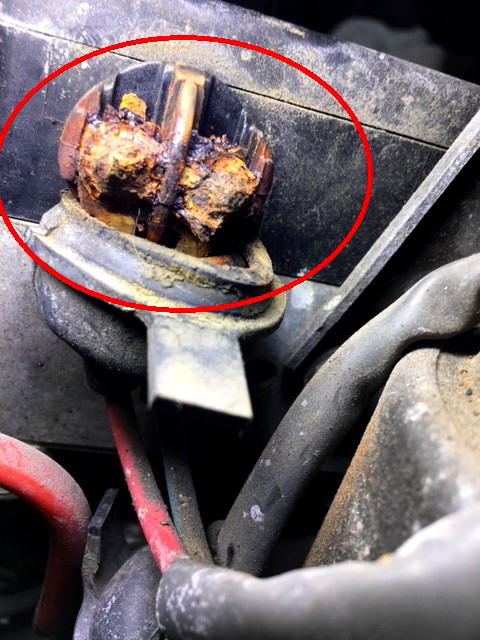 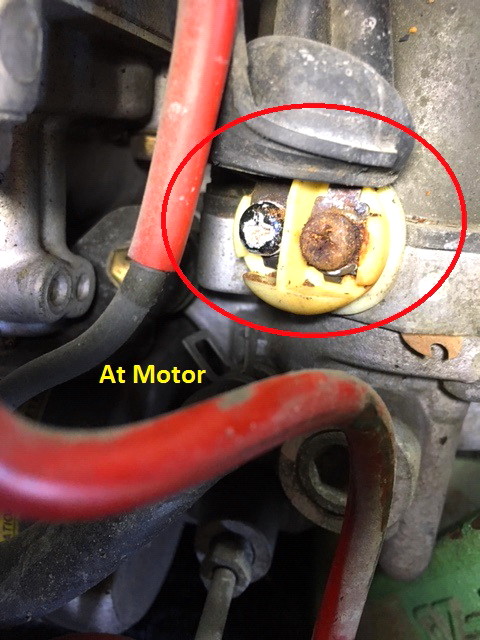 Hi flintknapper
Thanks for the input and additional details.

Yes, the unit can suffer from corrosion of the two wires...
On mine, the connections on the right hand side were too corroded to loosen, so I just removed the ones on the left, that were connected to the motor itself.
They came off surprisingly easy, esepecially given my vehicle spent most of its life before I got it living on the beach, and has lots or rust issues.

Its probably worth if for all of us to remove them before we have an issue, if possible, and cleaning and greasing them to reduce the likelihood of them corroding as bad as per your photos.

But yes, running 12v directly from the battery to the motor terminals should be tested before removing the motor.
We did that and the motor still refused to spin up, indicating it wasn't a problem with the leads, or circuit in general.

And yes, it may not be as simple as I had it for others, as the commutator itself could be worn away, or damaged wiring internally, or the bushes themselves could have worn out completely, or some other ABS failure could also cause similar symptoms.
Or one or both bearings could have seized, so no... I wouldn't tout this as an easy fix...

More just a possible fix to try if your stuck somewhere remote and would like brakes for the ride home.
You must log in or register to reply here.

What are we liking for method/location to relocate OEM backup camera after tire carrier add?

Yesterday at 2:35 AM
wildsmith

Monday at 7:35 AM
RidgeRouted
R