Ok, so I’m still trying to come up with a witty thread title. Something to do with “rust” “tundra” “chain smoker” “grandpa” OK so I got a better title going. I assume the PO was a grandpa, so let's just go with it.

Our story begins over a decade ago, when I sold my 86.5 hardbody in college.
Ever since, I’ve yearned for something else with four wheels and a bed. Anything will do and after multiple chances missed, I finally have another pickup truck.

As you all know, I am an oxidation aficionado, a rust connoisseur, little money and seemingly less sense when it comes to vehicles (love my cruiser no matter what).

So, it would be out of character for me to find a well cared for, clean truck (like the sedan I traded for it).

Our story begins a few months ago when I toyed with the idea of selling and then purchasing or trading my sedan for a truck.
It was a nice vehicle, well cared for one owner Ford Fusion sport. It would get up and go, and handled great. But I needed a lot in the way of sensors and a somewhat heavy mystery oil leak, and the timing chain guides sounded suspect.
It was one of those cars that I bought because price and timing, not because it was at the top of my list. And honestly, I’m just not a sedan person.

So on the hunt I’ve been. Pouring over trucks and pontificating- ridge line? Silverado? Try and find a Toyota? Love Toyota, must have Toyota.

I found this tundra listed in marketplace, and noticed the specs were ones I was ok with- 2wd, 4.7, 285k. One owner. I like that last part.
After hitting up the seller, some back and forth and we agreed that if we like each other’s vehicles there’ll be a trade.

I drive abour two hours including over the Shenandoah mountains to check it out.
Upon my arrival, I realised that I seemed to have found the seemingly only sketch used car lot and tire zone. Check the truck out, drive it, and despite its deplorable condition I agree to the deal.
The brakes are in definite need of replacing, but the seller has disclosed this in our prior conversation. These things are bad…like throw an anchor on a glass highway and drag it down the road.

The tires, like new…back in maybe 2013? Passenger front sway bar link long stopped being one piece and the exhaust decided to leak to add to the persona.

After calling my insurance and reminding myself about triple A, I head off. Uneventful except for coming down 33 east over the Shenandoah mountain (for those of you are familiar with Virginia).

Brake light flicks on and off intermitantly until I was closer to home it stayed on permanently, and the truck seems to think there’s someone In the passenger seat that’s too light for the airbag so the light stays on.

Made it home. Love this truck. I can reach in the bed while standing on pavement and that alone is worth it.

My theory is that this was a grandpa truck that used it to launch his boat on the Eastern shore. Bed has rust and frame has surface rust but no holes and the front looks clean. 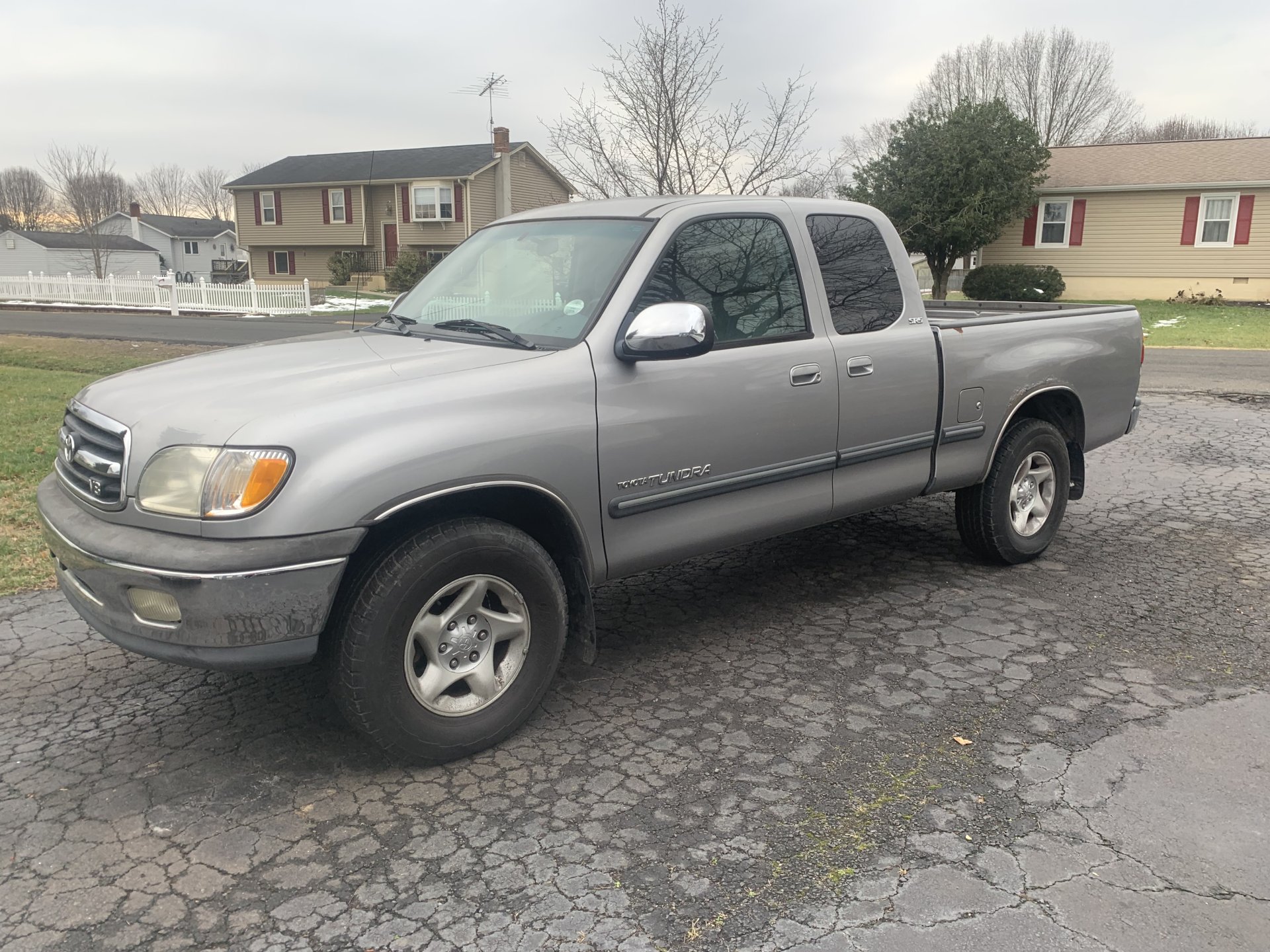 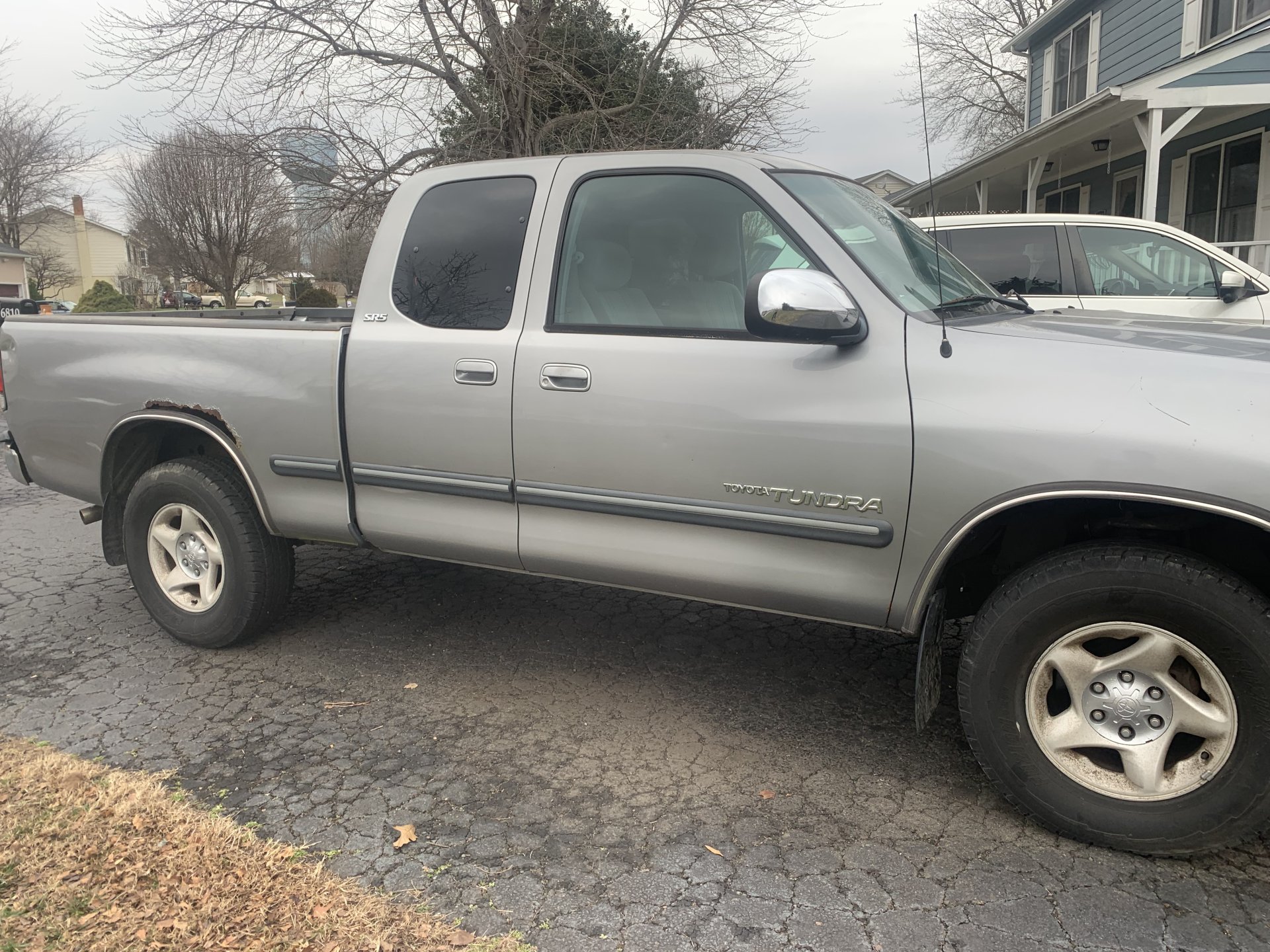 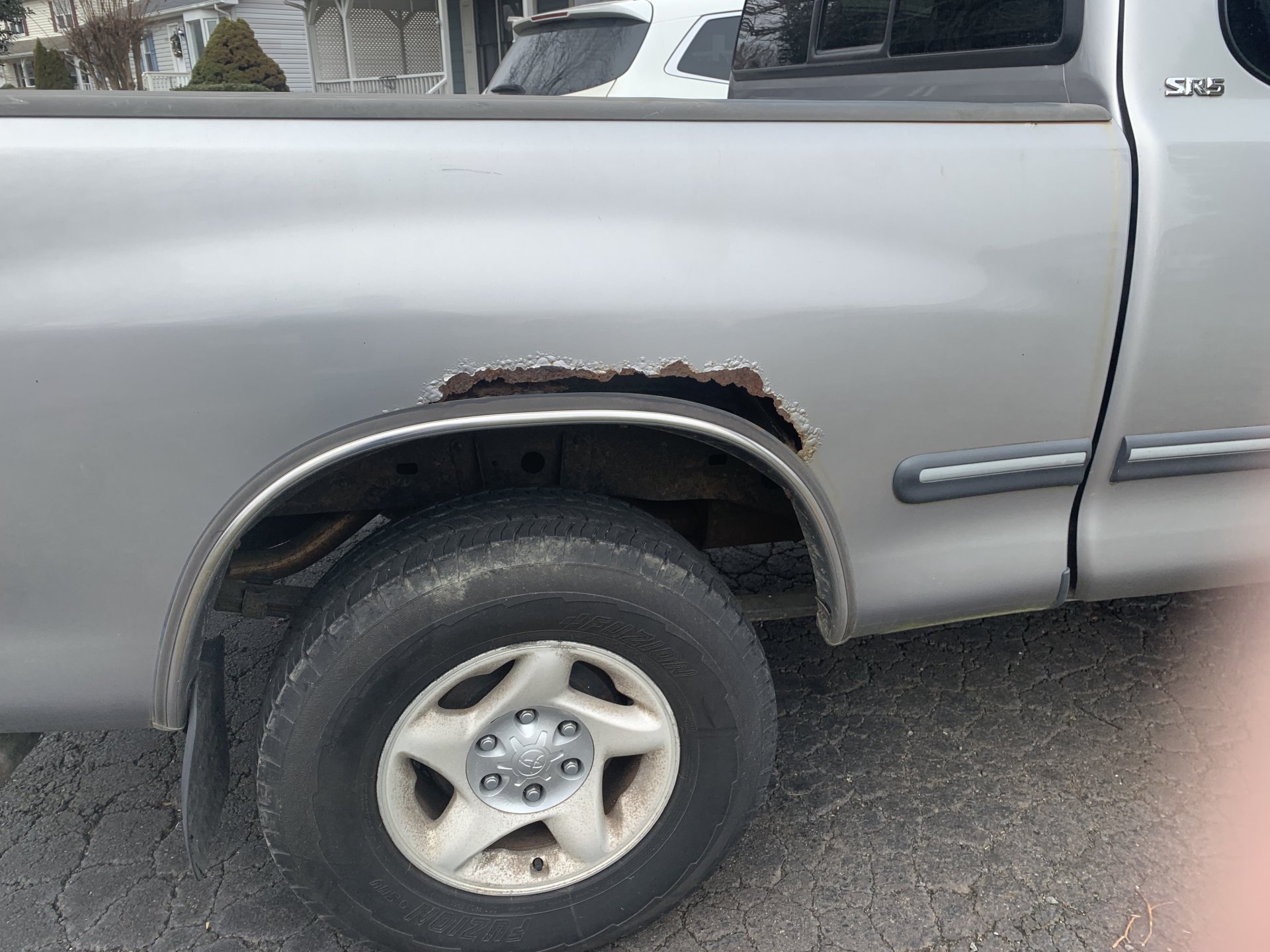 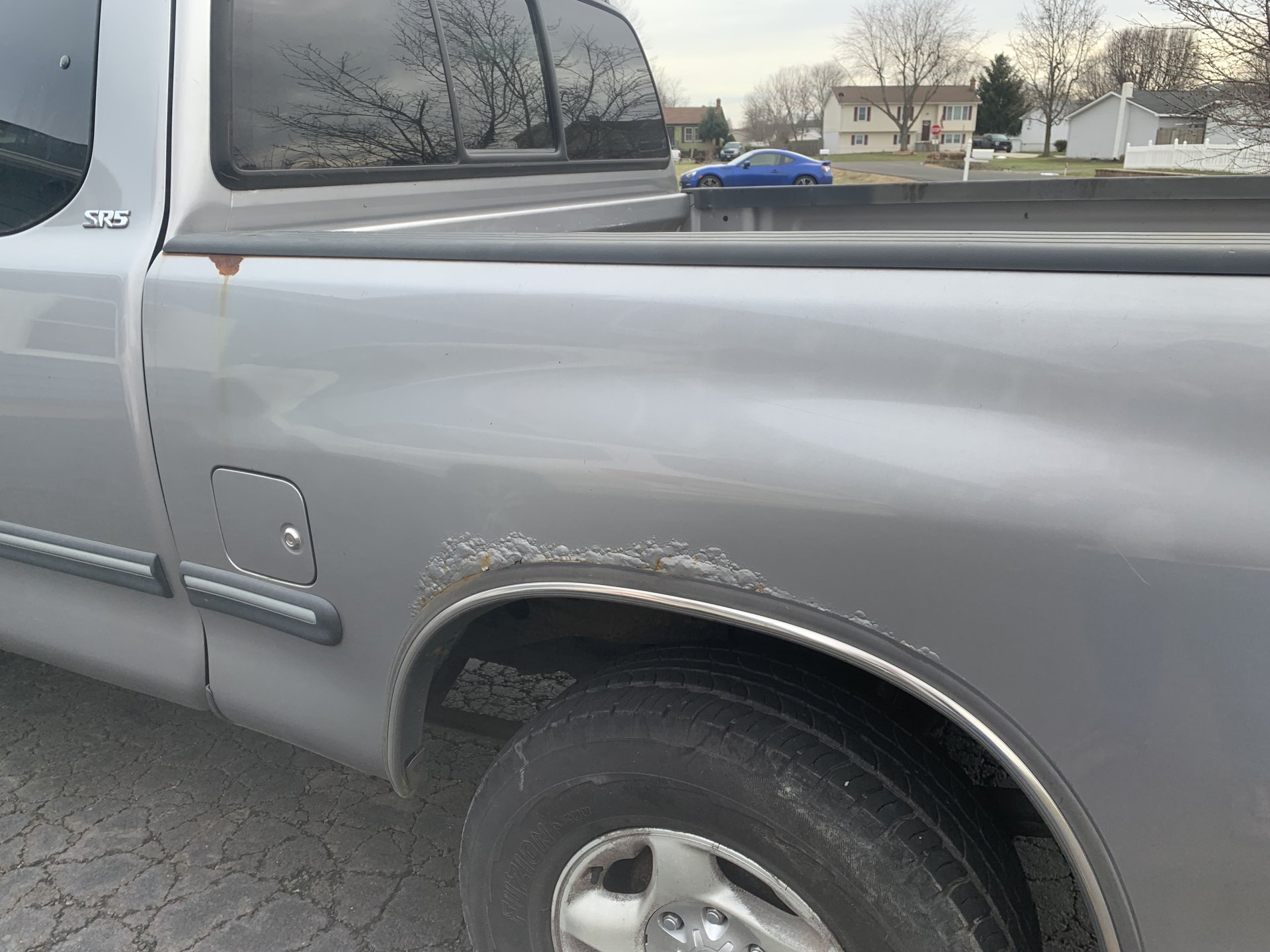 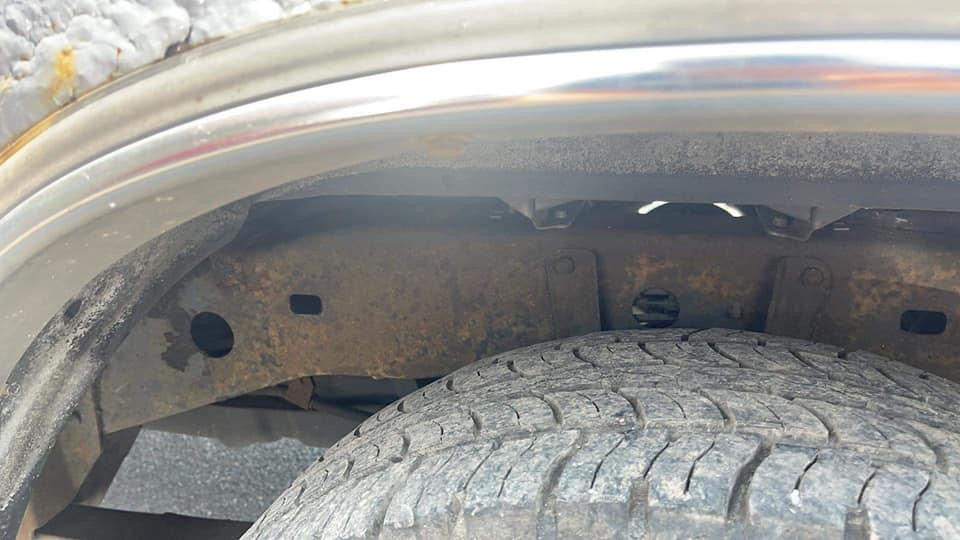 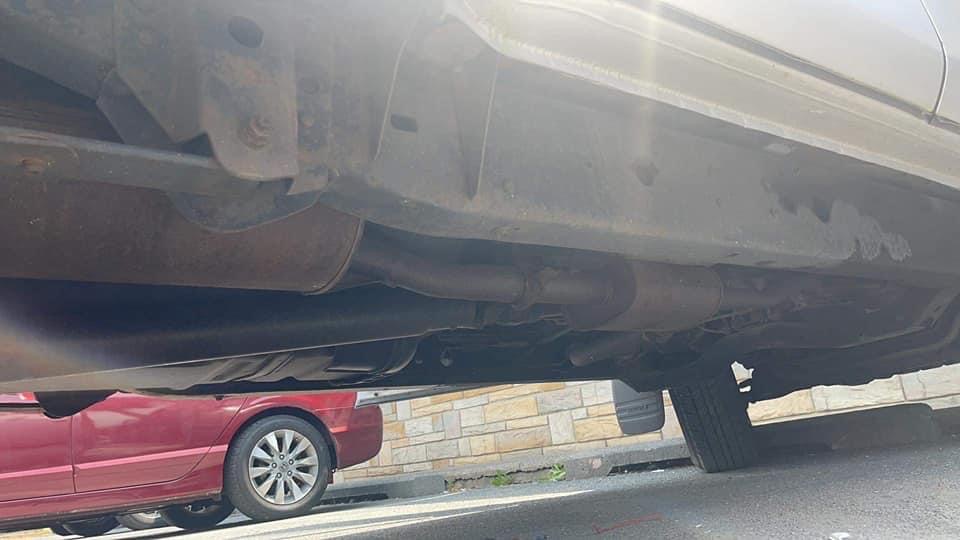 My theory was confirmed when i found these handicap tags and a card for a marina in Salisbury, which is where the owner lived.
The keys have been well loved, and of course after I got it home the ignition lock didn’t want to move. Thankfully got it to start one more time to move it back to the work area. I’ll be getting OEM replacements from @ToyotaMatt 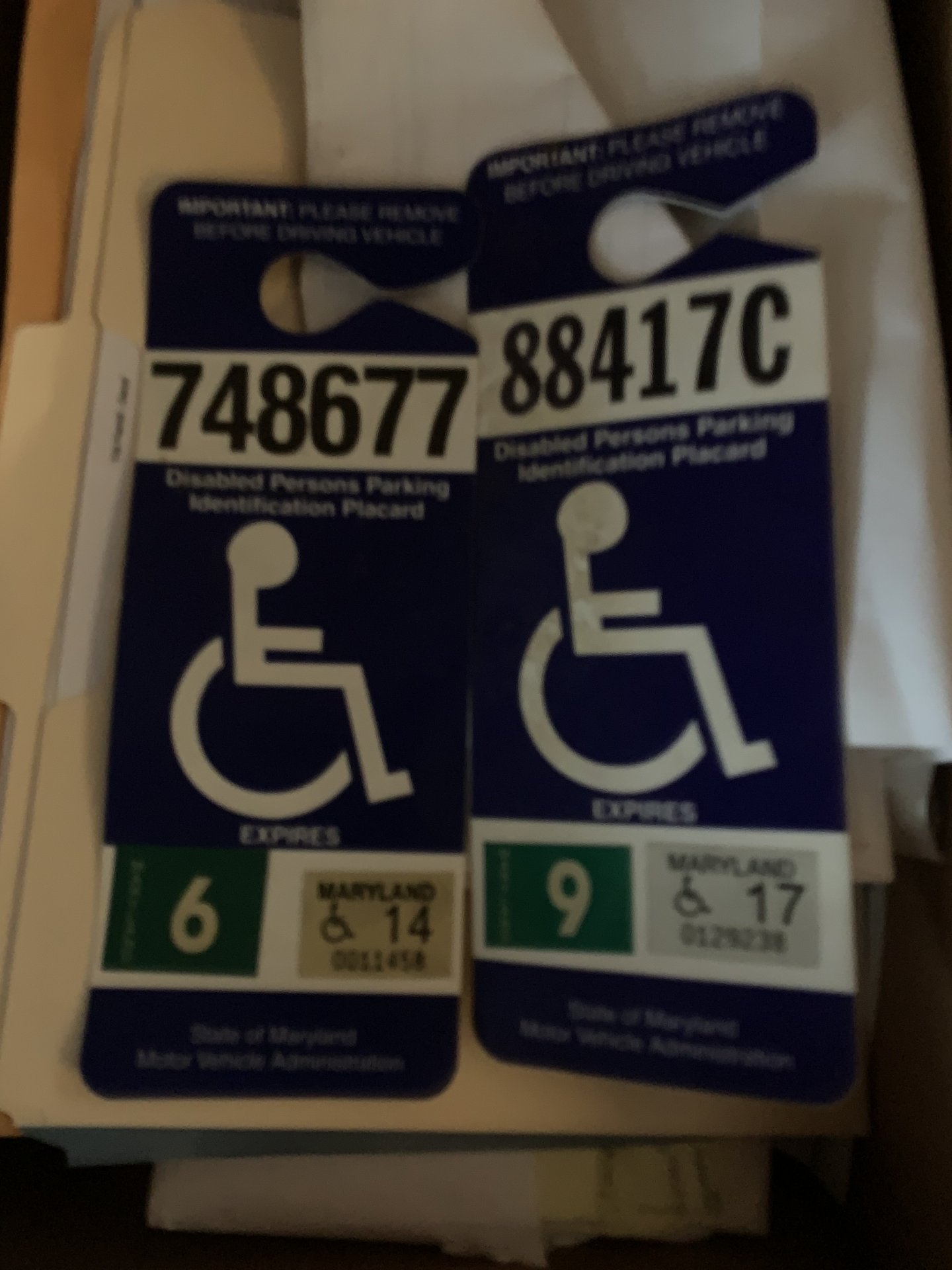 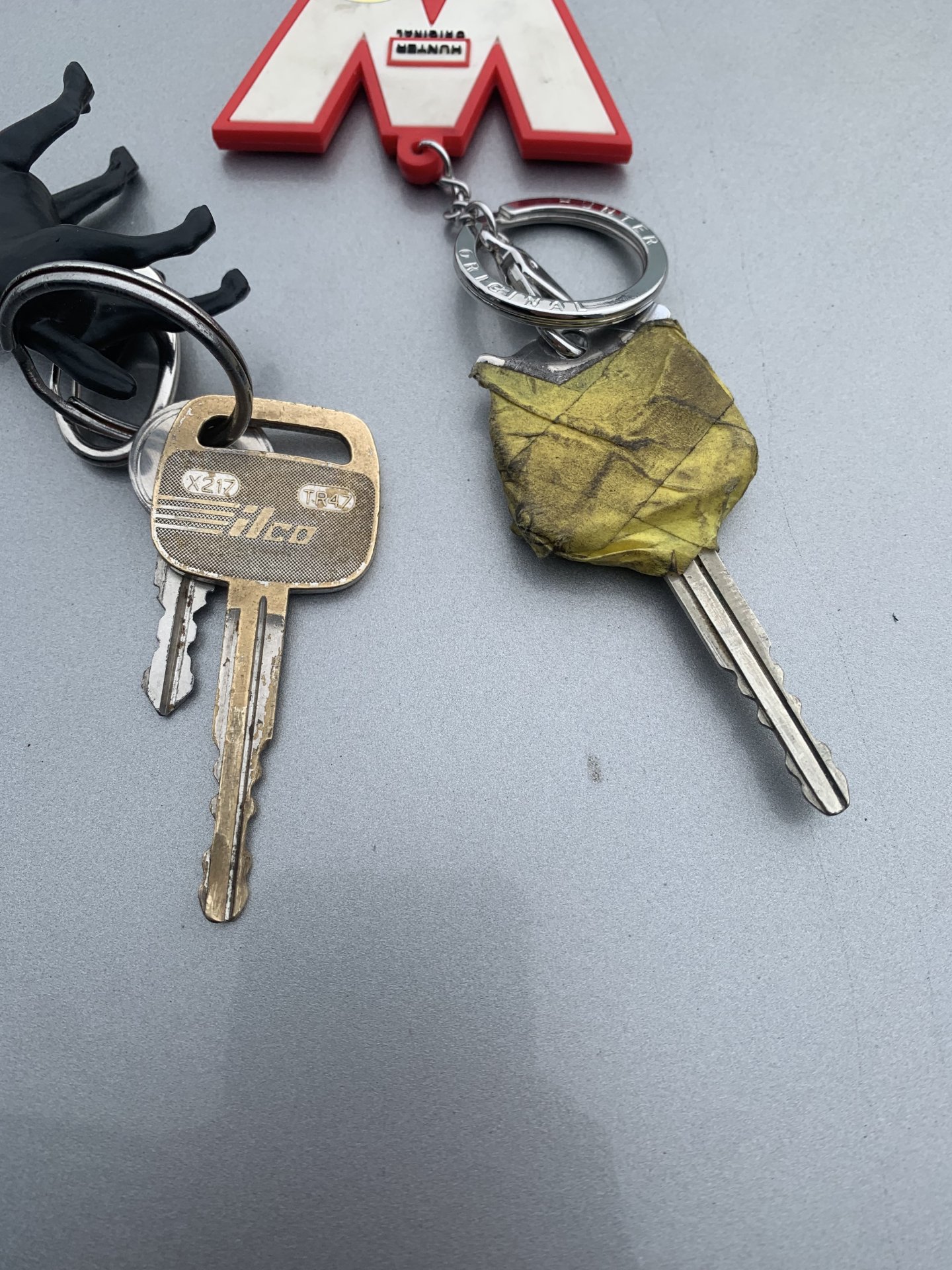 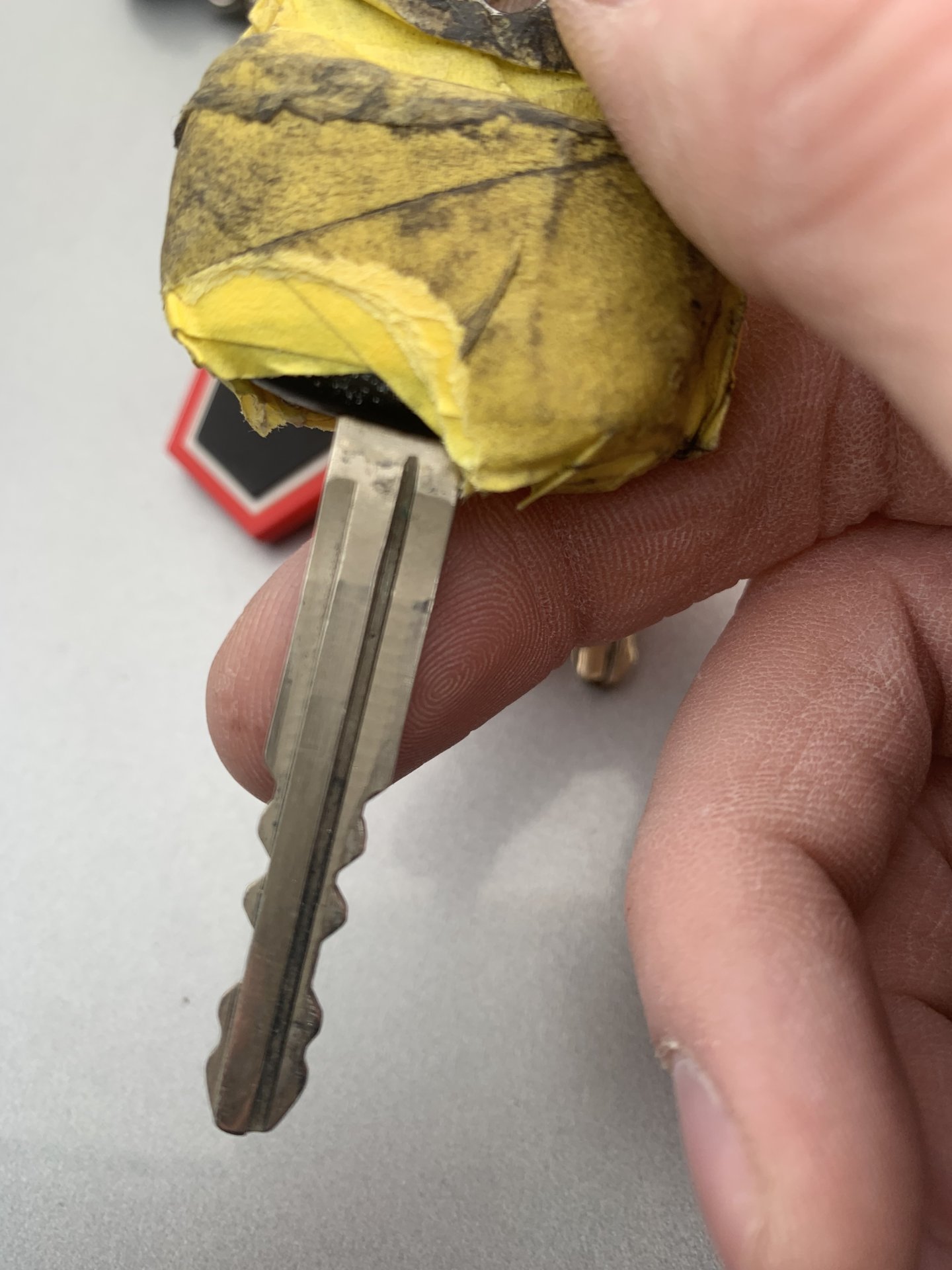 Off the top of my head, this truck will need the following before I can start driving it (and to pass inspection):
-Ignition cylinder lock assembly
-Tires
-Front pads and Rotors
-Driver and passenger sway bar links
-New wipers
-Troubleshoot and repair exhaust leak

Non essential items:
-Rear shocks look like they're rusting at the top.
-Front bed tie down points are missing
-Fix wheel well rust holes.
-HVAC lights are out
-One cargo light is out
-Back seat overhead light doesn't turn on when set to "door" setting
-Driver rear mud flap has a hole in it
-Fluid baseline- noticed it has a cheap oil filter on it. No good.
-Tune up- plugs, air filter, etc.
-Deep clean interior- PO was a smoker.
-Figure out driver side seat replacement. The bottom cushion is sagging badly and the 2 hour drive home made me feel it in my back.
-New headlight assemblies due to fogging
-Brighter headlights
-New rear bumper cover- looks like this truck backed into a few trailers in its life. Current condition of the bumper is causing the bottom corner of the tailgate to get bent.
-Troubleshoot tailgate not opening- handle doesn't seem to engage, I can open it by pulling on the rods manually.
-Fix sagging headliner
-New headunit, possibly one with back up camera
-Timing belt and water pump service with coolant drain and refill with Toyota red coolant.
-Rear door latches don't always disengage, so the rear doors stay locked.
-Driver rear door window retainer is broken
-"D" light is out, because Toyota.

Whew. What a list.
I wonder if the PO was a DIYer because per toyotaowners.com this truck was taken to a toyota dealer only once in its life after it was sold. The carfax just shows oil changes. Yet it has a seemingly nameless radiator and cap with green coolant, and the AC lines are Goodyear brand, not OEM. So hopefully it'll be cold in the summer. 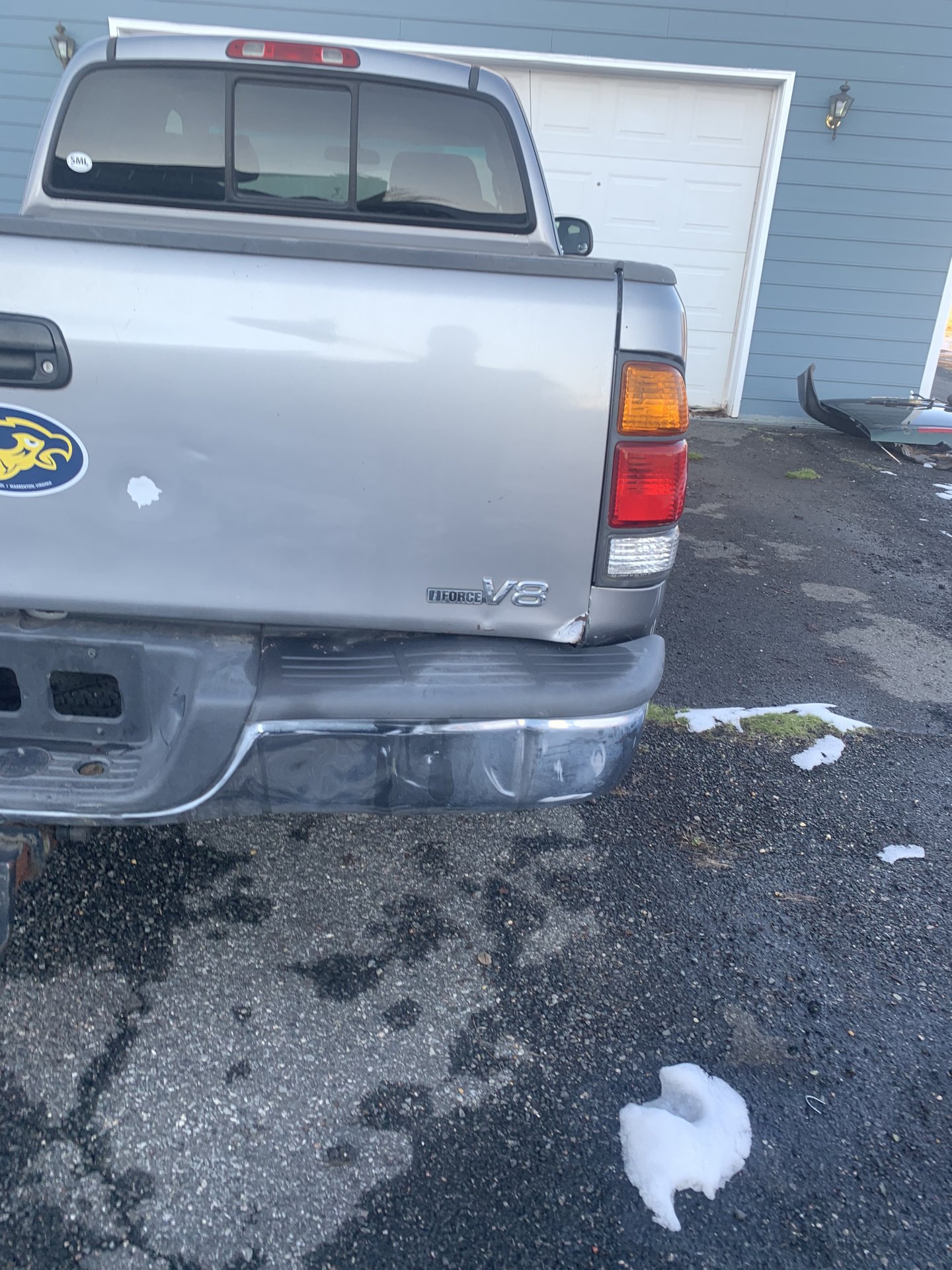 Flip down center console cup holders. For reference the one with no liquid has been sponged out- I filled htem both with mr. clean all purpose cleaner, which is a light green: 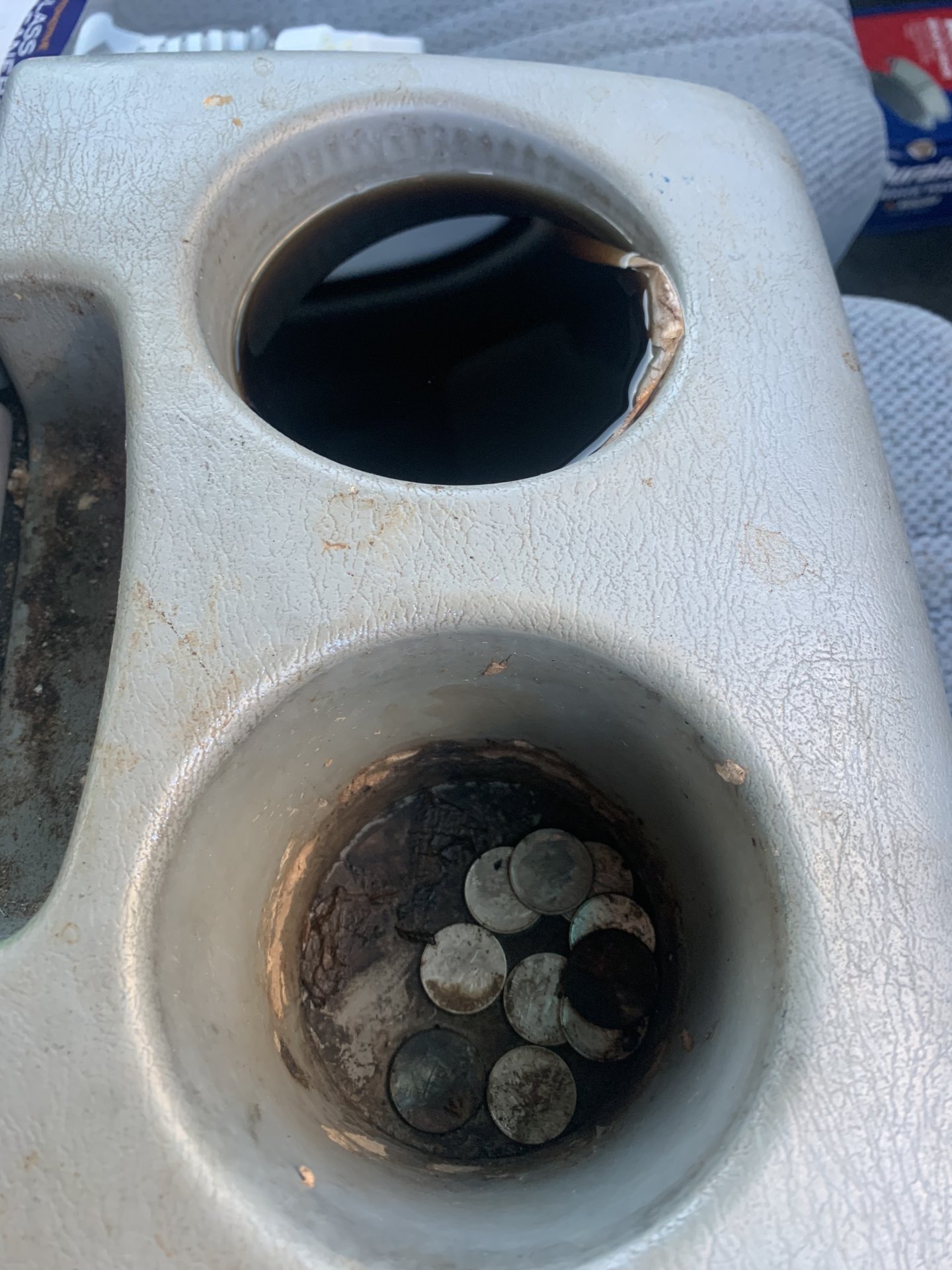 Side of the drivers seat is just dank and the console lid is awful: 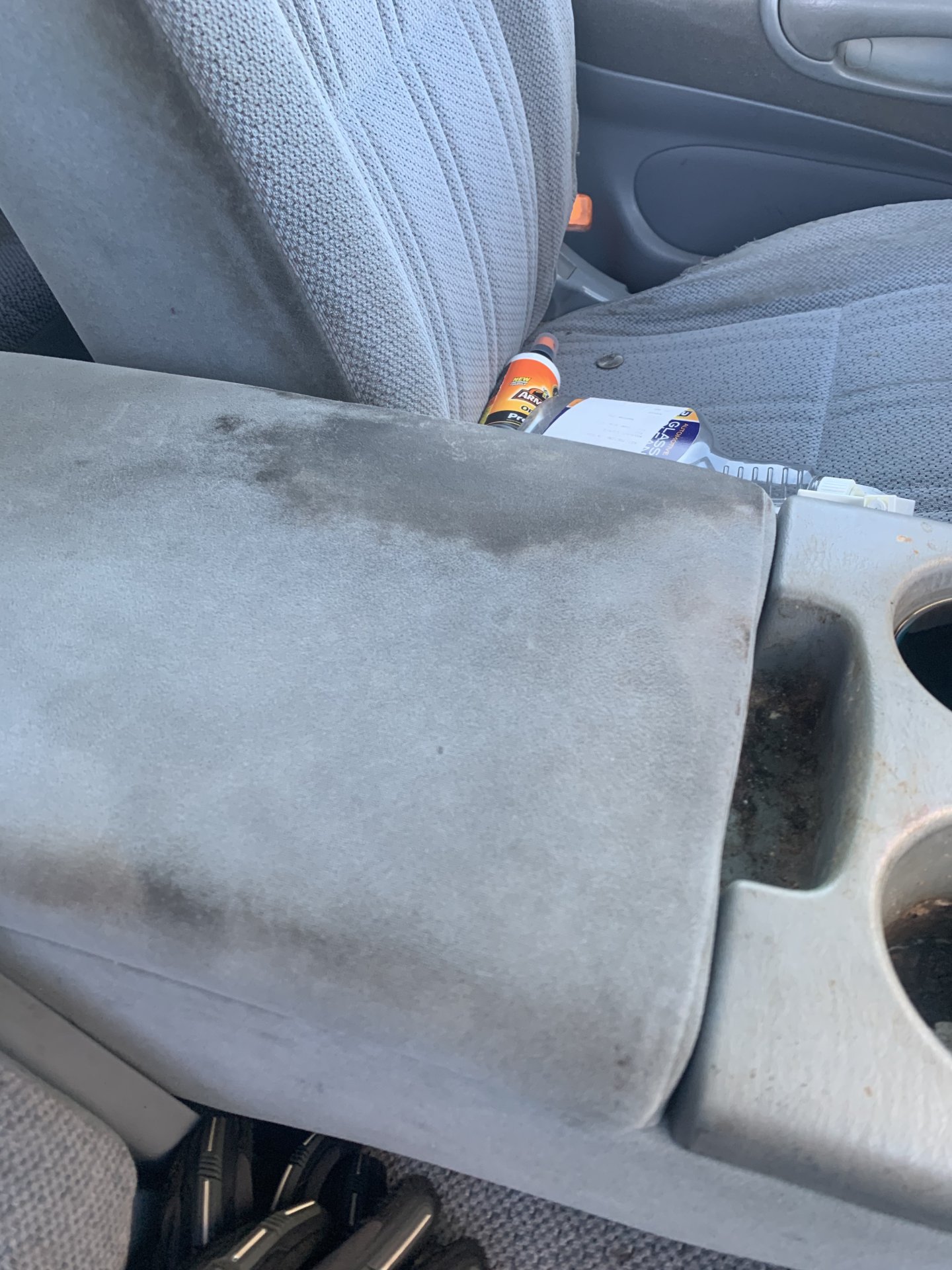 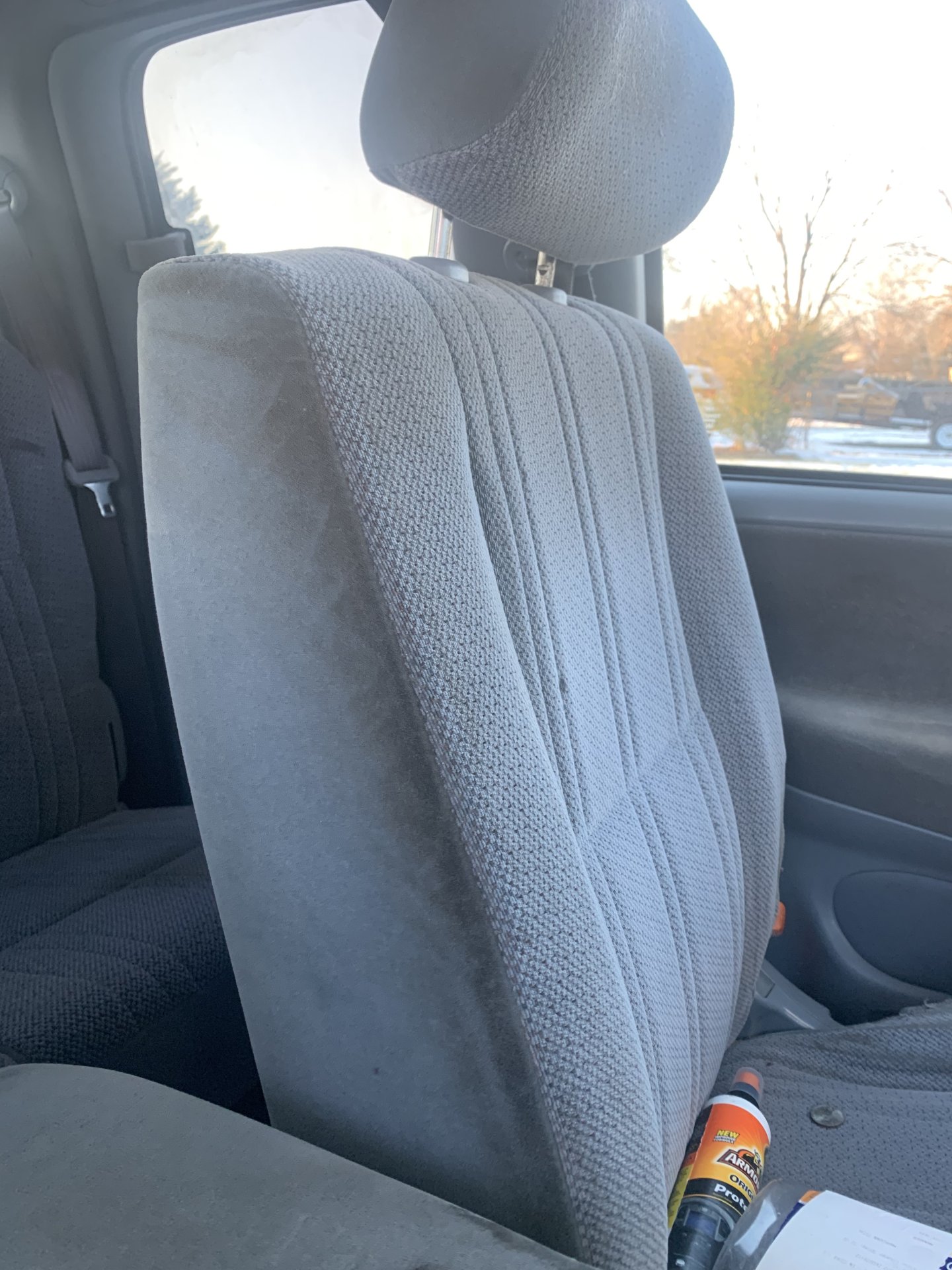 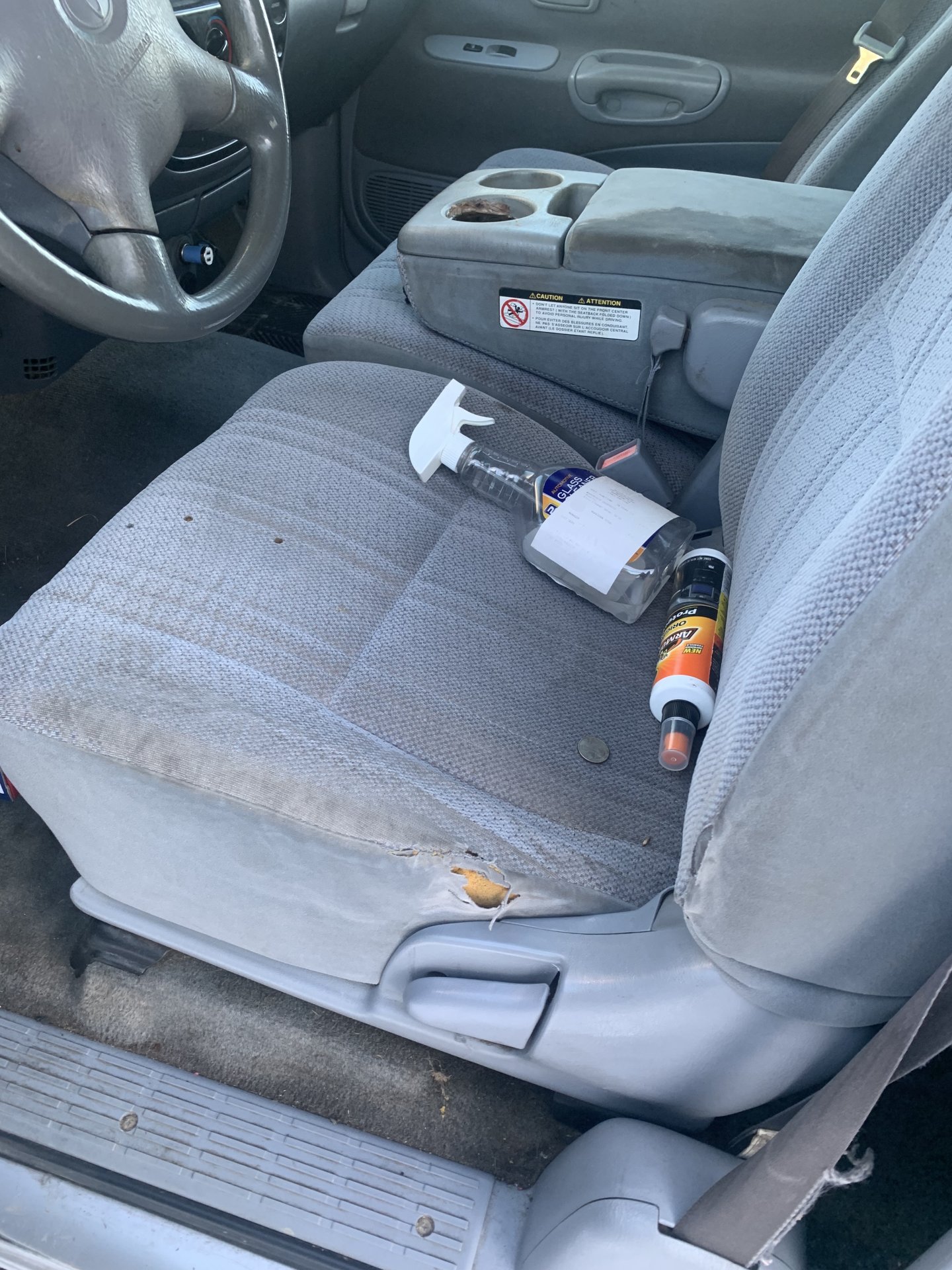 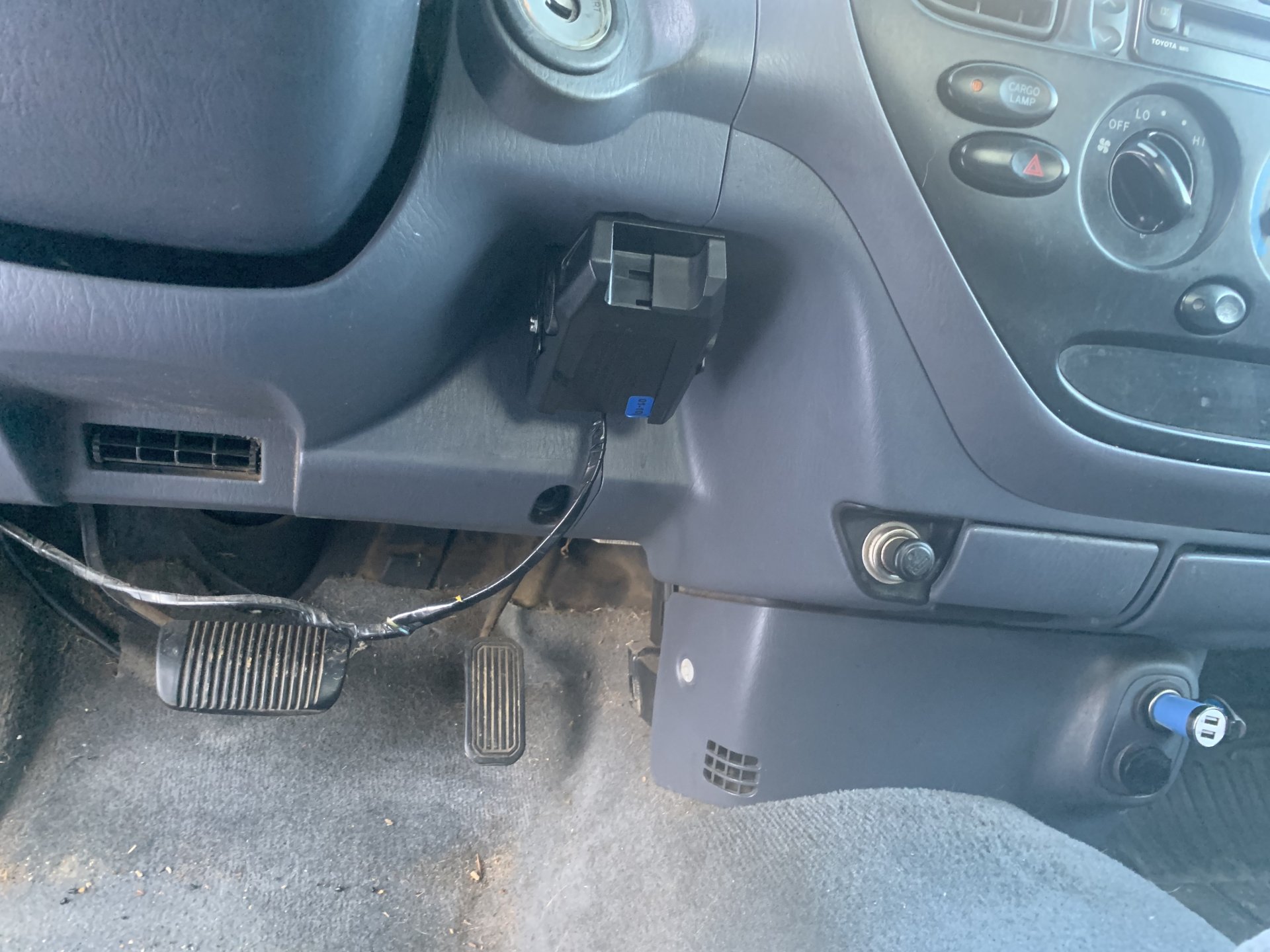 One of my favorite parts- the front part of this frame is so clean: 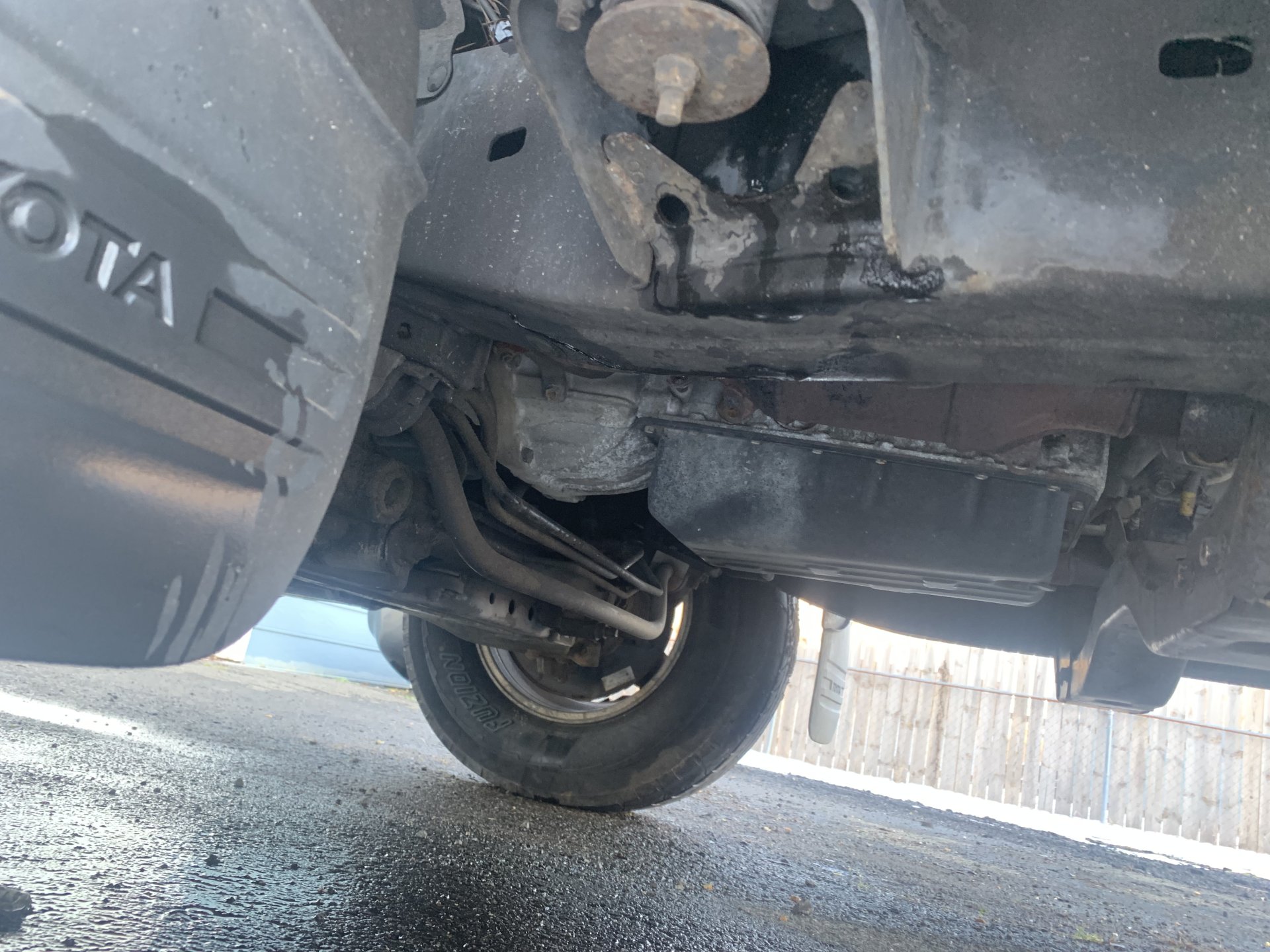 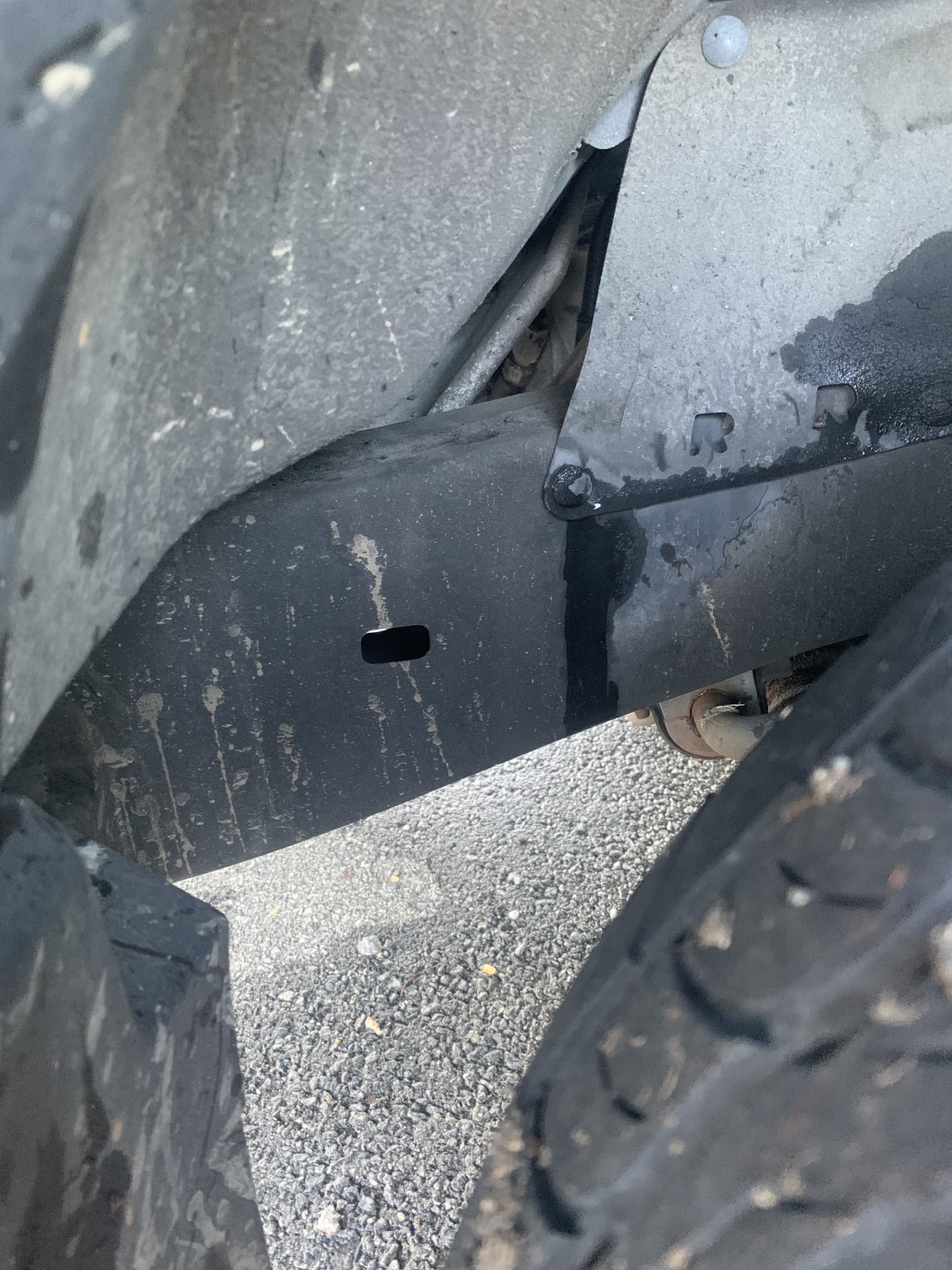 All of the tires are this bad, normally I will drive dry rotted for a little but these are absolute misery, surprised they didn't disintegrate: 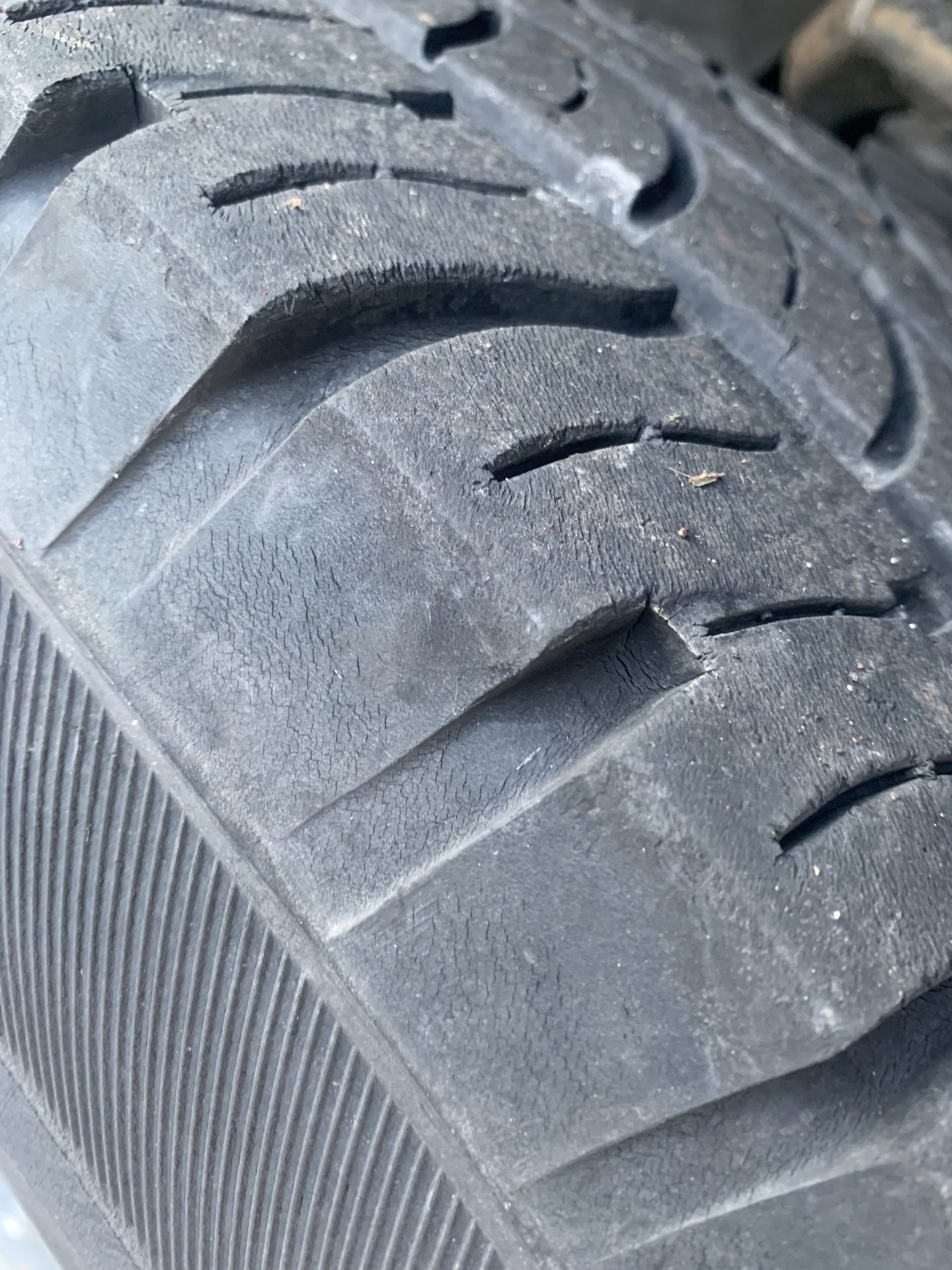 Front end fun- that sway bar link tho, driver side is the same: 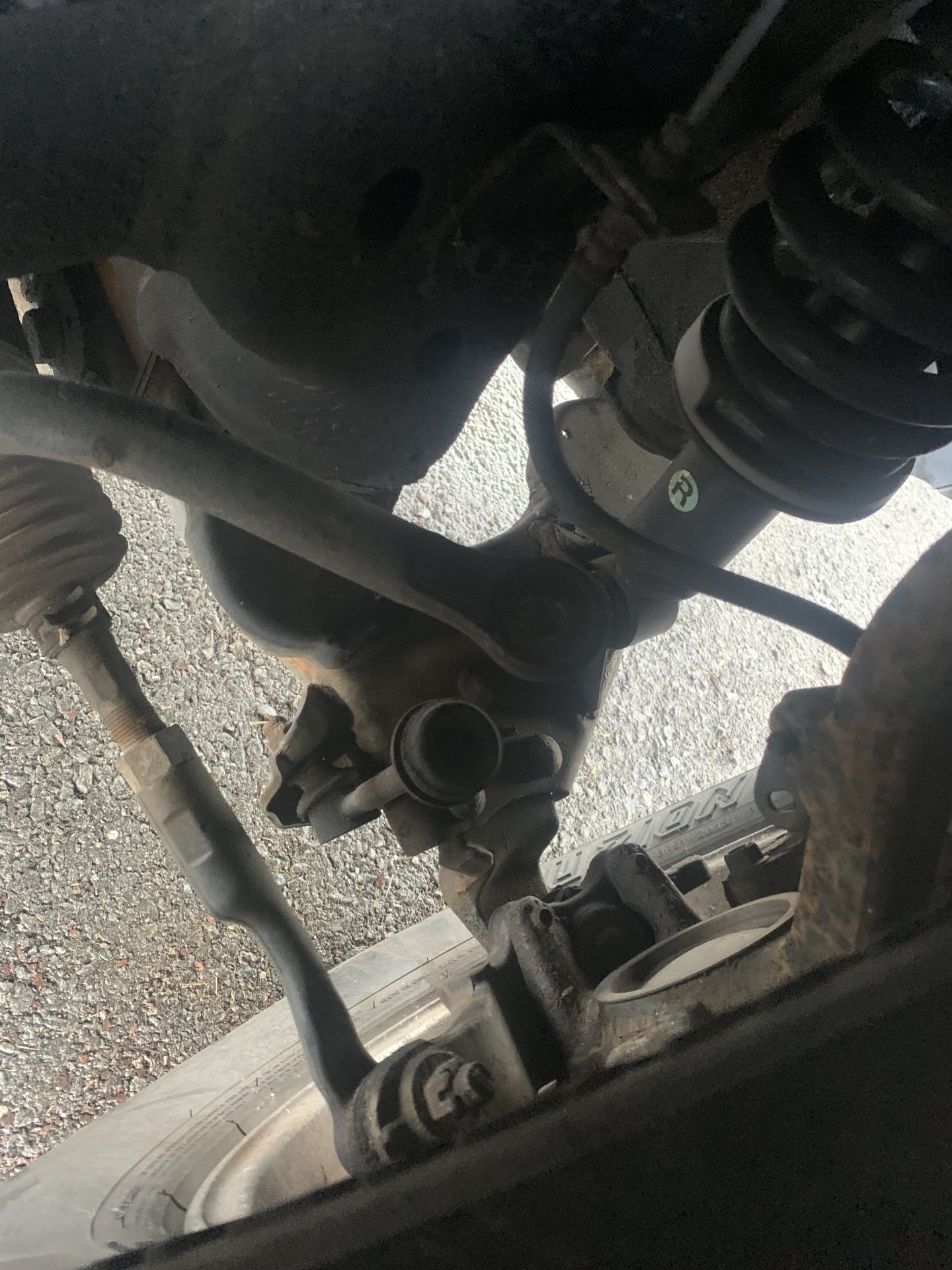 Man, for me that's a truck I'd have passed on, but I look forward to seeing what happens when it gets the love it deserves.
F

I considered it, but at the same time I figured why not? It'll take some love but so far it seems to be mechanically sound in regards to the drivetrain. I view it no different than when someone finds a cruiser thats been neglected or just not maintained and pours love into it.
-1999 Hundy 306k in need of some lovin
-2001 Tundradaily, 285k 2wd and rust mods
-1984 FJ60: Father (landschooner)'s truck- begging for mercy
Gone 1994 4Runner ,2000 Hundy, 2000 Discovery II, 2000 ES300

D21FJ60 said:
Should've mentioned, if you want to see something that was worth passing on, check the thread for Crusty in my signature.
Click to expand...

I see that you are someone who does not learn from their past mistakes. This should make for a good read when you get going.

I know exactly who won't be interested in my "Lived it's entire life in Texas" rust free 80 when it goes up for sale. No challenge for you there.

gixxerjasen said:
I see that you are someone who does not learn from their past mistakes. This should make for a good read when you get going.

I know exactly who won't be interested in my "Lived it's entire life in Texas" rust free 80 when it goes up for sale. No challenge for you there.
Click to expand...


You may be right, but keep in mind he no longer has a Ford conFusion in his driveway. That in itself is a major win!

joseywales said:
You may be right, but keep in mind he no longer has a Ford conFusion in his driveway. That in itself is a major win!

D21- That’s a great truck once you get it tidied up. The smoke smell would be my biggest concern.
Click to expand...

Had three minutes today and put the new single beam blades on. Better for more even wipe.
Ignition lock let me start the truck so I drove it around the back work area to keep things moving. I’ve now realized how small this truck is after driving my cruiser a bit recently 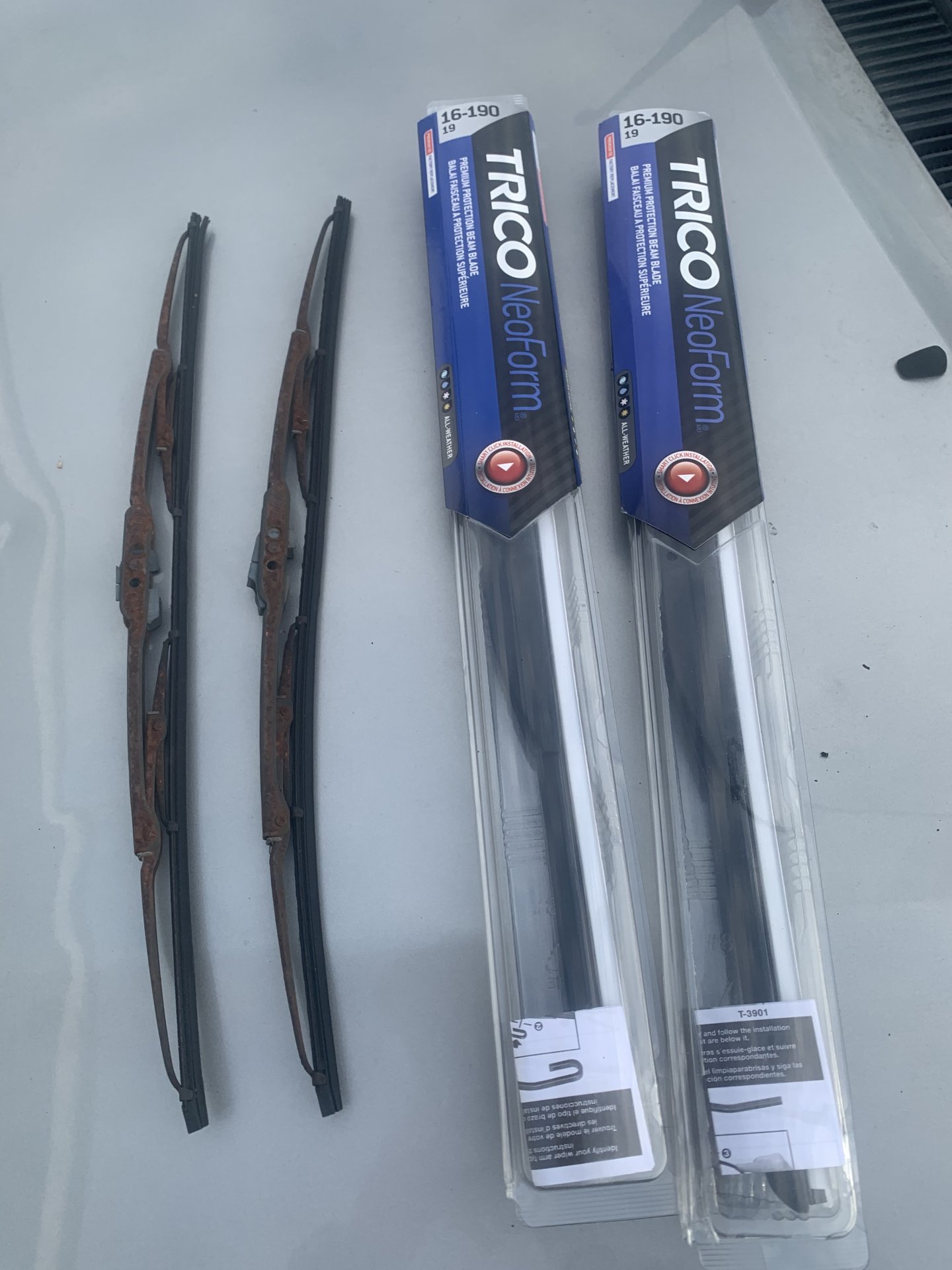 Monkey'd with some low hanging fruit today when I had a few.

Moved the brake controller wire out of the way so it wouldn’t potentially catch on my foot: 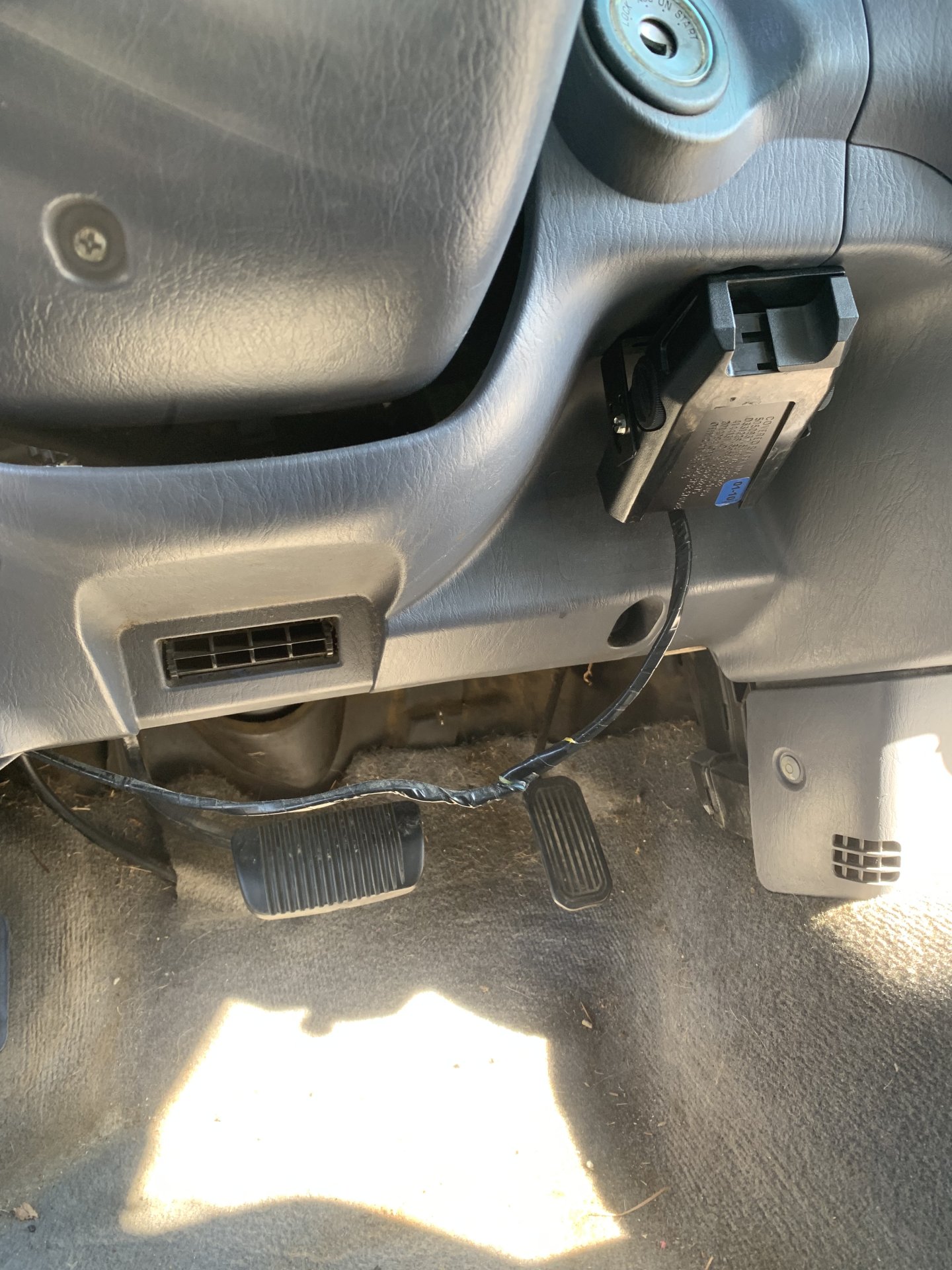 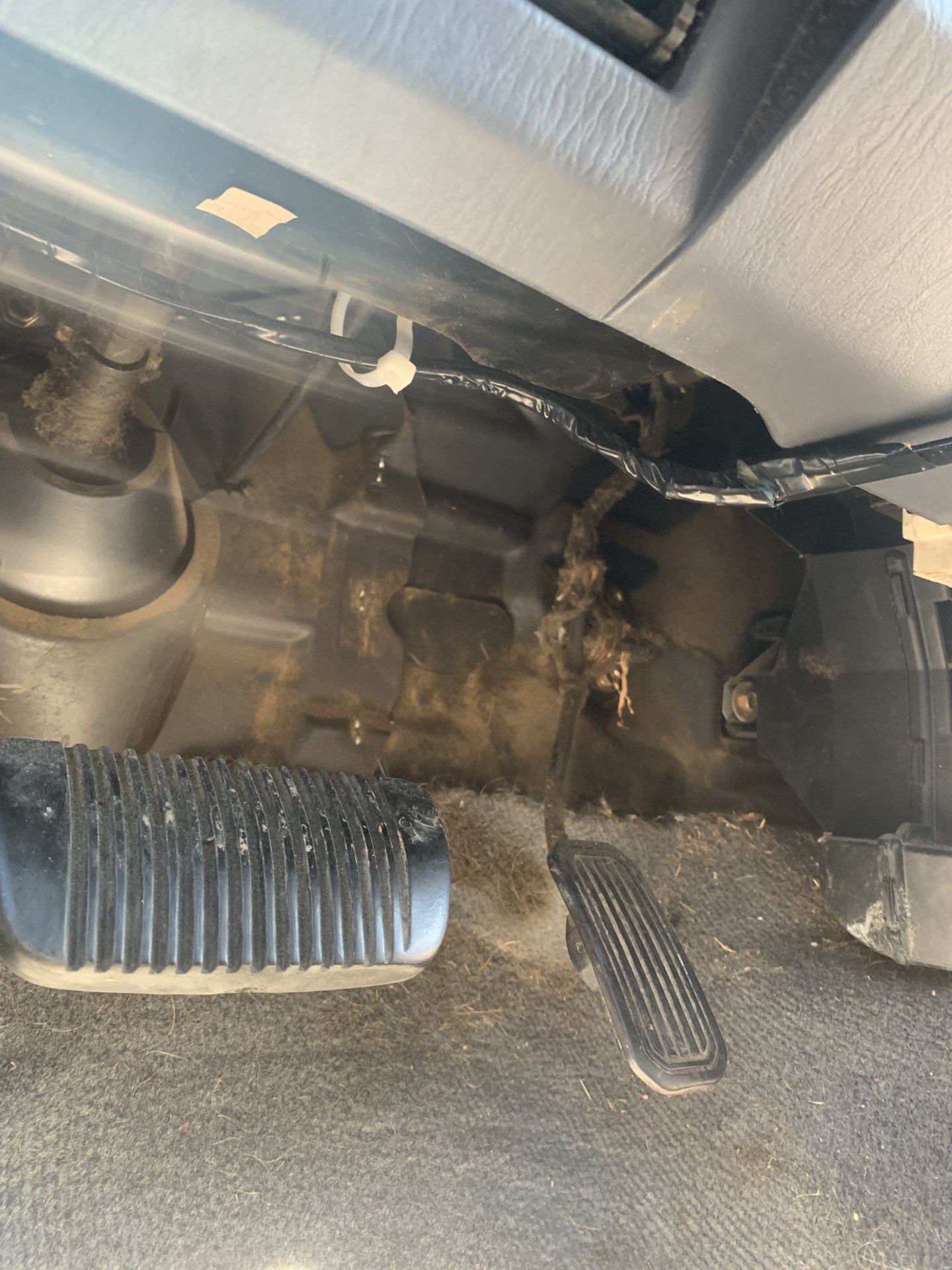 Soaked the rear door latches that kept sticking in pblaster lube, seems like it fixed the problem: 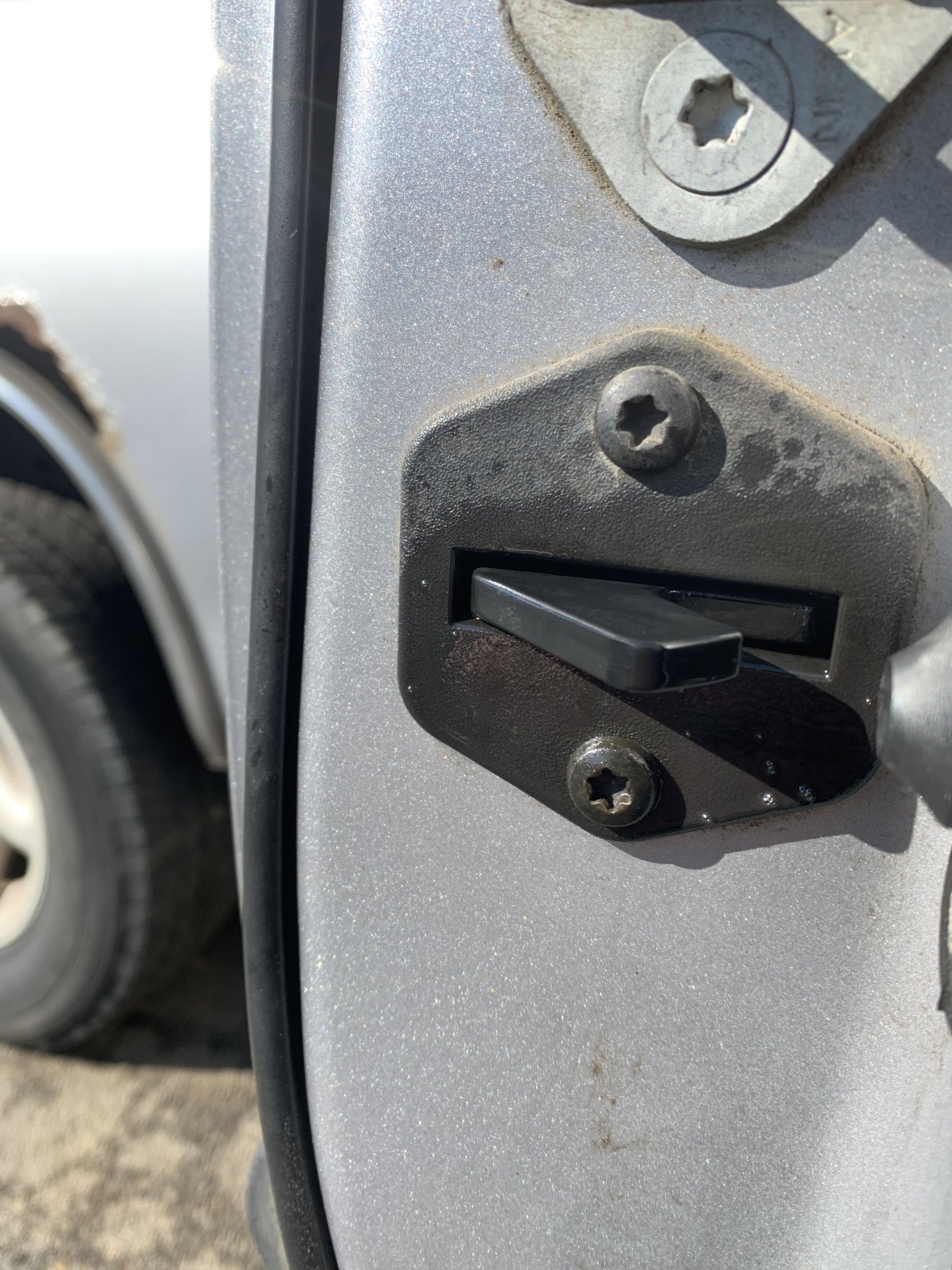 Went to put in the extra h7 I had bought to use in Crusty, found I need to get a new tie down and someone had smashed and wedged tight a new terminal on the positive side:
Note to self 744040C010 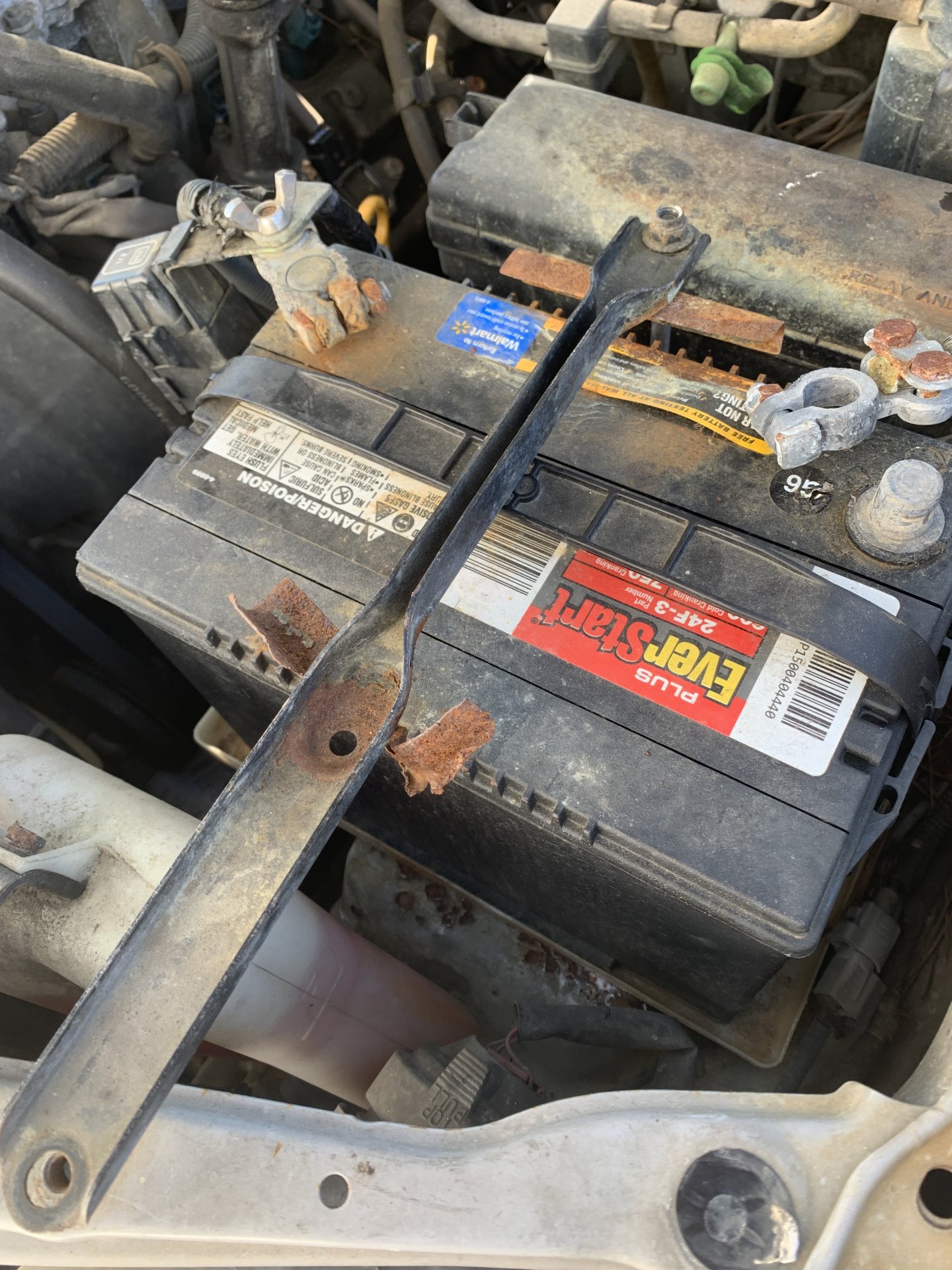 Sprayed a second coat of rustoleum on the tow hitch for aesthetic, curious if it'll dry properly given how cold it is out: 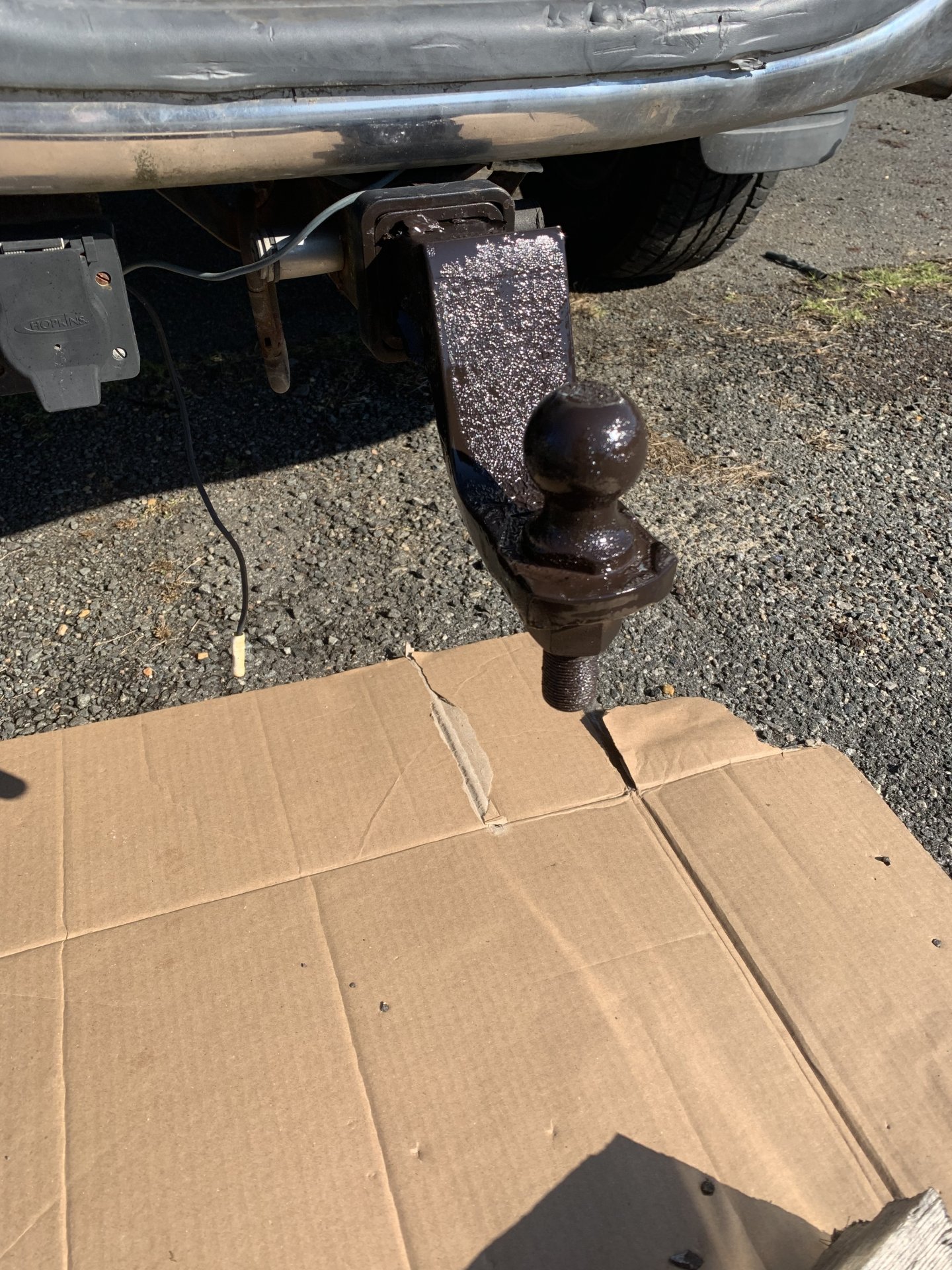 note to self:
bed tie down bolt PN:

Found some time today to work on the truck.
Found out why it was having a hard time stopping: 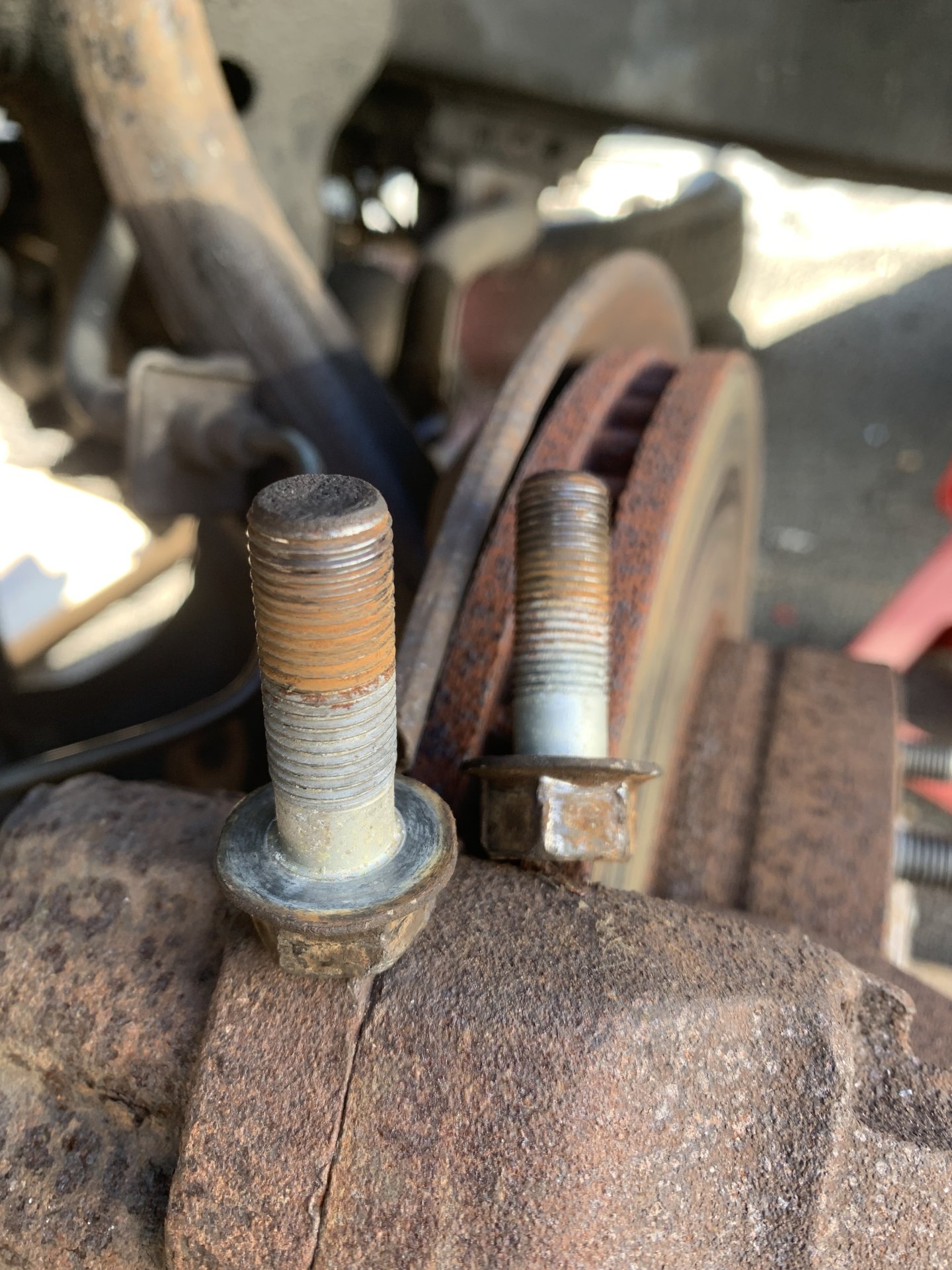 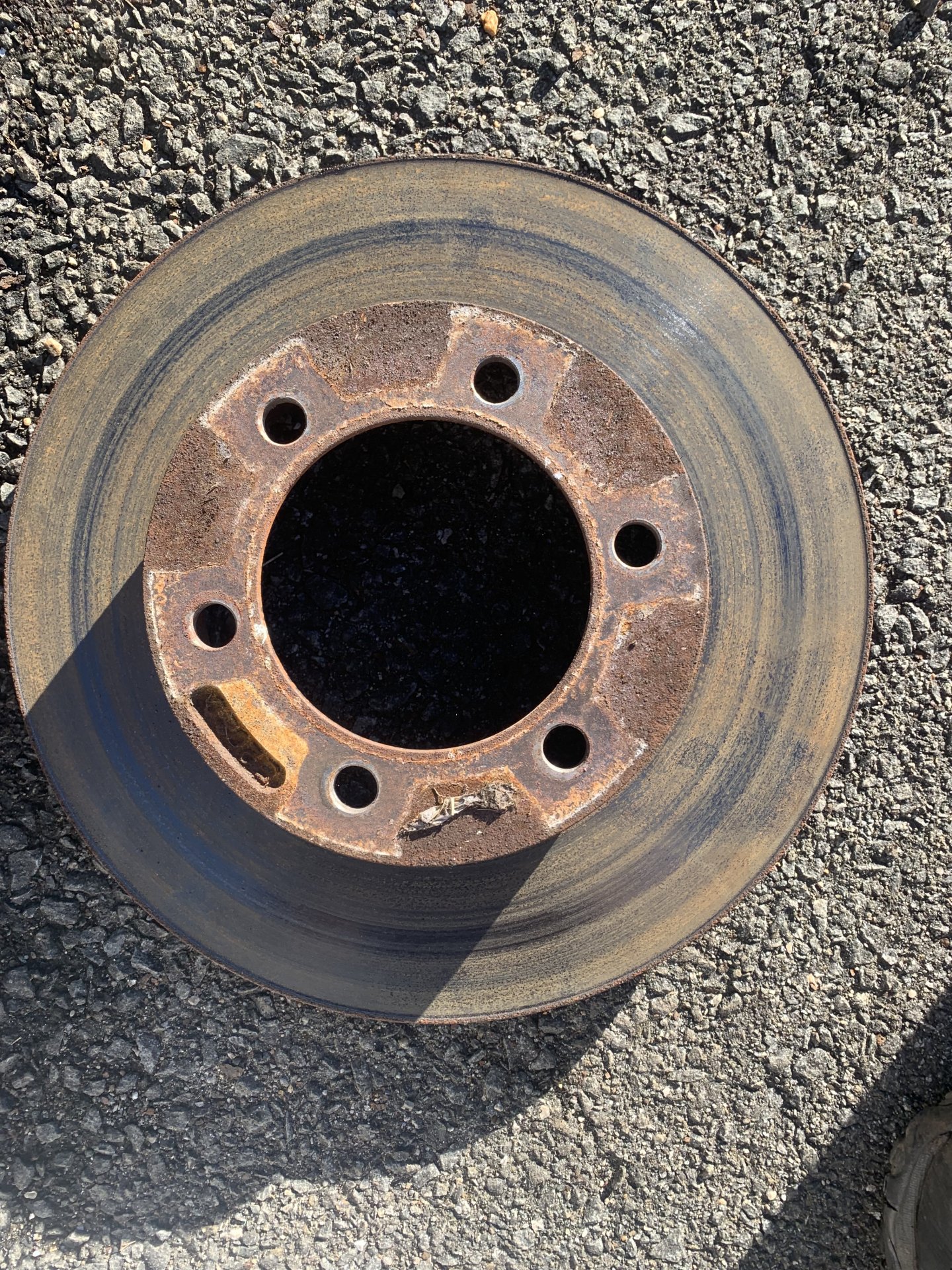 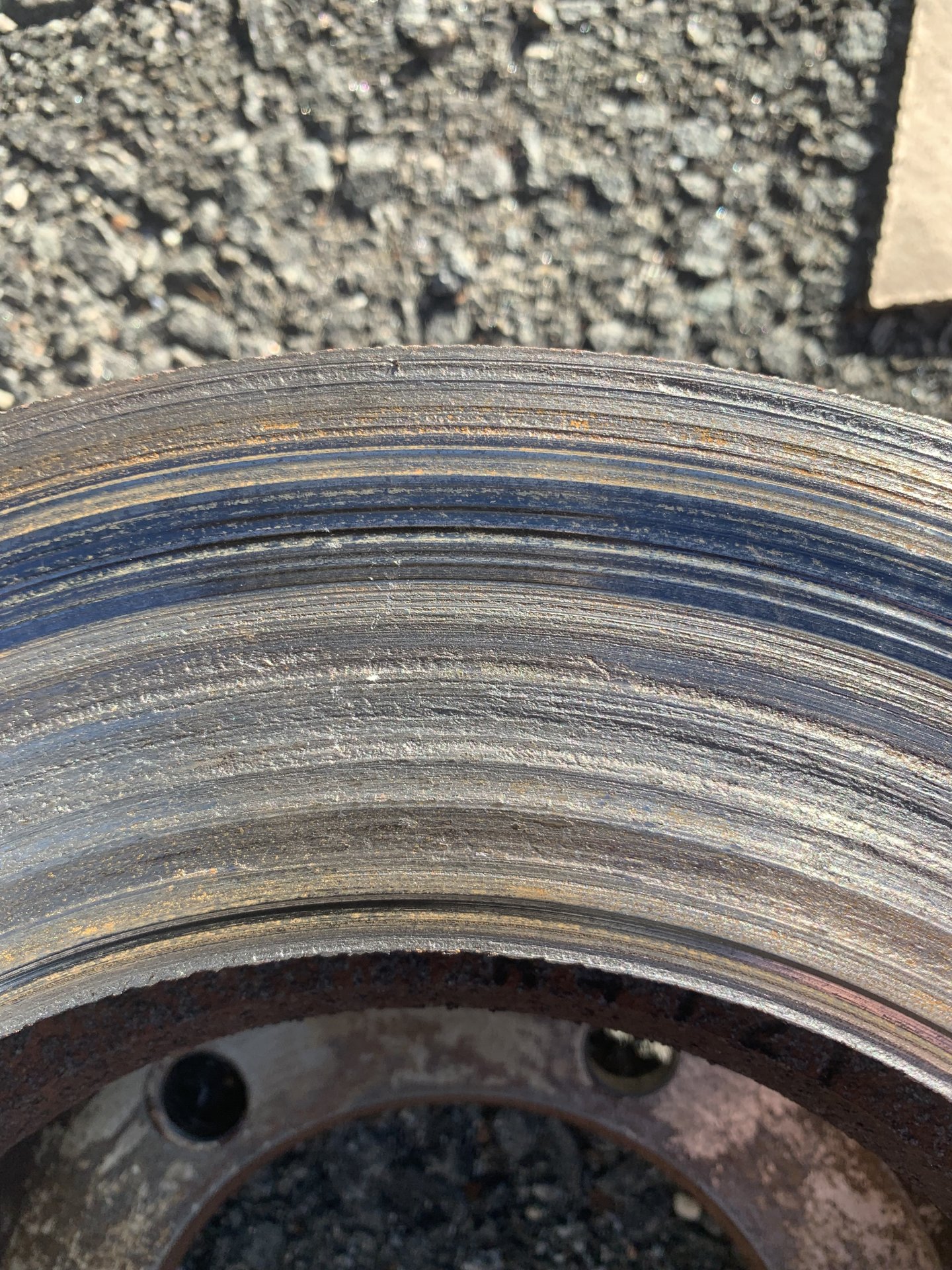 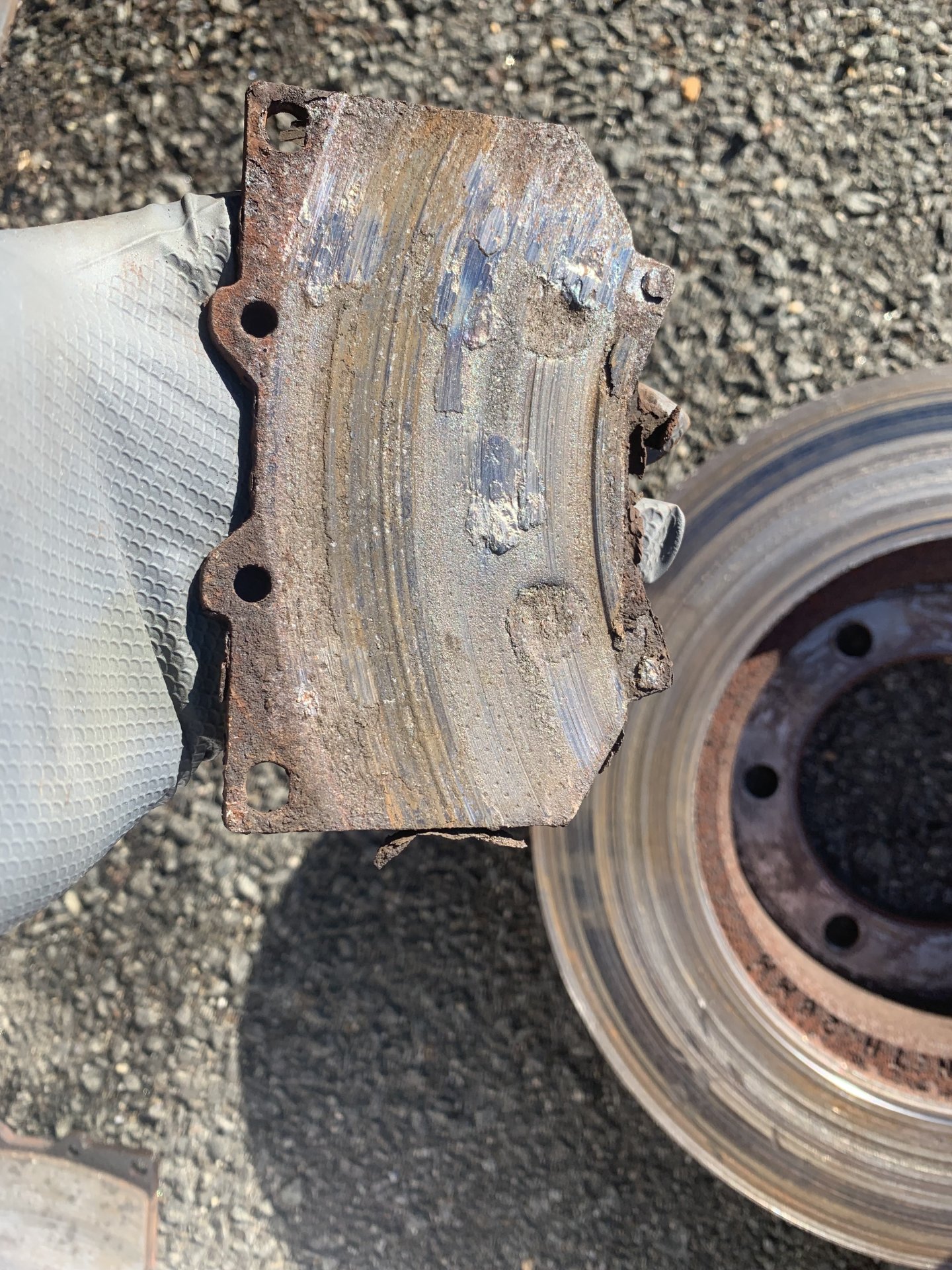 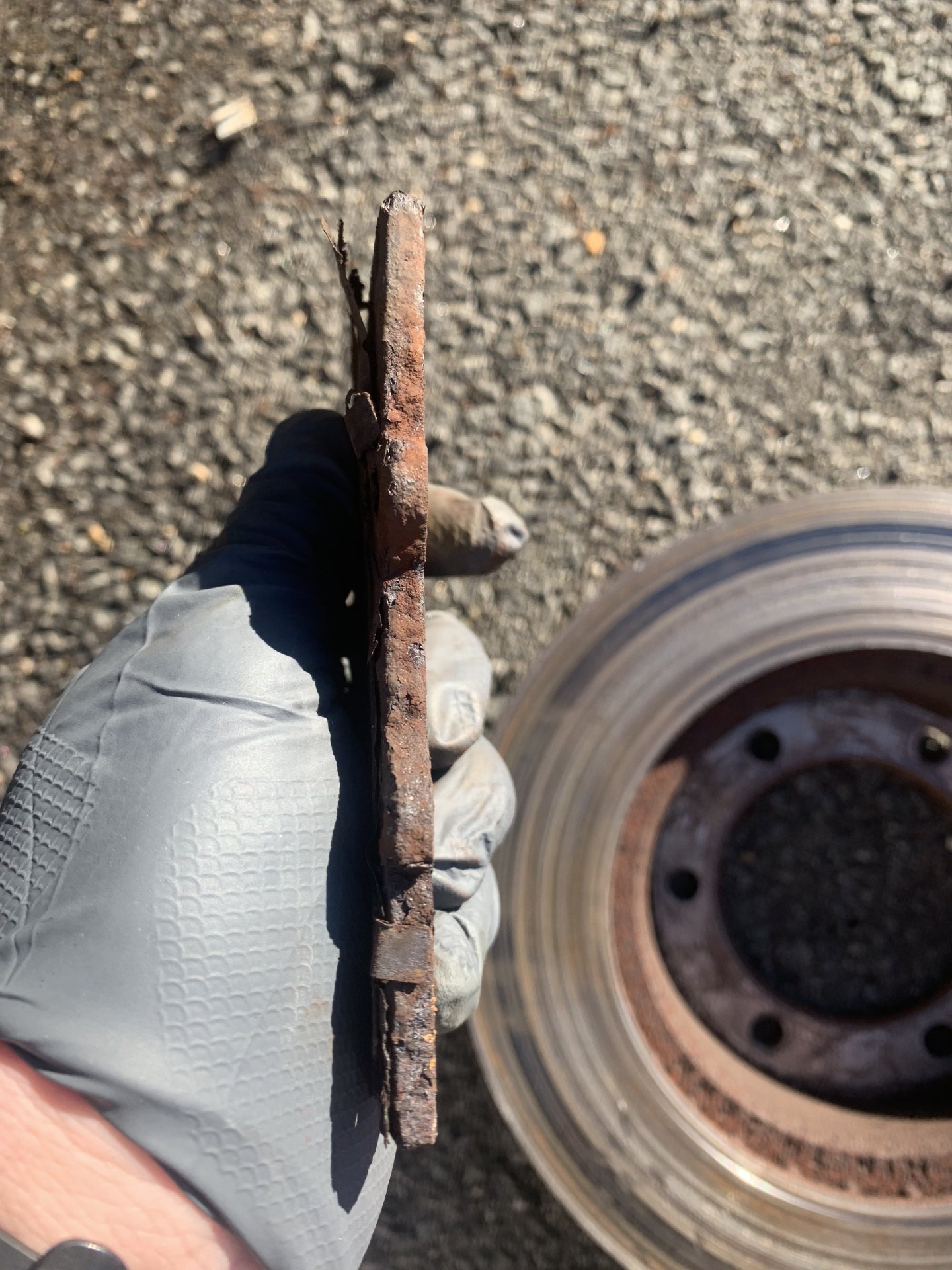 Who hauls a truck camper in their Tundra?